“AUDAX VESPANDO IN TURIN AND FRANCE - MORACI ARMANDO MEMORIAL”: A RIDE OVER PLAINS AND MOUNTAINS, CLIMBING ALL THE WAY TO 2,800 METRES ON VESPA 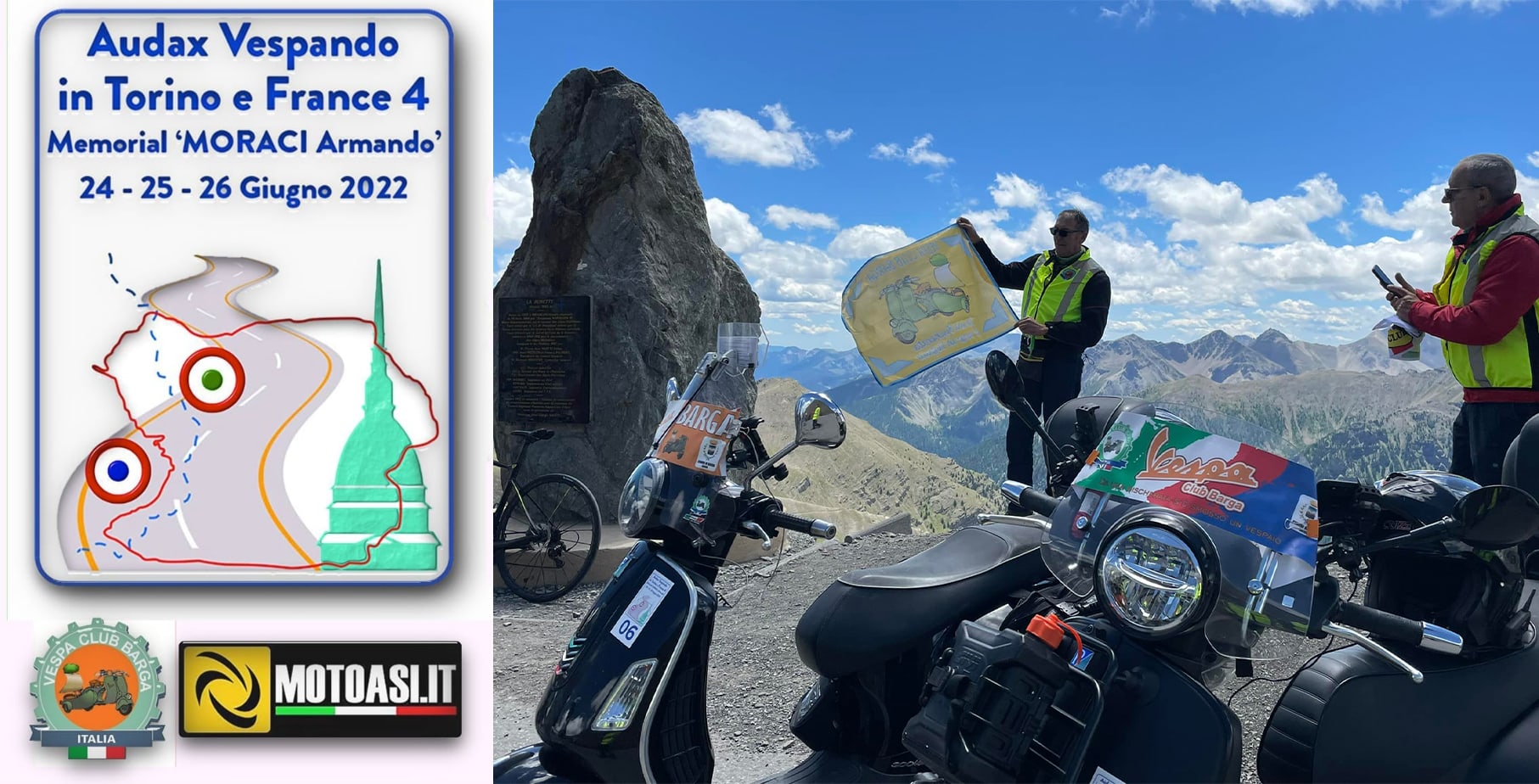 July 2022 – Vespista Sergio Moraci thought of a great way to remember his father Armando, organising an “audax” Vespa rally every year between Piedmont and France. The event is called “Vespando in Turin and France – Moraci Armando Memorial”, now in its fourth edition. And here is the report of the Vespa ride organised by Sergio Moraci, whom we also thank for the photos.

“In an extremely sunny late June, between Piedmont and the Cottian and French Maritime Alps, the Vespa event VESPANDO IN TURIN AND FRANCE 4 was held. On the 24th, 25th, and 26th, no fewer than 40 Italian Vespisti from many different regions, as well as three representatives from Vespa Club Oostende (Belgium) and 1 representative from Colchester VC Romans (United Kingdom). On Friday the 24th, astride their Vespas, they visited the beautiful attractions of Turin, the first Capital of Italy, rich with important historic and artistic locations and monuments, which pleasantly surprised the participants. In the afternoon, they visited the baroque complex of the Superga Basilica, the Royal tombs of the Kings and Queens of Italy, as well as the monument in memory of the Grande Torino (editor’s note: in memory of the 1949 aeroplane accident where the entire Torino Calcio football team perished along with crew, those accompanying them and journalists). The day then ended in a renowned Venaria restaurant. Wake-up time on morning of the 25th was 5:30 and at 6:15, after the bag lunches were distributed, there was an enthusiastic departure to tackle a demanding, 470 km day. The route was flat all the way to Vinadio (Cuneo province) and then there was a stop to relax and refuel before climbing up to the Maddalena Pass (Editor’s note: Col de Larche 1,996 m, Alpine pass in the Western Alps between Italy and France). Without ever letting up, we rode through the big hairpin turns all the way to the top where countless, primarily Italian bikes arrived. After that, the group headed downward with a few motorcycles following us and we pressed on because we were still only at the beginning. After a demanding descent with breathtaking scenery, a brief flat segment and the attack was launched on the mountain par excellence, the Col de La Bonette 2,802 m (Editor’s note: mountain pass in the French Alps, over the highest paved roads in Europe, located in the Parc Nacional de Mercantour).

The climb was hard, but time was on our side. The turns are U-shaped, there are no side guards, and speeds are around 40-45 km/h. Our Vespas have no fear. They climb without missing a beat, all around an almost lunar landscape, with cliffs over 1,000 m high, where there is no room for error. But our vehicles make no mistakes. Little by little, our Vespas eat up the asphalt until arriving on the mountaintop where everything below seems so small. Once at the top, the effort and fatigue are rewarded with brisk, but warm air, uncontaminated nature, and the view of all the other peaks beneath us to infinity – a reward for us and for our Vespas. We stop for the compulsory photos and someone – like the president of VC Barga – wants to climb even higher, riding his Vespa higher than all the rest, with the machine forced to submit.

Final recommendations were given for the descent, fantastic but demanding for our vehicles which could have had problems with overheating brake fluid, but instead everything went well. We stop for a break in Isola, and then we're off again headed to Isola 2000 (Editor’s note: ski station in the French municipality of Isola, Maritime Alps) and the Lombardy pass with its 2,350 m (Editor’s note: this is the pass that connects the Italian side of the Maritime Alps to the French side, specifically to the ski station of Isola 2000; upper Stura Valley).

“Three days, three rather demanding passes (the Maddalena/the Bonette/the Lombardy), a total of 835 km, new and old friends: this is Vespando. Until the next adventure and thanks to all for the wonderful days spent together!” Comments and photos above posted on the Vespa Club Barga FB page:
www.facebook.com/groups/459704410764455

The bold participants of Vespando 4 begin the climb to the final pass, which is reached easily. Very few cars at the top, a few brave cyclists, just a few motorbikes, and our Vespas. This last pass is also overcome, followed by an extremely demanding descent, with the road no wider than 3.50 metres. Our Vespas handled this descent at a good pace without any problems, reaching Vinadio where we stopped to refuel and take a break. We still have 140 km of flat terrain left going through Cuneo, Savigliano, and Moncalieri to arrive at our starting base which is Venaria Reale (province of Turin). And the second day, the most demanding one, was well spent.” 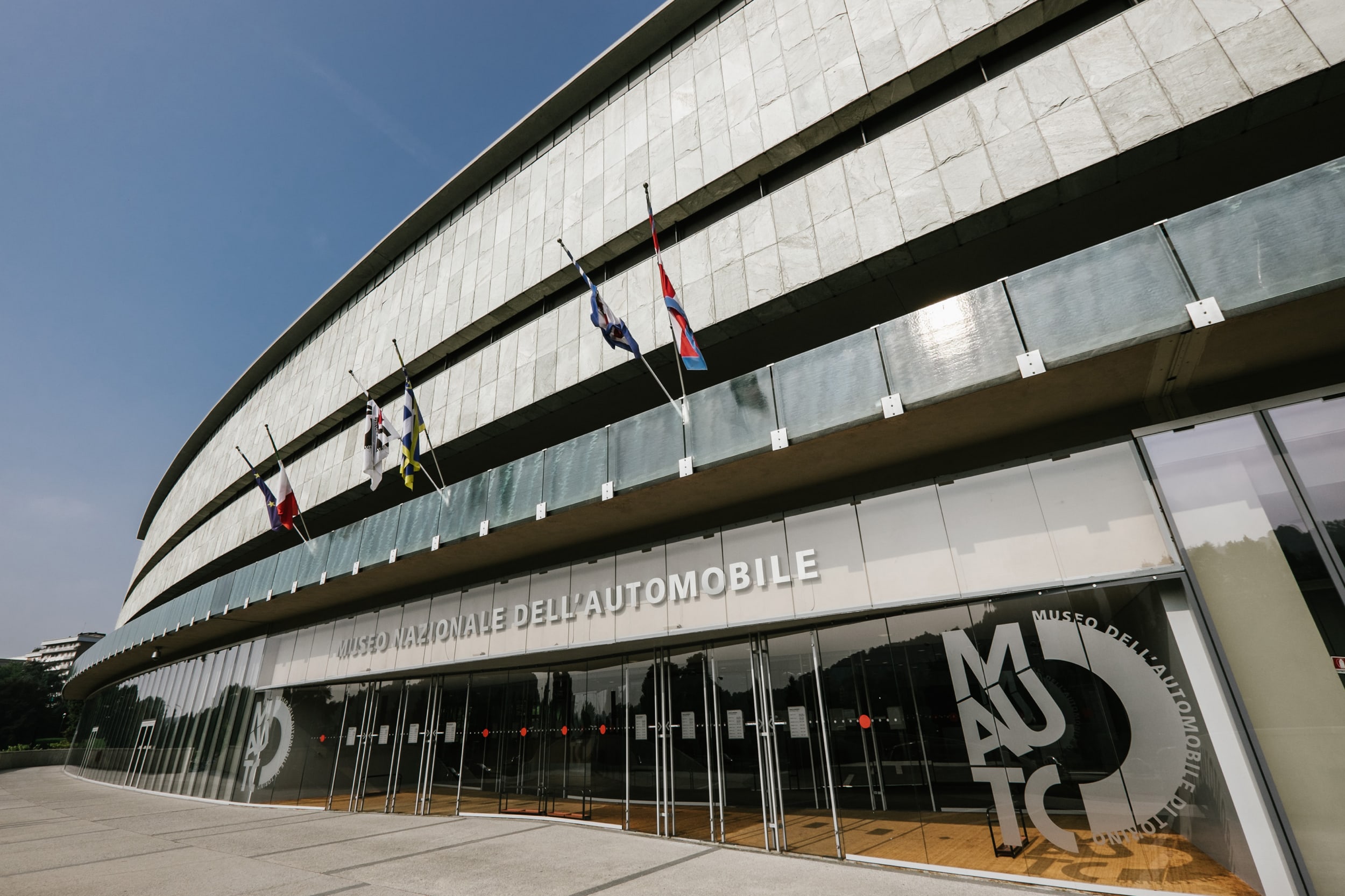 MEMORIES: THE VESPISTA FROM MESSINA WHO WENT ALL THE WAY TO TRIESTE… “The Sunday of the event was dedicated to culture. Everyone rode their Vespas to visit the National Automobile Museum of Turin; then there was a banquet lunch with the presentation of the “Memorial MORACI Armando” trophy to VC Sermoneta (province of Latina), participating with 9 members. When the awards were presented, the participants were reminded of the figure of MORACI Armando on the occasion of his one-hundredth birthday. In October of 1954, on the occasion of the Trieste national rally organised by Vespa Club d’Italia to celebrate the return of the city to Italy, Armando, the ‘inspiring father’ of the ‘Vespando in Turin and France’ events, took a suitcase where he placed his finest suit, tied it down to his Vespa U, and departed from Messina headed for Trieste where he arrived 12 days later, travelling the dusty roads of that era at a speed of 20 km/h, riding for 12 hours a day. Armando Moraci participated in the Trieste rally dressed to the nines with brilliantine in his hair. And, on the occasion, he worked his way through the crowd of Vespisti to greet the then-President of Vespa Club Italia, Renato Tassinari. When he finally reached him, he shook his hand and told him that he had arrived all the way from Messina.

Tassinari asked him how he managed to make it all the way there and he told the story of his undertaking (accomplished thanks to sacrifices and savings of a year of work) … The President of VCI was astonished… He asked for a sheet of paper and a pen and wrote, ‘Italian dealerships who provide room and board to this intrepid Vespista will be personally reimbursed by me.’ My father thanked the President, but he didn't even have the strength to ask him to take a keepsake photo with his Kodak. He took the sheet of paper and, shortly thereafter, left on his return trip to Messina. However, he wanted to see if the Piaggio dealerships would really provide him with accommodations along his return trip to Sicily and he had a wonderful surprise: the Piaggio dealerships, besides providing him with accommodations, celebrated him along with other local Vespisti. Many years have passed, and my father is no longer with us, but I wanted to remember him because this is still the spirit that guides me in organising the small event VESPANDO IN TURIN AND FRANCE. In closing, I wish to thank all the participants, the sponsors POLINI MOTOR, GIVI, GM accessori of Gela, RDM scaffali metallici of Turin, YAMOTO of Ivrea Banchette, locanda Martelletti of Cocconato d'Asti, b&b Lucio D'La Venaria, ARCADIA EXPRESS of Turin-Gallarate, Panificio Grugliaschese, Mr BOTTO Danilo, and the Municipality of Venaria Reale. A WARM EMBRACE TO YOU ALL! VESPANDO 5 WILL BE BACK FROM 30 JUNE THROUGH 1-2 JULY 2023.” SERGIO MORACI

Other images of Vespando 4 on the Vespa Club Barga website:
www.vespaclubarga.com 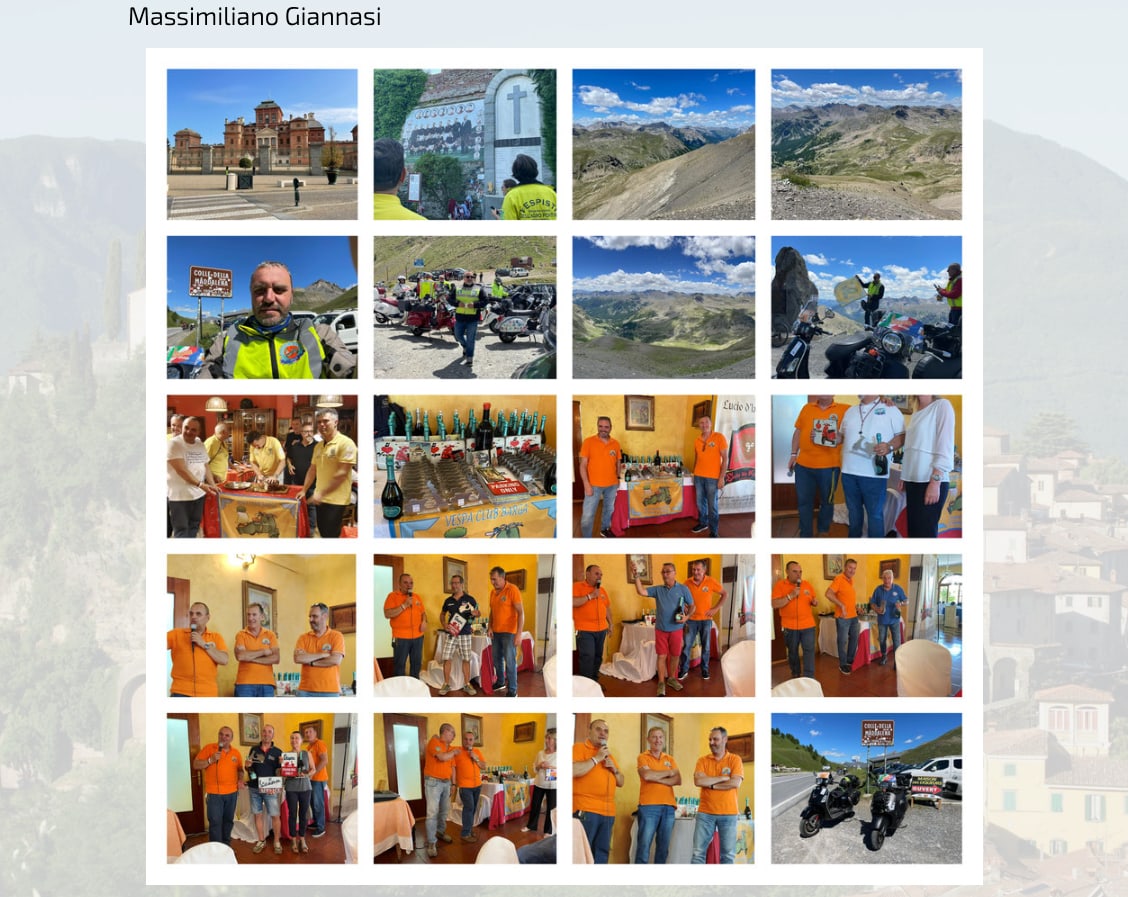