THE “GRAN CIRCUITO DEL SESTRIERE” IS BACK, THE TENTH INTERNATIONAL VESPA TIME-TRIAL RE-ENACTMENT

150 RIDERS ASTRIDE FANTASTIC VINTAGE VESPAS (FROM 1947 TO 1976) ON THE MOUNTAIN ROADS. NICOLA GIACOMINI DOMINATES THE OVERALL STANDINGS ON A VESPA GS 150.

24 July 2021, Sestriere (Turin, Italy) - The “Gran Circuito del Sestriere” is back, the tenth edition of the time-trials re-enactment organised by Vespa Club Pinerolo, after skipping last year. The year 2021 was the restart edition for a large number of Vespa enthusiasts who participated in the “turistica internazionale a media imposta, che rievoca la competizione motociclistica storica del 1947-1953” (international tour at set average speeds, which re-enacts the historic motorcycle competition from 1947-1953).

For the Sestriere event, held on 23 and 24 July 2021 on the demanding hilly streets, spectacular scenery and charming historic villages (and enjoying the speciality cuisine of the territory), Vespa models were admitted with first production year from 1946 to 1976, divided into various categories: Faro Basso; 8-inch Wheels; 10-inch Wheels; Standard Sporty Vespa. A spectacular parade to see.

The spry and gritty vintage Vespas put for their best efforts between time checks and ability trials, with timekeepers in charge of recording times and scrutineers, under the supervision of race director Mauro Armando, President of Vespa Club Pinerolo, assisted by club secretary, Enzo Secondo.

VIDEO CLIP: THE SOUND OF VESPA.

An event with the charm of times gone by, so much that any non-sporting use of GPS, helmets with Bluetooth and the like would result in disqualification, as set forth in the regulations of the Re-enactment. The purpose of which is to allow new generations of Vespisti to experience the atmosphere of sporting challenge, where the best part is truly participating and putting oneself to the test, rather than a competitive spirit.

The event was organised in collaboration with Vespa Club d’Italia, MotoAsi, Buriasco Municipality and Vespa World Club, represented at the event by club secretary Marco Manzoli, who provides a complete chronicle of the re-enactment here.
“The tenth edition of the Historic Re-enactment of the Gran Circuito del Sestriere came to an end with the awards ceremony after the gala dinner in the park of the Buriasco Municipality. The forced stop last year and the suspension of all international activities increased expectations for the event if a reason was even needed.

Here are some stats. Participants: 45 Vespa Faro basso, 38 Vespa Sportive (GS, SS, Rally), 153 Riders registered (144 finished the itinerary), 9 nations represented, including Italy, Germany, Luxembourg, Belgium, Switzerland, Sweden, France, Holland, and Croatia; 263 kilometres travelled to complete the event; 2,176 m. a.s.l. was the highest pass (dirt) over the Colle delle Finestre which the vintage Vespas had to tackle; 11,000 m total difference in level; 5 timed sections; 2 passage Stamp Controls for the orientation trial (being a secret track, a hard-copy road book was provided in keeping with the style of the vintage vehicles participating in the challenging marathon).

Location. The outstanding organiser, Vespa Club Pinerolo, chose the spectacular Sestriere Valley of the Olympics. The paddock and starting line were located in the Municipal Park, kindly permitted by the city of Buriasco, just a few kilometres from Pinerolo.

Plenty of wide open outdoor spaces in order to comply with the prevailing anti-assembly regulations. The timed trial in Usseaux was demanding, with 1,200 metres of road closed to traffic before the stop at the Laux Lake, where the Municipal Government provided a bag lunch for all the riders and the staff with local products that were very much to the liking of all participants. 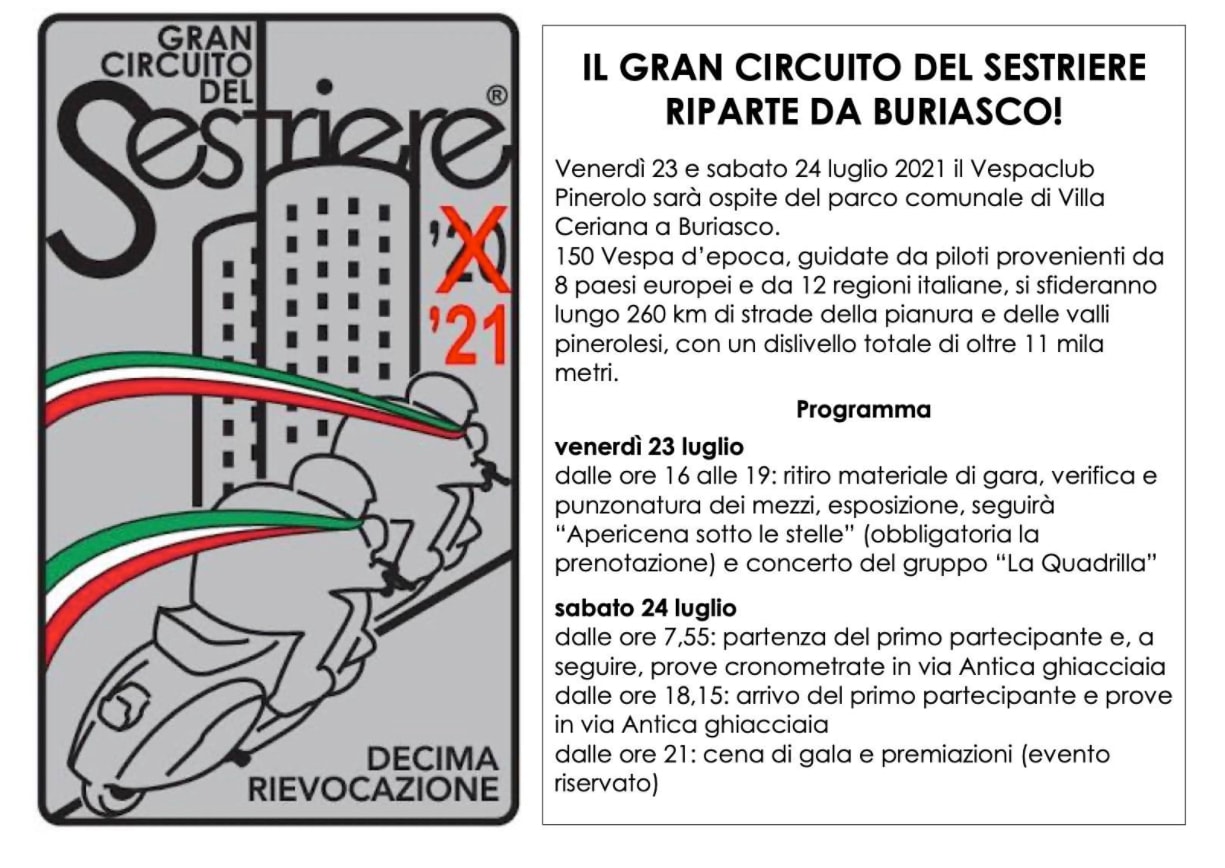 The advert posted on the Buriasco Municipality’s Facebook page.

After the refreshments, the riders resumed the climb towards the Colle delle Finestre with a long section of dirt road that the spry vintage Vespas tackled without any particular problems, demonstrating, if any demonstration was needed, the extraordinary nature of Vespa that allows even 70 year-old scooters to handle off-road routes worthy of much more specialised vehicles. However, the difficulties for the small and untiring Vespas did not end there. The unstoppable riders, after arriving in the spectacular setting of the Village of Balboudet, had to once again put their skills and precision to the test with a hard Special Trial in the uphill alleys of the town that put both riders and vehicles to a difficult test. 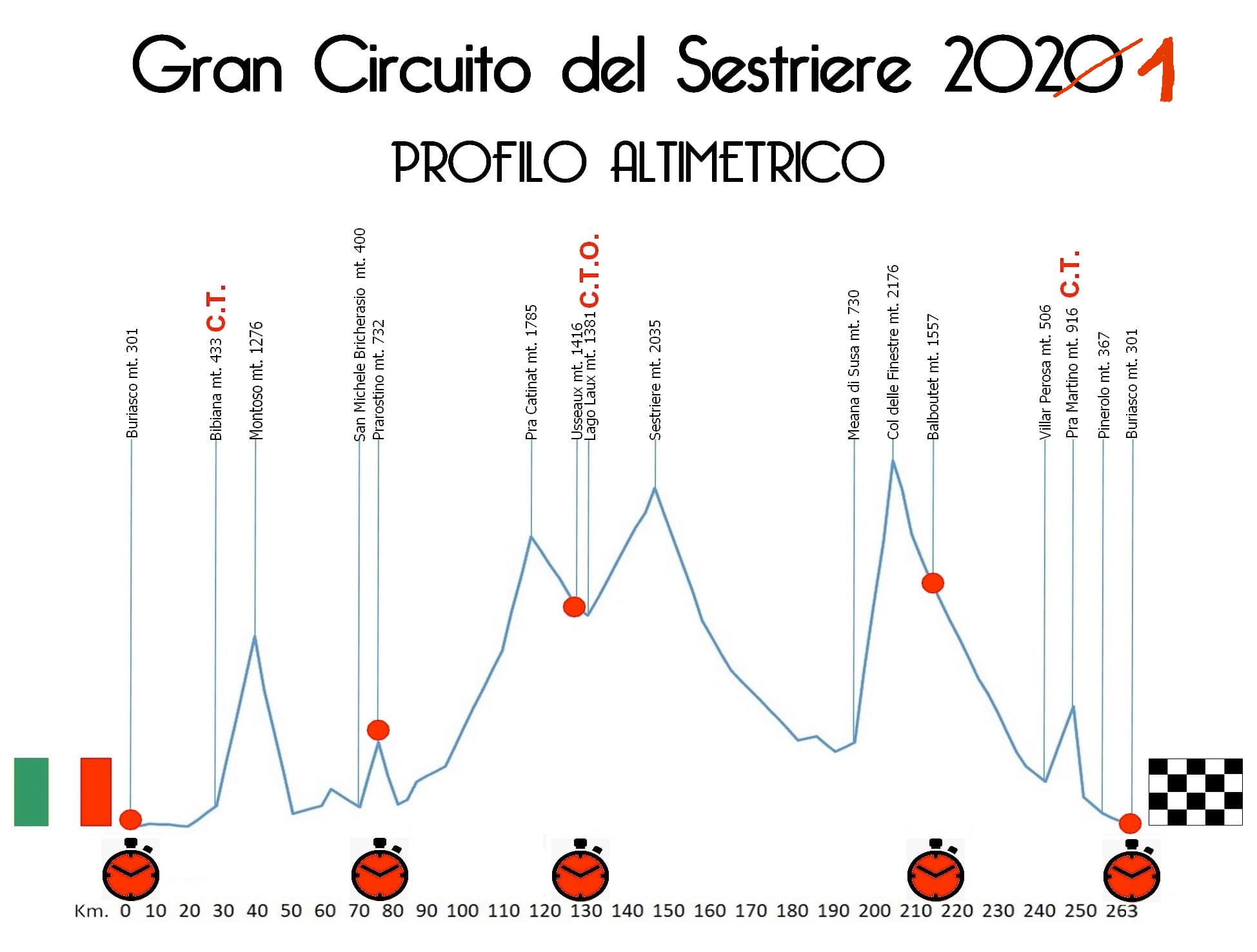 Then, it was off towards the final timed section, admiring the natural beauty of the Chisone Valley and then back to the Buriasco Park where, after the last timed session, riders and companions enjoyed a Piedmontese dinner under the stars, savouring the traditional dishes produced by local farms.

Special thanks to the President of Vespa Club Pinerolo, Mauro Armando, and his staff who pampered the participants and put together an event that will go down in Vespa history. This 10th edition of the Gran Circuito del Sestriere was a perfect re-enactment of the historic motorcycling competition from the 1947-1953 period (editor’s note: at the time, motorcycles and other scooter models other than Vespas also participated), inspiring new generations of Vespisti.

And thanks for their support also goes to the Piaggio Commercial team (in the photos below: the Porter called 'Ulisse' with a Vespa in tow, used by the VWC-Vespa World Club).”

GRAN CIRCUITO DEL SESTRIERE-INFOS, EDITIONS, HISTORY, ROLL OF HONOR:
www.grancircuitodelsestriere.it SPECIAL THANKS TO: Gino Salamone (Vespista from VC Pinerolo, Il Vespino), “field freelance” photographer and video-drone operator, as he defines himself, for the photos and videos in this article and the lateral background images. Photo Credits: Gino Salamone/Vola in alto - www.iculuri.com 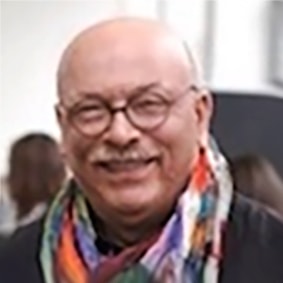