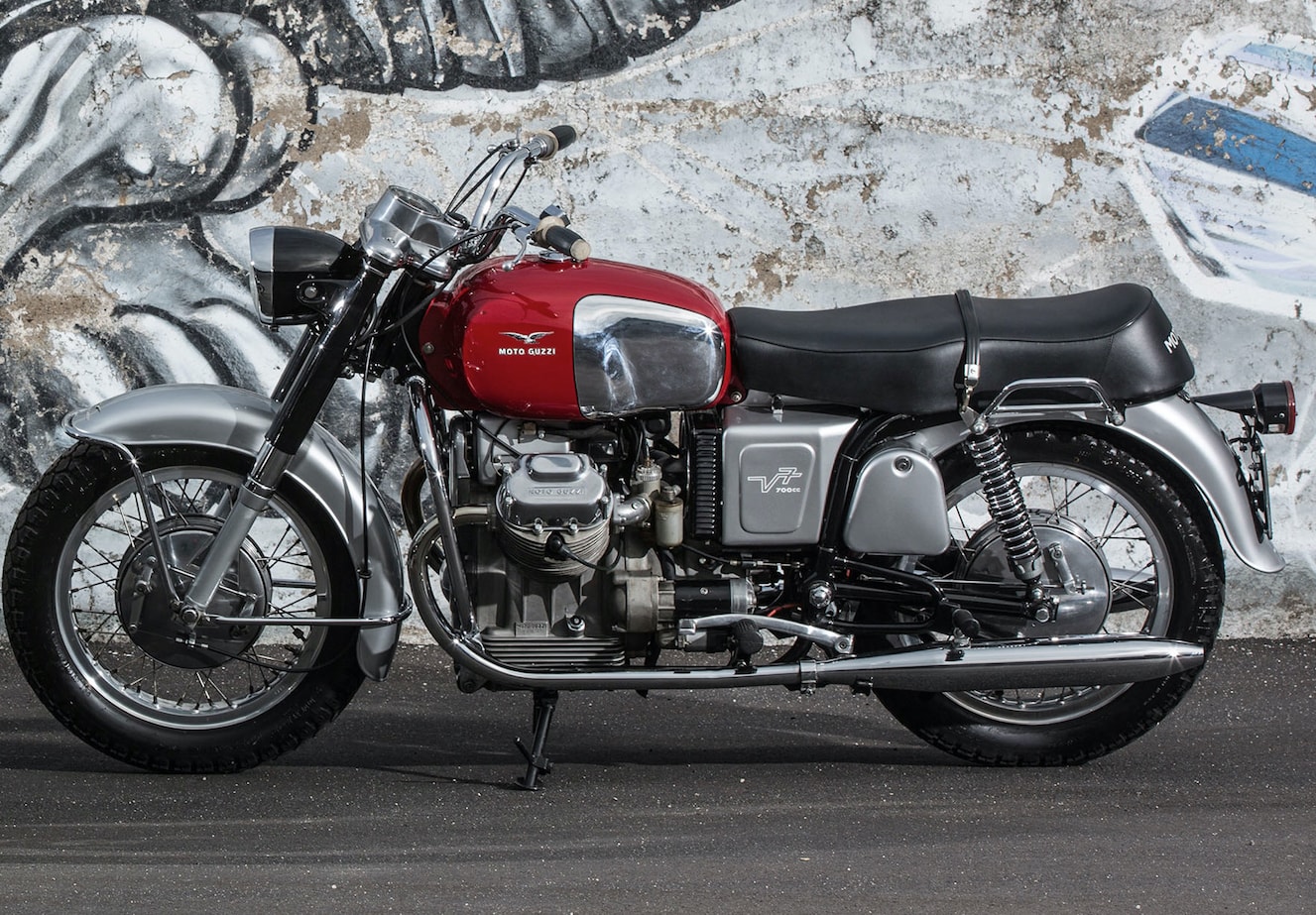 February 2021 - In 1967, the motorcycling market was rocked by the appearance of the first Italian maxi-moto: the Moto Guzzi V7 had been born. The embodiment of Giulio Cesare Carcano’s genius, the V7 marked the début of the transversal 90° V-twin with an amazing 703cc, record numbers for that time. 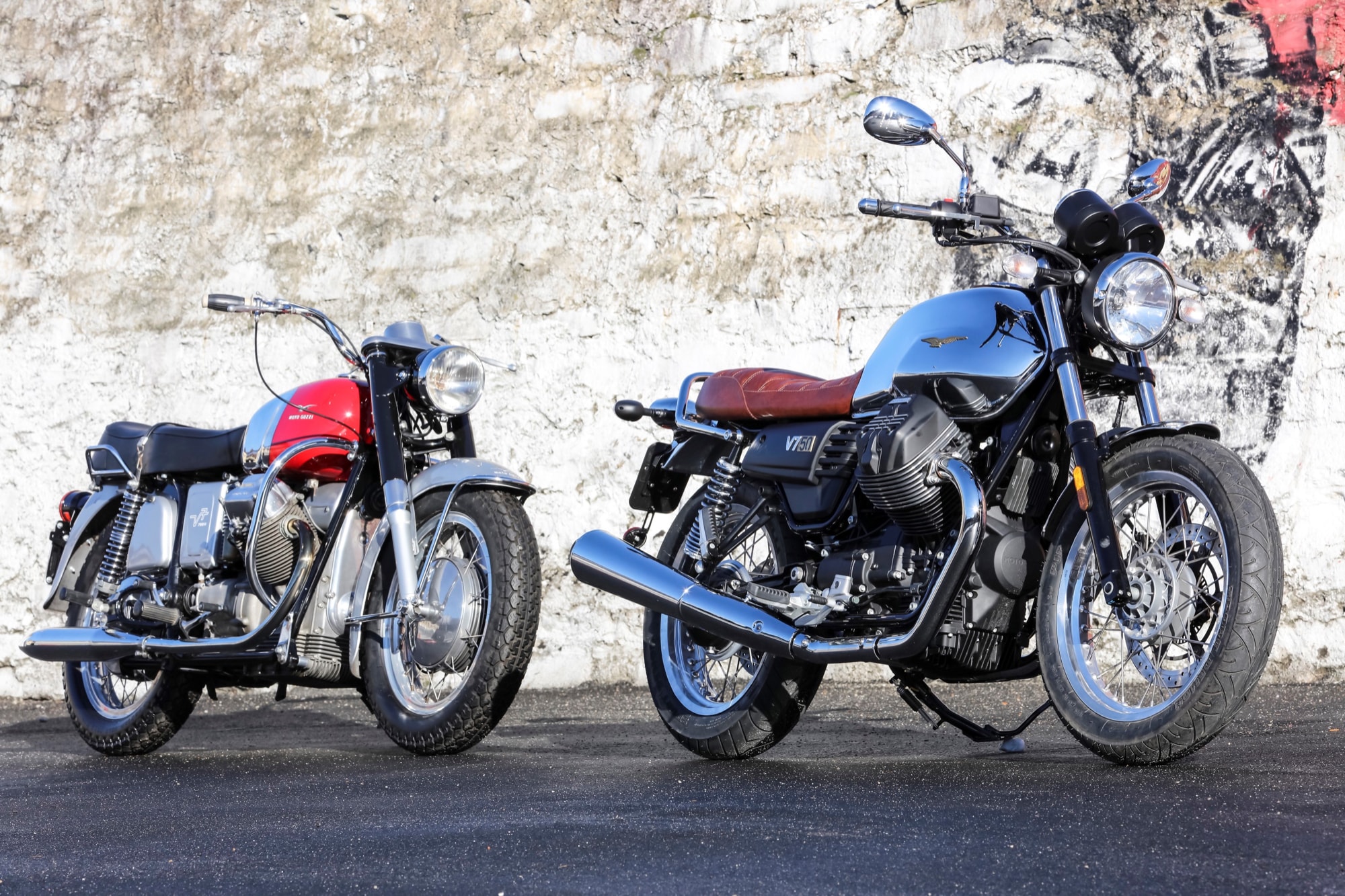 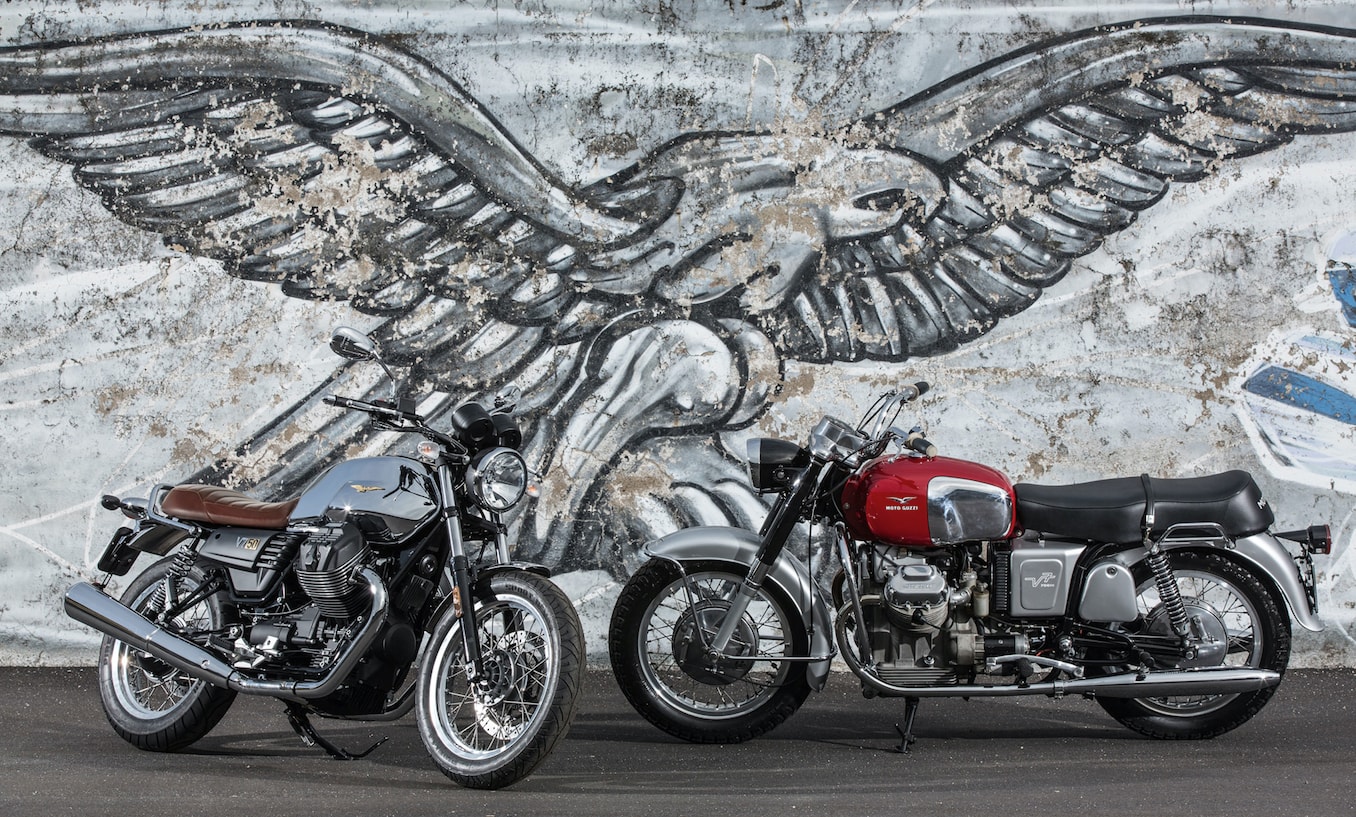 Received with extraordinary success by critics and the general public, the V7 promoted the image of the brand in the world through the fame of a bike that was prestigious, comfortable and elegant, not to mention extremely reliable. For many owners, it was the expression of an important part of their lives, the part connected to memories of youth, travel and friendship, in one of the brand’s most shining moments. 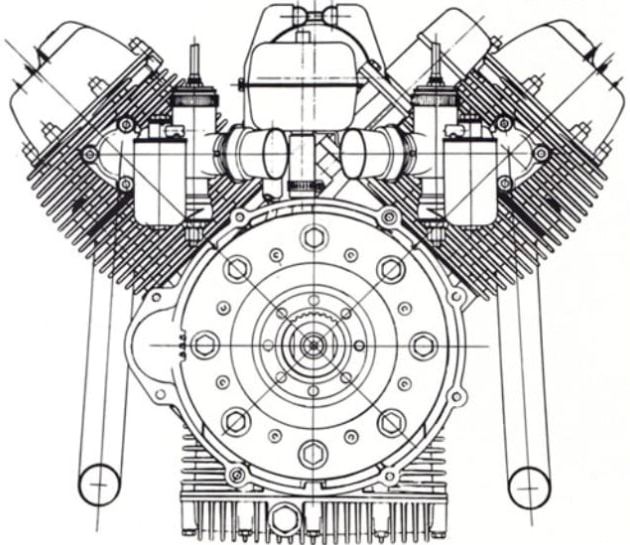 In 1969, the engineers with the Mandello del Lario based manufacturer increased the engine capacity of their transversal 90° V-twin from 703 to 757cc, achieving a significant increase in top performance, yet without having any impact at all on the proverbial reliability and sturdiness that had made the V7 so successful on the market and with police departments over half the world. Well aware of the potential this powerplant had reached, Moto Guzzi decided to advertise the results, outfitting a fairing-clad prototype of the V7 Special - powered by the new 757cc engine which, in June and October of the same year, set numerous world records in the 750 and 1000cc classes on the high speed ring of the Monza track, including the distance record of 100 km completed at an average speed of 218.426 km/h and 1000 km done at an average speed of 205.932 km/h. 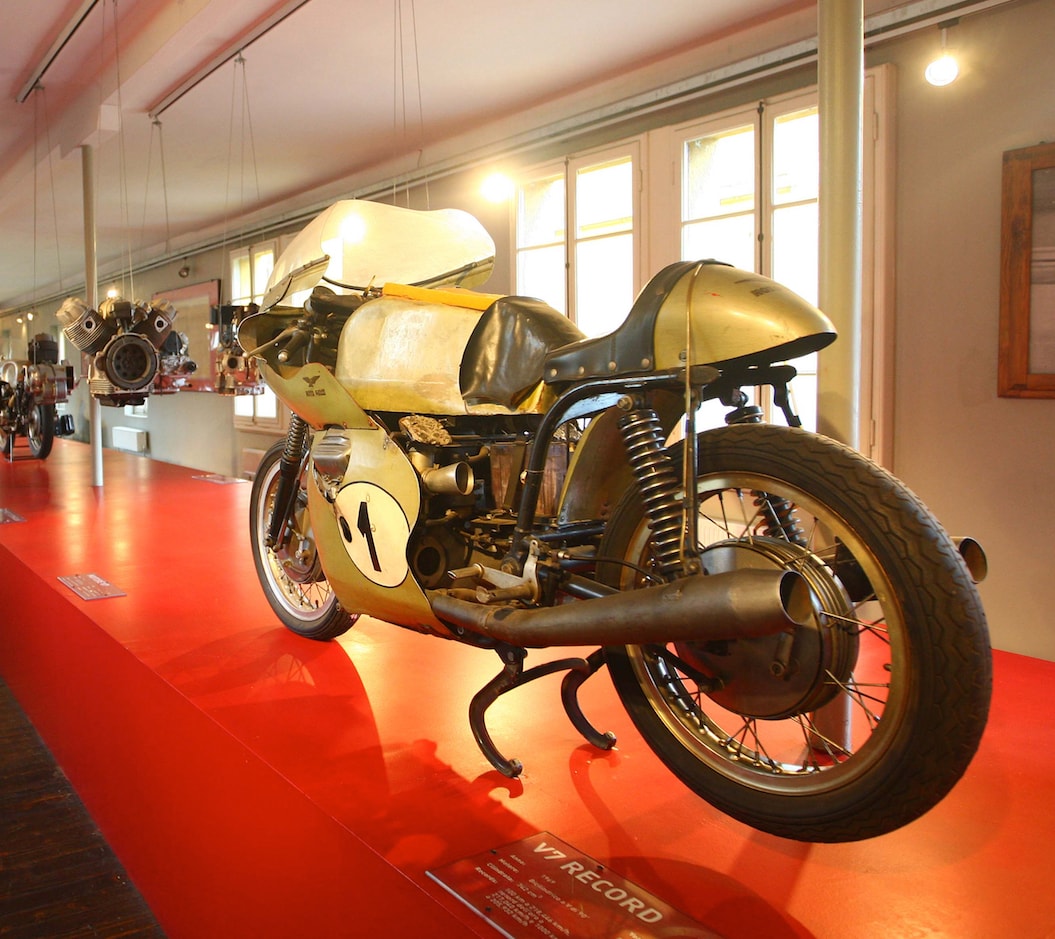 At that time, no one expected results like that from a vehicle derived from a vehicle like the V7 Special, widely acknowledged as a touring bike. In fact, the feedback generated by the undertaking was such that it convinced Moto Guzzi to create a sport model, capable of earning the favour of a new audience compared to the one acquired with the previous V7 models. The task was assigned to Lino Tonti, one of the most ingenious Italian designers who built an extremely form-fitting CrMo tubular frame around the generous shape of the 750cc engine. 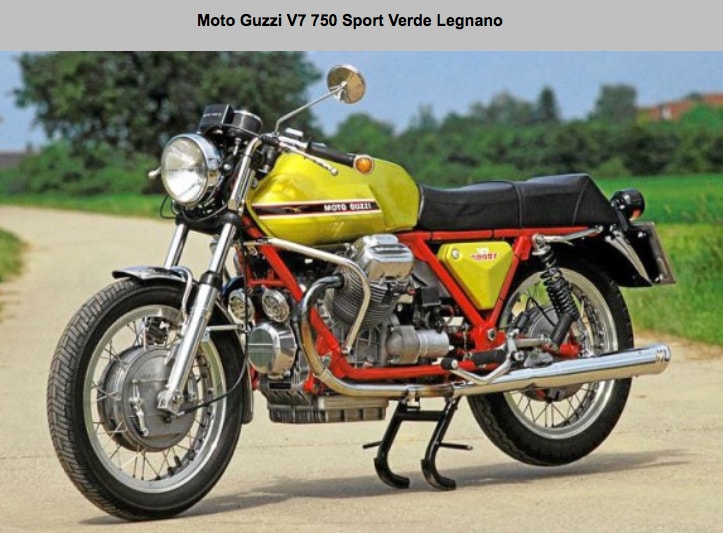 Low, long and “crouched down” on the suspension, the V7 Sport made its début on the market with an uncommon colour combination achieved with the “Legnano” green of the superstructure, in contrast with the red frame, reserved for the first 150 units assembled in the Moto Guzzi “reparto esperienza” and featuring a CrMo tubular frame, as well as some minor modifications in the timing and ignition with respect to the subsequent versions with a black frame. Featuring outstanding dynamic performance, the V7 Sport impressed the public and specialised critics as the first mass-produced bike in the world capable of exceeding a top speed of 200 km/h, a fact that was reported in 1972 by all the most important motorcycle periodicals. 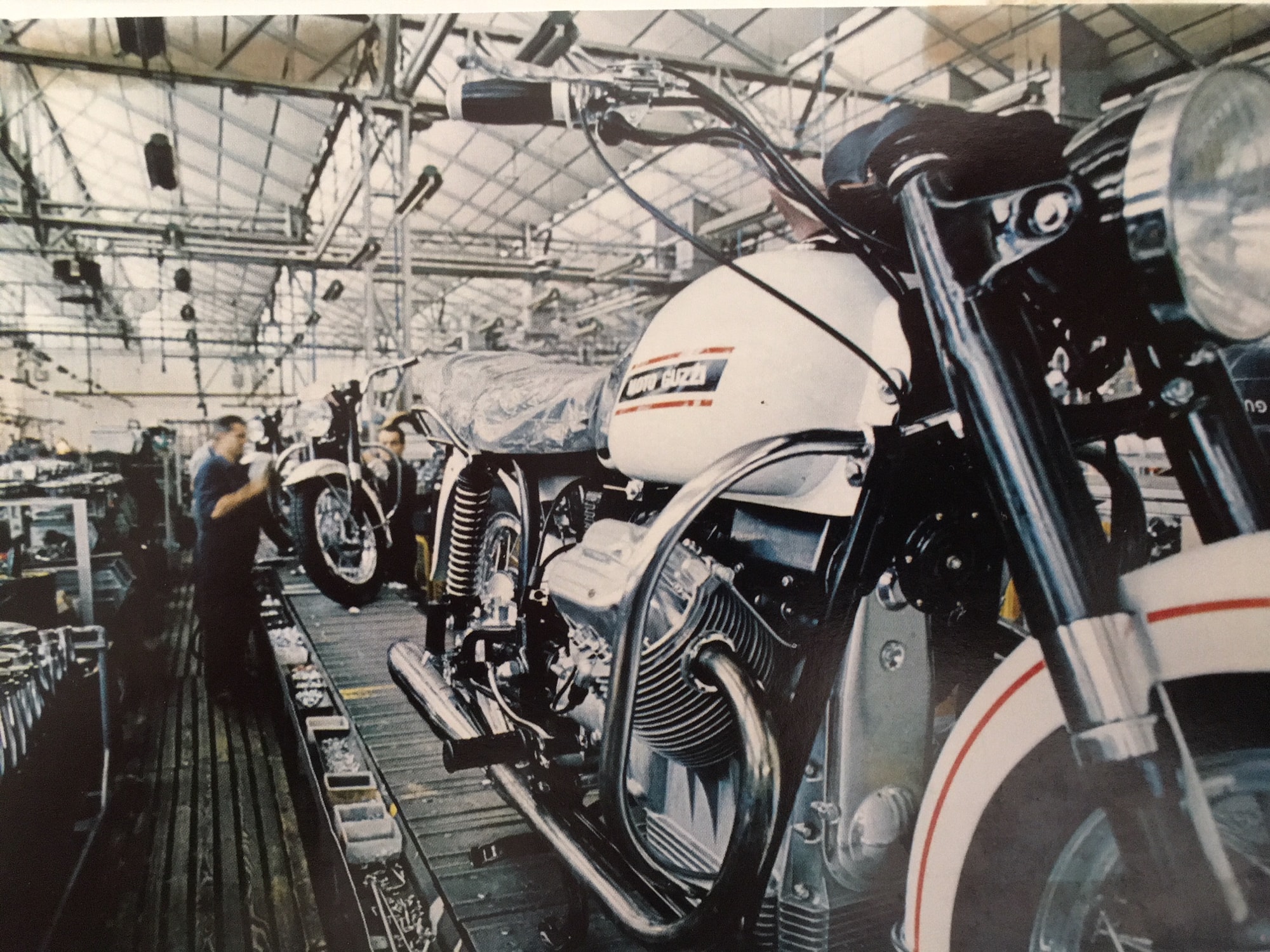 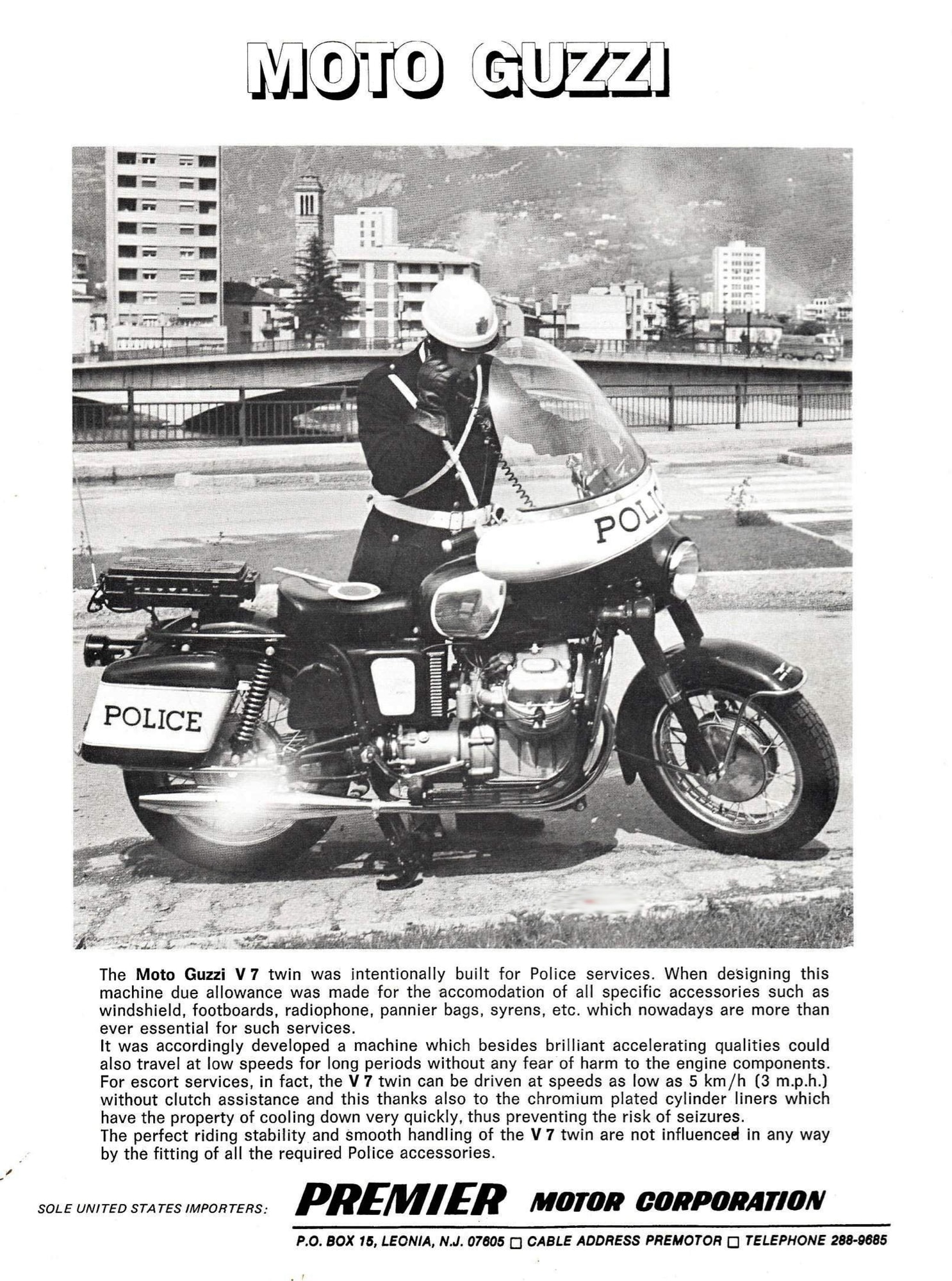 After a series of extremely strenuous tests, in 1970 the Moto Guzzi V7 Police was selected to join the LAPD (Los Angeles Police Department) fleet. For the first time, a foreign bike had won a supply contract in America for the police, beating out, in addition to the domestic manufacturer, the best English competitor. The news of these Moto Guzzi bikes wearing the Stars and Stripes generated great interest in Europe as well, reinforcing the outstanding reputation the V7 had earned with the 700 and Special versions. However, from the photos of the LAPD and Highway Patrol officers, it is clear that this was a decidedly different Moto Guzzi V7 from the ones normally sold: larger seat, cowhorn handlebars, platform footrests and an abundance of chrome. 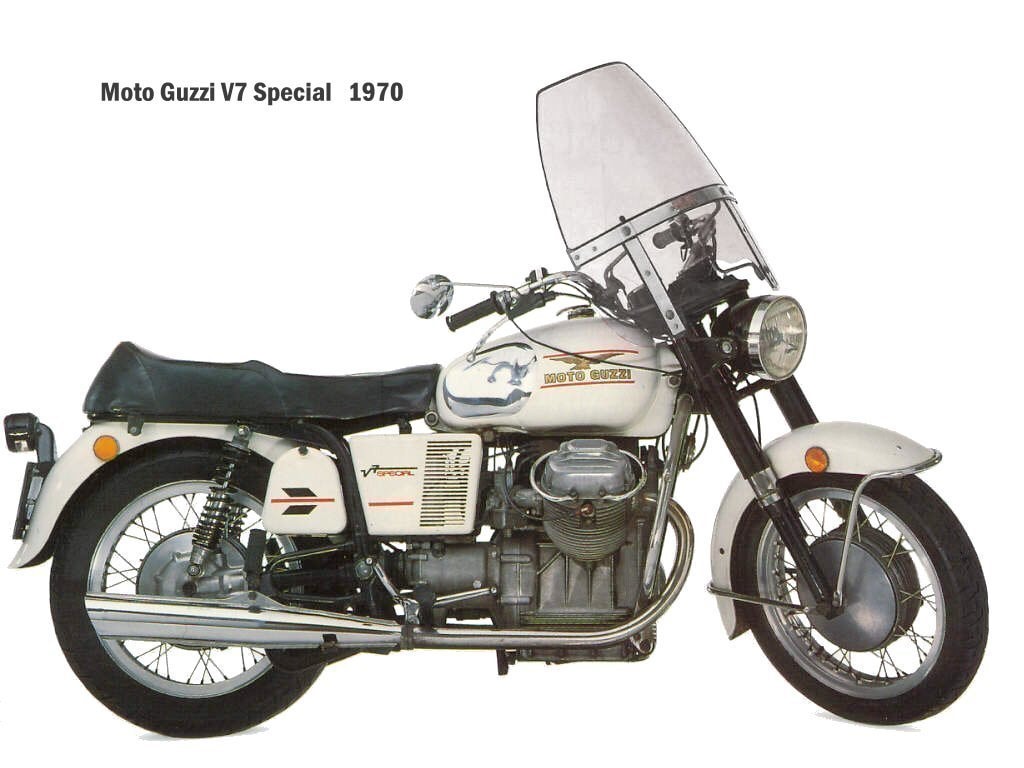 Elements that gave the V7’s style an “Americanized” image that people liked and which stimulated enough of a demand to convince Moto Guzzi to mass produce it in 1971 under the name California, a parallel story of long-lived success which has since seen seven generations and four engine displacements (750, 850, 1000, 1100). 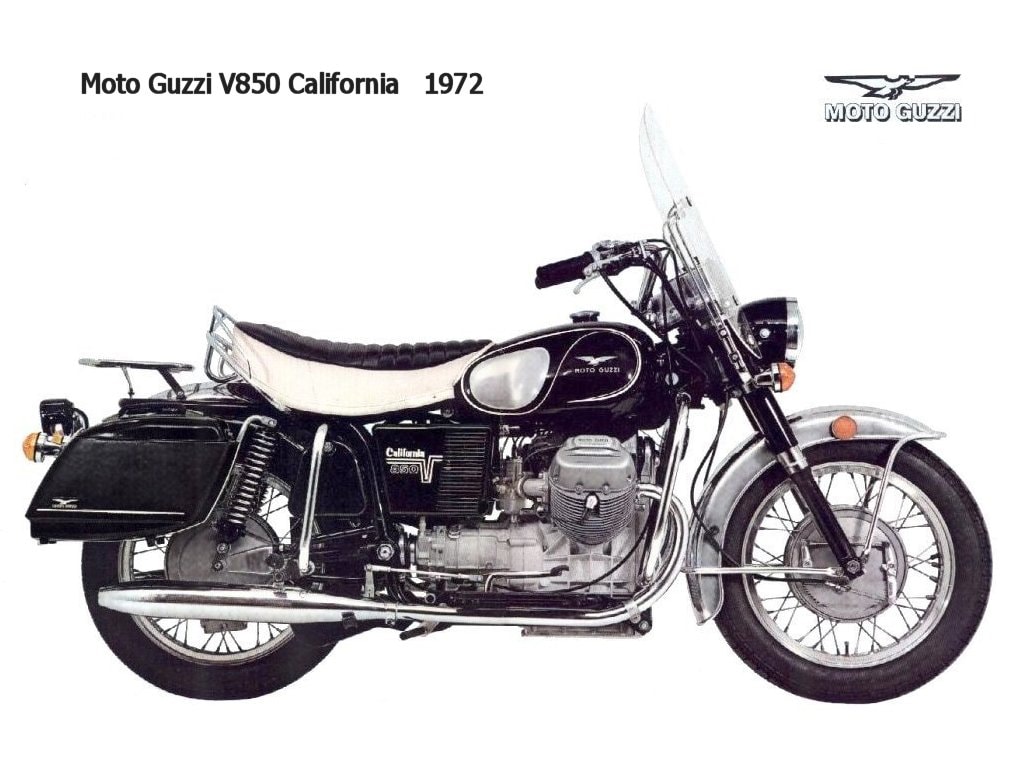 MOTO GUZZI: THE ORIGINS OF THE LEGENDARY V7 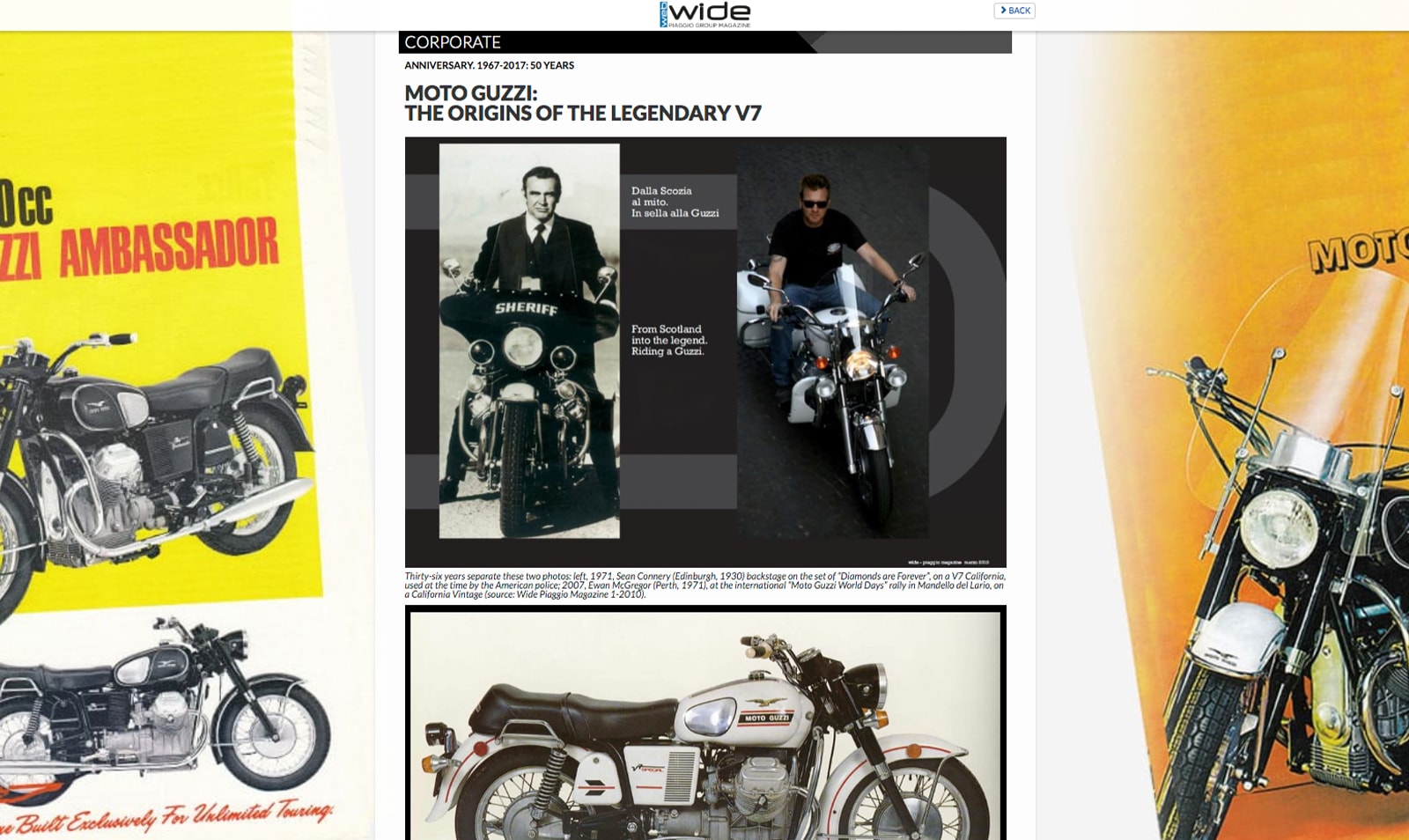