VESPA CELEBRATES ITS 75TH BIRTHDAY AND SURPASSES THE MILESTONE OF 19 MILLION UNITS PRODUCED, INCLUDING ALMOST TWO MILLION IN THE LAST DECADE ALONE

THESE ARE 19 MILLION STORIES OF GUYS AND GIRLS, ENTIRE GENERATIONS WHO DREAMED OF AND GAINED THEIR FREEDOM ASTRIDE A VESPA. TODAY, VESPA IS A LEGEND THAT HAS SURPASSED ITS FUNCTION OF AN EASY AND ELEGANT MEANS OF COMMUTING TO BECOME AN ICON OF STYLE, FASHION AND DESIGN. A GLOBAL BRAND, PRESENT IN 83 COUNTRIES ON EVERY CONTINENT, VESPA IS IN ONE OF THE BRIGHTEST MOMENTS OF ITS HISTORY, CAPABLE OF REINVENTING ITSELF WITHOUT DISTORTING ITS VALUES, ALWAYS STAYING YOUTHFUL, CONTEMPORARY AND INIMITABLE.

Pontedera (Italy), 22 April 2021 – On 23 April 2021 Vespa celebrates 75 years and reaches the extraordinary milestone of 19 million units produced, beginning from the spring of 1946. The Vespa that celebrates the 19 million is a GTS 300 in 75th Anniversary Special Edition and was assembled in the Pontedera plant, where Vespa has been manufactured uninterrupted since 1946. 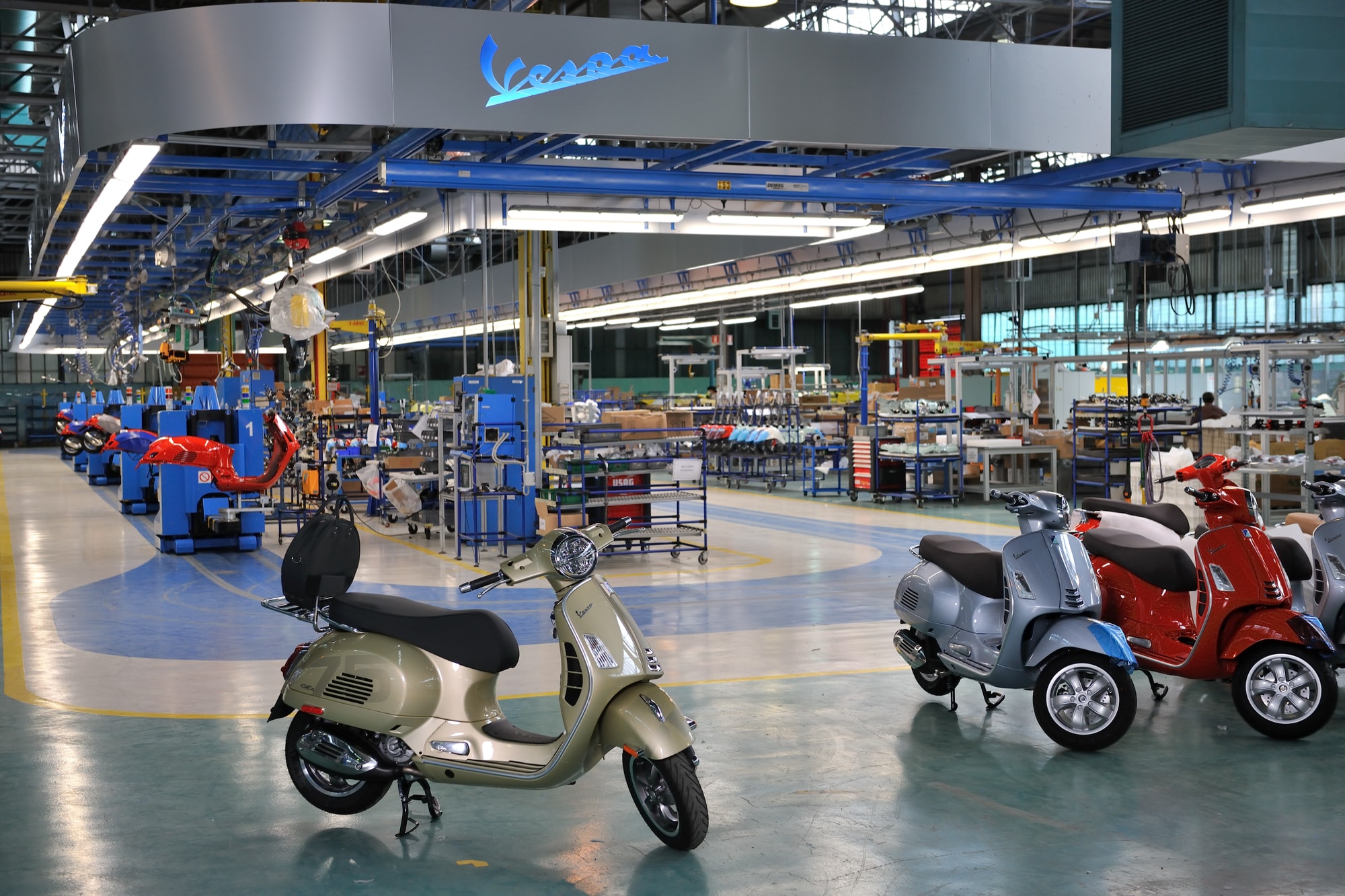 19 million Vespas translate into as many stories of guys and girls worldwide who have gained their freedom astride the most beloved two-wheeler in the world. Vespa has accompanied their lives and embodied feelings and the desire for freedom. Because Vespa is part of our culture. It is a protagonist in our lives, in the imagination of many generations of Italians, Europeans, Americans, Africans and Asians. Today, Vespa is one of those rare products that are consistently part of the landscape in our daily lives. 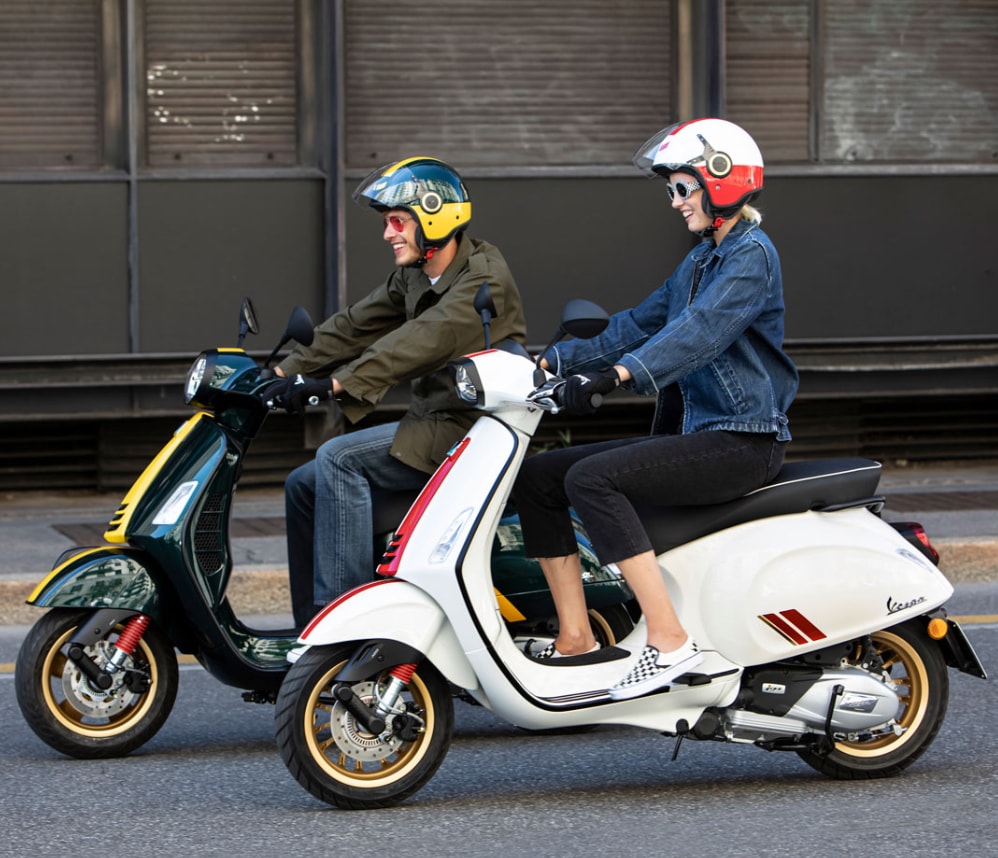 This extraordinary moment arrives as Vespa is experiencing one of the brightest times of its history. Sold in 83 countries on every continent, it is now the most famous and most loved two-wheeled vehicle in the world. For some time now, Vespa has far surpassed its function as an easy and elegant means of commuting to become a global brand, a symbol of Italian technology and style, capable of bringing millions of enthusiasts together in its name.

A range in constant evolution and consistently on the cutting-edge of technology, a unique style, transcending fashion and trends and skillfully reinventing itself whilst remaining faithful to its original values are just some of the reasons for a success that is measured in over 1 million and 800 thousand vehicles manufactured in the last ten years. 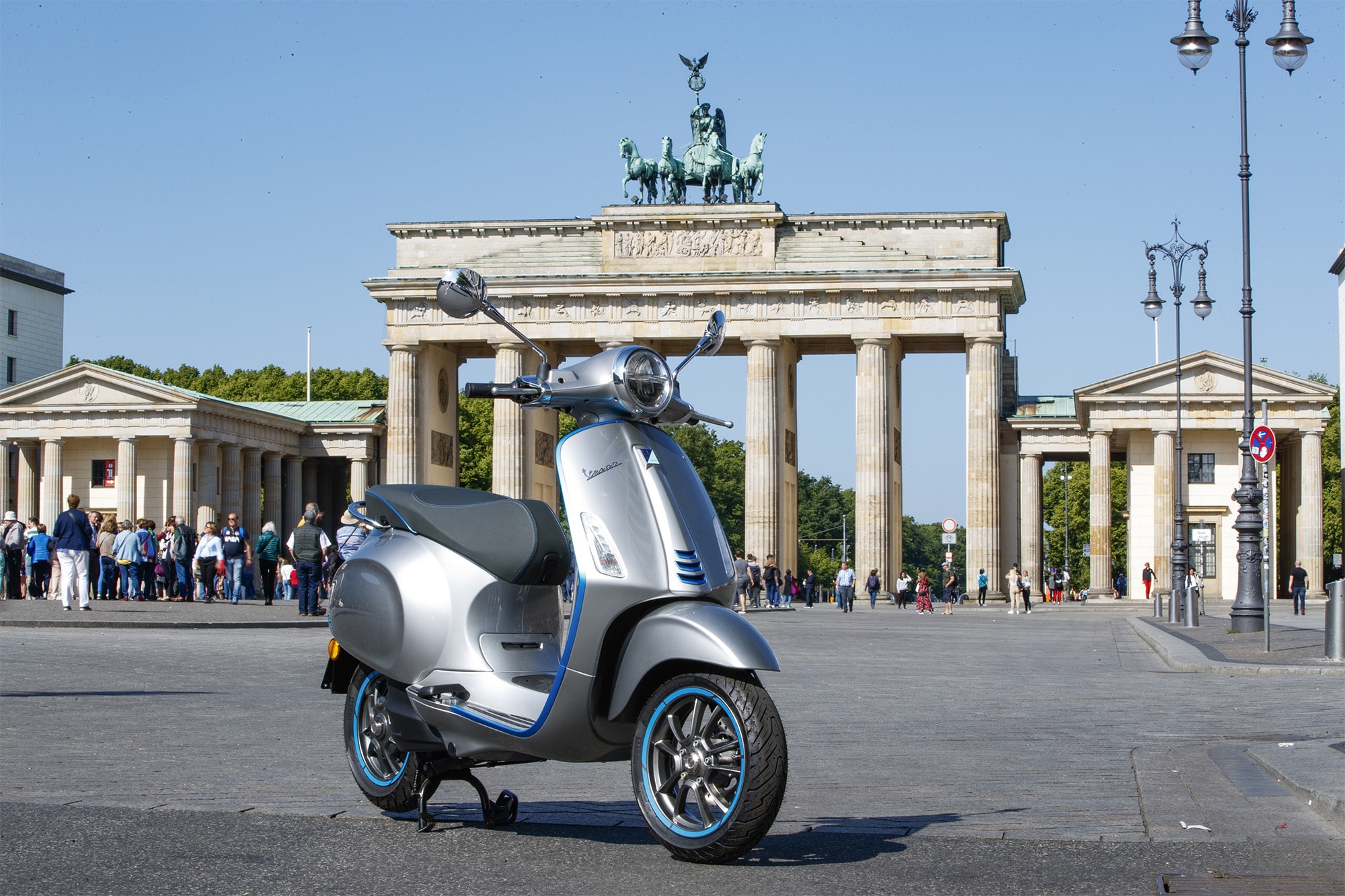 Halfway through the first decade of the new millennia, annual Vespa production was around 50 thousand units and, since then, constant and spectacular growth took it an excess of 100 thousand in 2007 and 200 thousand from 2018. 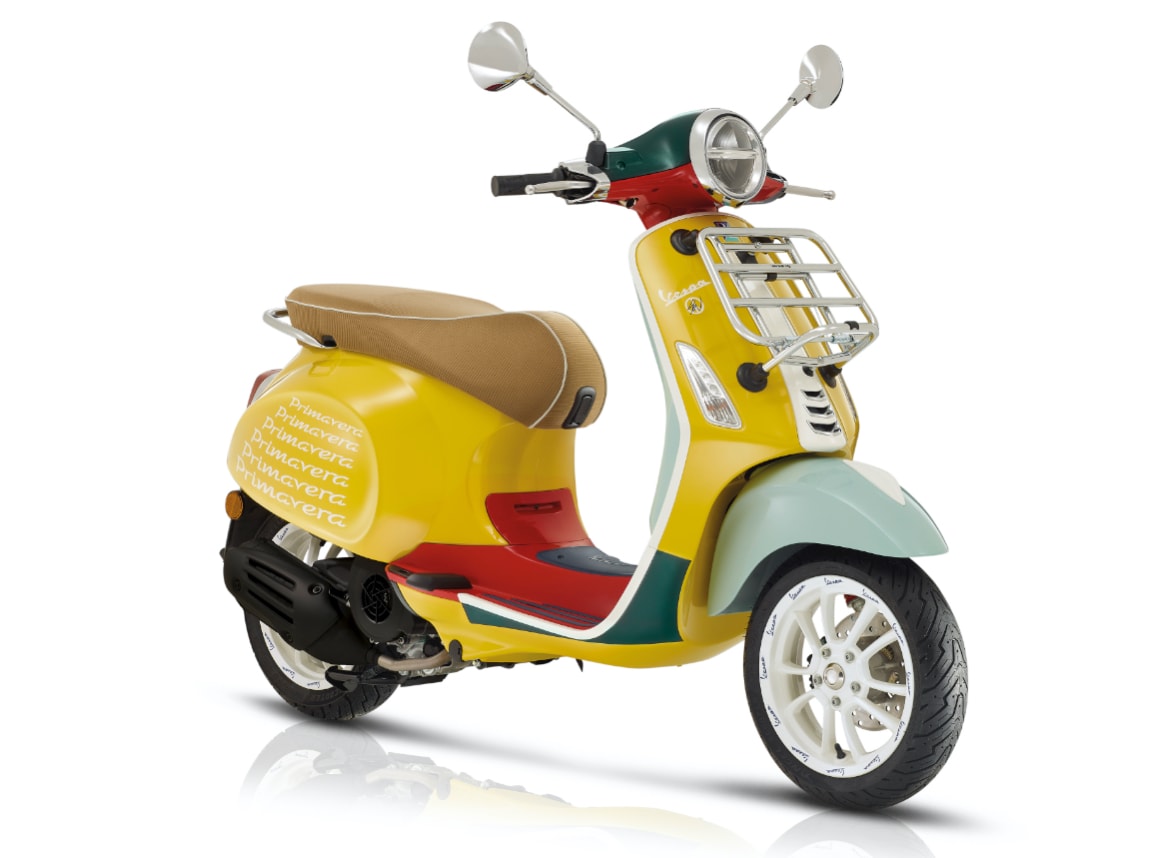 On the dawn of its 75 years, Vespa is more of a global brand than ever, one of the best known “Made in Italy” products, a true citizen of the world that is manufactured out of three production sites: Pontedera, with production destined for Europe, the Americas and all the western markets; Vinh Phuc, in Vietnam, which serves the local market and the Far East, and India, in the ultra-modern Baramati plant, opened in April 2012, where Vespas for the Indian and Nepalese markets are produced. 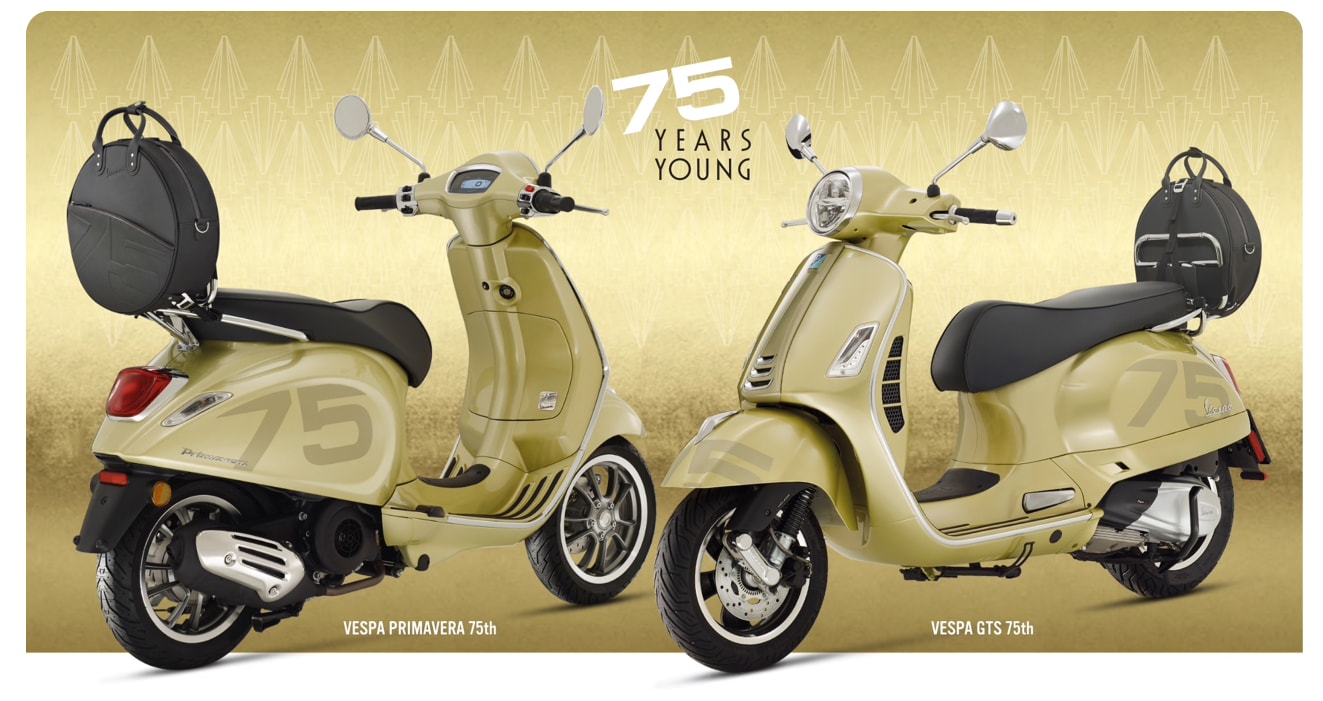 For its 75th birthday, Vespa introduces a special Vespa 75th series, available for Vespa Primavera (in the 50, 125 and 150 cc engine sizes) and for Vespa GTS (in the 125 and 300 cc engine sizes), limitedly to 2021. The body of Vespa 75th takes on the brand new metallic Giallo 75th colour which, designed expressly for this series, reinterprets colours in a modern key that were all the rage in the forties. The number 75 appears on the side panels and front mudguard in a more accentuated shade, creating an elegant tone-on-tone, as well on the front, where the traditional “necktie” is refined in a matte yellow pyrite colour.

A UNIQUE HISTORY. Vespa was born out of the desire to create an innovative product for individual mobility. First a “motor scooter” was built on the model of small motorcycles for parachutists and then a prototype that revolutionized the concept that had dominated the classic motorcycling layout until then. 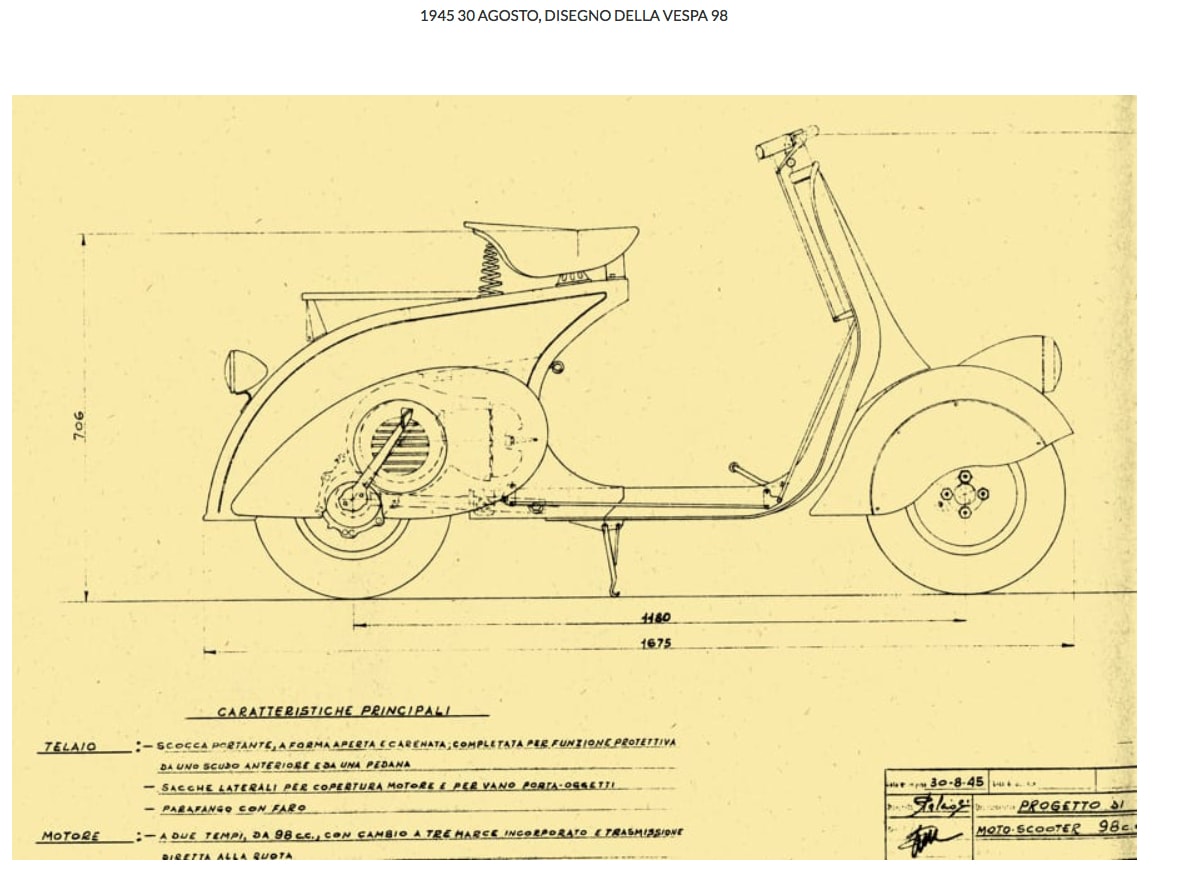 A vehicle was created with a stress-bearing body, direct-drive, with the gear shift on the handlebar. The classic front fork disappeared in favour of a single-sided swingarm that made tyre changes easier and, above all, the frame disappeared, replaced by a stress-bearing body capable of protecting the rider from dirt and rumpled clothing. The Vespa design patent filing date is 23 April 1946. 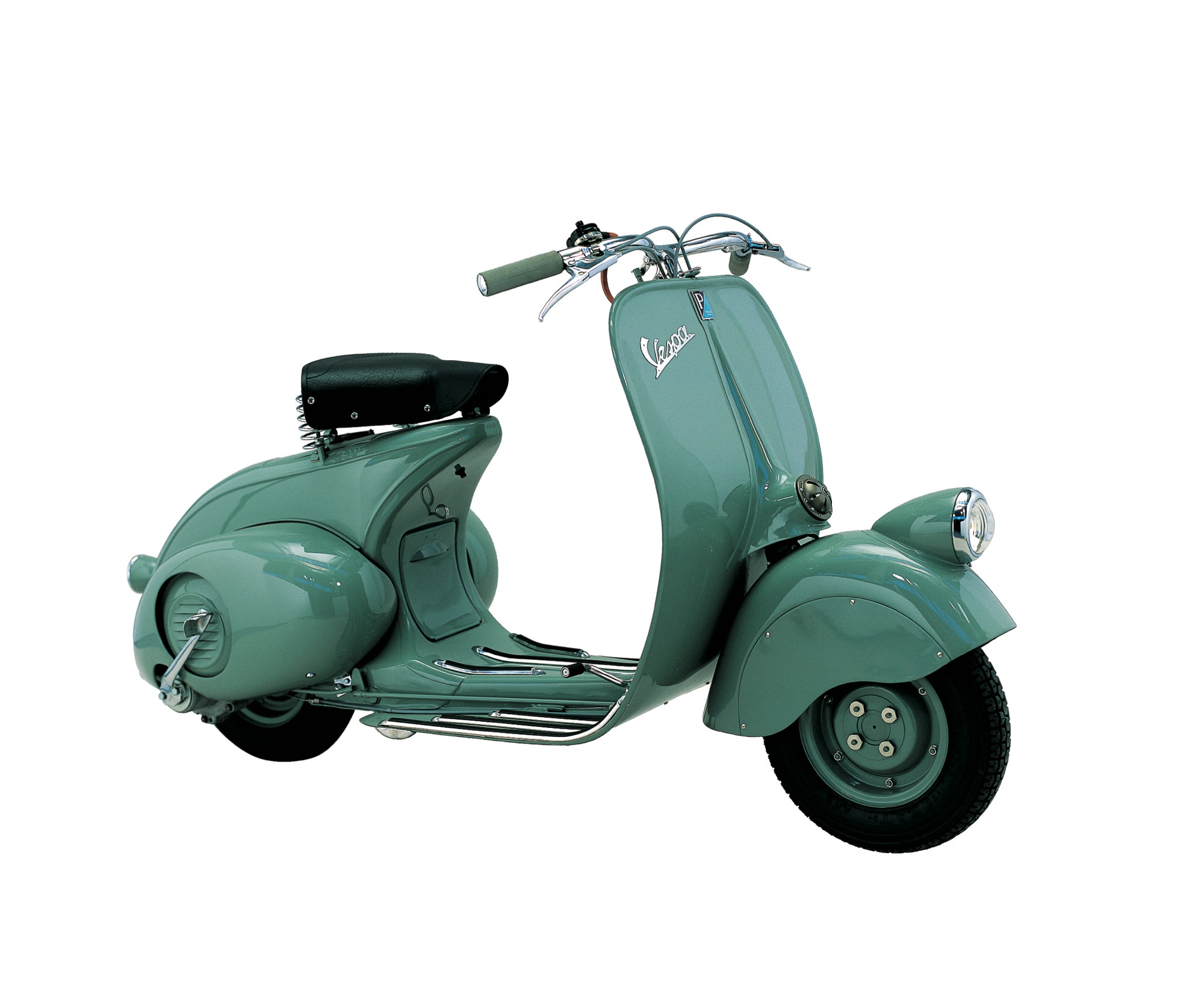 From its first appearance - in a country where everything needed to be rebuilt but, partly for this reason, full of ideas, creativity and hope - Vespa represented the joy of living and racing toward the future and this is why it soon became an icon of freedom and emancipation for guys and girls all over the world. This wealth of Vespa’s values was accompanied throughout the years by a style and technology always on the cutting-edge in the various decades of its life. 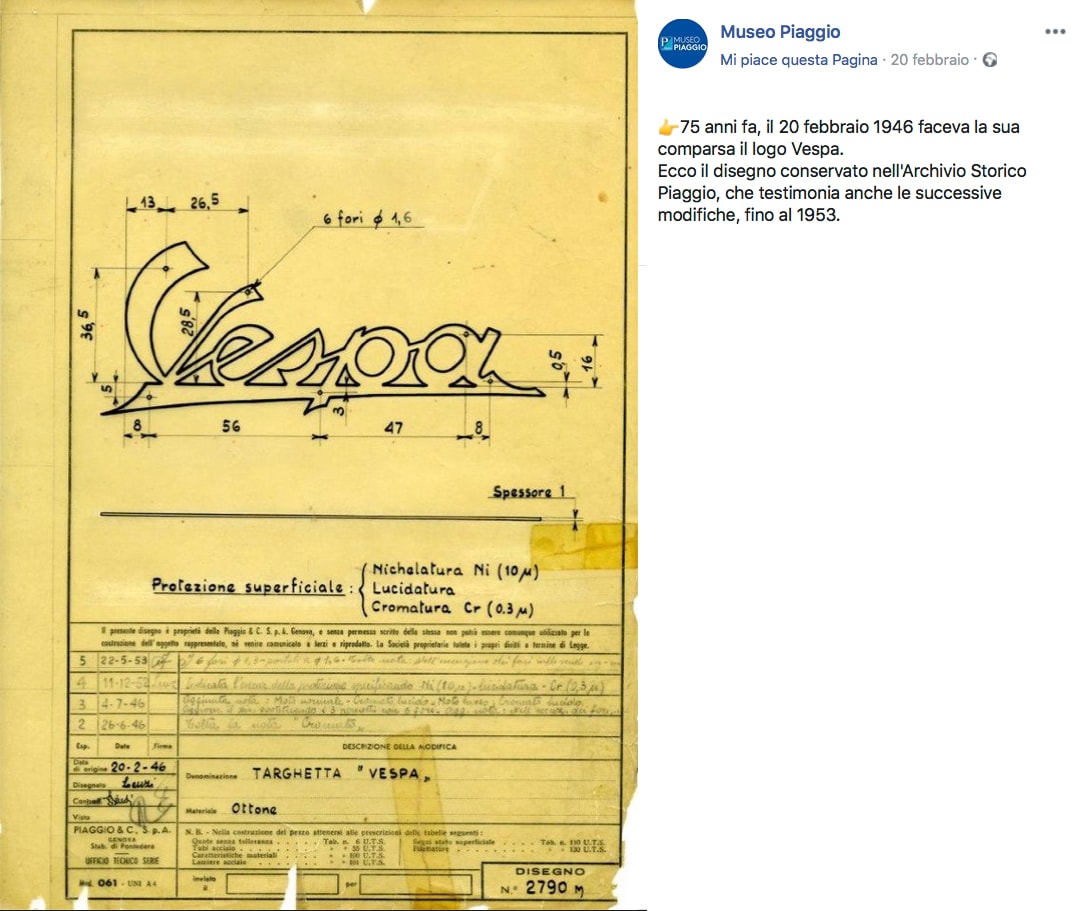 75 years ago, 20 February 1946, the Vespa logo appeared. This is the drawing preserved in the Piaggio Historical Archive, which also testifies to subsequent modifications, up to 1953.
Source: www.facebook.com/museopiaggio

After the years of rebirth, Vespa continued to strengthen its legendary status, fortifying its identity through the decades of economic prosperity and the generational renewal of the sixties. As cars and mass motorization spread, Vespa offered salvation from traffic, with the versions in the smaller engine sizes catering to the legendary world of youth which, precisely in those years, was gaining its space in society. And when, in the ‘70s, the signs of a growing ecological awareness arrived, Vespa was the antidote to city pollution, able to zip through traffic and easily find parking. 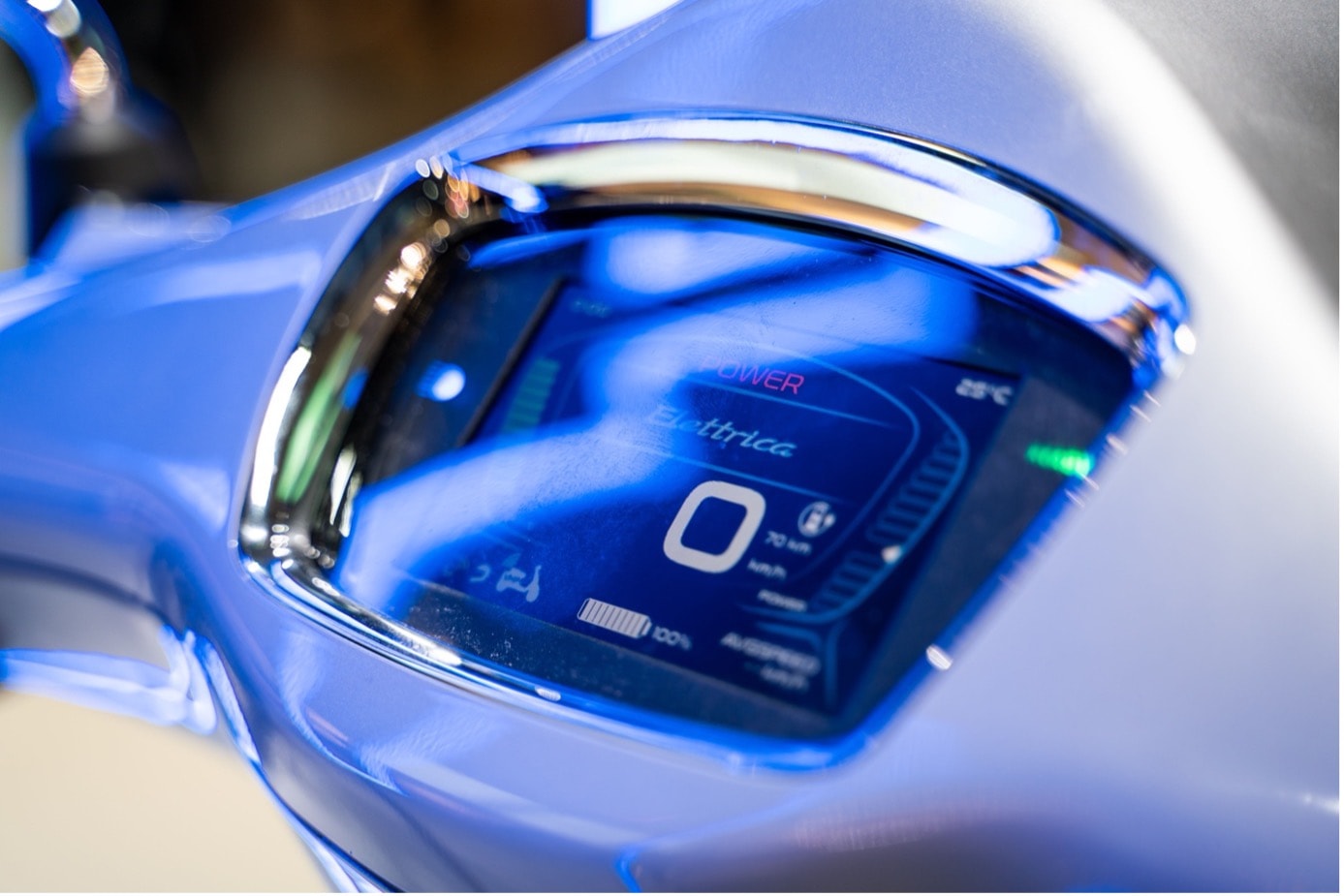 In the various eras it has seen, Vespa has always represented the cutting-edge of technology. Characterized by an extremely advanced stress-bearing body concept, still built entirely out of steel to this day, it marked the evolution of individual mobility. Today, the latest Vespa vehicles, equipped with ecological engines and technical solutions to support modern riding, represent the style synthesis of an evolution that has made Vespa design immortal, ensuring it is an icon of Italian elegance the world over.

VESPA TIMELINE. On 23 April 1946, Piaggio (founded in 1884) files the patent for “a motorcycle featuring a rational elemental and organic complex combined with frame and fenders and an engine hood covering all mechanical parts”. The Vespa is born. The motorized scooter with a 98 cc, 2T single-cylinder engine is built in the Pontedera plant, in Tuscany.  1948. The Vespa 125 cc model is introduced. 1949. The Unione Italiana (Italian Union) Vespa Riders, incorporating 30 clubs, is formed and holds its first convention. 1950. Vespa begins production in German under a licence agreement with Hoffman-Werke. 1951. Vespa begins production in the United Kingdom under license to Douglas of Bristol and in France with ACMA of Paris.  1952. The Vespa Club European is born in Milan to bring the clubs in Italy, France, Germany, Switzerland, Holland and Belgium together. Worldwide Vespa Club membership surpasses 50,000. There are more than 10,000 Vespa service stations around the world. 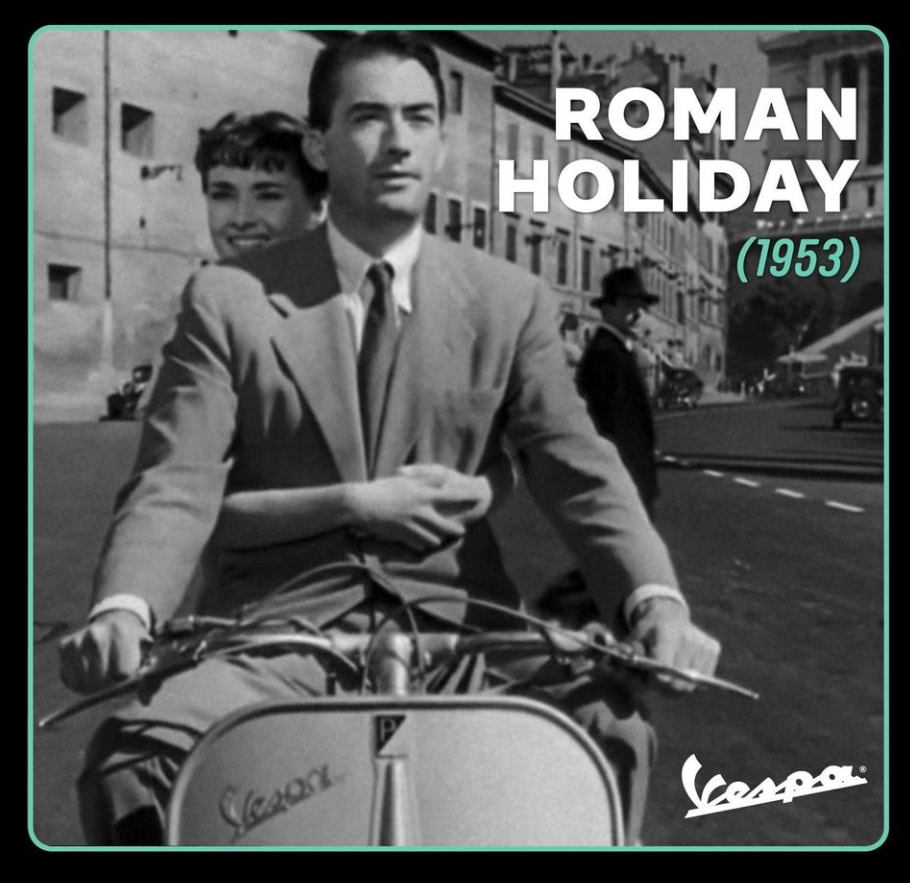 1953. Vespa 125 is immortalized in the film Roman Holiday by William Wyler with Gregory Peck and Audrey Hepburn. 1955. Vespa GS is the most elegant scooter ever built and marks a turning point for Vespa which, for the first time, exceeds the 100 km/h mark, adopts a 4-speed gearbox for the first time and mounts 10-inch wheel rims.  1964. The Vespino is born - Vespa in the 50 cc engine capacity. 1965. Vespa sales surpass 3.5 million.
1968. The “Chi Vespa mangia le mele” campaign (Those who Vespa eat the apples) revolutionizes the advertising world. 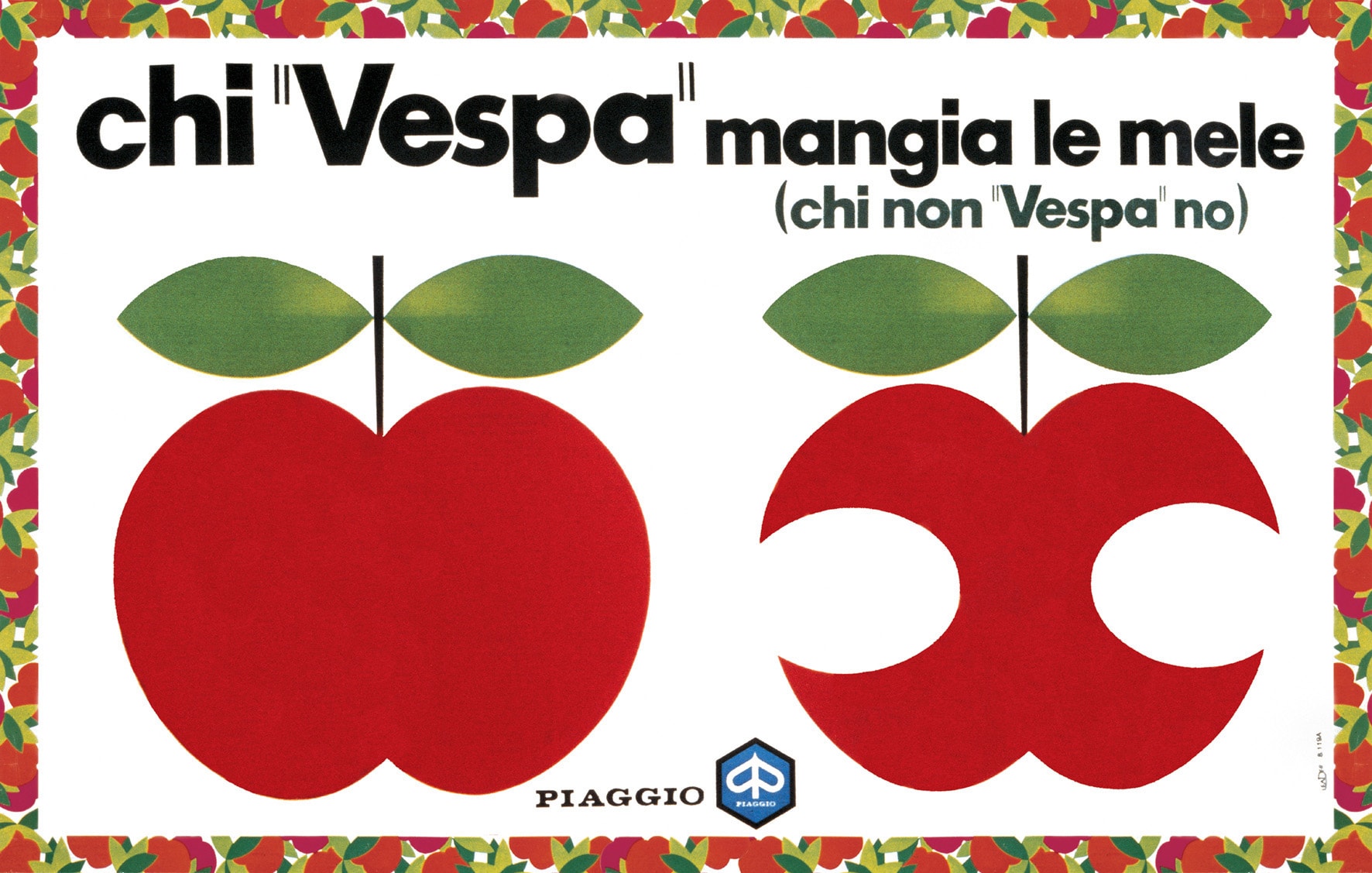 1968. Vespa Primavera is one of the longest-lasting Vespa models and the vehicle of new generations all over Europe. 1976. Vespa Primavera 125 - ET3 is the first scooter with electronic ignition. 1978. Vespa PX is born in the three-cylinder “classic” 125, 150 and 200 cc versions. It would be the most sold model in Vespa history with more than 30 million units. 1980. Four Vespa PX units participate in the Paris-Dakar, the most epic and gruelling race in the world. Incredibly, ridden by Marc Simonot, one of them would go on to finish the race. 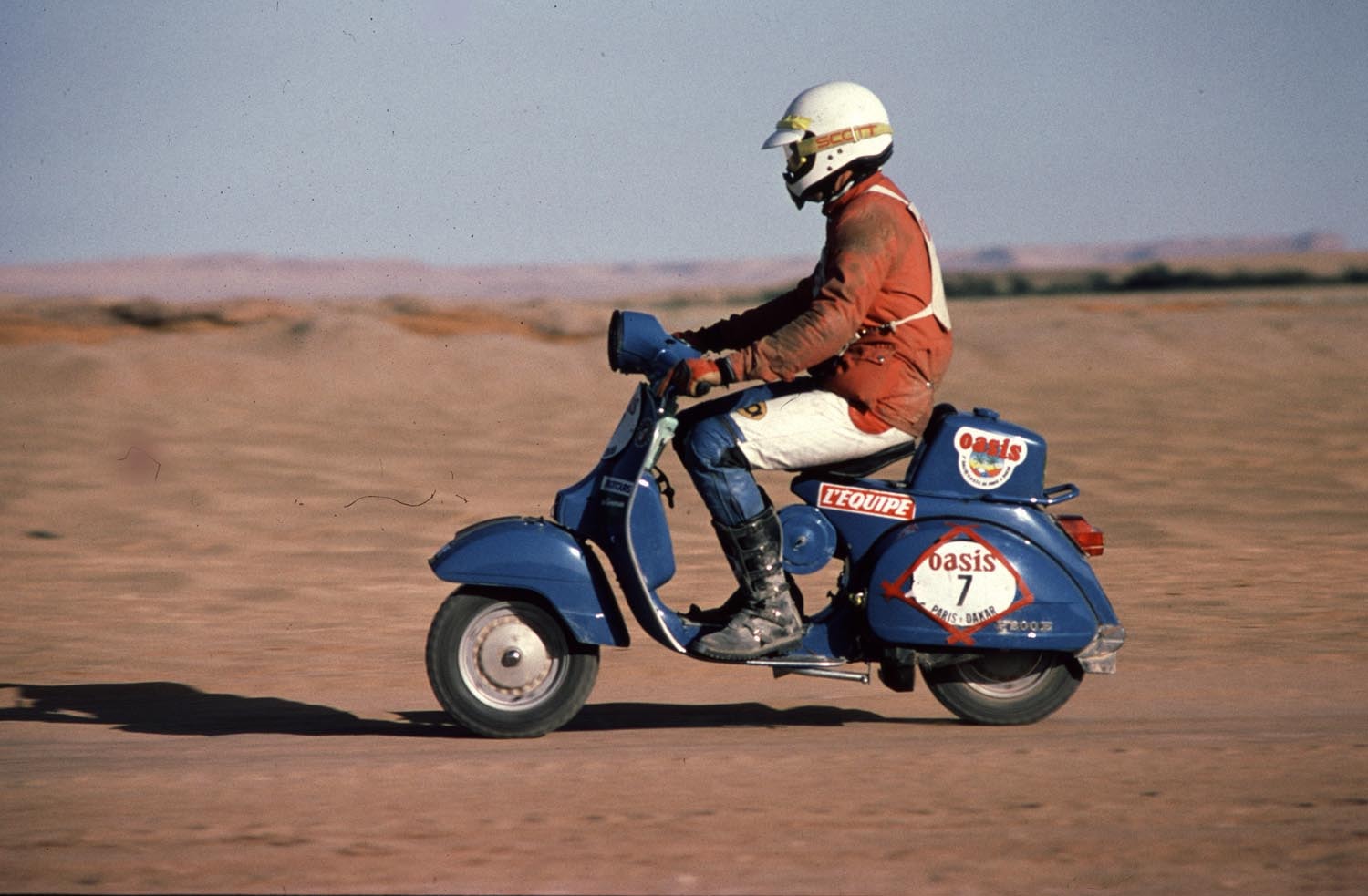 1984. Vespa PK 125 Automatica is the first Vespa with an automatic transmission. 1988. Vespa sales surpass 10 million. 1992. Giorgio Bettinelli, writer and journalist, leaves Rome on a Vespa and reaches Saigon in March 1993. He would go on to accomplish several other feats: in 1994-95, also on a Vespa, he covered the 36,000 km from Alaska to Tierra del Fuego. In 1995-96 he travelled from Melbourne to Cape Town - over 52,000 km in 12 months. In 1997 he started out from Chile, reaching Tasmania after three years and eight months, having travelled 144,000 km on his Vespa and crossed 90 countries across the Americas, Siberia, Europe, Africa, Asia and Oceania. All in all, Bettinelli has travelled 250,000 km on a Vespa. 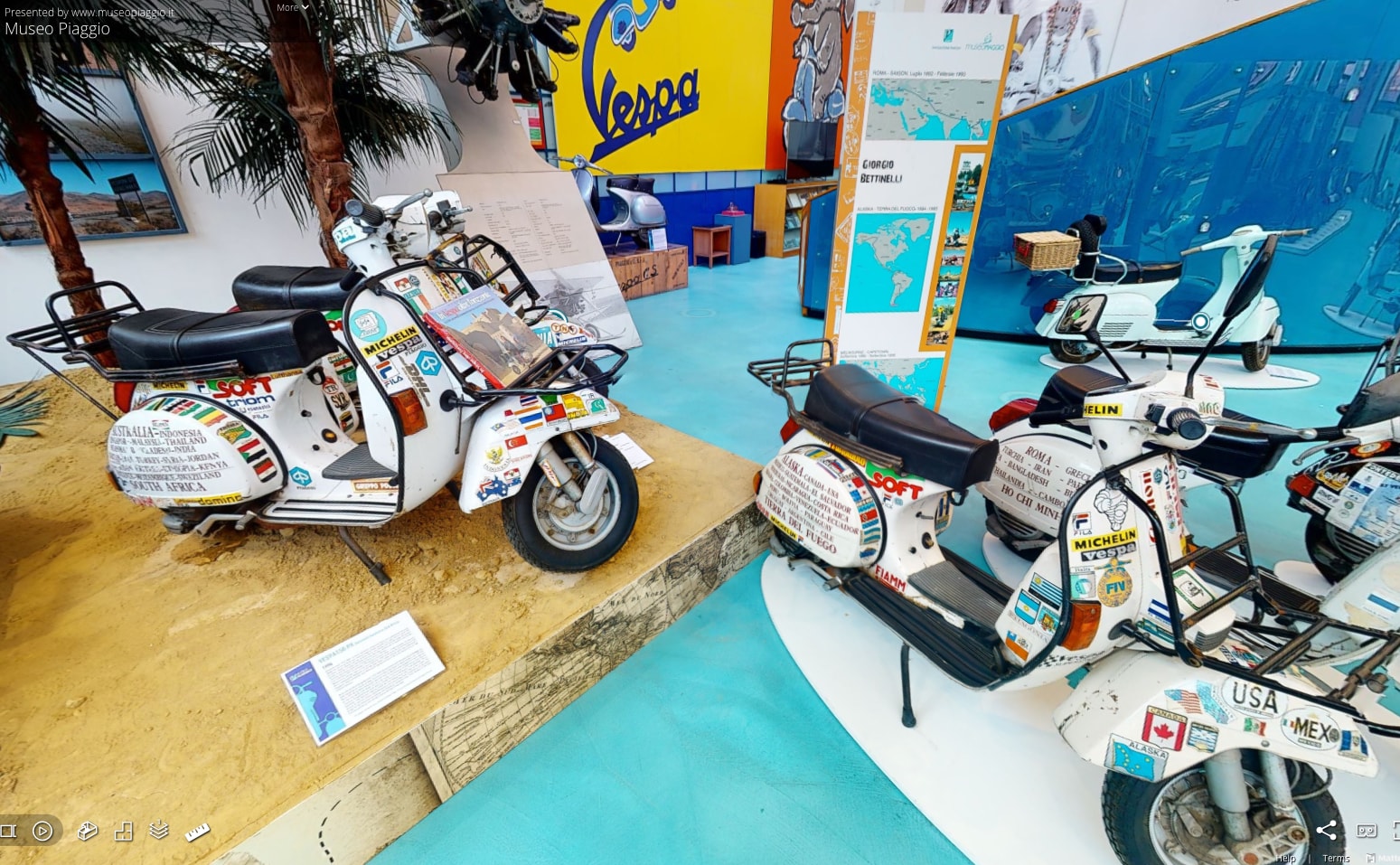 At the Piaggio Museum, the Vespas of Giorgio Bettinelli's great journeys (www.museopiaggio.it/en)

1996. The new Vespa generation is born with the ET4 125 cc model. For the first time, Vespa adopts a 4T engine and automatic transmission. 1996. The number of Vespas sold surpasses 15 million.
1997. Vespa ET2 (50 cc) is launched. 1998. Restyling and front disc brake for Vespa PX, the most sold scooter model in the world (over two million units from the time it was launched). 2000. Vespa returns to the American market. 2003. The return of the Vespone, Vespa GT 125 and Vespa GT 200 are born. 2005. Vespa LX marks the return to Vespa’s most classic lines. 2006. Vespa celebrates 60 years with the spectacular Vespa 60° special series that brings back the colours and style of the early Vespas. 2008. Vespa 300 GTS Super is the highest performance and sportiest model in history.

2011. Vespa 946 is highly exclusive model dedicated to aesthetic and technological perfection, the name of which recalls the year that the scooter symbolic of Italian elegance was born - 1946. 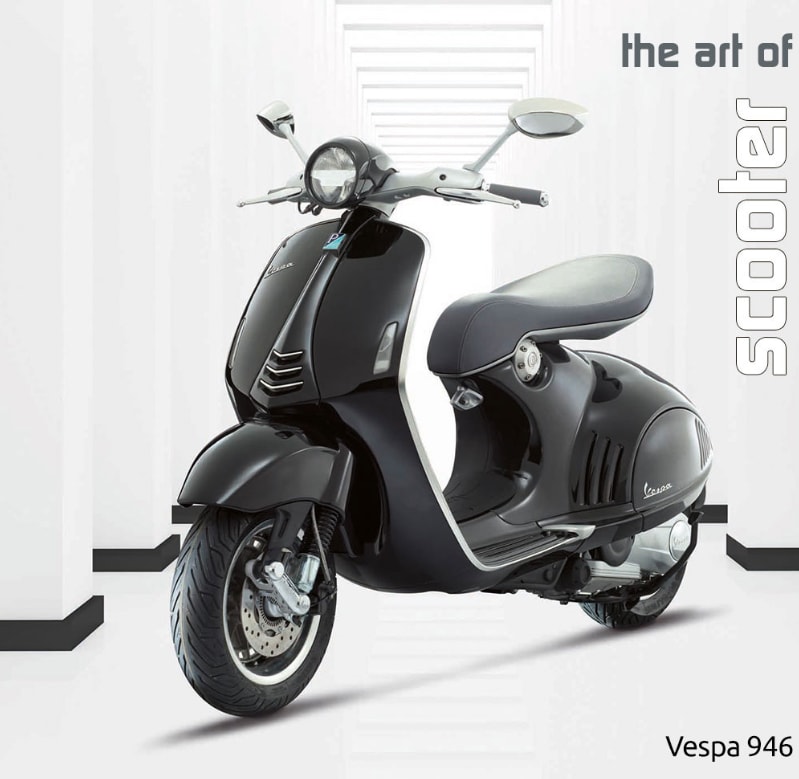 2013. The legendary Vespa Primavera returns, produced in the 50, 125 and 150 engine sizes, it renews the legendary Vespino. 2018. Vespa Elettrica is born, a modern work of art with a technological heart, destined to change the mobility segment. Completely silent and easy to ride, and produced entirely in Pontedera, it represents the revolutionary and contemporary soul of a brand that has always been ahead of its time, consistently at the cutting edge, while remaining faithful to its values in terms of style and technology. 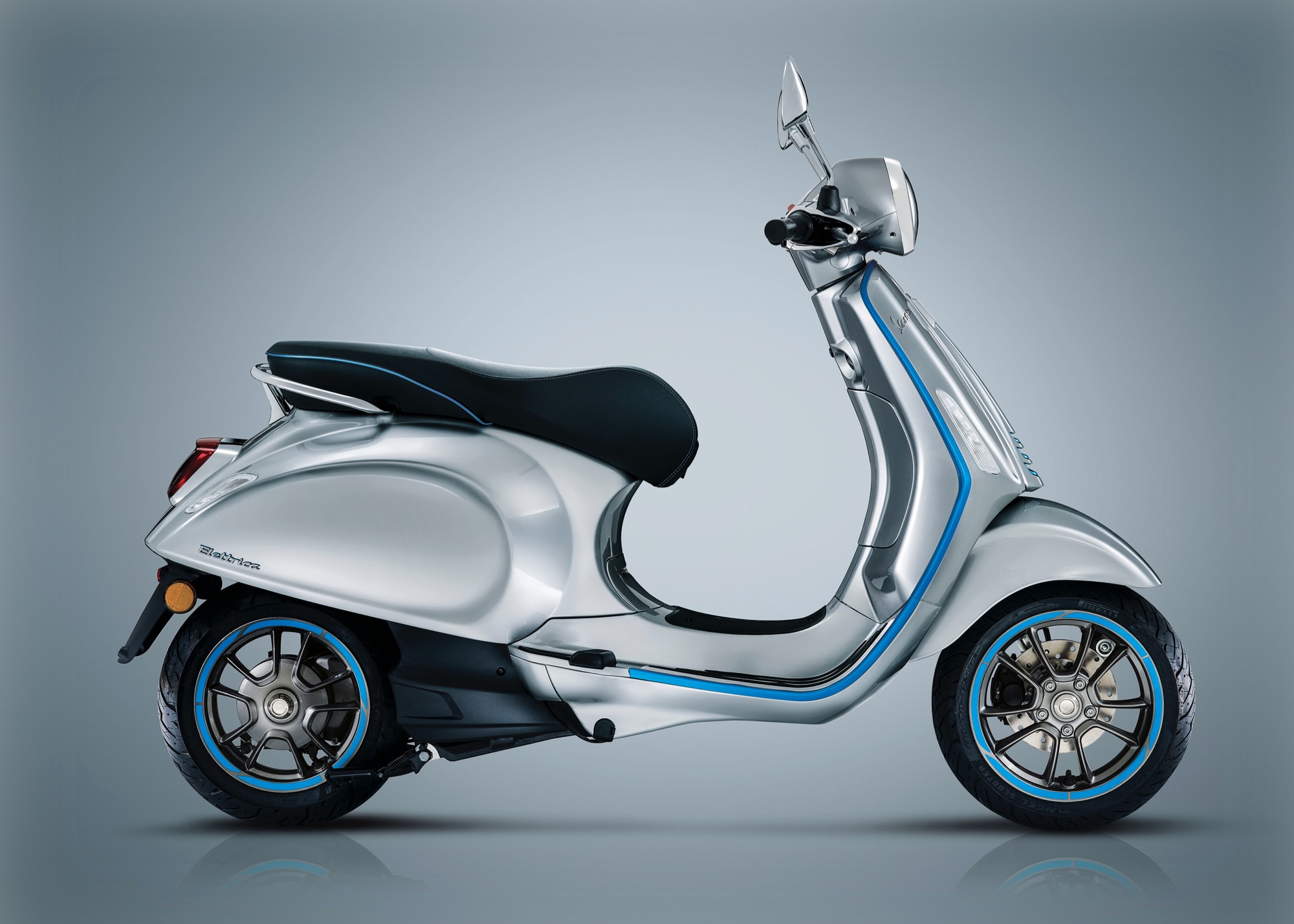 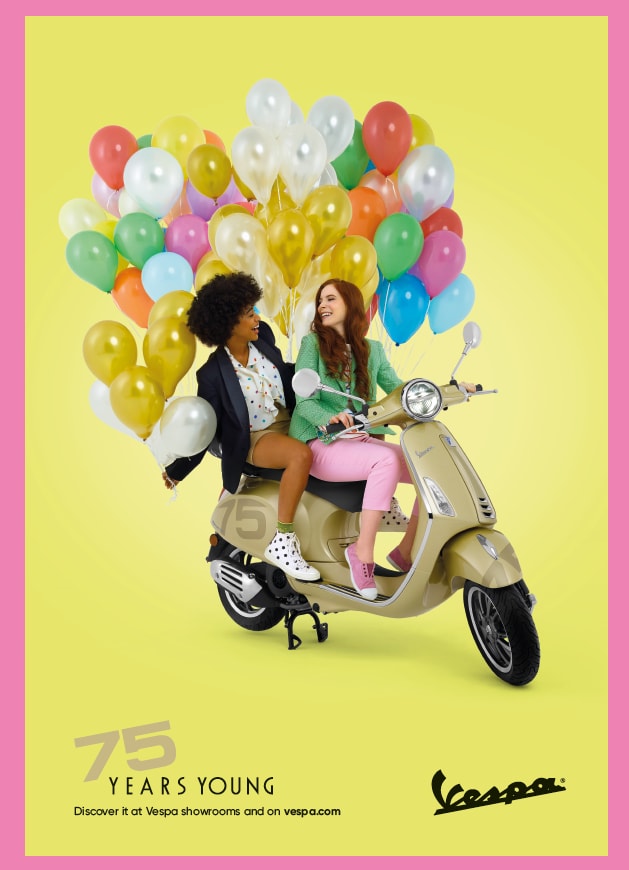