UNMISSABLE: OPEN TO ALL

APRILIA ALL STARS 2022: THE SCHEDULE FOR THE BIG APRILIA CELEBRATION IS RELEASED

In the photo, from left: Max Biaggi and Aleix Espargaro' during a previous edition of Aprilia All Stars.

ON SATURDAY 7 MAY, THE MISANO WORLD CIRCUIT WILL BE OPEN TO THE PUBLIC, FREE OF CHARGE, FOR A DAY OF PASSION, SPORT AND ENDLESS FUN FOR EVERYONE. THE GATES WILL OPEN AT 9.30 AM, WITH EVENTS RUNNING THROUGHOUT THE DAY UNTIL 6.00 PM. THE STARS OF THE APRILIA MOTOGP TEAM WILL BE IN ATTENDANCE, ALONG WITH GREAT CHAMPIONS WHO HAVE CONTRIBUTED TO THE HISTORY OF MOTORCYCLING. VISITORS CAN ALSO ENJOY FREE TEST RIDES OF THE 2022 APRILIA RANGE. BUT THE SHOW IS FOR EVERYONE, WITH MUSIC FROM RADIO DEEJAY AND M2O WITH VIC AND VITTORIA HYDE AND AN EXTRAORDINARY LIVE PERFORMANCE BY ALBERTINO. AND ONE LUCKY APRILIA ALL STARS ATTENDEE WILL WIN A FANTASTIC APRILIA TUONO 660.

Milan, 27 Apr 2022 – The countdown to Aprilia All Stars 2022 has begun, with thousands of fans expected to attend the big celebration of Aprilia bikes and champions set to take place on Saturday 7 May at the Misano World Circuit. As the gates open at 9.30 am, the fans will find a party atmosphere in the paddock. The stars of Radio DeeJay and M2O, Albertino, Vic and Vittoria Hide will entertain with their music and performances on a day that will be punctuated by a continuous series of events. 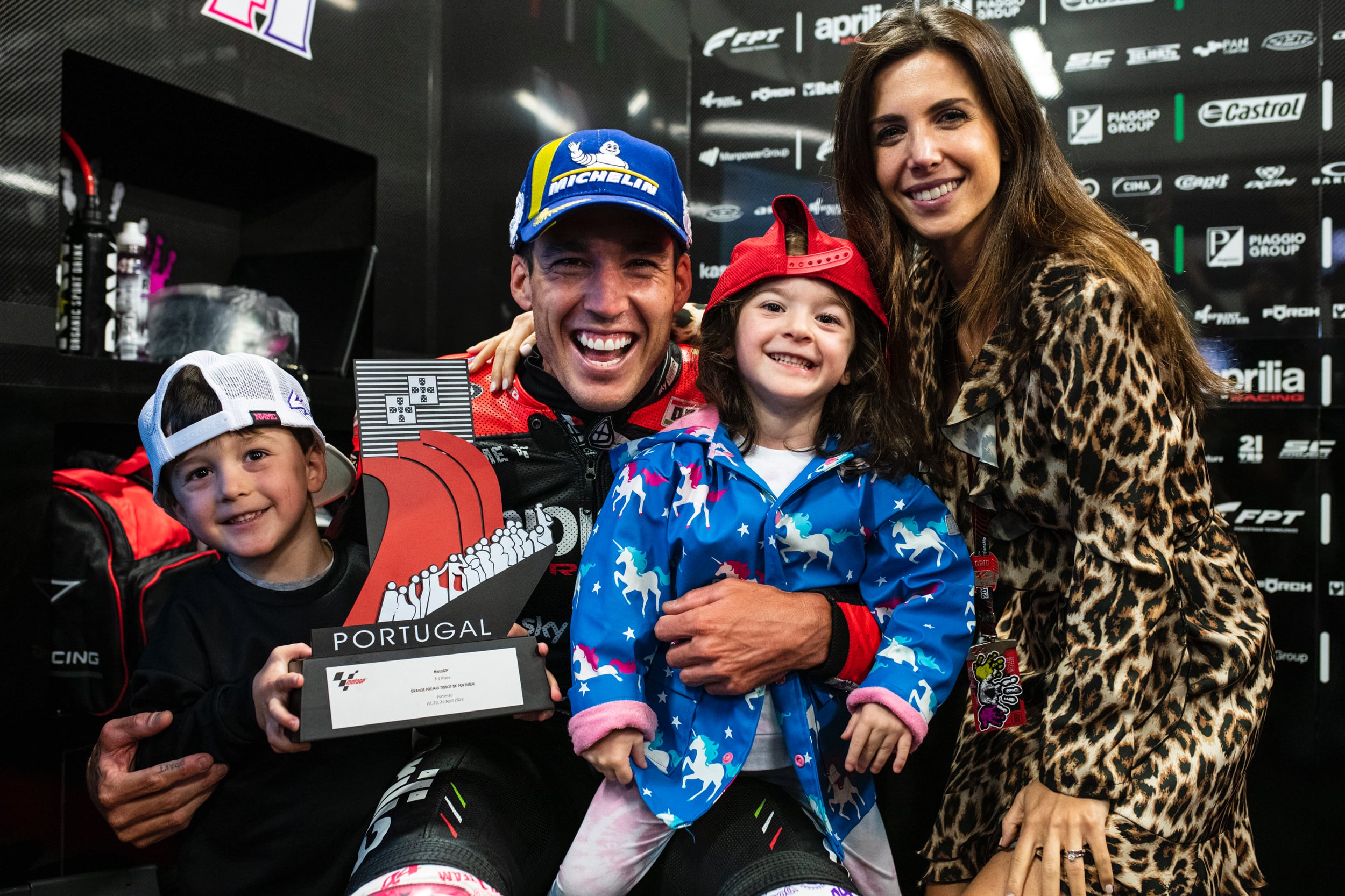 The Espargaro’ family at the 2022 Portuguese GP, with the 3rd place trophy.

Aprilia Racing riders Aleix Espargaró, Maverick Viñales and Lorenzo Savadori will take to the Radio DeeJay stage to meet the fans, sign autographs and answer the presenters' questions, alternating with some of the great Aprilia champions of the past, not least multi title winning rider Max Biaggi. 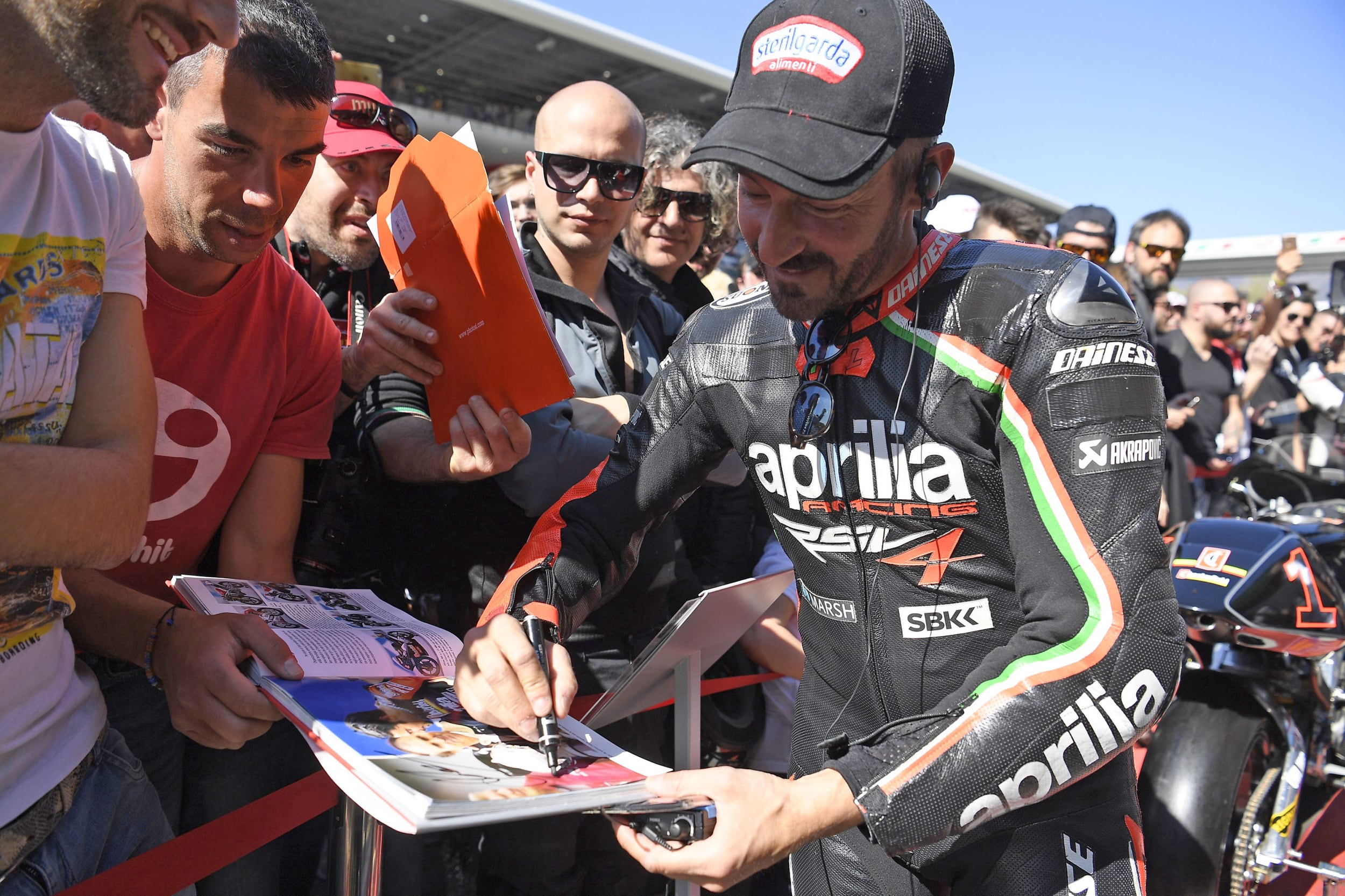 Max Biaggi during a previous edition of Aprilia All Stars.

The same champions, past and present, will also take to the track with both the RS-GP, the 2022 Aprilia MotoGP bike, and the very powerful RSV4, the successor to the bike that dominated in Superbike. The Misano World Circuit will also stage exhibitions of the legendary Aprilia two-stroke race bikes that dominated in the 125 and 250 world championship classes. Bikes that will be taken on track to mark the thirtieth anniversary of the very first Aprilia world championship title, scored by Alex Gramigni in 1992. 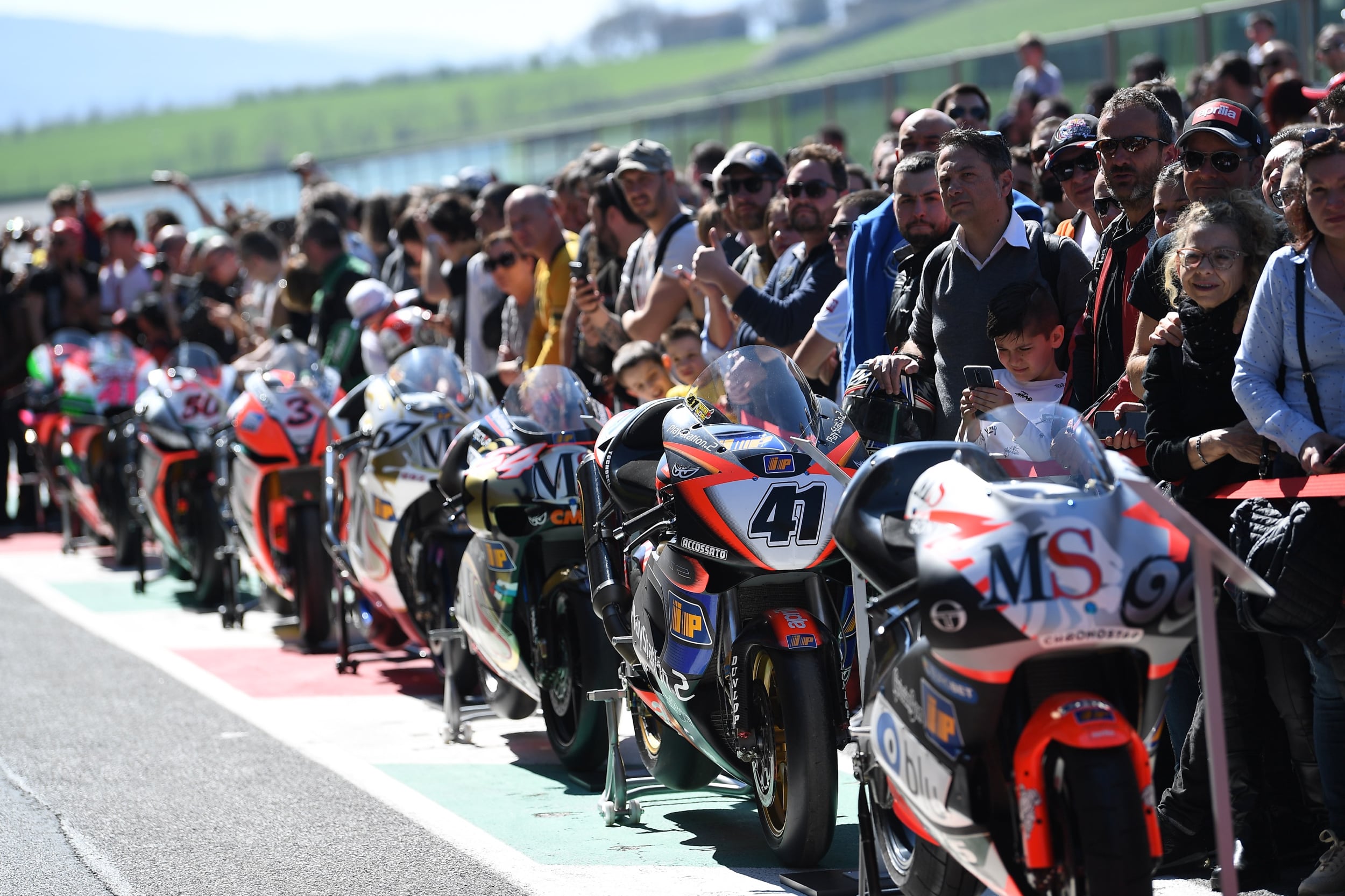 A previous edition of Aprilia All Stars.

Bikes that have remained in the hearts of every fan and become legendary, like the all-black RSV 250 with which “corsair” Biaggi ruled the world championship in the 90s, Loris Capirossi's number 65 bike, the 125 with which Rossi won his first title and the 250 that saw Manuel Poggiali crowned world champion. Bikes that can be admired up close by the public in a line-up on pit lane.
Also set to take to the Italian track are bikes from the Aprilia Sport Production 250 Italian Championship and the exclusive Tuono X, the world's lightest and most powerful production naked, ridden by Espargaró, Viñales and Savadori. 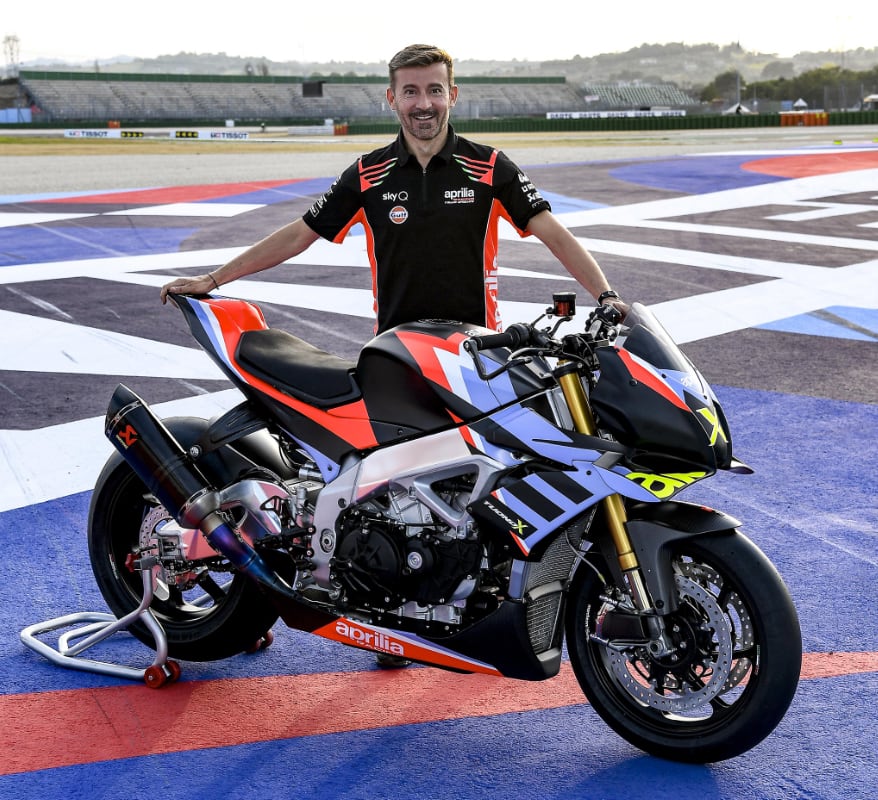 Test rides will be available from early morning until 5.00 pm. This means that everyone will have the chance to test the Aprilia RS 660, Tuono 660, Tuareg and Tuono V4, free of charge of course, during a ride on the roads around the circuit, led by professional riders.
But for the die-hard Aprilia enthusiasts, the highlight will come mid-afternoon when one lucky participant, selected from among those who enter the free raffle, will win an Aprilia Tuono 660, the bike with the best weight/power ratio in its category as well as the lightest and most technologically refined. 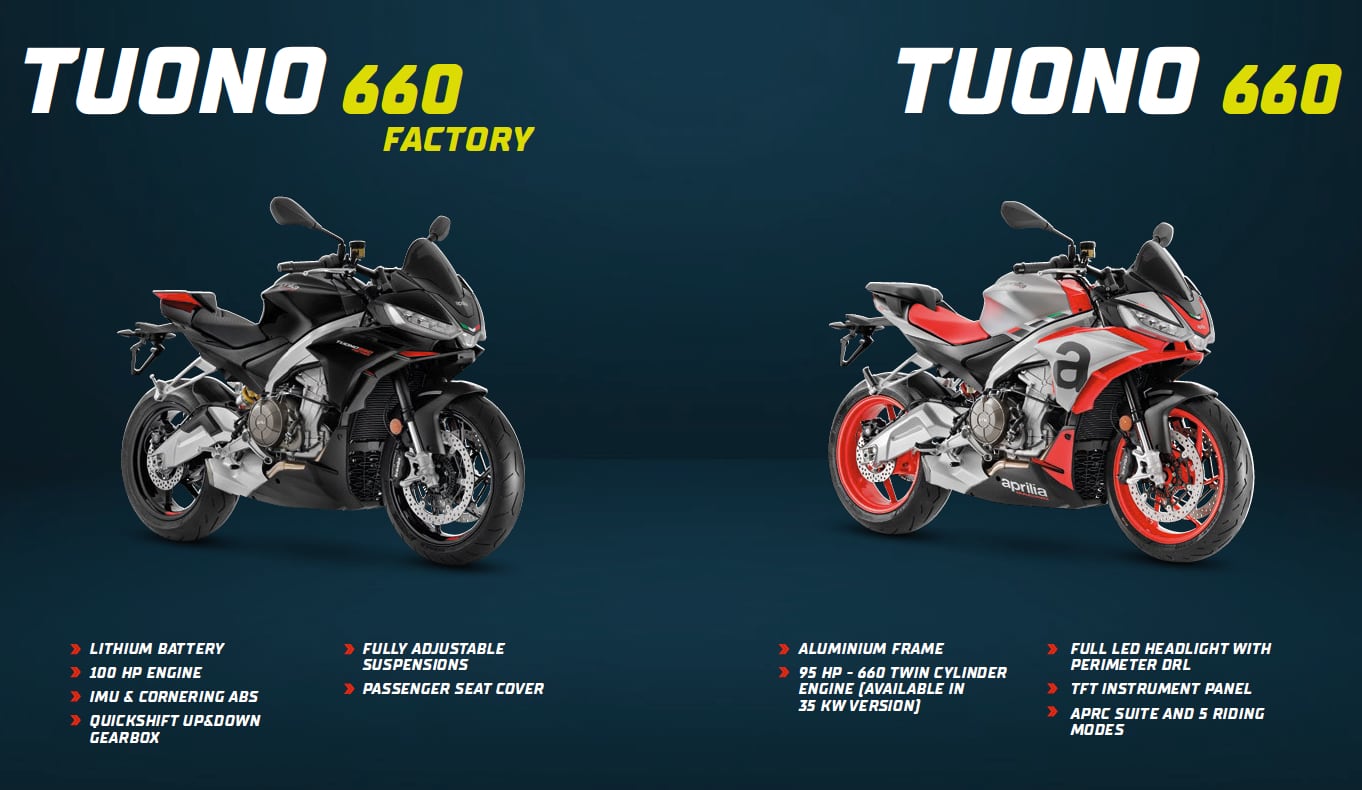 The big parade at 5.30 pm will bring all riders onto the track, as they invade the circuit aboard their own bikes for the spectacular procession that will round out Aprilia All Stars 2022. 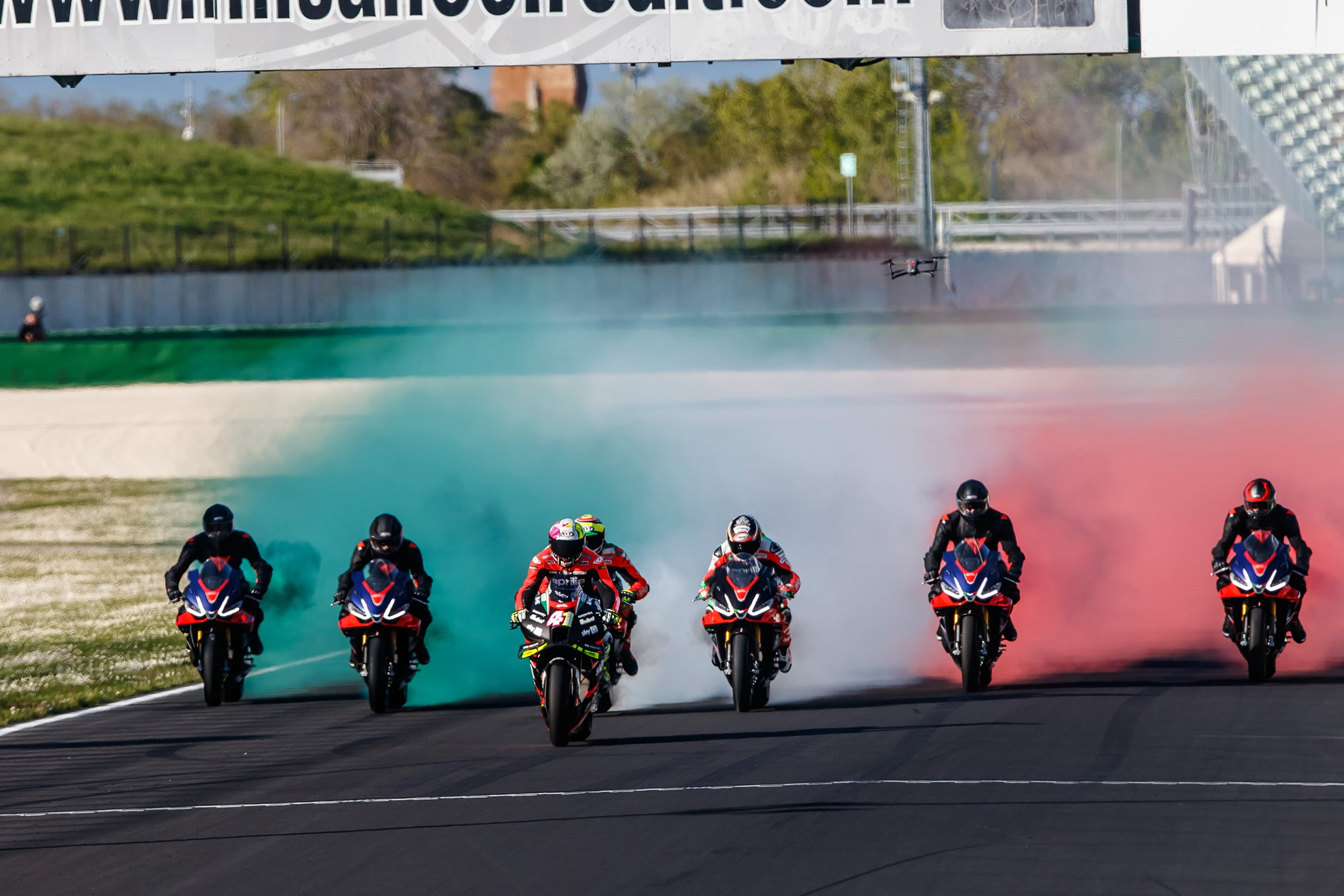 A previous edition of Aprilia All Stars. 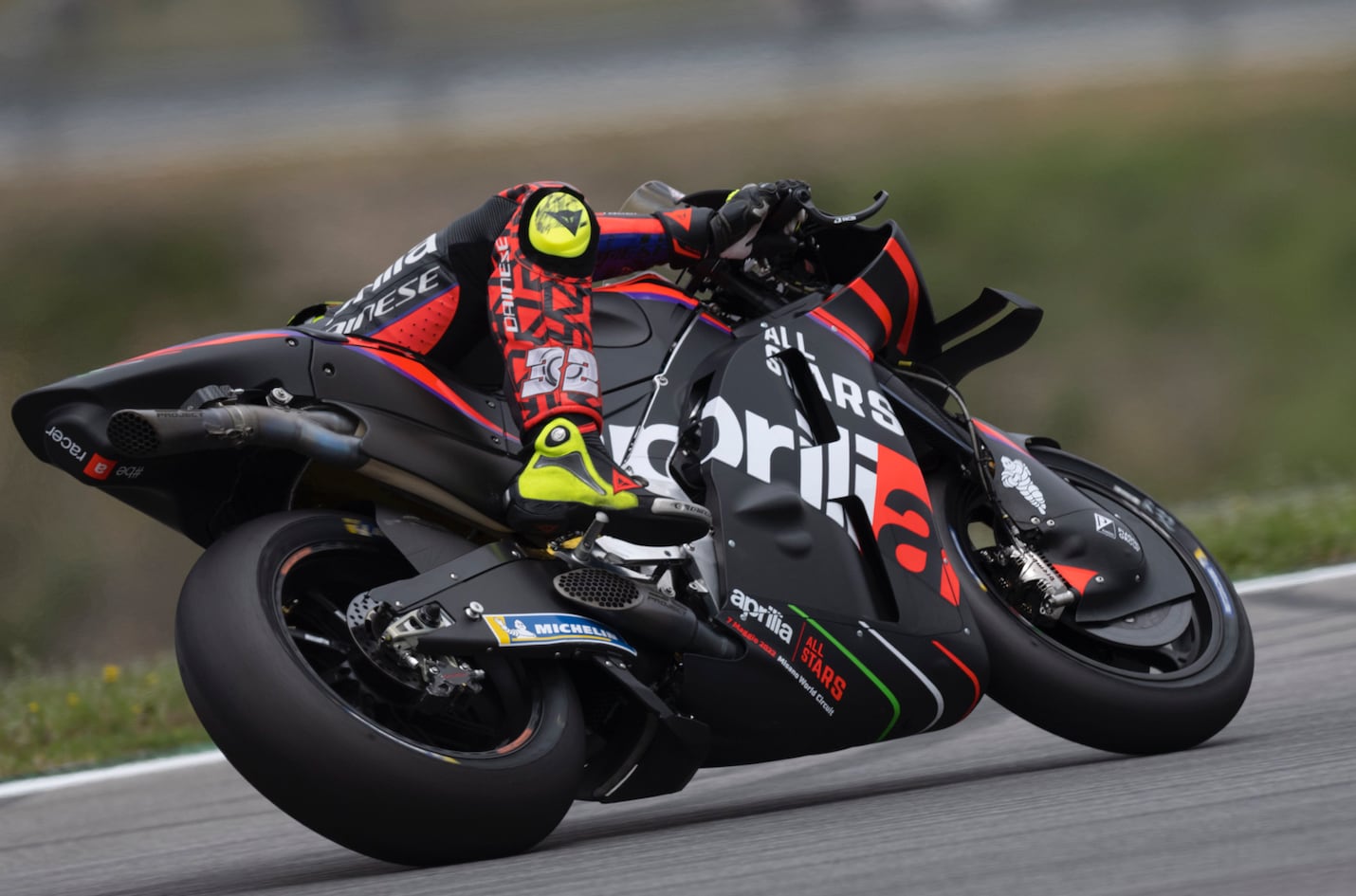 Aprilia Racing rider Lorenzo Savadori at the 2022 Portuguese GP, on the RS-GP with the Aprilia All Stars logo.