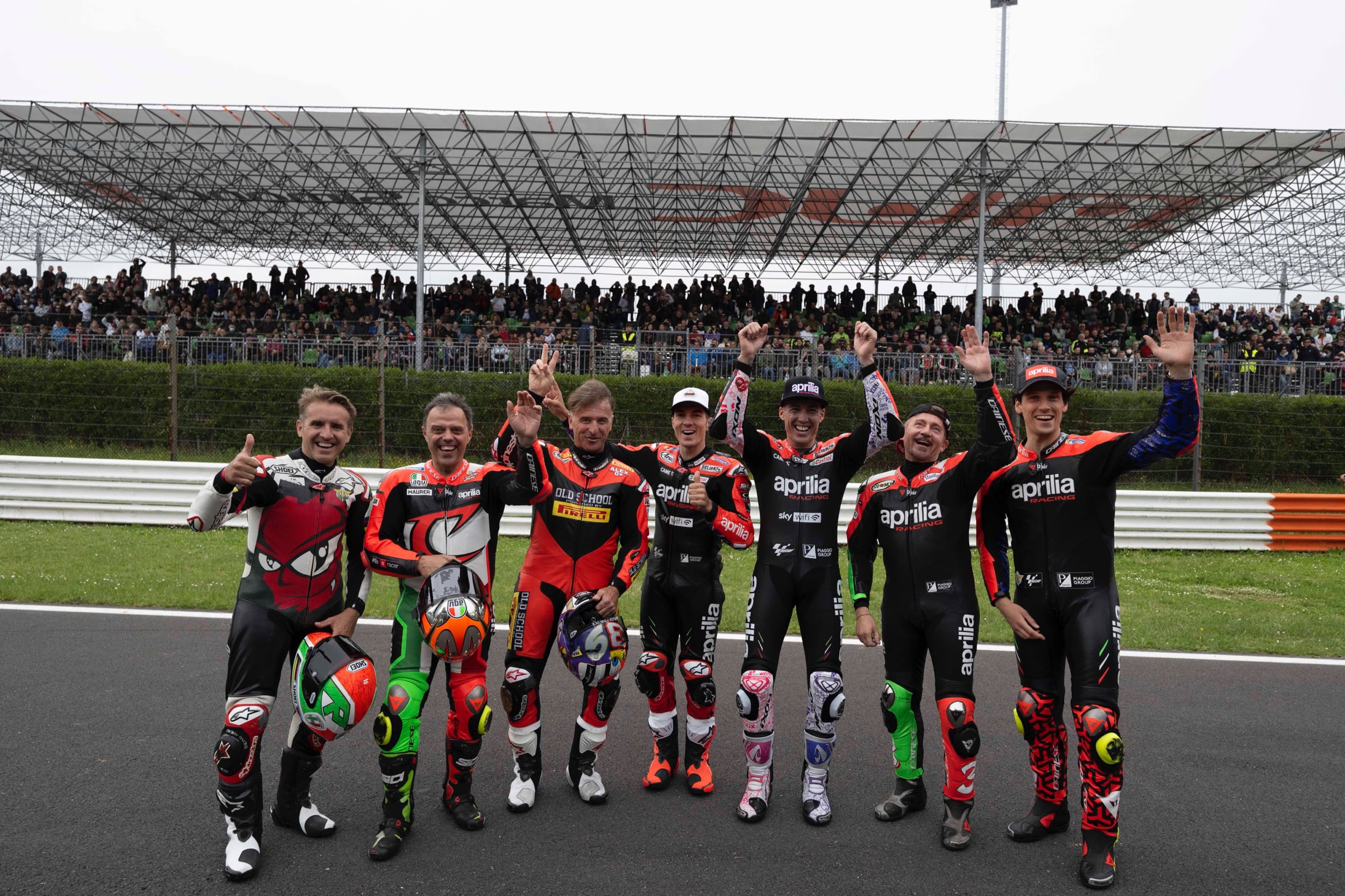 OVER 10 THOUSAND PEOPLE AT MISANO TO CELEBRATE APRILIA, ITS CHAMPIONS AND ITS GREAT MOTOGP SEASON. ALEIX ESPARGARÓ, MAVERICK VIÑALES AND LORENZO SAVADORI PUT ON A SHOW ON THE TRACK TOGETHER WITH CHAMPIONS AND LEGENDS SUCH AS MAX BIAGGI, ROBERTO LOCATELLI, LORIS CAPIROSSI, ALEX GRAMIGNI, MATTIA PASINI AND ANDREA IANNONE FANS WERE ABLE TO TRY OUT THE APRILIA RANGE IN FREE TEST RIDES WHILE THE MUSIC OF RADIO DEEJAY AND M2O WITH VIC AND VITTORIA HYDE AND THE EXTRAORDINARY LIVE PERFORMANCE OF ALBERTINO, LIVENED UP THE PADDOCK. 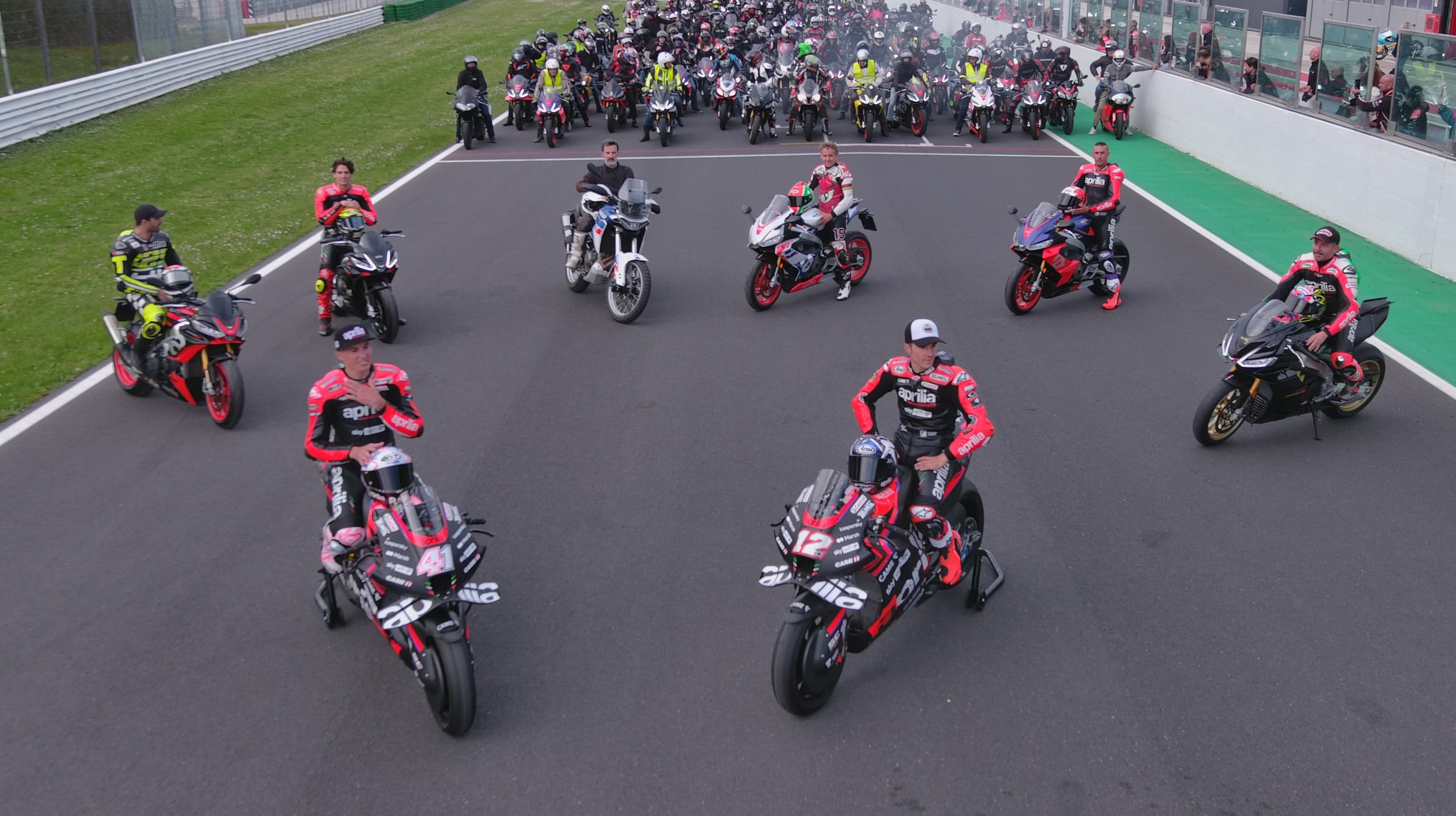 Misano circuit (Italy), 7 May 2022 - More than 10 thousand enthusiasts came to Misano for Aprilia's big party. Aprilia All Stars 2022 finally met its audience, who had been crowding the paddock and grandstands since the morning to enjoy the spectacle on track. 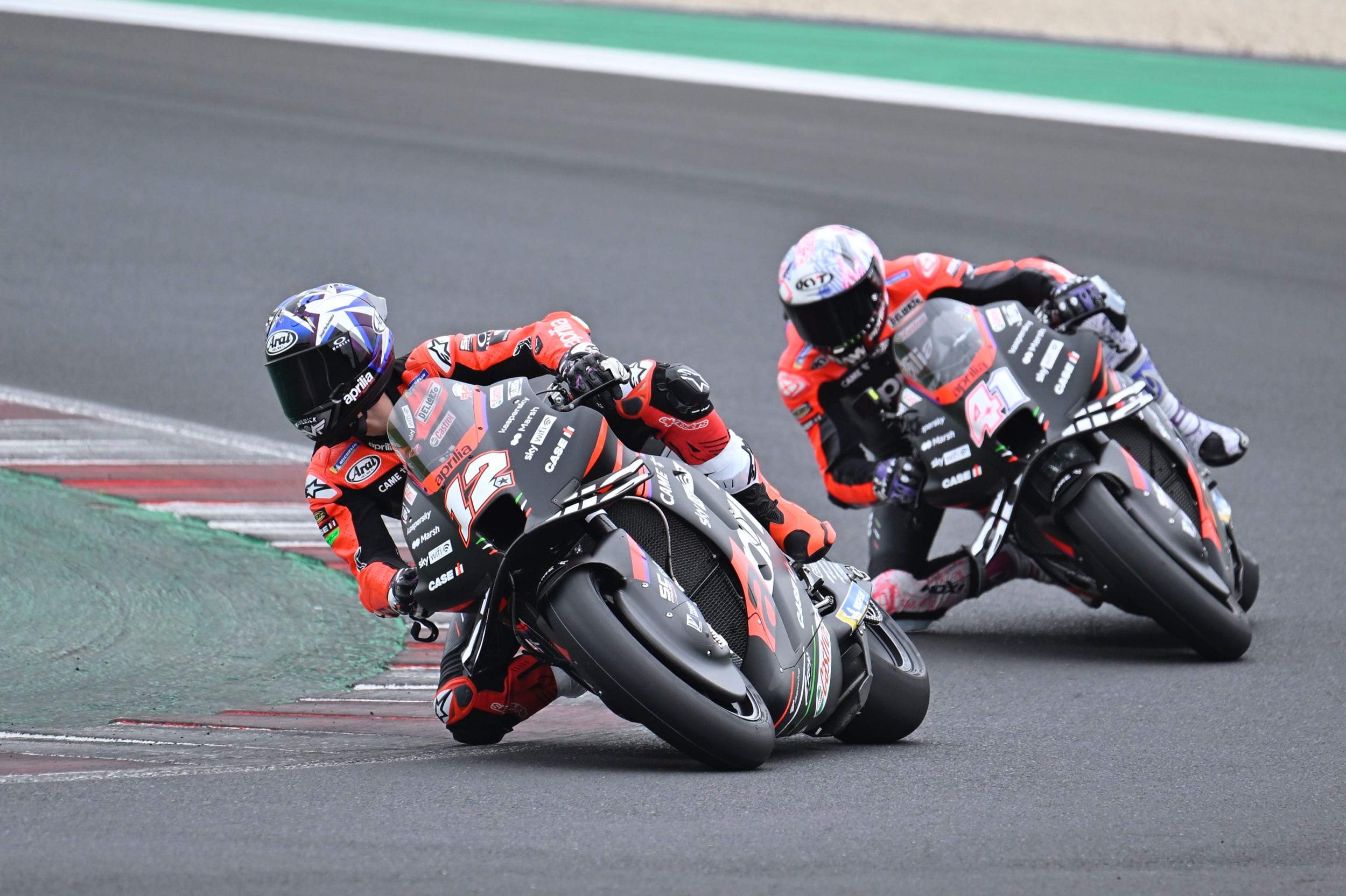 The highlight for MotoGP fans was of course the track parade of the RS-GP 2022, Aprilia's MotoGP revelation of this first phase of the season. Aleix Espargaró, with a win and two other podiums, is one of the leading riders in the world championship, while Maverick Viñales continues to gain more and more confidence with the new bike. 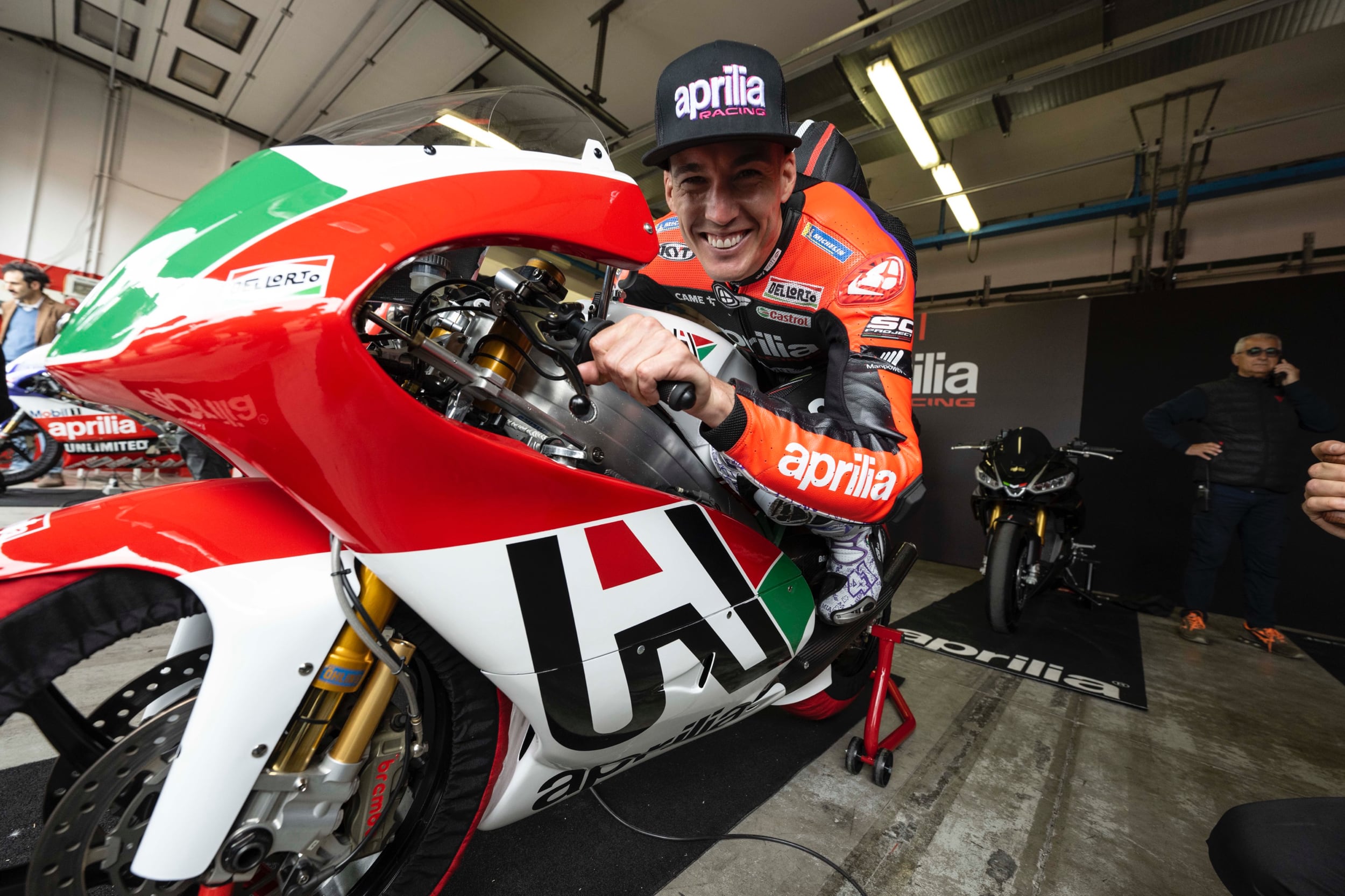 For everyone, motorbike enthusiasts, groups of friends and even the many families who came along, it was a day of celebration and entertainment, ranging from the testing of the 2022 Aprilia bikes (RS 660, Tuono 660, Tuareg 660 and the 125 range) to the fantastic entertainment provided by the stars of Radio Deejay and M2O on the big stage throughout the day. There was also a live performance by Dj Albertino, who got the whole paddock dancing, and a prize draw for the lucky winner of a brand new Aprilia Tuono 660. 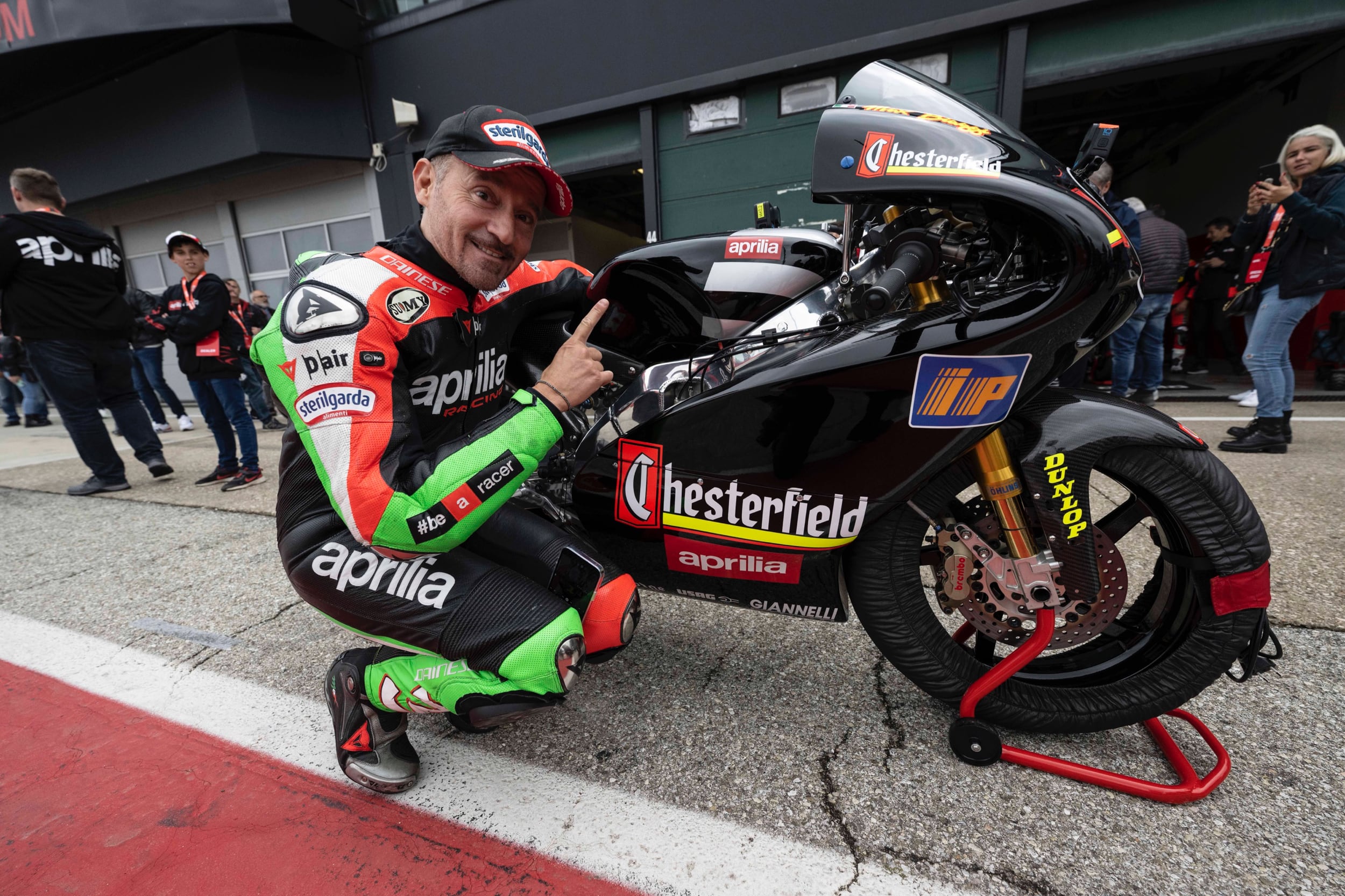 The great and spectacular parade of Aprilia motorbikes, brought onto the track by the motorcyclists who flocked to Misano, and led by Aleix Espargaró and Maverick Viñales riding RSV4s, closed the 2022 edition of Aprilia All Stars.

For all lovers of beautiful Italian motorbikes, the appointment is for the 2023 edition.