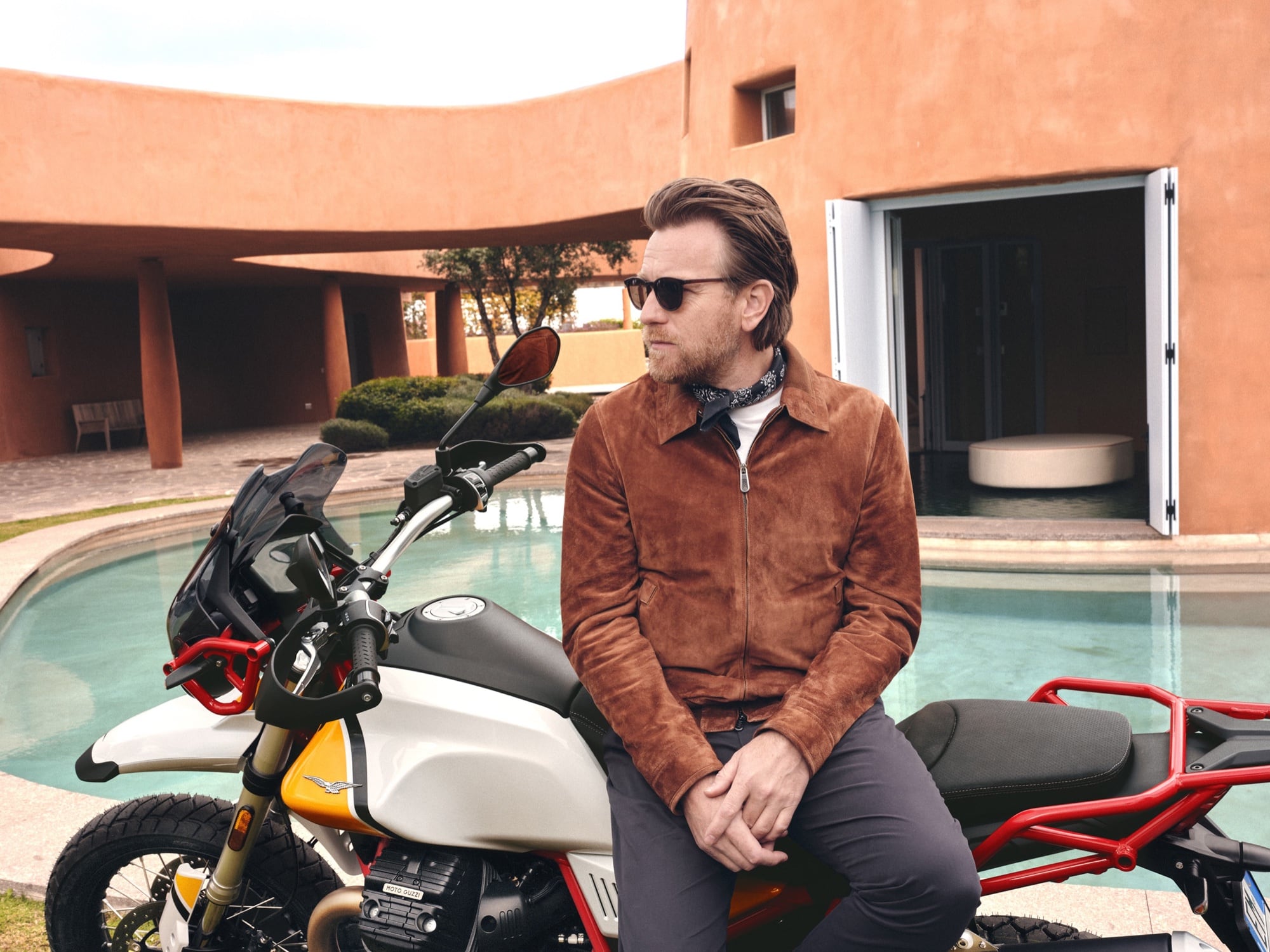 THE HOLLYWOOD STAR IS THE AMBASSADOR FOR THE V85TT, MOTO GUZZI’S ALL-TERRAIN MODEL. THE SHOOT FOR THE NEW ADVERTISING CAMPAIGN TOOK PLACE IN SOUTHERN SARDINIA IN THE SPLENDID SETTING OF IS MOLAS.

Mandello del Lario, 29 May 2019 – Ewan McGregor is back on Moto Guzzi, his true lifelong passion. The occasion was the advertising campaign for the worldwide launch of the new Moto Guzzi V85TT, the all-terrain model that takes the Italian brand into the segment of large enduro tourers. This isn’t the first time the Hollywood star, a real favourite with the public, has associated his image and his reputation as a passionate biker with Moto Guzzi: the first chapter in this fortunate partnership dates back to 2013, in Western Australia, when Ewan was the lead for the launch of the new California 1400.

The relationship between Moto Guzzi and the Scottish actor is a genuine bond, stemming from McGregor’s love of motorcycles in general, and of Mandello del Lario bikes in particular. 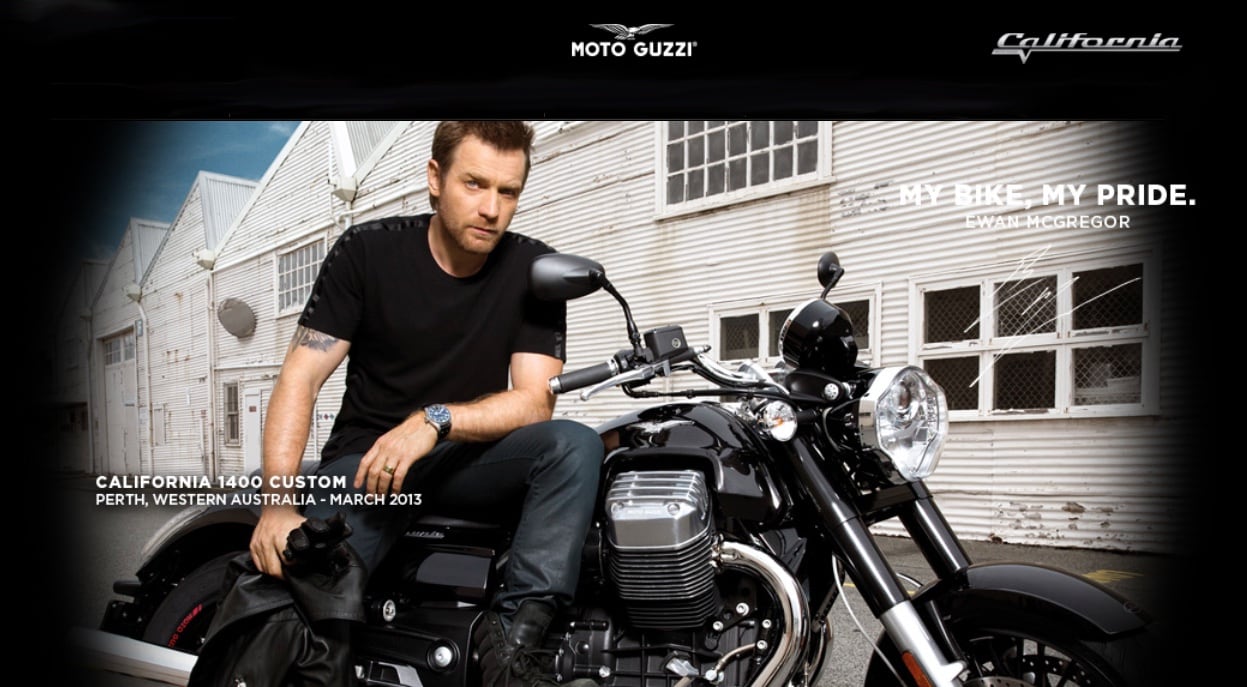 The star of more than fifty movies, including blockbusters like Trainspotting, Stars Wars, Moulin Rouge, Angels and Demons, The Impossible, T2 Trainspotting, McGregor had already recounted his passion for Moto Guzzi in the road movie“Long Way Down” when he went to Mandello del Lario to visit Moto Guzzi for the first time.

A few months later he was back in the area for the 2007 Moto Guzzi World Days, and rode back to London on his white California Vintage. 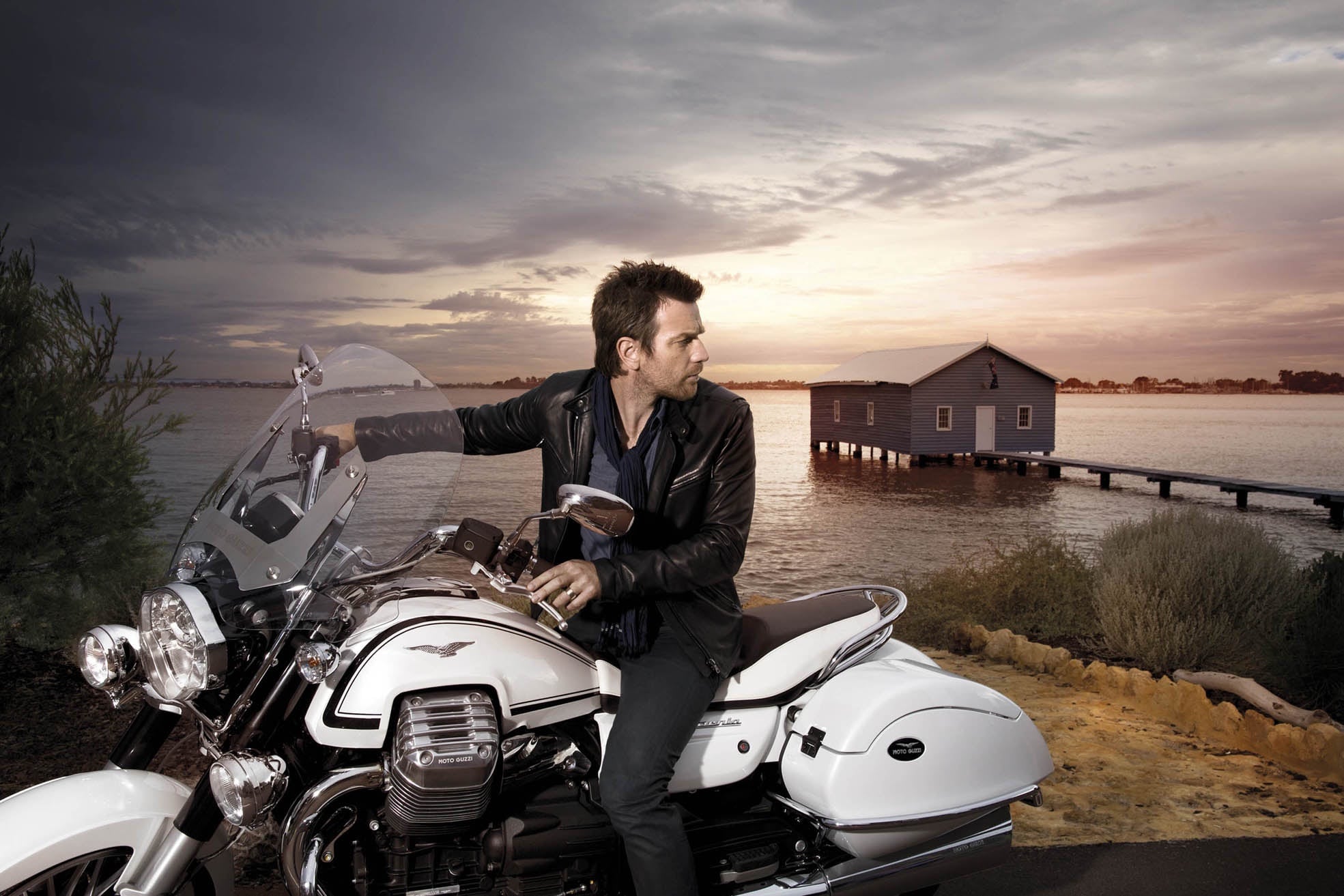 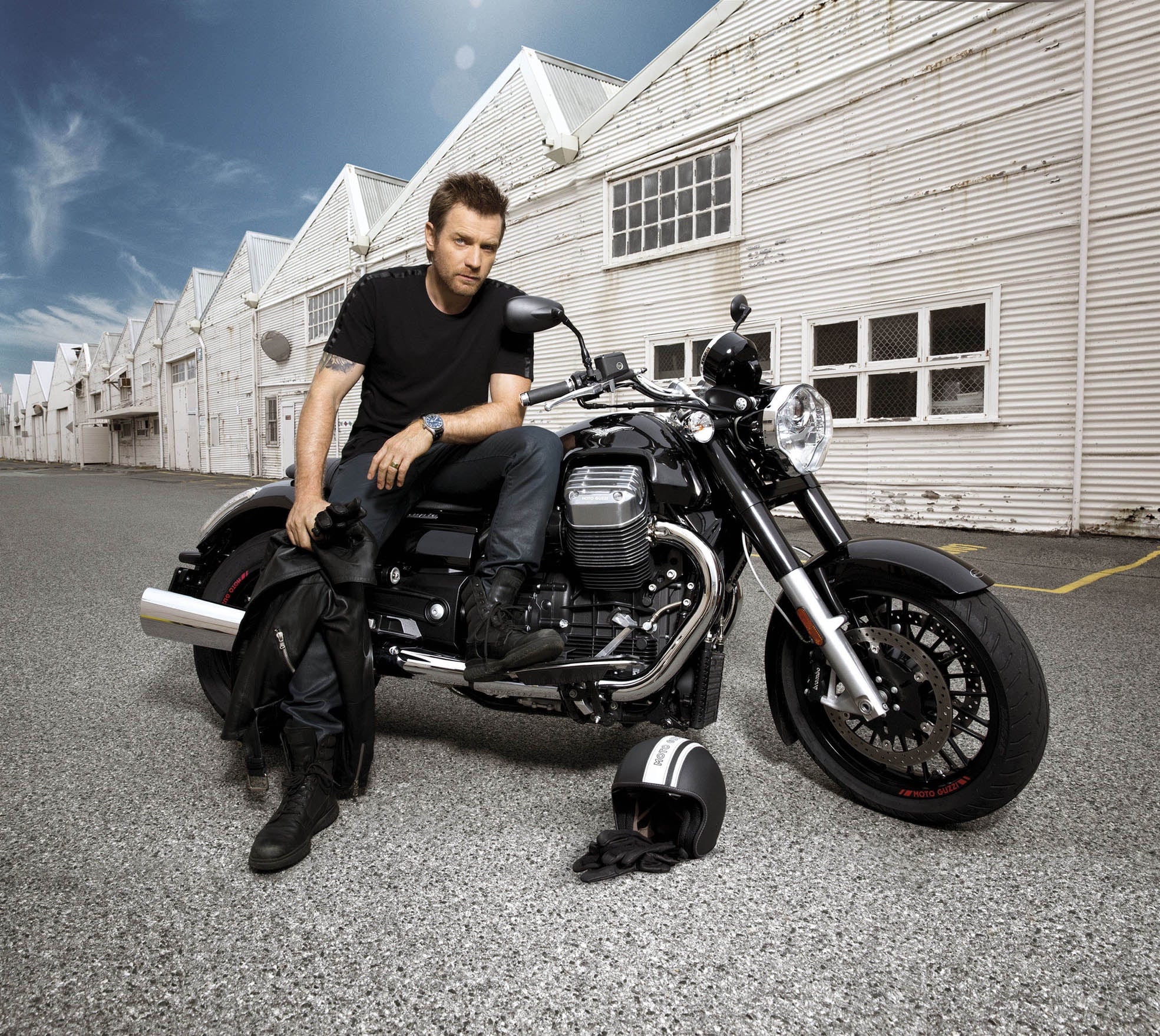 Back to today and the unique relationship continues with Ewan McGregor now fronting the campaign for the launch of the Moto Guzzi V85TT, a bike that, as always, Ewan, a true biker, wanted to take out for a test ride on the road before taking up his role as the testimonial for the model.

Adding to the appeal of the campaign production was the starting location for the actor’s journey on his V85TT, the exclusive Is Molas Resort, a gem in the splendid setting of southern Sardinia. A true haven of uncontaminated natural beauty, this corner of Sardinia offers stunning views over the sea, the mountains, and the green golf courses, a unique environment that welcomed Ewan McGregor and his Moto Guzzi bike as he left and when he returned from his rides on the tarmac and dirt roads in this little patch of paradise. 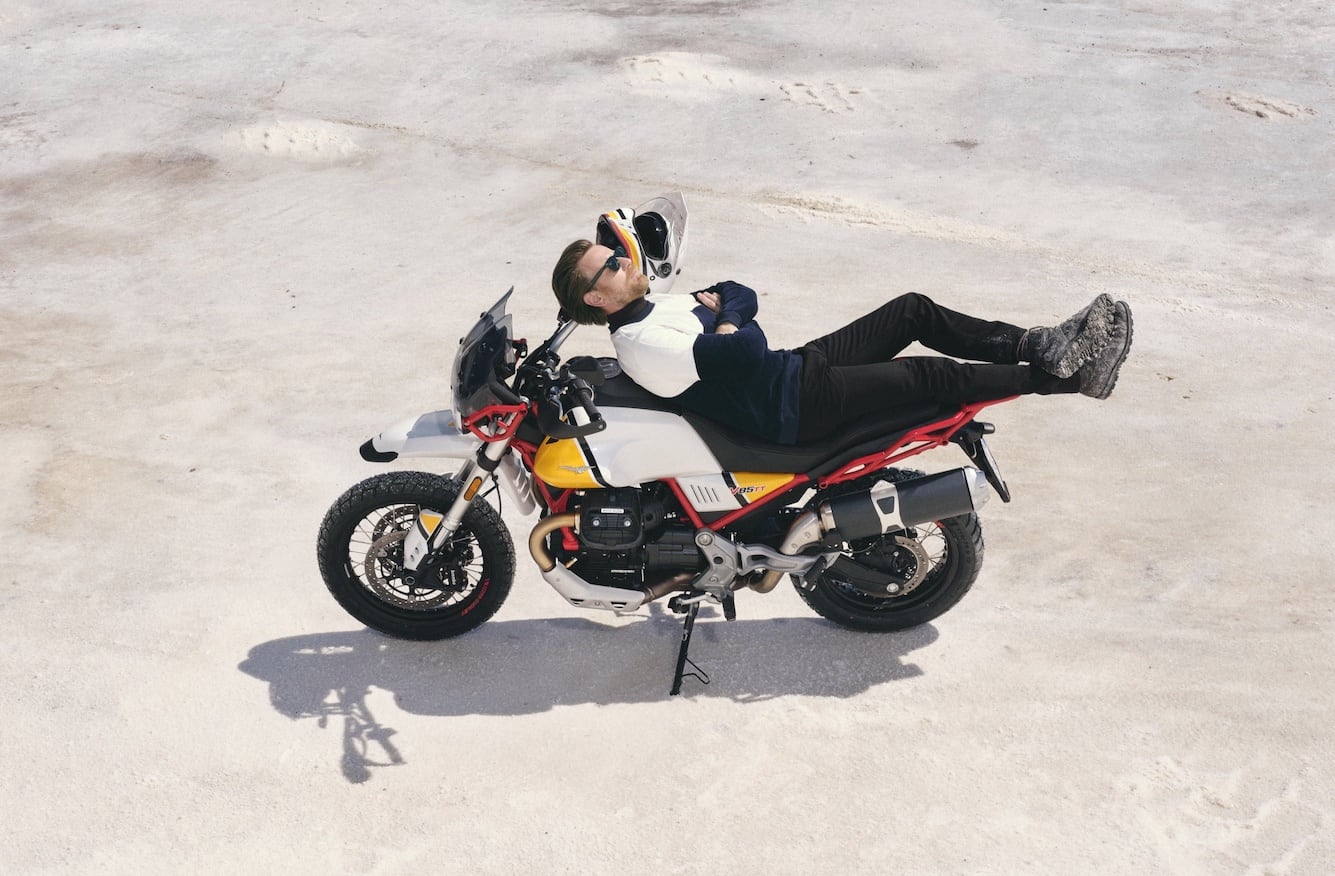 Is Molas, Sardinia, backstage on the set of the 2019 advertising campaign: Ewan & the Moto Guzzi V85TT (and in the photo below the title).

The photos of McGregor and his Moto Guzzi V85TT were taken by Paolo Zambaldi for The Ad Store Italia agency headed by Natalia Borri, which produced the campaign with art director Luca Eremo. 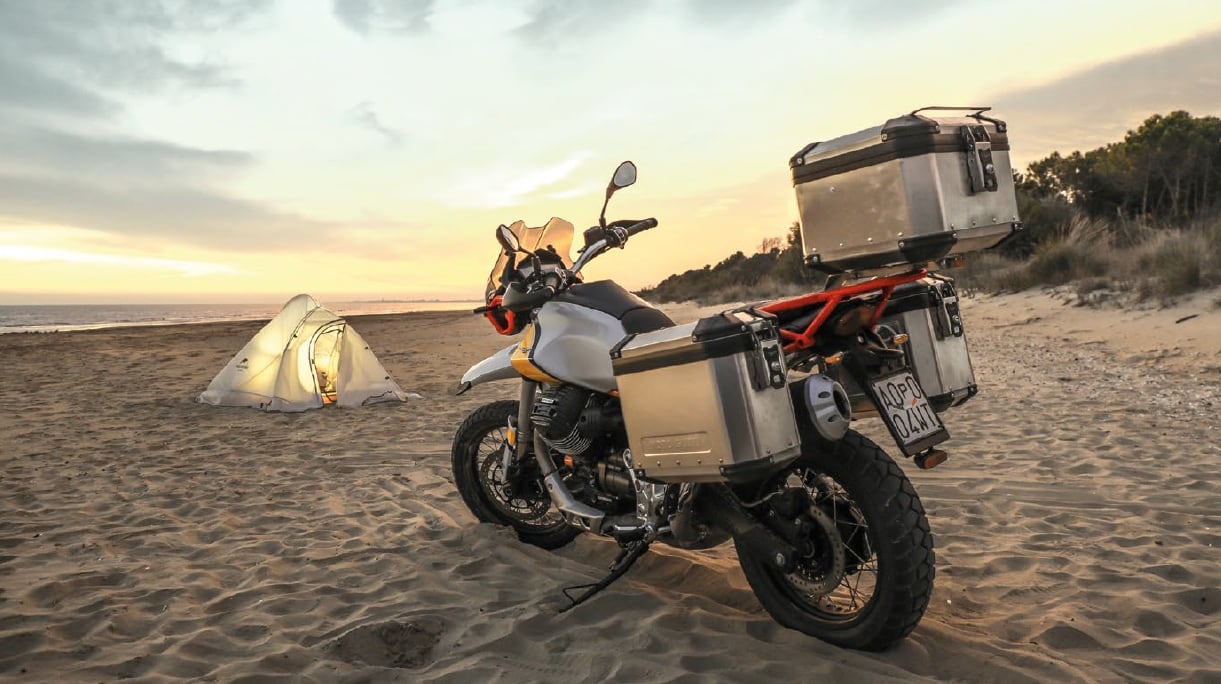 In the two months since its arrival on the market, the V85TT is confirming the huge anticipation among bikers: more than 10,000 tests booked before the bike began shipping have been organised and requests continue to arrive on the Moto Guzzi website. All the European countries are involved in the trials; the markets leading the sales are Italy, Germany, France and the UK, where demand is exceeding the most optimistic forecasts.

The Moto Guzzi V85 TT is a classic enduro tourer, delivering cutting-edge performance and technology in a two-wheeler offering the value-rich style and tradition of Moto Guzzi. The V85 TT is based on a new technical platform and powered by an original 80 hp, 80 Nm engine, a transverse 90° V-twin with a unique construction design and riding sensation. Comfortable, easy, intuitive and featuring a state-of-the-art frame, the new V85TT is a great tourer for everyone, as satisfying to ride in daily life as it is on great adventures.

The bike offers premium standard features and a huge selection of accessories to gratify every rider, on the daily commute, off-road and for touring. Features on the standard V85TT include the ride-by-wire accelerator and traction control.

With the Moto Guzzi MIA app, riders can connect their smartphone to the bike instruments, for even greater functionality.