GUZZISTI CAME FROM ALL OVER THE WORLD FOR FOUR DAYS OF CELEBRATIONS, EVENTS, MUSIC, AND LOVE FOR THE ITALIAN BIKE. THE MOTO GUZZI V100 MANDELLO WAS THE NEW AND UNDISPUTED STAR OF THE EVENT.

Mandello del Lario (Italy), 11 September 2022 – The turnout recorded at the 2022 edition of the GMG – Giornate Mondiali Moto Guzzi (World Moto Guzzi Days) – is a gauge to measure the passion that Guzzisti have for one of the most prestigious and beloved brands in the world which celebrated its first one hundred years in 2021. Not many global motorcycle brands are capable of moving more than just the rider's body with that sound and that inimitable riding pleasure, making Moto Guzzi a true lifestyle. A century of motorcycling heritage that represents a time of great pride for the entire Italian industry because Moto Guzzi has combined the ability to always look forward and innovate whilst remaining faithful to their values and traditions.

The celebration of the first one hundred years, postponed by a year due to the pandemic, was considered a must-attend event for many Guzzisti who planned their pilgrimage years in advance, resulting in all of the structures along the banks of the Lario being completely sold out.

In fact, the event hosted more than 60,000 enthusiasts in Mandello del Lario, many of whom arrived strictly in the saddle astride their motorcycles from all over the world. There were attendees from every country in Europe, but also from the United States, South America, Australia and Indonesia.

The new and highly anticipated Moto Guzzi V100 Mandello was the undisputed star of the show for this edition: present at the entrance to the Wind Tunnel in the Rosso Magma colour scheme and at the centre of the Village in the Bianco Polare version, it led the great procession on Saturday behind the Cuirassiers on the California 1400 machines, ridden by Ewan McGregor who then mingled with the thousands of fans touring the museum and factory.

There is an authentic and spontaneous relationship between Moto Guzzi and the Scottish actor. His first bike, Ewan has often said, was a used Le Mans and since then he has owned at least a dozen Moto Guzzis, the latest being a V85TT.

McGregor had already spoken about his passion for Moto Guzzi in the road movie “Long Way Down”, when he made a stop in Mandello del Lario, touring the factory for the first time. A few months later, he made an appearance on the banks of the Lario for the 2007 GMG - Giornate Mondiali Moto Guzzi, returning to London astride his white California Vintage (photos above).

On the 10th and 11th of September, pre-booking opened to purchase one of the first V100 Mandello units, exclusively at the historic plant on Parodi. From 12 September, the special pre-booking programme continues online at www.motoguzzi.com.

The museum and the historic Mandello del Lario plant, where all Moto Guzzis have been produced non-stop since 1921, recorded over 20,000 visitors, a number subject to a quota due to maximum capacity, who participated in the full programme of dedicated events.

The programme included tours of the engine and vehicle assembly lines, as well as the famous Wind Tunnel. The Museum was entirely rearranged in terms of the tour experience, with the extraordinary collection of bikes divided into three large thematic areas of production models, racing units, and military models.

The current museum anticipates the new conservative renovation project of the entire industrial plant that will make Moto Guzzi a veritable hub open to the public. The collection of rare and fascinating models is the only one of its kind in the world and includes 160 units that have just been painstakingly and minutely restored over the past months, a precious operation completely carried out by Moto Guzzi's own staff. From the first G.P. prototype and the “Normale”, which was the first mass-produced bike, all the way to the latest production models like the V85 TT.

At the centre of the Moto Guzzi Village, in the heart of the pant, music played by Virgin Radio alternated with moments of entertainment, such as the talk show where the V100 project managers explained the new eagle brand roadster in its every detail. The entire range was on display including, for the first time, the fledgling V7 Special Edition as well, featuring custom details and components, as well as two V7 units specifically tuned for the Fast Endurance Trophy and a few of the specials created by Filippo Barbacane of Officine Rossopuro.

For the Guzzisti, the most popular music was the sound provided by the range of V-twin engines (Moto Guzzi V7, V9 and V85 TT) which, placed freely at the disposal of the public, completed 800 test rides.

This concludes the four-day celebration dedicated to the most beautiful Italian motorcycles. Our heartfelt thanks goes to the Municipality of Mandello del Lario, keeper of the deep bond that joins Moto Guzzi with the history and culture of the splendid Larian territory, which managed the activities outside the factory throughout the Giornate Mondiali Moto Guzzi 2022. 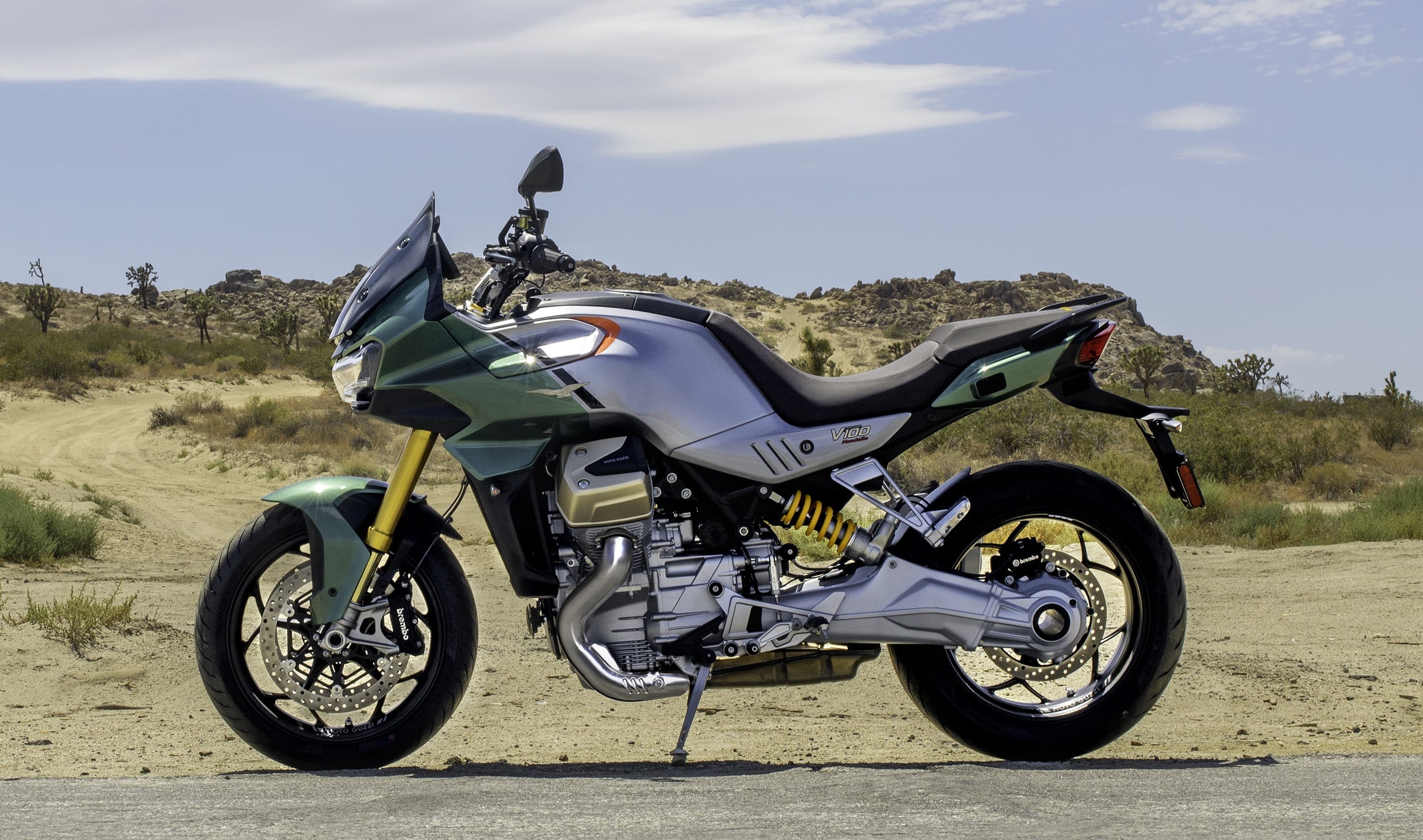 THE NEW MOTO GUZZI V100 MANDELLO IS ON ITS WAY.
wide.piaggiogroup.com/en/articles/products/the-new-moto-guzzi-v100-mandello-is-on-its-way 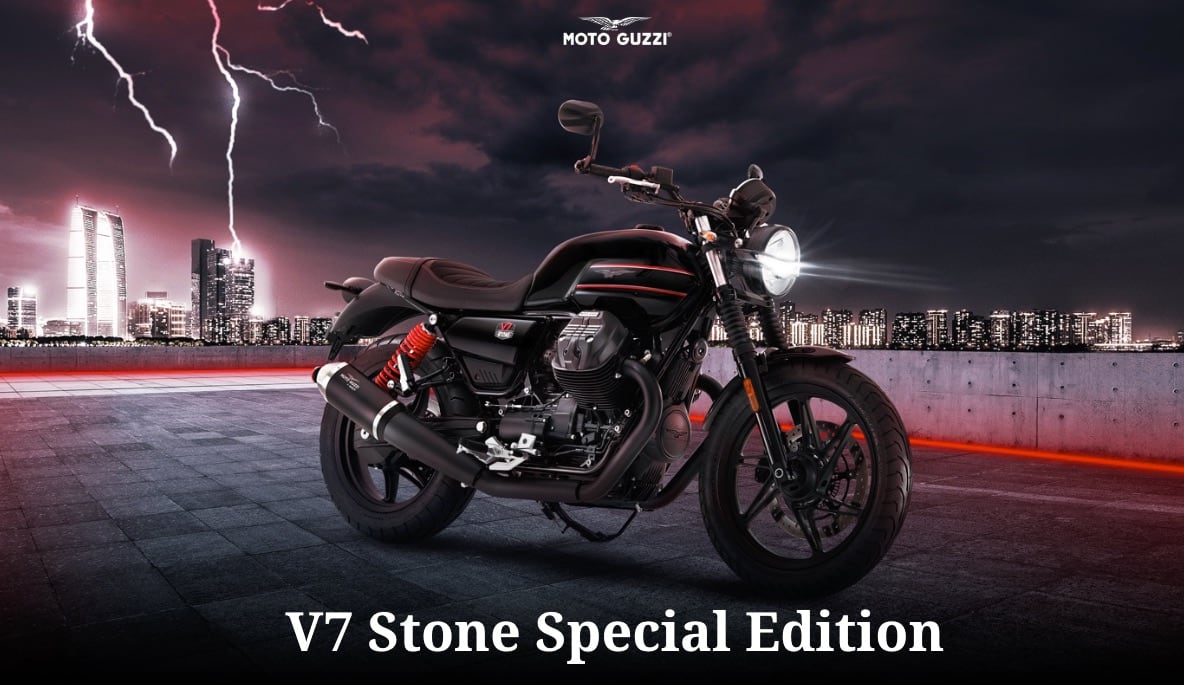