December 2022 – Of all the events in the year 2020 which is quickly coming to an end, we would be remiss not to mention the two international press launches that showcased two important new products: Vespa GTS and Moto Guzzi V100 Mandello, which our readers can read and watch videos about in the Product section and on the respective brand websites. The intention here is to provide a summary glance “behind the scenes” of the two events, thanks to the collaboration of the Piaggio Group Product and Racing Press Office, with exclusive photo galleries. 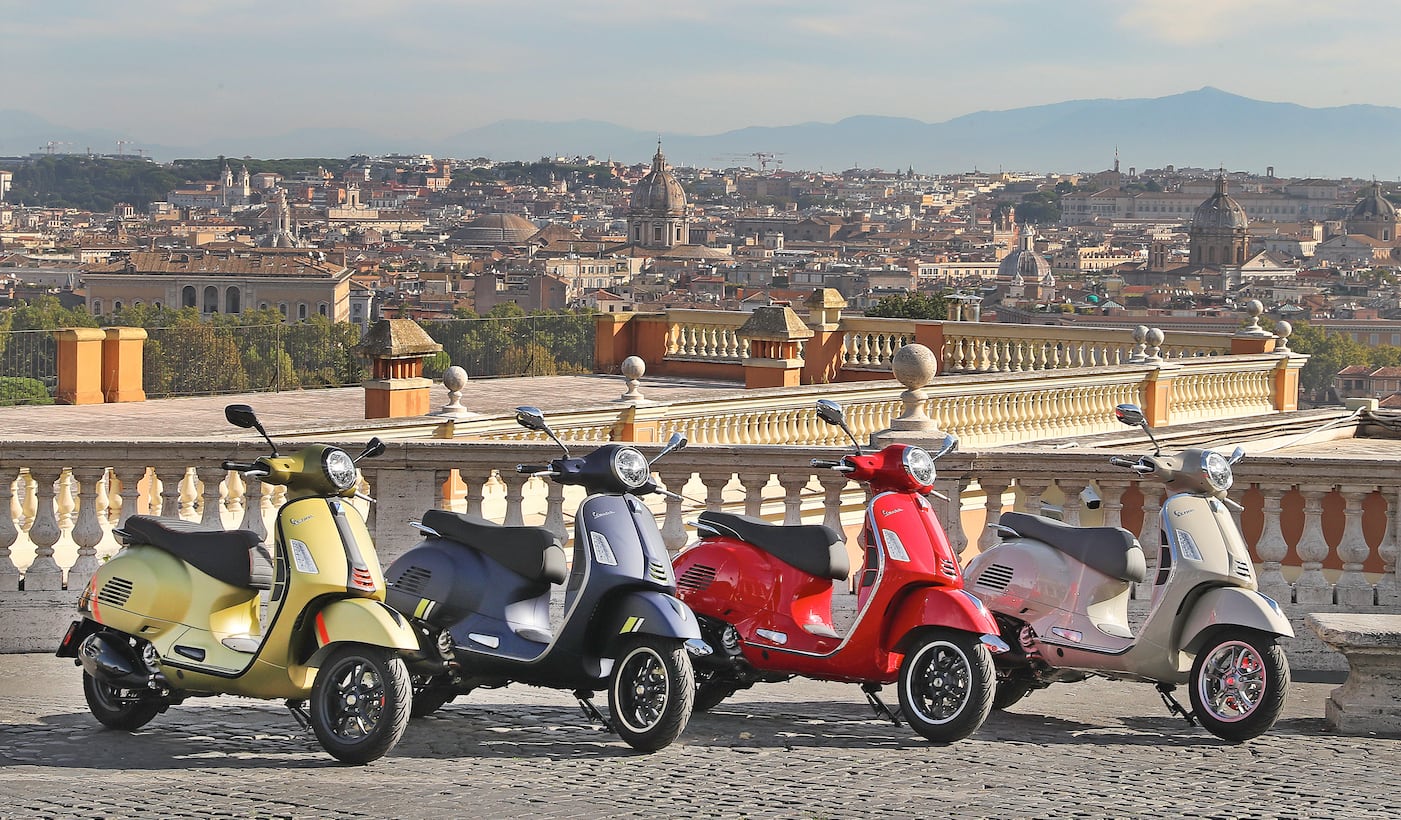 The programme included welcoming the various groups of journalists from all over Europe at the Hotel NH Villa Carpegna. This was immediately followed by the media brief in a hall set up specifically for the occasion where the corporate managers illustrated the features of the new GTS range with a Q&A session.

Evening break (to enjoy a delicious dinner from which we also “intercepted” the menu: ‘orecchiette’ pasta in a cream of cauliflower sauce, anchovies and capers, fillet of bass with aromatic herbs and seasonal side, profiteroles for dessert), with the new Vespa GTS units in various models and colours also distributed throughout the restaurant dining room.
Of course, the most anxiously awaited moment for the journalists was the test ride to put the new, high-performance Vespa GTS through its paces on the road. 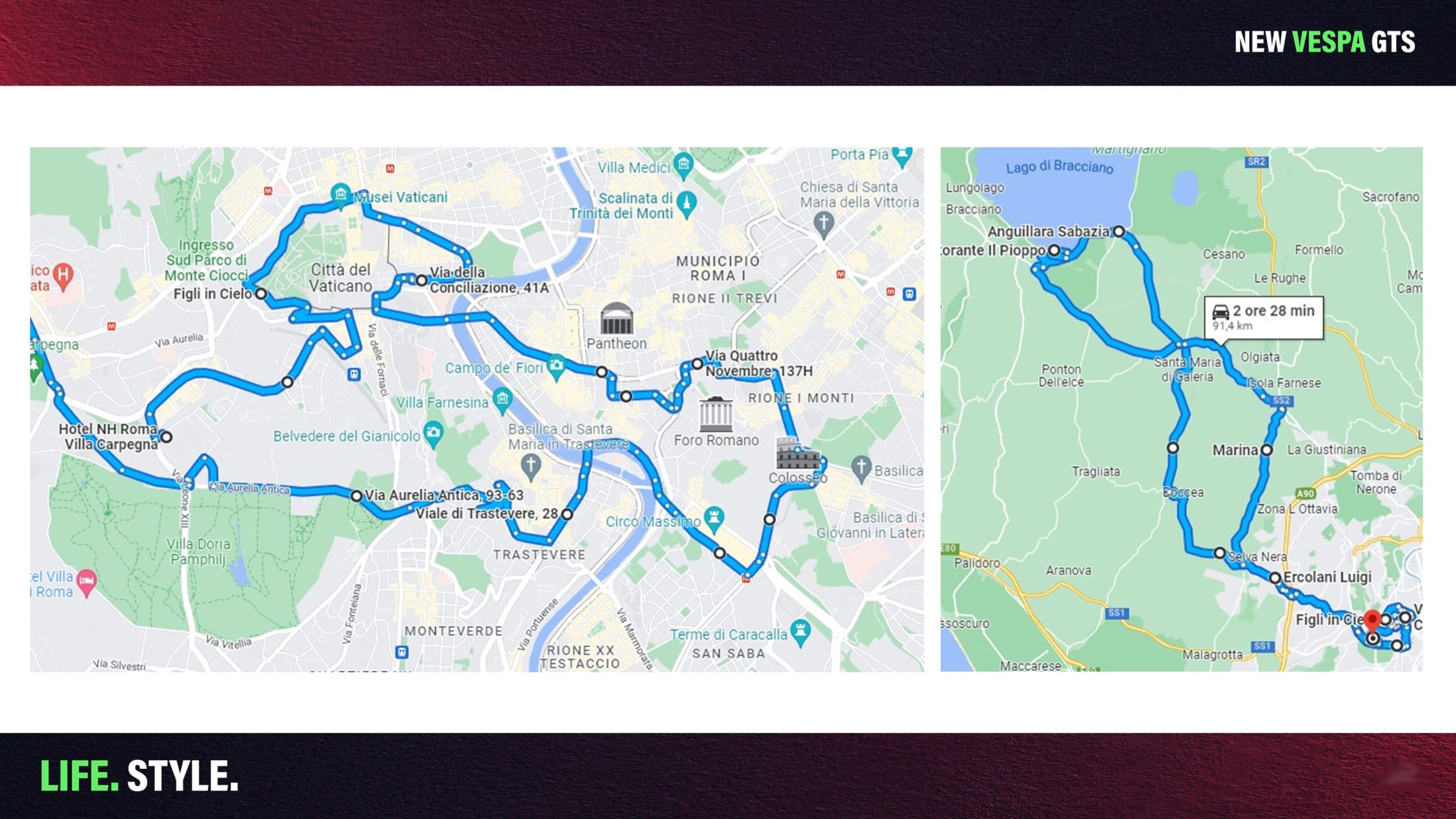 The route, custom chosen to enhance the qualities of the Vespa GTS, included an urban part that went through the most characteristic areas of Rome’s city centre and a suburban part with Lake Bracciano as the destination, for a total of just over 90 km and about 2 and a half hours on the road. A route worthy of any Vespista looking for a spectacular tour.

It was pure pleasure riding a Vespa through the heart of the Capital where “tradition” holds that some of the most important milestones in Vespa’s 76 year-long history have taken place, from press launches to anniversary celebrations, such as its first half a century of life – 1996 – and following. Photographers and videographers alike were unleashed on the city, in search of the best images. Being in extremely beautiful locations, it wasn’t at all difficult for them to capture all the Vespa’s elegance and style.
From the launch on, the abundant media review included hundreds of press and TV pieces from all over Europe and overseas, with a relaunch during the 2022 Eicma International Show in November, held in Milan Rho Fiera, where the new Vespa GTS range was presented to the huge audience at the trade fair. 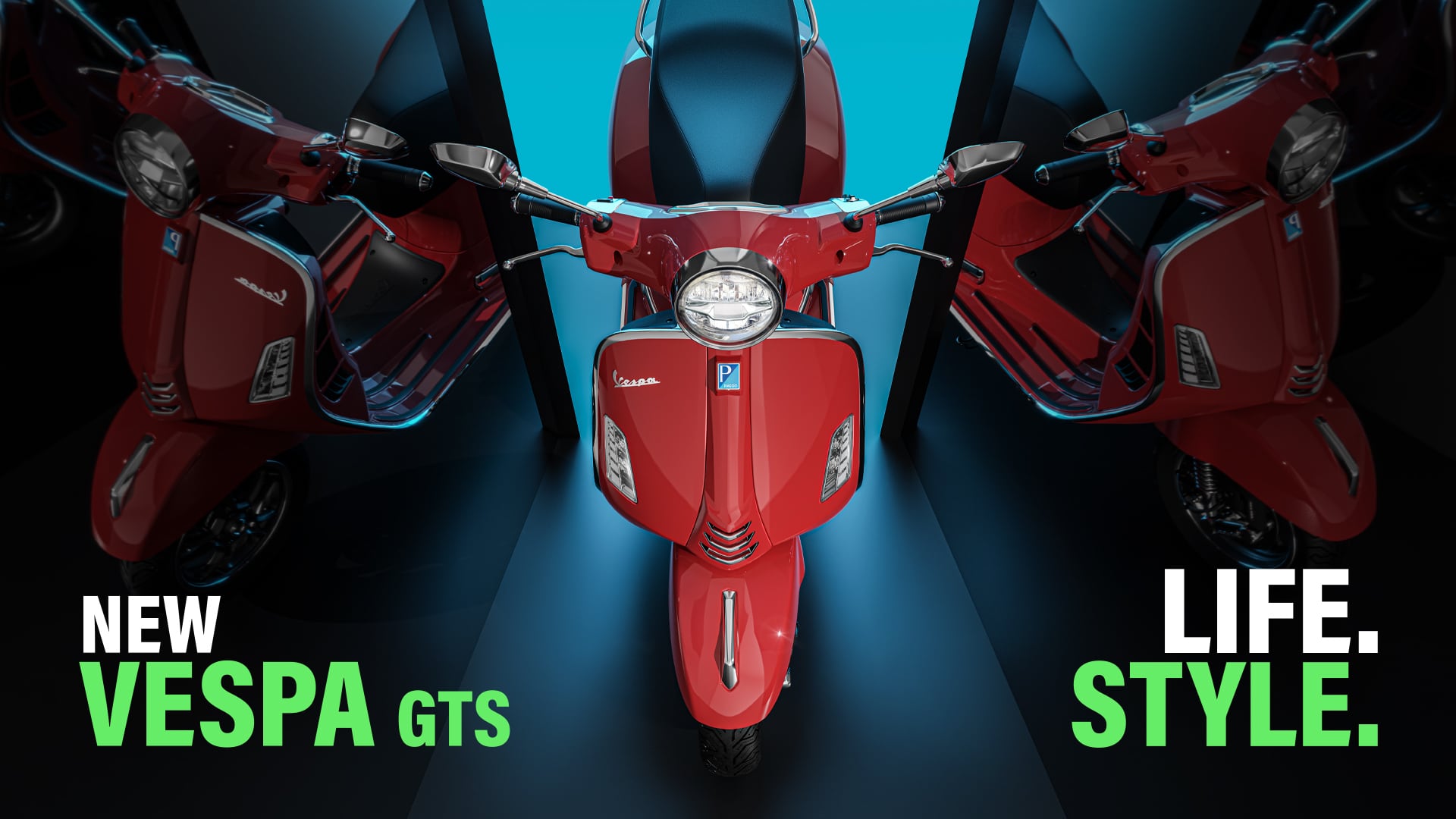 NEW MOTO GUZZI V100: ON TO THE NEXT JOURNEY. Just in time to pack and head north, to Mandello del Lario, Moto Guzzi’s native land, for the international press launch of the new V100 Mandello, which was held from 16 to 21 October 2022. About 70 journalists from 16 countries participated: Italy, Spain, France, Germany, UK, USA, Switzerland, the Czech Republic, Poland, Slovenia, Croatia, Austria, Greece, Portugal, Belgium, and The Netherlands.

Welcomed at the Hotel NH in Lecco, the groups of journalists were then taken to the Moto Guzzi plant in Mandello where, in an area specifically set up for the occasion – inside the recently renovated Moto Guzzi Museum – the media brief was held. Here, brand managers and engineers illustrated the new eagle-brand bike’s features and technological innovations such as adaptive aerodynamics, also answering the journalists’ questions.

The next day, passing through the “legendary” red gate of the Moto Guzzi plant astride the V100 units, the anxiously awaited test ride began. The route, which covered just over 100 km, wound its way around Lake Como. The first part was more curvy, passing over the Sormano Ridge, followed by lunch break in Lierna and then a second, faster part through the Introbio valley. Drawing curiosity and interest everywhere. 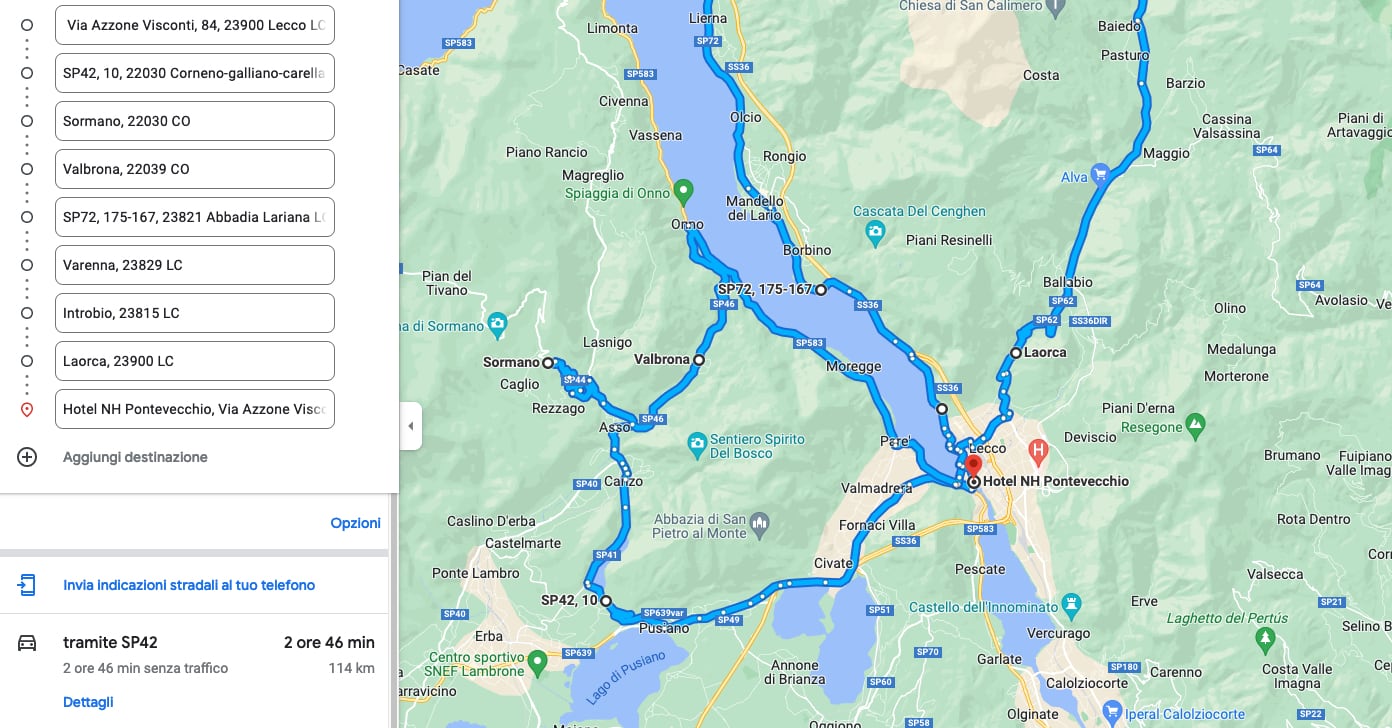 And the journalists were able to get the full experience on this astonishing bike with a dual “soul”, capable of combining the grit of a roadster and the comfort of a tourer. A bike that can travel anywhere.

After the press launch in Mandello – preceded in September by the spectacular presentation of the V100 Mandello Aviazione Navale special limited edition on the flight deck of the aircraft carrier Cavour – abundant press coverage and subsequent further test rides took place in various countries. For the worldwide media and especially for the vast public of enthusiasts, the final event of the year was the 2022 Eicma Show, where they were able to see and admire the Moto Guzzi V100 Mandello range up close and in person. 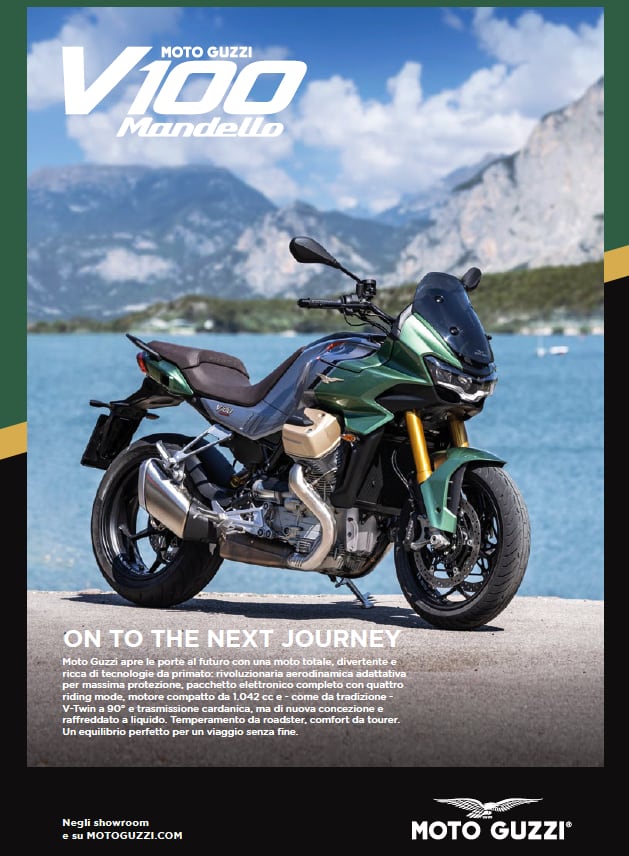