THE APRILIA 450 FROM THE 2010 DAKAR PODIUM ON DISPLAY IN “LIVING DEL CHALECO”: CHAMPION FRANCISCO LOPEZ’S BIKES AND TROPHIES, NOW WITH “HIS OWN MUSEUM” OPEN TO THE PUBLIC 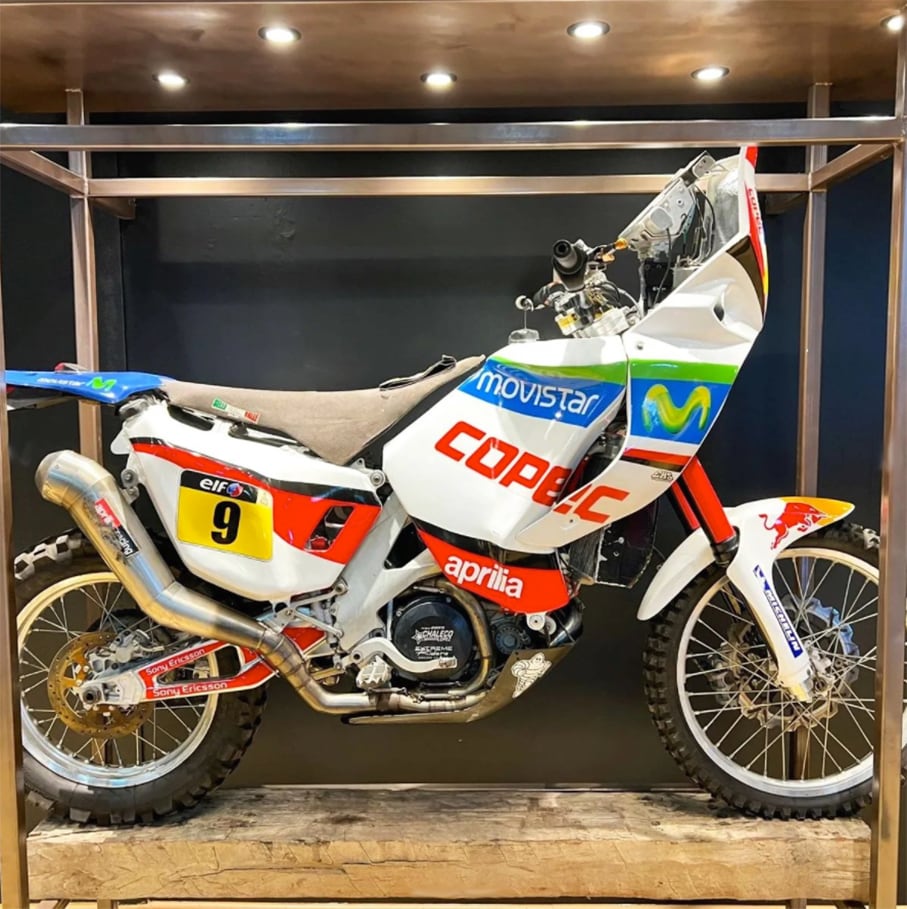 March 2022 – Recognition of a sports career marked by adventure: it’s called “Living del Chaleco” and it is the new space – within the Museo del Automovil of Viña Santa Cruz, (Chile) – that tells the story of champion Francisco López Contardo, Chilean motorcycle racer and race car driver, specialised in rally raids, through the ten most significant bikes of his sports career, trophies, helmets, and memorabilia.

(“10 bikes from my sports career, trophies, part of my story, and much more... All of my story on display in a single place, with lots of love and especially lots of passion!” Chaleco Lopez).

The “Living Chaleco” exhibit, open to the public, was opened in late January 2022 and, for the occasion, a book filled with images was created that follows the champion’s 40-year career (a true national hero), with illustrations done by his wife “Tuti”.

(“I would never have imagined having an illustrated photographic book of my sports career and today it is a reality. It is just a first version right now, but we are working to make many more! Created with much love and passion by my wife @tuti.illustration.” Chaleco Lopez).

The collection of trophies earned by Francisco López Contardo, nicknamed Chaleco (“vest”, as a tribute to his father who raced wearing a vest his wife had made), born in Teno on 15 September 1974, astride the Aprilia RXV 4.5 (Team Giofil, moto by Aprilia Racing) includes his overall third place in the Dakar and three stage wins in 2010, where other Aprilia riders also shone - Paolo Ceci and Alex Zanotti - 1st and 2nd in the SP 450 class. The rally was raced in Argentina and Chile, the first podium for Chaleco in the Dakar, with 16 stages and 9,000 km of racing. These are joined by his win in the 450 class at the Pharaohs Rally in Egypt (13th edition), also in 2010, where López finished second overall, also conquering two stage victories (Aprilia also won a third stage thanks to Gerard Farres, Chaleco’s teammate).

A great result and top-level performance for the Italian bike compared with larger engine-size competitors. Once again on Aprilia, Chaleco also participated in the 2011 Dakar, held again in Argentina-Chile, taking 4th place and 1 stage victory. He was not as fortunate when is participated in 2012: 1 stage win and a DNF overall.