BETWEEN ARCORE AND THE MONZA RACETRACK

THE “GILERA MEETING” IS A HUGE SUCCESS: ENTHUSIASM FOR THE BRAND OF THE TWO INTERTWINED RINGS IS STILL HIGH

7 June 2022, Italy - The Registro Storico Gilera (Historical Gilera Register) and Gilera Club Arcore successfully organised the “Gilera Meeting” (4 and 5 June 2022), an international event taking place every five years that is back after seven years. A single, fundamental goal: to keep the memory alive and attention on a brand that has contributed to making national and international motorcycling history. The event took place within the Monza Sport Festival (promoted by the Monza and Brianza Sports Society Union), under the aegis of Federazione Motociclistica Italiana(FMI; Italian Motorcycling Association) and with the cooperation of Gilera Club Arcore, the Monza Moto Club ‘Oscar Clemencigh’ and the Moto Club Carate Brianza.

The two days activities were located between the Arcore Villa Borromeo Park and the Autodromo Nazionale di Monza (The National Monza Racetrack); the motorcycles that characterized the production of the Gilera Brand during its long and successful history, then paraded in the “Temple of speed”, that this year turns its first 100 years (the circuit was inaugurated on September the 3rd 1922).

With the support and the experiences of the past editions 2000, 2005, 2009 (the last one was pulled one year earlier to celebrate the centenary of the first motorcycle built by Gilera in 1909) and 2015, the Gilera Historical Register and Gilera Club Arcore put together a fantastic weekend dedicated to the everlasting passion for the Trademark of the two intertwined rings from generation to generation.

Gilera Meeting 2022 - On board, parading in the city of Arcore.

With engines rumbling, on the morning of Sunday, 5 June, the long procession of vintage bikes accompanied by a highway police patrol, a Carabinieri patrol, and two vehicles from the Arcore Civil Protection unit rode through the city streets before heading to the Autodromo Nazionale di Monza, where the Gileras owned by the participants from all over Italy and abroad (Germany, France, Switzerland, and other countries) took three laps around the track.

2022 Gilera Meeting - On board on the Monza Circuit.

After this came the Gilera racing bikes parade which echoed the unmistakeable rumble of the “Rosse di Arcore” in the Temple of speed. Leading the procession of vintage bikes on the way to Monza was the Mayor, Maurizio Bono along with Daniela Confalonieri who has been the press office secretary of the organisation associated with the Trademark of the two intertwined rings for 17 years, followed closely by former Dakar rider Roberto Mandelli, who rode his fantastic Gilera RC 600 Silhouette through the streets of Arcore and on the Monza track.

THE AWARDS. Back in the Villa Borromeo Park, the awards ceremony at the end of the meeting included the traditional photos of the Gilera Historical Register members who handled all the aspects of setting up the event. Representing the local organisation, Giorgio Cereda, Angelo Molteni, Alfonso Savoldelli, Primo Brioschi, and Adolfo Brioschi lifted the trophy dedicated to the member Michele Cantù and his mother Delia Perego. Afterwards, the trophy dedicated to Eugenio Savoldelli was accepted by the youngest participant, namely Paolo Volpe (born in 2002), the one dedicated to Nino Brioschi by the most numerous foreign group that came from Holland, and the one dedicated to Egidio Passoni to Belgian Yves Campion.
The trophy offered by the Lombardy FMI was accepted by Nino Bigi for the oldest Gilera brought to be displayed in Arcore, a splendid 1922 three-fifty VL, whereas the Autodromo di Monza trophy was accepted by the person who represented the Trademark of the two intertwined rings in all the celebratory activities of the event, namely the Dakar rider, Roberto Mandelli. Plaques were dedicated to the historic mechanic of the Gilera Racing Department, Arcore native Luigi Colombo (who will be 97 at the end of June) and the Mayor, Maurizio Bono, impeccable in his role as great supporter of the Arcore-based Brand. 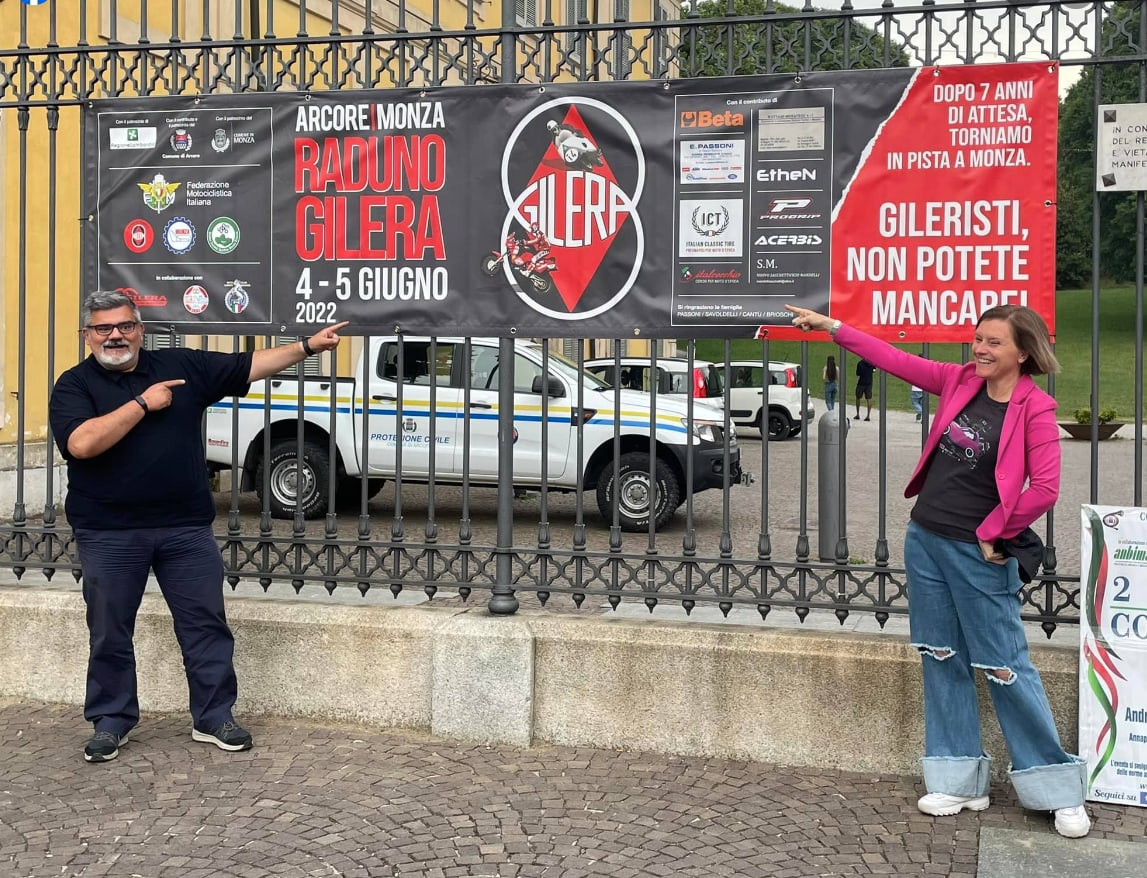 From the left, Arcore Mayor Maurizio Bono and Daniela Confalonieri of the Gilera Historical Register.

All the sponsors of the international event were also recognised with awards, namely Beta Utensili, Progrip, Egidio Passoni dealership, Rottami Meratese, Ethen Italy, Acerbis, Italian Classic Tire, Italcerchio, and Nuovo Sacchettificio Mandelli, as well as Arcore Moto Club Gilera (presided over by Giancarlo Mondonico), Oscar Clemencigh of Monza (presided over by Damiano Cavaglieri), and Carate Brianza (presided over by Guido Fumagalli), not to mention the Arcore Civil Protection, the Arcore highway police and the Carabinieri, the Lombardy FMI, accountant Mario Beretta of Arcore, member Pietro Terruzzi (for the kind use of the pro awards motocarro) and, last but not least Nello and Andrea Masetti, respectively son and grandson of the first world champion on Gilera, Umberto Masetti.
(Rider profile on motogp.com: www.motogp.com/it/riders/profile/Umberto+Masetti). 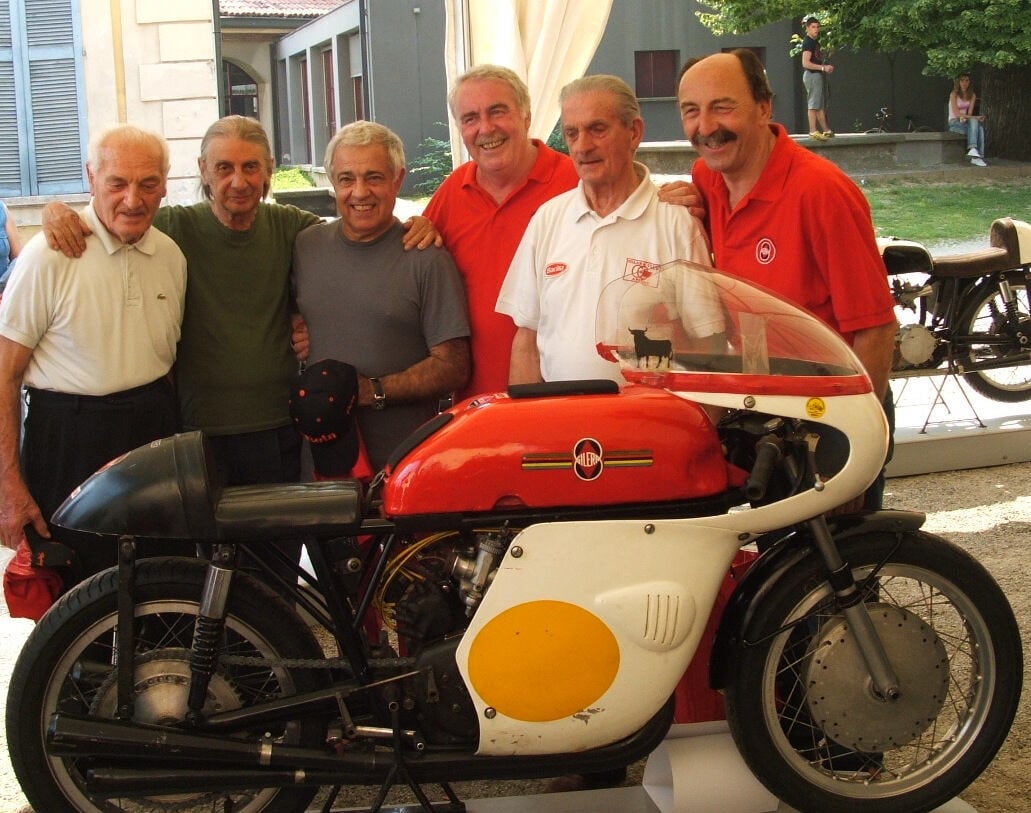 May 2005 - Among the participants of the Gilera International Meeting, some of the riders who contributed to writing its history: from left, Alfredo Milani, Francesco Guglielminetti, the Argentine Benedicto Caldarella and the world champion, Umberto Masetti. Together with them Aldo Rigamonti and Angelo Villa.

A long and warm round of applause from the large crowd accompanied the Gilera Historical Register and the Gilera Club Arcore organisers to the conclusion of this fifth edition of the international event dedicated to the Brand that they hold so dear.

SNIPPETS: THE ROSSE (THE RED MOTORBIKES) OF ARCORE IN MILAN… FOR A FICTION SHOW. The ‘Rosse di Arcore’ in piazza Duomo, in downtown Milan for the world première of Stranger Things 4, the Netflix science fiction series, attended by 7,000 fans on the evening of 26 May 2022. The Stranger Duomo experience followed for two days, on 27 and 28 May, to relive the eighties atmosphere that characterises the series. 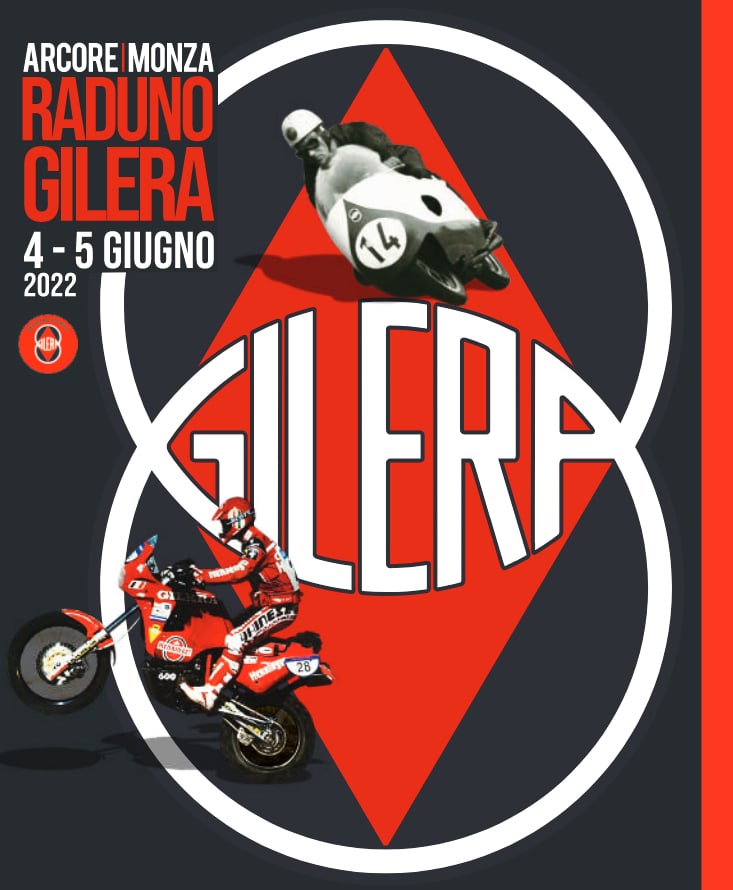