THE GREAT APRILIA CHAMPIONS TOGETHER ON THE MISANO CIRCUIT 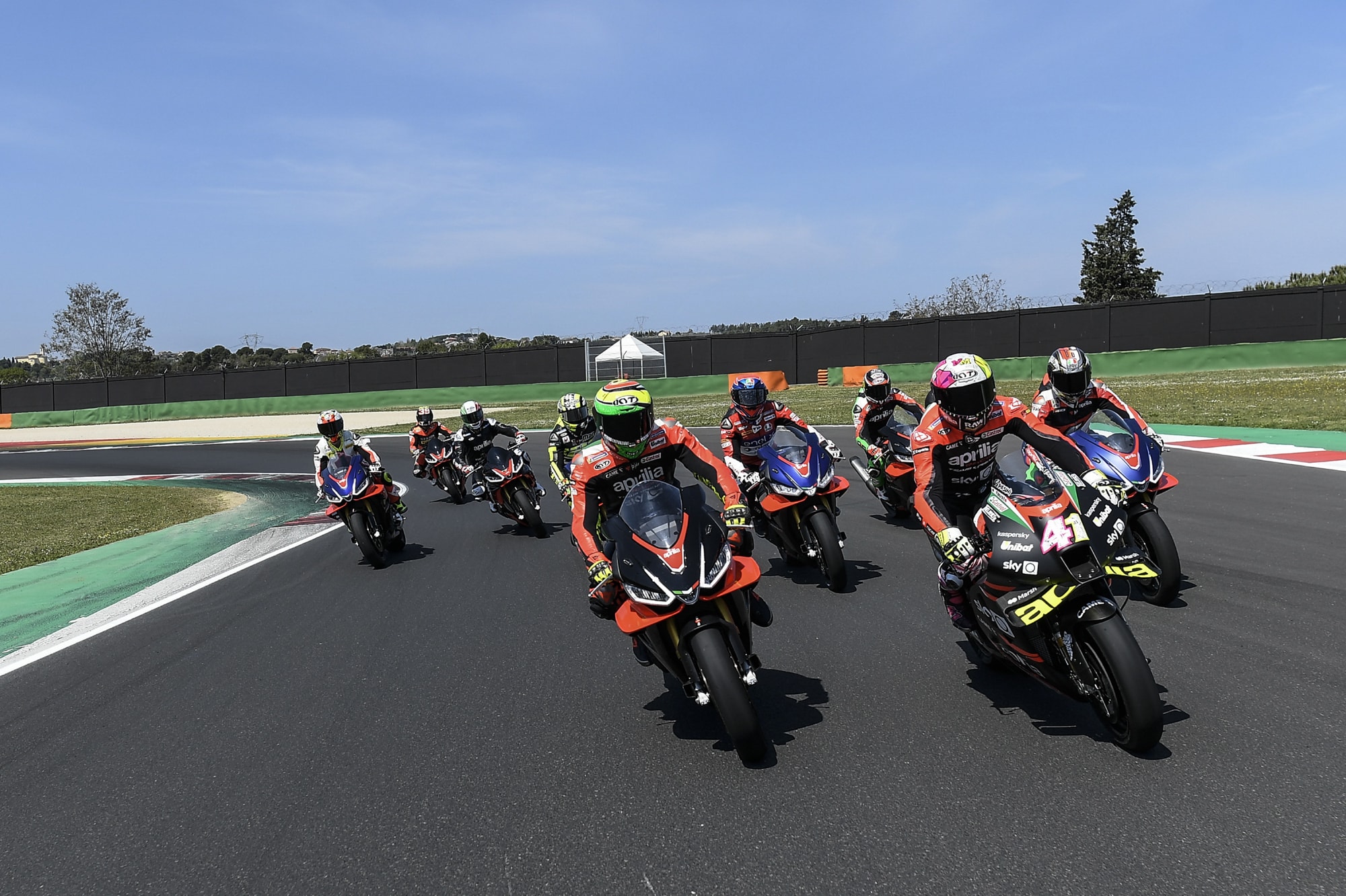 A DAY OF FRIENDSHIP AND LOVE FOR BIKES, WITH A SAVE-THE-DATE FOR ALL ENTHUSIASTS IN 2022 WHEN, AT LONG LAST WITH THE GREAT PARTICIPATION OF THE FANS, THE APRILIA ALL STARS EVENT WILL RETURN. ALEIX ESPARGARÓ AND LORENZO SAVADORI ON THE TRACK AND WITH THEM MAX BIAGGI, LORIS CAPIROSSI, ALEX GRAMIGNI, ANDREA IANNONE AND MANUEL POGGIALI. THE RS-GP BIKES FROM 2019 TO 2021 WERE PUT THROUGH THEIR PACES, ALONG WITH THE NEW RSV4 AND TUONO V4 FACTORY AND THE RS 660 TROPHY BIKES. GUEST STARRING WERE THE LEGENDARY 250 2-STROKE BIKES, ON TRACK WITH ESPARGARÓ, BIAGGI AND POGGIALI. ALL THE CONTENT, SPECTACULAR VIDEOS, INTERVIEWS AND BACKSTAGE ACTION WILL BE RELEASED ON THE APRILIA SOCIAL MEDIA CHANNELS AND WEBSITE. 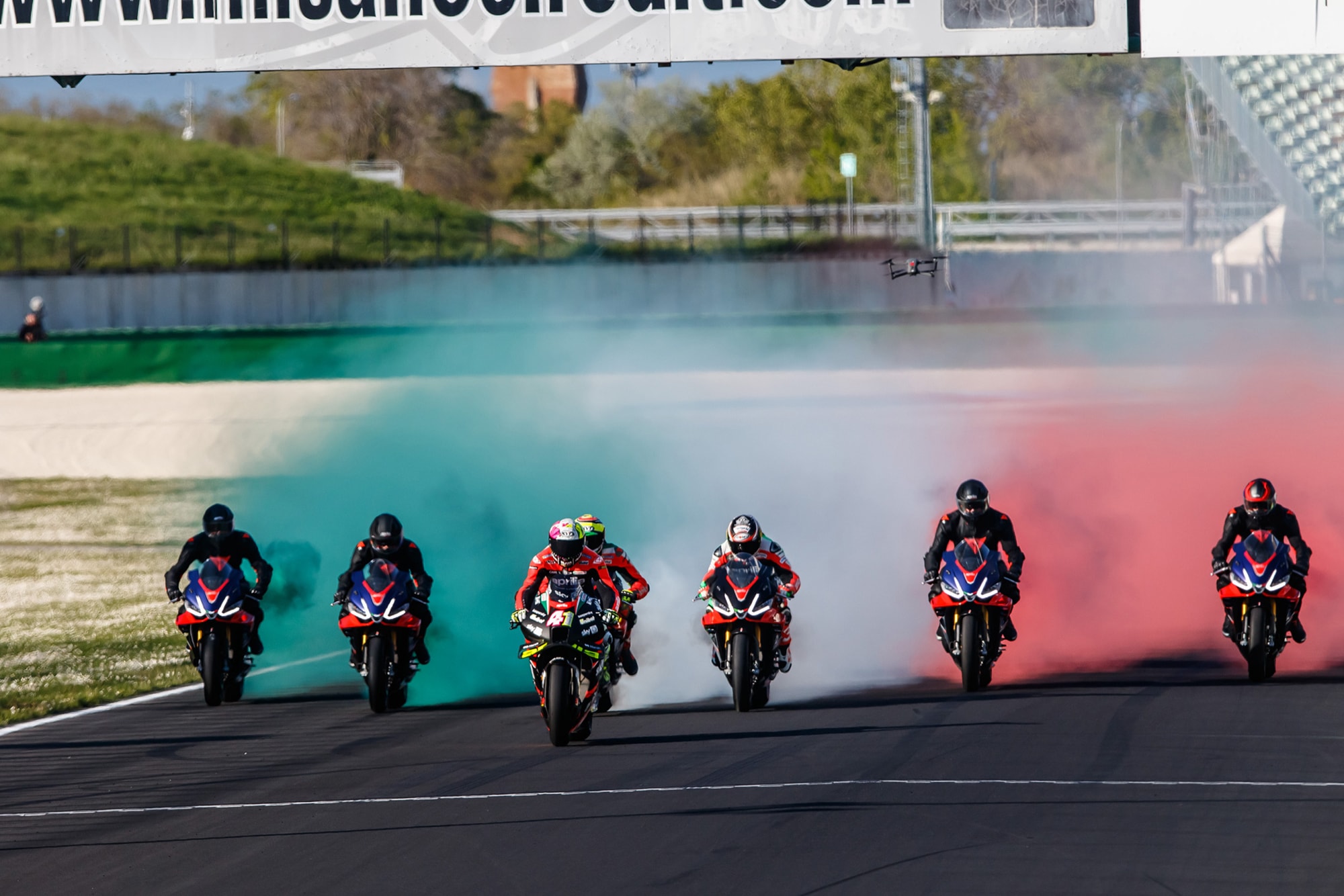 Milan, 26 April 2021 - Great champions, the MotoGP riders and young people who are just breaking into racing. There were different generations and stories together on the track with Aprilia this past Sunday at the Misano circuit. All with a love for Aprilia and its bikes in common.

The day of 25 April followed the Aprilia All Stars formula where, in the spring of two years ago, more than 10 thousand people gathered in Mugello. The health situation still prevents us from having a big event open to all, as it was in 2019, but the appointment for Aprilia and its champions is set for 2022, when we all want to get back to celebrating together. 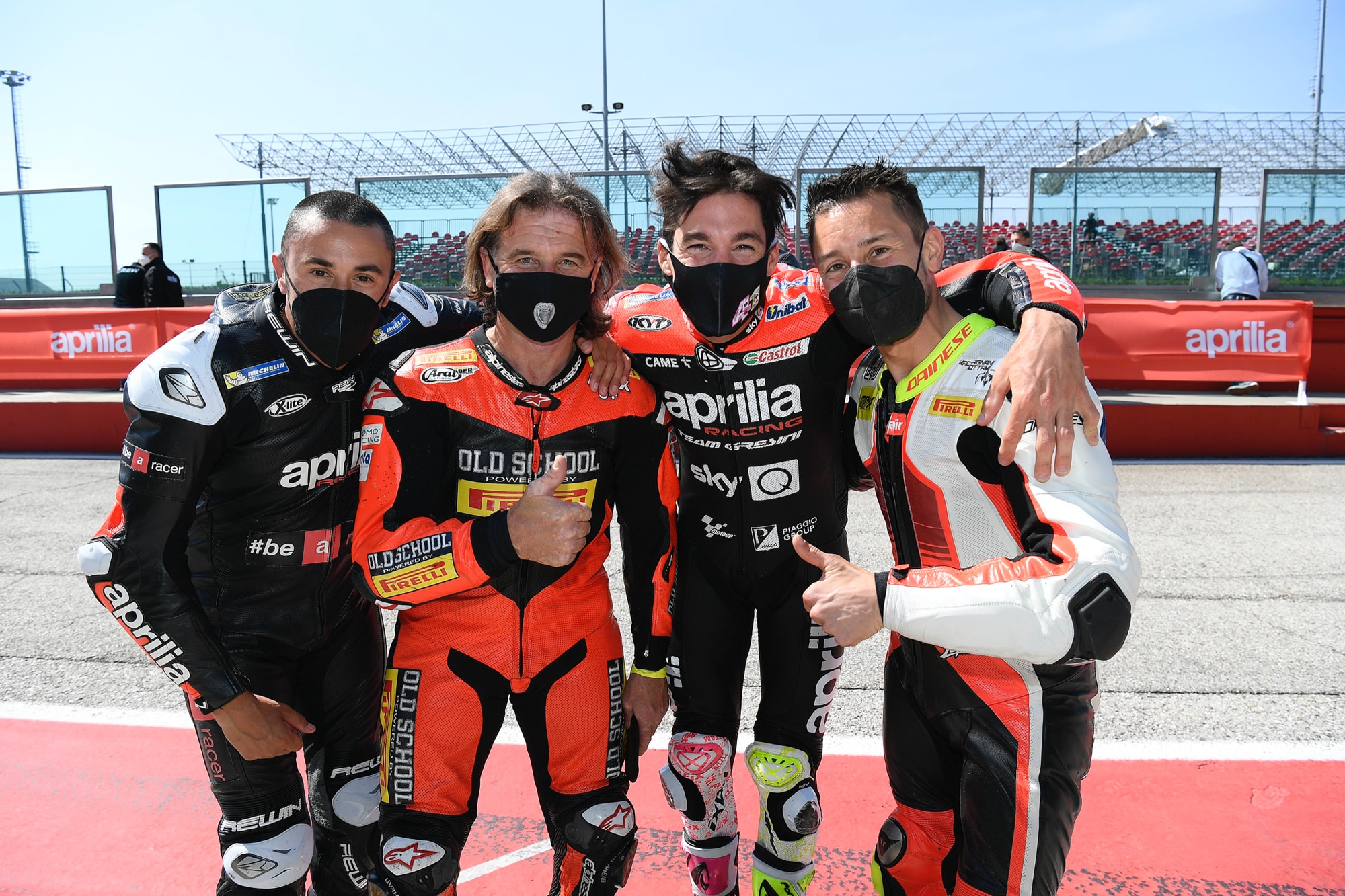 At the Romagnolo circuit, the Aprilia Racing Team Gresini MotoGP riders, Aleix Espargaró and Lorenzo Savadori, hosted lots of friends and champions, including Max Biaggi, Loris Capirossi, Andrea Iannone, Alex Gramigni and Manuel Poggiali. Along with them were also the youngsters from the Aprilia RS 660 Trophy which, as of this year, opens the doors of motorcycle racing to young riders from the age of 15. Everyone took to the track to try out the new 2021 bikes, like the RSV4 and Tuono V4 Factory, but also to have some fun with the lightweight and high-performance Aprilia RS 660 machines. 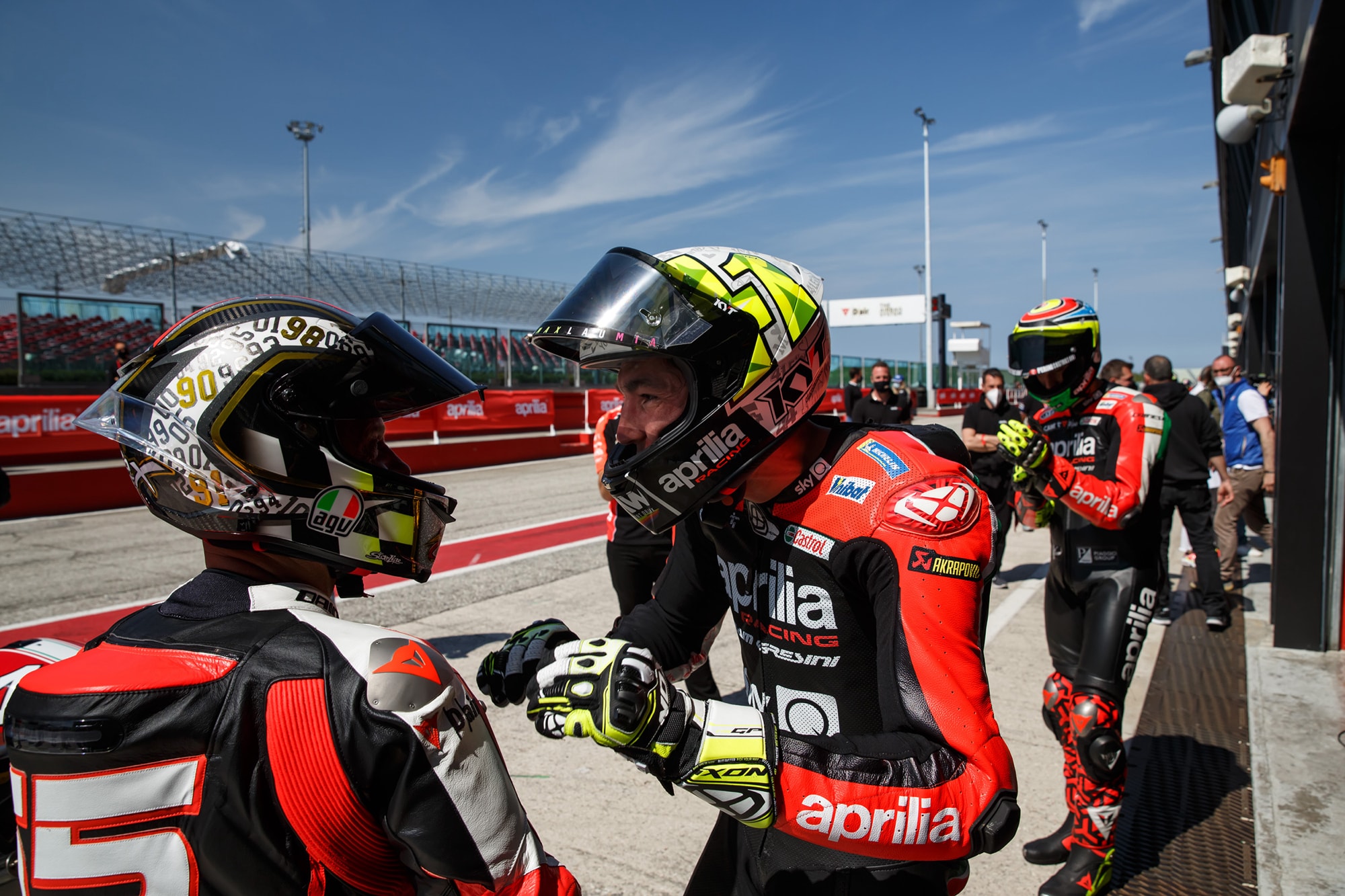 From left: Loris Capirossi and Aleix Espargaro’; Lorenzo Savadori in the background on the right.

For all the guests and friends, and for all of Aprilia Racing, the time spent remembering Fausto Gresini was an extremely emotional moment. A touching moment on the track was dedicated to the two-time world champion with all the riders lined up on the starting grid of the Romagnolo track. 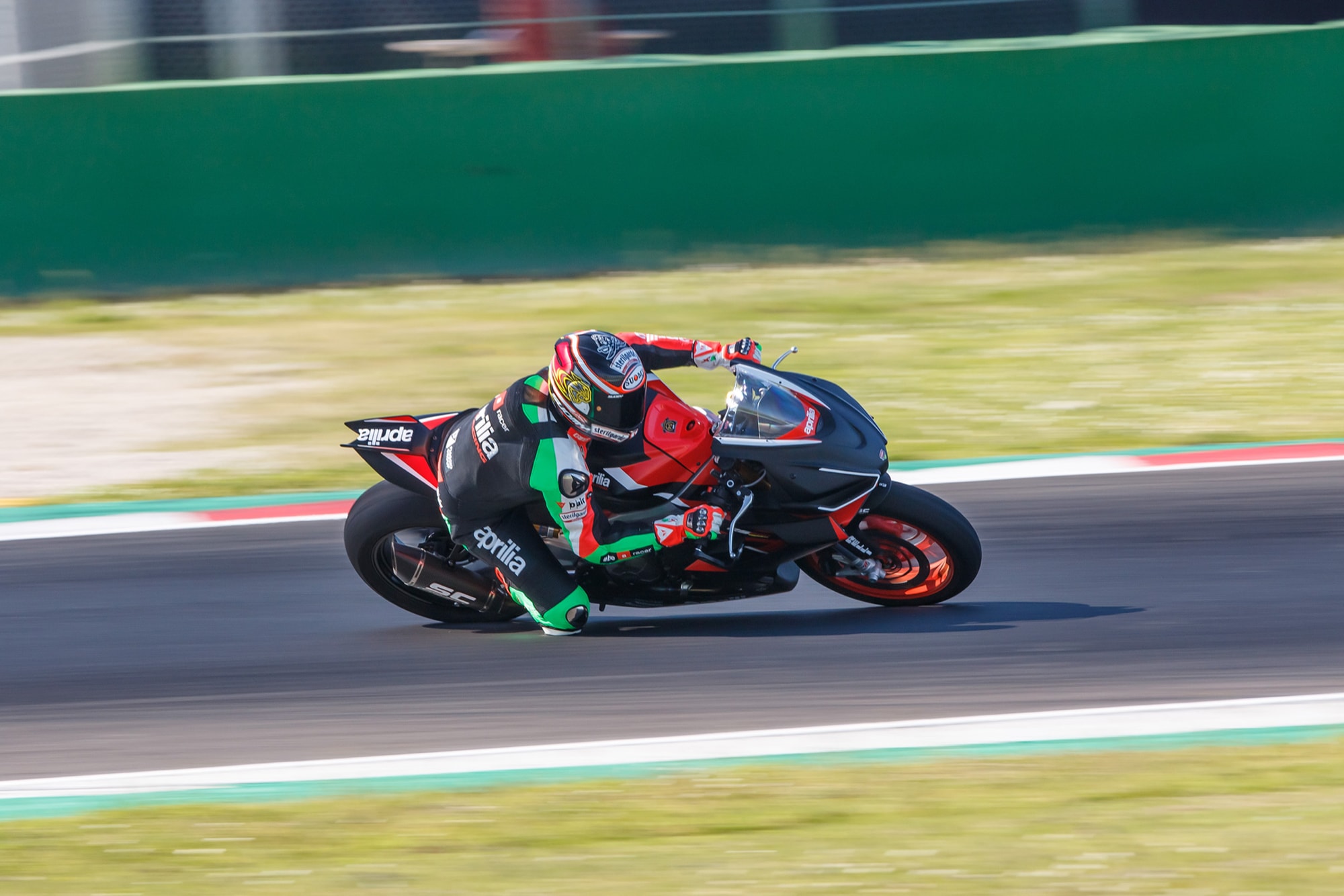 It was an intensely emotional Sunday at the circuit named after Marco Simoncelli: Max Biaggi rode his RSV4 X on the track, a special edition of the V4 that dominated WSBK with the Roman champion, as did Andrea Iannone, who also lapped on the RS 660 in Trophy version. Loris Capirossi made a “Début” on his 2019 RS-GP, the MotoGP bike that was recently added to his splendid motorcycle collection. Alex Gramigni also put the RS-GP through its paces, whereas Manuel Poggiali turned laps primarily on the RSV4. Aleix Espargaró was finally able to make a dream come true, riding again a 2-stroke Aprilia 250 GP bike on the track. Biaggi also took out the 250 he had used to win the 1996 World Championship. 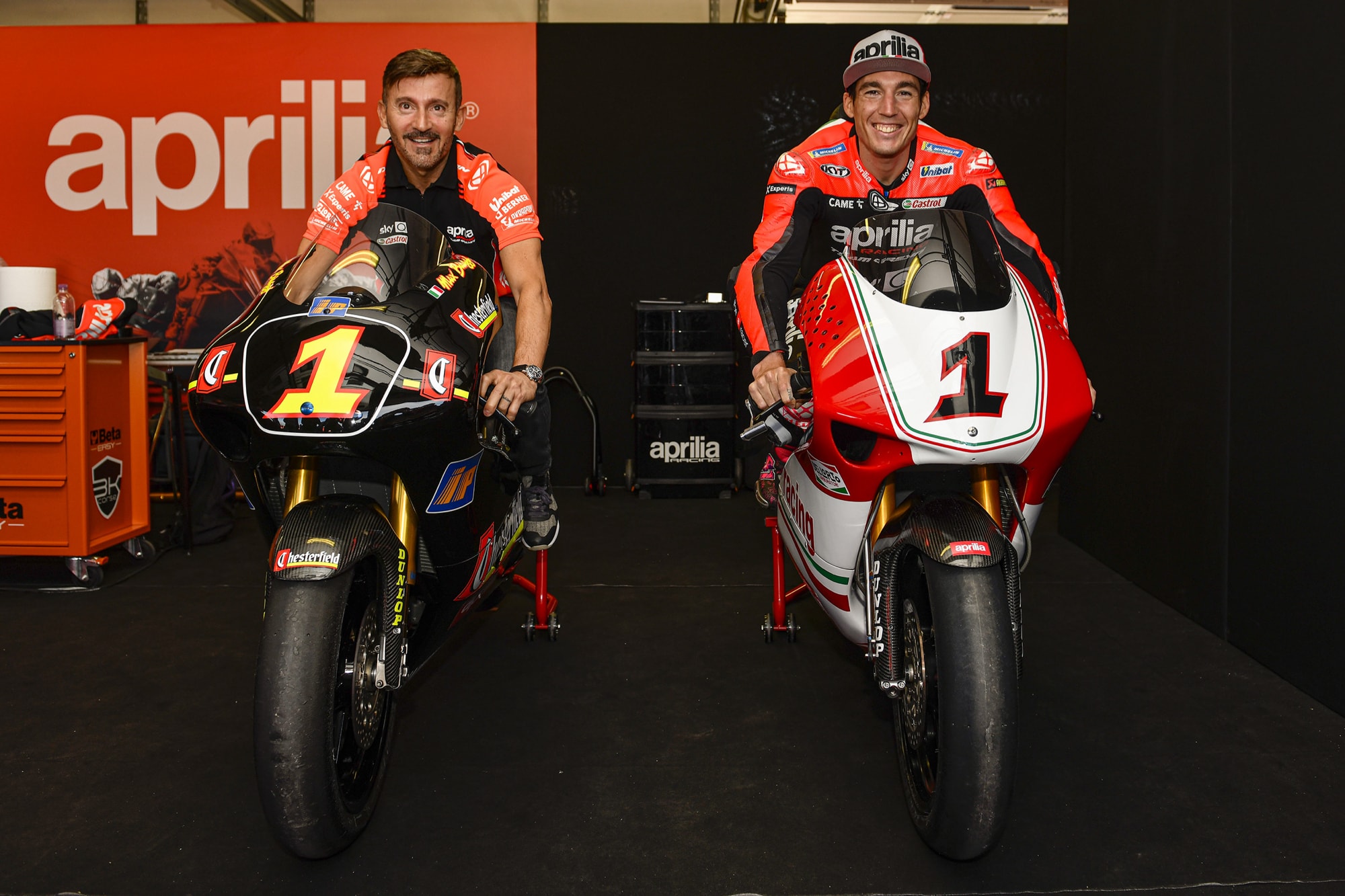 All the spectacular content of Misano, videos, interviews and backstage action will be released on the Aprilia website and social media channels. Save the date for a new edition of Aprilia All Stars in the spring of 2022, at long last open to the public. 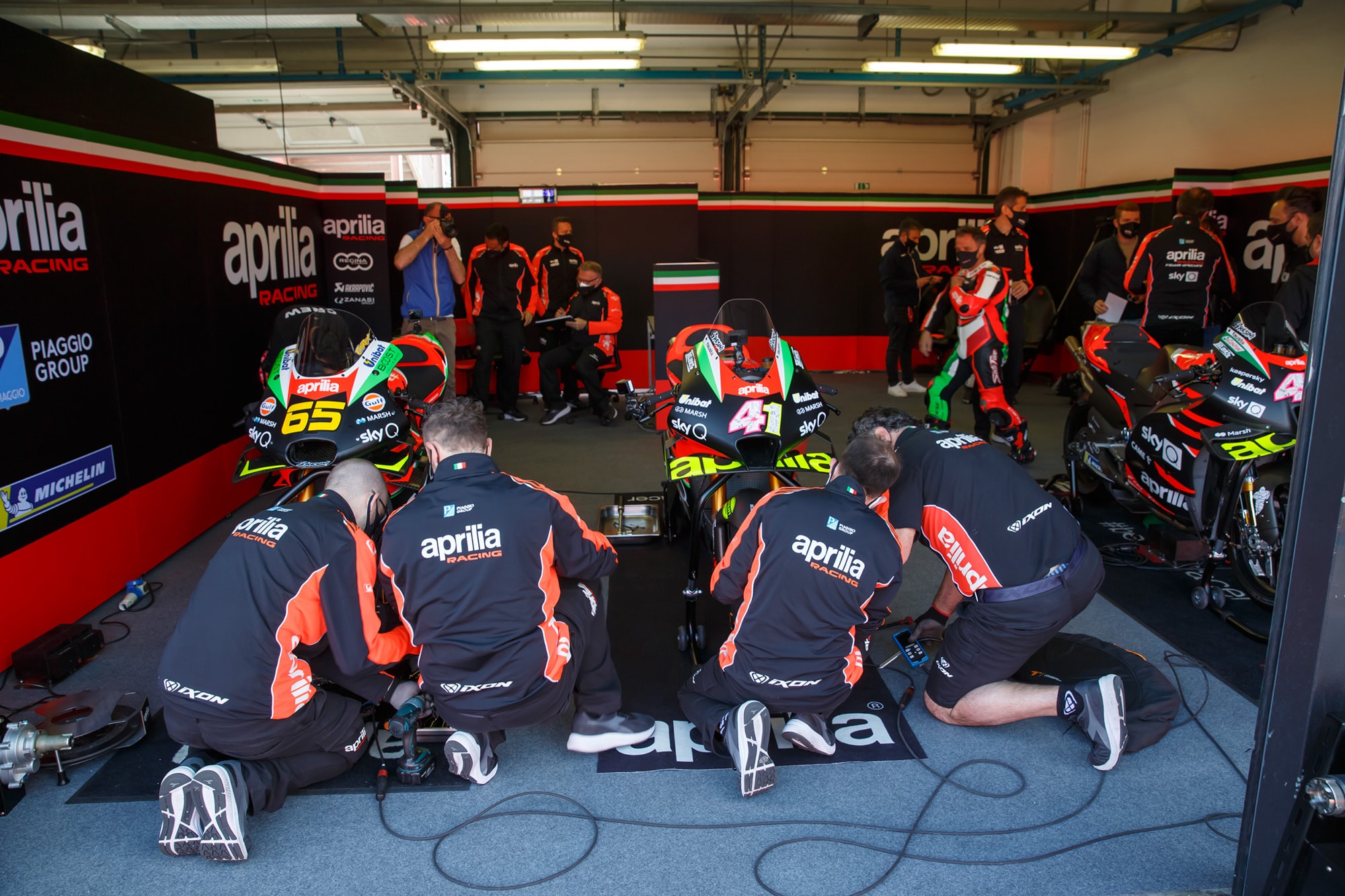