THE INTERNATIONAL RELEASE OF LUCA, THE FIRST DISNEY AND PIXAR FILM SET IN ITALY

VESPA ACCOMPANIES THE MAIN CHARACTERS IN THEIR SEARCH FOR FREEDOM. ICON OF STYLE AND ELEGANCE, WITH MAJOR APPEARANCES IN MORE THAN 1,400 FILMS, VESPA PROVES A TRUE MOVIE STAR ONCE MORE, ALSO ON THE BIG SCREEN.

Milan, 21 June 2021 – The eagerly anticipated new Disney and Pixar feature film Luca, the first to be set in Italy, had its international release this weekend and can be streamed by all Disney+ subscribers.
The fantastic setting for the characters’ adventures is the Cinque Terre area of the Italian Riviera in Liguria and the natural elements that contribute to its beauty. Another part of the cultural landscape is Vespa, the world’s best-loved and most famous scooter, a companion on the adventures of main characters Luca and Alberto to discover the world (In addition to the boys’ vintage blue Vespa, there’s a bright red one as well as a busy Piaggio Ape commercial vehicle).

Vespa has always known how to transport its fans into a carefree world bursting with colour capable of making us dream. But it has also always been synonymous with exuberance, able to “put things in motion”. That’s the same positive energy you can detect in the film, about the kind of friendship that helps us grow and ultimately develop into better versions of ourselves, and Vespa is a constant presence in the story that symbolises this positive message.
This special partnership, in which Vespa tugs at the heartstrings of children and adults alike, comes in the very year that the scooter celebrates its 75th birthday, having proved capable of becoming an international icon of Italian style. Vespa is a natural fit for its role in the film: it represents unbridled freedom for the main characters as they experience life on the surface.

“This is a deeply personal story for me, not only because it’s set on the Italian Riviera where I grew up, but because at the core of this film is a celebration of friendship. Childhood friendships often set the course of who we want to become and it is those bonds that are at the heart of our story in Luca. So in addition to the beauty and charm of the Italian seaside, our film will feature an unforgettable summer adventure that will fundamentally change Luca.”
DIRECTOR, ENRICO CASAROSA 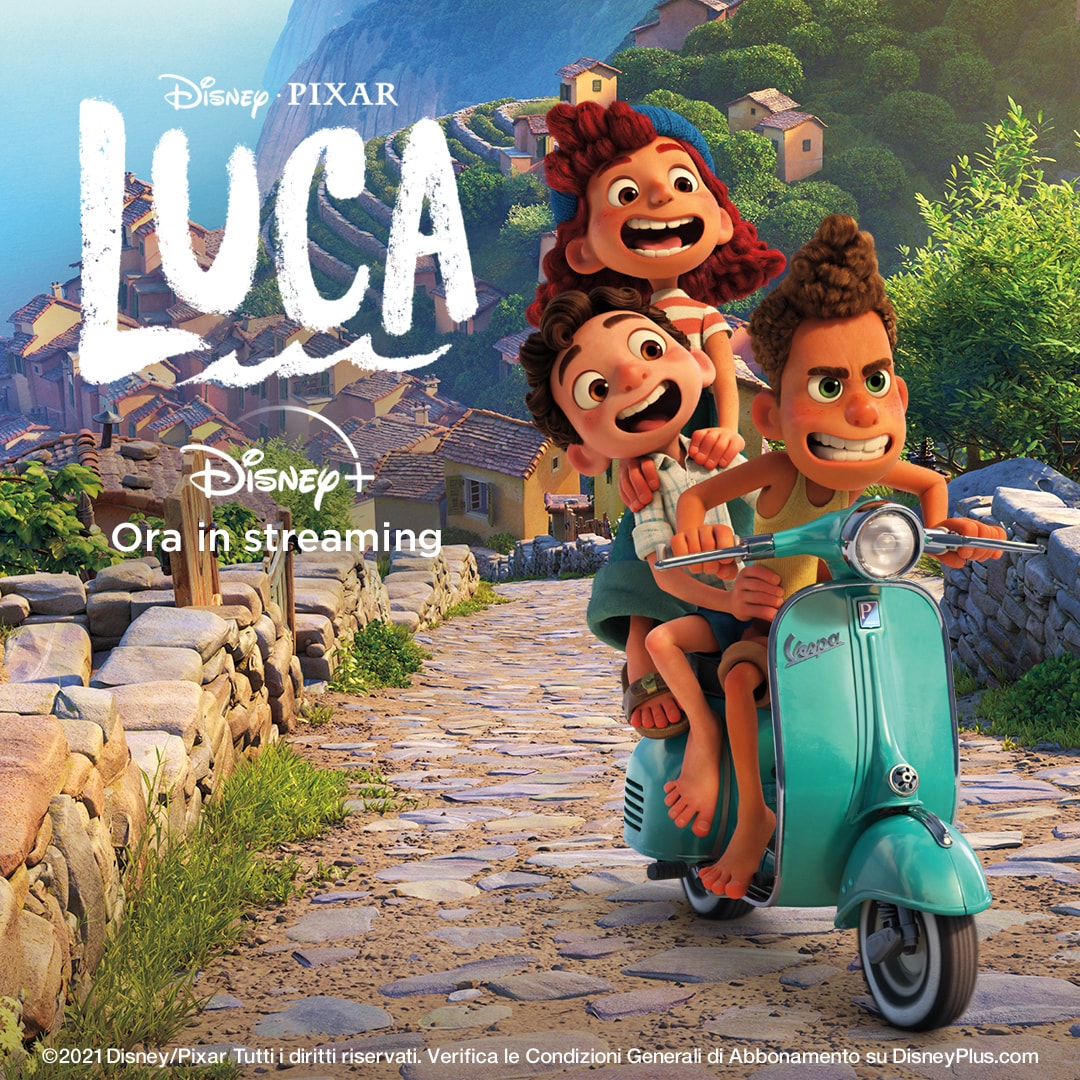 LUCA. Set in a beautiful seaside town on the Italian Riviera, the original animated feature Luca, from Pixar and Disney, is a coming-of-age story about a boy who spends an unforgettable summer packed with ice cream, pasta and endless scooter rides. Luca’s fellow adventurer is his new best friend Alberto, but there’s a deep, closely guarded secret that threatens all the fun: they’re ‘sea monsters’ from another world, found just beneath the water’s surface. Luca is directed by Academy Award® nominee Enrico Casarosa (La Luna) and produced by Andrea Warren (Lava, Cars 3).

VESPA & CINEMA: AN ETERNAL LOVE. Appearing in more than 1,400 films, Vespa has always enjoyed a special relationship with cinema, which has played a major role in establishing this legendary brand. Its first screen appearance was in the 1950 Italian film Domenica d’agosto, but Vespa was to become an internationalstatus symbol in Roman Holiday (1953) by William Wyler through the famed sequence with Audrey Hepburn and Gregory Peck taking on the Roman traffic astride a Vespa 125.

Countless actors and actresses have ridden Vespas, and no fewer films – be they comedy, drama, action or social commentary – see the scooter play a cameo, when indeed it doesn’t actually take a star turn. This includes Caro Diario (1993) by Nanni Moretti, in which the star rides a 150 Sprint for an entire episode (entitled In Vespa, in fact), Alfie (2004), in which Jude Law breezes through the streets of Manhattan on his white-blue Vespa, and The Interpreter (2005) by Sydney Pollack, with Nicole Kidman using her yellow Vespa as her preferred means of transport on the streets of New York.
That’s not to mention authentic cult films from youth culture, such as Quadrophenia, Absolute Beginners and American Graffiti, and blockbusters like The Talented Mr. Ripley, 102 Dalmatians and the more recent Transformers 5 - The Last Knight, Zoolander 2 and The Man from U.N.C.L.E. and Deadpool 2.
Vespa also features in spectacular animated films, including Ratatouille (2007), Madagascar 3 (2012) and Big Hero 6 (2014). It also made an unforgettable appearance in the eighth season of The Simpsons (1996), and many other TV series, with Romanzo Criminale and How I Met Your Mother among the most well known.
The latest reference comes courtesy of Cruella, which came out in May 2021 and is topping the box office. This new Disney film directed by Craig Gillespie stars Emma Stone and is a prequel to 101 Dalmatians. A high-adrenaline sequence sees a biker version of main character Estella astride a Vespa GS, mod-style. Here’s the official trailer (Italian version).