THE LEGO GROUP AND VESPA CELEBRATE ‘MADE IN ITALY’ EXCELLENCE WITH THE NEW VESPA 125 LEGO® SET: A STYLE ICON IN BRICK FORMAT

Milan (Italy), 25 February 2022 – When two examples of excellence meet, surprising ideas are inevitably born. On one side, the LEGO Group, which has been inspiring the builders of the future for 90 years through the power of play, and on the other, Vespa, a symbol of Italian creativity and design since 1946: together, the two famous brands introduce the LEGO® Vespa 125, the result of the ingenuity of the designers from the respective teams.

The project, dedicated to the new LEGO® Vespa 125, was conceived to celebrate the cutting-edge engineering and styling of Vespa, the most beloved two-wheeled vehicle ever, capable of creating and taking a phenomenon of culture and elegance to streets all over the world. Like the original the LEGO bricks model, which will be available from 1 March, is full of beautiful details and sophisticated design touches including a bunch of flowers in the bike’s basket and spare wheel to the removable engine cover, brick-built engine, kickstand and working steering. The colour palette that was chosen also expresses the exclusivity of the concept: the pastel pale blue pays tribute to the ’60s and the Vespa world and it is rarely used in the LEGO lines. Furthermore, this is the first time that a two-tone wheel appears in the LEGO bricks world: black for the rubber and white for the internal part of the tyre. 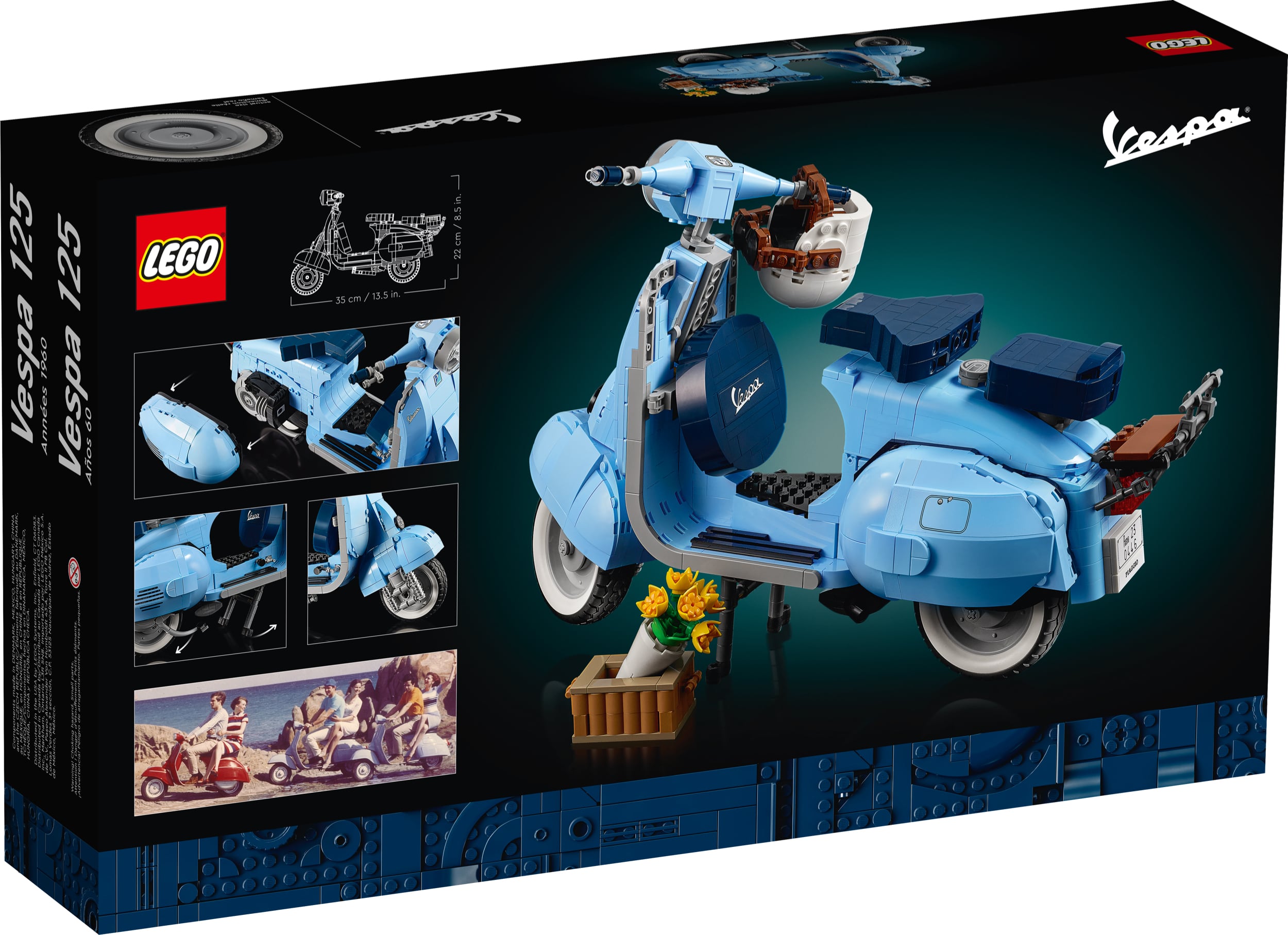 "Working with the Vespa team to create this stunning automotive masterpiece was an incredible experience! Recreating the details of the original model to celebrate the classic 1960s Vespa was one of my favourite parts of designing this set. The set offered me a chance to step back in time and let my imagination flow while designing. We hope the experience is the same for fans!” said Florian Muller, LEGO Group Senior Designer.

Marco Lambri, Head of Piaggio Group Design Center: “Working with the LEGO Group was an extraordinary experience, because it brought two dreams – the LEGO brand and Vespa – together, which have the unlimited expressive potential that they offer their fans in common. Two outstanding brands able to span different ages, always able to reinvent themselves because they have the capacity to unite and to build in their DNA. As designers, the challenge was to have the soft shapes of Vespa coexist with the form of LEGO bricks, a challenge I believe we met with flying colours.”

THE LAUNCH EVENT IN ITALY. To make the unveiling of the set even more extraordinary, the brand called on two icons of the motoring world, Guido Meda and Vera Spadini, who presented the event on 24 February, at the Piaggio Museum in Pontedera (near Pisa, Tuscany). Thanks to their expertise in the two-wheeler field, the two hosts accompanied the viewers connected to the live streaming on a stroll through the milestones that marked the history of the iconic Vespa and the LEGO Group.

PRESENTATION OF THE NEW LEGO@ VESPA 125 SET
(Piaggio Museum; available only in Italian).

It was a story that ended with the unveiling of an extremely special edition of the protagonist of the new LEGO set: surrounded by the most iconic Vespa units, a 1:1 scale model of Vespa 125, made entirely out of LEGO bricks and an exact miniature replica of the vehicle. A masterpiece of engineering made up of 110,000 pieces in 11 different colours, weighing 93.3 kg and created in 320 hours of work by a team of 4 expert builders.
Marco Capone, LEGO Italia General Manager LEGO “For us at the LEGO Group, 2022 is an extremely important year. We have been working intensely for 90 years to inspire the creativity and imagination of tomorrow’s builders all over the world. Today, we present and celebrate an icon of style and design, born more than 70 years ago out of what we could define as the highest expression of creativity... the same that we hold so dear to our heart. This is why I am happy to renew and consolidate collaboration with such an outstanding partner like Vespa with the launch of this set. We hope that more and more people will give their passions a voice and follow their aspirations to create, brick after brick, projects that will make more and more of a difference.” 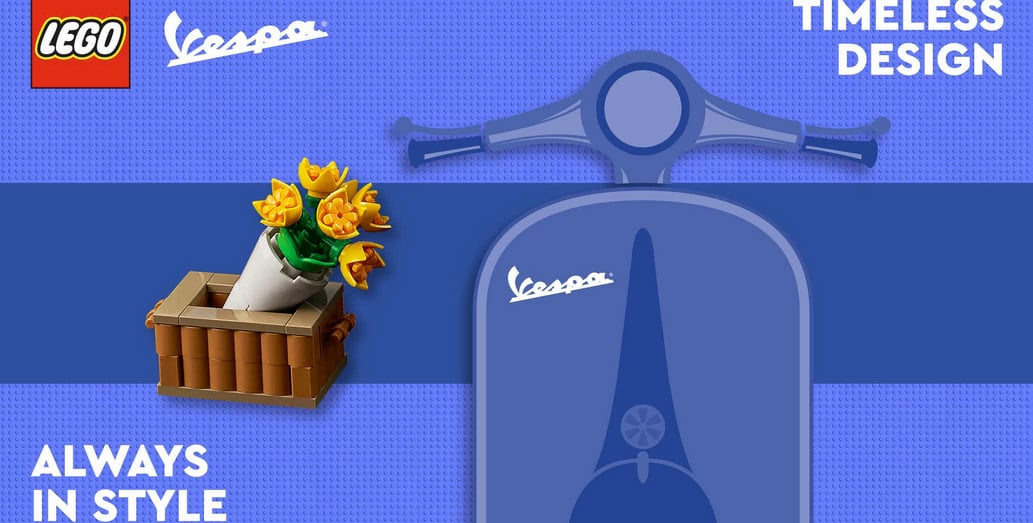 But the surprises do not end here! A twin model to the Vespa 125 LEGO in 1:1 scale, created by LEGO Certified Professional Riccardo Zangelmi, will arrive on the streets of Milan in ferment for Fashion Week. From 25 February through 3 March, curious passers-by and fans of two-wheelers and LEGO bricks will be able to immortalize a moment on the 1:1 scale Vespa in the POP UP at via Montenapoleone, already set up from 24 February for the live broadcast of the event in Pontedera on a large screen.
A coordinated project that also involves the Milan San Babila LEGO Store on Corso Monforte, which will host master builder Zangelmi for an exciting live building on 25 and 26 February (time: 11:00 AM – 7:00 PM). The artist will build a helmet (that can be worn!) and a spare tyre in 1:1 scale for original, fun, and super-cool snapshots, in keeping with the city’s modelling mood. In order to give the initiative a unique touch, from 25 February through 3 March the original Vespa 125 will also be displayed, on loan from the Piaggio Museum: a piece of extremely high historic value which inspired and continues to inspire entire generations.

From 4 March on, the 1:1 scale model, including the helmet and spare tyre, will “rev up” to begin its Italy-wide tour: first stop, the Turin LEGO Store, which will give Turinese enthusiasts the chance to admire this LEGO format masterpiece through 30 April. To discover the rest of the tour’s stops, follow us on: Local News - LEGO.com IT.
Last, but not least, two initiatives to spoil all enthusiasts: “LEGO icona su due ruote” (LEGO icon on two wheels) and “VESPA SCRATCH&WIN”.

With the “LEGO icona su due ruote”* contest, summer begins in Tuscany astride a Vespa! In fact, the winner will have the chance to take 1 romantic tour for two astride a Vespa (with Vespa 125 and another model) to discover the Maremma landscape, a guided tour of the Piaggio Museum, 2 nights for two in a 4* Hotel in Pisa with full board and many other giveaways. The first step towards taking home this amazing experience is to purchase the LEGO Vespa 125 set. To register for the initiative, simply go to

The official start of the contest is 1 March and it will be active until 14 March throughout the national territory. In any case, anyone who purchases the set from the San Babila LEGO Store and the Montenapoleone POP UP from 25 February, the date of the Milan pre-sale event, will still be able to participate in the initiative by saving their receipt. You have time to try your luck until 14 March! Complete rules are

here.
Designed exclusively for the 20 LEGO Stores, yet another special activation, “VESPA SCRATCH&WIN”**, active from 25 February at the San Babila LEGO Store and from 1 March in the other 19 LEGO Stores throughout the national territory. Until 8 March, following the purchase of the Vespa 125 LEGO set, a scratch card will be provided immediately that gives you the chance to win exclusive Piaggio memorabilia!

Furthermore, for the Vespa 125 LEGO sets picked up in the Montenapoleone POP UP from 25 February to 3 March, it will be possible to receive the “VESPA SCRATCH&WIN” card directly in the San Babila store by showing the dedicated coupon. Complete rules can be found at:

Vespa. Since 1946 entire generations dreamed of and gained their freedom astride a Vespa. After seventy-six years of history and over nineteen million scooters, Vespa is a global reference for style and technology, a legend that has surpassed its function of an easy and elegant means of commuting to become an icon of fashion and design. A global brand capable of reinventing itself without distorting its values, always staying youthful, contemporary and inimitable.
Vespa website: Sito Vespa: www.vespa.com

The LEGO Group. The LEGO Group’s mission is to inspire and develop the builders of tomorrow through the power of play. The LEGO System in Play, with its foundation in LEGO bricks, allows children and fans to build and rebuild anything they can imagine.
The LEGO Group was founded in Billund, Denmark in 1932 by Ole Kirk Kristiansen, its name derived from the two Danish words LEg GOdt, which mean “Play Well”. Today, the LEGO Group remains a family-owned company headquartered in Billund. However, its products are now sold in more than 130 countries worldwide.
For more information: www.LEGO.com