“THE MOTORCYCLE. DESIGN, ART, DESIRE”: A TRIBUTE TO THE MOTORCYCLE IN THE MAJOR EXHIBITION AT THE BRISBANE GALLERY OF MODERN ART

November 2020 – The Queensland Art Gallery (QAG) and the Gallery of Modern Art (GOMA) in Australia present the major exhibition "The Motorcycle: Design, Art, Desire" – from 28 November 2020 through 26 April 2021 (GOMA, Stanley Place, South Brisbane, Queensland).The exhibition is featuring 100 examples of the popular machine spanning more than a century of excellence and eccentricity, with a glimpse into the future with current technological innovations.

The organisers explain: “An exhibition is most compelling when it provokes greater insight into ourselves, our history and our identity, both individually and collectively. So, what has prompted QAGOMA to present an exhibition on the history and future of the motorcycle? Will an audience that finds inspiration in art be equally moved by an exhibition of machinery? Can motorcycles transcend their functional purpose to take us on an emotional or spiritual journey? The idea has appealed to gallery audiences before: in 1998, the Solomon R. Guggenheim Museum in New York presented “The Art of the Motorcycle”, impressing visitors with a form of design that embodies beauty, danger, style, power and freedom... The Guggenheim show appeared in the final moments of the twentieth century, neatly and chronologically summarising 100 years of the development of the motorcycle; QAGOMA’s exhibition uses this same history to speak to the future.”

New York. Guggenheim Museum, during the 1998 exhibition and, on the right, Vespa GS on display with a mega poster from the film “Roman Holiday” (1953) in the background. Source of images and info: www.guggenheim.org/exhibition/the-art-of-the-motorcycle

THE FIRST… 150 YEARS AGO. “We are 150 years on from the emergence of steam velocipedes — the first experiments in powered, two-wheeled transport… We are also at a pivotal moment of change between the internal combustion engine and an electrically powered future. At such a time, and with access to new and radically different technologies, designers of motorcycles can challenge conventions, discard the baggage associated with outmoded technology and break old rules. The potential of this moment is best understood when the story is told from the beginning.

In the late 1860s, French inventor Louis‑Guillaume Perreaux married a small steam engine to a Michaux bicycle to create the earliest motorised two-wheeled transport. The two-wheeled race to the future had begun, but, for Perreaux, that race was over before he had left the blocks: the principles of the internal combustion engine had already been envisaged with the first working engine firing up in Cologne in 1876. By 1894, Hildebrand & Wolfmüller in Munich began producing petroleum engine-driven motorcycles commercially, with around 2,000 manufactured before the end of the century.”

VESPA, THE INGENIOUS INVENTION THAT BECAME THE MOST FAMOUS SCOOTER IN THE WORLD. “When Corradino D'Ascanio designed the Vespa for Enrico Piaggio in 1945, he was charged with designing a vehicle that could be ridden by women and men, including priests in their Roman cassocks. D’Ascanio wanted to put Italy on two wheels, but not on motorcycles as Italians knew them. His new vehicle had to be reliable, comfortable, compact, economical, and easy for everyone to ride, no matter the attire. The resulting creation also happened to be elegant, streamlined and iconic. Its pressed-steel monocoque chassis and detachable side panels concealed engine, fuel tank and cables. The step-through frame accommodated all manner of clothing, while leg shields offered protection from road debris and the weather. This beautiful object of design combined commercial and aesthetic agendas so perfectly that it would become one of the most popular and romanticised forms of transport in the twentieth century.” And it still is… 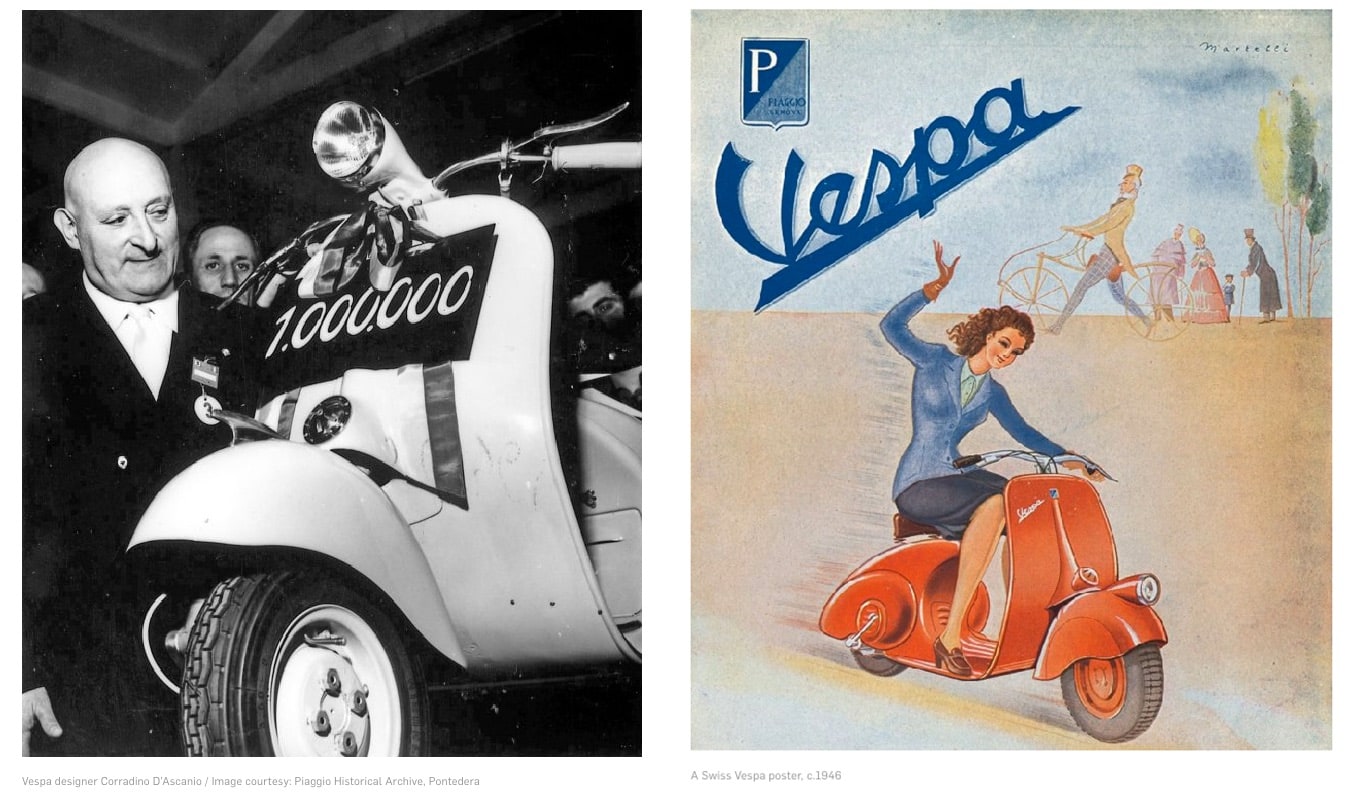 From the left: Corradino d’Ascanio and the one-millionth Vespa produced in the Piaggio plant in Pontedera (Tuscany). On the right, advertisement poster (Switzerland, around 1946) 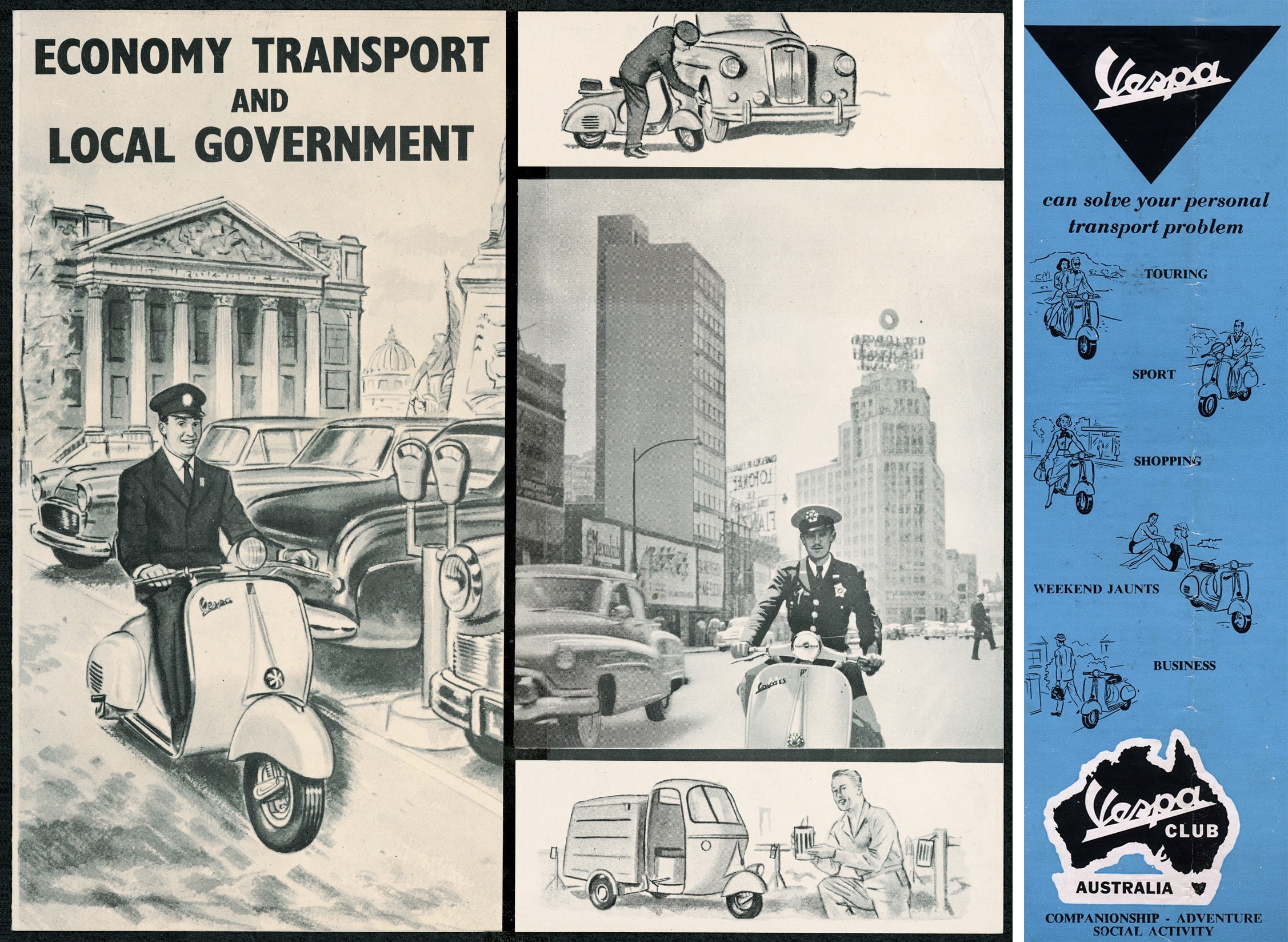 Advertising leaflet in Australia (1955-56) and, on the right, a vintage Vespa Club Australia poster. 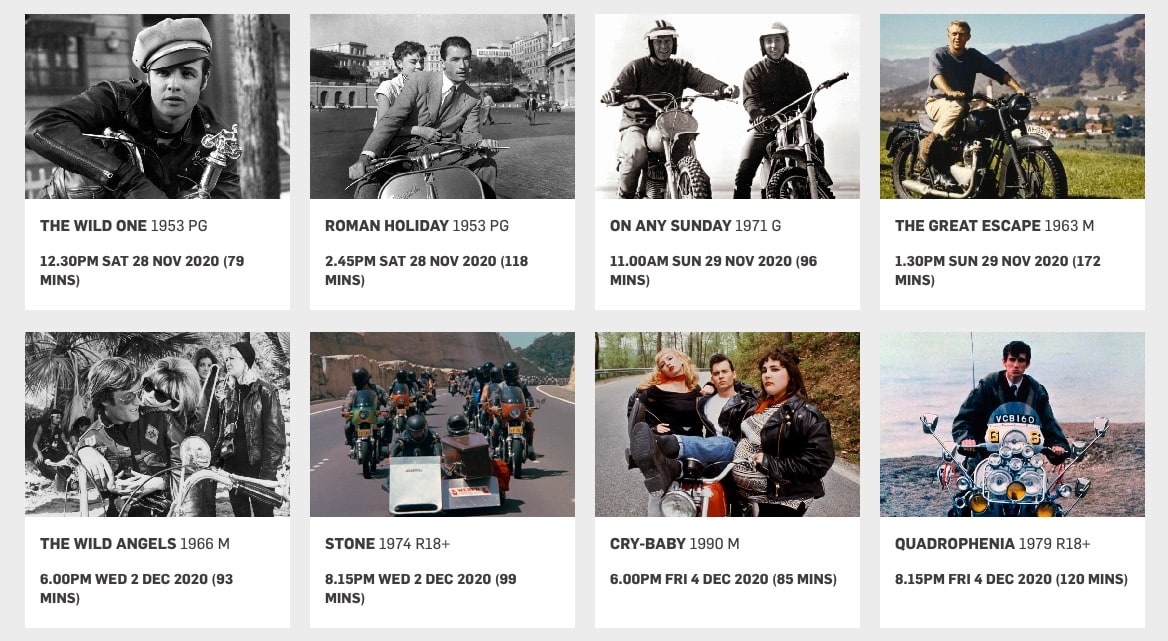 COLLATERAL EVENTS. In the full programme of collateral events and reviews, the “Motorcycles on screen” cycle stands out, dedicated to films featuring motorcycles and scooters, such as “Vacanze Romane” (Roman Holiday, 1953) and “Quadrophenia” (1979), with a Vespa super star.

MOTO GUZZI ALSO IN THE EXHIBITION CATALOGUE. The renowned brand of global motorcycling, the Eagle brand (1921-2021) is approaching its 100th birthday. 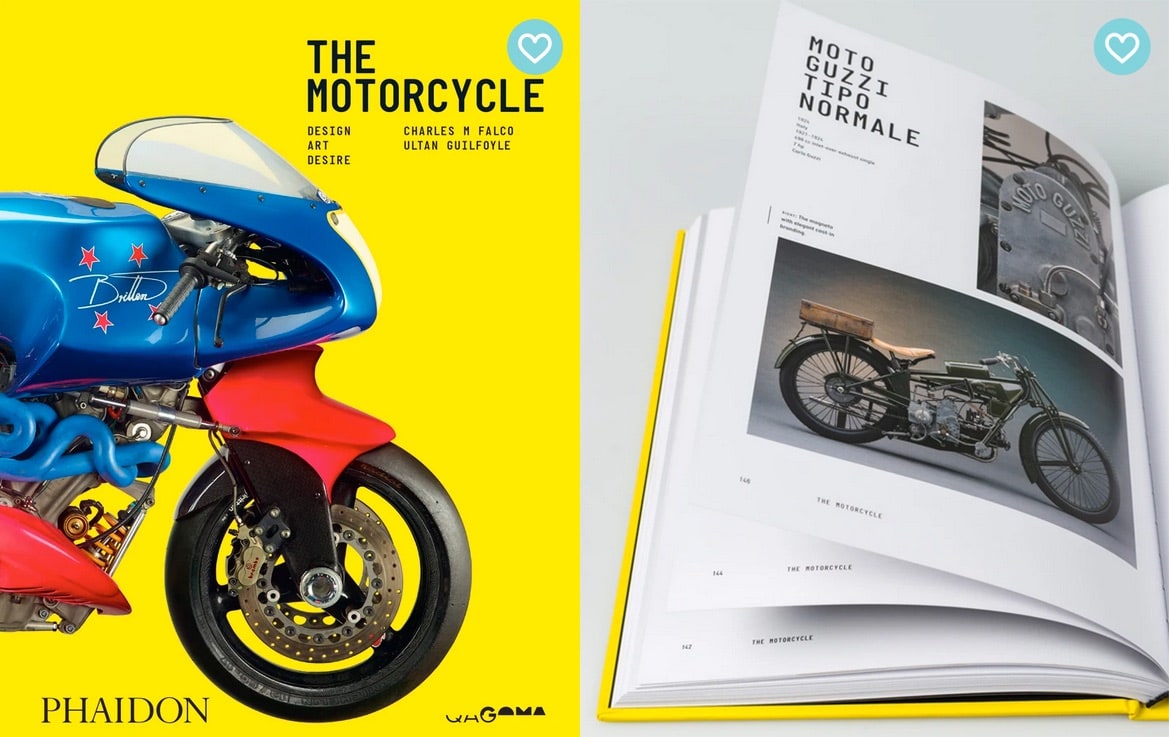 Source of images and info:
qagoma.store/products/the-motorcycle-design-art-desire 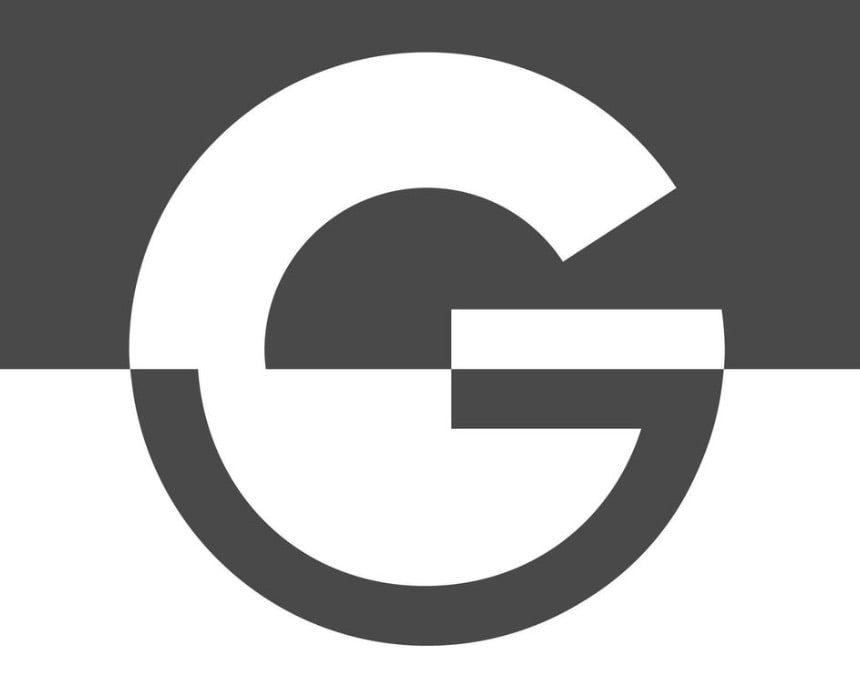