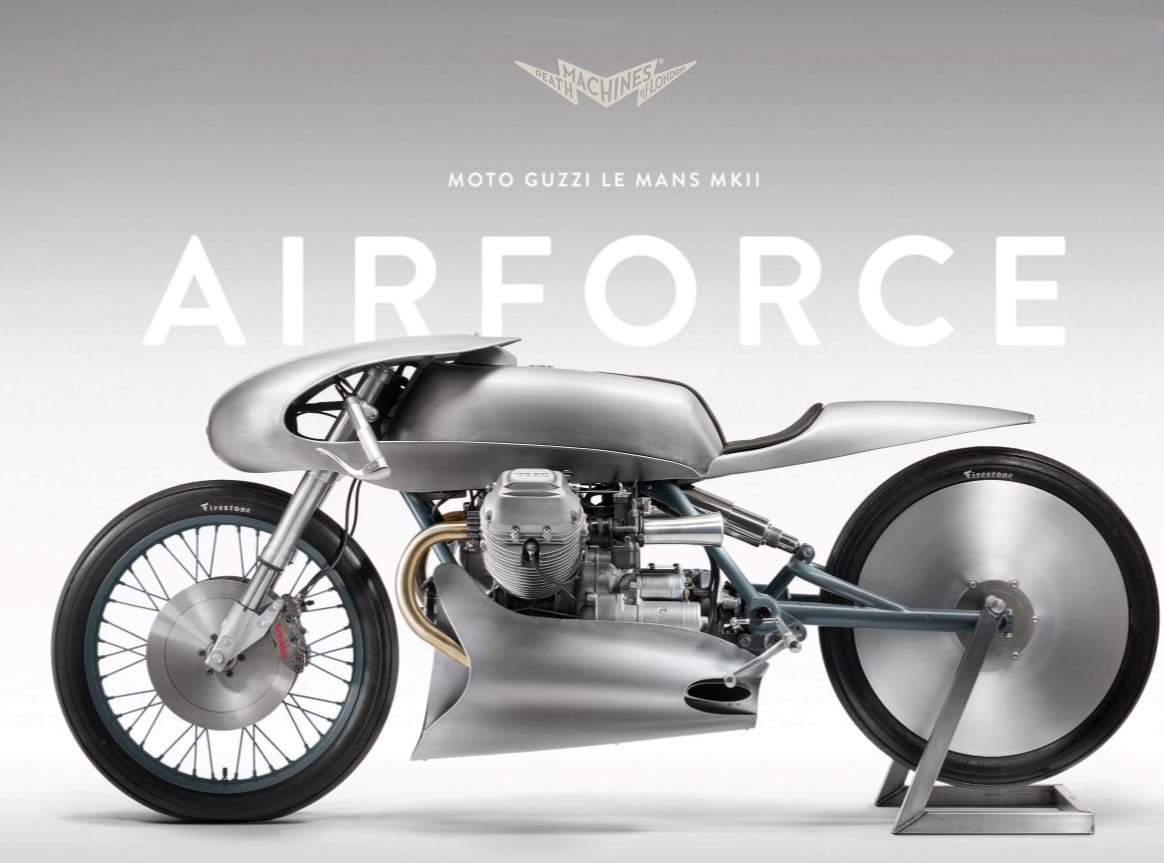 PRODUCED ON THE 130TH ANNIVERSARY OF THE BIRTH OF THE PILOT, A KEY FIGURE IN THE HISTORY OF THE MANDELLO EAGLE, A UNIQUE WORK BASED ON A MOTO GUZZI LE MANS MK II. PHOTOS AND VIDEO HERE.

From the skilled hands of Death Machines of London comes Airforce, a custom job on a 1982 Moto Guzzi Le Mans MK II base and an admirable combination of design and celebration: on the 130th anniversary of the birth of Giovanni Ravelli – (Brescia, Italy, 14 January 1887) a motorcyclist and squadron mate of Giorgio Parodi during the First World War and the inspiration for Parodi and Carlo Guzzi in founding what would later become the Moto Guzzi company – the creation of the British workshop takes its cue from the aviation world of which Ravelli was an Italian wartime hero.

Built in 112 days and shown at “Bike Shed 2017”, an independent motorcycle show held at London’s Tobacco Dock at the end of May, Airforce is an elegant and prestigious project offering solutions that draw their inspiration from the skies: from the tyres reminiscent of period aeroplane tyres, to the lenticular rear wheel and the swingarm inspired by the world of aircraft, all the way to the use of hand-beaten aluminium and aerodynamics designed for top performance, the bike is a tribute to the experience of the Italian pilot, who was killed in action on 11 August 1919, and to his influence on his fellow adventurers, which led to the foundation of the motorcycle company in Mandello.

In 1921, Parodi and Guzzi established the "Società Anonima Moto Guzzi", choosing an eagle (the symbol of the Italian Naval Airforce and Royal Navy at the time) as their logo, in memory of their late friend.

AIRTAIL: ANOTHER CREATION FROM DEATH MACHINES OF LONDON, ON A 1981 MOTO GUZZI LEMANS MK2 BASE.

SEE ALSO:
THE FOUNDERS OF MOTO GUZZI. THE FLIGHT ENGINEER, THE AVIATOR, THE SHIPOWNER AND… THE SPREAD-WINGED EAGLE
wide.piaggiogroup.com/en/articles/people/the-founders-of-moto-guzzi/index.html