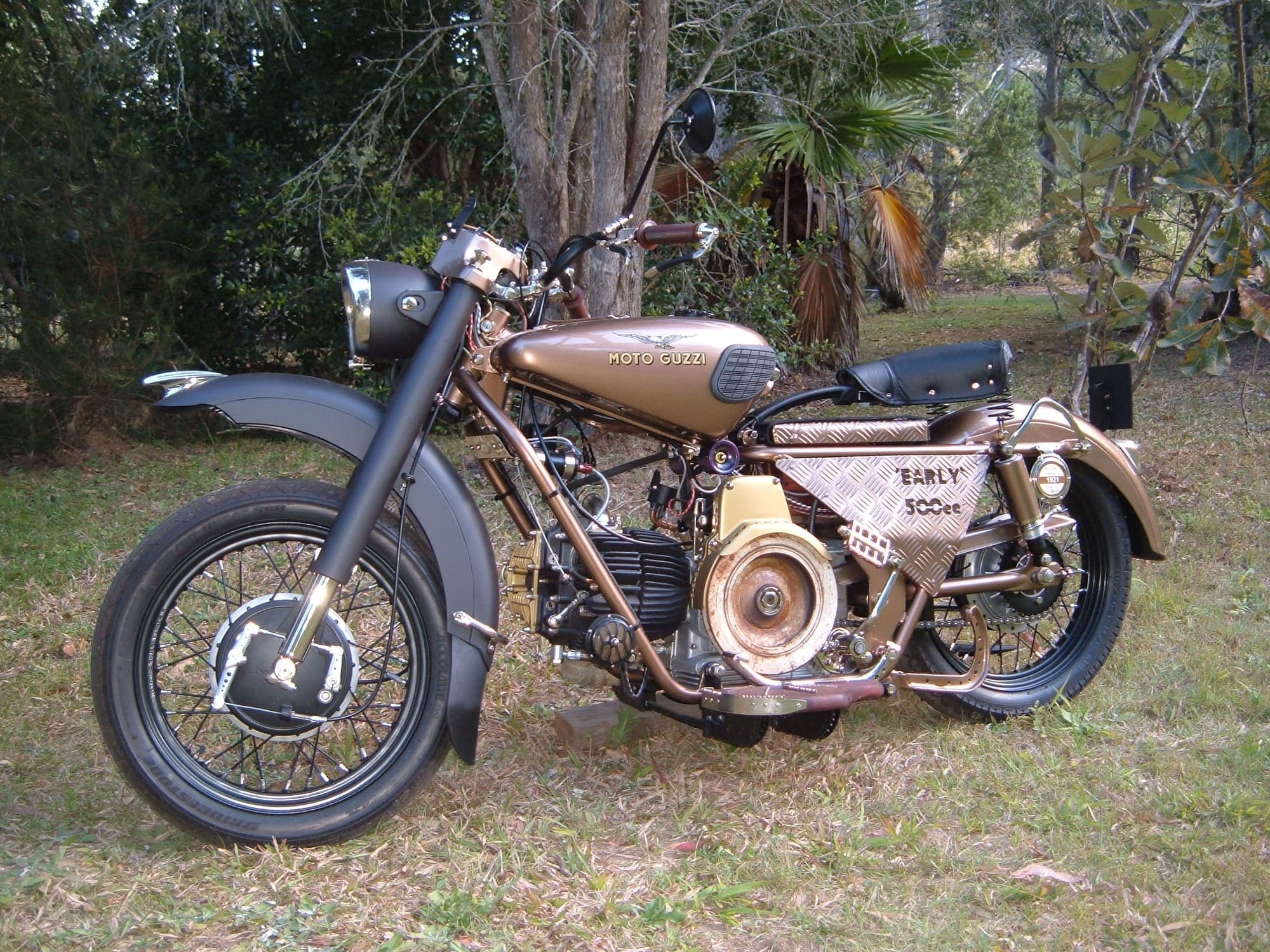 A FANATIC OF THE EAGLE BRAND AND THE VESPA. HE HAS TRANSFORMED A NUOVO FALCONE 500 INTO A SCULPTURE ON TWO-WHEELS, NAMED “RODRAT”. 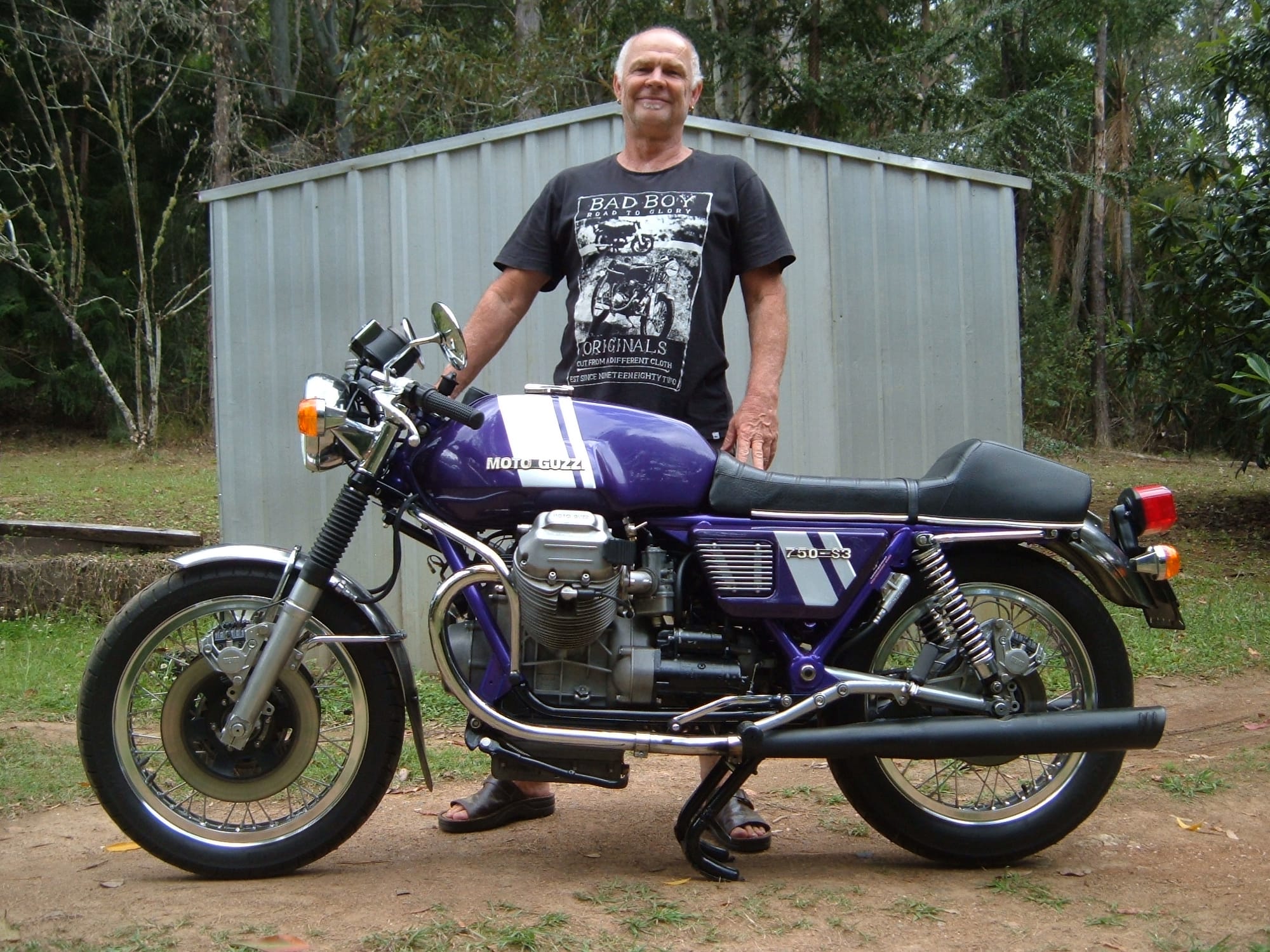 VIDEO BY CLIFF DREVERMANN, EVEN AUTHOR AND COMPOSER OF THE SOUNDTRACK.

October 2018 – Cliff Drevermann is 56 and lives on the Sunshine Coast in Queensland, Australia. A devotee of Italian Moto Guzzi bikes, he is an original and highly regarded customiser – Moto Resykld is his build name – but also an artist, musician and composer. He restores vintage bikes by hand, piece by piece, some of which, such as the “Rod Rat”, based on a 1974 Moto Guzzi Falcone 500, he has re-interpreted and transformed into sculptures on two wheels. With meticulous attention to detail. This is truly an exhibition-worthy motorcycle! 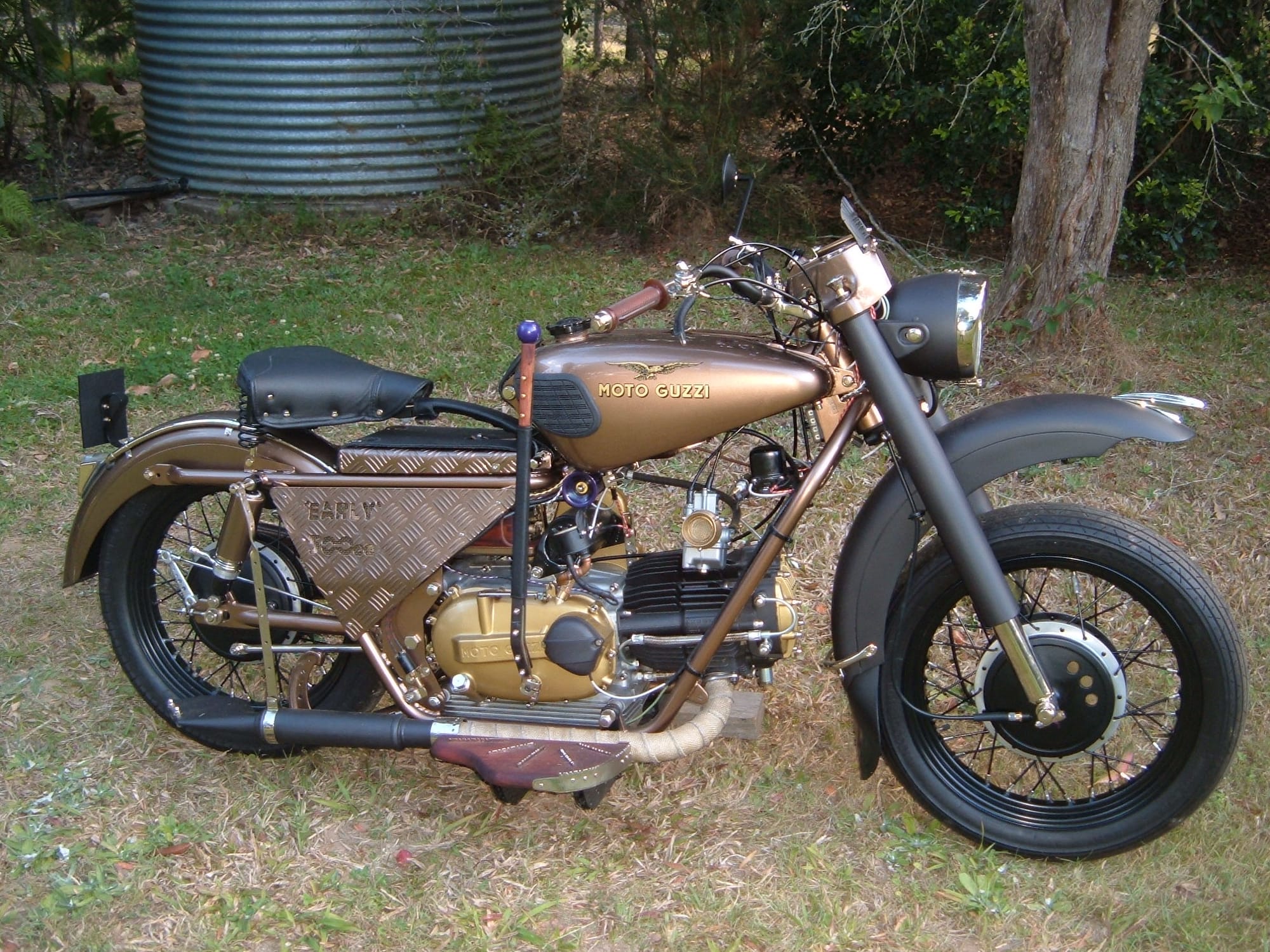 “Rod Rat” by Cliff Drevermann, Moto_Resykld, based on a Nuovo Falcone 500, packed with accurate details that echo the origins of Moto Guzzi.

Here is the article he sent to Wide magazine, about his MG “Rod Rat” creation.
Article by Cliff Drevermann: “My customised bike Rod Rat started life as a 1974 Moto Guzzi Nuovo Falcone 500cc motorcycle, and was one of twenty imported privately into Australia and offered for sale. It had previously been in service with the Serbian Army and came to me painted entirely in black for night operations, with 11,000 km on the clock. 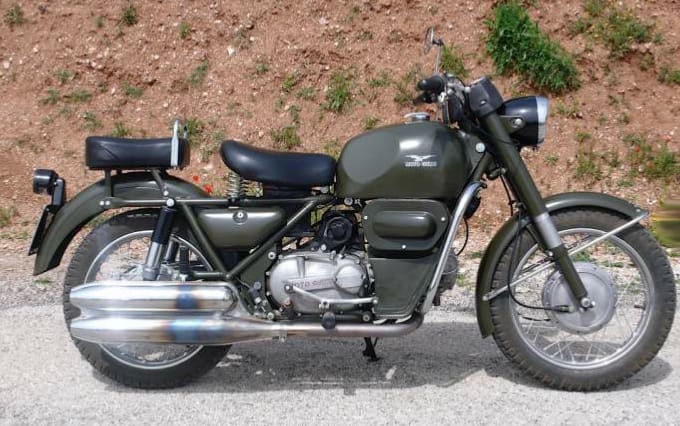 With its massive external flywheel and motor configuration dating back to the earliest of Guzzis, I could see the potential for creating a retro-modified machine from the Falcone.

I was inspired to build the bike after a successful restoration of my 1975 Moto Guzzi 750 S3, which I have owned for some years now, and as an artist with a background in making sculptural pieces from junk I wanted to do something different. The fuel tank is from the three-wheeled Ercole model and I have used a genuine Fender leather guitar strap and buckle for the tank strap. The front mudguard is made from a second rear NF mudguard and both wheel rims are in fact 18" front rims from the V7 Racer. 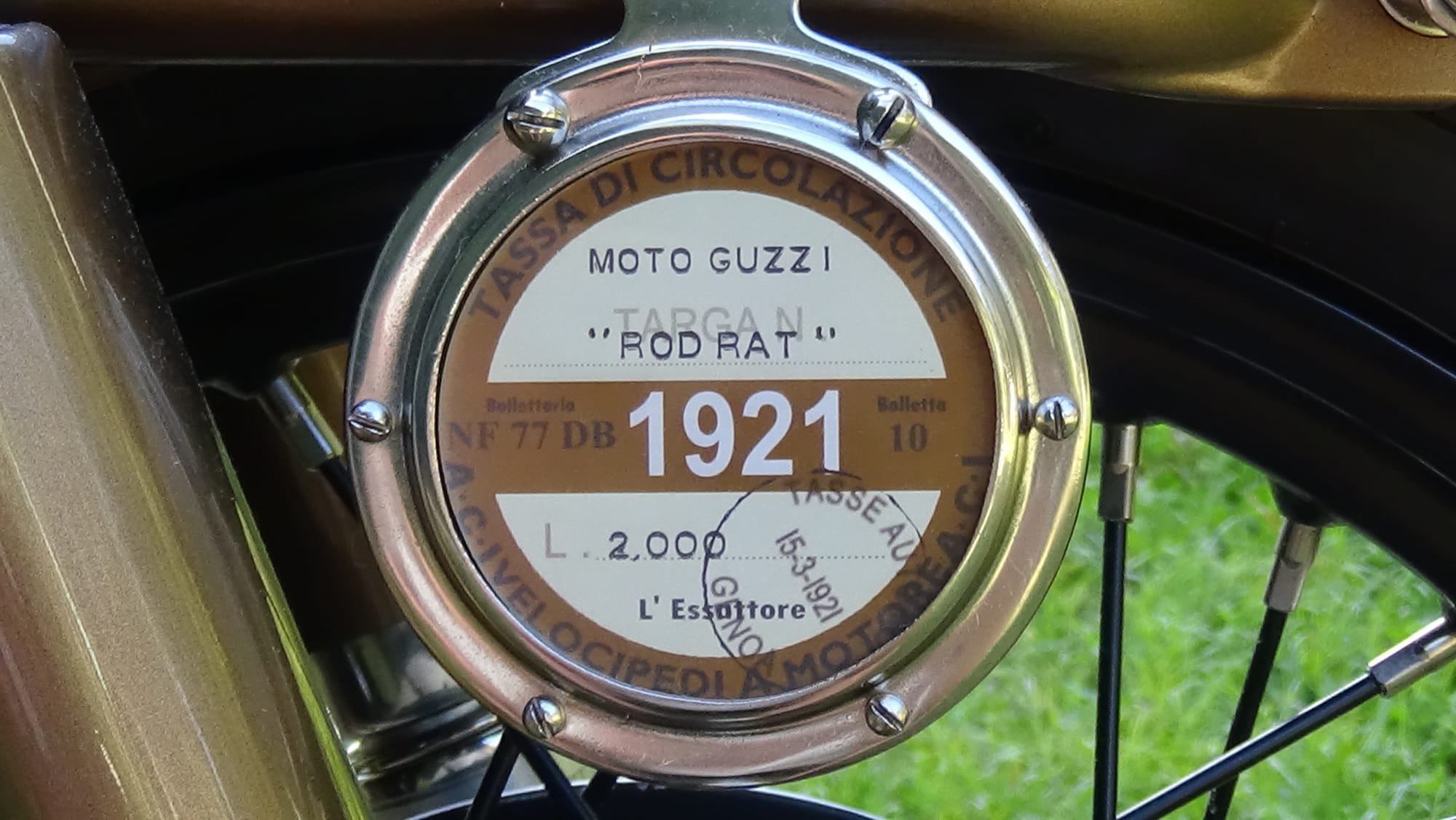 Ten years ago, in 2008 I travelled 4,000 km around Italy on a 150cc Vespa and developed a fondness for these legendary machines, and so I have used a mascot from a 1958 model at the front. The custom printed and stamped details of the bespoke replica Italian tax disc tell the story of the very beginnings of the Moto Guzzi name back in 1921 with the formation of the "Societa Anonima Moto Guzzi"; it also shows the initial amount of 2,000 Italian lira the Genoese shipowner Emanuele Parodi gave his son Giorgio in 1919, to help get the venture underway – a success that has been going for 97 years! 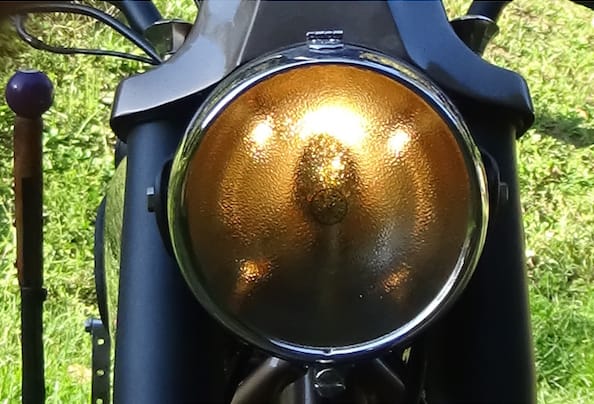 The lighting circuit is triggered by a 12v PIR motion sensor mounted under the seat. When someone walks by the bike it activates the headlight, taillight, gauge lights and the purple LED strip lighting concealed under the tank for a period of twenty seconds. In line with my work as an artist the headlight reflector is made from a solid silver antique bowl; combined with a replica Lucas Difusa frosted lens and dimmed 3W LED lamp bulb, it produces the effect of an early gas lamp. CV 26.2 on the laser-cut vinyl number-plate is the maximum horsepower figure as quoted in the Italian workshop manual for the Nuovo Falcone. Viva la Moto Guzzi!”. 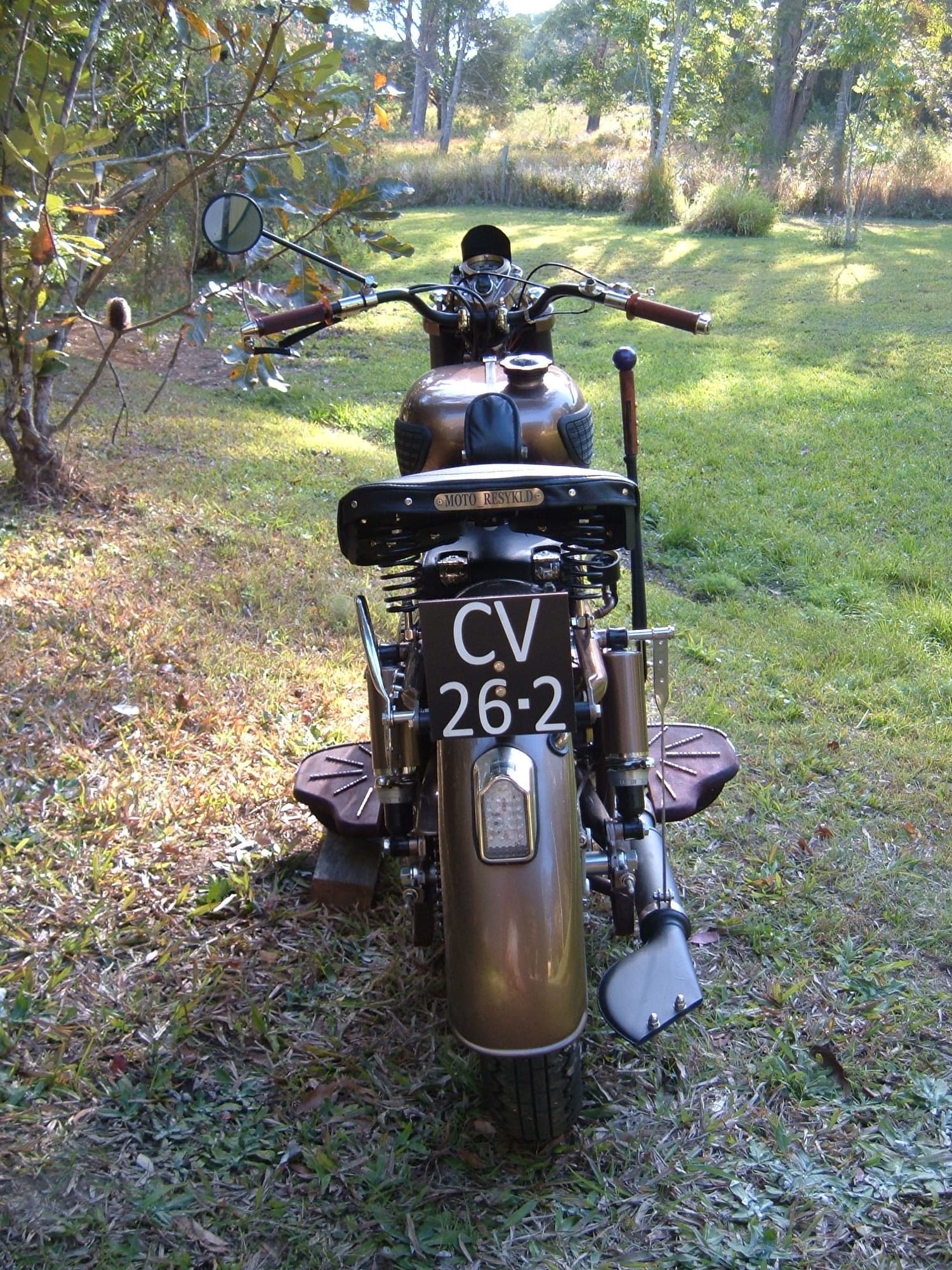 Adds Cliff: “I hope many people are inspired by the Falcone: the bike is the result of three years of work; it is the first custom bike in the world to use skateboard wheels as supports for the fuel tank. I would like that my work exhibited at the Piaggio Museum in Pontedera, in Italy. It would be a dream of mine to have my work shown internationally because truly my thing is for many people to enjoy my work and be inspired to step outside the box.”
And he concludes: “When I toured on the Vespa in 2008 I rode as far south as Naples (I spent the day walking around the backstreets and taking many photographs of scooters), before needing to return the bike to Milano and catch the plane. I covered about 4000klms in three weeks. I would love to travel more and perhaps I will be lucky enough one day to travel down through Italy and Spain and over to Morrocco.”
Good Luck, Cliff: we wish that your dream would come true!