THE PIAGGIO THREE-WHEELER IS USED TO SUPPORT ORGANISATIONS AND ASSOCIATIONS THAT HELP THE NEEDY, INCLUDING THE CITY ORPHANAGE. ITALIAN AMBASSADOR FABRIZIO LOBASSO: “AN EXPERIMENT IN SOLIDARITY-BASED INTERCULTURAL DIPLOMACY.” 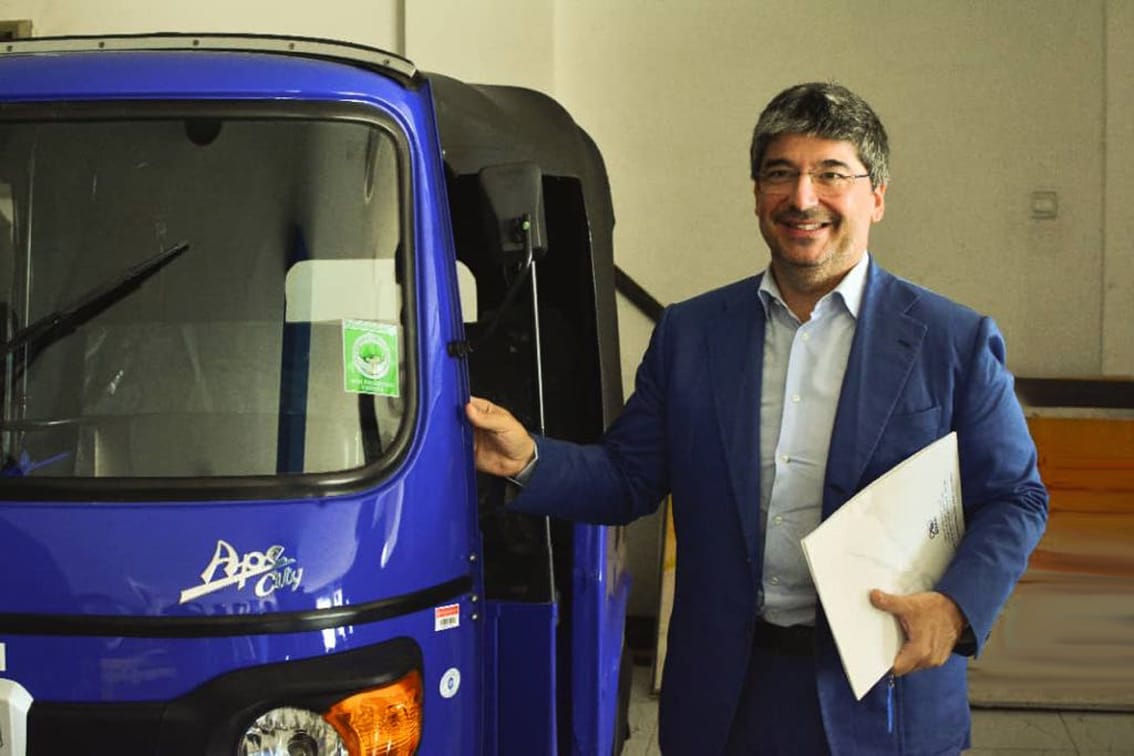 The Italian Ambassador in Sudan, Fabrizio Lobasso, with the Ape City: the vehicle is used for solidarity activities in the capital city, Khartoum.

Khartoum (Sudan), June 2018 – Can a hard-working Ape City help improve life for people in difficulty? This interesting story from Sudan suggests that it can. It all began with the negotiations underway at Piaggio Commercial Vehicles for a business agreement with a Sudanese partner. The various meetings held over the last few months, which were also attended by the Italian bodies active in Sudan, starting with the Embassy, pinpointed a common desire to take concrete action, based on the acquisition, by the Italian Embassy, of an Ape City, the nimble Piaggio three-wheeler, in the passenger version. 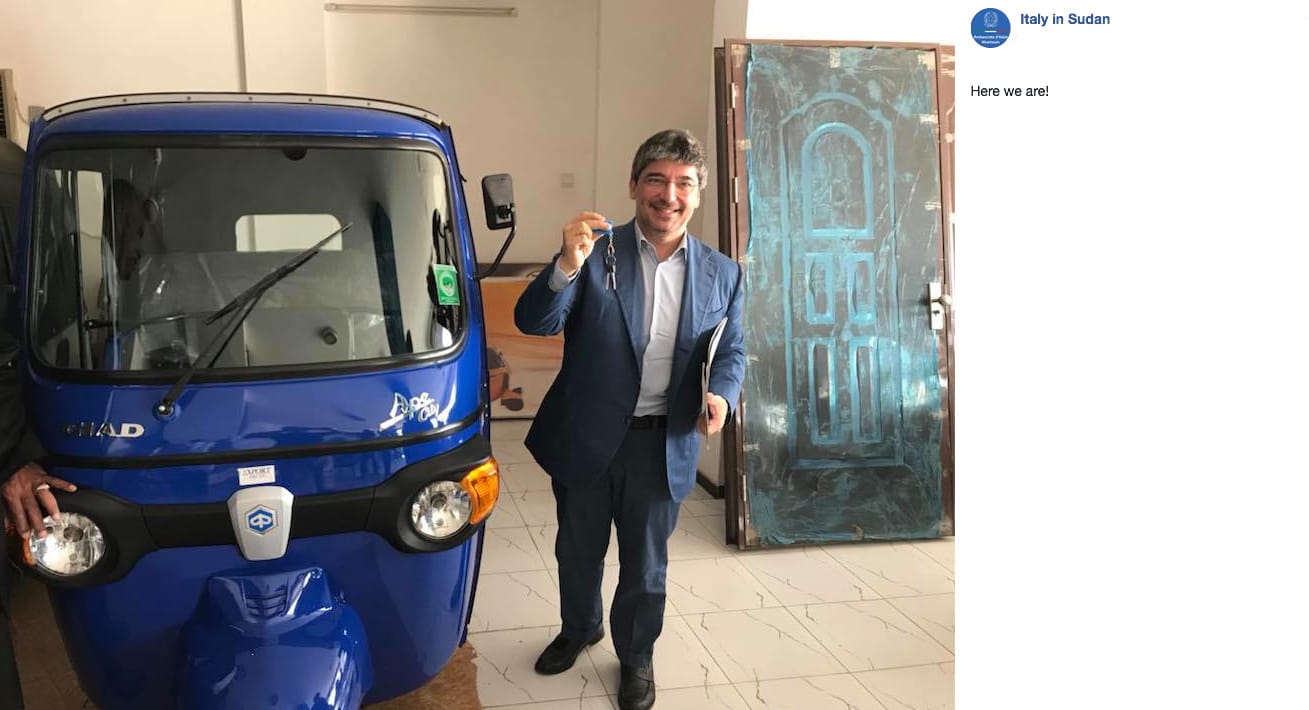 “Here we are!”: Ambassador Lobasso has just received the keys of the Ape City (Italy in Sudan official Facebook page: www.facebook.com/ambitaliasudan).

The Italian institutions associated with the Embassy in Sudan will use the indefatigable van at local level to reach bodies, organisations and associations involved in solidarity and charity work for the poorest sections of society, providing them with assistance and the proceeds raised by the many charity fundraising activities organised now and in the future.

The Italian Ambassador in Sudan, Fabrizio Lobasso tells us more: “This is an all-Italian experiment in solidarity-based intercultural diplomacy, whose purpose is help the most vulnerable sections of Sudanese society, by making use of this three-wheeler, an icon of local mobility (known here as a rickshaw or tuc tuc), to travel across Khartoum to reach the people in greatest need and provide them with the solidarity and friendship of the people who want to help them.” 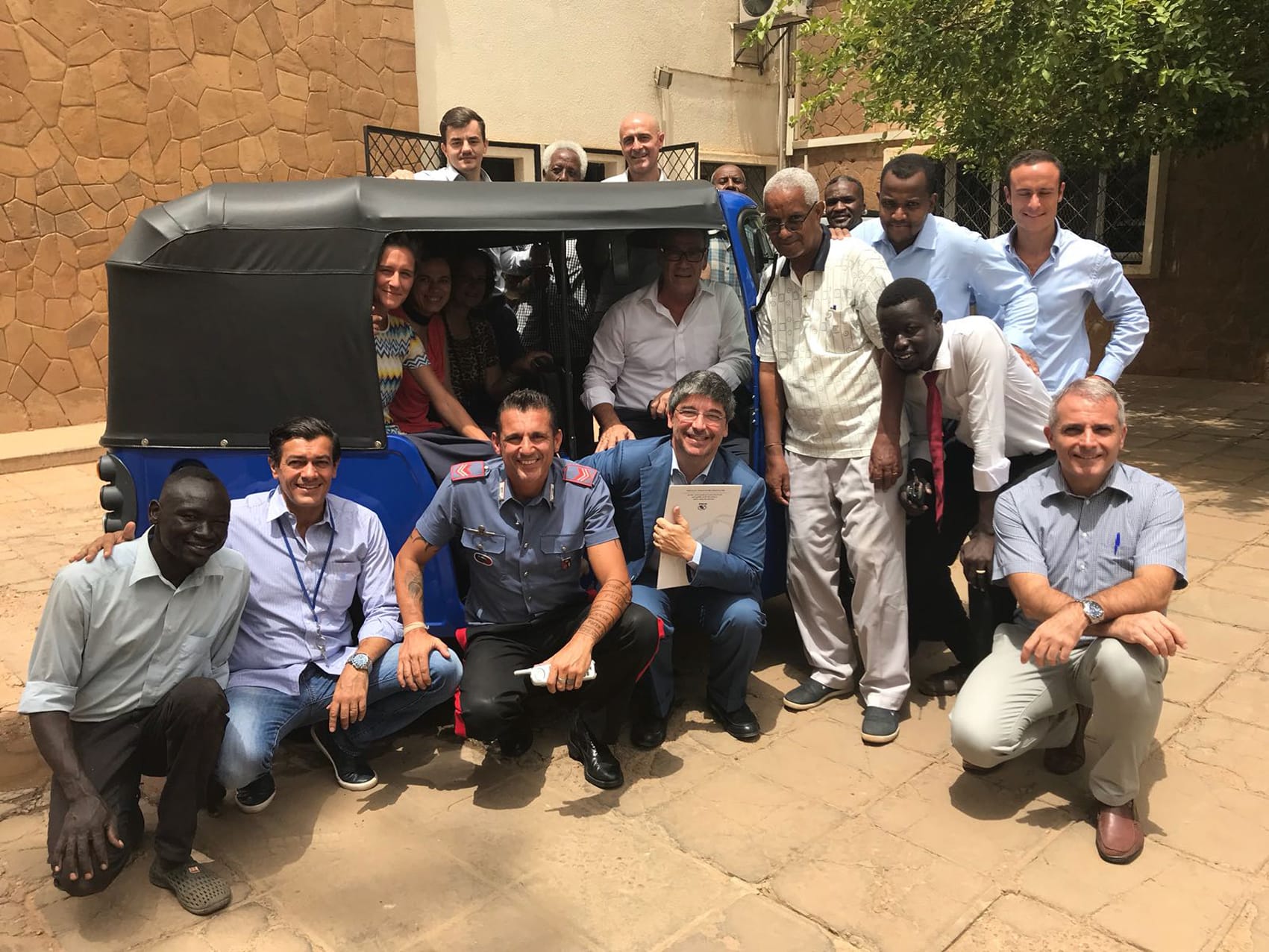 Group photo in Khartoum: Ambassador Lobasso (centre, in a blue suit), with his staff and supporters. Now the Italian diplomatic team in Sudan also includes a Piaggio Ape!

The Ape City in its sober blue livery can already been seen in the streets of Khartoum. One of its first destinations was the city orphanage run by the Missionaries of Charity (the congregation founded by Mother Teresa of Calcutta), which received the proceeds of a recent fund-raising initiative organised at the “Casa d’Italia” (“House of Italy”) with the sale of food products from the Sudanese women’s association Al Raidat, supported by the Italian cultural and sport association for cooperation with Khartoum, as part of the “Tadmeen” development and gender balance project. 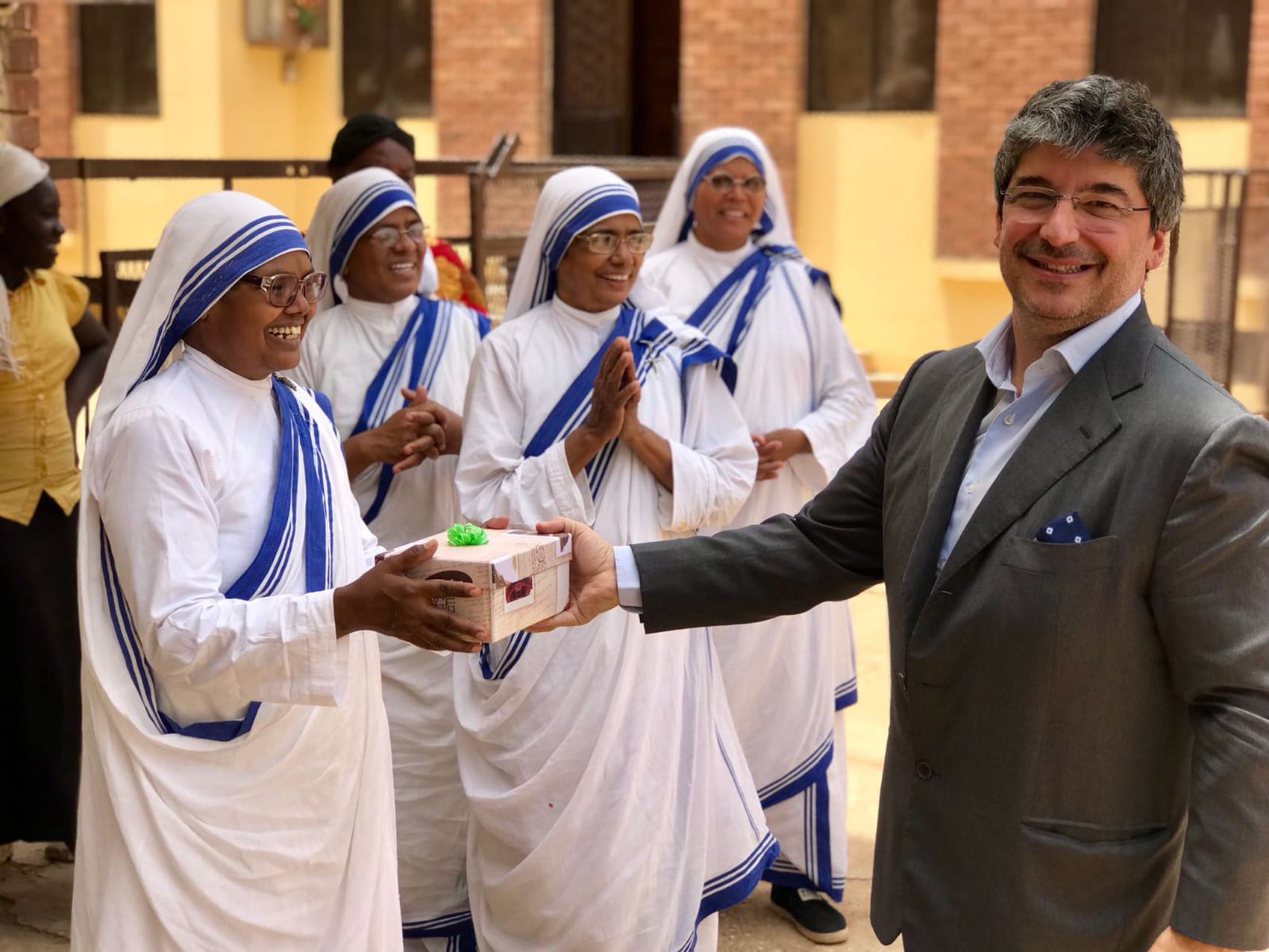 Ambassador Lobasso hands over the proceeds from a recent fund-raising event to the nuns at the Khartoum orphanage; below, he poses with nuns and children together with the Ape City, which displays an Italian flag. 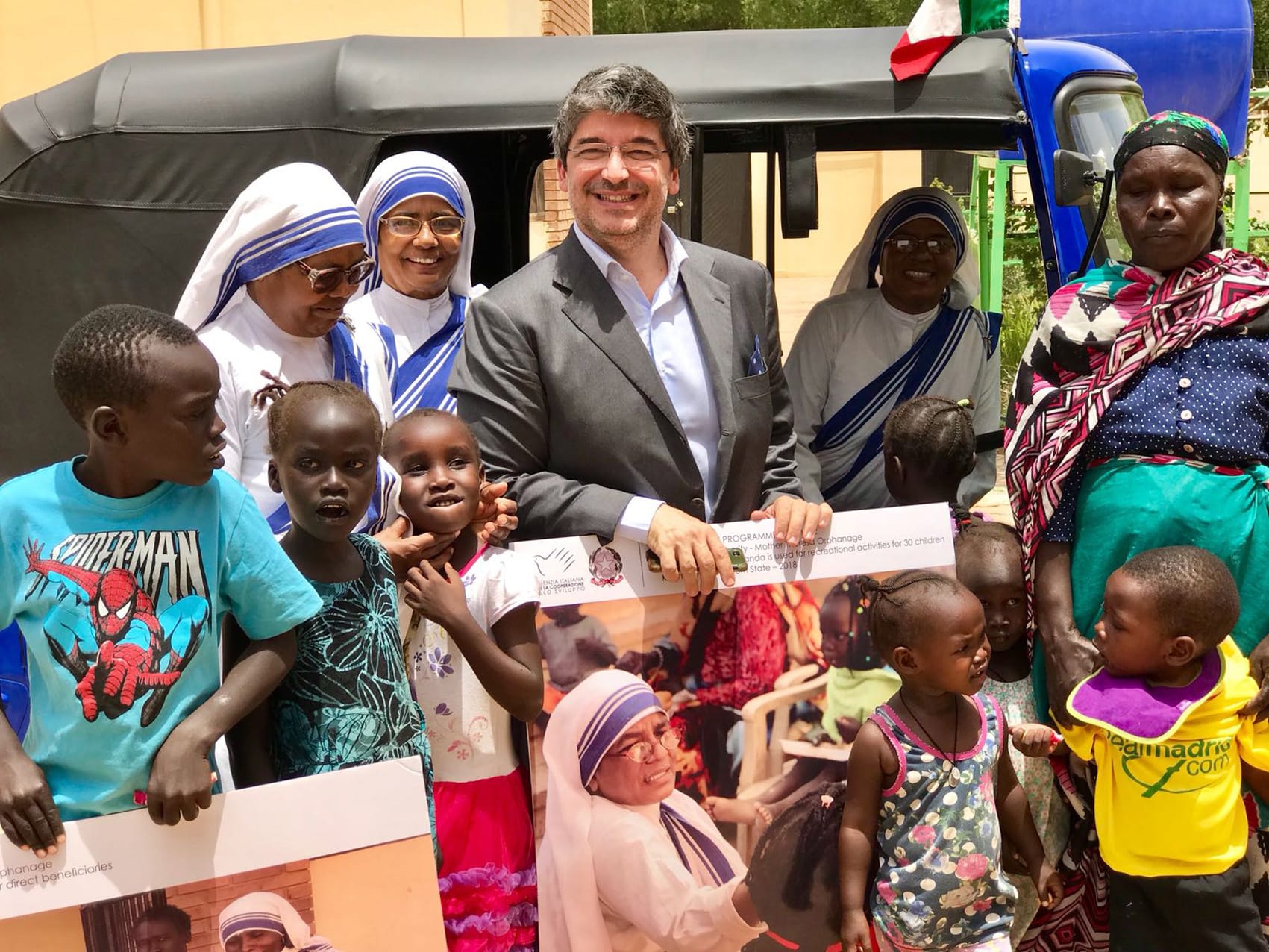 HERE THE ARTICLE POSTED ON ONU ITALIA.COM, THE ITALIAN MAGAZINE OF THE UNITED NATIONS, ON THE “APE FELICE” (“HAPPY BEE”) PROJECT ORGANISED BY THE ITALIAN EMBASSY IN KHARTOUM:
www.onuitalia.com/2018/06/28/ape-felice-a-khartoum-iniziativa-solidale-ambasciata-italiana 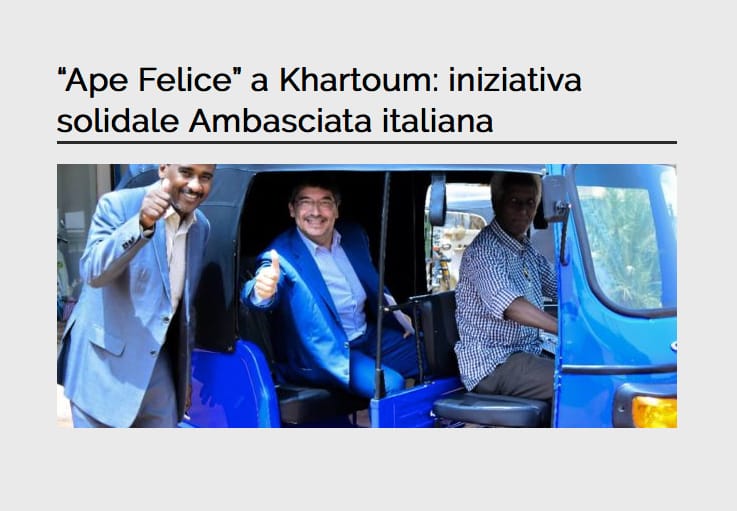 HERE THE PHOTO-NEWS PUBLISHED ALSO ON THE INSTAGRAM OFFICIAL PROFILE AND ON THE WEBSITE OF FARNESINA-THE ITALIAN MINISTRY OF FOREIGN AFFAIRS AND INTERNATIONAL COOPERATION. 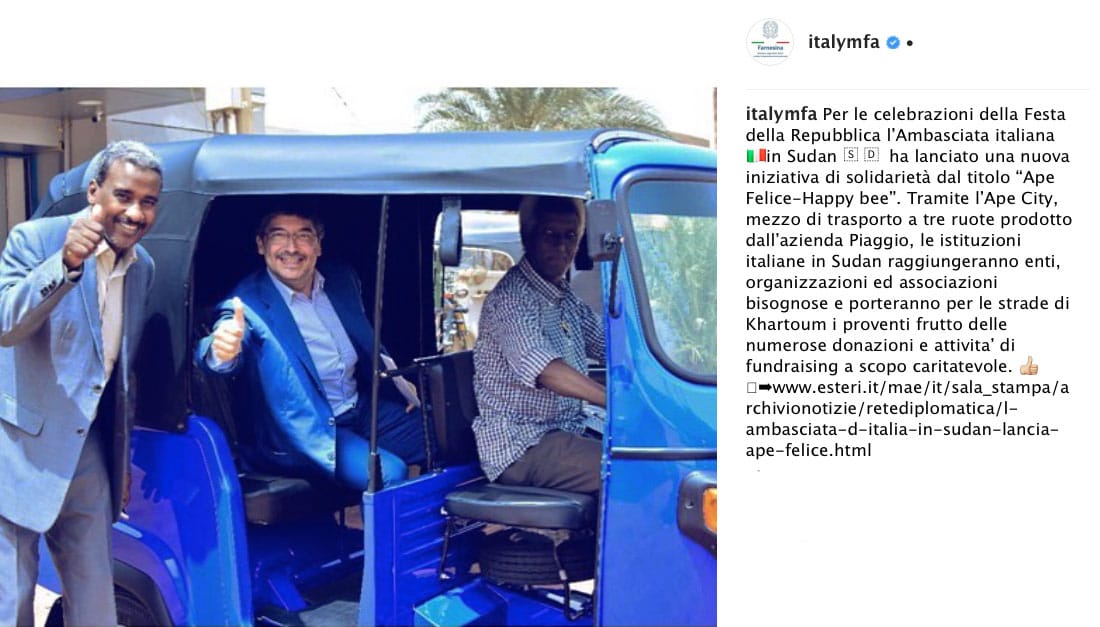 THE NEWS PUBLISHED ON THE FARNESINA/ITALIAN MINISTRY OF FOREIGN AFFAIRS WEBSITE:
www.esteri.it/mae/en/sala_stampa/archivionotizie/retediplomatica/2018/07/l-ambasciata-d-italia-in-sudan-lancia-ape-felice.html