IN MILAN, THE ITINERANT NEWSSTAND ON APE CLASSIC 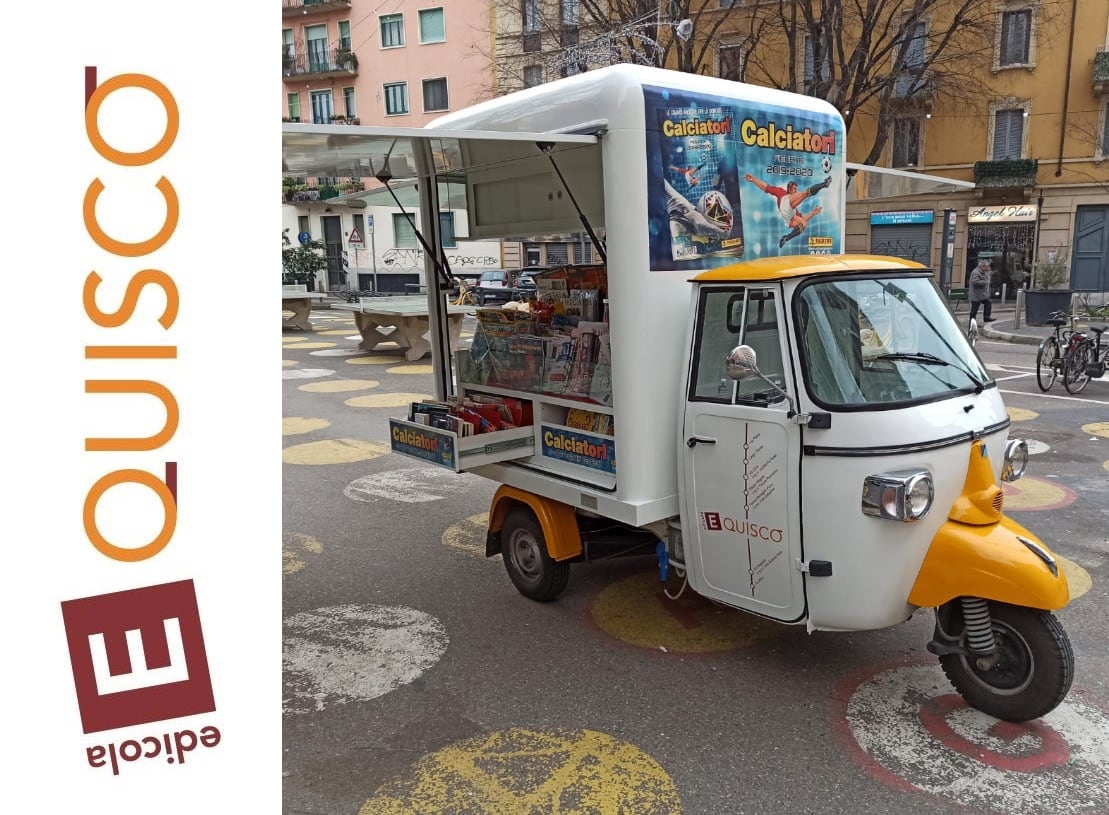 Milan, January 2020 - The announcement on 17 December 2019 via Facebook: “Today the Quisco newsstand opens… and it is a mobile newsstand, on wheels! The mobile newsstand, which you will see from today moving around Milan to pre-established stops such as a tram line, is an experimental format conceived by Andrea Carbini (Milanese entrepreneur and former manager in the publishing and book sectors, flanked by Angelo Galbiati) to work alongside fixed newsstands and support them actively, meeting the demand of the public in high traffic locations where kiosks are no longer present. An experiment to help the press and the world of newsstands, at the same time offering services and attention to customers in the city!”

The Edicole Quisco (Quisco Newsstands) experiment was a success (a project that began in 2017 curated by Carbini and Galbiati): within just a few weeks of the launch, the itinerant newsstand – on an Ape Classic base – is already rather popular with the Milanese (widely echoed in newspapers and magazines and on various TV programmes). With its unmistakeable line and charming look, the Ape Classic – here outfitted in vintage van version, white livery and yellow roof and fenders – surprises and attracts the public. “The mobile newsstand … in addition to selling newspapers, magazines, and other periodicals… is also a gathering point where we listen to the opinions of people. We collect their suggestions on the city blocks and the areas that do not have news kiosks and where we would like to have a stop for the newsstand. If you see it in your area, come have a look and tell us what you would like from the newsstand in your neighbourhood. We also conceived this experimental format in order to hear the needs of the inhabitants”, we read on the Quisco FB page (from the Spanish quiosco, which means “kiosk”).

A useful service, considering the crisis of the editorial sector, particularly printed copy, with a drastic reduction of newsstands in Italy. There are currently more than 15 thousand, 750 fewer than two years ago, whereas in 2001 there were no less than 36 thousand (data from La Repubblica daily newspaper). In Milan alone, Andrea Carbini told the newspapers, 30 a year close up shop. 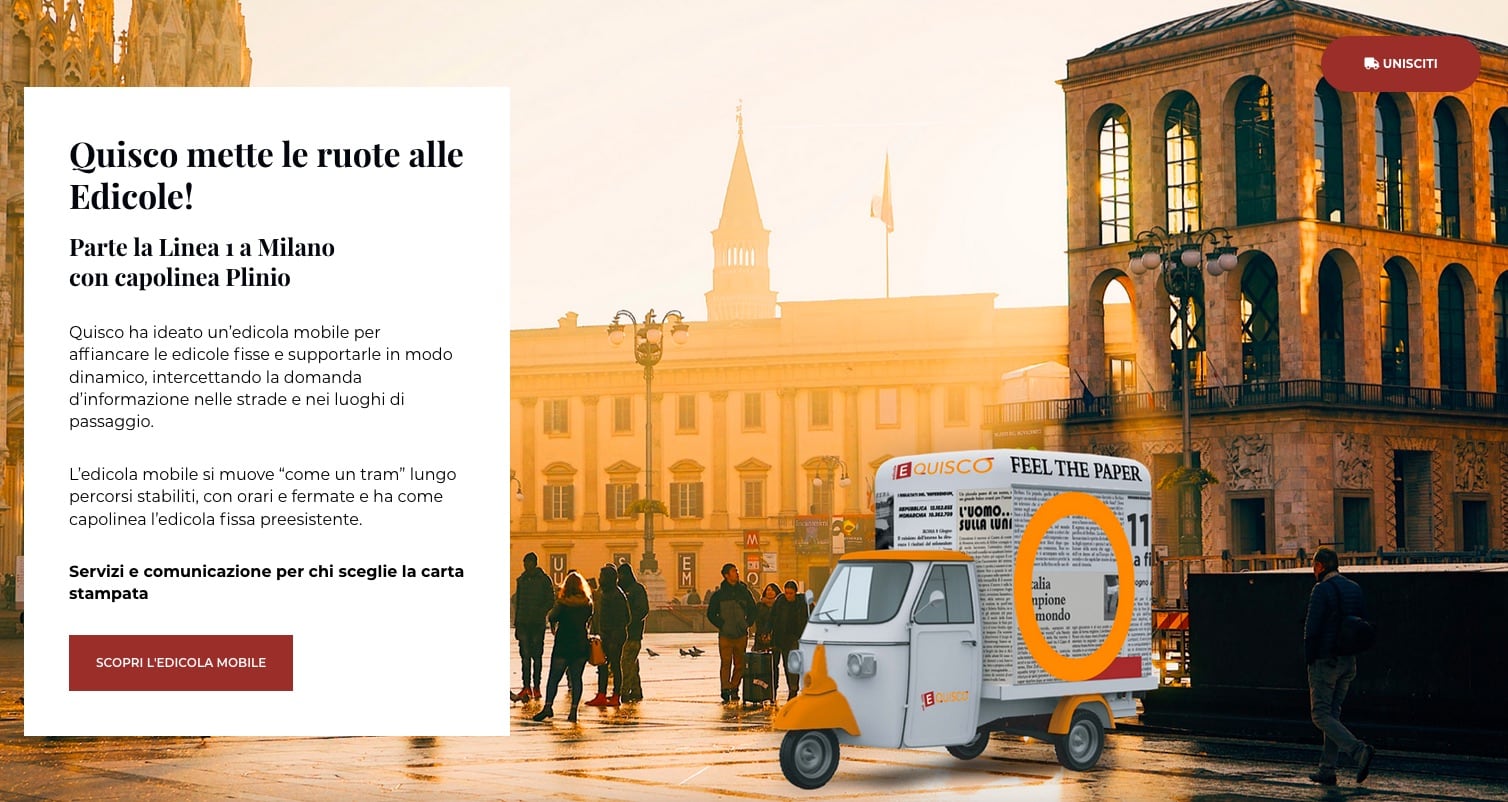 The idea of taking newspapers and magazines on the road, meeting the needs of the citizenry, proved to be brilliant. As was the choice of the vehicle, the relentless and economical Ape Piaggio, the great “transformist” thanks to special outfitting, increasingly more of a protagonist in itinerant sales and street food.
Here is Piaggio commercial-Ape Range info: 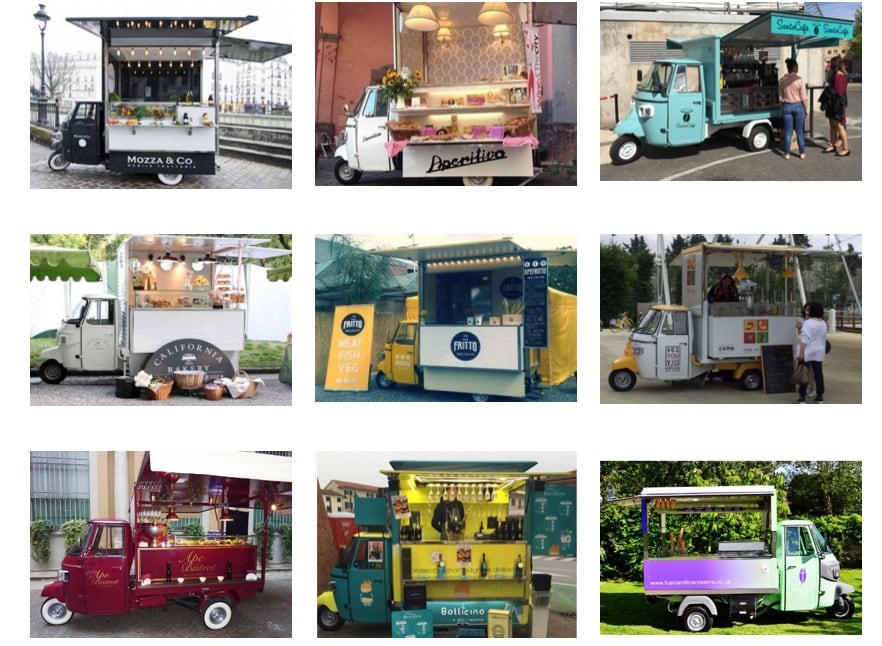