THE WINNERS OF THE VESPA PRIMAVERA CONTEST

A SUCCESSFUL CONCLUSION FOR THE CONTEST ORGANISED BY THE OFRAG IMPORTER: THREE COUPLES ON A TRIP TO ITALY, TO SEE FLORENCE AND THE PIAGGIO MUSEUM IN PONTEDERA. PHOTOS AND INTERVIEWS WITH THE VESPA LOVERS FROM LIECHTENSTEIN AND SWITZERLAND HERE.

April-October 2018 – The invitation made in April by the OFRAG importer in Switzerland (with prestigious headquarters based in Lupfig) was irresistible: “Take part in the contest for the 50th anniversary of the Vespa Primavera (1968-2018): the prizes are three trips to Florence, with a visit to the Piaggio Museum”. Entrants simply had to answer a question about the history of the Vespa, go to a dealer in the Swiss network to have their competition card stamped and send it to OFRAG. Then, with a bit of luck, they would win a trip to Italy (three journeys were available, each one for two people, with a flight to Florence from Zurich or Geneva, two nights in a hotel and a visit to the Piaggio Museum in Pontedera, with a guided tour). 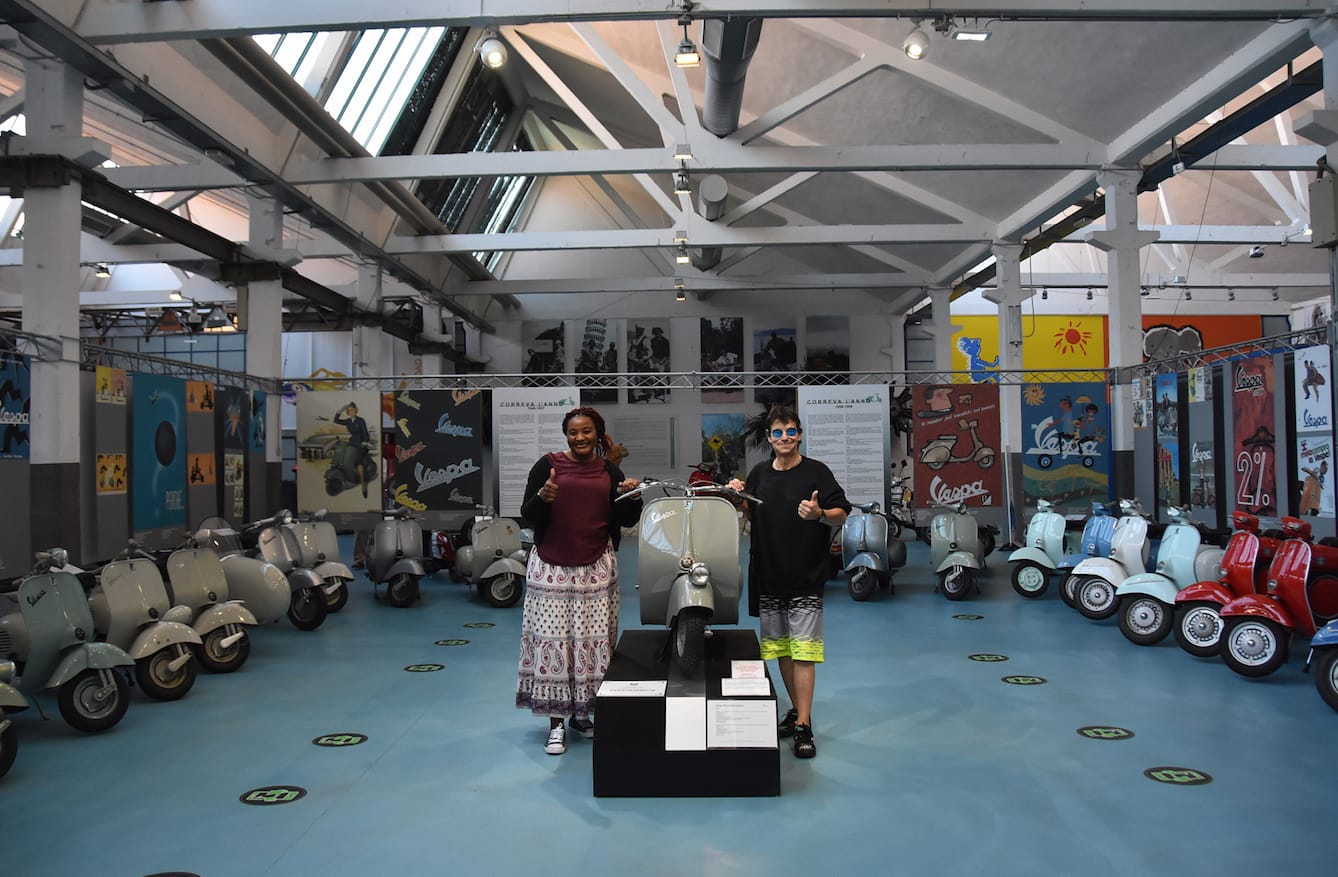 The OFRAG staff were inundated with a flood of cards: after the draw, the names of the winners were announced: Marlies and Robert Wachter (sister and brother) from the Principality of Liechtenstein, who were the first to make the trip to Italy, in August, followed by husband and wife Helli and Claudine Spreng in September, and husband and wife Eduard and Therese Hasler in October. And here they are, in the photos below the title, all six at the “selfie” point in the Piaggio Museum in Pontedera, on a vintage Vespa with sidecar. And here are other photos from their unforgettable visits to the Museum, assisted by the Piaggio Foundation team. After their trip, we interviewed them about their ties with the Vespa (and their favourite models), how they found out about the OFRAG contest and the memories they had taken home from their holiday in Italy. 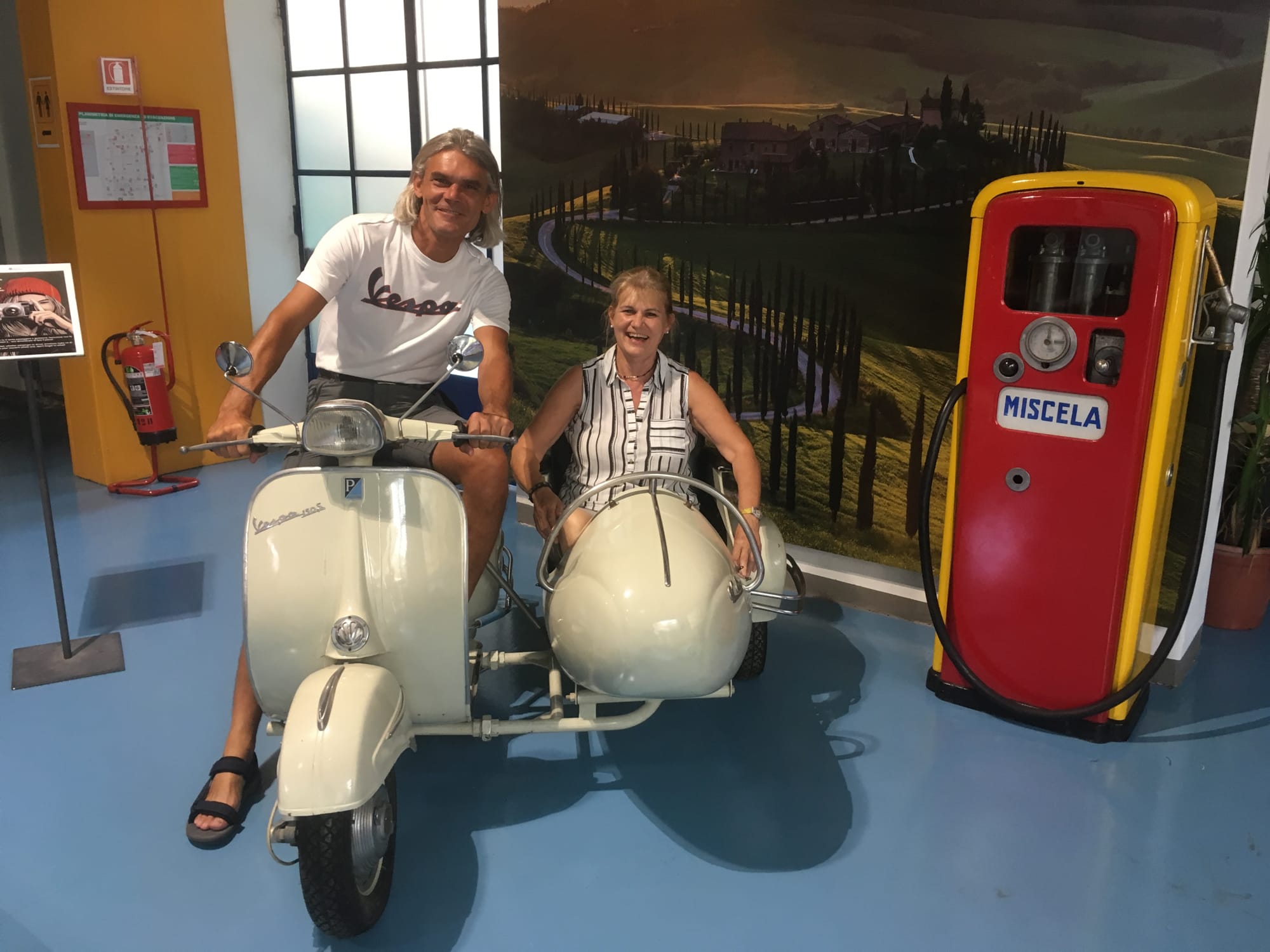 AUGUST 2018. ROBERT AND MARLIES WACHTER – I’VE ALWAYS LOVED THE VESPA: “My sister Marlies and I are from the Principality of Liechtenstein, where we live in Schaan. I’ve always been fascinated by the Vespa, which won my heart when I was a teenager. In 1985, when I was 16, I decided to buy my first Vespa, which I still have today: a white Piaggio V5A Vespa 50R, which I bought in 1985 from the Wenaweser Vespa Centre in Schaan. That’s where I heard about the contest: every year, I go to the spring exhibition at the Wenaweser Vespa Center, and that’s where I took part in the contest and met OFRAG. I was absolutely delighted when I found out I was one of the winners. 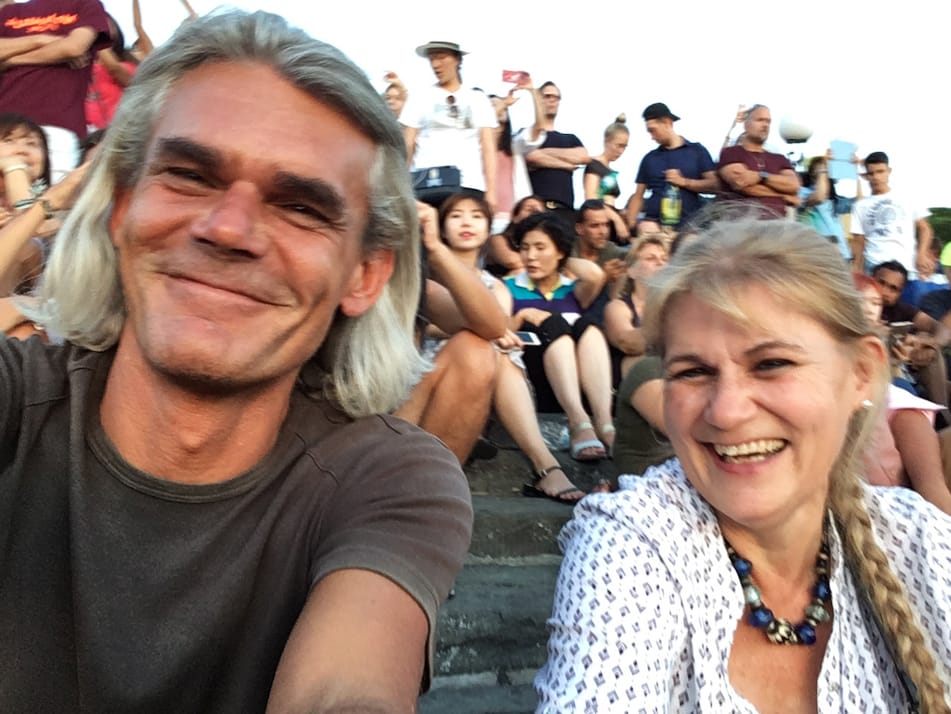 I didn’t know what to expect from the journey: I just wanted to make the most of the opportunity to see Italy. Of course, this was a great surprise for my sister, who came on the trip with me. I’ve never won such a wonderful prize. All my family and friends were excited we’d won such a generous prize, and were very happy for us. I’d already been to Italy a number of times. From north to south, usually traveling by train. I’d seen Como, Lake Maggiore, Milan, Piedmont, Venice, Parma, Rome, Naples, Capri, Bari, Alto Adige, and so on. Why? Because it’s a great country, with its climate, the people and of course Italian food. 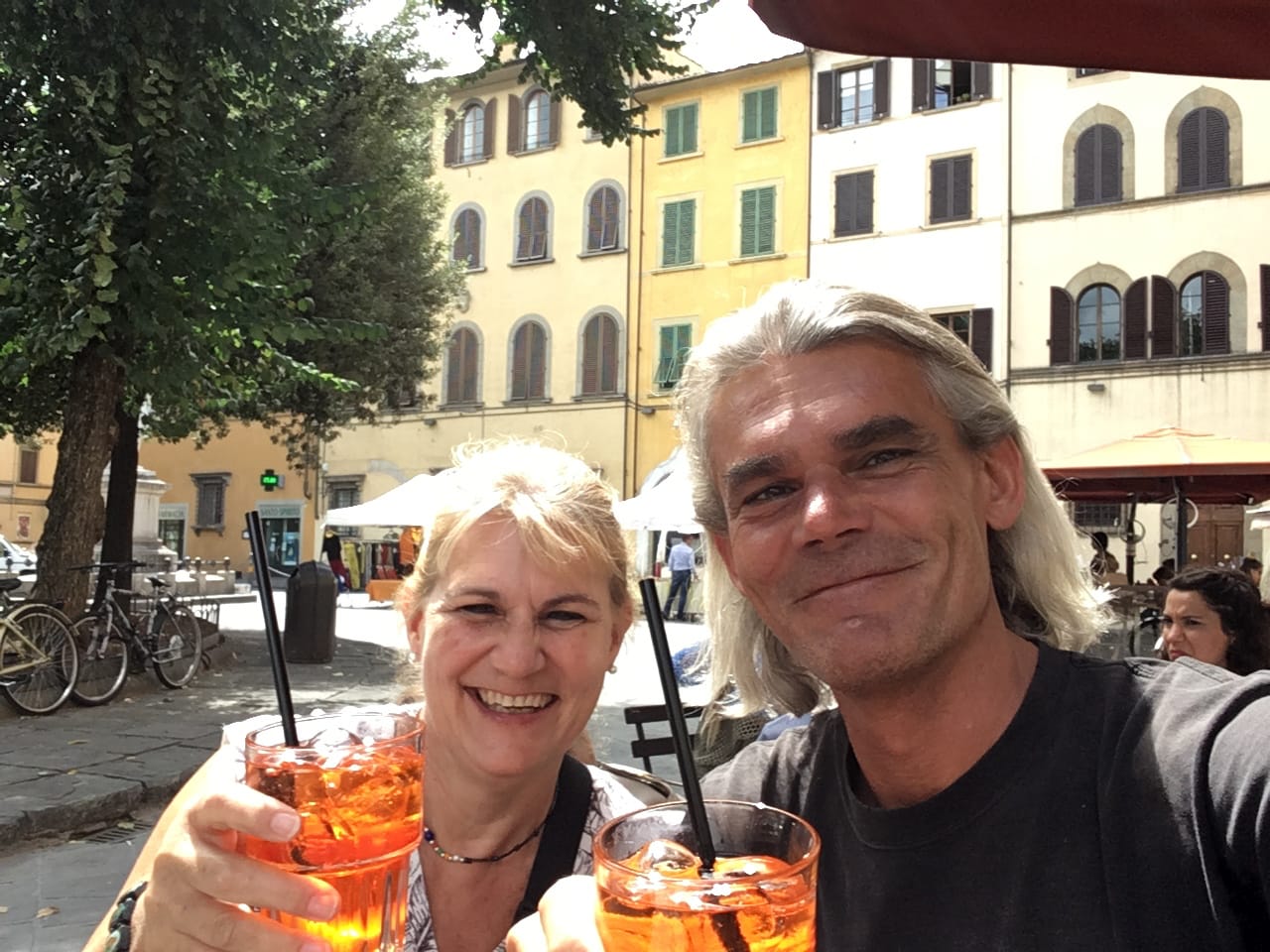 Florence is a beautiful city, and we immediately fell in love with it. The hotel was in the city centre, not far from the wonderful cathedral. We walked all over Florence and saw lots of sights and visited most of the tourist attractions. For example, the cathedral, Ponte Vecchio, many churches and old buildings, with the old roads. We had so many unforgettable moments in Florence; the first evening, for example, we saw the sun set over Florence from Piazzale Michelangelo. It was simply wonderful! like a dream. 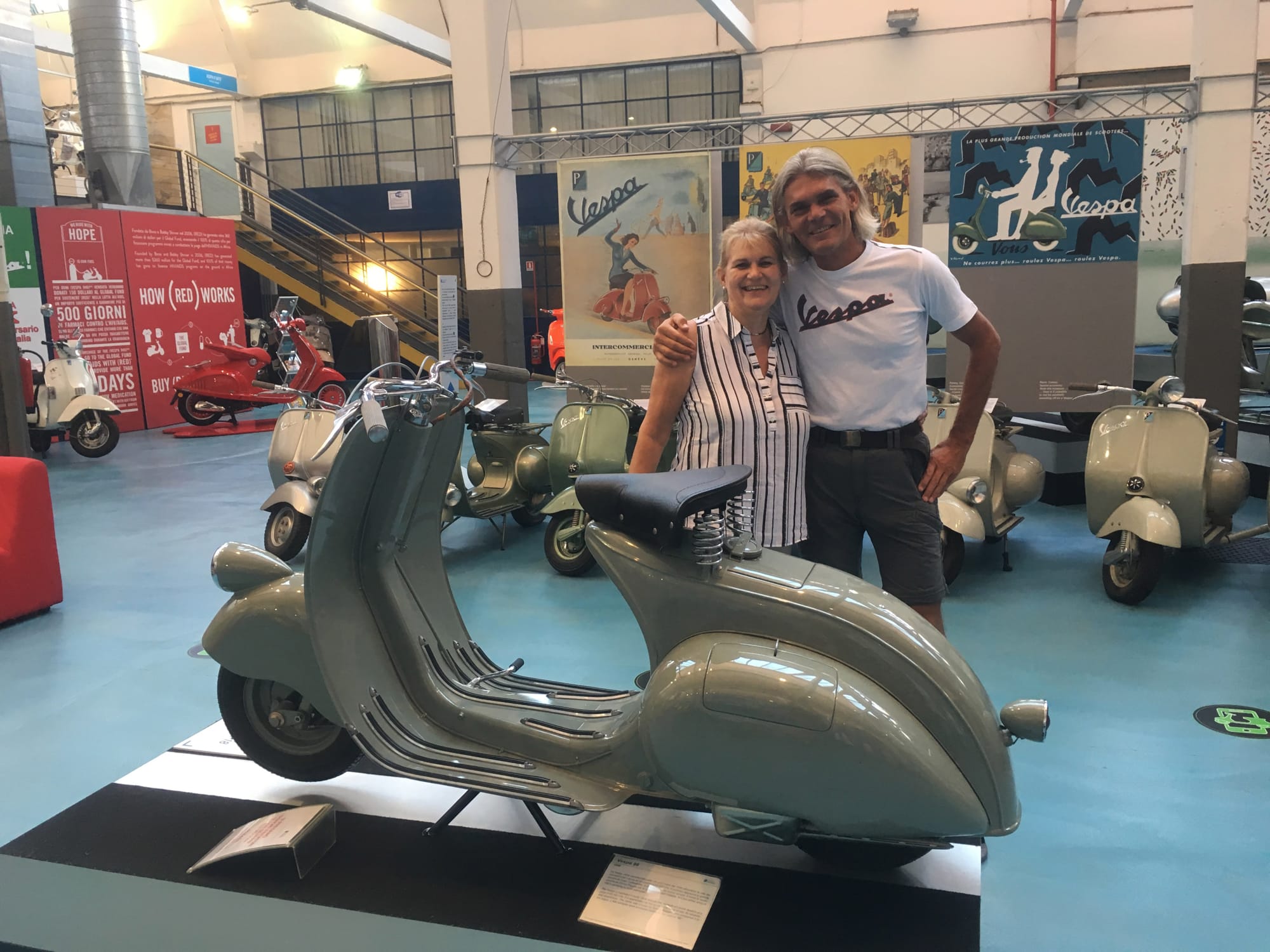 We were very impressed with the Piaggio Museum in Pontedera. It’s well organised and the long history of Piaggio and the Vespa is very interesting. The staff was so kind. I don’t have a favourite Vespa model, because I like so many of them: I prefer the vintage models. We had a wonderful time in Florence and the Vespa Museum, which we’ll never forget. Thank you! We liked the Museum so much I’m sure I’ll continue to be a Vespa rider!” 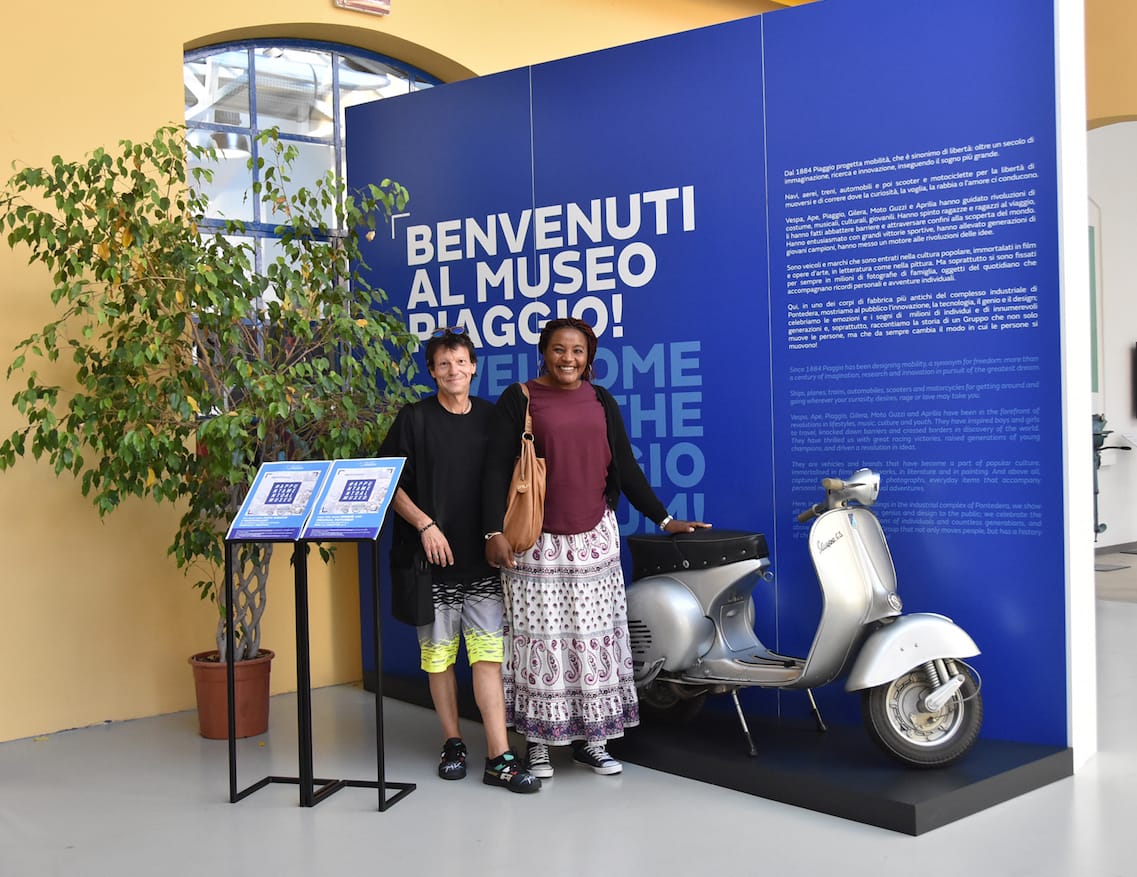 SEPTEMBER 2018. HELLI AND CLAUDINE SPRENG – TWO-WHEELER DEVOTEES: “Thank you for your warm welcome and the wonderful visit to the Piaggio Museum. My wife and I won the contest for a trip to Florence, with a guided tour of the Piaggio Museum in Pontedera. We live in Switzerland, near Lausanne. We don’t have a Vespa, but we’re mad about motorbikes and two-wheelers in general. And of course, like everyone, we’re familiar with the legendary Vespa model. I won this contest when I purchased a motorcycle from a Piaggio dealer in Switzerland. I was really surprised and delighted to win this wonderful trip for two to Florence, with the visit to the Piaggio Museum. We had already visited Italy on previous occasions, to Fiorano, Milan, Bologna, Gubbio, etc.

We had a wonderful time in Florence, and visited many buildings, museums, churches, bridges and so on. It really is a stupendous city with its impressive historic heritage. The trip to the Piaggio Museum was a magical moment for us, and something we shall remember. Visiting the museum is an extraordinary experience. The Vespa is fantastic, as are all the other vehicles conceived and designed by Piaggio! I strongly recommend the museum to travellers who have the opportunity to spend some time in this marvellous place. My favourite Vespas are the Vespa (RED) and the 50th anniversary Vespa. 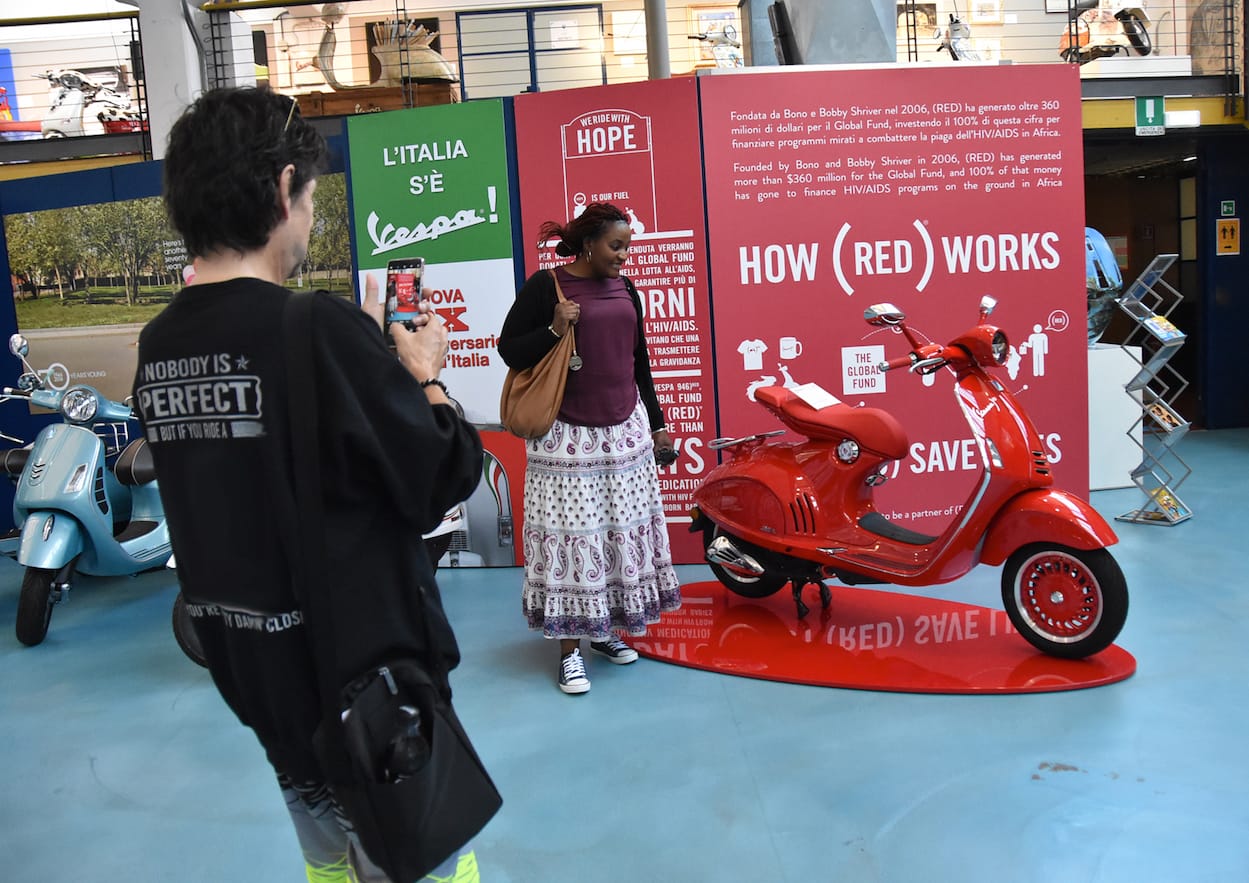 For me, the most interesting moment was the tour of the new rooms exhibiting the Aprilia, Gilera and Moto Guzzi bikes: a really wonderful collection of legendary models. And it was wonderful to be next to the Aprilia Moto GP 2017. We came home with great photos and hope to return for another visit. Thank you for this unforgettable experience.” 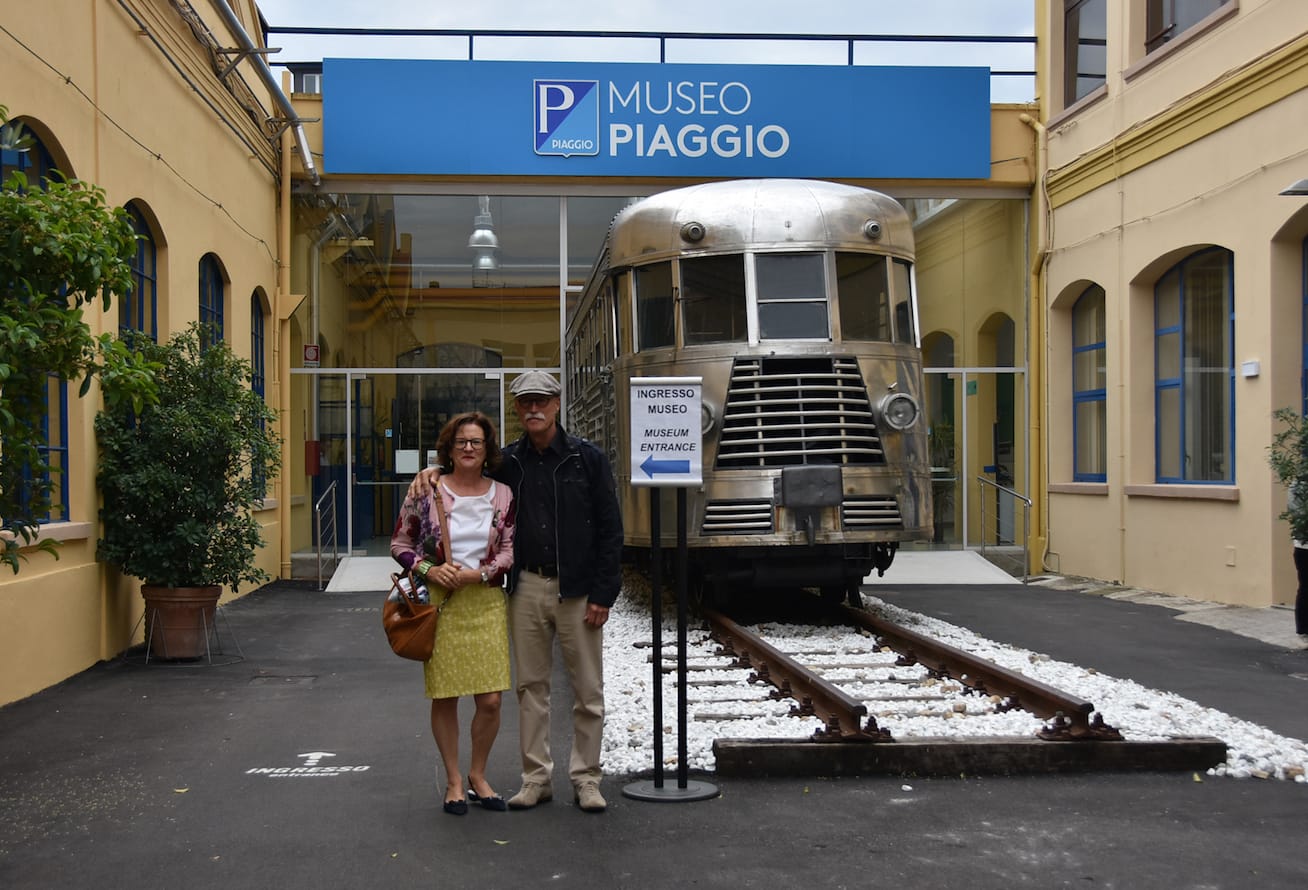 OCTOBER 2018. EDUARD AND THERESE HASLER – FAMILY ON A VESPA AND DAD ON A MOTO GUZZI: “Many thanks for your warm welcome on our visit to Pontedera. We live in Switzerland, near Lucerne,” says Eduard. “I have been riding a motorbike for years (I have a Moto Guzzi) and I have ridden a Vespa PX for more than 20 years. The whole family uses the Vespa, although our son is the one who rides it most. He’s just come back from a holiday with his girlfriend: they covered more than 900 kilometres, and crossed a number of Alpine passes. They had a great time.

I heard about the OFRAG contest through the papers. I was very surprised when I heard I was one of the winners, since I’d never won anything before. The whole family shared my excitement (even if the ideal thing for them would have been to win a bright red Vespa for my wife, with an automatic gearshift!). We have already been to Italy many times. We often had beach holidays with the children, especially on Elba and in Sardinia. My wife and I have toured all of Italy's most famous cities. And I often go to the Dolomites on my motorbike. 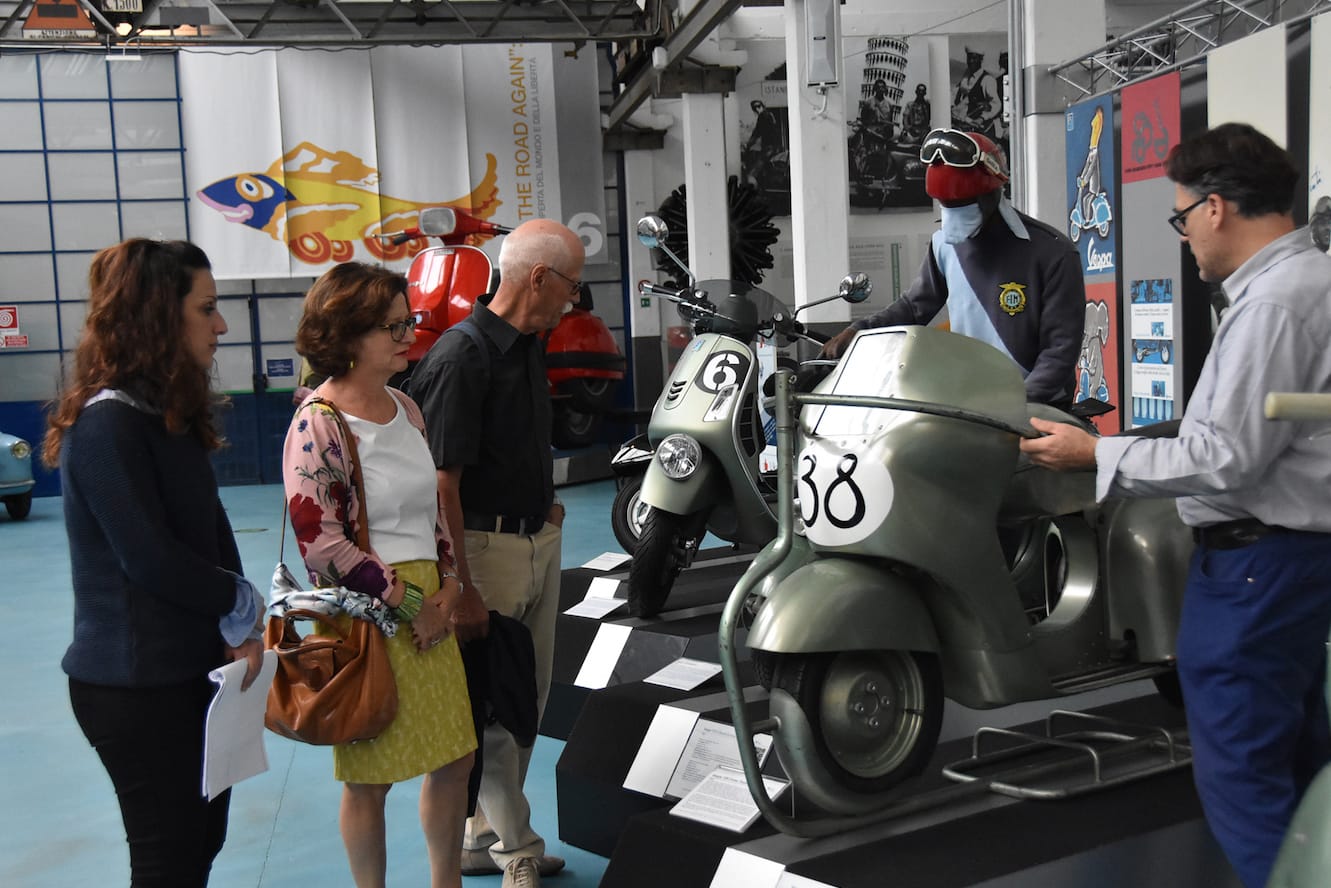 We already knew Florence, but Piazza del Duomo is always a breathtaking sight. We went to the Uffizi, Santa Maria Novella, the market and ate a lot of wonderful food. The visit to the Museum was unforgettable: the history of Piaggio’s entrepreneurial development is explained well and is fascinating. The Museum is very well organised and provides a great deal of information. I was very excited by the many Vespa models on display, beginning from the first prototype through to the racing models and the fast aerodynamic model. My favourite models include the Vespa GTS and the PX with manual gearshift. One of the best moments of the trip was the very warm welcome we received at your Museum. The whole experience was fantastic. Our best wishes to Piaggio, for a future full of success and innovative ideas.” 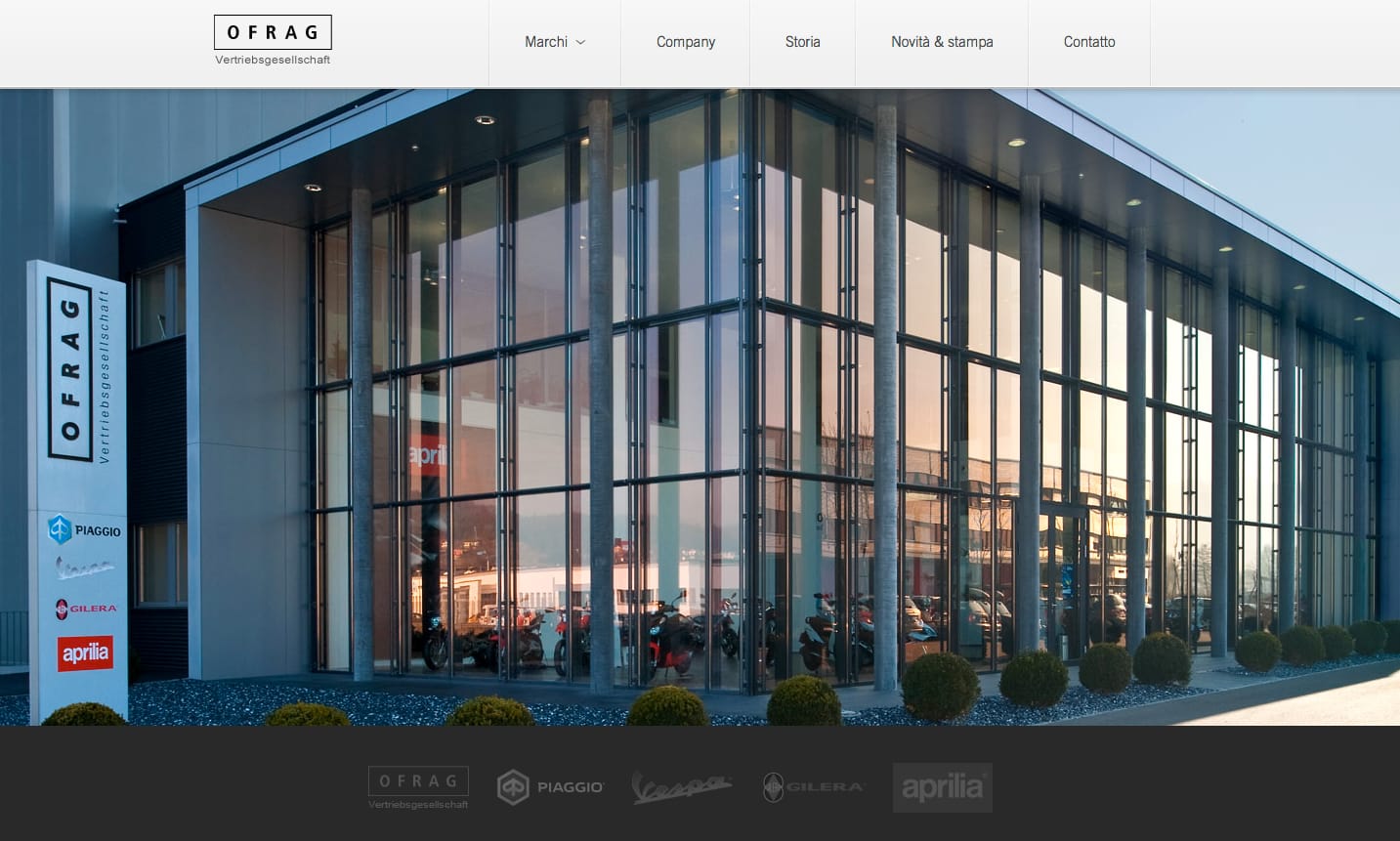