A GRISO IN SAN DIEGO, A GRISO IN CABRIS. TRACY NUZZO TELLS THE STORY… 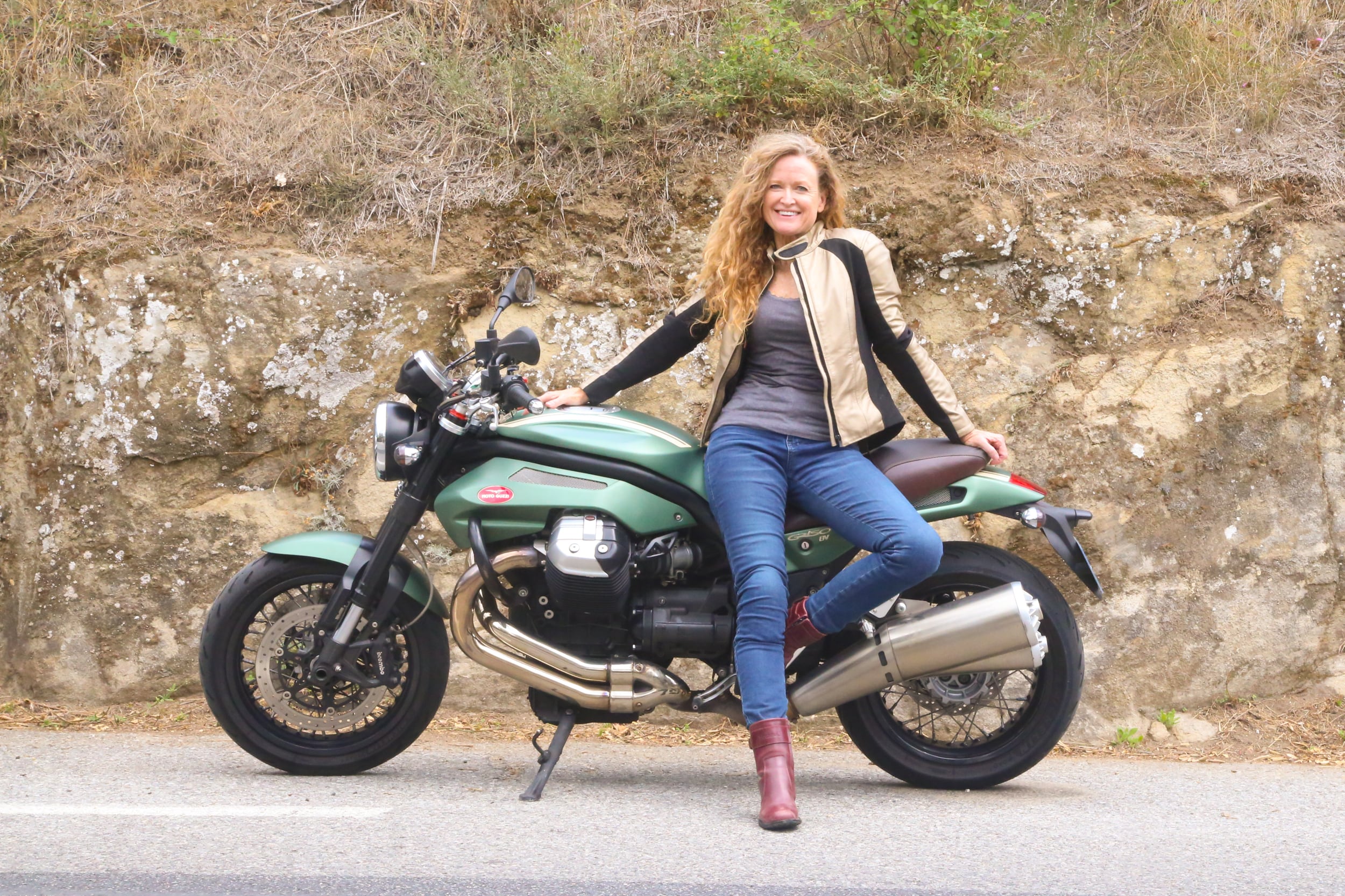 AN AMERICAN BIKER, SHE FELL IN LOVE WITH MOTO GUZZI IN A MINNESOTA DEALERSHIP. SHE HAS TWO GRISO TENNI BIKES: ONE IN CALIFORNIA, THE OTHER IN SOUTHERN FRANCE. ARTICLE-INTERVIEW BY ROBERTO POLLERI; PHOTO BY MARCO BELLIMBUSTO.

September 2022 - Her name is Tracy Nuzzo, an English teacher who moved to Southern France years ago for work. She owns not one, but two Moto Guzzi Griso Tenni models, truly distinctive bikes. One is in California, whereas the other “lives” in France so she can enjoy her Guzzi passion on both continents - in Europe and in the States. She began riding motorbikes inspired by her grandfather at just five years of age and at nine, she was already proficient on her Honda Trail 55 that she used to perform in various evolutions. Her grandfather passed on to her his love for bikes, a central figure in her life growing up. Even now, she still owns her Honda and her 1972 Suzuki TS 400, two items that hold great significance for her. 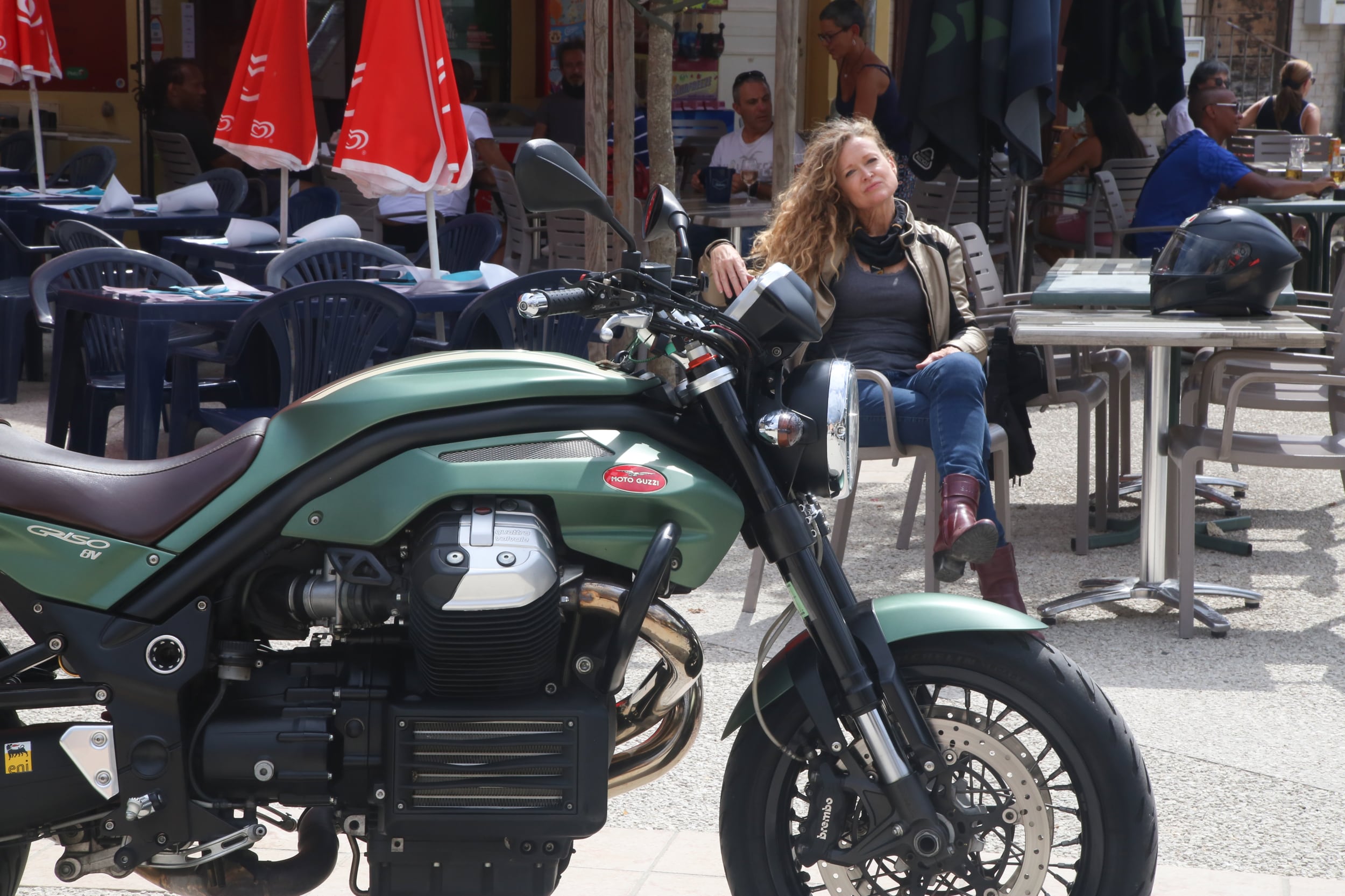 Moto Guzzi then forced its way into her life. Tracy was in a dealership in Minnesota on a dreary winter day, not knowing exactly what she was looking for; definitely a bike but she had no idea what make or model. There, among the mostly anonymous others, was one that stood out from all the rest. It had a satin green paint finish, a brown leather seat, spoked wheels, a transversal twin cylinder, and an enormous exhaust silencer… it was a Griso. She had heard about them, since they were used by the California Highway Patrol. With this vehicle in her heart, she went back to California and began reading everything she could get her hands on about the brand from Mandello del Lario and its incredibly fascinating heritage. It was at this point that she developed a burning desire for a 2012 Griso SE Tenni that she immediately took out on her favourite road, Highway 1 along the California coast, past Malibu toward the ocean, and then on the 101 near Monterey and Carmel. She then moved to France where, even there, she needed to ride a Moto Guzzi on the Route de Napoleon that runs between Cabris and Castellane. 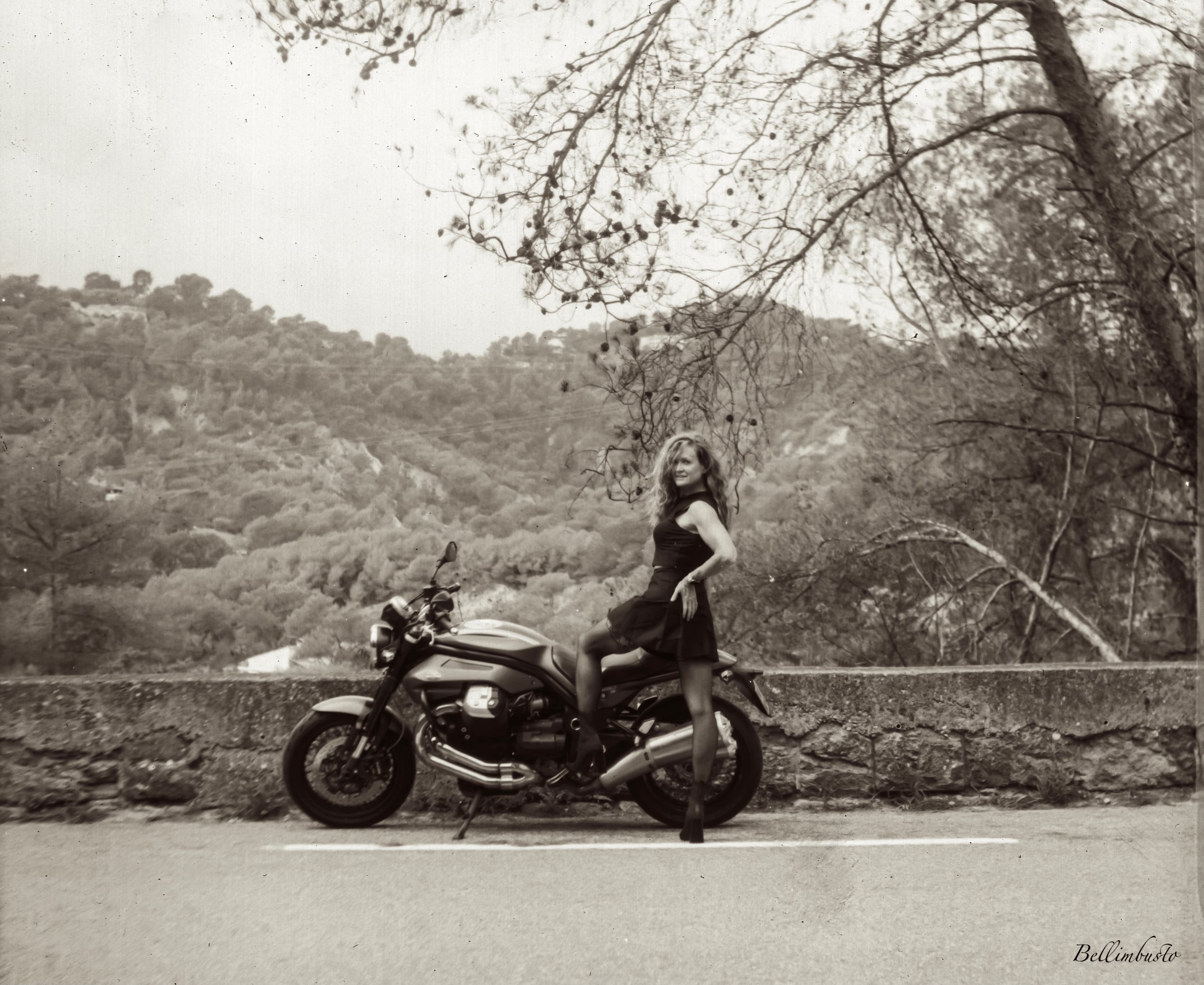 The Guzzi experience in the USA.
“Ten years ago, being a Guzzi fan was very difficult in Southern California. Finding a reseller was next to impossible. This has changed in recent years. The popularity of the V7 really contributed to raising brand awareness. I’ve met some huge Guzzisti in the USA! People like Bill Ross, Donny Angel, Bob Johnson, Nolan and Alex Woodbury, friends who are always ready to reply to any doubt I may have and, I must say that I had plenty at the beginning...”
Tell us about Europe as well, and Italy in particular...
“I love Italy. I love the architecture, the history, the bikes... but especially the people. Italians are warm and friendly. As luck would have it, however, I moved to France seven years ago, where I teach English. My new home makes it easier to get to Italy, which is wonderful for me!”
As an American, she admits that she is “universally” fascinated by European architecture (anything made of stone is new for us, she explains) and the whole lifestyle. She finds that life in Europe is less hectic and stressful. Europeans take the time to sit around the lunch table discussing life, for hours at a time. In the United States, everyone is usually in a rush both with meals and with everything else and she doesn’t like that very much... Tracy has many friends in Italy and in France and she enjoys the cultural exchange, as well as sharing the passion for bikes. “I think that learning to appreciate cultural differences makes people more interesting,” Tracy adds.

Now let’s talk about Mandello del Lario and the Moto Guzzi meeting…
“I love (and in her message to me, she writes it in all caps…) Mandello del Lario. I still remember the first time I rode my Griso from France for the rally in 2017. A long trip that led me to paradise. There were thousands of Guzzis and thousands of Guzzisti... For the first time, I wasn’t in the motorcycling minority, like in the USA! I loved the warmth and friendliness of the enthusiasts and the people of Mandello. From then on, I’ve been back almost every year and I go by at least a couple times to enjoy the roads around the lake. This year, I arrived on Saturday morning astride my trusty Tenni Griso, ahead of a sea of bikes and people. I had been waiting for this rally all year and apparently I wasn’t the only one. I was astonished at how many other Guzzisti had made the pilgrimage to Mandello del Lario for the event. Even if I’ve been going every year since 2017 (with the exception of 2020, obviously), I had never seen so many bikers and people in attendance. Truly staggering.” 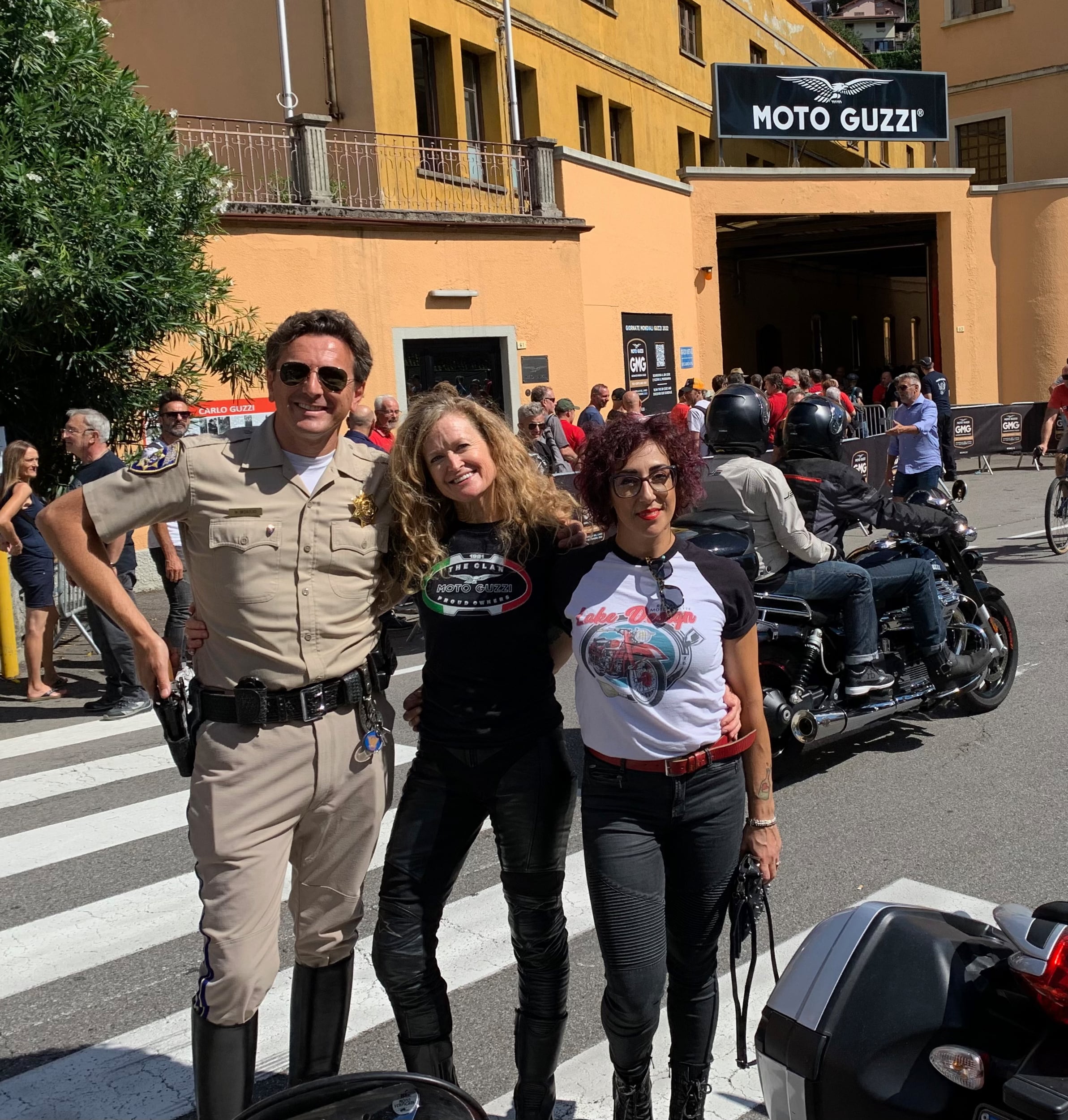 “This rally isn't just about motorcycles, but it’s also about the friendships that are forged during the event and the renewal of contacts every year, so it was a great opportunity to see familiar faces. For me, the highlight of the event was seeing dear friends like Arianna Crippa of Lake Designs, and Marco Mobilio dressed in a CHiPs uniform. The only disappointment was that I didn’t get the chance to see the V100 in person. The queue to get in was the longest I had ever seen in my life. All I can do is wait to ride one as soon as they're available in dealerships. I can't wait! At the end of the day, I think this Rally will go down in history as a unique event - demonstration of Moto Guzzi’s growing popularity. A tangible sign that the brand has truly ‘arrived’, especially with the young generations, since every year I see more and more people in their twenties there, thanks to the success of the V7 and the V85TT. I'm sure that the V100 will further increase brand influence and loyalty in the years to come... Here’s hoping for another 100 wonderful and innovative years for Moto Guzzi! Counting down the time until Moto Guzzi Days in 2023! Next year, I’ll come a few days earlier this time!” 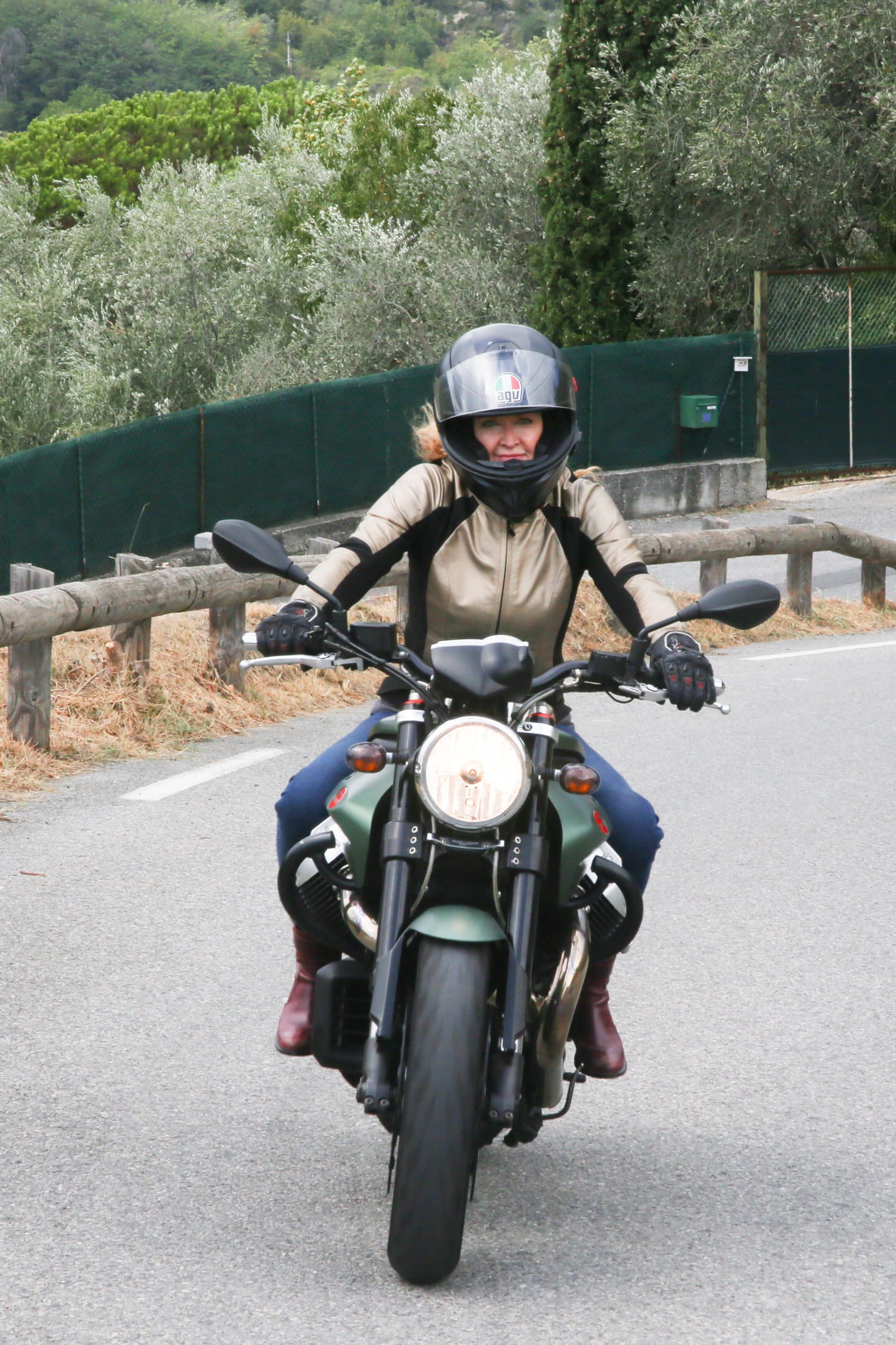 Shall we talk about Guzzi rallies in the USA now?
“In the United States, some time ago I participated in a Moto Guzzi ‘NADA’ in Lake Henshaw, Southern California. It was a special time with fantastic people. There were about thirty of us who made the trip along the west coast of the United States. Participation was truly extraordinary, with more than ten thousand people! A true record.”

What does it mean to you to be a biker?
“Being a biker is… simply great! Most people are surprised when they find out that I ride a motorbike. They're even more surprised when I show up on a 1,200cc vehicle. They think I must have some small bike - a 125 or 250. Being a woman makes me more famous in the Guzzi world... there aren’t as many of us! I ride because I love this dimension and I can’t imagine giving it up. Like many have already said, I love the feeling of freedom that I have on a bike. The sensation of being able to simply throw a bag on my back and take off to go wherever I want to, making new discoveries as I get there.” 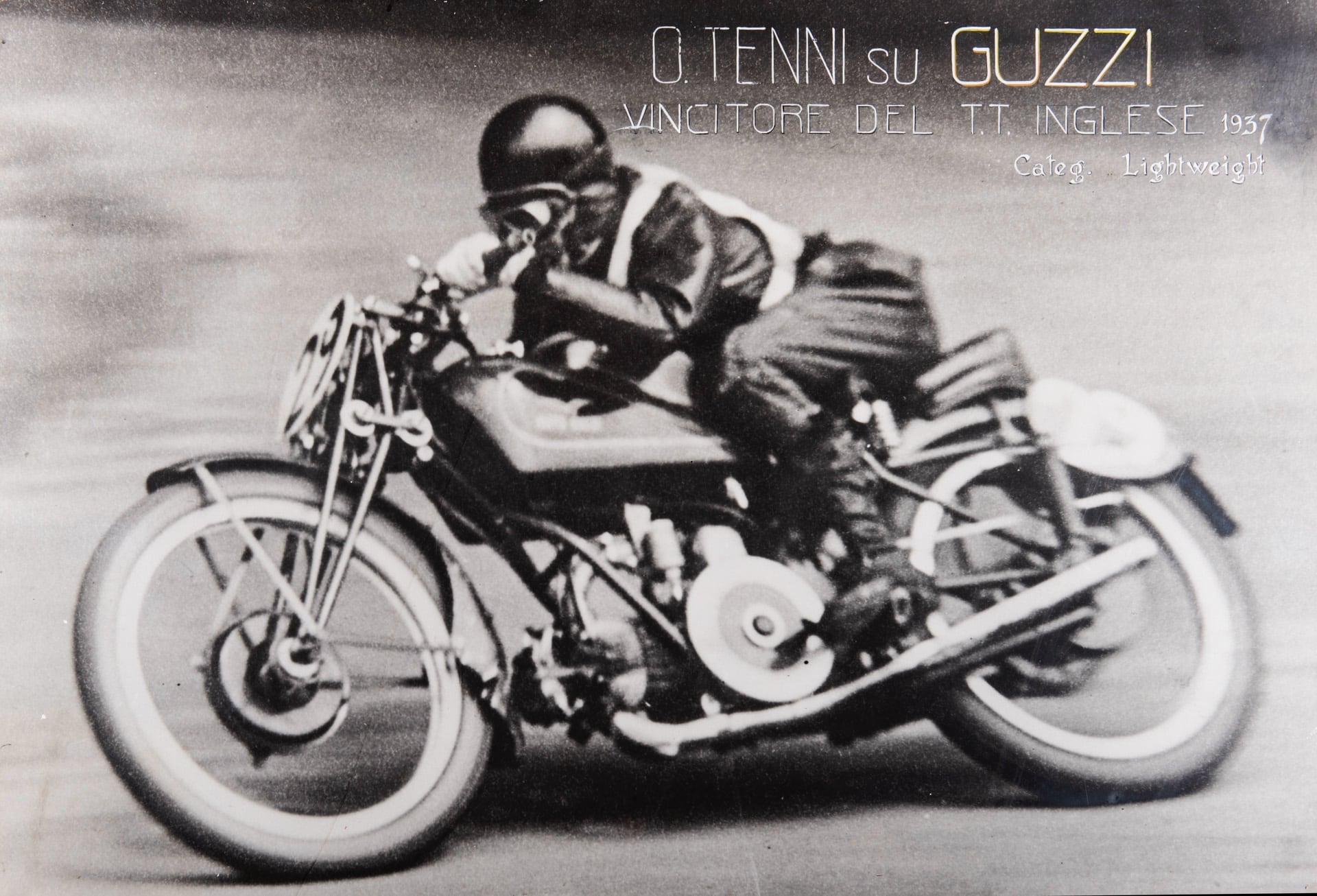 Tell us about “your” Moto Guzzi.
“Moto Guzzis have character and personality. They aren’t ‘normal’ vehicles. My Griso is a perfect example. That sensation I get from the sound of the engine, the way it leans slightly when I twist the throttle a bit, the response, the power, the beauty... It is simply a bike with an extraordinary look and sensations. It isn’t an ‘easy’ vehicle, though. It takes practice and experience. I'm proud of having spent the last ten years learning to maximise its potential.”
What do you think of the modern Guzzis?
“I like the modern Guzzis and I really appreciate the V85TT. I’d like to have a bike to ride off road, like I did when I was younger. Obviously, I’d want the Centennial version, which would match my Griso’s livery! I took a test ride in Mandello, thanks to the dealer Agostini, and I found the V85TT to be an extremely interesting bike - agile with a comfortable riding position. I can’t wait to discover the brand new V100 Mandello,” she exclaims enthusiastically.

Thank you, Tracy, for your precious testimonial! You are an authentic Guzzi Girl!