“CROSSING FOR LIFE”: MISSION ACCOMPLISHED. ASTRIDE A VESPA ON A RESCUE CATAMARAN, SAILING ON LAKE MAGGIORE FROM PIEDMONT TO LOMBARDY 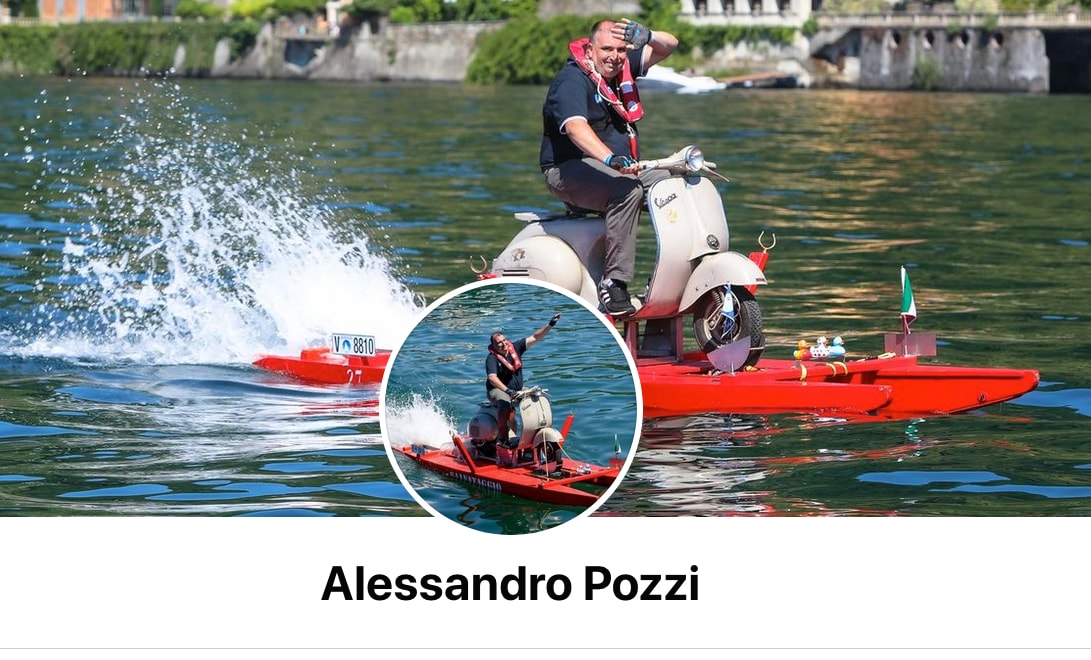 June 2021 – It is a well-known fact that Vespa inspire enterprises and helps the bold. One of the most original, successful challenges is definitely the “Traversata per la vita” [Translator’s note: Crossing for life], a charity initiative in favour of the Fondazione Giacomo Ascoli of Arese (Italy). The protagonist was Vespista Alessandro Pozzi and his vintage Vespa, specially outfitted to drive a propeller system, anchored to a rescue catamaran that crossed Lake Maggiore on Sunday, 13 June 2021, from Cannero Riviera, in Piedmont, all the way to the Luino bank in Lombardy. An unprecedented undertaking, over seven kilometres long and about two hours of sailing.

Alessandro Pozzi, 39 years old, commented for the numerous journalists who followed the challenge: “Vespa is my life, and this vehicle was specifically conceived and built. I can say that it is the only Vespa in the world registered as a vessel and that it can therefore sail in any waters.”

And he reminded us of the “historical” precedents: “The only crossings until now were done on the sea: the crossing of the English Channel by French rider Georges Monneret, October 1952, astride his ‘amphibious’ Vespa, and the one over the Strait of Messina done by Francesco Foti, July 2017, who recently passed away and to whom I dedicate this undertaking with my ‘Peraspera’, as I've called my sailing Vespa.”

Great support from Vespisti: about a hundred of them left the Piedmont shore to reach Luino, going through Switzerland, Ascona, Locarno and then re-entering Italy, to wait for Pozzi to arrive in front of Palazzo Verbania. Safety was guaranteed by four supporting boats and a Carabinieri patrol boat, as well as a Guardia di Finanza helicopter.

Here is the chronicle of the event by Augusto Gaudino (Vespista from the Biella area-Piedmont, a volunteer in various associations, Commander of the Order of Merit of the Italian Republic). “The crossing for life was a fantastic event, extremely well organised without leaving anything to chance, including participating hotels and restaurants. There was unexpectedly high attendance - according to local authorities, at least 2,000 people on the two shores of Lake Maggiore and a ‘land’ contingency of about 100 Vespisti from all over Italy, from neighbouring German and Italian Switzerland (Stefan, president of the local Vespa Club) and from Hungary (Alisca) who tackled the Cannero Riviera, Locarno, Luino itinerary. Swiss Customs even participated, authorising the riders’ passage. 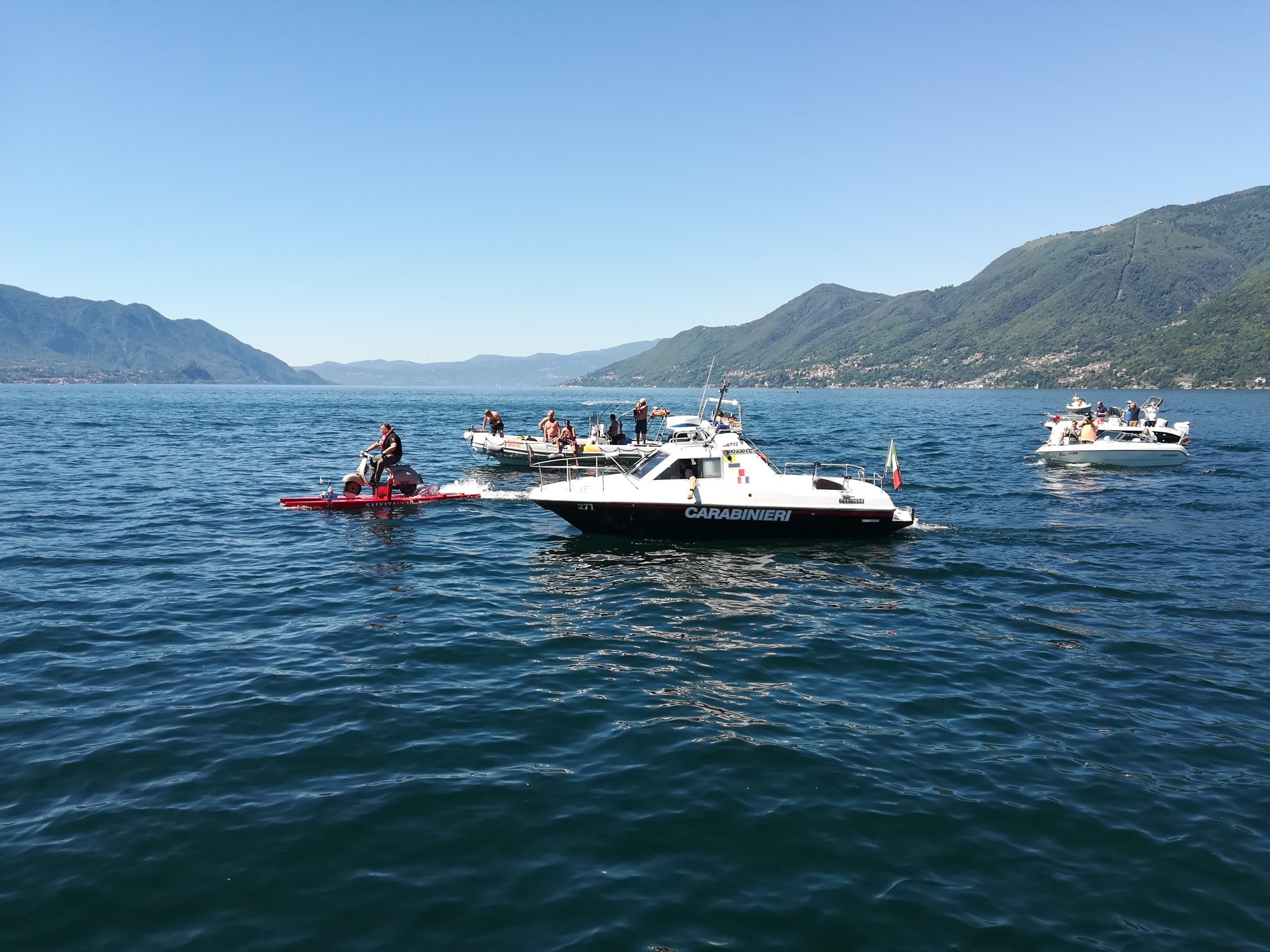 The Carabinieri also contributed with a patrol boat, as well as the Guardia di Finanza (Finance Police, ed.) with a helicopter, accompanying the crossing, in addition to three support boats with divers, journalists and friends. We followed Alessandro Pozzi on a 60-seat electric boat, filled to occupancy, made available by the organisation and powered by solar energy. The enterprise was commented for the entire route by Laura Basile of RADIO NUMBER ONE and by a member of the famous ‘I Legnanesi’ group, Carmelo, who made the day fun and light-hearted.

Source of images and info: www.facebook.com/Altruismolanostrameta

A large crowd had gathered for the arrival at the Luino lakefront and in Cannero Riviera it was difficult to find a place to watch the departure. The presence of all the local authorities, both on the Piedmont and Lombardy side, gave the initiative an even more polished look. 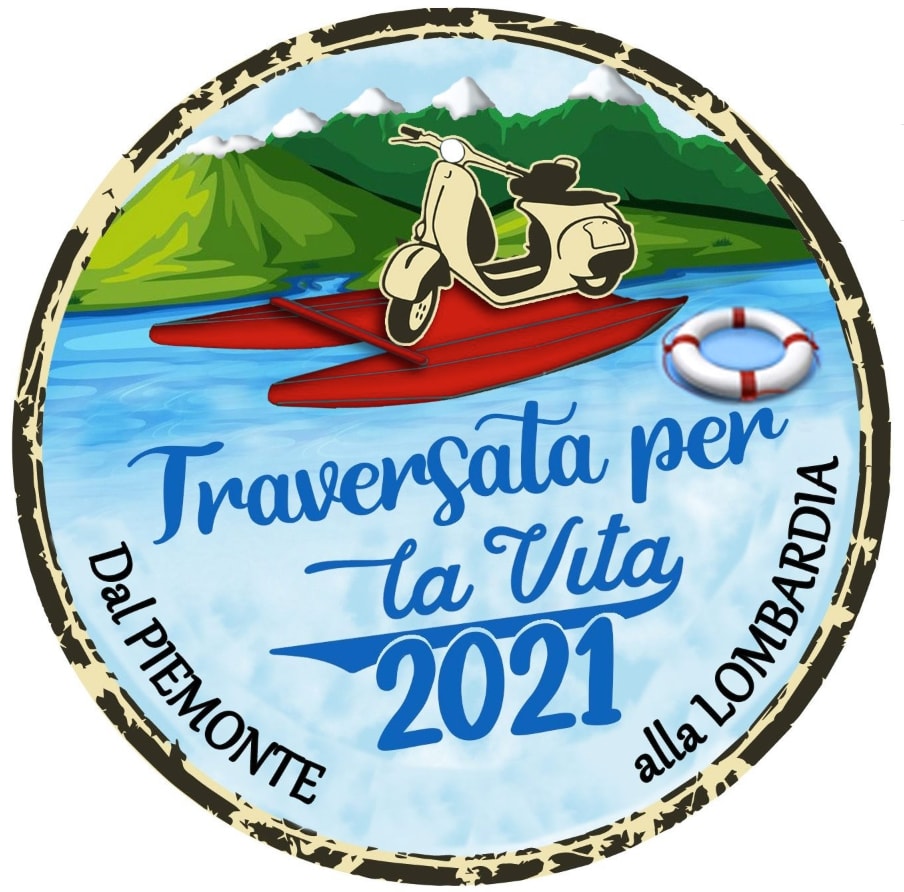 There were stands at the arrival in Luino set up by the Association, Motorcyclists and other companies with games for the children and souvenirs of the crossing symbol, a duckling in a thousand different forms. The give-aways that the Vespa World Club was kind enough to send were popular with everyone. We’ll also hand them out at the next event, called ‘Vespando in Turin and France 3’ (editor’s note: cultural Audax on Vespa, to discover Turin and the Mont Cenis, Iseran, and Petit St. Bernard Alpine passes, 30-31 July and 1 August 2021), which is to raise awareness on the problems of Autism and motorbike therapy for the autistic.

Source of images and info: www.facebook.com/Altruismolanostrameta

Feedback was unanimously positive and the president of one of the Vespa clubs said that ‘he had never seen so many people that were so happy and ready to do good’. In fact, some of those in attendance made on-the-spot donations to the Fondazione Giacomo Ascoli of Varese. 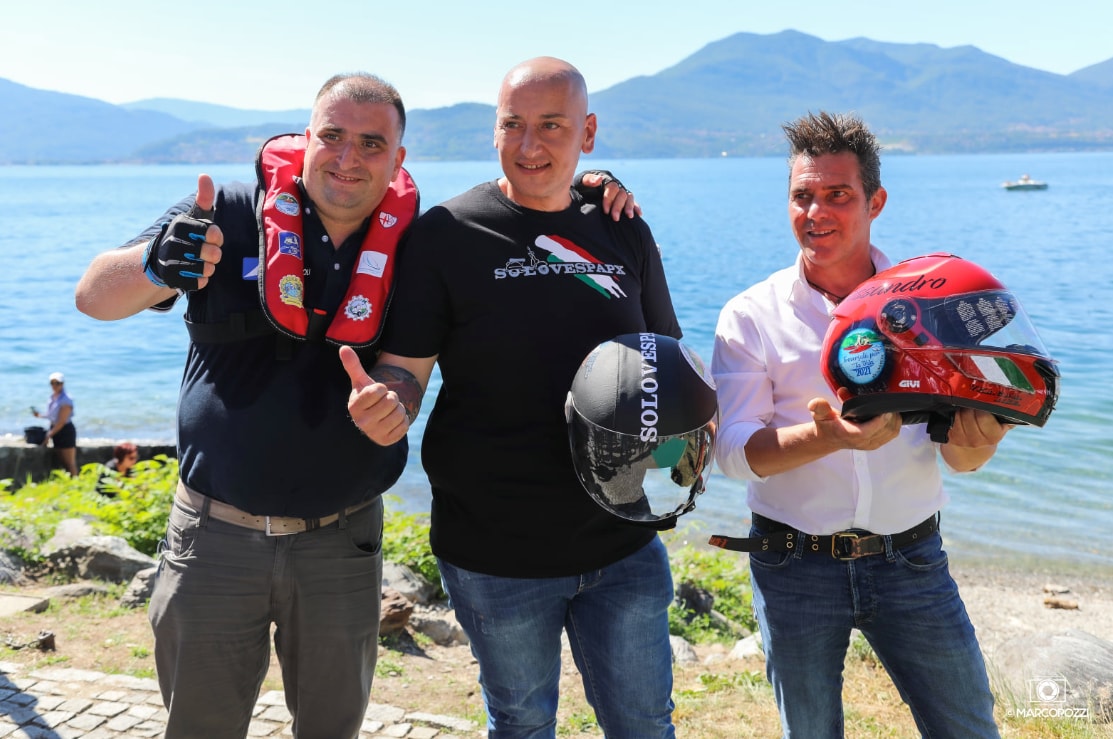 But the adventure does not end here, because the news was widely reported by the media and Alessandro Pozzi has received several proposals to repeat the undertaking, both in Italy and in Switzerland, as well as from two museums who want to exhibit the vehicle that accomplished the crossing, Vespa and catamaran included. In conclusion, there was great satisfaction, and the auction is ongoing for the helmet donated by GI.VI. and customised by Simone Grandi of VER.CAR.BIKE of Gaglianico, in the Biella province. There will be another auction for a second helmet donated by the SoloVespaPX group that came from Campania to follow the event.” This is the big heart Vespisti have! 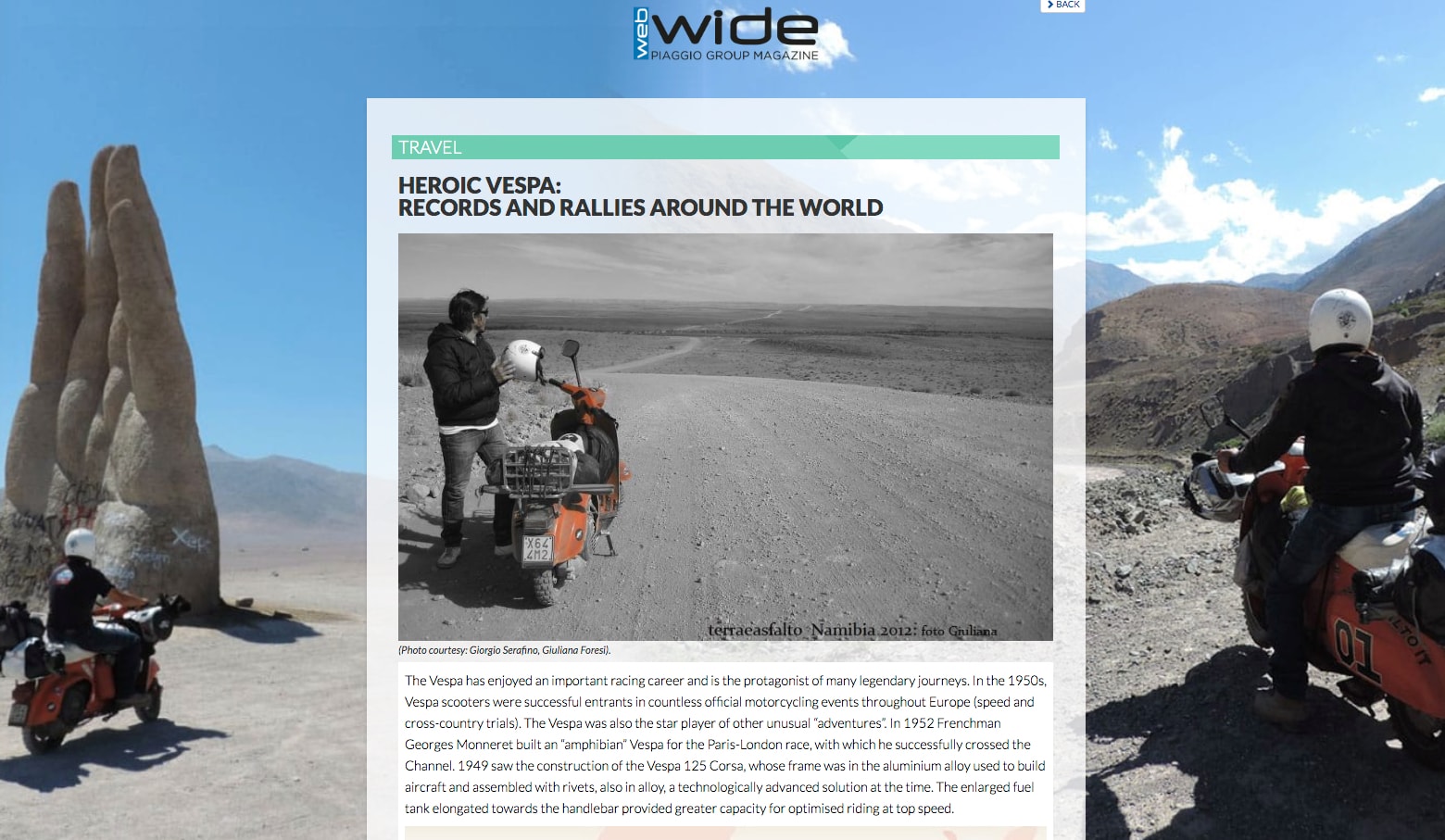