ETTORE GAMBIOLI: THE ARTIST/GUZZISTA WITH THE EAGLE IN HIS HEART

FOR TWENTY YEARS HE HAS PAINTED THE BIKES FROM MANDELLO. ALSO A SCULPTOR, HE HAS CREATED MONUMENTS IN CARRARA MARBLE DEDICATED TO CARLO GUZZI, SYMBOL OF THE CITY OF MANDELLO DEL LARIO. ONE OF HIS ARTISTIC PRINTS FOR THE INTERNATIONAL CENTENNIAL RALLY (8-11 SEPTEMBER 2022) ON THE OCCASION OF THE GUZZI WORLD DAYS. DUAL PASSION - ART AND MOTO GUZZI - INHERITED FROM HIS FATHER PAOLO.

Italy, July 2022 – His name is carved in marble, the Carrara marble used to create the statue dedicated to Carlo Guzzi (co-founder of Moto Guzzi along with Giorgio Parodi), symbol of the city of Mandello, home of the bikes that have been manufactured here from its foundation in 1921, for more than one hundred years. The statue is a must-see destination for all Guzzisti who arrive on the Mondello del Lario banks from all over the world. The sculptor is Ettore Gambioli, artist, painter, Marche native, and Guzzista by family tradition. And Wide interviewed him.

Monument to Carlo Guzzi in the Mandello del Lario Municipal Square, unveiled in 2011 on the occasion of Moto Guzzi's 90-year anniversary. The sculptor is Ettore Gambioli.

ETTORE, HOW DID YOUR PASSION FOR ART BEGIN?
“I was born and raised in Cagli and from the time I was small, I was considered by my friends, schoolmates, and teachers to be a child with an extremely clear natural talent for drawing and my personality formed around this knowledge. I enjoyed drawing and did it constantly, so I might say that I always believed that I would work in an occupation closely tied to art. In my family, my father Paolo, a talented painter, followed me with satisfaction and attention.”

Works by Ettore Gambioli; photo courtesy of the author. From the left: Moto Guzzi 8-Cylinder Colnago; 8 Cylinders at the Tourist Trophy; dedicated to the rider Abbondio “Bundi” Sciaresa.

AND WHAT ABOUT FOR MOTO GUZZI?
“My passion for Moto Guzzi was kindled when my father purchased a new California II in 1982. I fondly remember when we would look at the brochure of the bike in the evening before going to bed while impatiently waiting for it to arrive. As an adolescent, I was attracted to more youthful and sporty bikes, but I still looked at Moto Guzzi affectionately. I felt like there was a ‘thread’ that connected me. Then, at 18 years of age, when I began using the California, my passion grew until becoming what it is now. Over the years, I also purchased a Vespa 125 PX which I have kept and still use along with the other Vespa 50 inherited from my grandfather. I consider the Vespa to be true anti-stress therapy and I find taking long trips on her to be great fun.”

WHEN DID THE EAGLE BRAND BIKES “CROSS PATHS” WITH YOUR ART?
“I’ve been painting Moto Guzzis since 2002. In that period I had already opened my business and, compared to the previous years when I had attended Art School first and then the Fine Arts Academy (both in Urbino), I realised that I was drawing less frequently, so in order not to get out of practise, I started painting and my choice of subjects fell to Guzzis. ‘If I have to paint something,’ I told myself, ‘It’s best to paint something I like’...”

Works by Ettore Gambioli; photo courtesy of the author. From the left: Griso; V85 TT; MGX-21.

The Guzzis of G. “V85 TT”. How one of Ettore Gambioli’s works is born – Official video clip:

THE MONUMENT TO CARLO GUZZI IS ONE OF YOUR BEST-KNOWN WORKS. HOW DID THE PROJECT COME ABOUT?
“I was commissioned to do the monument to Carlo Guzzi by the Associazione Anima Guzzisti (Guzzisti Soul Association) and then the Mandello Municipality handled erecting the work and completing the pavement around the sculpture. It took me about 5 months to complete it and I still remember the particular hardness of the Carrara Marble I used. In any case, it was an extremely stimulating experience - a waking dream. I felt all the expectations and the responsibility of this effort, but it didn’t frighten me. To the contrary, it pushed me to give my all. The same situation arose again in 2021 when I created the statue of Giorgio Parodi in Genoa, the brand’s other founding father.”

Unveiling of the monument to Carlo Guzzi (Mandello del Lario, 2011), created by Ettore Gambioli; photo courtesy of the author.

WHERE DO YOU EXHIBIT YOUR WORKS?
“I’ve exhibited in Mandello several times, in 2005, 2006, and 2017; then in Gubbio, Senigallia, and Rieti in 2018 on the occasion of the Moto Guzzi World Club event and, last but not least, in my hometown of Cagli a couple of times. And, of course, I would like to exhibit in the Piaggio Museum in Pontedera, which has a section dedicated to vintage Moto Guzzis.”

Ettore Gambioli’s exhibitions, from Mandello to Cagli. Images courtesy of the author.

AS A GUZZISTA, YOU ARE ALSO ACTIVE IN RALLIES...
“Just recently, in June, we organised ‘Guzzisti in Cagli-1st bike meeting’, and it was an unexpected success. It was also a chance to get to know various people from the Facebook group (that I founded and admin) called ‘Il Divin Guzzista’ which, in just over one year, already has almost 6,000 members.”

1st Bike Meeting “Guzzisti in Cagli”, with an exhibition of Ettore Gambioli’s works at Palazzo Felici. Images courtesy of the author.

YOUR SECRET DREAM?
“My dream, which I have been chasing for many years, is to collaborate in some way with a Moto Guzzi design, maybe even for something very simple.”
Never say never, Ettore! 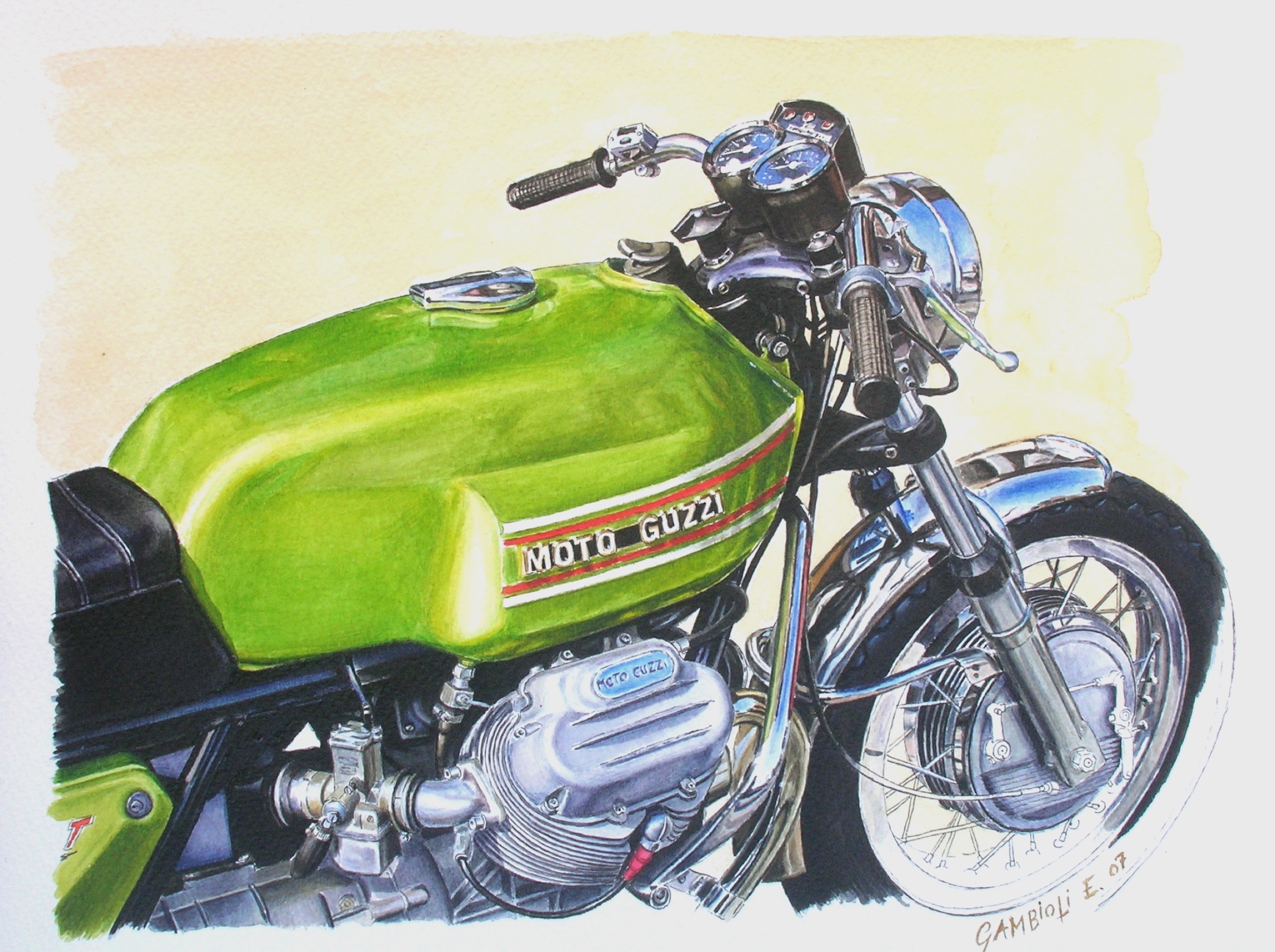 FOCUS ON ETTORE GAMBIOLI. A graduate of the Urbino State Art Institute (book school) in the engraving techniques section. A graduate with top marks from the Urbino Academy of Fine Arts in the Sculpting section. Topic of his dissertation: “Sculpture restoration”. Exhibitions and collaborations as painter-illustrator. Winner of the 1998 Marche Award, invited to the subsequent national edition. Participation by invitation in numerous collective exhibitions. Various personal exhibitions in several Italian towns (Cagli, Ancona, Gubbio, Mandello del Lario, Senigallia, Rieti, etc.). Collaboration as illustrator with the periodicals “Bicilindrica – La Rivista dei Guzzisti” (from 2004) and “Scirocco” Illustrations of the children’s book “Se c’era una volta c’è ancora”. Illustrations for the Moto Guzzi 1921-2021 book. He has numerous restorations to his credit for prestigious patrons, as well as new works (crests, sculptures, statues, portals, decorations…), not to mention public monuments: in addition to those already mentioned, dedicated to the founders of Moto Guzzi, works range from the monument created for the Spokane public park (in the state of Washington, United States). His artistic production with Moto Guzzi subjects includes about 70 works, including watercolours on paper and limestone sculptures. 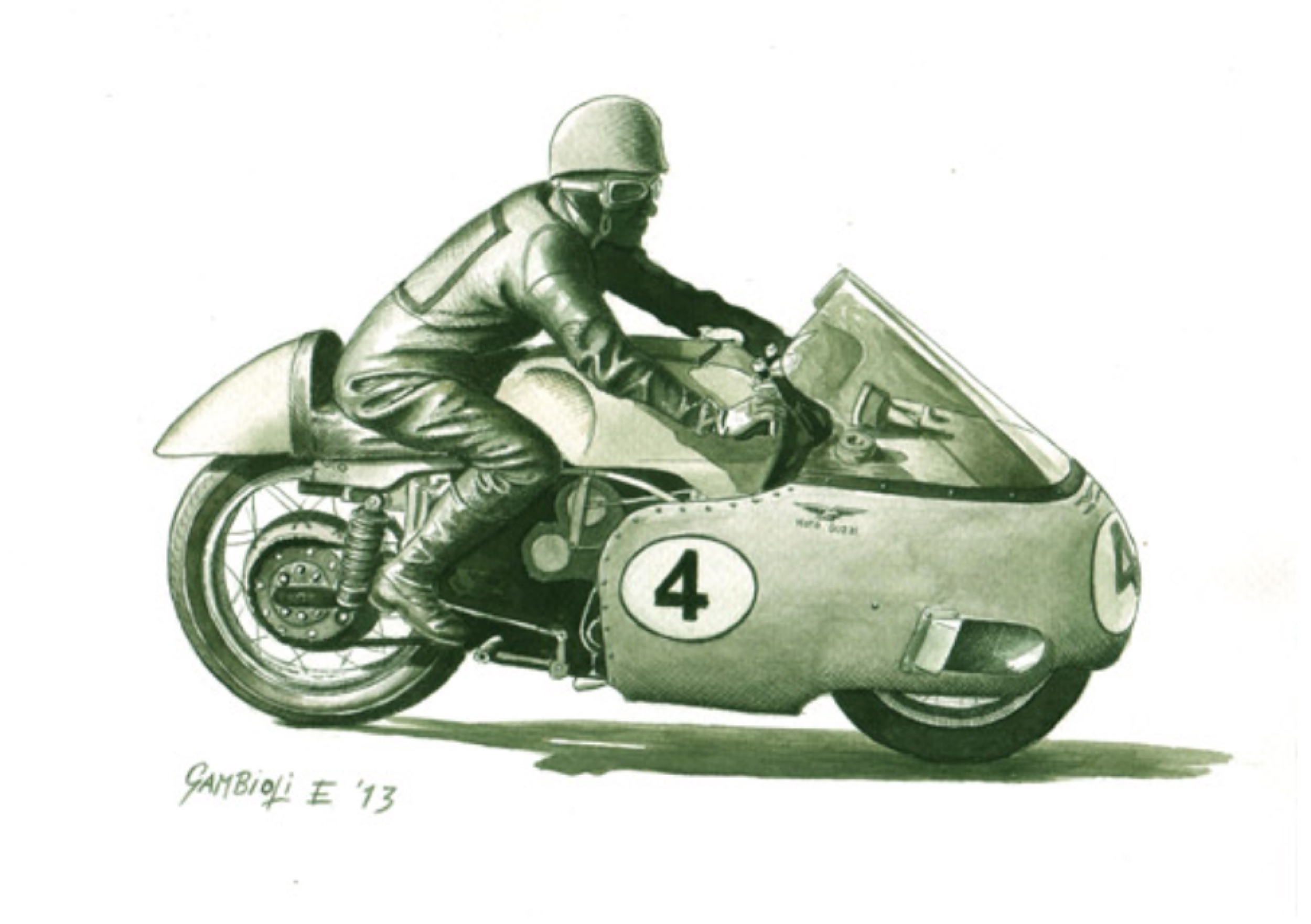