FABIO MAESTRUCCI: “TUAREG PASSION: FROM THE WIND TO THE 660.”

February 2022 – We received this message: “I’d like to share with you my loyalty to the Aprilia brand. After 33 years, another Tuareg joins one of the company’s most iconic bikes. I am certain that the new Tuareg 660 will gain great global popularity and I hope that it will provide as much excitement and satisfaction as the Tuareg Wind has given me. I am attaching a photo taken after delivery from the CeB dealership in Florence which I appreciated because of the willingness and courtesy of the staff. Kind Regards, Fabio Maestrucci, Empoli (Florence).” 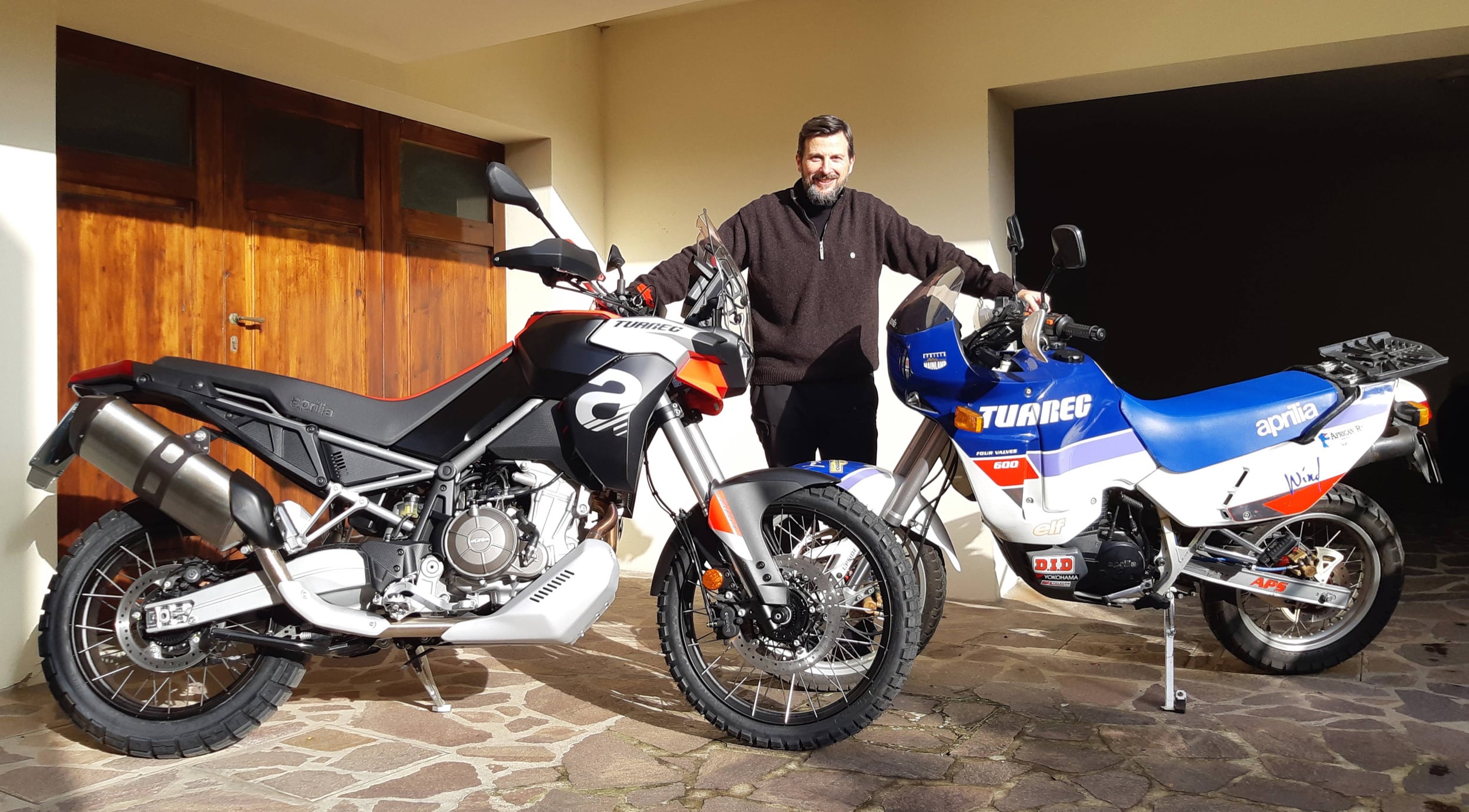 Fabio Maestrucci with his Tuaregs: on the left, the new 660 on the right, the Wind 600 (purchased 33 years go) with its iconic livery (photo by the author).

Thank you, Fabio, we replied, but we’d like to get to know you better. And so it was. The Aprilia fan agreed to share his fantastic story with Wide readers, complete with some great photos.

“TUAREG PASSION” BY FABIO MAESTRUCCI.
FOLLOWING THE APRILIA “A”.

“My name is Fabio Maestrucci and I was born 57 years ago in Empoli, a small town on the banks of the Arno that connects Florence and Pisa, running through Pontedera, where Piaggio has its headquarters. In the ’70s, being so close to the factory provided the chance to see the test riders on the streets as they tested the company’s new models. As they went by, we children, with curious eyes, yearned to discover some new detail on the motorcycles ridden by men in monochrome leathers, but they passed by quickly in orderly ranks, so all we could do in the end was go back to our dreams, admiring the photographs on the adverts. At the age of 13, like many of my peers, I was already dreaming of riding a Vespa 50 special that I could use to go to the sea and discover the world... The wait for that fateful event, however, was broken by an off-road Aprilia that completely changed my boyhood plans. The bike stood out with its significant dimensions and painstakingly designed aesthetics enhanced by a large ‘A’ that took up almost half the fire-red fuel tank. 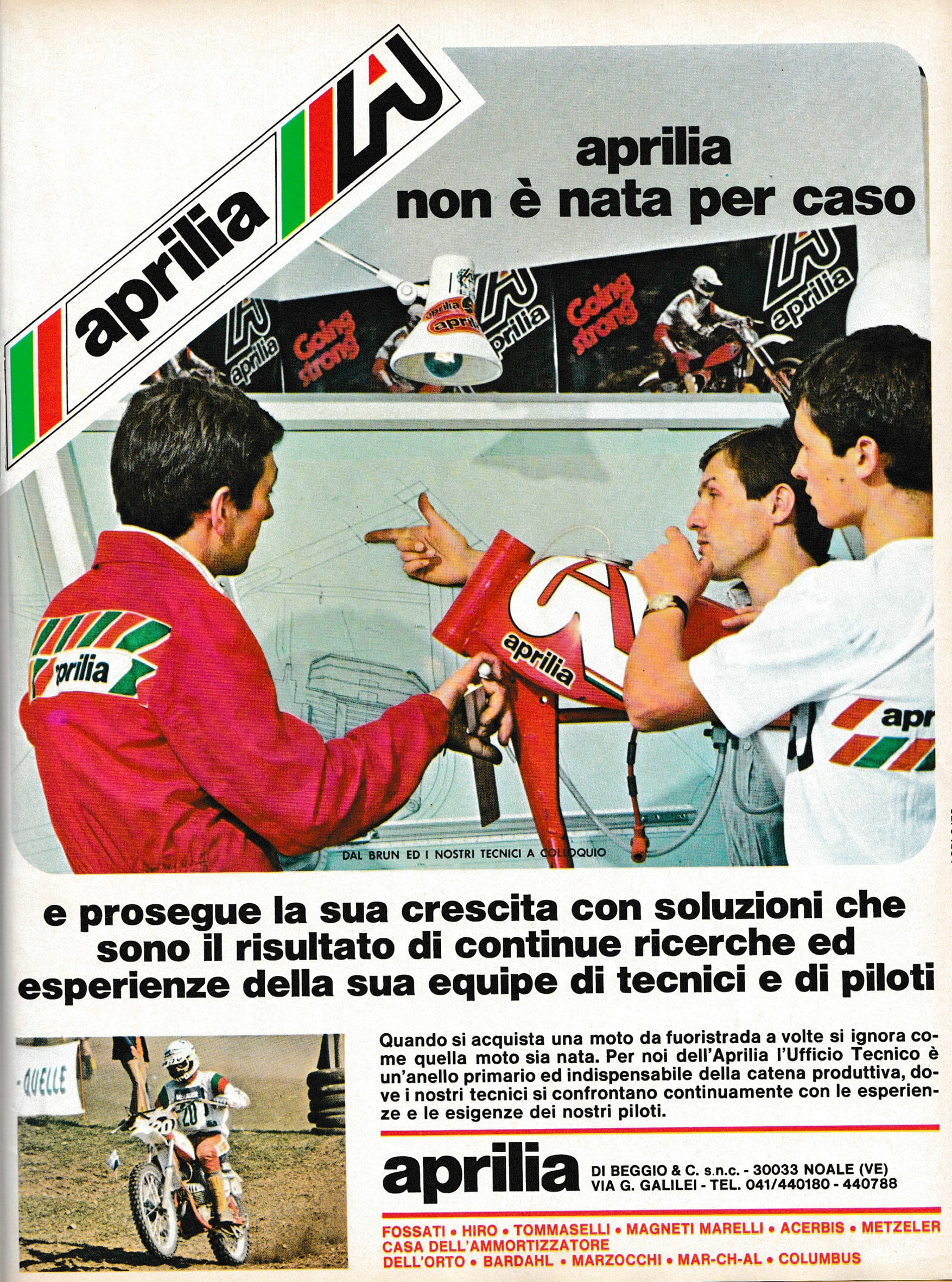 I was hypnotised by that bike, and I fantasised about the adventures I would be able to embark on with it. For my début in the motorcycling world, I found it inexplicably wise to begin precisely with the Aprilia ‘A’ and its splendid RC50 model. 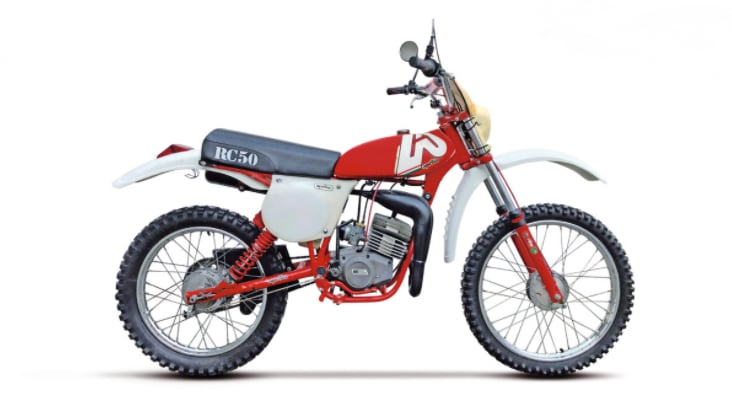 My father, however, was not of the same opinion, so I made my two-wheeler début took place on the Aspes ‘A’, with the Navaho 50 cs model, purchased second-hand, which quickly stimulated the competitive adrenaline in me. In fact, intoxicated by the albeit brief experience of a ‘tuned’ engine, the move to a 125 was inevitable. So, at the age of 16, I finally hoped to be able to ride an Aprilia like the ones that won in motocross races with riders Alborghetti and Maddii. The joy of a new bike was partially veiled by the arrival of a bike with the letter ‘A’, but once again, not the Aprilia ‘A’, but that of a red Ancillotti with which I began to frequent some small motocross tracks. 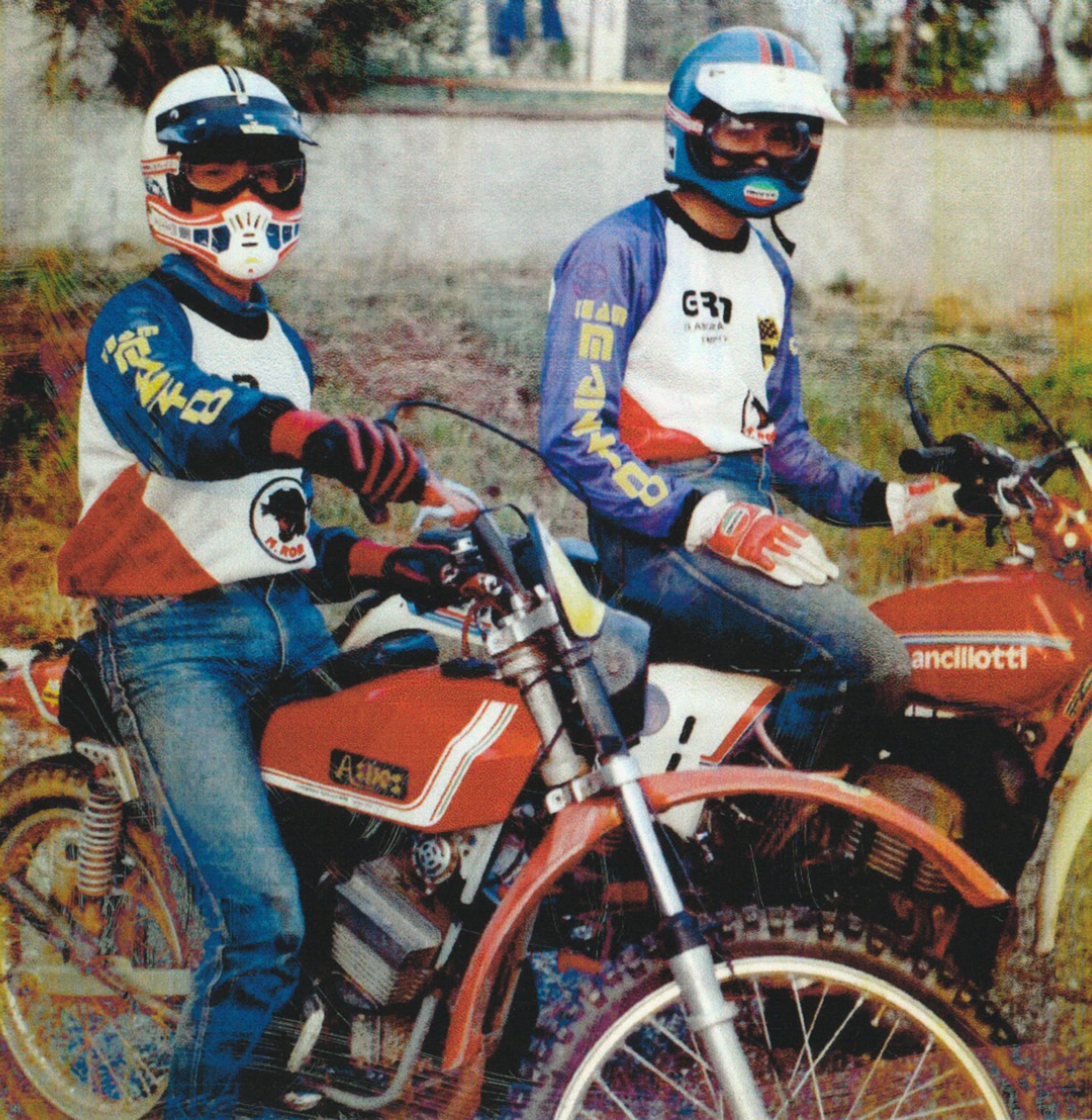 Sixteen-year-old Fabio and the first motocross races. On the right in the photo astride an Ancillotti bike. Photo by Fabio Maestrucci.

Once I had turned 18, free of any family restrictions, I also fulfilled my wish of competition riding. I looked for an Aprilia straight away, but the new models were unfortunately not in my budget and there were no used units to be found. I settled for a second-hand Villa 250 mx1, but right after my race début, I was called up for military service. 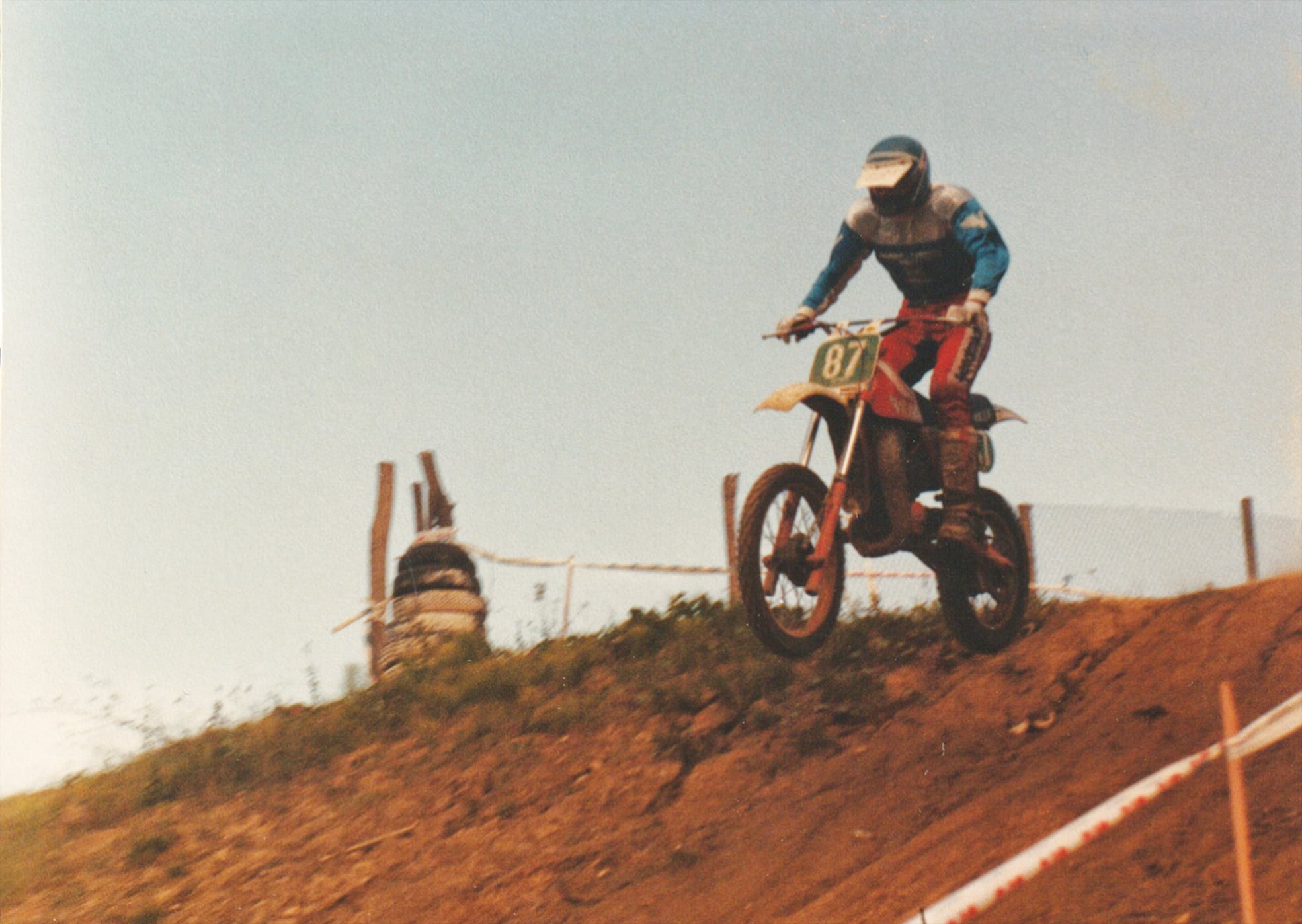 Eighteen-year-old Fabio racing on a Villa 250. Photo by Fabio Maestrucci.

In that period, the Paris-Dakar rally, most difficult and fascinating motoring race in the world, had just celebrated its tenth edition and gained global notoriety, thanks to the interest of the press all over the world and the participation of the largest motorcycle manufacturers. I obviously continued keenly following everything Aprilia manufactured, and 1985, the company introduced a model called Tuareg, a name preferred to that of Sahara, with which some Pharaohs participated in the rally (rider Beppe Gualini). And so, four years later in 1989, the début took place in the most demanding race on African soil, with two bikes ridden by Balestrieri and Zanichelli. The final result (20th place) was encouraging, and Aprilia immediately began producing a bike that replicated the vehicles that had raced in the Dakar. 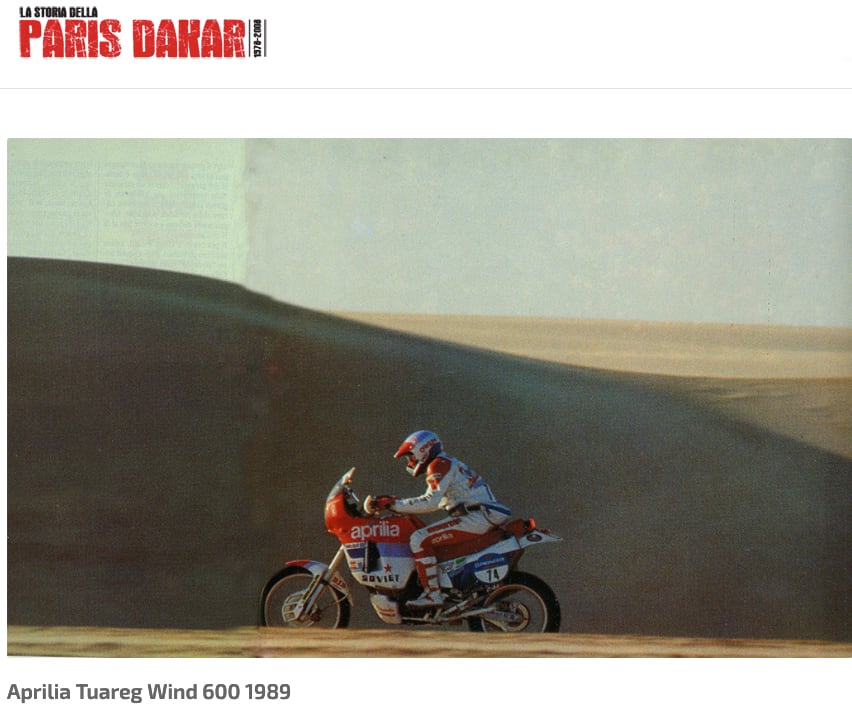 I remember seeing it for the first time in the weekly periodical Motosprint and it was love at first sight. The bike was powered by the dependable 560 Rotax engine, entirely concealed by an enormous 18 litre tank. The vehicle was fitted with side panels that simulated the supplementary fuel reserves, upside-down fork, double brake disc at the front (for the first time on a single-cylinder) and a full range of features that only Aprilia offered. The harmonious design of the fairings was enhanced by a beautiful blue-red-white colour scheme. In March of that year, I finally fulfilled my wish of riding an Aprilia, purchasing a spectacular Tuareg Wind 600. I immediately appreciated the low weight of the single-cylinder engine and the multifunctional capabilities of the vehicle, as agile on the motorway as it was on a mule trail. There was no trail that could stop it short of the fear of ruining such great beauty.

IN THE DAKAR DESERT WITH THE WIND 600. 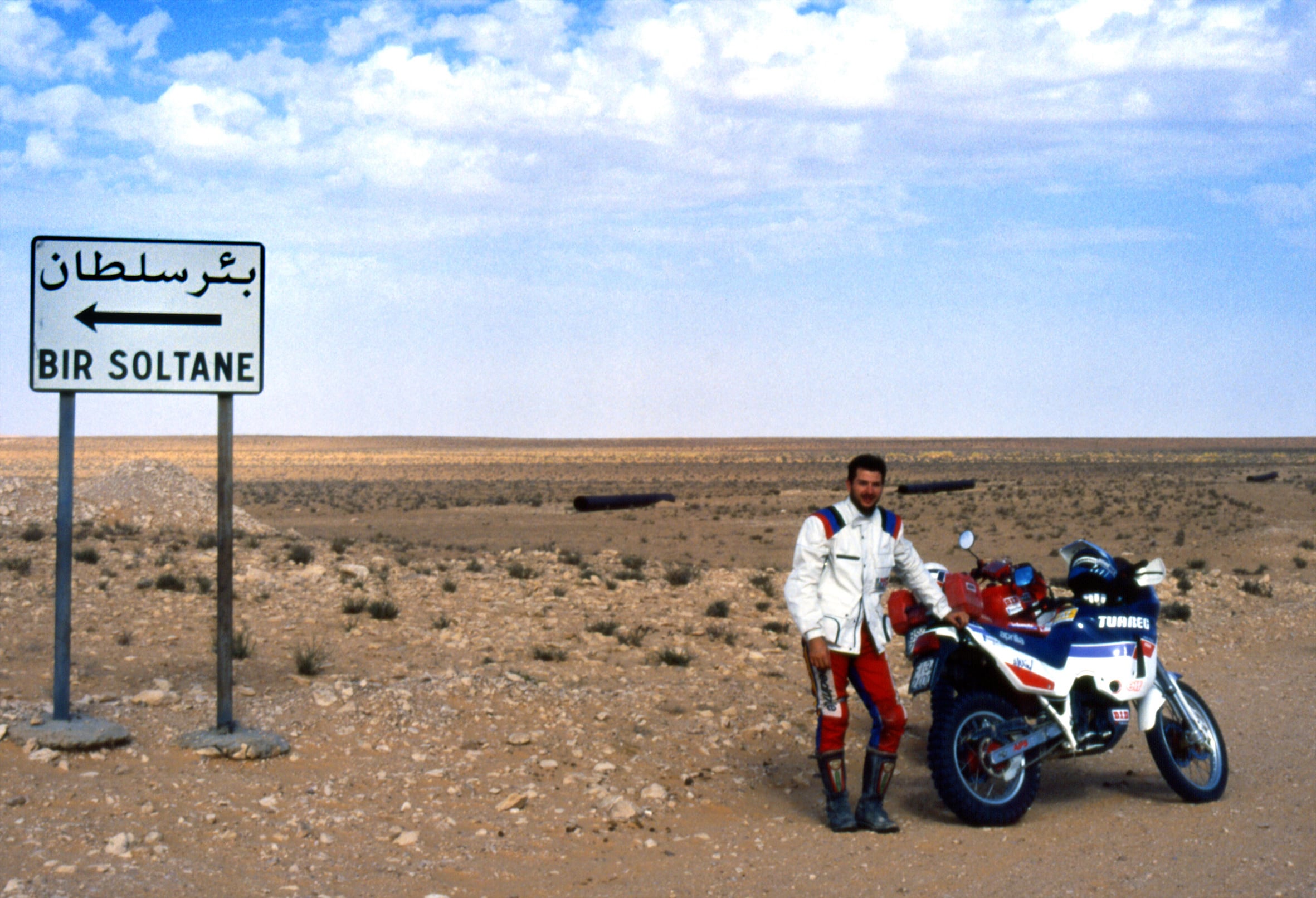 The ’80s. Fabio and his Aprilia Tuareg Wind 600. Ride in the Tunisian desert. Photo by Fabio Maestrucci.

After noting and appreciating these qualities, I decided to emulate the Dakar riders, taking the Tuareg to its natural habitat - the desert. A few friends and I embarked on a journey to Tunisia, and I can still recall the excitement of those first miles towards what was considered in those days to be the great unknown. The meeting with Africa was exhilarating and the Tuareg proved immediately to be suited to this territory. Only the lack of experience riding on the sand and the much-feared fech-fech created embarrassing situations on several occasions. [Editor’s note: fech-fech is a common phenomenon in the desert consisting in clay dust and limestone deposits under the surface that make it dangerous for vehicles, animals, and people to cross over without sinking.] 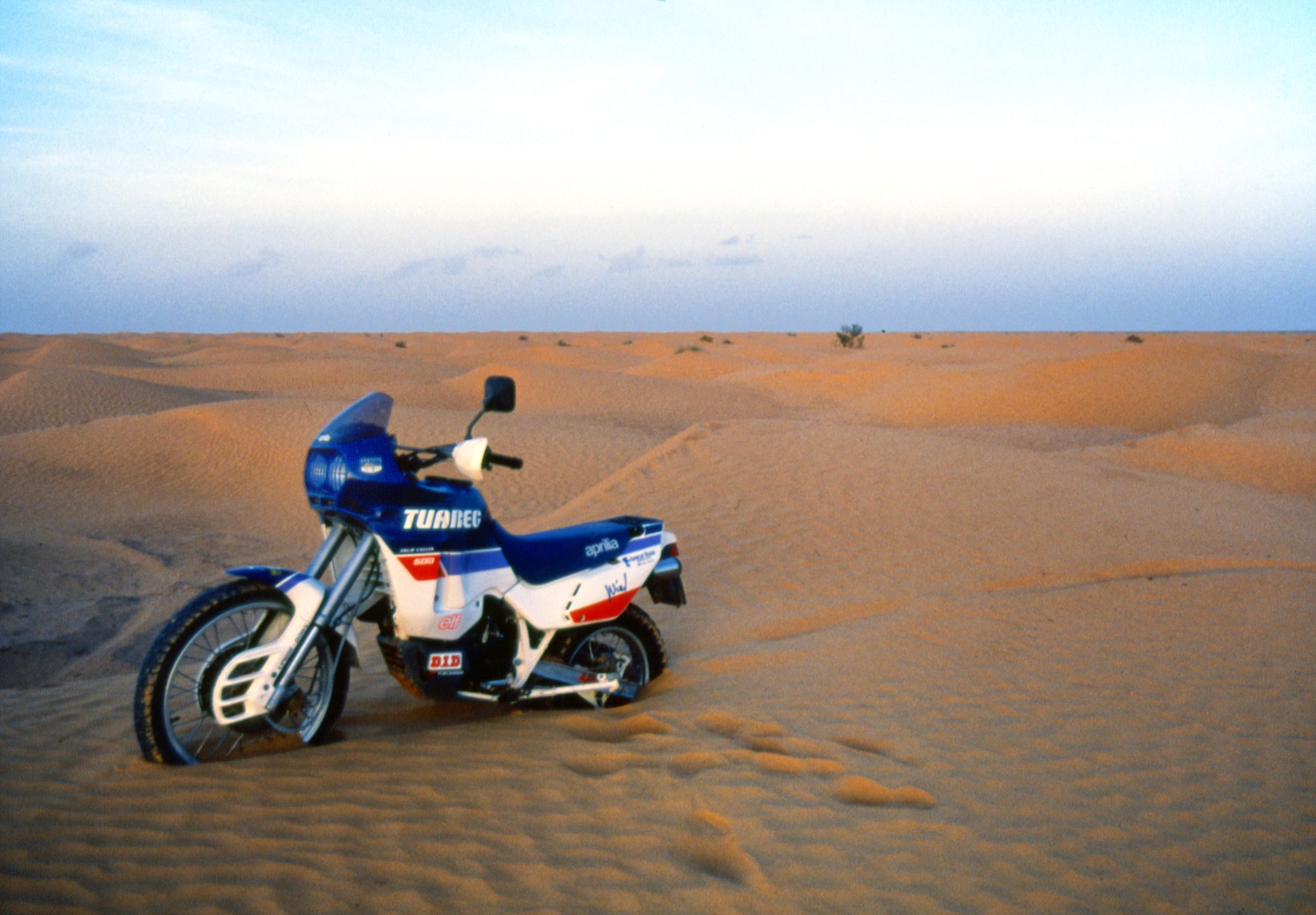 Despite a brief but intense itinerary, that trip was forever destined to change some aspects of my life. In fact, once back in Italy, I began studying the desert environment, its past and the vestiges that mankind left in this surreal environment thousands of years ago. Among the most representative elements of the ancient Neolithic Saharan community are countless incisions on the rock which represent fauna that has long since disappeared, and refined paintings of daily life reproduced in caves or out on the open plains, fragmented by the wind and sun. 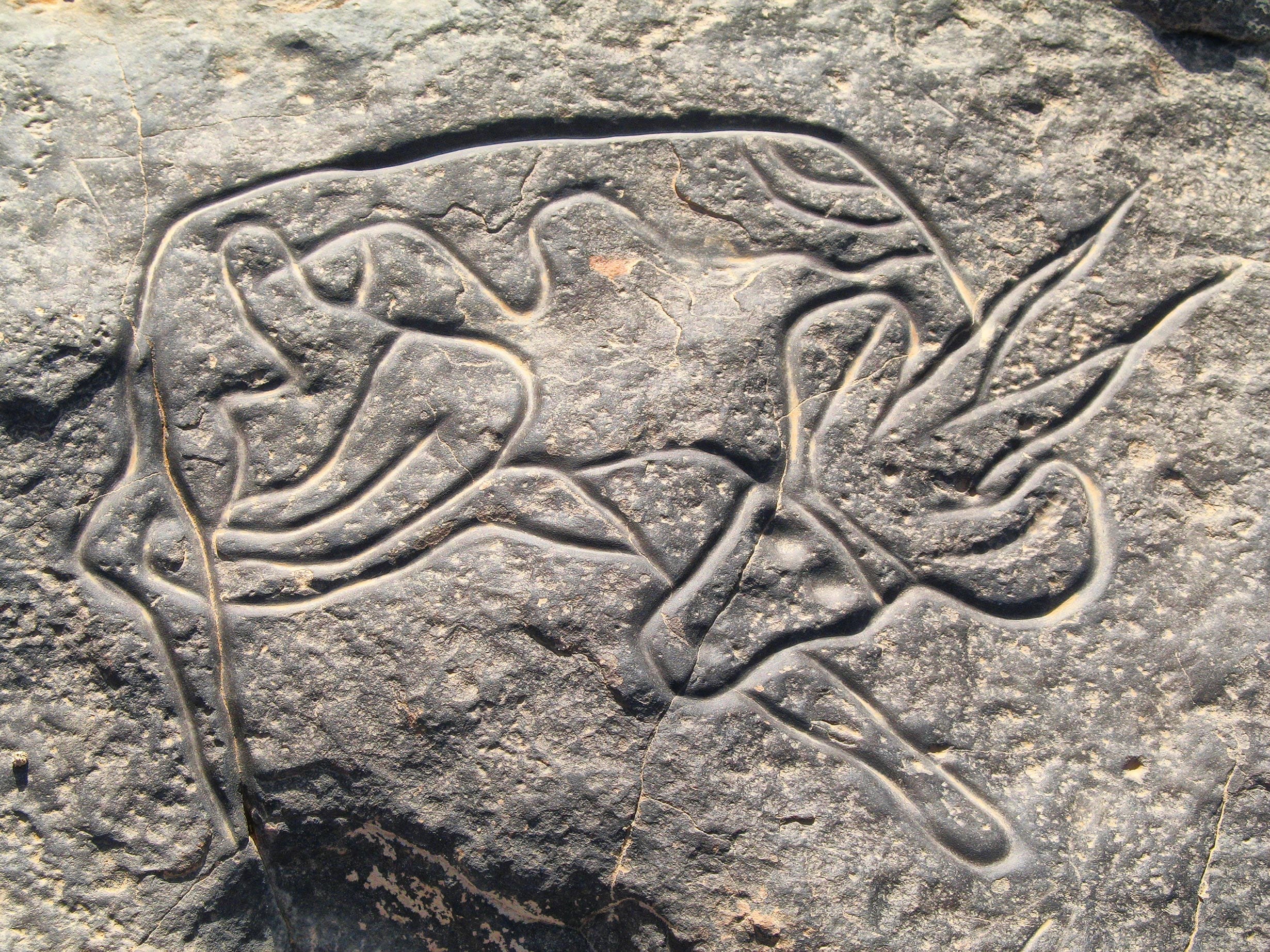 Incisions on the rock. Photo by Fabio Maestrucci.

TRAVELLING WITH THE TUAREG PEOPLE.

Over the years, the search, cataloguing, and study of these prehistoric testaments inevitably led me to travel alongside the Tuareg, the ‘Imohag’, free men, or Kel Tamesheq, those who speak Tamasheq, as they are generically called.

Photo by Fabio Maestrucci: 25 years of journeys in the Sahara.

Living together with them in the Essuf - a term that designates the emptiness and the spirits that dwell there - is a profound experience that provides clarity in terms of the value placed on objects, but also an important lesson to learn, respect, and protect the resources of a fragile and continuously changing nature. In more than 25 years of travels (…), I have visited many locations on the Sahara, from Mauritania to Egypt, experiencing intense and once-in-a-lifetime moments. 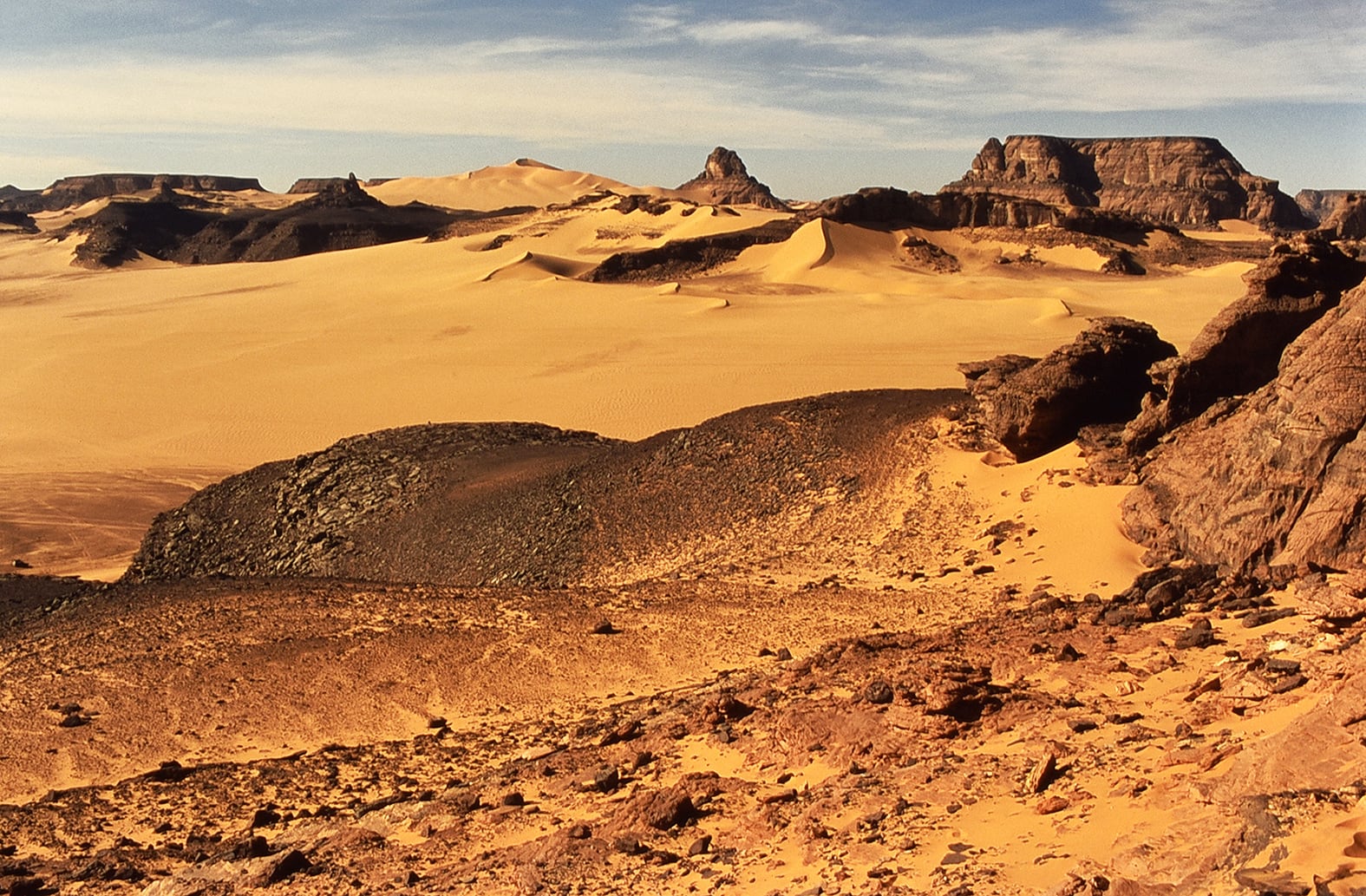 So, over time, alongside I have brought archaeological research my profession in the telecommunications field, with studies and essays that have appeared in numerous publications in Italy and abroad. In the little free time available, my dear Tuareg Wind continued to accompany me in the discovery of many places… and in 2012 the as yet perfect condition of the bike was certified by registration in the Federazione Motociclistica Italiana (Italian Motorcycling Federation) historic registry. 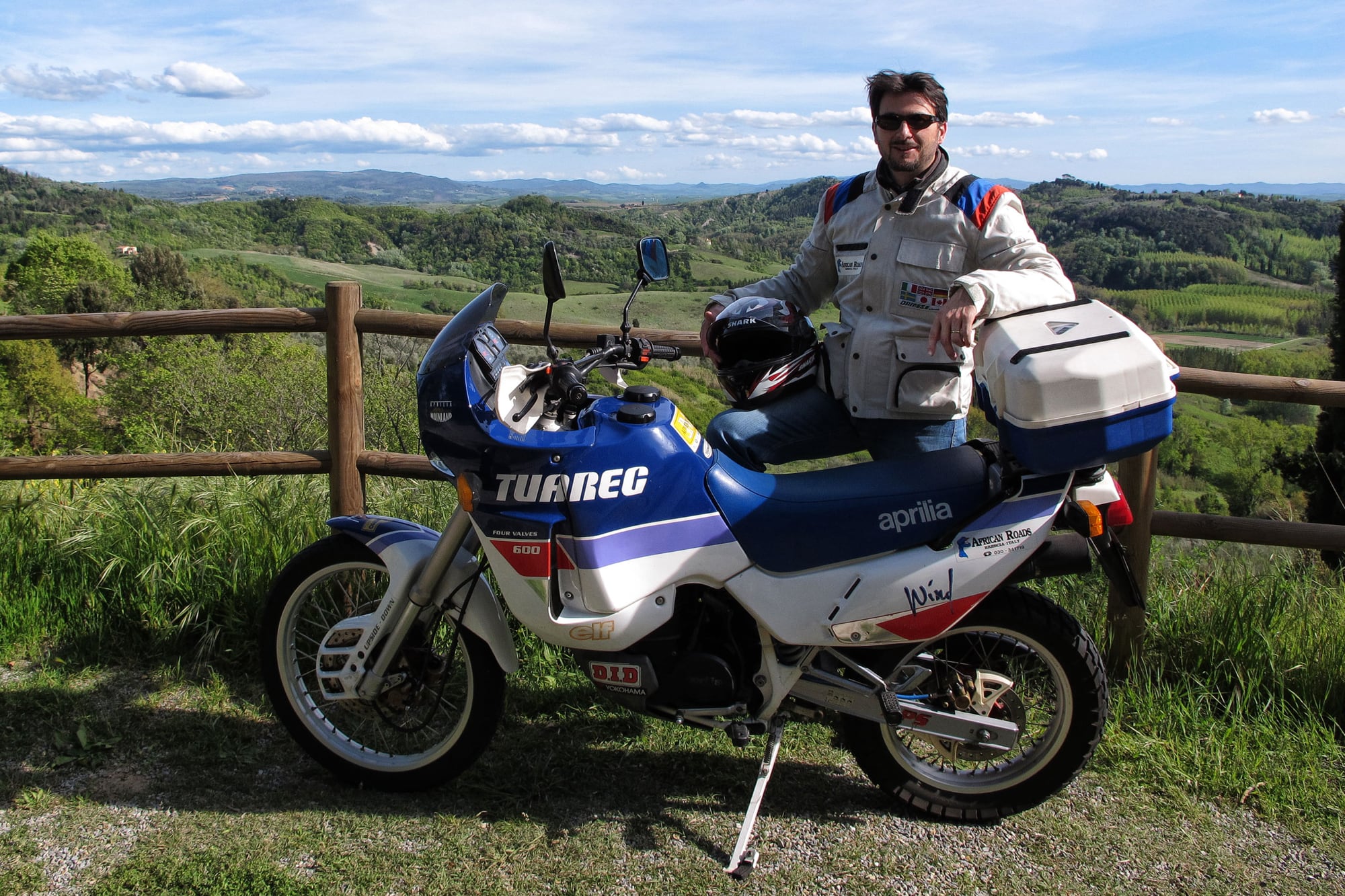 A few years ago, when I heard the first rumours about a possible new edition of the Tuareg model, I experienced an electrifying sensation of approval and curiosity. I have always remained a great fan of the brand and I followed all of its sporting efforts and challenges from trial to enduro, from supermotard to track racing. I always hoped that Aprilia would have needed that long wait to once again see the name Tuareg on the roads of the world to create a model that raises the bar technically and not just a restyling operation or a commemorative bike for nostalgic fans.

Aprilia Tuareg 660 (source: press kit) and at the international Eicma 2021 Exhibit in Milan.

The new Tuareg had to be a modern interpretation of the positive characteristics that distinguished the Tuareg Wind, a symbol of the company that won the hearts of many fans. The first images of the bike, which came out in August 2021, in the iconic Tagelmust colour scheme were thrilling. The project and the technical features enhanced by up-to-date electronics immediately placed the Aprilia Tuareg 660 in the limelight of the global motorcycling stage.

I just had to try it out, so I booked an appointment for a test ride on the Aprilia website. The day of the test, I was as excited as a kid and it only took a few moments to discover an impressive agility and smooth engine, thanks to advanced electronics capable of changing the character of the vehicle quickly, based on the need. 33 years later, I decided that the thrills I felt during the test couldn’t end on that day, so I purchased another fantastic Tuareg, in the sombre but aggressive Martian Red colour scheme.

The only ‘problem’ is that it isn’t easy to remain meditative on this bike, and the imagination wanders to vast African trails or unexplored Arabian deserts. However, Tuareg is not just synonymous with sand and wide open spaces. It is also a term that intimately connects the individual with nature, whether around the corner from home or in the most remote regions of the world. Destinations and thoughts intertwine uninhibited astride an Aprilia! In closing, allow me to remember the figure of a unique person, a great man, the engineer, the entrepreneur, the enthusiast, the dreamer, Ivano Beggio, who led Aprilia to conquering 54 world titles in a short period of time to become an industrial organisation unique in its kind. Last, but not least, I wish to express my gratitude to all the women and men who, in various roles and at various times, have provided continuity to a thrilling and proud Italian heritage.”
Our heartfelt thanks to Fabio Maestrucci: a true Aprilia biker. 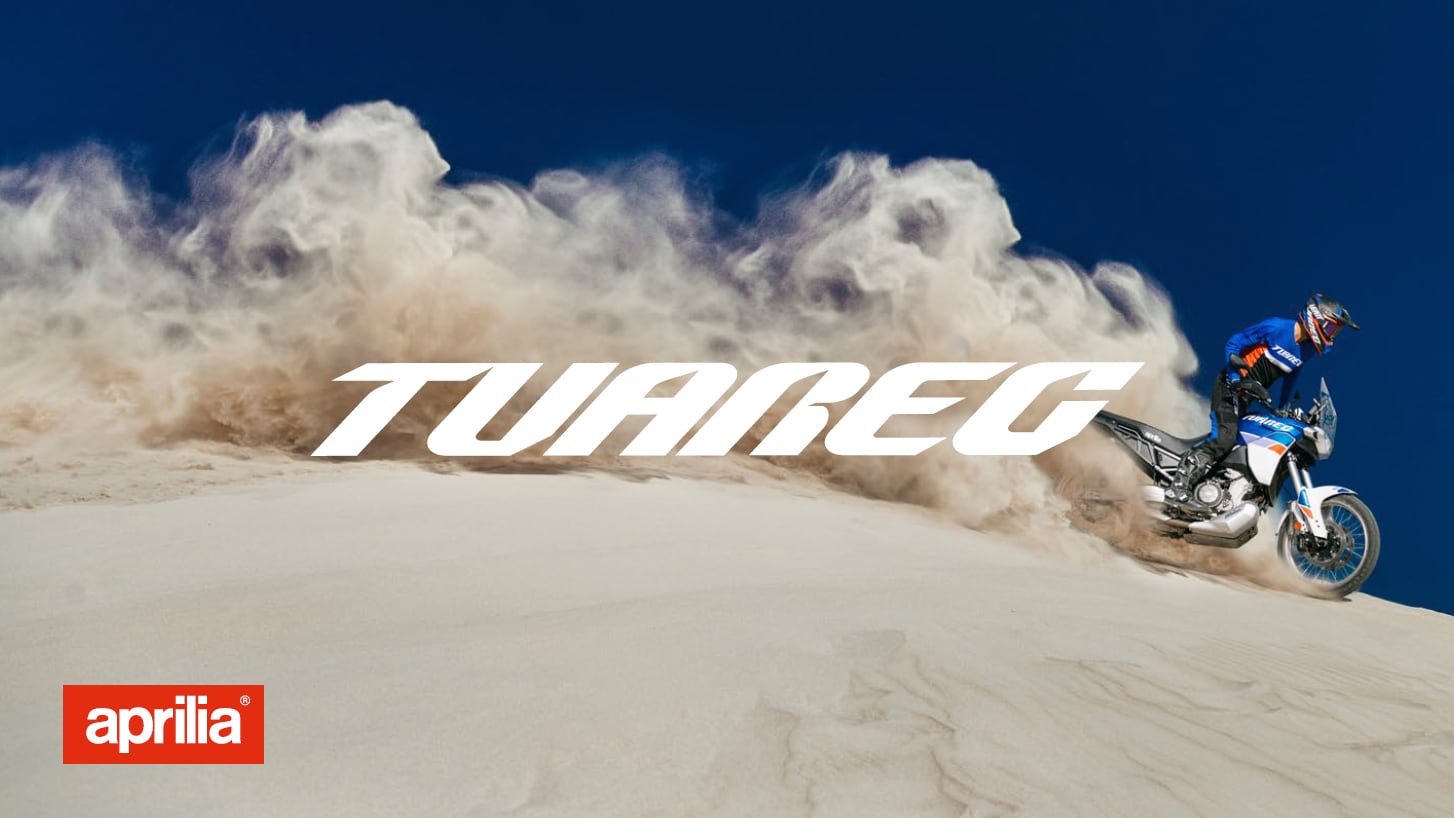