INTERVIEW WITH JOSH ROGERS, PRESIDENT OF THE VESPA CLUB OF AMERICA: A GROWING COMMUNITY WITH MORE THAN 30 CLUBS AND THOUSANDS OF FANS 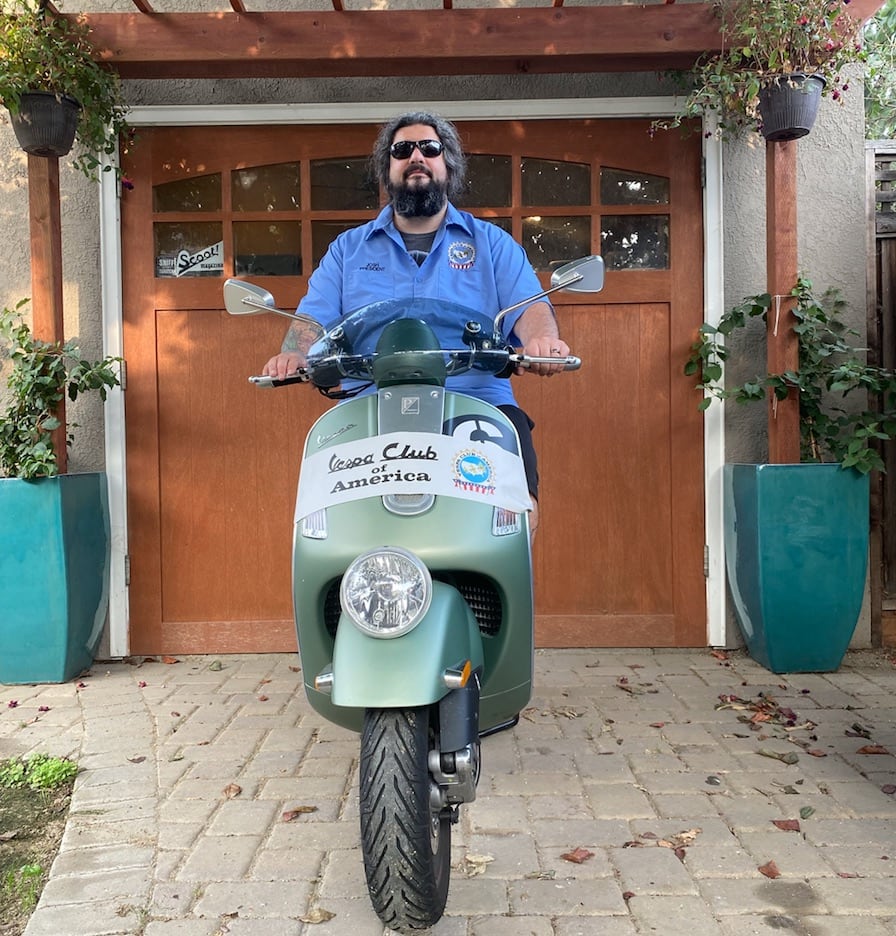 A HUGE VESPA ENTHUSIAST, THE FIRST TIME HE SAW ONE WAS IN CHICAGO 30 YEARS AGO AND NOW HE BOASTS A PRIZED COLLECTION THAT INCLUDES A RARE, 1946 VESPA 98. FORMER PUBLISHER OF “SCOOT! MAGAZINE”, HE TALKS ABOUT HOW RIDING CULTURE HAS CHANGED OVER THE YEARS. AND ABOUT THE ICONIC VESPA, HE SAYS THAT... 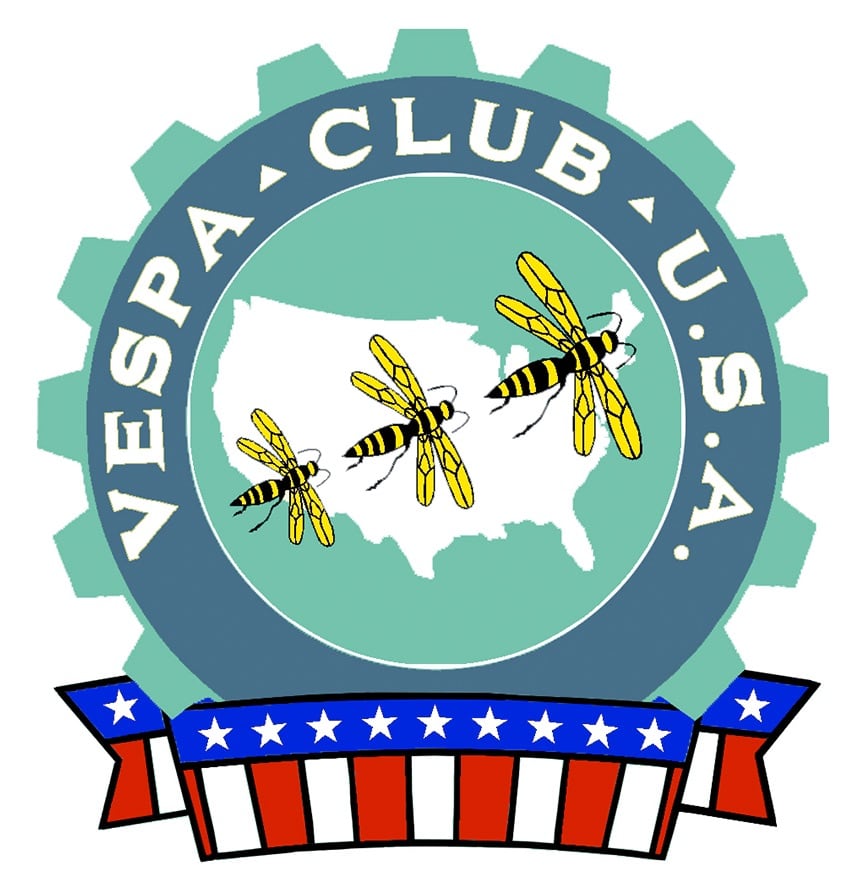 “Vespa Club of America (VCOA) was formed as a club in 1992 for scooterists. While most of the members own and ride Vespa, VCOA recognizes the diversity of scooters and their owners. We are an American scooter community. Mission: VCOA promotes the interests of Vespa and scooter enthusiasts in the USA.”
Source: www.facebook.com/VespaClubUSA

September 2020 – In early September, the editorial staff of Wide magazine received the following E-mail from San Jose, CA, through Piaggio Group Americas, the Piaggio Group subsidiary in the United States. It was from Josh Rogers, President of the Vespa Club of America, VCOA (the national association that includes more than 30 clubs and which, in turn, is part of the Vespa World Club). Josh, who is VCOA president for 4 years, writes: “It’s fantastic to read news from the United States published on Wide, and I’ll keep you up to date on our upcoming initiatives and events. Every month, we send a newsletter out to the more than 1,000 members of our Vespa Clubs (editor’s note: but enthusiasts are estimated to be at least 30 thousand)”. Josh Explains: “Our FB has 13,000 followers and our Amerivespa annual rally has 6,000 followers. The club at its height had 3,500 members. A goal we are trying to get back too”. And we wish him to surpass this goal!

He continues: “In our newsletter I always highlight articles of interest and news on Vespa and Piaggio scooters published in Wide, which I think is an information tool that is a great resource here in the United States as well. I also still have a few hard copies of the previous versions of the Piaggio Group magazine, when it was printed...”. 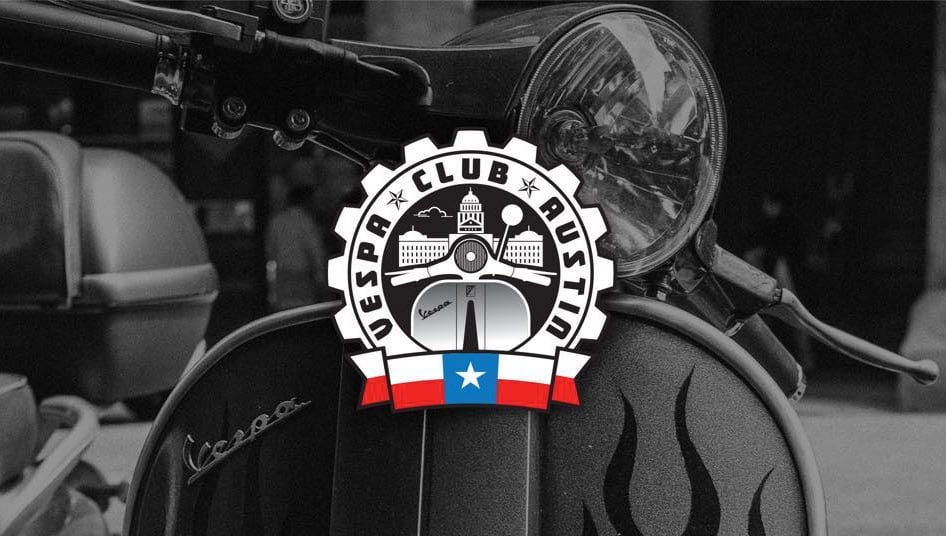 www.facebook.com/VCOATX
Josh Rogers highlights: “Vespa Club Austin, one of the new Vespa Club of America members, is doing an outstanding job promoting its team of enthusiasts. They recently organized a successful scooter ride in support of International Ladies Riding Day.” It’s a day dedicated to lady riders, but the boys are welcome too, as long as they are in the saddle... on the back!

We wish to thank Josh for his kind words about Wide magazine, the Piaggio Group house organ that has been published since 1993 and distributed in every country where the company has a presence. Since 2013, the magazine has been published in its online version and since 2017 in its multimedia form, constantly updated and available on the Piaggio Group website and on all the brand websites (also from a desktop or smartphone: wide.piaggiogroup.com/en), in Italian and in English, reaching more than 41 million readers all over the world in just three years.
Josh’s words immediately raised great “journalistic” interest, so we requested an interview to get to know him and the Vespa Club of America better. Here are his responses. 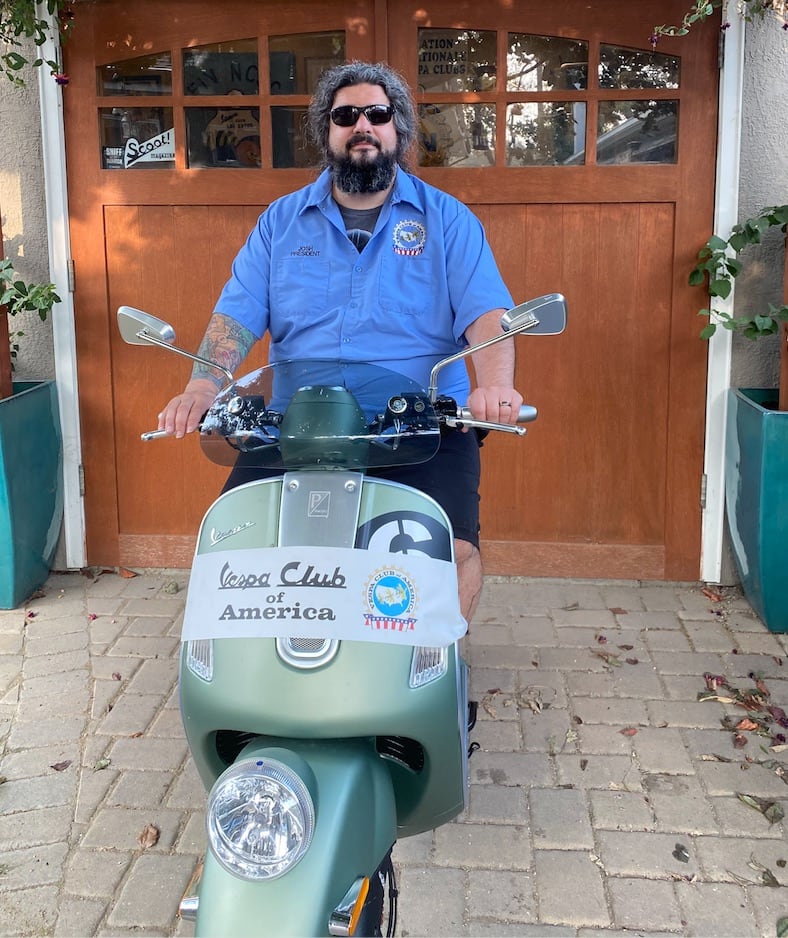 Josh Rogers, President of VCOA, on the saddle of his Vespa Sei Giorni (a special edition that picks up the mantle and carries on the fascinating story of the 1951 Vespa Sport Sei Giorni). 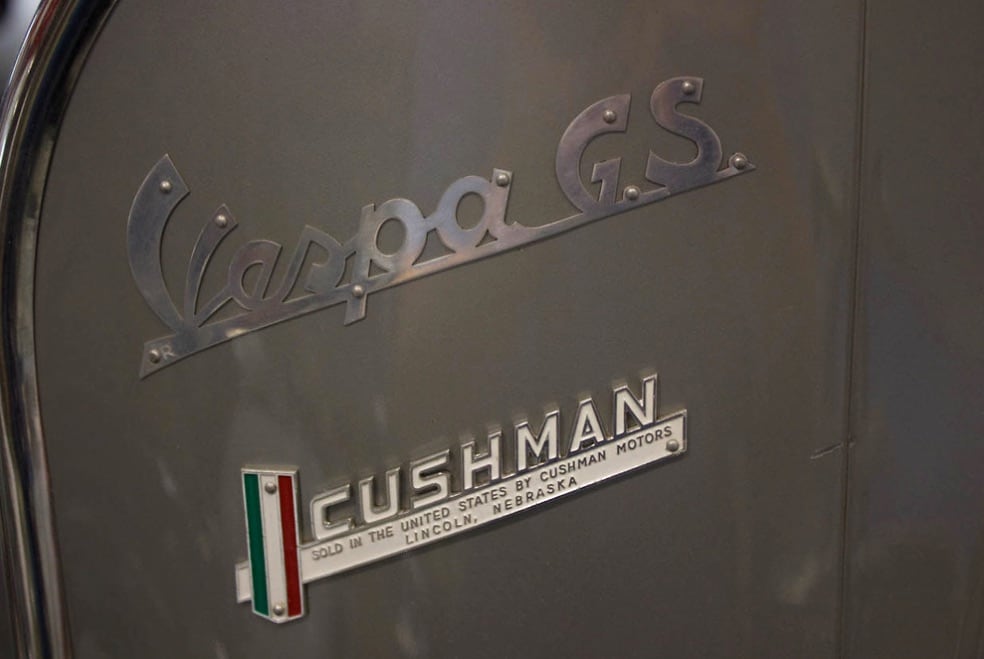 Front shield of a vintage Vespa GS (called “Vespa Cushman” by enthusiasts like Josh), which was sold in the United States by Cushman Motors of Lincoln, Nebraska. Facebook pages like this one are dedicated to the model: www.facebook.com/cushmanvespags150vs5

And a Vespa 98 registered with the Registro Storico (editor’s note: Vespa Historical Register). Thought to be the third oldest production Vespa still existing. In addition, I have 6 other scooters from 1946-2013.”

Josh Rogers’ extremely rare 1946 Vespa 98, on display in a museum in California.

WHAT IS YOUR FAVORITE MODEL?
“I don’t really have a favorite. they all have different uses. But if I had to choose, the 56 Ape. One of my first eBay purchases $1000 and I got all the parts I needed to restore it from Giorgio Notari for 5 million Lira back in the 90’s.”
Editor’s note: Giorgio Notari is a well-known Ape and Vespa Italian restorer.

HOW DO YOU THINK THE VESPA FAN COMMUNITY HAS DEVELOPED IN THE STATES IN RECENT YEARS?
“I think up until the pandemic people had started to move away from Fraternal orders and other organized groups. That aside with a brand as Iconic as Vespa I think people want to find people who also like to ride. Riding culture is a very social event even though the act of riding is a very solo adventure. Clubs come and go of course and the VCOA is here to support clubs to help them survive. If you look at Facebook people are seeking out groups even virtually to feel a sense of community and also some folks don’t really live near other Vespa owners so it’s hard. Another challenging aspect of course is getting the word out that there is this full culture of other riders. We’ve been pushing dealers to give out our membership trifold that has all the information that one would need to join the club/local club. I think too that if you are in the market for a scooter you want a Vespa Full stop. It’s the most known brand and to be honest Vespa has always had the best lines and design.” 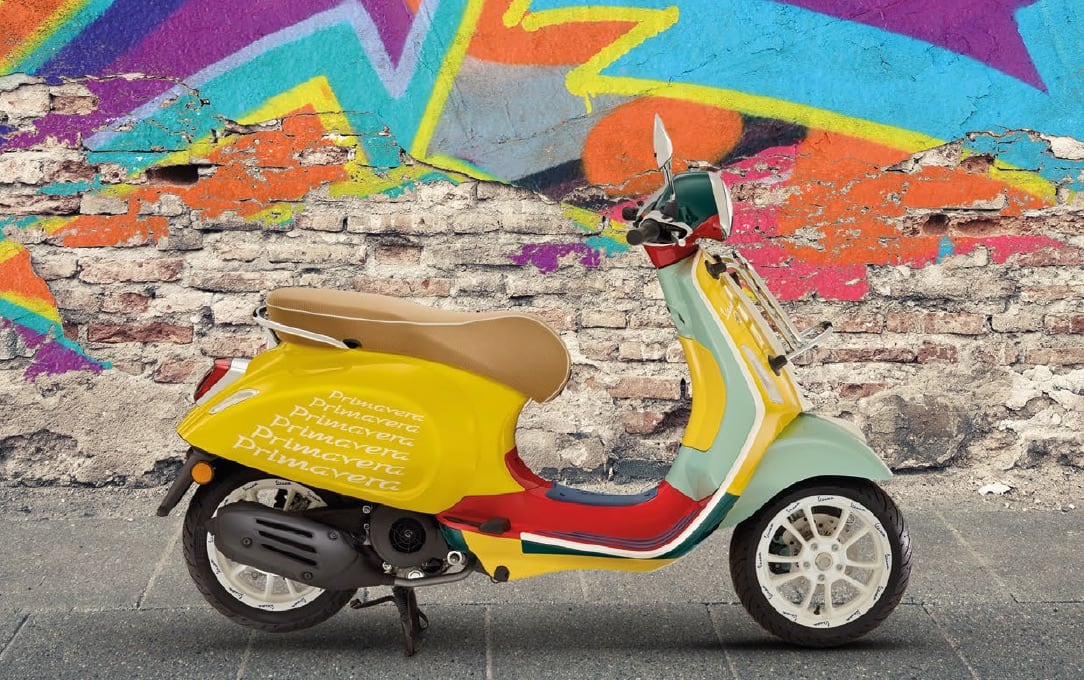 IN YOUR OPINION, HAS THE PANDEMIC BROUGHT MORE PEOPLE CLOSER TO SCOOTERS FOR INDIVIDUAL MOBILITY?
“Yes, I think sales are up as people move away from public transport. Which is interesting in the US because mostly I think of lower economic classes using public transport and of course Vespa is a luxury brand. In a City like NY where there is good public transportation all economic classes use the subway system. I also think in a time of Shelter in Place riding can be very freeing both physically and emotionally. Again, riding is natural social distancing.”

The numbers confirm Josh Rogers’ opinion: in the first six months of 2020 the Piaggio Group maintained a strong position in the North American scooter market with a share of 23.9%. The Group is also busy consolidating its presence in the motorcycle segment through the Aprilia and Moto Guzzi brands. 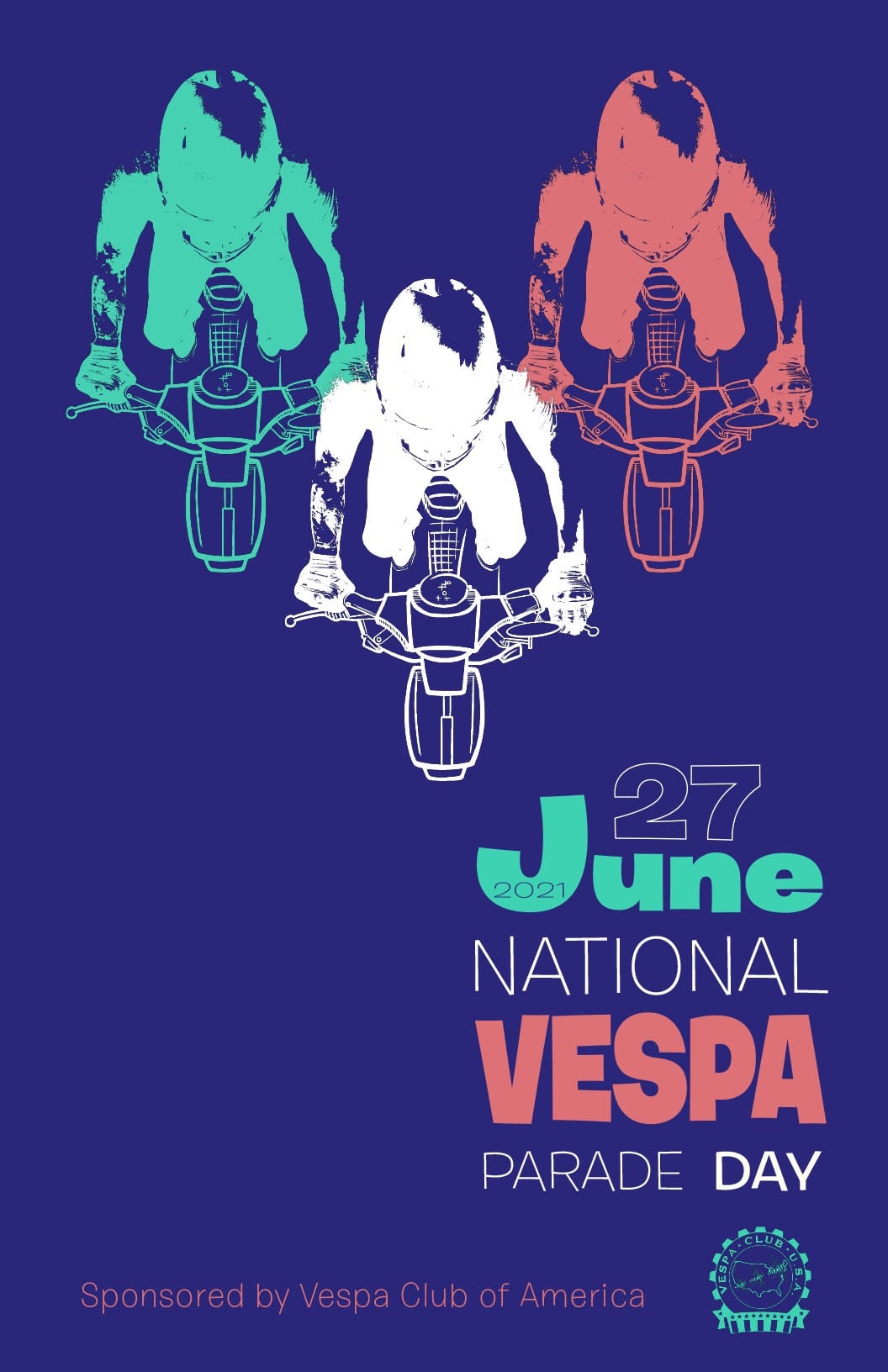 In the meantime, the Vespa Club of America has set the date for the big event - National Vespa Parade Day 2021 - on 27 June 2021, posting the official rally poster on its social media channels. “National Vespa Parade day was held in 10 cities this year 2020 – Josh explains - Which was down but mostly due to covid 19 situation”. Next year, therefore, a relaunch of the event is expected with a great participation of Vespa and scooters enthusiasts from all over the United States.
INFO: www.vespaclubofamerica.com

(In the background image, on right, of this article: home page of the Vespa Committee Washington DC: vespacommittee.org – Photo Credit: Kevin Jiannotti ).