MAX BIAGGI BECOMES A MOTOGP™ LEGEND, INDUCTED INTO THE MOTOGP™ HALL OF FAME

ON THE MUGELLO TRACK. MAX BIAGGI ASTRIDE THE APRILIA RSW 250.
APRILIA OFFICIAL VIDEO.

30 May 2022 – An unforgettable weekend for Max Biaggi: a special press conference, live streamed on MotoGp.com, along with Carmelo Ezpeleta, CEO of Dorna; a lap around the track astride his winning Aprilia 250 RSW 250 on the eve of the MotoGP Italian Grand Prix at Mugello international circuit (Italy); an avalanche of congratulations from all over the world. And the six-time World Champion, the day before, announced to his fans: 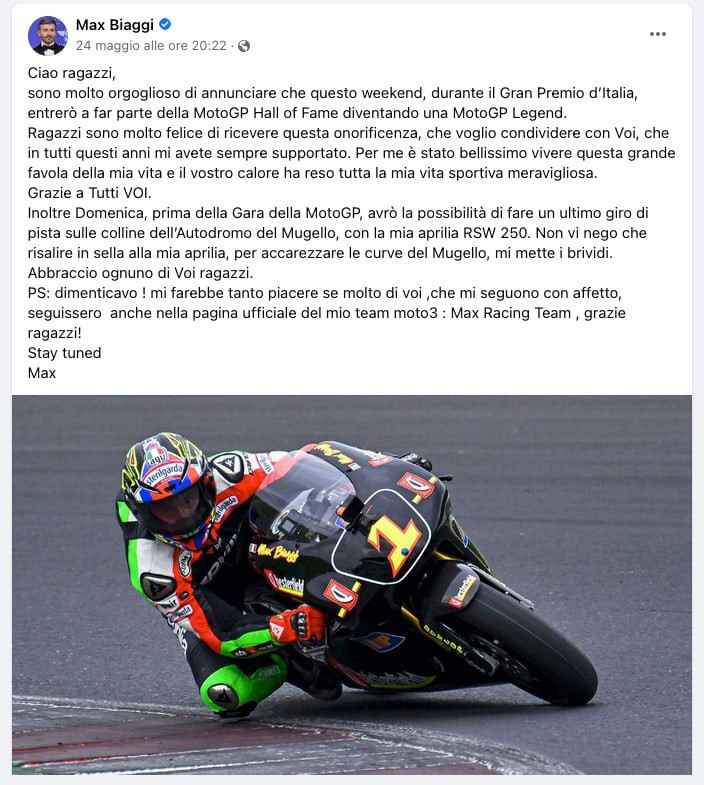 “Hi everybody,I am very proud to announce that this weekend, during the Italian Grand Prix, I will be inducted into the MotoGP Hall of Fame, becoming a MotoGP Legend.I am extremely happy to receive this honour, which I want to share with you, who throughout all these years, have always supported me. Living this fairy tale of my life has been fantastic for me and your warmth made my sports life wonderful.Thank YOU all.Furthermore, on Sunday, before the MotoGP race, I’ll have the chance to take one last lap around the track on the hills of the Mugello Racetrack, with my Aprilia RSW 250. I won’t deny that throwing a leg over my Aprilia, to caress the curves of Mugello, gives me chills of excitement.An embrace to all of you.P.S.: I almost forgot! It would give me great pleasure if a lot of you, who follow me affectionately, would also follow the official page of my moto3 team: Max Racing Team, thanks, everyone! Stay tuned. Max.”
Source: www.facebook.com/MaxBiaggiOfficial.

And this is what Max posted after his “consecration” as a “legend”: “Hi everybody, it was a fantastic day. I thought I'd be able to contain my emotions, but instead I was overwhelmed. Today (editor’s note: 27 May 2022 at Mugello International Circuit), I was given the title of MotoGP Legend and it was something special. Seeing my children, my friends, and many of those who have accompanied me throughout my long career, made me particularly happy. In my mind, I went back over many of the best moments of twenty years among bikes and in front of my children today, I felt proud. 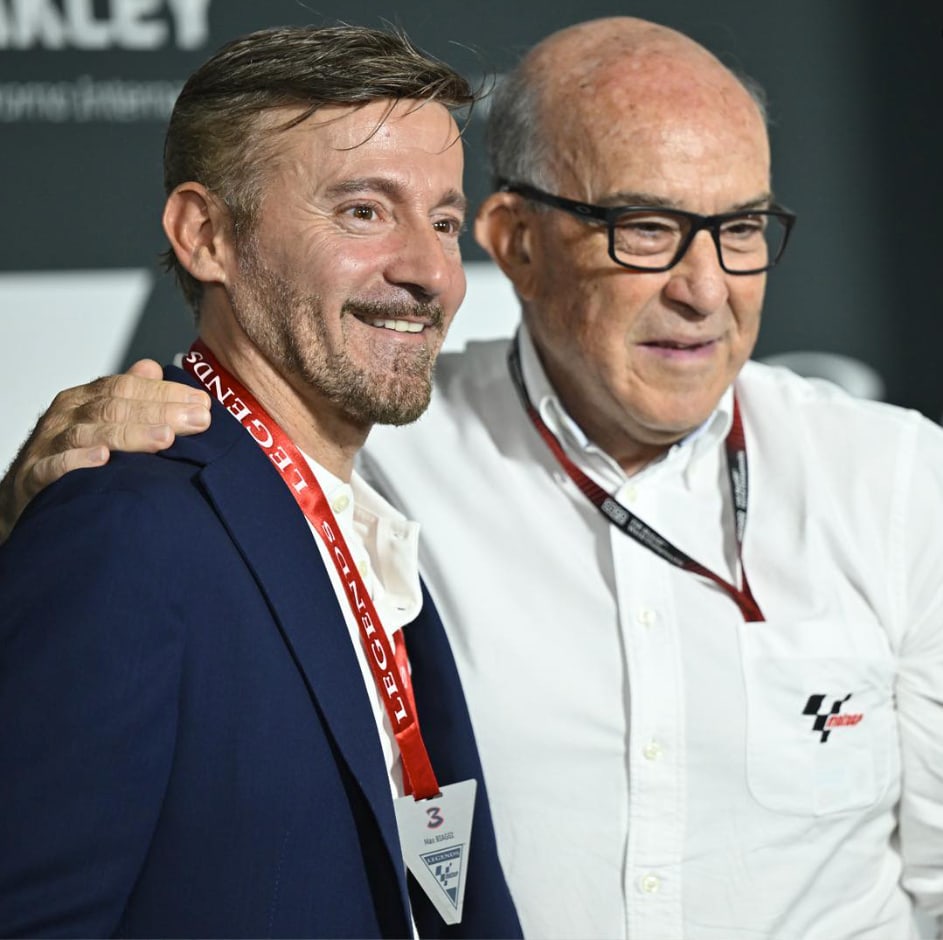 I wish to thank Dorna, in the person of Carmelo, for having inducted me into the Hall of Fame, my family, my friends, first of all Fernando, the many riders and many technicians who came to honour me today, and you all who have followed me for so many years and who have always shown me your affection. Today is truly a special day! Stay tuned. Max.”
Source: www.facebook.com/MaxBiaggiOfficial.

THE “HONOUR” LAP ON THE MUGELLO TRACK – MOTOGP.COM INSTAGRAM
www.instagram.com/p/CeJTLk_oUaK

“Max Biaggi is now officially a MotoGP™ Legend. The four-time 250cc World Champion was inducted into the MotoGP™ Hall of Fame at the Gran Premio d’Italia Oakley. With the spectacular Autodromo Internazionale del Mugello proving the perfect backdrop, Dorna CEO Carmelo Ezpeleta presented Biaggi with his MotoGP™ Legend Medal at the ceremony on Friday, with plenty of famous faces from the paddock in attendance. In 2007, the Roman went over to the WorldSBK Championship, where he was one of the few to win as a rookie. In 2010 and 2012, Biaggi won another two world titles, thereby arriving at six world championship wins earned in his career before retiring.
Biaggi started racing at the age of 18. In 1991 he raced in his first Grand Prix races, taking home points in the 250cc class. 1992 heralded his first win and by 1994, the “Roman Emperor” was a World Champion for the first time, also taking Aprilia’s first title in the 250cc class. Biaggi took the 250cc crown an incredible four times in a row and with two different factories, reigning in the category from 1994 until 1997 inclusive, reserving his place in history.

Mugello, Max’s “world championship” bike on display; fans in the Aprilia Racing paddock area for the compulsory selfie with the new MotoGP legend.

In 1998 Biaggi moved up to the premier class and, incredibly, he won on his 500cc début. He came runner up that year and began another run of impressive performances, never finishing outside the top five in the Championship in any premier class season between 1998 and 2005, his final hurrah in MotoGP™. By the time Biaggi departed the Grand Prix paddock he had accrued 42 victories, of which 13 were in the premier class, and 111 podiums and 56 pole positions overall.
In 2007, he moved to WorldSBK with team Alstare Suzuki. In Losail, Max won on his début and finished the season third in the overall standings. In 2008, he defended the team Sterilgarda Ducati colours and then he headed up the factory Aprilia project on the occasion of the Noale-based manufacturer’s return to the championship. On two other occasions, he was crowned world champion, namely in 2010 and in 2012, the year he beat Tom Sykes by just a half a point. 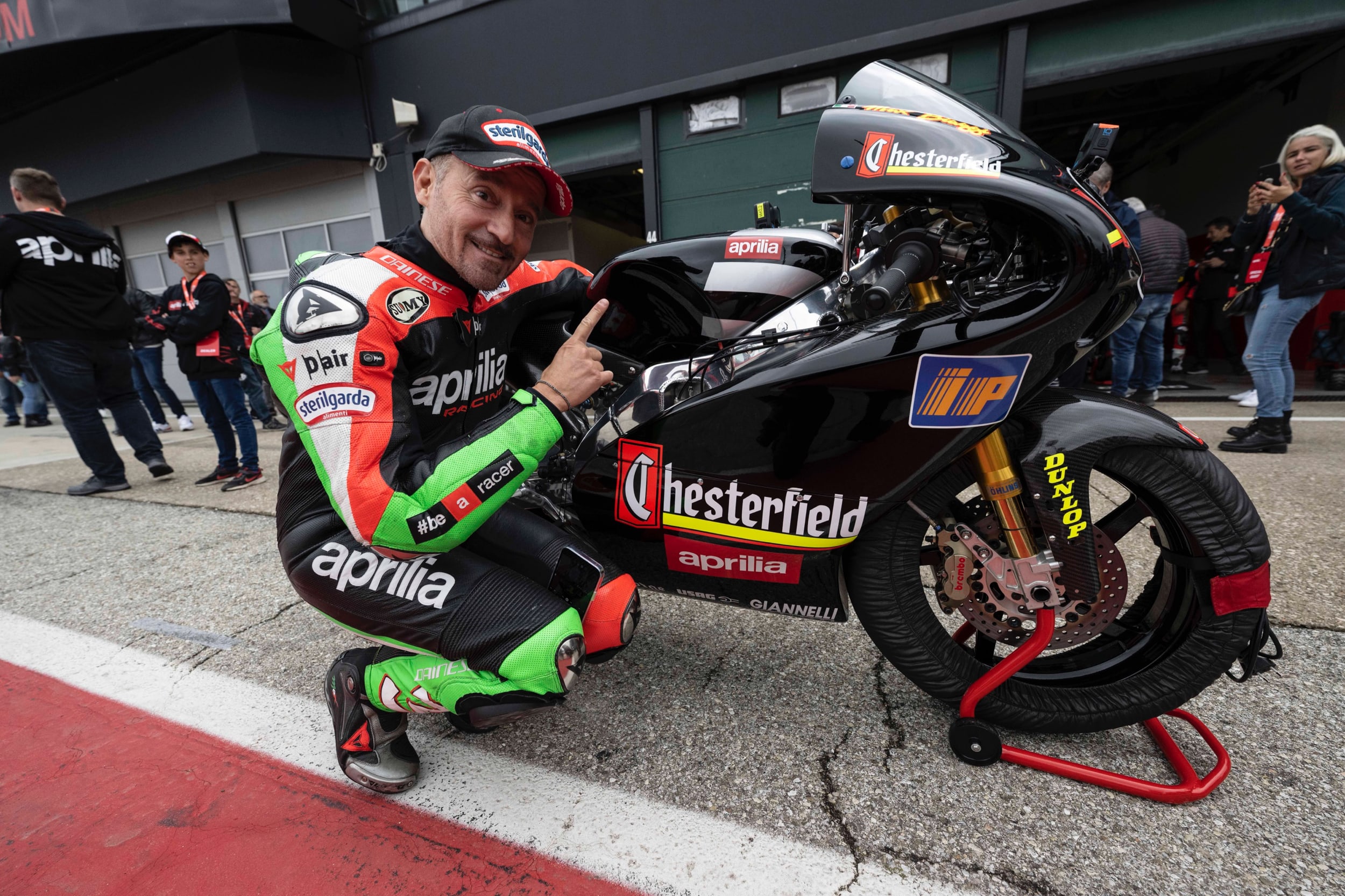 Biaggi ends his career with Aprilia, the same manufacturer he started with in 1991. At the end of his career, his trophy case includes 21 wins and 71 podiums and he is also the first MotoGP™ Legend to also be a WorldSBK Champion. Since then, the Roman has been a frequent presence in both championships, not to mention his WorldSBK ‘wildcard’ in 2015. In 2019 he became Team Principal in the Moto3™ World Championship. Biaggi is one of the only two riders who have clinched a title in both MotoGP™ and World Superbike. The other is John Kocinski, 250cc world champion in 1990 and WorldSBK champion in 1997.”

ALL THE RIDERS WHO ARE MOTOGP “LEGENDS”:
www.motogp.com/it/riders/Legends 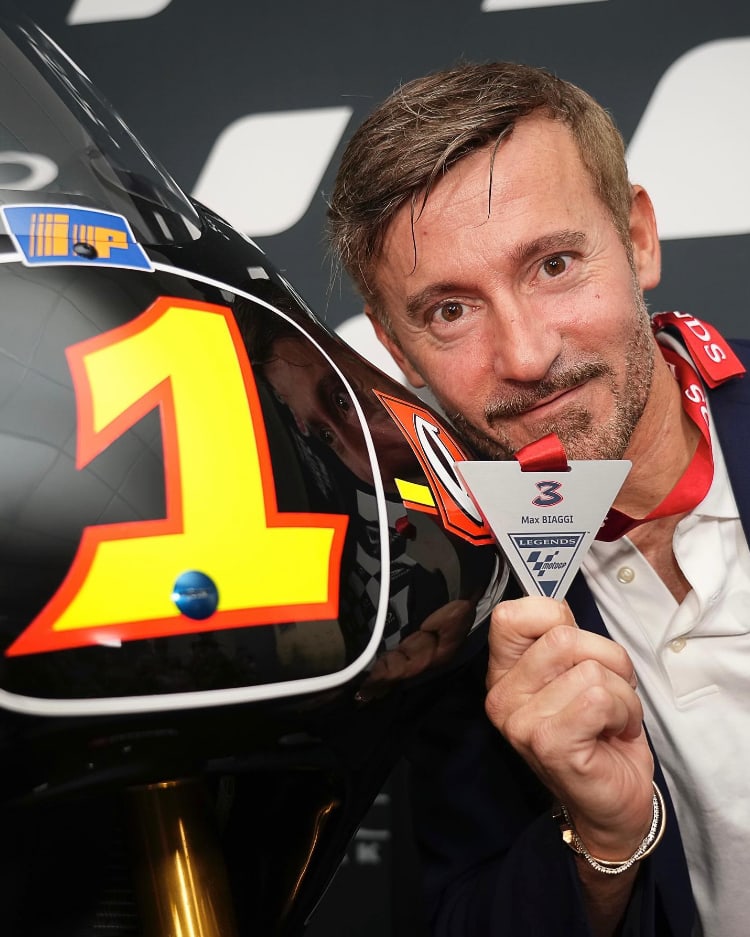