MOLLY, THE VESPA THAT RELEASES THE VAPOUR OF HAPPINESS 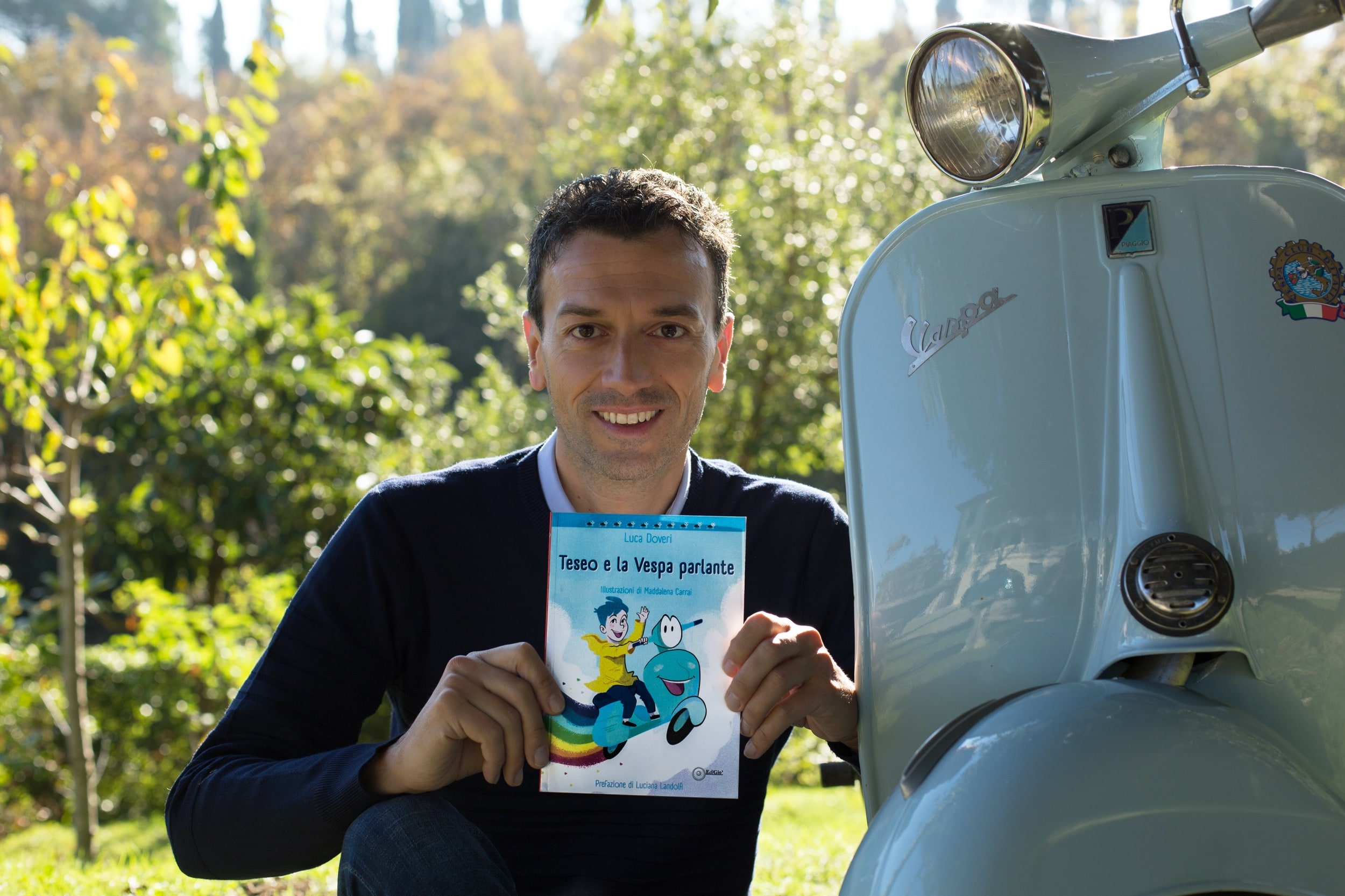 Luca Doveri with his book and the 1963 Vespa he inherited from his grandfather. A perfectly preserved vintage model with light blue livery, just like Molly’s.

THIS IS THE MAIN CHARACTER IN LUCA DOVERI’S BOOK “TESEO E LA VESPA PARLANTE”. A FANTASTIC AND JOY-INSPIRING ADVENTURE. IT ALL BEGAN WITH A MAGICAL ENCOUNTER BETWEEN A CHILD, ON A FIELD TRIP AT THE PIAGGIO MUSEUM, AND A SCOOTER THAT WINKED AT HIM...

From the left: the book cover; on the right, internal illustration.

November 2020 – Released in 2016 in an exclusive edition for the Piaggio Museum, now the book “Teseo e la Vespa parlante”(Teseo and the talking Vespa, translator's note) by Luca Doveri (published by EdiGio’) is available in bookshops and online. The Italian author writes on his FB page (it-it.facebook.com/l.doveri): “My new book is out! It arrived at a time when the Earth definitely needs joy, colours and the Vapour of Happiness! So, come on! I’ll be expecting you astride Molly, the talking Vespa that will guide you on this extraordinary adventure to transform the planet we live on into something special... is your heart ready for magic? Thanks to Creepy Gaga - Maddalena Carrai for the illustrations, to the editor EdiGio', to the Piaggio Museum for having had the idea to create this book and to Luciana Landolfi for having written a beautiful foreword.” 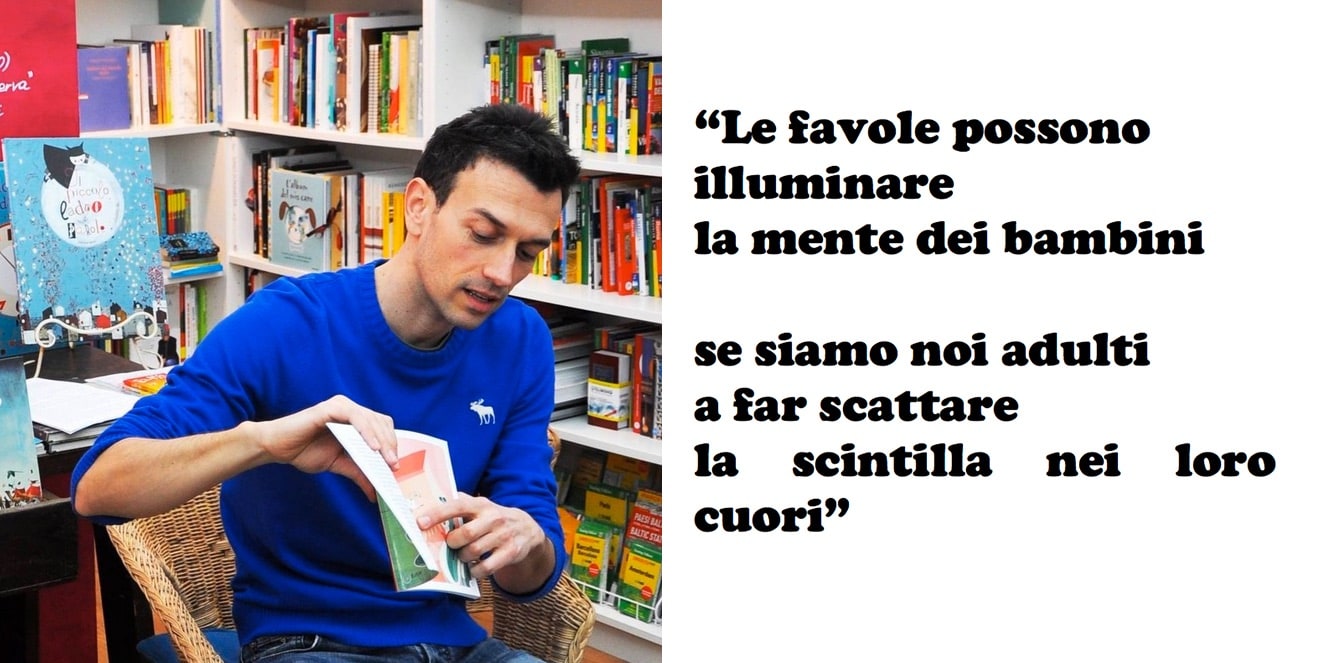 “Fairy tales can enlighten children's minds if we adults are the ones to trigger the spark in their hearts”.

The birth of this children’s book, which is also entertaining for adults, is an adventure in and of itself. Recounting the story is the author, 40-year-old Luca Doveri (who lives in Casteldelbosco, province of Pisa, a holistic operator and avid traveller, especially to the Orient). “This year, during the months of quarantine, I finished a project that began in 2014 with the Piaggio Foundation (in Pontedera, Pisa) which, at that time, had asked me to come up with an idea for a children’s book. I was living in London at that time and I got to work straight away, writing at the table of my local Starbucks and listening to music on my headphones. I had already written other books and fairy tales for children and I enthusiastically accepted the Foundation’s request. And that is how the book, Teseo e la Vespa parlante, enriched by the illustrations of Maddalena Carrai (an illustrator from Livorno who had the opportunity to work for Lady Gaga during one of her European tours) was initially available for visitors to the Piaggio Museum in its bookshop, then it was published by EdiGiò and now it is online and in bookshops all over Italy.” 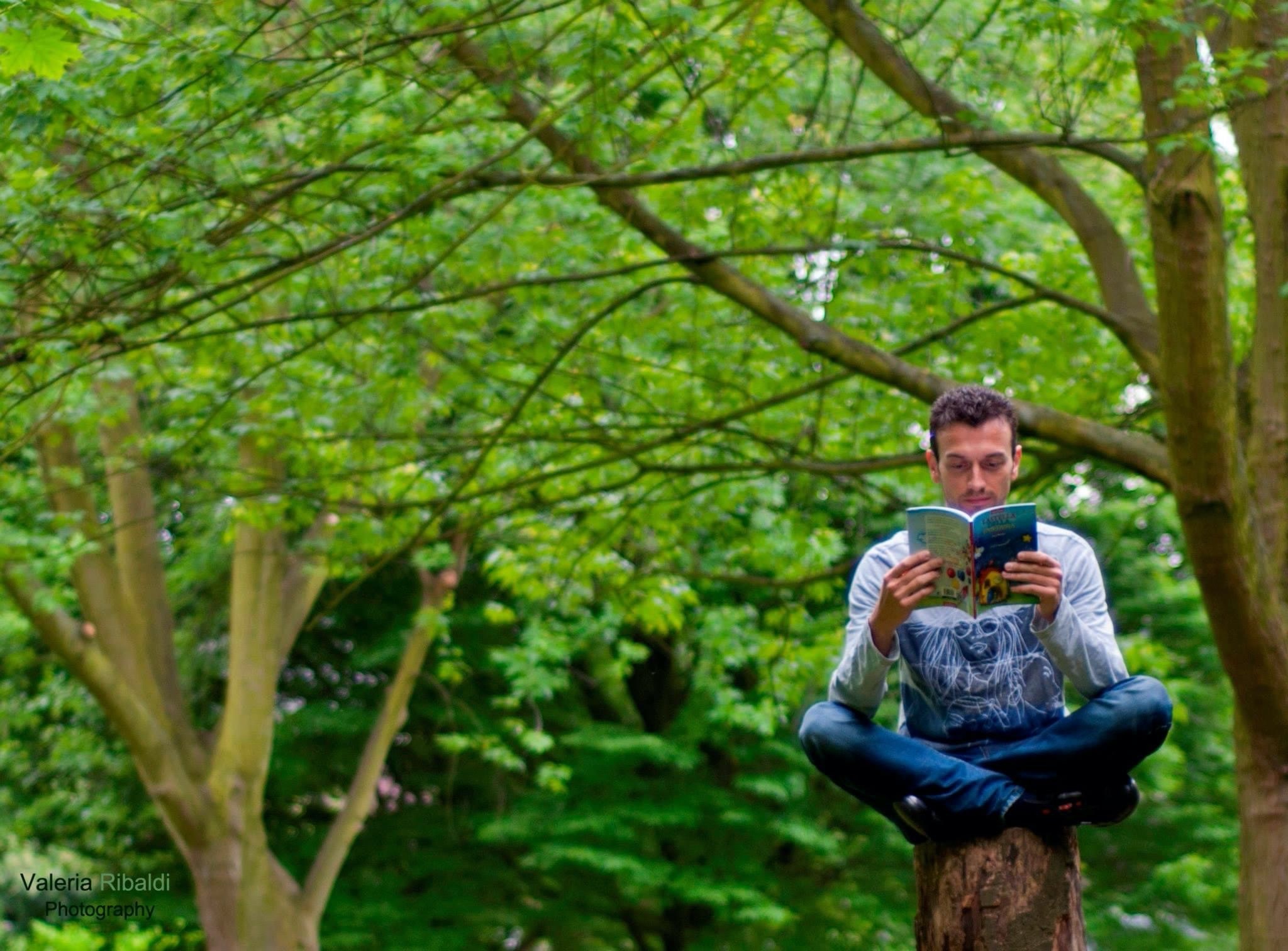 Luca Doveri in a park in London (photo by Valeria Ribaldi).

Luca continues: “Even though I wrote the book while I was living in London in 2015, I am truly happy about its release this year, because the bond with the quarantine period that we went through is astonishing. In fact, the story tells of the vapour of happiness, a magical vapour that comes out of the Vespa exhaust and forms the colours of the rainbow in the sky, very similar to the banners we saw all throughout these difficult months with the slogan ‘Andrà tutto bene’ (translator's note: “Everything is going to be alright”). And so, during the lockdown in the spring, I had the idea to ask author and poet Luciana Landolfi to write the foreword for the book, the woman who began to spread the phrase from the city of Brescia, reproduced on many Post-it notes and which, through many ‘acts of magic’, were attached to walls, doors and windows, thus multiplying into millions of thoughts and phrases which then went ‘viral’ all over the world, along with the drawing of the rainbow.” 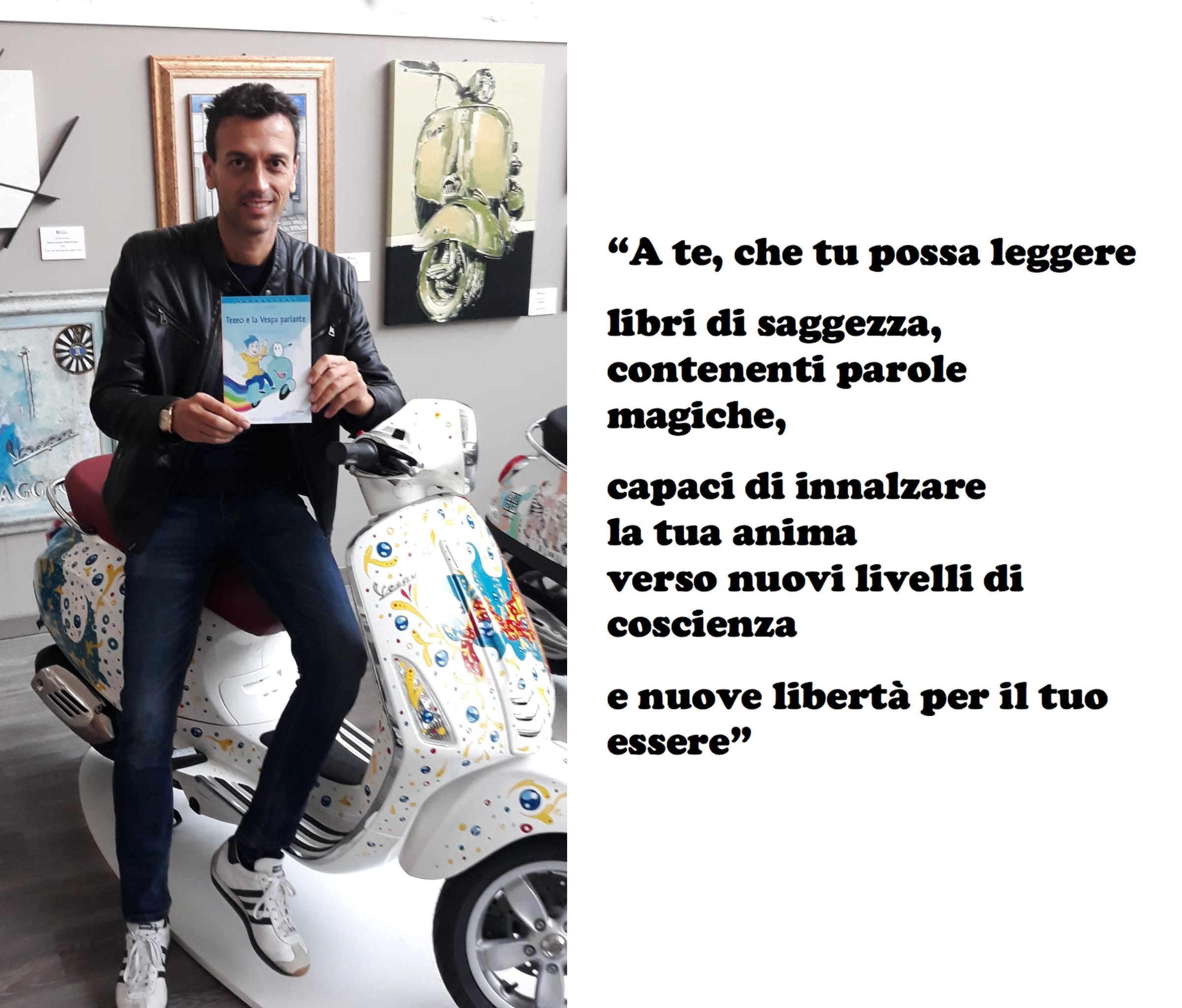 Luca Doveri with his book at the Piaggio Museum, alongside the “Pop Vespa” with the livery decorated “live” by Maddalena Carrai right before the visitors in spring 2014 and presented to the public during a musical event on 21 June of the same year. On the right, the dedication to the readers who open the book. “To you, may you read books of wisdom, containing magical words, capable of lifting your soul to new levels of consciousness and new freedoms for your being”.

“The Vespa which is the main character of the book is called Molly and the child is Teseo. The two meet at the Piaggio Museum and run away together on a grand adventure: saving the planet Earth before it is covered by sadness... The book’s message is a deep one: Our happiness is also the happiness of everyone who lives on the Earth and we must try as much as possible to transmit beautiful emotions and bright words” (represented by the vapour of happiness in the book). I think that teaching this idea to young children with a book is a good start to make a change for the better.”

“Can you imagine what can happen if during a trip a child encounters a magical Vespa that is able to speak and fly? This is what happens to Theseus during a visit to the Piaggio Museum. A magical adventure in the dreams of those who want to transform this world for the better. Theseus is doing his best. And you? Do you want to help him? We are waiting for you in the skies of the Earth together with millions of Vespas and the seven colors of the rainbow, up there beyond dreams, up there where all together we can sow new seeds to improve this planet!”

And Luca Doveri concludes: “When this complicated period has passed, I plan to present the book with a stage performance adapted for young and old. Maybe we’ll be able to do it in the Piaggio Museum auditorium. And then, I’d also like to publish a version in English (and other languages) for children all over the world, considering the fact that Vespa is well-known all over the place - a symbol of freedom and friendship.” 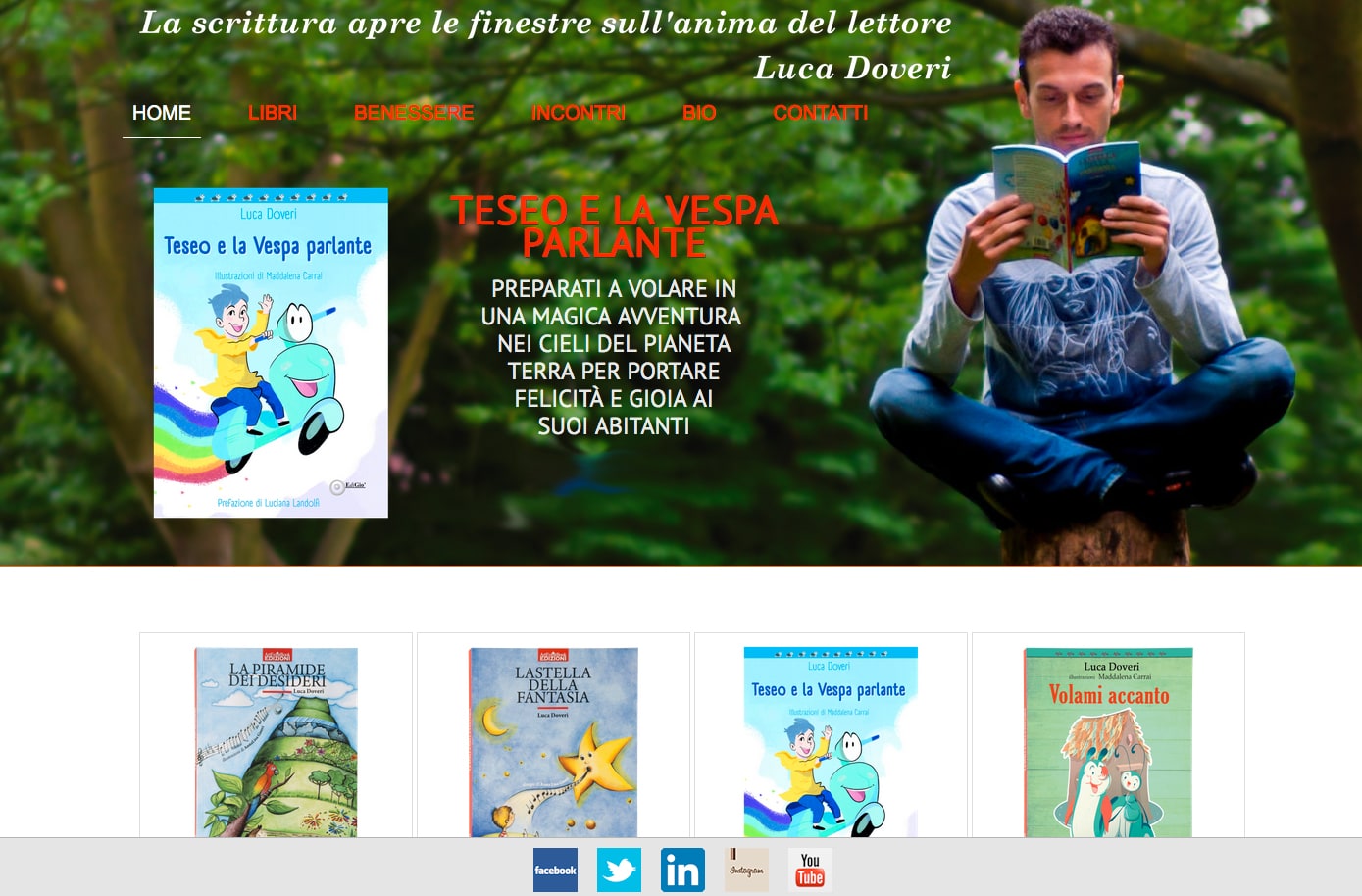