FROM OREGON TO JAPAN 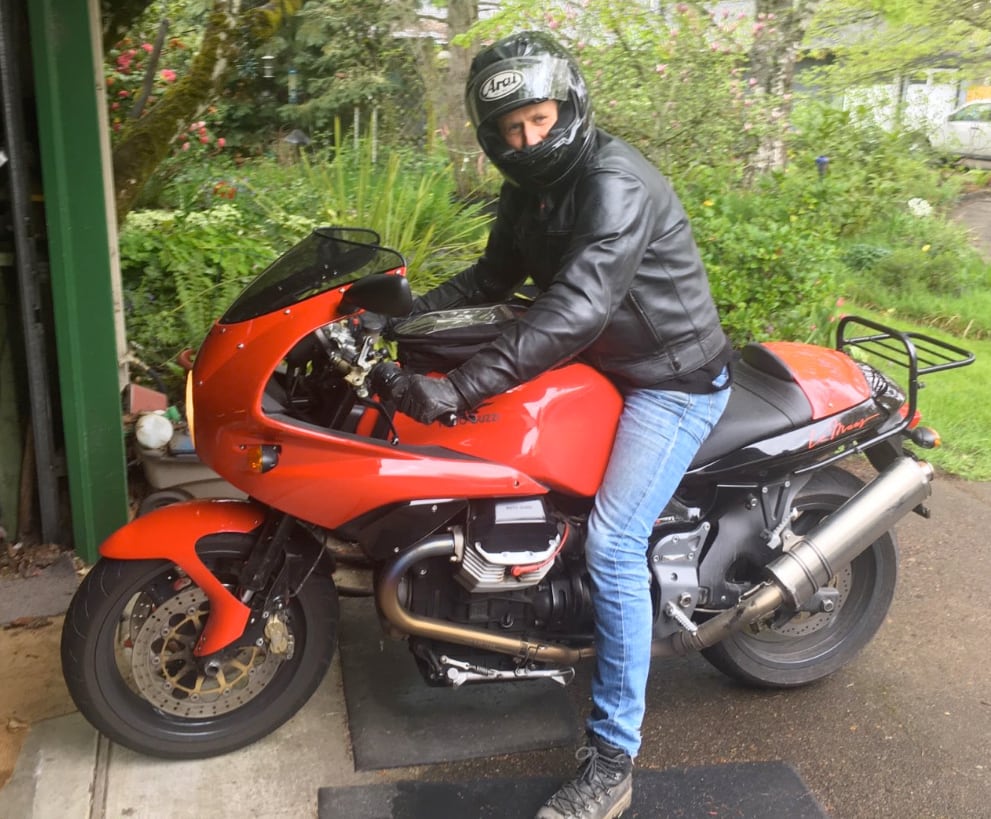 WRITER AND PROFESSIONAL TENNIS COACH WHO LIVES IN PORTLAND. AUTHOR OF THE BLOG MEDIUMDOG.COM, WHERE HE RECOUNTS HIS PASSION FOR THE EAGLE BRAND. THE AMERICAN GUZZISTA IS ABOUT TO MOVE TO THE LAND OF THE RISING SUN WITH HIS WIFE LI PING. THEY’LL TAKE WITH THEM THEIR MOTO GUZZIS, NORGE AND LE MANS, A VESPA GT WITH SIDECAR WHERE PEACH “TRAVELS”, THEIR FOUR-LEGGED FRIEND. AND ABOUT THE NEW V85 TT HE SAYS...

January 2022 – We received an E-mail on 15 January with the subject line: “For the Love of Guzzi” and in the text just a link to the blog mediumdog.com and the story entitled “Mondospeed”. It piqued our curiosity, so we gave it a read. It’s written by a biker from Portland, Oregon (USA) - a Moto Guzzi enthusiast - who talks about his Norge GT8V and his Le Mans. He talks about going from a touring bike to a pure sport bike, plus the vicissitudes of finding original parts and a reliable place to service his beloved bikes. And he talks about the would-be thief who jammed a screwdriver to the ignition switch of the Norge in an attempt which was unsuccessful but left the Guzzista with damages to repair. It was “a shot to the heart,” he writes, seeing his bike violated like that (here is the photo). 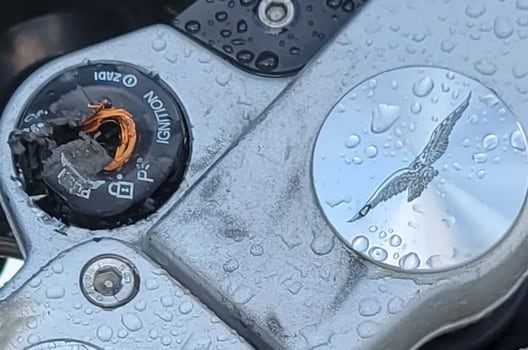 And he goes on to write about friends who are no longer with us, now “angels”, and about the new life that awaits him and his wife in Japan. And he talks about himself, ready to ride on foreign roads, with a final toast, “to motorcycles we’ve loved and to true riders we’ve lost. To the loved and to the lost.” This is how he ends his story, as gripping as a best-selling novel.

It’s a story that we would like to share with our biker readers, so here it is: mediumdog.com/mondospeed


But naturally, that was not enough for us, and we want to know more about this Guzzista from Oregon, so here is the interview he granted us. Let the emotions begin!

Tell us about yourself - who are you and what should our worldwide readers know?
“Patrick Jennings. Writer and Professional Tennis Coach. 54 years old. Currently living in Portland, Oregon after spending the previous 15 years in Los Angeles and 15 years before that in New York. Hobbies include motorcycles, tea, books, film, and (more recently) Jazz. Worldwide readers should know my life, creative and otherwise, revolves around a revered six-year-old (female) Rottweiler named Peach, short for Blood Peach, the inspiration for mediumdog.com.” 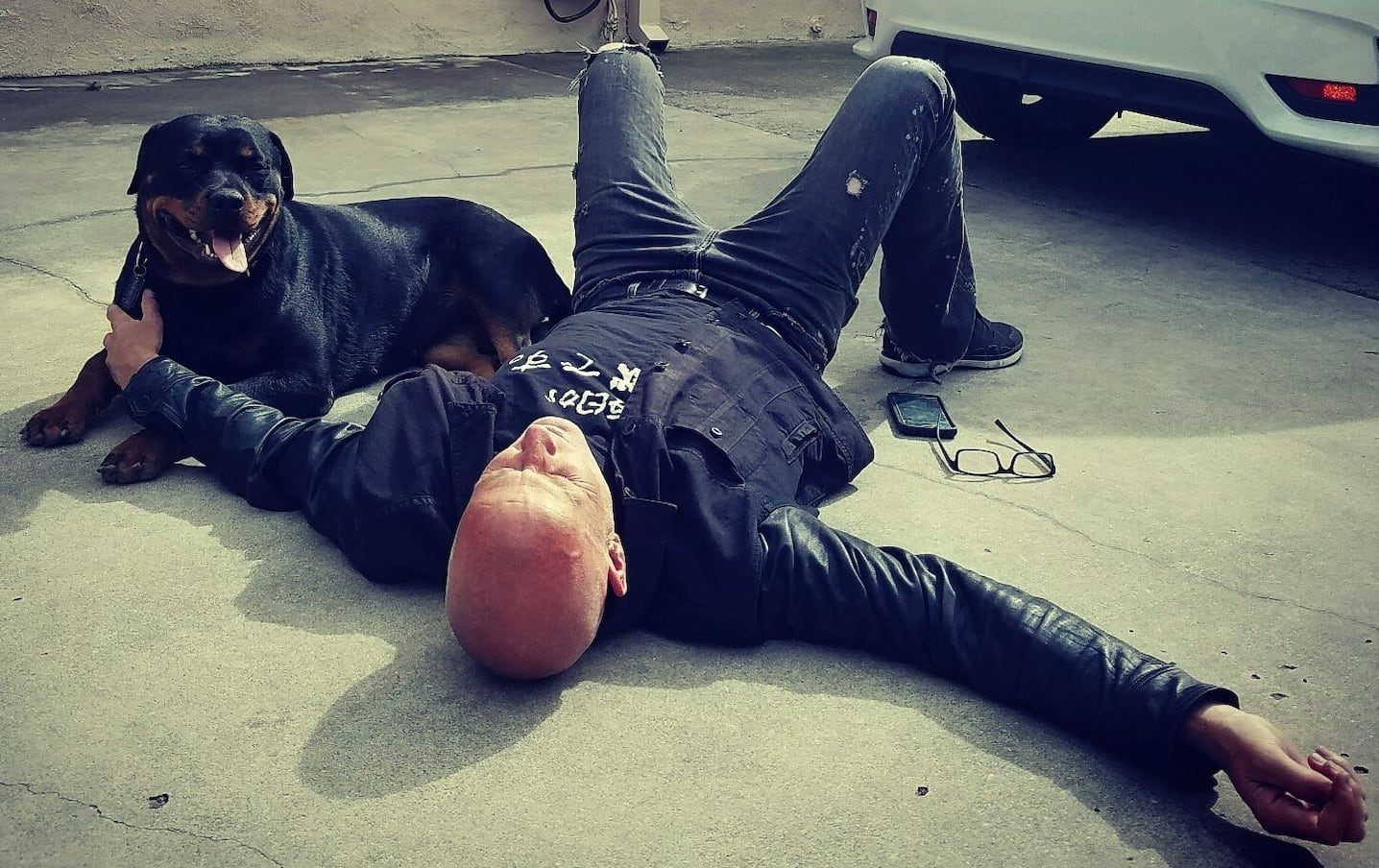 Patrick with his beloved dog, Peach; she is his inspiration for life and the stories he tells in his blog, mediumdog.com

When and why did you ‘fall in love’ with Moto Guzzi? An American who loves these Italian bikes so much and which, in the story you tell on your blog, you call magic...
“Like most life-long motorcyclists, I have always admired Moto Guzzi in terms of their history, design, sound, etc., but I really fell for Guzzi the first time I took my 2016 Norge for a test ride. Love at first ride. No bike I’d ridden up to that point, and I’d ridden a lot of bikes starting when I was a kid, ever had a personality anything like it. Just a playfulness and sense of pure joy that is hard to explain. I now have two and recently picked up an old Ducati ST3 thinking it might put a similar smile on my face, but the Guzzis are unrivaled in this respect.” 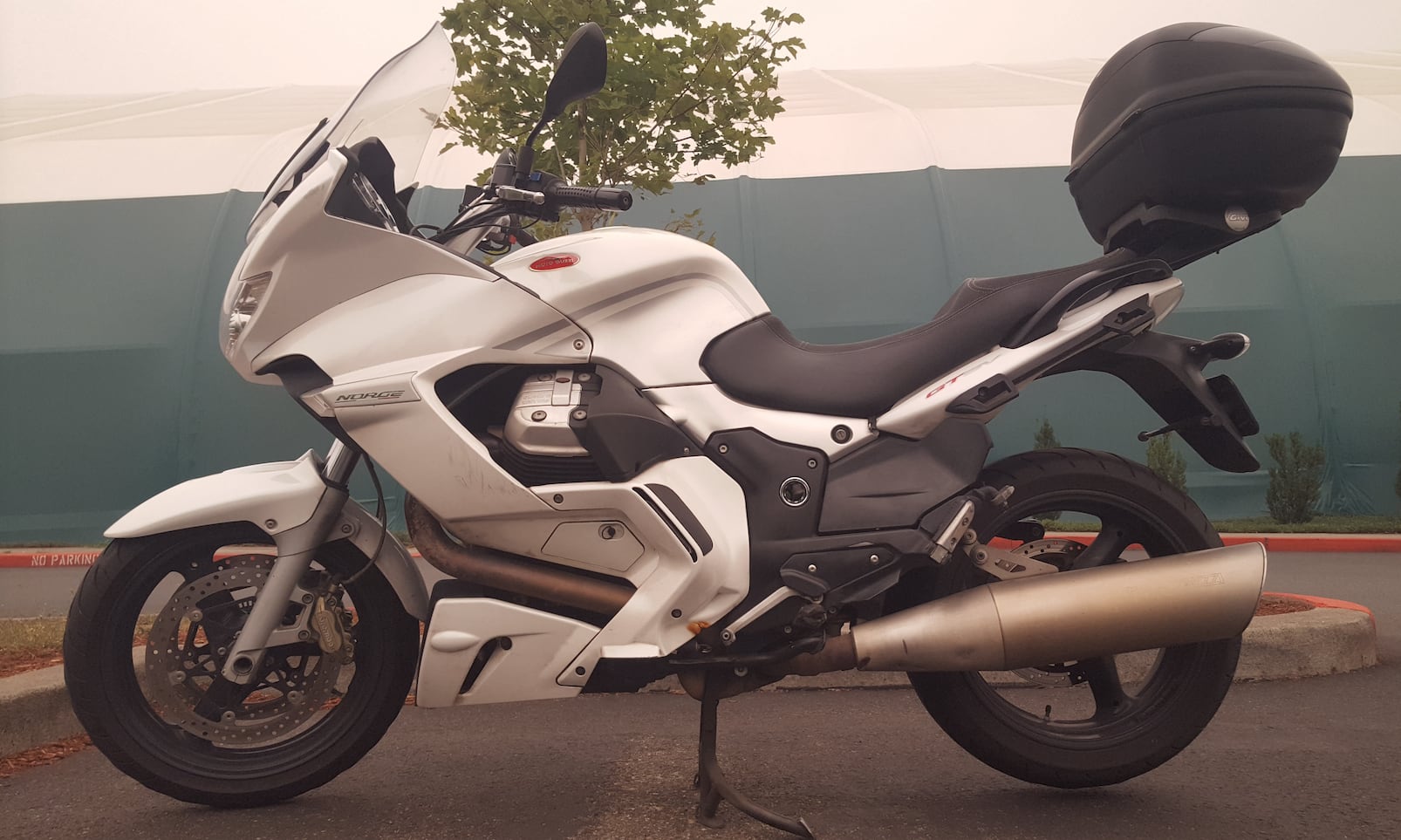 Why did you purchase the Norge in 2018? And do you use it in your free time or as a daily rider?
“I bought the Norge in August 2018, shortly after moving to Portland from Los Angeles. I had sold all of my bikes there and was looking to start over in terms of motorcycles and, I suppose, life in general. My daily commute to the tennis club where I work in Camas, Washington is 20 miles from my house in Portland so I was looking for an all-season bike that would be my main mode of transportation. I knew I would be spending a lot of time riding in the rain, so that was a factor, but I had actually been looking at adventure bikes, namely the new Africa Twin Adventure Sports, before I saw the used Norge for sale online. Adventure bike because I’ve owned a few from BMW in the past and thought I might be doing some off-road stuff in the Pacific Northwest in my free time. But then the Norge appeared along with the story about the original Japanese owner I mention in Mondospeed and all bets were off. I bought the bike unseen over the phone and drove up to Seattle to pick it up the next day.” 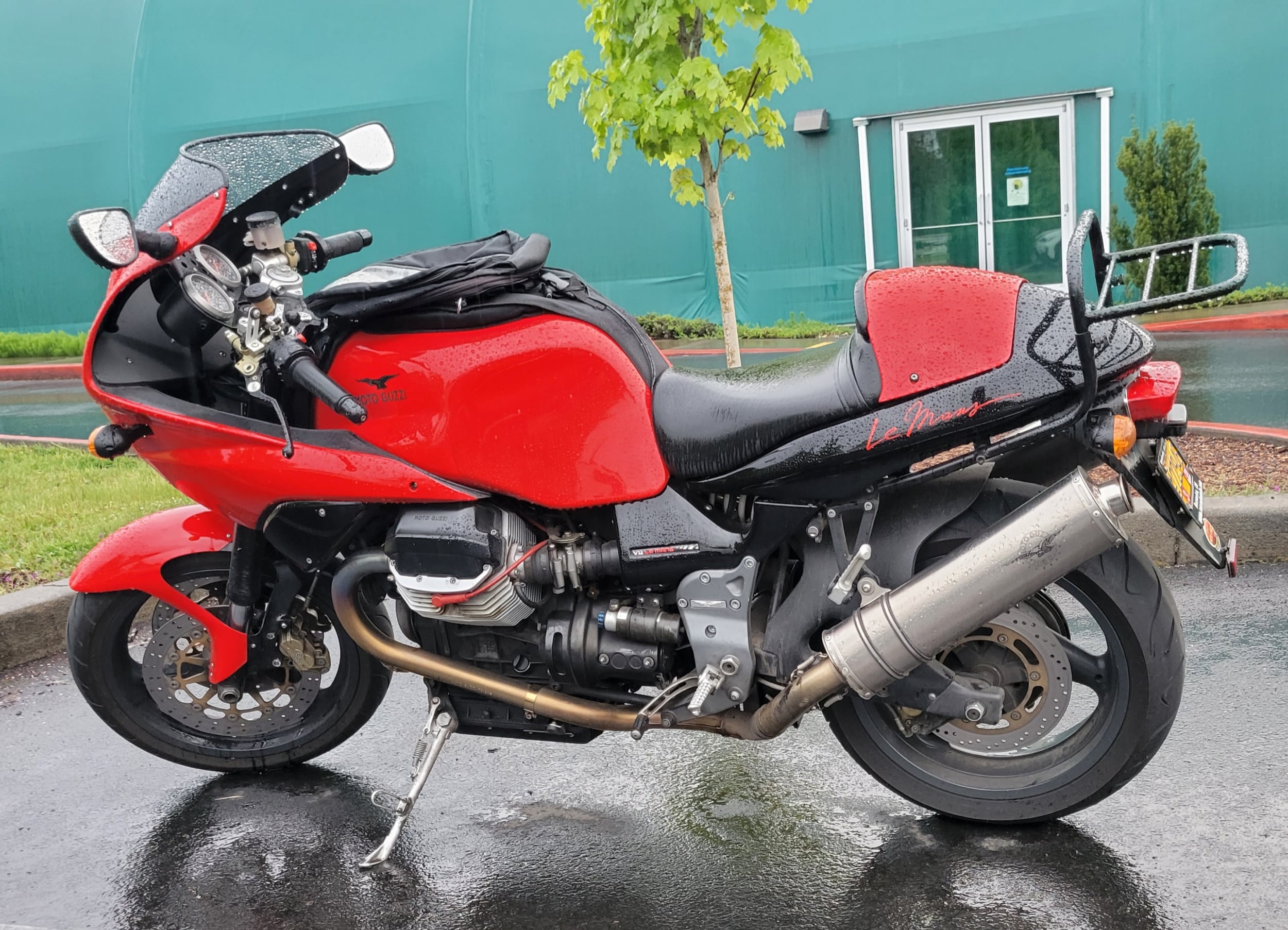 Despite your difficulties finding a qualified service center in your area (as you mention in your “flavorful” blog), when and why did you buy another Moto Guzzi?
“I had already owned the Norge for a couple years before I bought a 2003 V11 Le Mans on April 24th, 2021 as present to myself the day before my 54th birthday. It’s a bike I had long lusted after since first seeing a picture of one more than ten years earlier and thinking it was the coolest looking motorcycle of all time. There was just something about it that appealed to me on a primal level. Then seeing mine in person, I can’t’ really describe it. I’ve had several bikes that I have really loved, but this red Le Mans was the bike that had been waiting for me my entire life. I felt that the instant I saw it parked in the guy’s driveway I bought it from and still do.”
In your blog there is a brief comment on your daily trip from Oregon to Washington in 2020... Can you tell us more about that?
“At that time, I was riding my Norge to work every day from Portland, Oregon to Camas, Washington, which is about 20 miles. Because it is the Pacific Northwest, most of those rides are rain-soaked and can get a little monotonous. This particular piece you mention, Guzzista in Place, was a meditation about riding to work at the very start of the Corona pandemic. The first cases in the U.S. were detected in Seattle around that time and nobody knew what we were dealing with. Stories about how hard the virus was hitting Italy were appearing in the press and there was just this sense of terror coming our way. The State of Washington felt like ground zero at that time and my job as a tennis pro involves a lot of contact with people. I mention it feeling ‘hot zoney’ in the sense that riding to work felt a little like Russian Roulette in terms of being exposed to the virus, which was frightening and exciting at the same time being in the eye of the storm.”

Peach in the sidecar (complete with soft top) and “posing” on the seat of the fully loaded Vespa GT with Patrick at the controls.

In your photos, we see you riding a Vespa GT with your dog in the sidecar...
“The scooter is a 2011 Vespa GTV 300 with a custom sidecar I purchased from Scooterworks in Chicago and had assembled by Massimo in Costa Mesa, California. The bike, of course, belongs to Peach (my dog). She loves it. That is the two of us in the picture in front of our house before taking it for a spin around Portland.”
Can you tell us about a thought or memory from your life as a rider?
“My most memorable event of more than forty years riding motorcycles is the day I describe in Mondospeed ( mediumdog.com/mondospeed). I just felt like everything about that day and the weeks that followed had a sense of destiny about it and was completely out of my control, for better and worse, which is why I needed to write about it. I loved both my Guzzis before that, but I’m not sure I realized how much they had become an essential part of my life. I wanted to share that with my dear friend, Monte (Mondo), during his final hours and with a larger audience afterwards. He really was there with me on those two bikes that day, clinging to life on the Norge before finally letting go in peace on the Le Mans. Of this, I have absolutely no doubt.”

From the left, Li Ping (with Moto Guzzi cap) and her husband Patrick, both in the inseparable company of Peach.

You write that you are planning a new life in Japan. Will your Moto Guzzis go with you?
“Yes. My amazing wife, Li Ping, was born in Taiwan and moved to Japan when she was ten years old. We met in New York many years later, where she owned several of my favorite restaurants, and we spent 15 years together in Los Angeles after that. As much as we’ve enjoyed our time living in Portland, Japan is calling her home and I am grateful our life together has afforded me the opportunity to join her. Not a lot of people my age get the chance to just say so long to everything and ride off to the other side of the world. The Norge, Le Mans, and Peach and her Vespa will be about all I take with me. What else is there, right?” 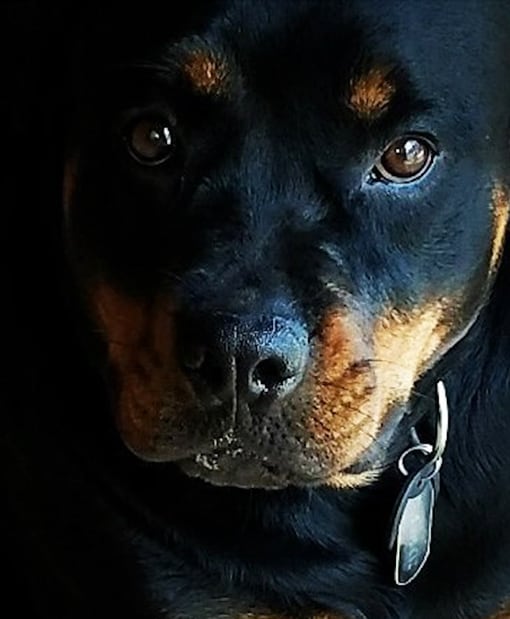 Last question: out of the bikes in the current Eagle-brand range, which is your favorite?
“Wow. That’s a tough question. The V85TT is one giant grin just thinking about. Just a fantastically original bike. BUT that new green V100 Mandello I’ve been reading about appears to be a true work of art. I would say the V85TT only because I’ve already sat on a few and imagined myself covered in dust.”

(Source of images: 2022 Moto Guzzi range brochure). All the other photos for this article are by Patrick Jennings.

Thank you, Patrick, and good luck in your new, next life. Still astride your Moto Guzzis, on new roads. 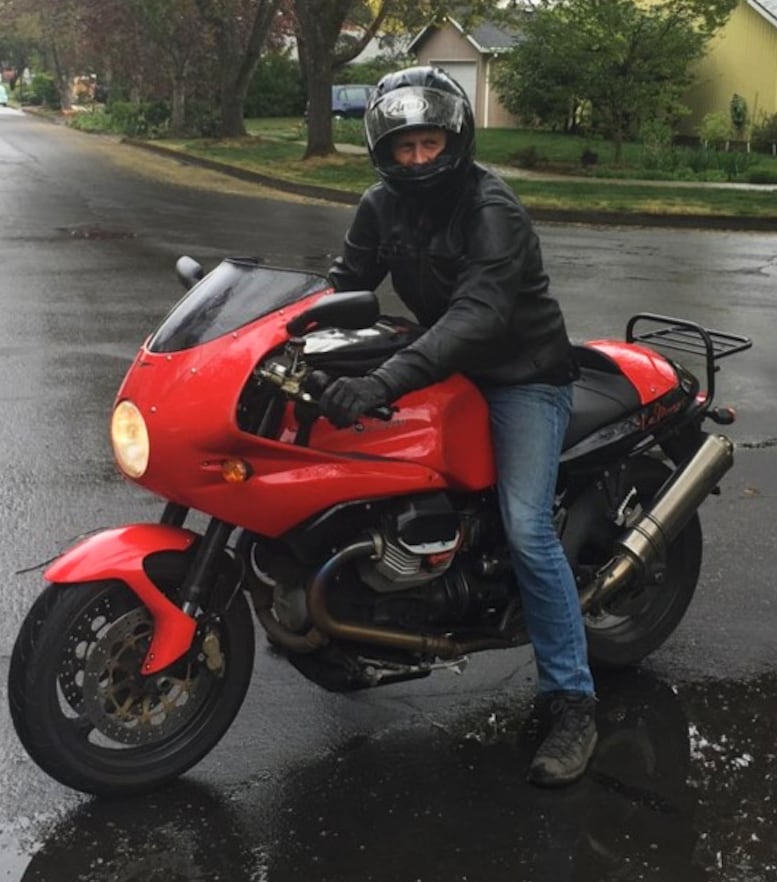