IN MILAN AND LUCCA:
THE SMALLEST THEATRES IN THE WORLD... ON APE! 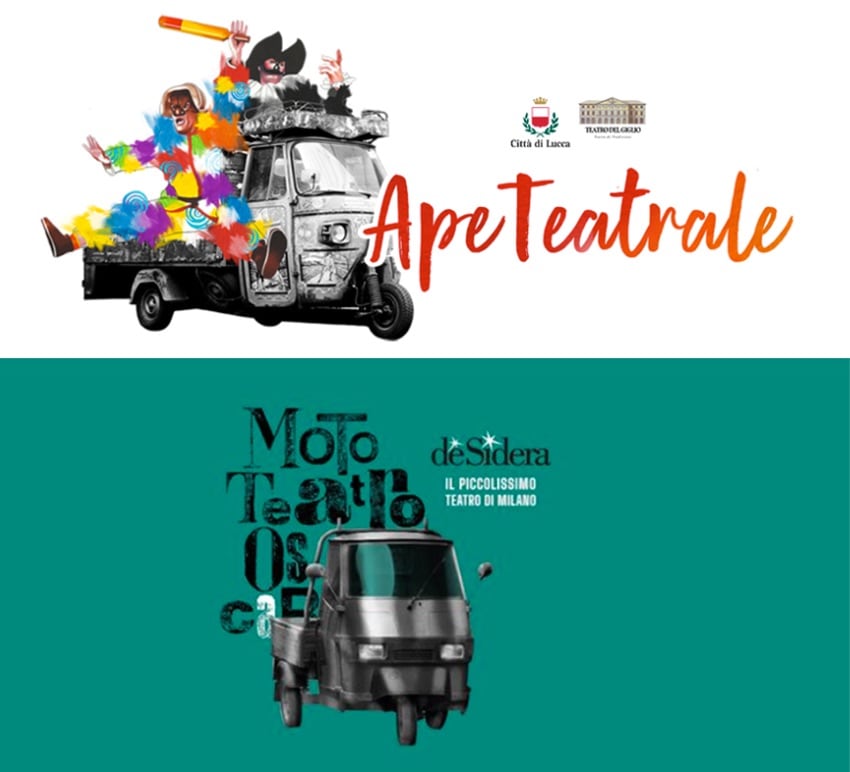 July 2020 – In its more than 70 years of life, the small commercial vehicle Piaggio Ape has transported a bit of everything, from cargo to people. The cute Ape is so versatile that it “transforms”, adapting to a vast range of needs: street food protagonist, and mobile news stand, mini-pizzeria and roadside café, or even an ATM machine and library on wheels to reach more isolated locations. Still not content even with so much success, it has even “shown off” in cultural environments. Here are two great initiatives in Italy, from Lombardy to Tuscany, that have received widespread attention from the national press.

MILAN: MOTO TEATRO OSCAR DESIDERA, THE TINY THEATRE OF MILAN. He is Giacomo Poretti (of the famous Italian comic trio, Aldo, Giovanni and Giacomo): actor, author, writer. Along with Luca Doninelli and Gabriele Allevi, as of October, Giacomo took over management of the Teatro Oscar of Milan, later closed due to the lockdown. Hence, the idea, which he himself explained to the newspapers and TV recently, presenting the itinerant Moto Teatro Oscar poster which started successfully in late June. “If the theatres close, it’s up to us, theatre folk, to go out into the city to meet our beloved fans… And so, we of Teatro Oscar Desidera are also on the road with the smallest stage in the world - an Ape, the humble (but also legendary) three-wheeler… with all the life that has passed over the Ape cargo bed, nothing seemed more suitable to transport the goods that the Theatre can offer everyone: its own faces, its own stories, its own words…”

A “physically-distanced” public watches a Moto Teatro Oscar Desidera show in the garden of the Milan Triennale; in the photos above: the setup of the en plein air theatrical evening and actress Angela Demattè’s performance.

Each show – including serious material and other, lighter acts – is, by necessity, almost always a “one man – or woman – show”: it could be no other way, performing from the bed of an Ape Car, the smallest and most original stage in the world. The Moto Teatro Oscar has a full programme to liven up the Milan summer and the shows will be held in various locations with the Ape… co-starring! 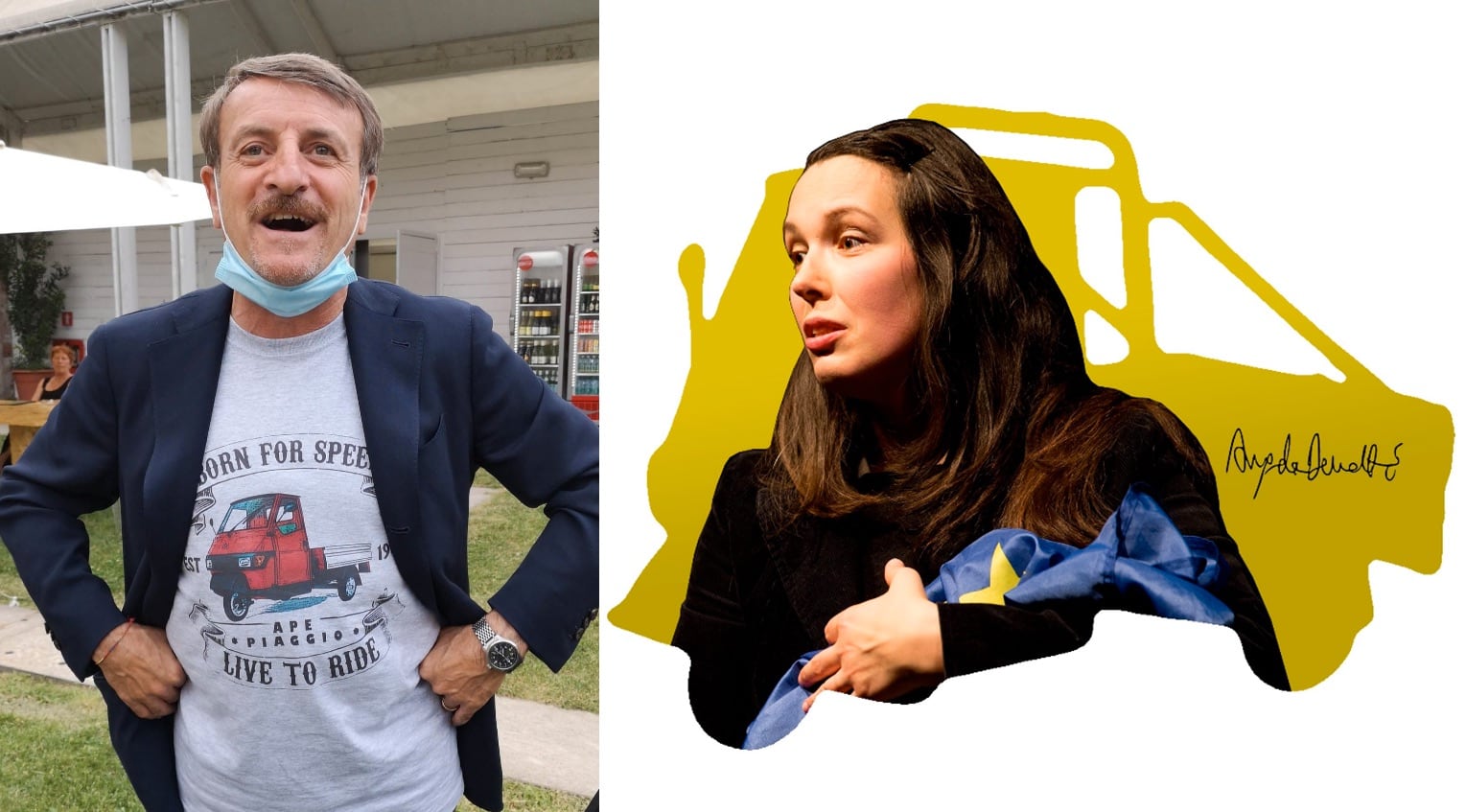 On the left, Artistic Director, Giacomo Poretti, with Ape-themed T-shirt; on the right, “Mad in Europe” by and with Angela Demattè, who performed on 30 June in the Triennale garden.

LUCCA: THE THEATRICAL APE WITH BALANZONE AND ARLECCHINO. An itinerant stage of art and passion: introducing Ape Teatrale (Theatrical Ape), a project born out of the idea of actor and performer Marco Brinzi, an initiative of the Teatro del Giglio of Lucca in collaboration with the If Prana Company and the Municipality of the splendid Tuscan city.

A 25-stop tour in July, with Balanzone and Arlecchino (characters of popular theater) as the big, entertaining and thought-provoking stars, in a mixture of script and improvisation, a half-hour show and then off to another stop, all through the historic centre and the neighbourhoods around the city. Three shows a day, free of charge, that you can watch in total safety with plenty of distance between the seats for the spectators. “With Ape Teatrale, we are taking the theatre to the people, to families, in the squares”, the organisers explain. So, it will be a surprising Lucca summer. Thanks also to the small and industrious Ape, which transports the backdrop and stage items on its bed, then “performing” as a mini-stage. Here are the photos. Fantastic Ape! 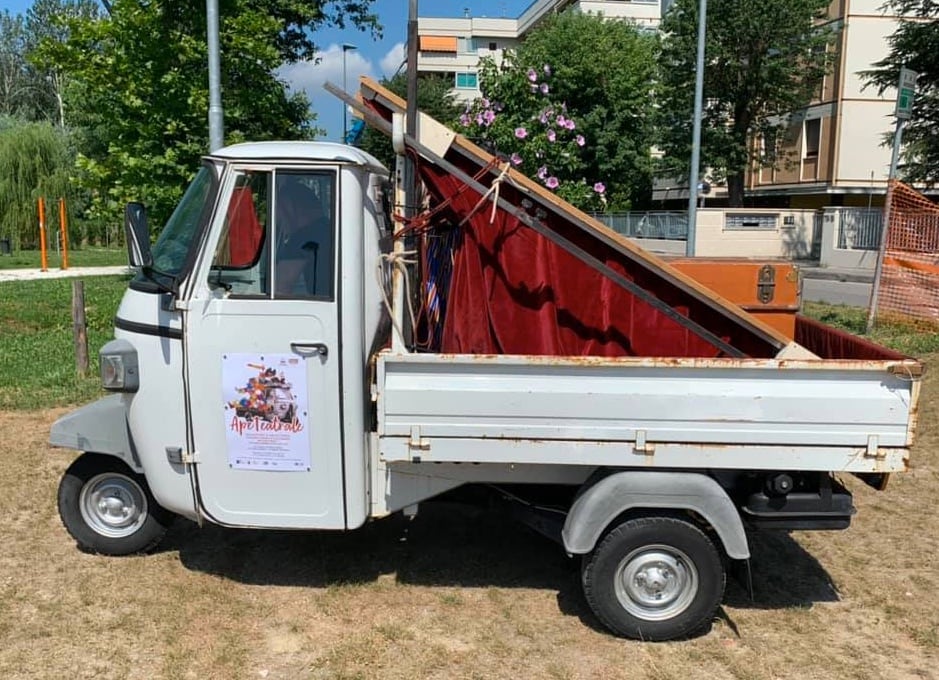 Ape Teatrale is an idea of Marco Brinzi (editor’s note: in the photo above) and Caterina Simonelli.