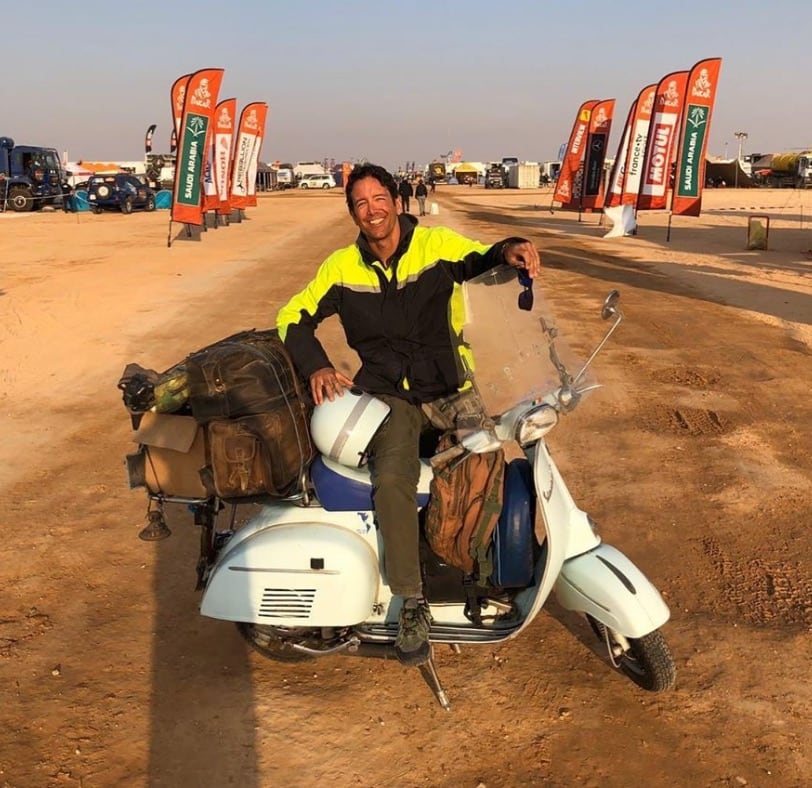 150 THOUSAND KM AROUND THE WORLD, 3 YEARS ON THE ROAD ASTRIDE HIS BELOVED VESPA GT “ARDIMENTOSA”. HE EVEN ARRIVED AT THE DUNES OF DAKAR IN SAUDI ARABIA WITH HER. AND THE VOYAGE CONTINUES...

January 2020 – An irresistible urge for “elsewhere”, a passion for discovering new places, people and cultures, an old, romantic and reliable companion in his adventures, a blend of courage and a taste for challenge, great relation skills and the ability to adapt to any condition. The protagonists of this story are a seasoned solitary traveller and an elegant vintage Vespa Gran Turismo with two-tone saddle, more than 50 years old, ridden with grit. He is Ilario Lavarra, 37 years old from Milan, and she is a 1968 Vespa GT called Ardimentosa. Chosen because, as he explains, Vespa is known and common all over the world. No matter where you go, you can find Vespista friends ... and parts! And above all, he adds, he chose it because he loves its unmistakeable line. In short, it was also an “aesthetic choice”, he says. 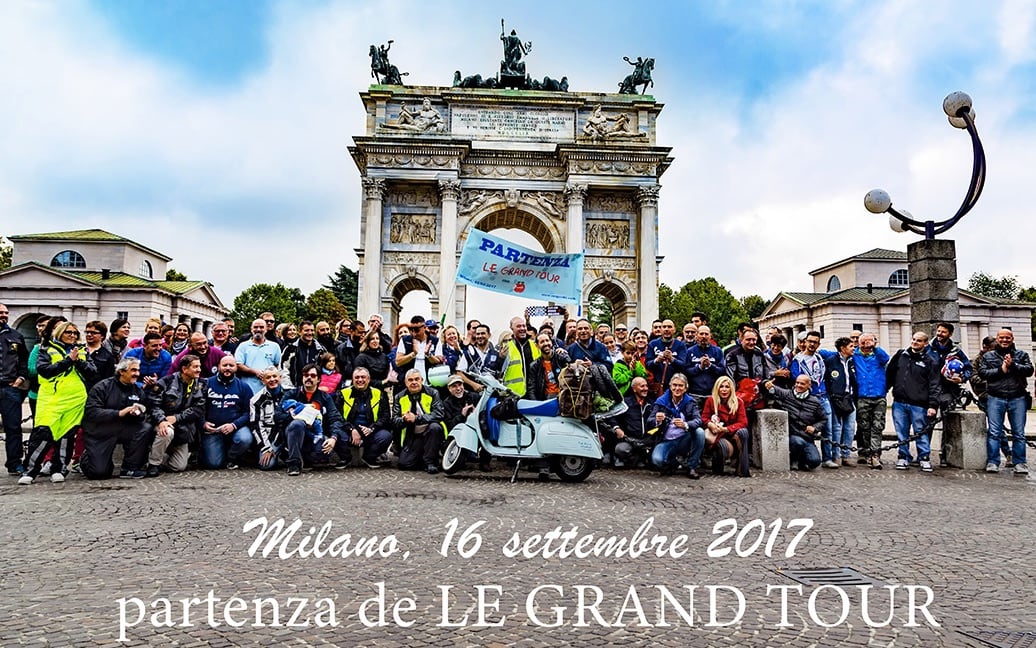 Together, we departed in September 2017 from Milan for “The Great Tours”: three years of travel, more than 150 km around the world. Thrills, unforeseen hitches (“because of the strong side wind, the Vespa consumed twice as much!”), regrets (not having added the rear luggage rack) and, above all, a great sense of freedom. Ilario and Ardimentosa are in their third year of travels... and the adventure continues.

IN SAUDI ARABIA, 18 January 2020 – Ilario recounts on his Facebook page: “I didn’t think I would visit Saudi Arabia. Until a very few months ago, it was off-limits, extremely difficult to enter as a tourist. At the most, if you were lucky, you could obtain a five-day transit visa. Not exactly a ton of time if you consider how vast it is. Instead, events brought me precisely to this country, all to be discovered, boundless like its deserts. Here I had the thrill of experiencing a bit of the Dakar raid. It is not an easy territory and perhaps this is why it is more interesting. And the, when I watch Ardimentosa cruise through rather unexplored latitudes, well, I swell up with pride in a Vespa which, in its own small way, is doing something enormous. Full speed ahead, always!”

A STOP AT THE DAKAR RAID. “Happy as a lark for having gotten a taste of my second Dakar in Saudi (after the 2011 in Argentina) ...I’ll tell you a bit about this enormous country that is Saudi Arabia, where for the first time in history, a Vespa emerges…” During his stay between the Dakar 2020 team “paddocks” (which was held from 5 to 17 January, 42nd edition, for the first time in Saudi Arabia), Ilario took advantage of the opportunity to have a tune-up done on his Vespa (of which he says he is jealously protective). There was certainly no lack of mechanics: people accustomed to ratcheting on rather tough vehicles, but who proved to be just as professional in doing a check-up on the Vespa (carried out by the KTM technical team, a brand that has won no less than 18 consecutive editions of the Dakar).

Report from importer Darwazeh Motors: “Watch this video that Red Bull Motosports made when we were in Dakar Saudi Arabia last week ... it’s of Ilario’s adventure on his VESPA to reach Dakar traveling around the world ... Cool material and inspiration for passion of Vespa!” (TAMER DARWAZEH). 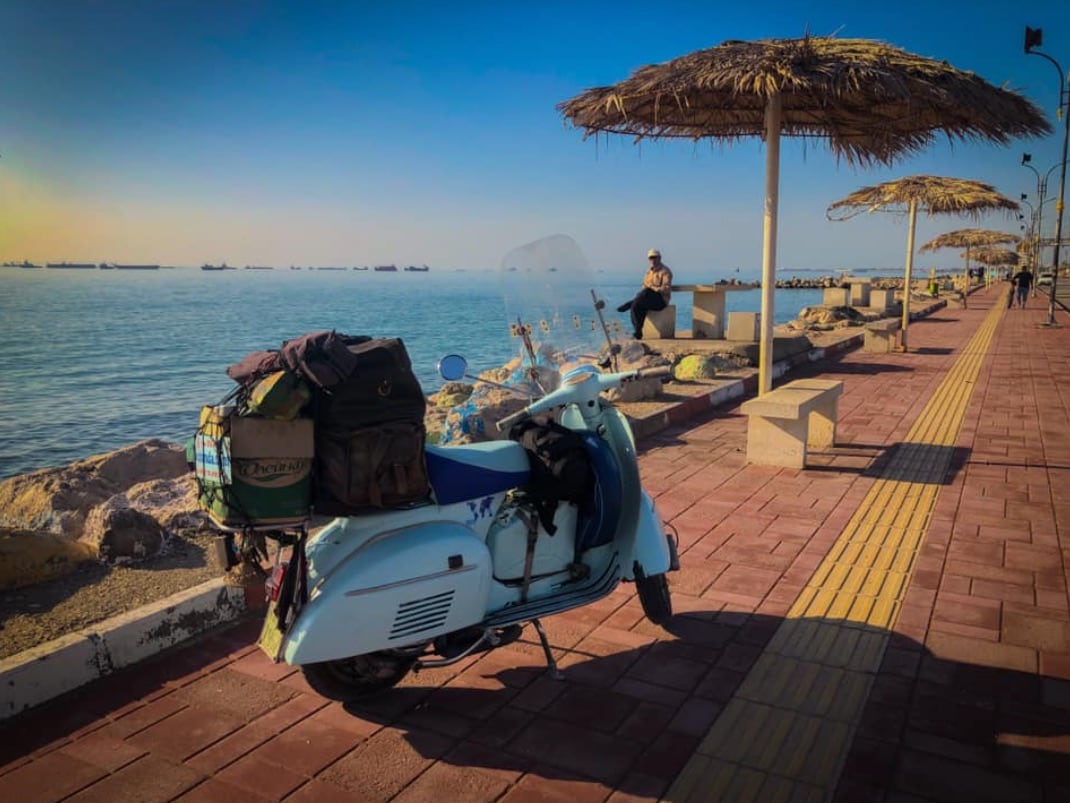 During the trip, Ilario has met Piaggio Group importers: Darwazeh Motors (Jordan) and Wheels of Arabia (Saudi Arabia). And numerous worldwide Vespa clubs, also racking up dozens of articles, interviews and TV broadcasts dedicated to his fantastic trip on a Vespa.

EXTRAORDINARY: VESPA AT MADA’IN SALIH, THE FIRST TO ENTER IN THE ARCHEOLOGICAL SITE, UNESCO WORLD HERITAGE. 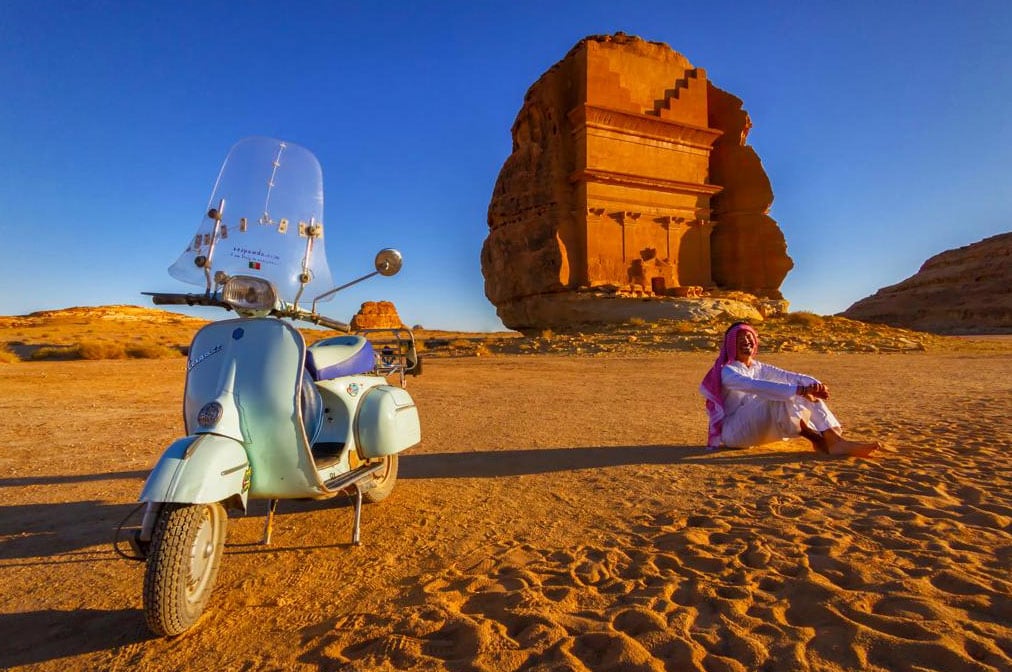 The importer Tamer Darwazeh (Darwazeh Motors, Jordan) writes us: “IIario Lavarra has comes up to the most important archeological site in Saudi Arabia, an Unesco world heritage site called Mada’in Salih. This place is now open from 4 months for world visitors and he made a lot of effort to be allowed to take his (it is necessary a special permission to visit the site). Vespa (photo above, editor’s note) has been the first and last ever to enter. Mada’in Salih is considered to be one of the world’s most fascinating sites for antiquities. It contains numerous tombs carved into the rock (in the photo below, editor’s note), datable between the I century BC and the II century AC. 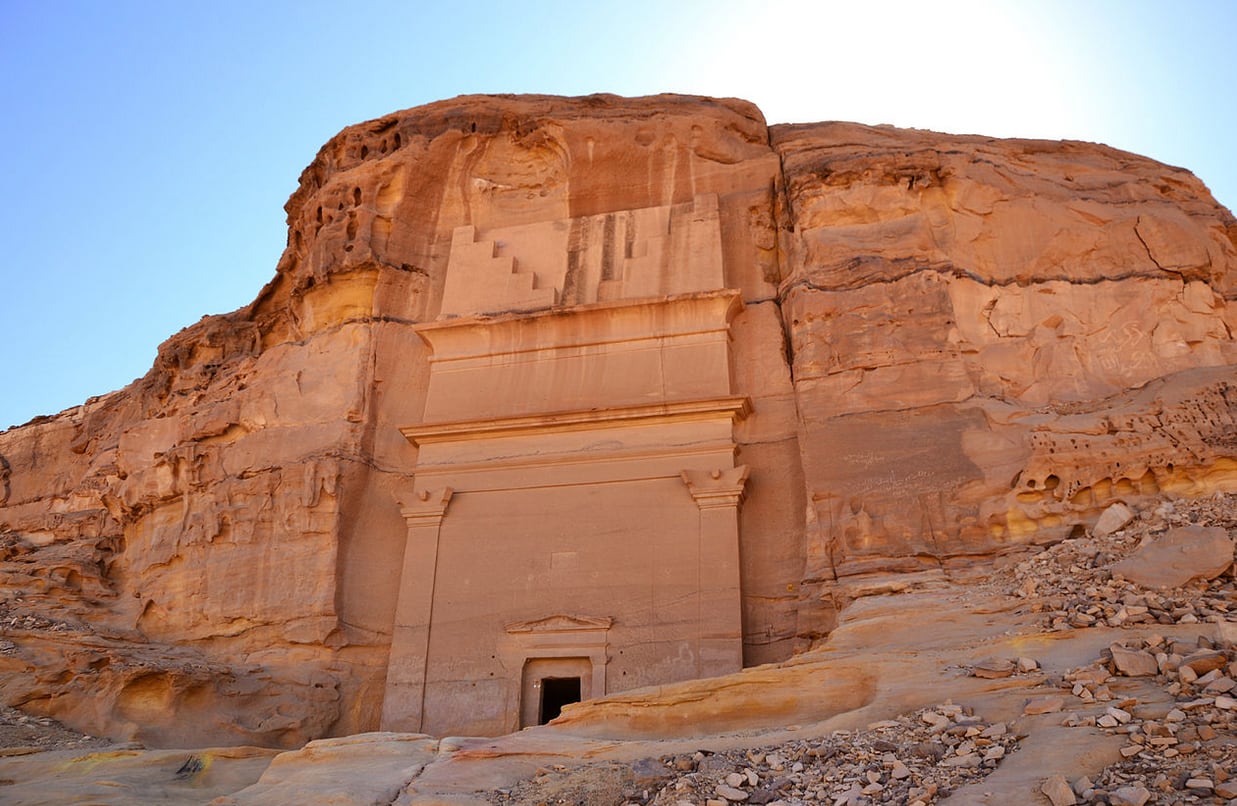 It’s close Al-‘Ula town, in the north region of Saudi Arabia. Mada’in Salih has been open to the public just for five weeks! And Ilario, during its world longest Vespa tour ever, had a very special permission to get in with his Vespa, marking a real record having been the first two-wheeled vehicle ever to enter in Mada’in Salih”. And probably the last one. In 2008, UNESCO registered Madāʾin Ṣāliḥ among the heritages of humanity, making it the first recognized heritage of Saudi Arabia. The site, protected by UNESCO, is considered second only to the famous Petra (Jordan) for its Nabatean ruins (the Nabateans were merchants of ancient Arabia).

ONE HUNDRED THOUSAND KM! 13 December 2019. Ilario writes: “One hundred thousand kilometres (and 70 countries). Two and a half times around the world. Numbers. That express the idea of the container and not of what it contains. And I am delighted with this Vespa, this Ardimentosa, which, metre after metre, is gliding over the world. Slowly, merrily. And I with her. Over the icy tundra of Scandinavia with the Northern Lights in the background. Over the autumnal warmth of the western Saharan deserts of Africa. Over the dirt roads of Bissau and Conakry. Over the Atlantic coast all the way to Nigeria.

Over the war of Cameroon and the rainforests of Gabon and the Congo. Over the stone colours of Namibia and the whale watching of South Africa. Over the burnt Savannah of the east, the shanty villages and banana groves of the thousands of hillsides. Over the hot silence of lava rock on the Horn of Africa, the Coptic monasteries, the pyramids. Over the Fairy Chimneys and the almost 500-metre peaks of central Asia. Over the snows of the kingdom of Persia and now on the gulf before the Arabian Peninsula. One hundred kilometres. Olè!”

ILARIO IN BAHREIN, GUEST OF THE IMPORTER WHEELS OF ARABIA.
AND THE JOURNEY CONTINUES ... 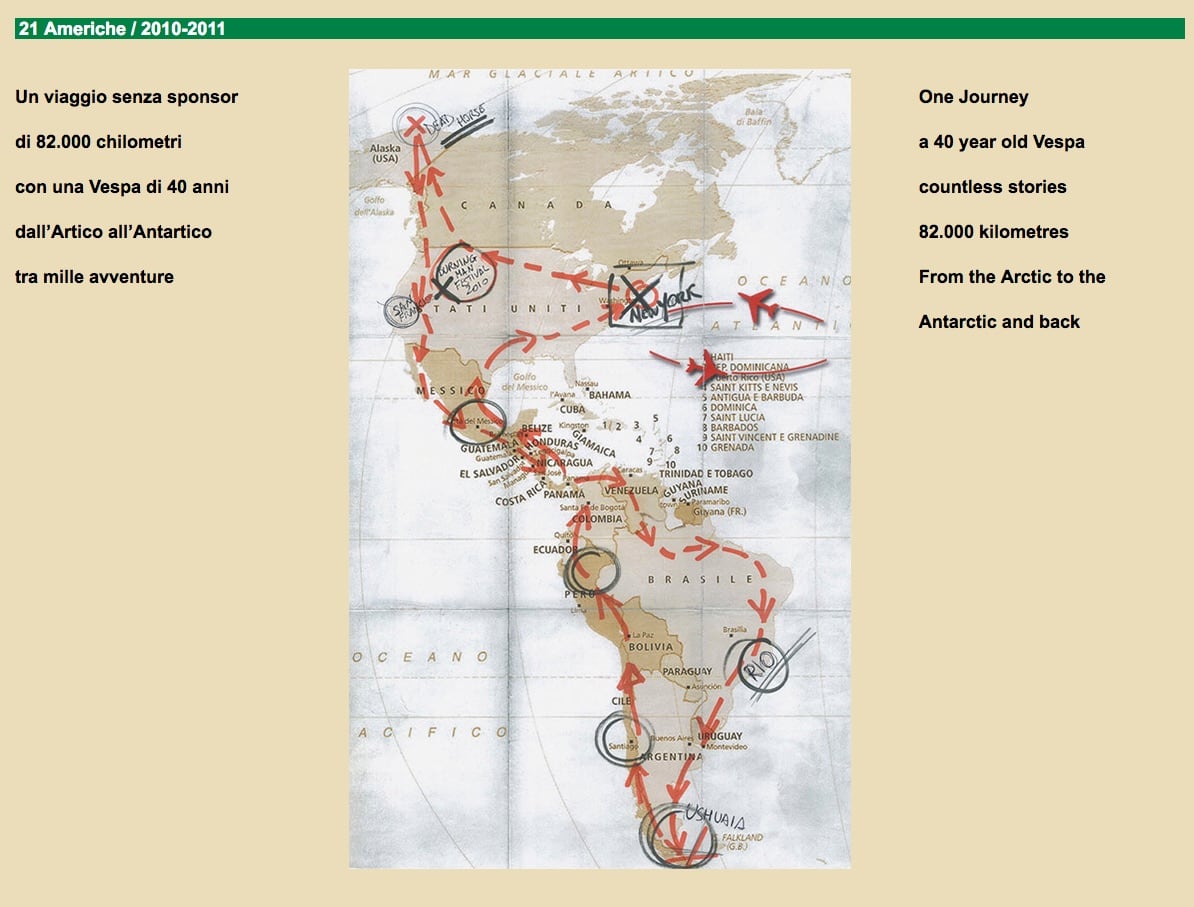 THE PREVIOUS TRIP: FROM THE ARCTIC TO THE ANTARCTIC. Ilario Lavarra’s previous ride on the road – also by himself, 18 months and more than 80 thousand km, also on a vintage Vespa, “Vespa Corazzata” (on display at the Piaggio Museum in Pontedera, Pisa) - was on the American continent, with adventures and misadventures, falling into the great tradition of globetrotters on a Vespa, who consider travelling an opportunity for personal growth and freedom.

Out of that tour came the book, written by Ilario Lavarra and already reprinted, entitled “21 Americhe” (21 Americas) (Ultra editions).