ABOARD THE CAVOUR AIRCRAFT CARRIER, MOTO GUZZI AND THE ITALIAN NAVY CELEBRATE THEIR CLOSE TIES, STARTING WITH THE EAGLE SYMBOL

THE OCCASION SAW THE WORLD PREVIEW OF THE V100 MANDELLO AVIAZIONE NAVALE, A LIMITED EDITION OF 1913 NUMBERED MOTORCYCLES. PACKED WITH TECHNOLOGY, THE LATEST ARRIVAL IN THE MOTO GUZZI FAMILY FEATURES A UNIQUE LIVERY INSPIRED BY THE F-35B FIGHTERS, MAKING IT THE MOST STRIKING MODEL IN THE V100 RANGE.

Civitavecchia (Italy), 21 September 2022 – On the spectacular stage of the flight deck of the Cavour aircraft carrier, Moto Guzzi and the Italian Navy have celebrated the close ties that have united them for more than one hundred years.

The spread-winged eagle, the unmistakeable emblem of Moto Guzzi since it was established in 1921, dates back to the military service of the company's founders, Carlo Guzzi and Giorgio Parodi, in the Italian Royal Navy’s Aeronautical Arm in World War One. It was during the war that the two friends, and pilot Giovanni Ravelli, decided to go into motorcycle manufacturing once the conflict ended. Ravelli was killed in an accident in 1919 and was unable to achieve his dream. Guzzi and Parodi chose the Eagle as their symbol in memory of their companion. 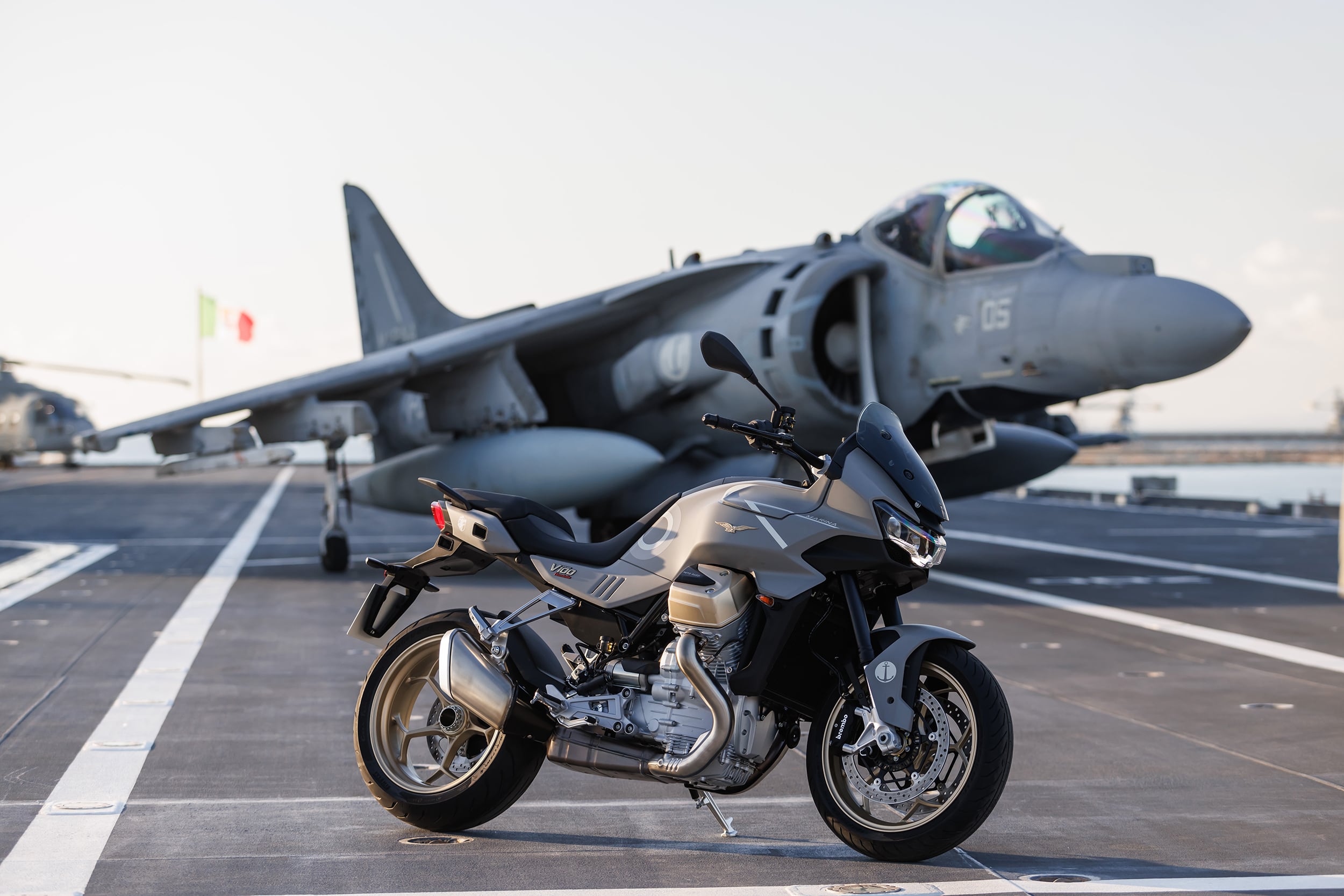 The event was an emotional occasion, which included the world preview of the Moto Guzzi V100 Mandello Aviazione Navale, a special numbered limited-edition of the latest arrival in the Moto Guzzi family. A technology-rich motorcycle made even more striking in this exclusive version uniting two great names with indissoluble ties to the history of Italy.
The project was made possible thanks to Difesa Servizi S.p.A., an in-house company of the Italian Ministry of Defence responsible for optimising the Department’s assets over the last 10 years, which granted Moto Guzzi use of the “Aviazione Navale” mark for the production of the V100 Mandello Aviazione Navale.

Produced in a limited edition of 1913 numbered motorcycles, a tribute to the year in which the aviation arm of the Italian Navy was formed, the exclusive Moto Guzzi V100 Mandello Aviazione Navale is a unique model, starting with its special livery inspired by the Navy's
F-35B fighter jets. The graphics are a faithful reproduction of those of the aircraft, with the insignia on both sides of the cowl, together with the typical “jet intake” stripes. The livery is enhanced by a low-visibility tricolour rosette on the sides of the fuel tank, the emblem of the Italian Naval Aviation, and the logo of the Boarded Aircraft Unit.
Standard features include a tyre pressure monitoring system and heated handlegrips, while the serial number is laser etched on the handlebar riser. Each one of the bikes comes with its own cover and a commemorative plaque.

Moto Guzzi V100 Mandello. The Moto Guzzi V100 Mandello opens a completely new chapter in the company's history; it eludes conventional categorisation, combining brilliant performance with the vocation for travel that lies at the heart of every Moto Guzzi two-wheeler.
This is a Moto Guzzi like never before, whose cutting-edge technology and innovative technical and aerodynamic solutions open the door to the future of the brand. The V100 Mandello is an innovative bike starting with the design which, as always, enhances the unique, inimitable twin-cylinder engine. Lines that eschew nostalgia, offering a modern take on the key elements of the Moto Guzzi stylistic idiom. A watershed in the brand's history, the bike introduces many important technological innovations: the first two-wheeler with adaptive aerodynamics, the first Moto Guzzi model to feature a six-axis inertial platform, ABS cornering, semi-active suspensions and a quick shift, to name just the most important. 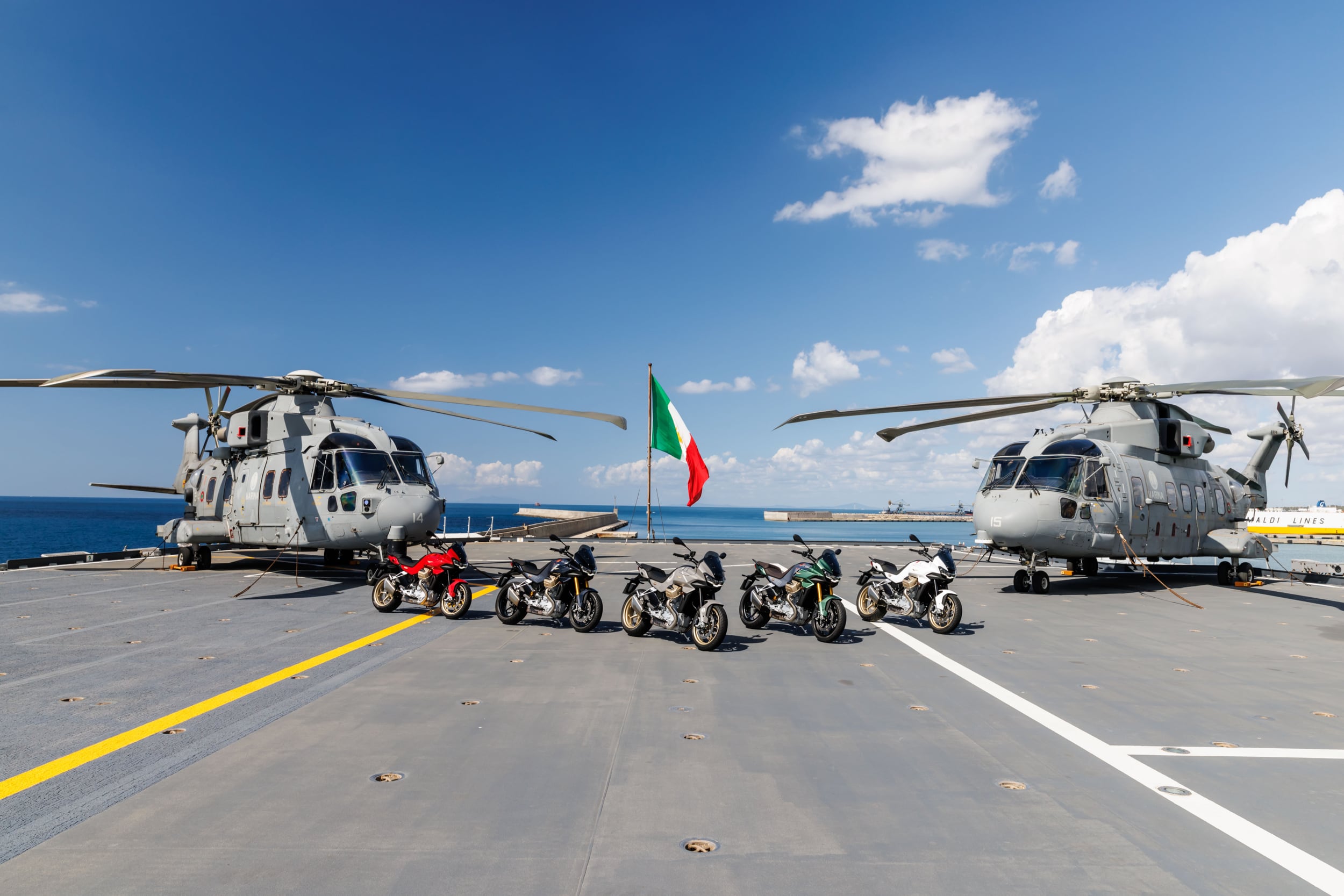 The V100 Mandello is also the first Moto Guzzi bike powered by the new compact-block engine with sophisticated technical characteristics. Tradition is maintained by the 90° V-twin architecture, which guarantees Moto Guzzi’s unique torque delivery and inimitable sound, but the project is completely new and offers impressively brilliant performance: power of 115 hp and torque of 105 Nm, with 82% already available at 3,500 rpm. 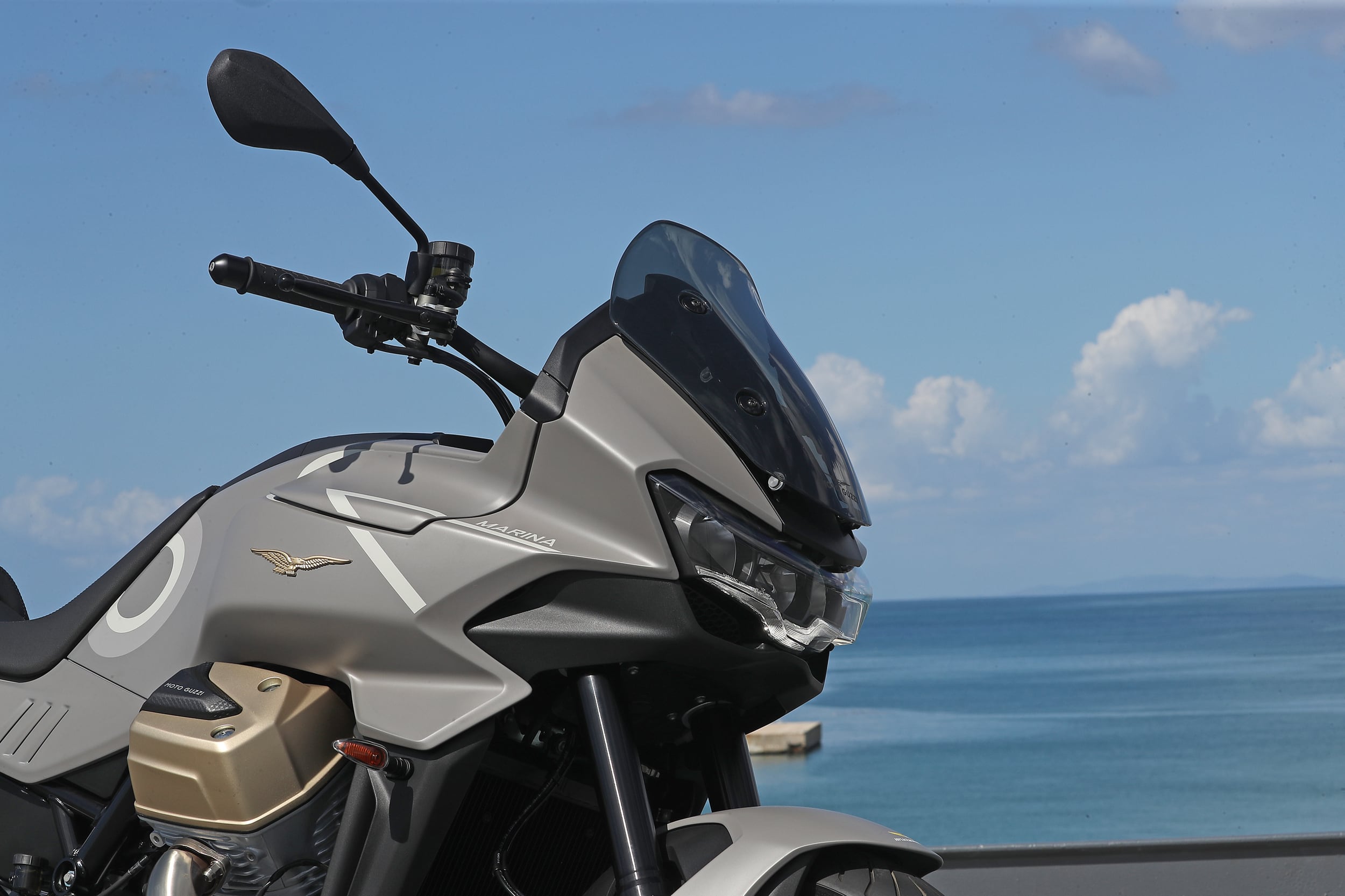 Naval Aviation. Italy's Naval Aviation – Aviazione Navale – is the air component of the Italian Navy, created to operate at sea in close contact with its ships. Its origins date back to 1913, when the Aeronautical Service of the Royal Navy was officially formed.
The Navy's aviation units are currently headed by the COMFORAER Air Forces Command, which is responsible for the organisation and coordination of the activities of all the Navy’s aircraft, including maintenance, management of logistics infrastructure and training for flight and ground personnel. Its fixed-wing aircraft and helicopters are boarded on vessels equipped with hangars and a flightdeck, on amphibious assault units and on aircraft carriers.
Since the 1980s, Italy's Naval Aviation has been involved in all the main international operations.
The Cavour aircraft carrier. The Cavour (CVH 550) is a short take-off and vertical landing aircraft carrier, built by Fincantieri. It entered service for the Italian Navy in 2009.
With an LOA of 244 metres and 220 metres of runway, the Cavour is the Italian Navy's flagship, and one of the most important technological investments of the country's national defence system. The Cavour is able to board and operate with all the aircraft used by the Italian Navy: helicopters (AB 212, EH 101, NH 90), AV-8B aircraft and latest-generation aircraft such as F-35B fighters. The flight deck extends from bow to stern with a runway parallel with the carrier’s longitudinal axis and a ski-jump, to ensure that aircraft can take off with the maximum payload. The hangar is designed to hold up to 12 helicopters or, alternatively, 8 aircraft. Handling operations between the hangar and the flight deck are managed by two 30-tonne elevators. The Cavour is manned by a fixed crew of 550 sailors and can accommodate up to 1,200.
Difesa Servizi S.p.A. Difesa Servizi S.p.A. is the in-house company of the Italian Ministry of Defence responsible for managing and optimising the Department's assets. On the market, it provides services for a variety of national and international stakeholders. Since it was established in 2011, the company has met the need for innovation and promoted the unique values of the Italian Armed Forces, operating in a multiplicity of sectors through meticulous economic management of the defence assets and services entrusted to it.
Difesa Servizi S.p.A. offers a range of goods and services such as economic management of real estate and assets, excluding disposal; environmental optimisation of military units for the production of energy from renewable sources; promotion and economic management of the operations and services provided to third parties by the Armed Forces in the meteorological, health, merchandise, geo-cartographic, aerial and satellite photography sectors; brand optimisation through the temporary paid concession of the logos, denominations and distinctive signs of the Armed Forces; promotion and invoicing of technical activities and services, including those relating to the Ministry's industrial and production activities, for which a special mandate has been conferred on national and international bodies in the public and private sectors.
Established in March 2010, it began operations in the second half of 2011. 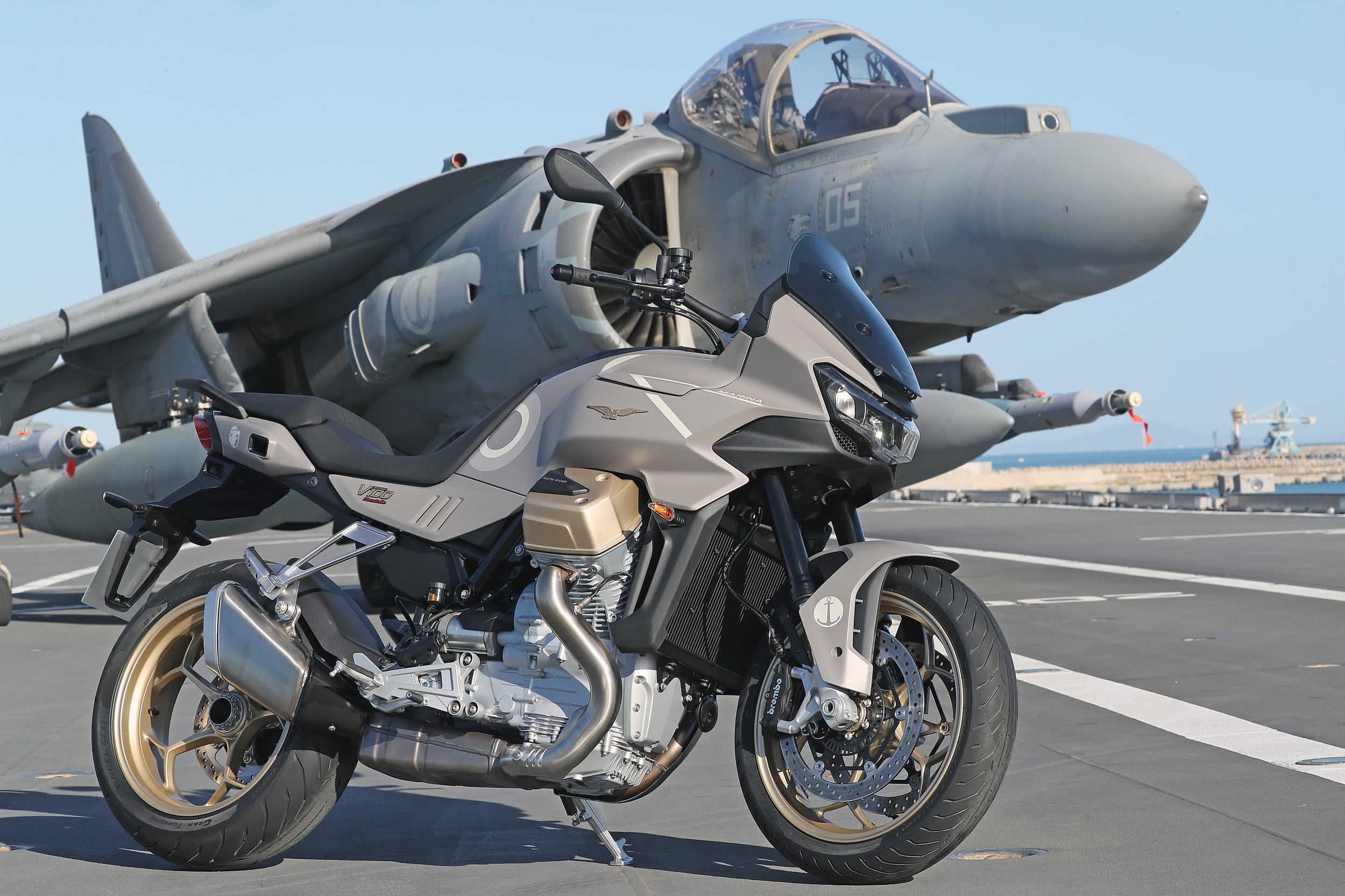