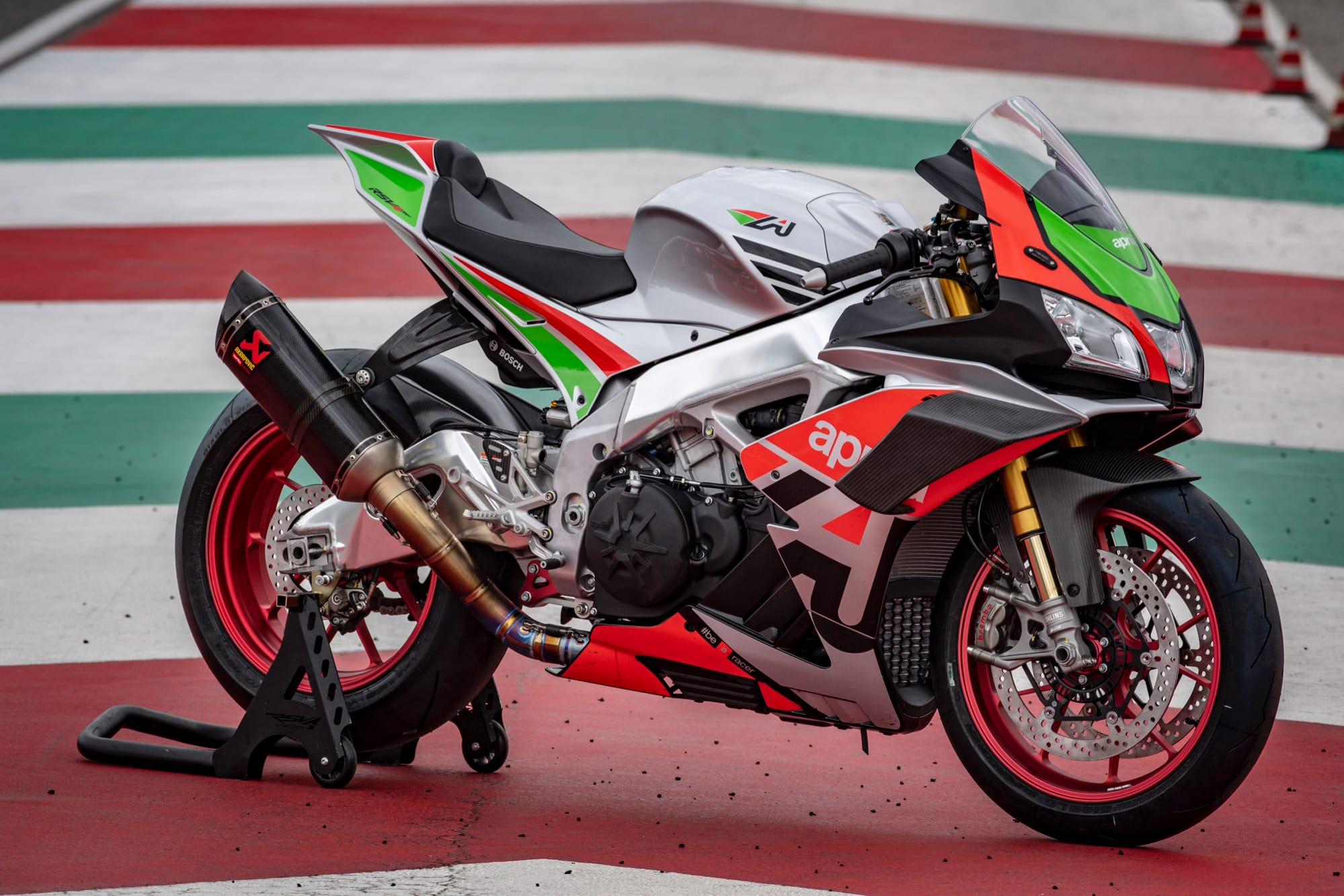 APRILIA RACING EXPANDS THE FACTORY WORKS PROJECT, INTRODUCING A SPECIAL KIT FOR THE RSV4 THAT INTERVENES IN THREE AREAS: ENGINE, WEIGHT AND AERODYNAMICS. POWER INCREASES TO 215 HP, WEIGHT DROPS 10 KG AND THE AERODYNAMIC WINGLETS ARRIVE, THE RESULT OF THE STUDY CONDUCTED FOR MOTOGP. 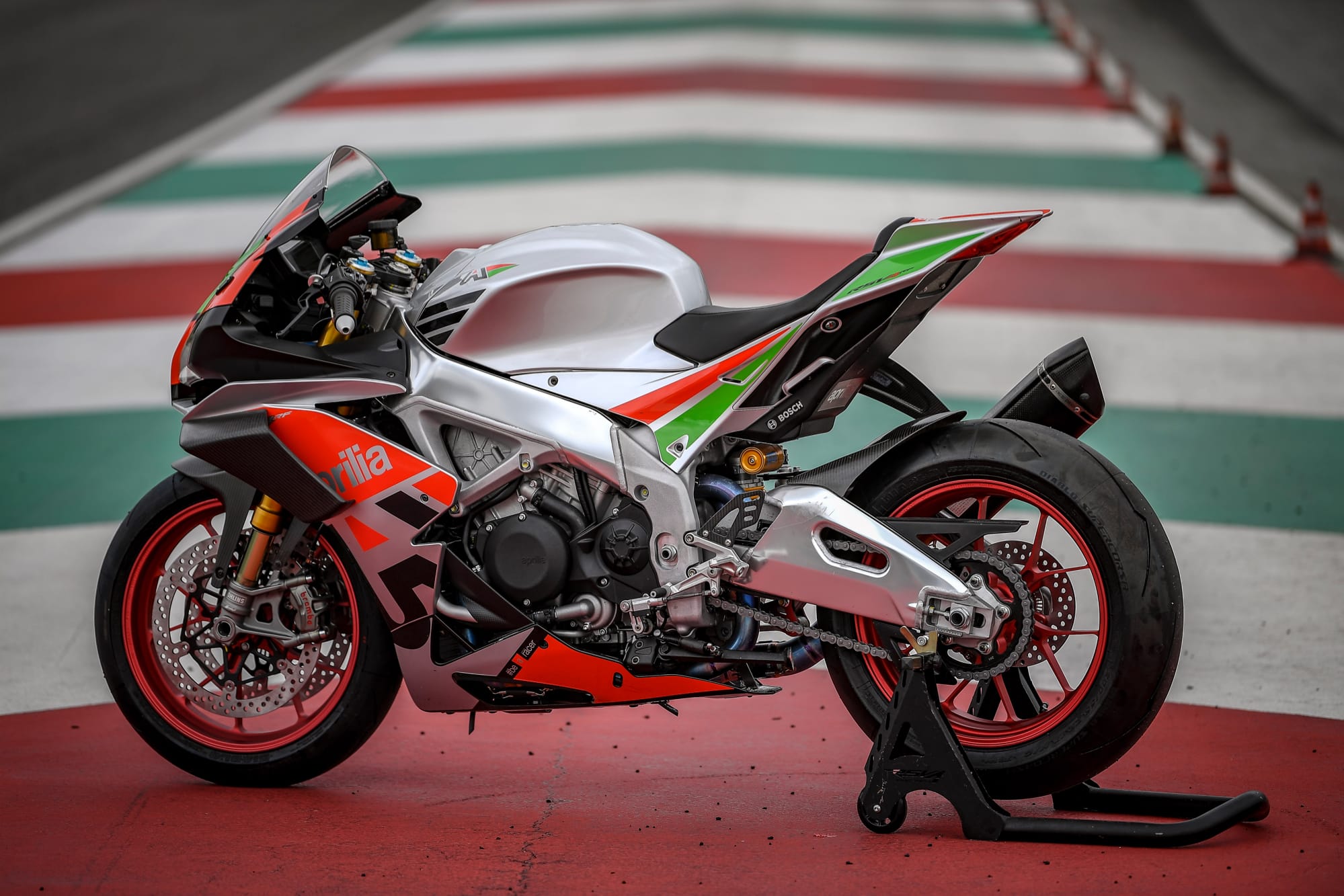 Aprilia Racing is the most advanced Piaggio Group platform for the development of technology applied first to racing bikes and then to factory models. The Racing Division that has brought the Noale-based Italian Manufacturer 54 world titles, launched the "Factory Works" programme last year to make the same technology developed for the Aprilia RSV4 – seven-time World Superbike champion – available to anyone who wants to compete in top level factory derivative championships or for those who simply want to have an RSV4 with optimised performance for track use.

The programme includes the realization of various RSV4 “Factory Works” versions developed in compliance with the Superstock and Superbike championship regulations in the different countries, with various levels of chassis, electronics and engine modifications. The pinnacle of this project is represented by the FW-GP version, fitted with the V4 with bore increased to 81 mm and equipped with pneumatic valve timing, a configuration similar to the one Aprilia raced with officially in the 2015 MotoGP world championship which takes maximum power to 250 HP.

Aprilia Racing Factory Works is therefore a unique programme that now expands thanks to the introduction of a special kit available for the Aprilia RSV4 – in the RR and RF MY17 and MY18 versions – capable of maximising engine performance, reducing overall weight and improving aerodynamics. 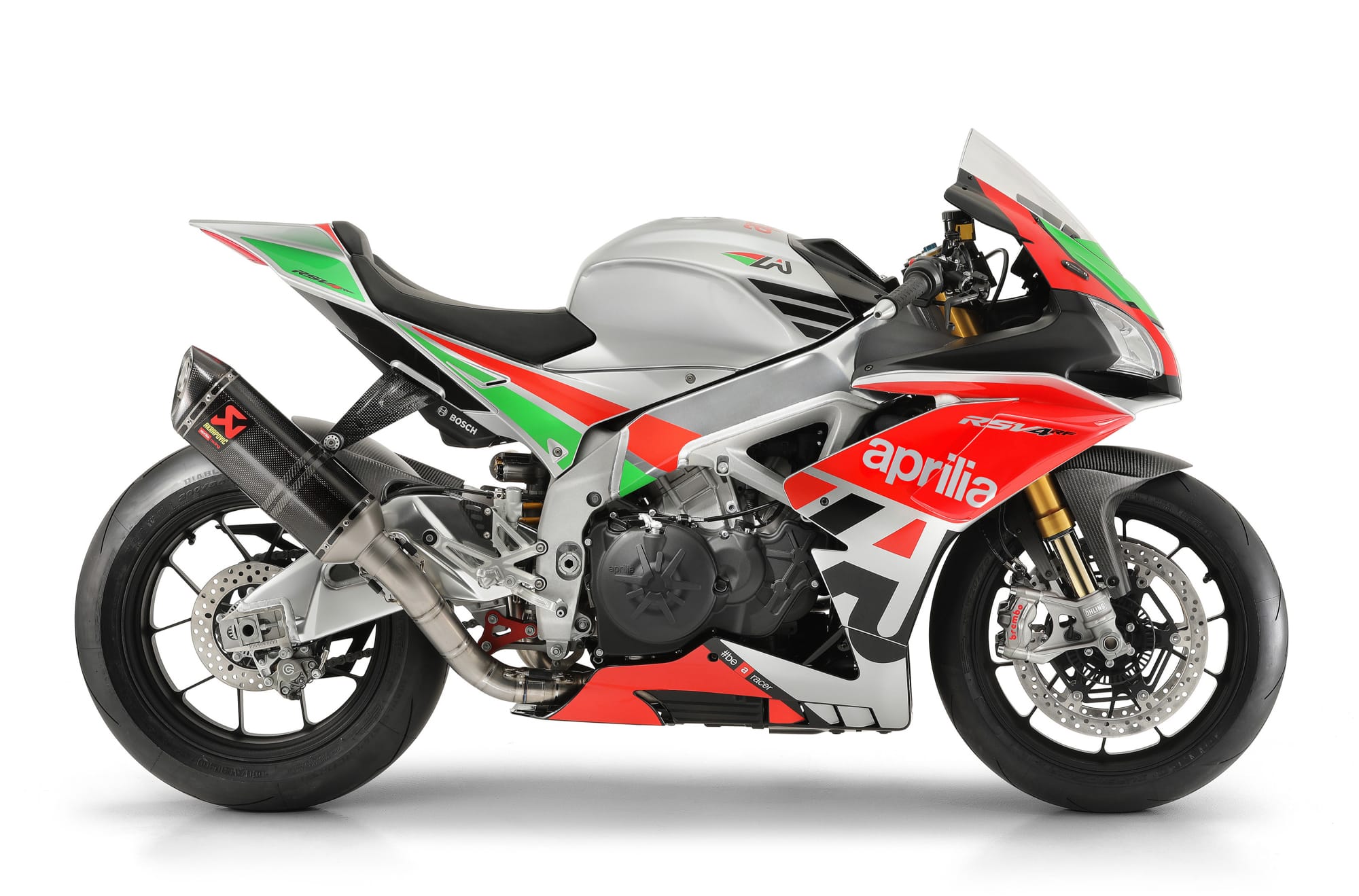 As for the engine, the kit includes a set of four single-groove pistons with a surface treatment to guarantee smoother action. These components alone ensure about a 4 HP increase in maximum power. In order to further increase performance, a cylinder heads kit is also available which replaces the original heads with new ones that boast numerically controlled machined intake and exhaust ducts in order to improve fluid dynamics; the springs, valves and related caps have also been optimised to fine-tune performance, while the camshafts have a surface treatment that further reduces friction. Overall, along with a new ECU that has a specific map for the Akrapovic exhaust, the complete kit lets you reach a maximum power of 215 shaft HP.

Aprilia Racing's experience can also be measured through targeted lightening operations, primarily to the advantage of handling, which is already outstanding on the standard RSV4 model. These operations consist in the installation of a lithium battery and a new fuel tank with the same shape and material as the original, but made using a refined production method that reduces the weight by about 1.5 Kg. The complete Akrapovic exhaust system, the various carbon fibre details and the billet upper steering plate reduce the overall weight of the RSV4 by about 10 Kg.

The new Factory Works kit can be further enriched by a set of side fairings with winglets, the aerodynamic appendages that contribute to producing benefits in terms of bike stability. This is technology that Aprilia Racing developed on the RS-GP prototype used in the MotoGP World Championship and which, for the first time ever, is now also available to Factory Works customers.

For EICMA 2017, the new Factory Works kit has been presented on the Aprilia RSV4 RF, enhanced by a special, dedicated livery. 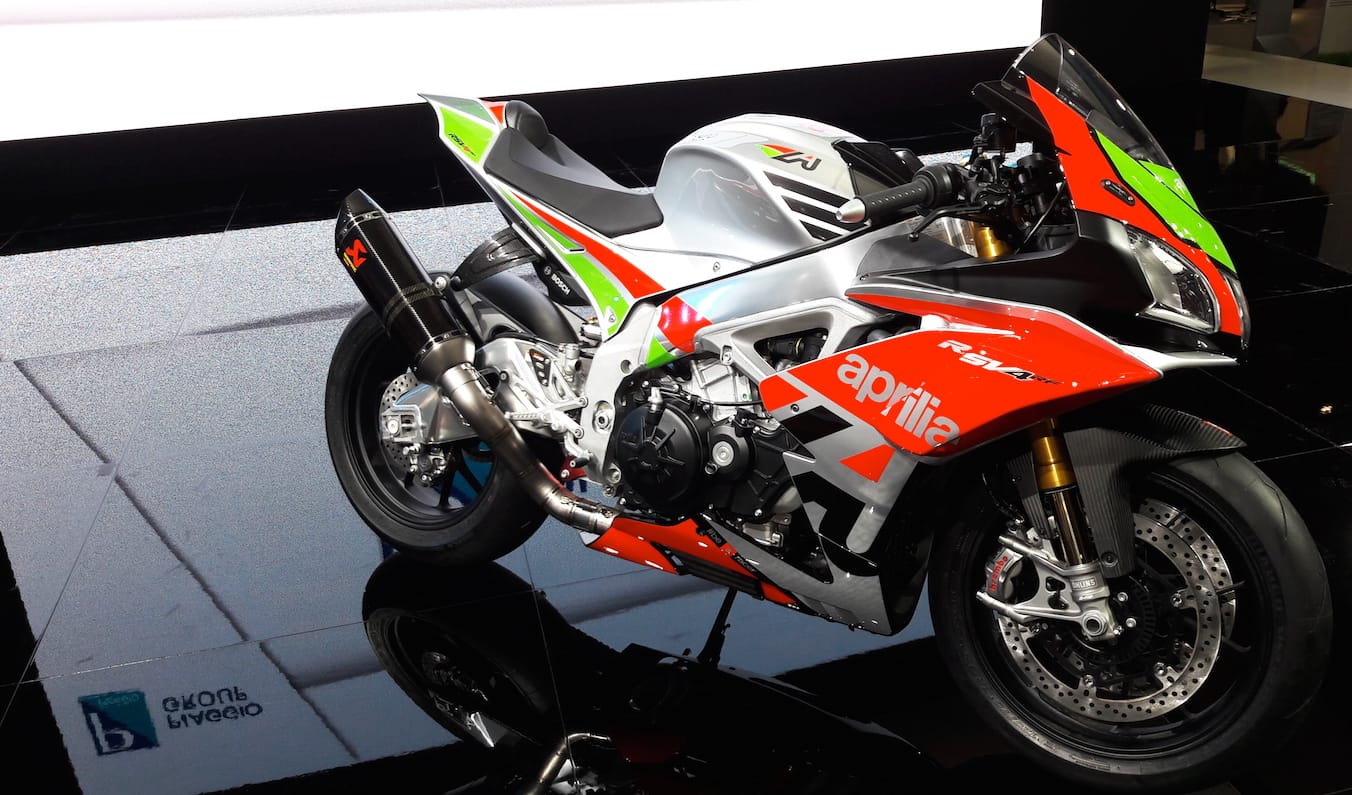 In the special web area www.serviceaprilia.com/public/racing, riders, collectors and teams can access the exclusive world of the Aprilia “Factory Works” racing bikes and receive further information and more technical details on the RSV4 machines prepared by Aprilia Racing. 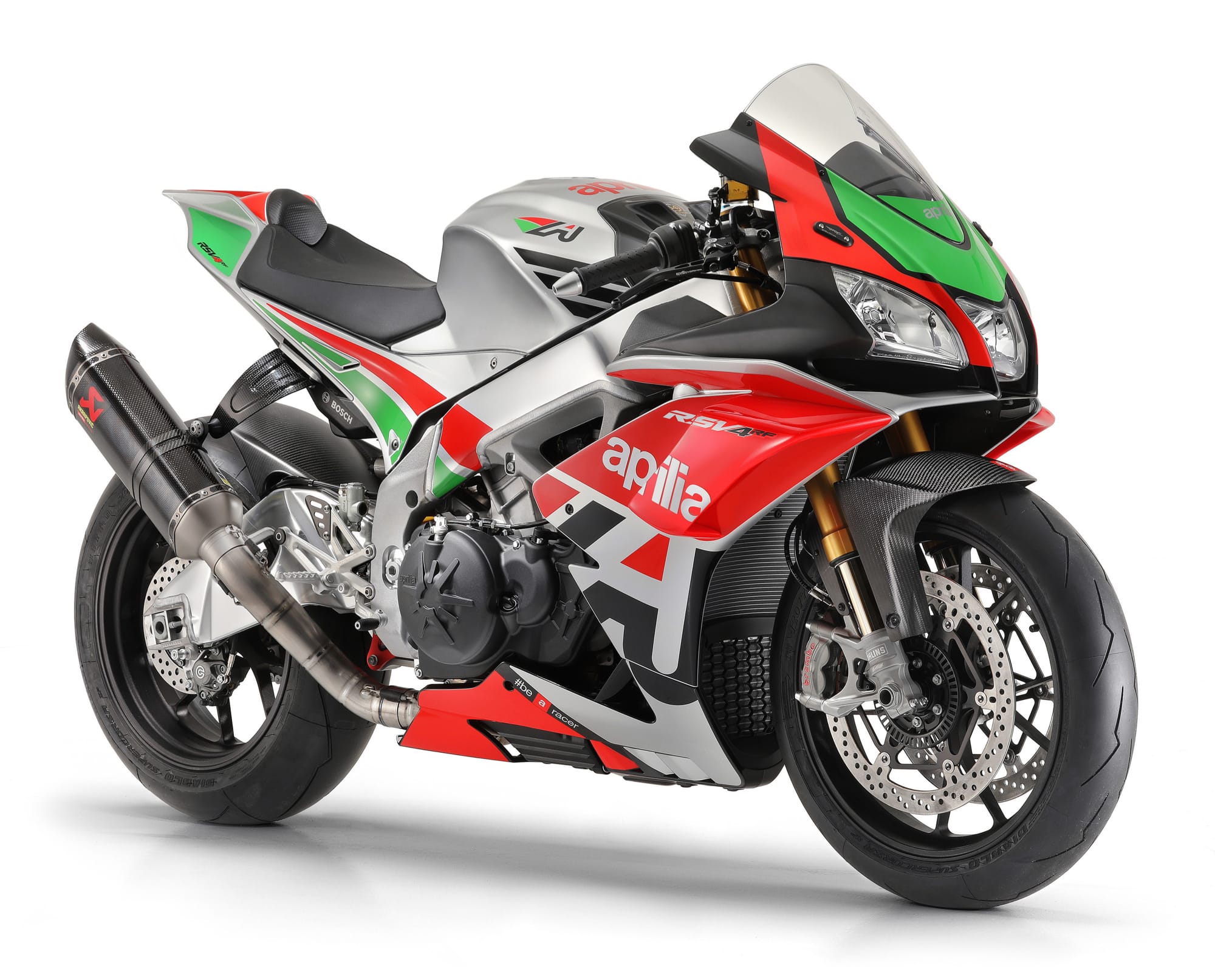