APRILIA RS 660 LIMITED EDITION: TRIBUTE TO THE VICTORIES IN THE TWINS CUP-MOTOAMERICA CHAMPIONSHIP 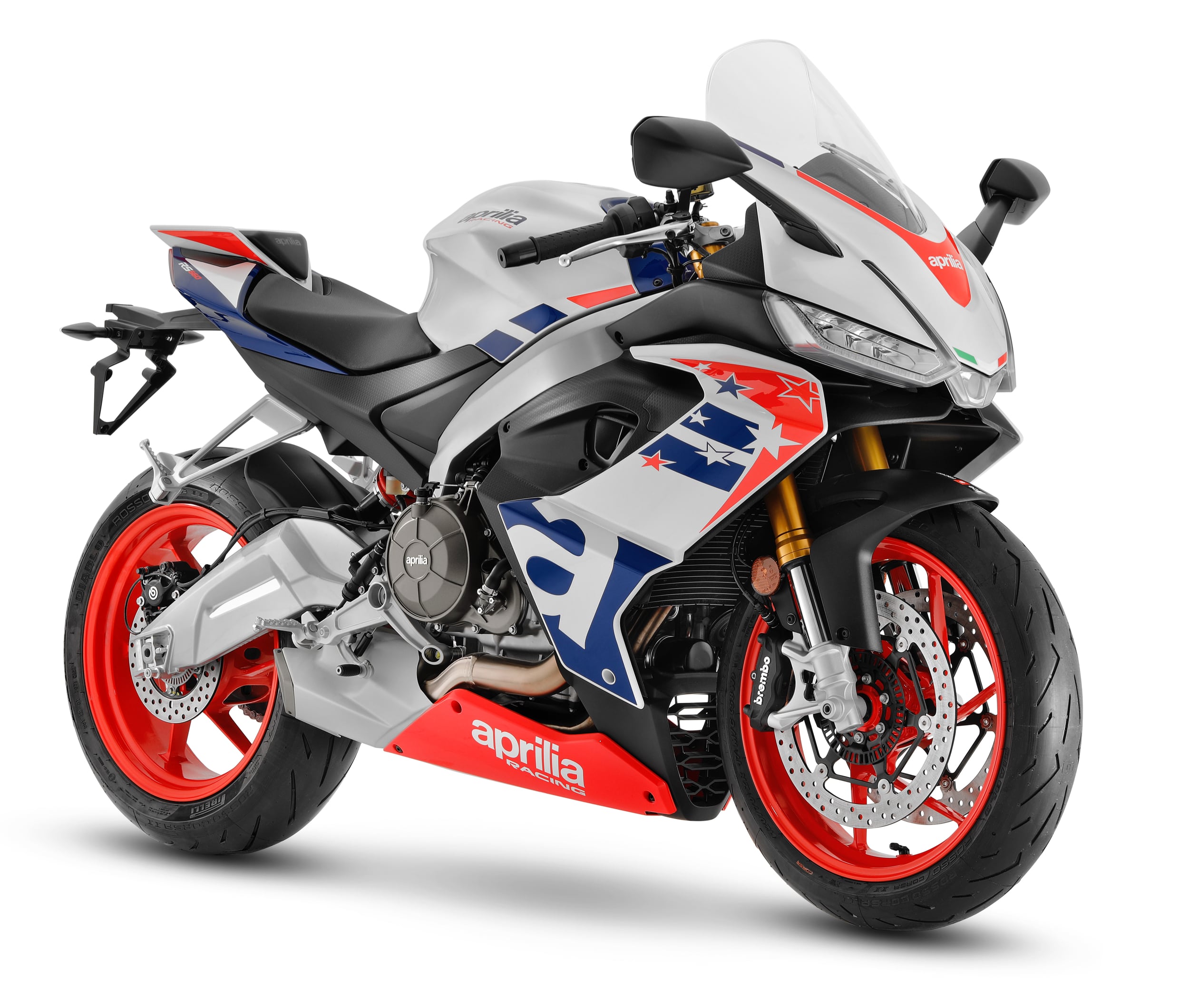 IN ITS FIRST TIME PARTICIPATING, RS 660 DOMINATES IN MOTOAMERICA. A SPECIAL STARS AND STRIPES LIVERY CELEBRATES THE TRIUMPH OF THE MEDIUM SIZED ITALIAN SPORT BIKE IN THE PRESTIGIOUS AMERICAN CHAMPIONSHIP. 1,500 NUMBERED UNITS WITH RACING PACKAGE AS STANDARD EQUIPMENT TO INCLUDE SINGLE-SEAT TAIL-FAIRING COVER, OVERSIZED TOP FAIRING, AND QUICK SHIFT WITH UPSIDE-DOWN GEARBOX.

Milan (Eicma), 24 November 2021 - A year after its launch on the market, Aprilia RS 660 is already celebrating its first important sports milestone. The medium-sized Italian sport bike made this achievement in the United States, dominating the 2021 edition of the Twins Cup, the prestigious American championship dedicated to medium engine capacity twin-cylinders within MotoAmerica, the premier motorcycle racing series in the States.

In celebration of this victory, at EICMA 2021, Aprilia introduces a numbered special edition of 1500 units of RS 660, characterised by a brand new stars and stripes livery inspired by the American flag. A colour scheme closely derived from the special graphics on the bike that the Twins Cup champion, Kaleb De Keyrel, rode in the race at Vallelunga for the final round of the Aprilia RS 660 Trophy, where Kaleb had been invited to participate as a reward for his important victory on American soil (he is in the right background picture of this article, with the RS 660 with special livery. Here the article related:
wide.piaggiogroup.com/articles/racing/finale-del-trofeo-aprilia-rs-660 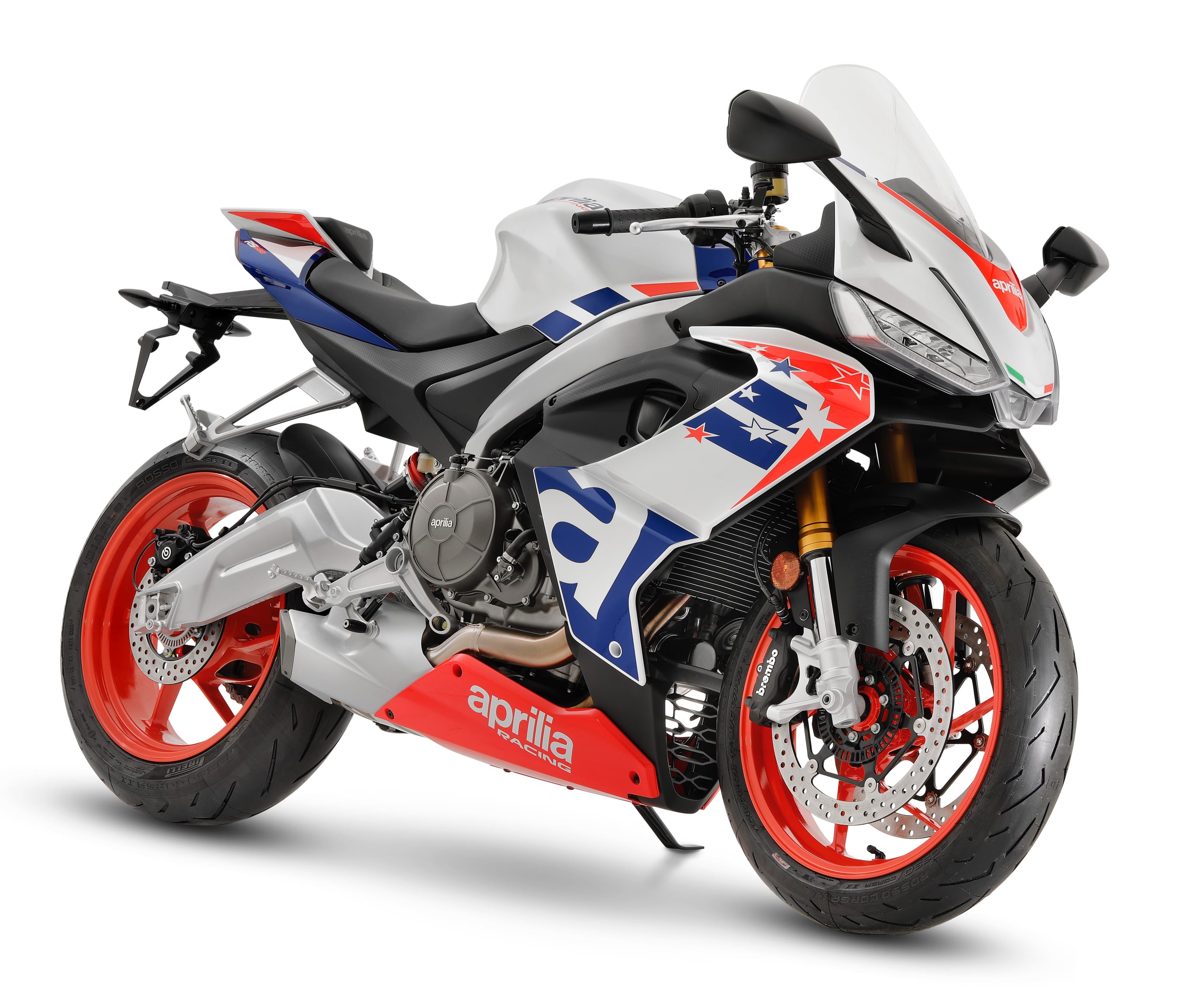 Aprilia RS 660 Limited Edition also boasts a standard equipment package that includes some of the racing content from the competition version that proved to be unparalleled in the Twins Cup, taking 10 wins out of the 13 races held. 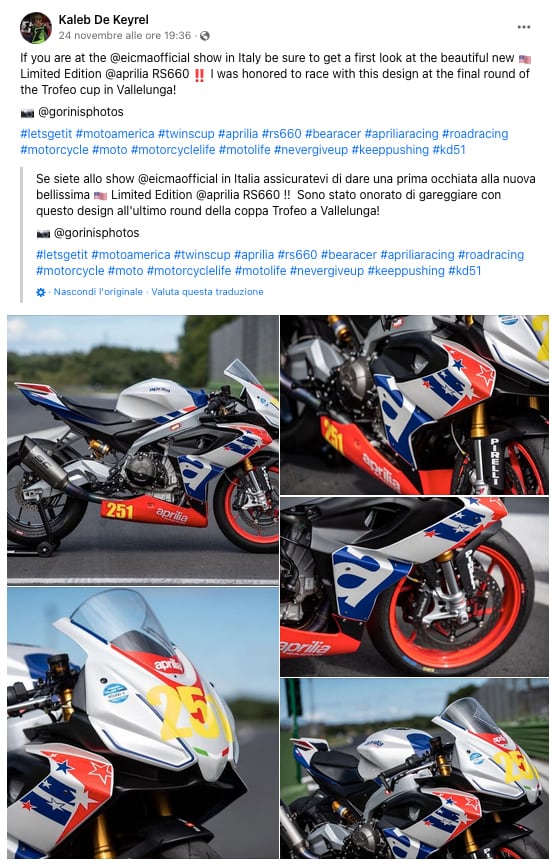 The sporty personality of Aprilia RS 660 Limited Edition is highlighted by the single-seat tail-fairing cover, which eliminates the passenger seat, enhancing the sleek design of the rear. The passenger’s seat comes with the bike, which is still approved for two-up riding. 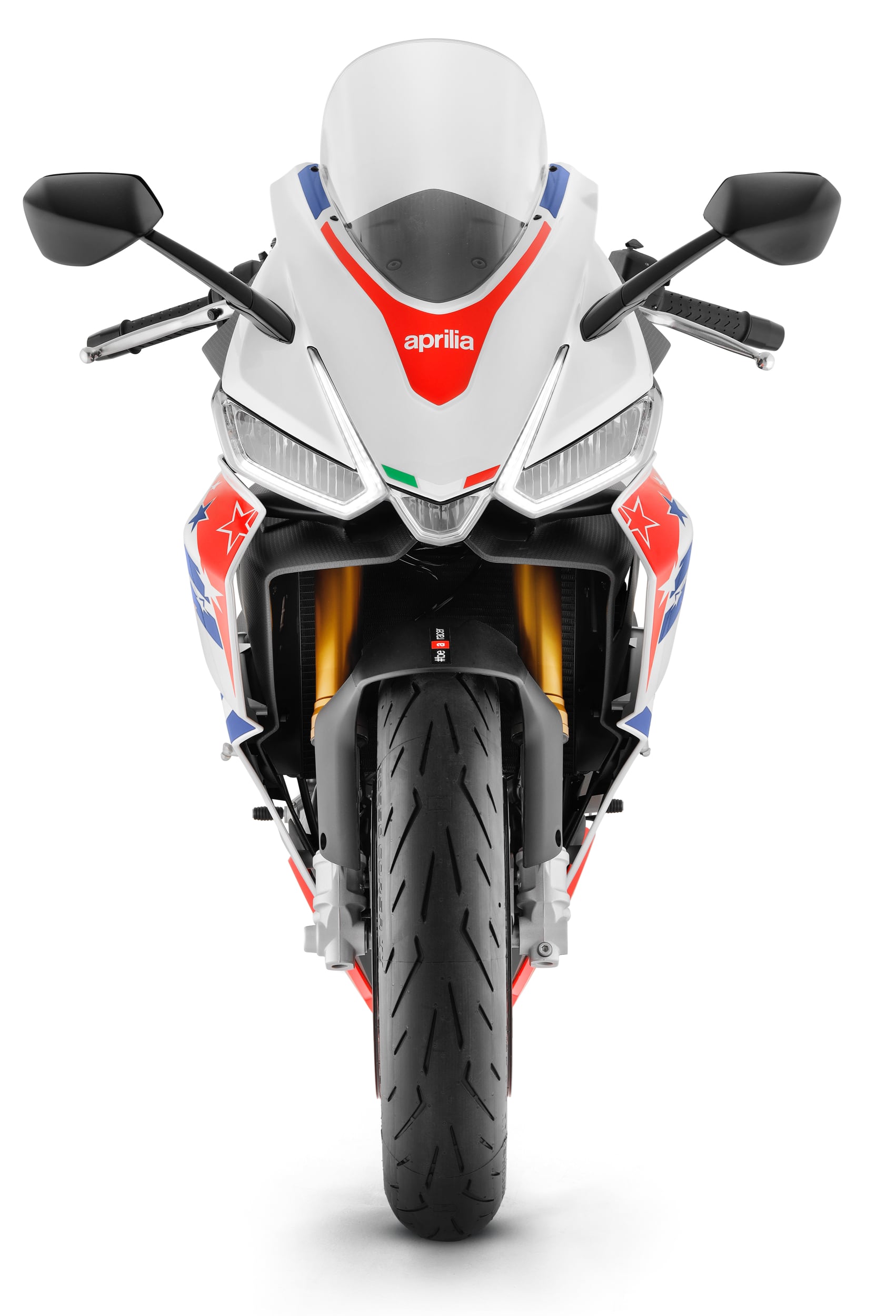 The oversized top fairing ensures greater protection for the rider against the wind, both on the road and on the track, and it also has the software that lets you set up the quick shift gearbox in upside-down configuration. This means that, depending on your needs, you can configure the gearbox entirely on your own, without replacing any parts on the bike, in street or upside-down version - ideal for the occasional track day. 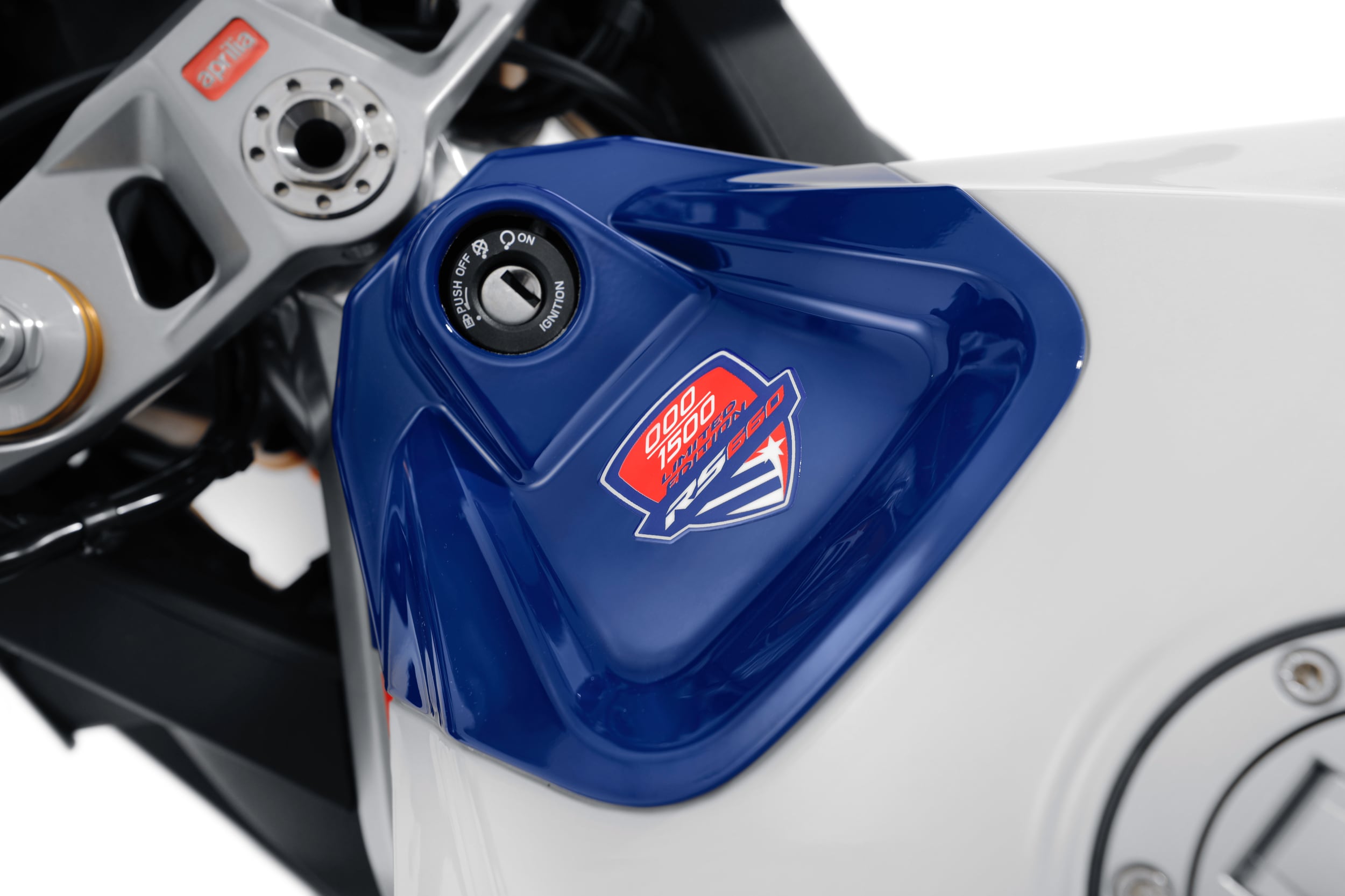 A badge located on the fuel tank bears the progressive number of the bike and indicates the limited edition of 1,500 units.

Aprilia RS 660’s winning streak in MotoAmerica. Just a few months after making its début in the U.S.A. on an American track that is one of the most iconic in the world, the Big Sur circuit in California - ridden by Pikes Peak record holder astride an Aprilia Tuono V4, Rennie Scaysbrook - Aprilia RS 660 was the immediate protagonist of a thrilling sports story. Approved just in time for the beginning of the 2021 Twins Cup, the Italian twin-cylinder took the top three spots straight away in the opening race on the Road Atlanta circuit. It was a blinding start, and in some ways unexpected, followed by a winning streak: 10 total wins out of 13 races held, plus another 16 podiums (9 second places and 7 third places) and 6 pole positions. That first, extraordinary one-two-three was followed by others, on the historic Laguna Seca circuit and in both races held in New Jersey. 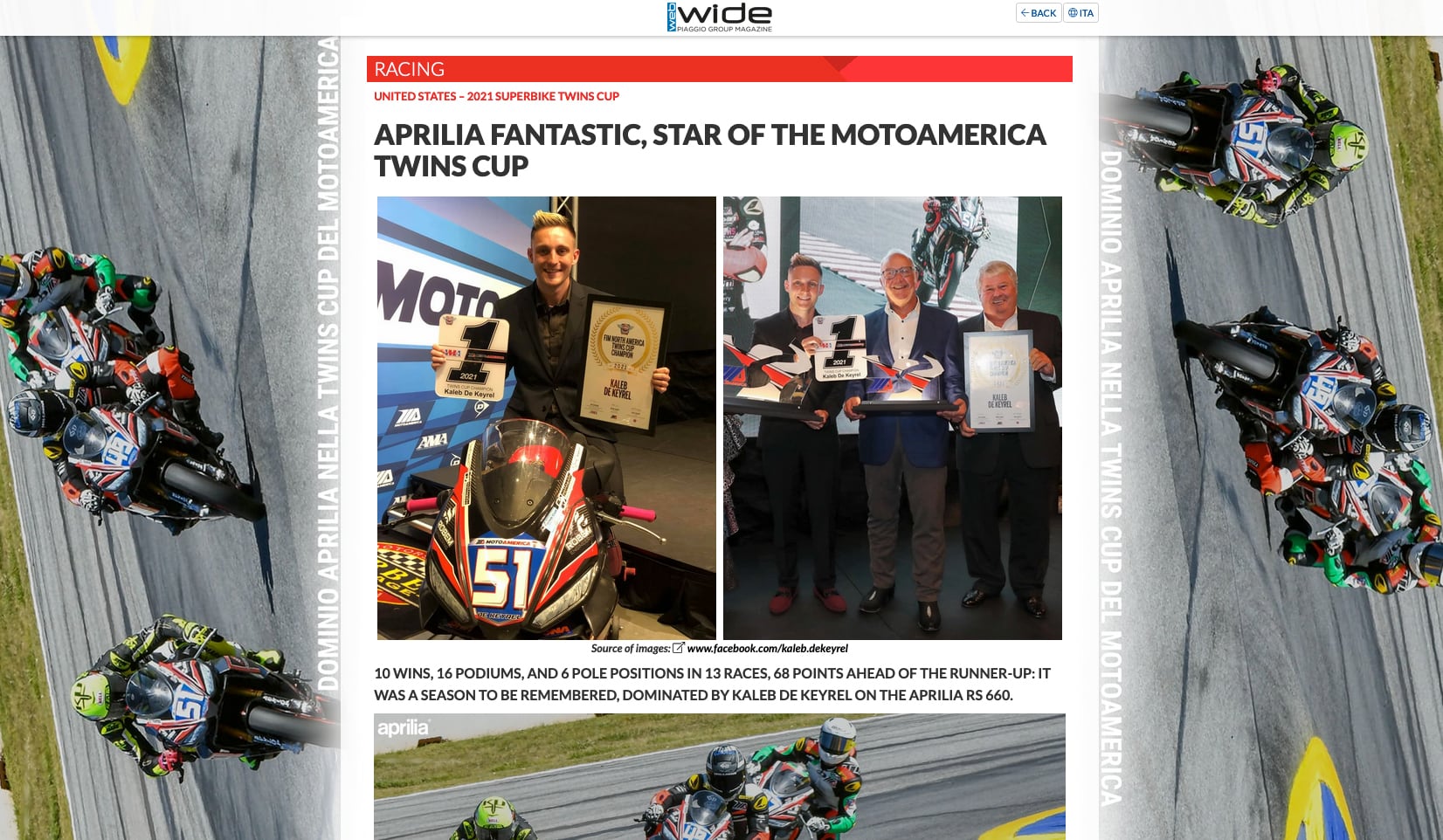 Five of the 10 total wins were achieved by Kaleb De Keyrel, crowned Twins Cup 2021 champion astride his Aprilia RS 660 prepared by the Robem Engineering team. The other victories were credited to Jody Barry, Cory Ventura, Anthony Mazziotto (two wins) and Tommaso Marcon. The Aprilia RS 660 therefore confirmed its status as a versatile bike, able to win on extremely different circuits and with riders who have different riding styles. 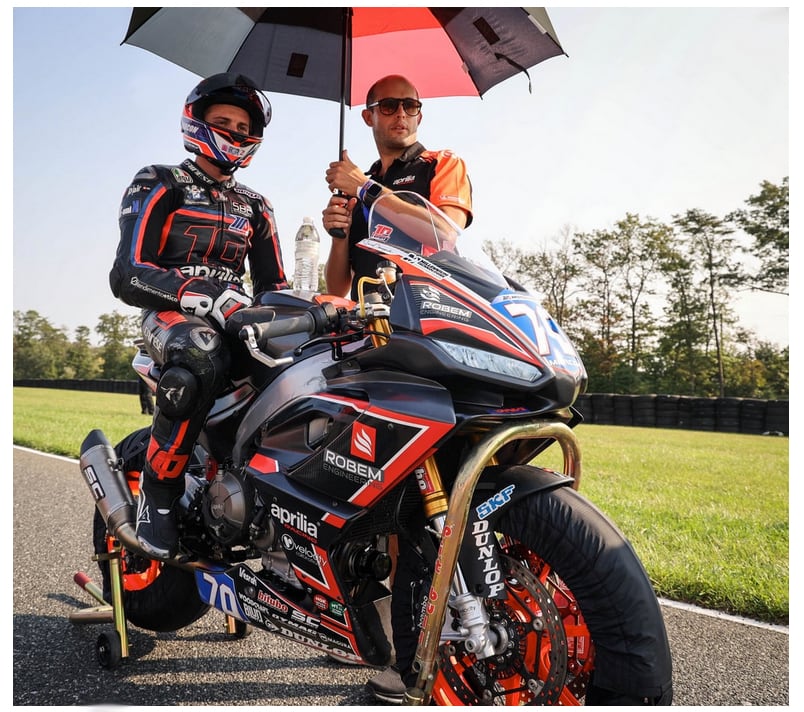 Source of the image: www.facebook.com/kaleb.dekeyrel