APRILIA RSV4 XTRENTA: FROM APRILIA RACING ENGINEERING AND MOTOGP TECHNOLOGY COMES THE MOST EXTREME, HIGH-PERFORMANCE AND EXCLUSIVE APRILIA RSV4 EVER

CHARACTERISED BY REFINED AERODYNAMICS, THE RSV4 XTRENTA IS THE FIRST MOTORBIKE IN THE WORLD EQUIPPED WITH REAR AND UNDER WINGS. UNPRECEDENTED PERFORMANCE FOR MAXIMUM FUN ON TRACK: 230 HP FOR JUST 166 KG, RACING ELECTRONICS AND SUSPENSIONS, DEDICATED SC-PROJECT EXHAUST AND A REAL RACING BIKE SET-UP. BORN TO CELEBRATE 30 YEARS SINCE APRILIA'S FIRST WORLD TITLE, IT IS PRODUCED IN A LIMITED AND NUMBERED SERIES OF 100 UNITS. 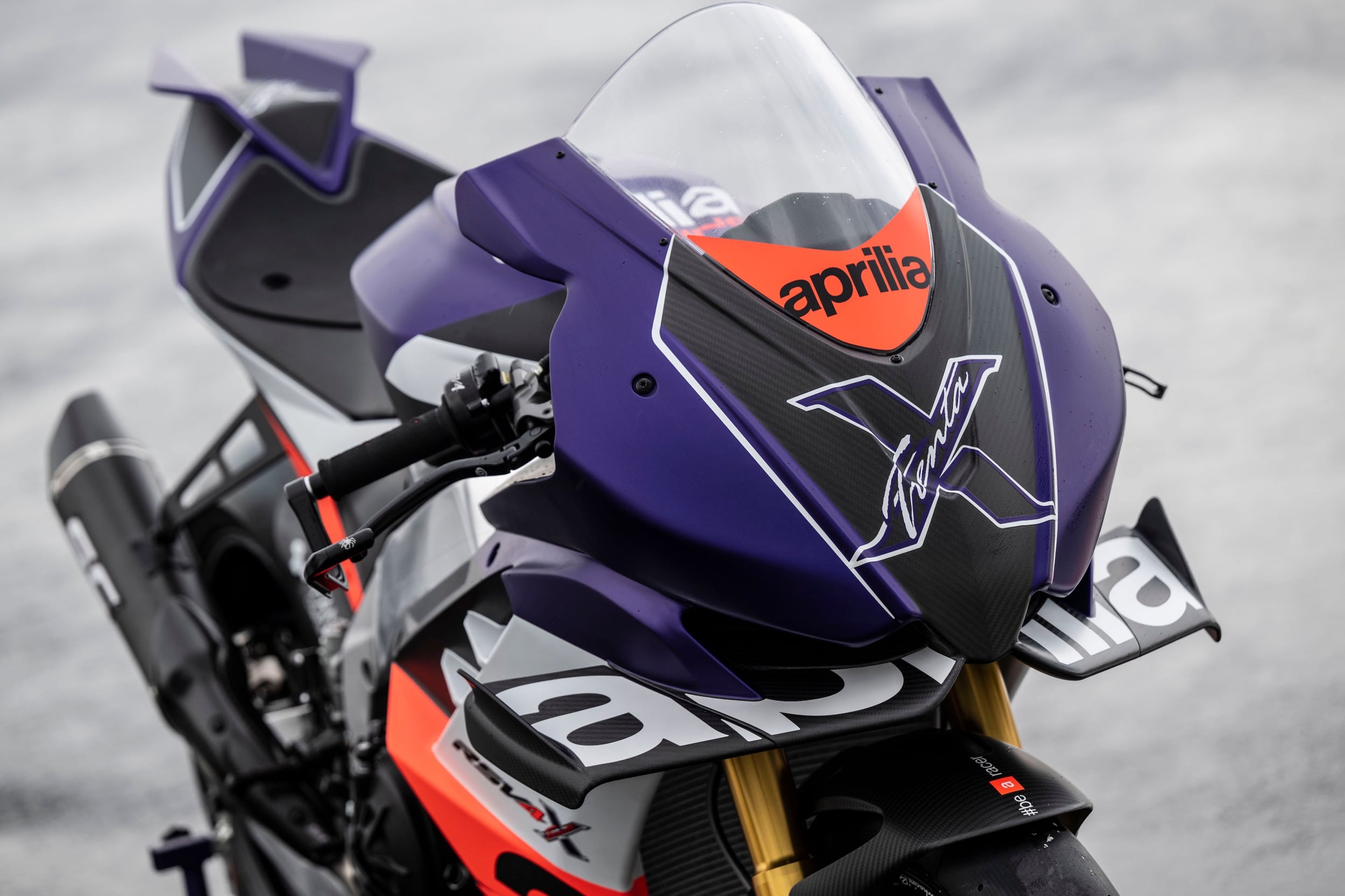 Misano Circuit (Italy), 2 September 2022 - After the great success of the RSV4 X, presented in 2019, and the Tuono X, the most powerful and lightest hypernaked bike ever, Aprilia Racing is back at work on the extraordinary V4 project by presenting the Aprilia RSV4 XTrenta, an absolutely unique creation that celebrates the 30th anniversary of Aprilia's first World Championship title.
The RSV4 XTrenta is made by the Noale Racing Department by exploiting technologies never before so close to those used in MotoGP in terms of materials, components, electronics, attention to detail and above all aerodynamics, a sector which has become of fundamental importance in recent years and in which Aprilia Racing has shown itself to be at the forefront with the RS-GP committed to the 2022 season.
Never before has a motorbike on sale to the public been able to boast such a refined aerodynamic study. All the parts of the carbon fairing are made by PAN Compositi using the same processes used in MotoGP and incorporates both the newly designed front wings, capable of guaranteeing more load and at the same time less drag, and the brand-new rear wings, on the tail. But that's not all: the RSV4 XTrenta is the first bike in the world to mount the 'under wing'on the swingarm, the lower wing that equips the RS-GP bikes from 2019 and is commonly called the 'spoon' in MotoGP. The results of the new configuration speak for themselves: aerodynamic load increases by 25%, while reducing drag by 4%. 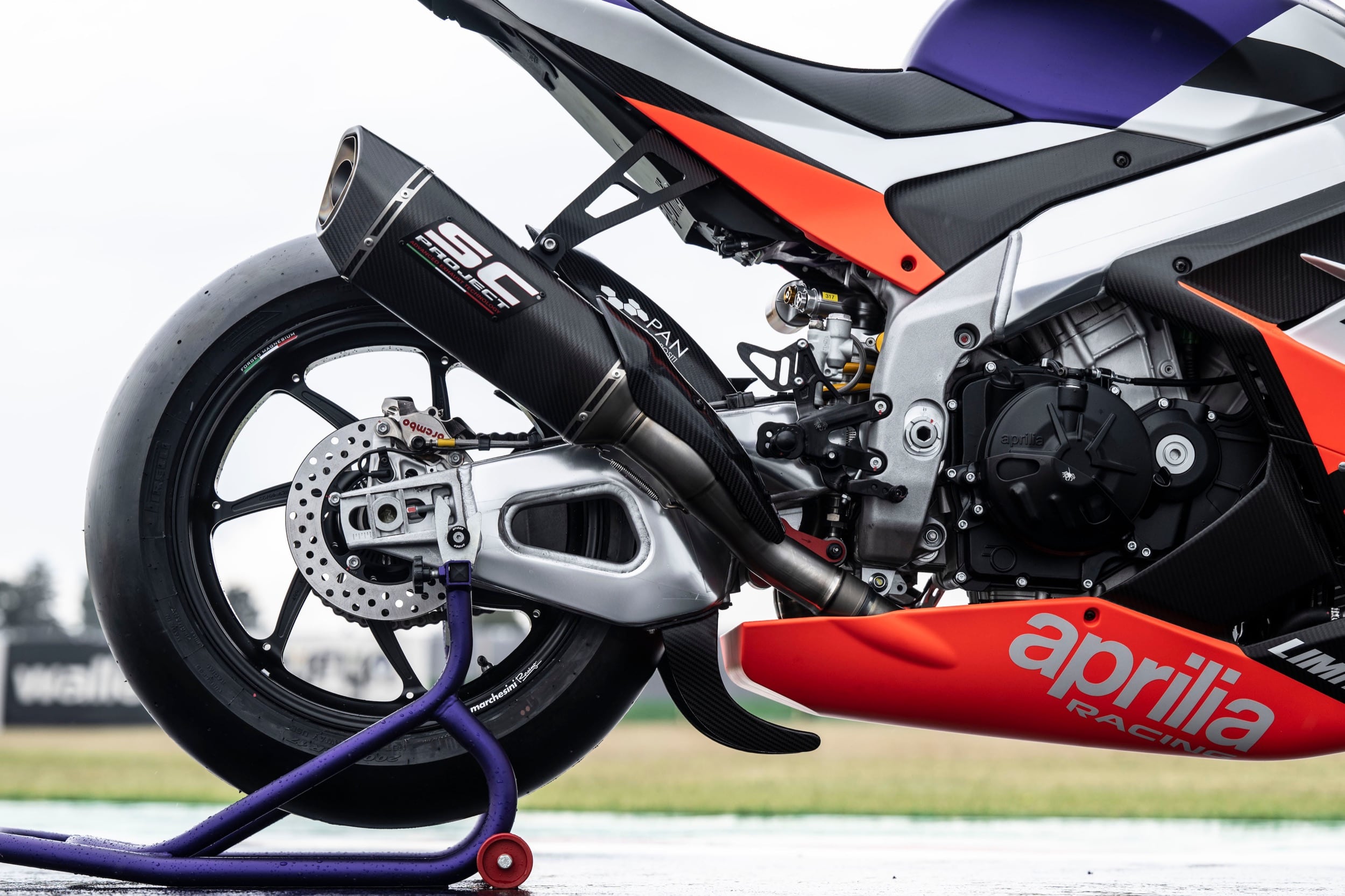 Starting from the already excellent base represented by the 2022 Aprilia RSV4 Factory 2022, Aprilia Racing's interventions have covered every area, starting with the engine, which reaches the extraordinary peak of 230 horsepower. This is thanks to an increase in the compression ratio, which works in symbiosis with a specific titanium and carbon exhaust system created by partner SC-Project, which looks after and develops all Aprilia Racing exhausts. A Sprint Filter air filter using MotoGP and Formula 1 specification materials completes the equipment. A full-titanium silencer whose design is derived directly from the unit used in MotoGP will be available as an option. In light of the high performance and heavy-duty track use, the water and oil radiators are Superbike-derived Taleo Tecnoracing. 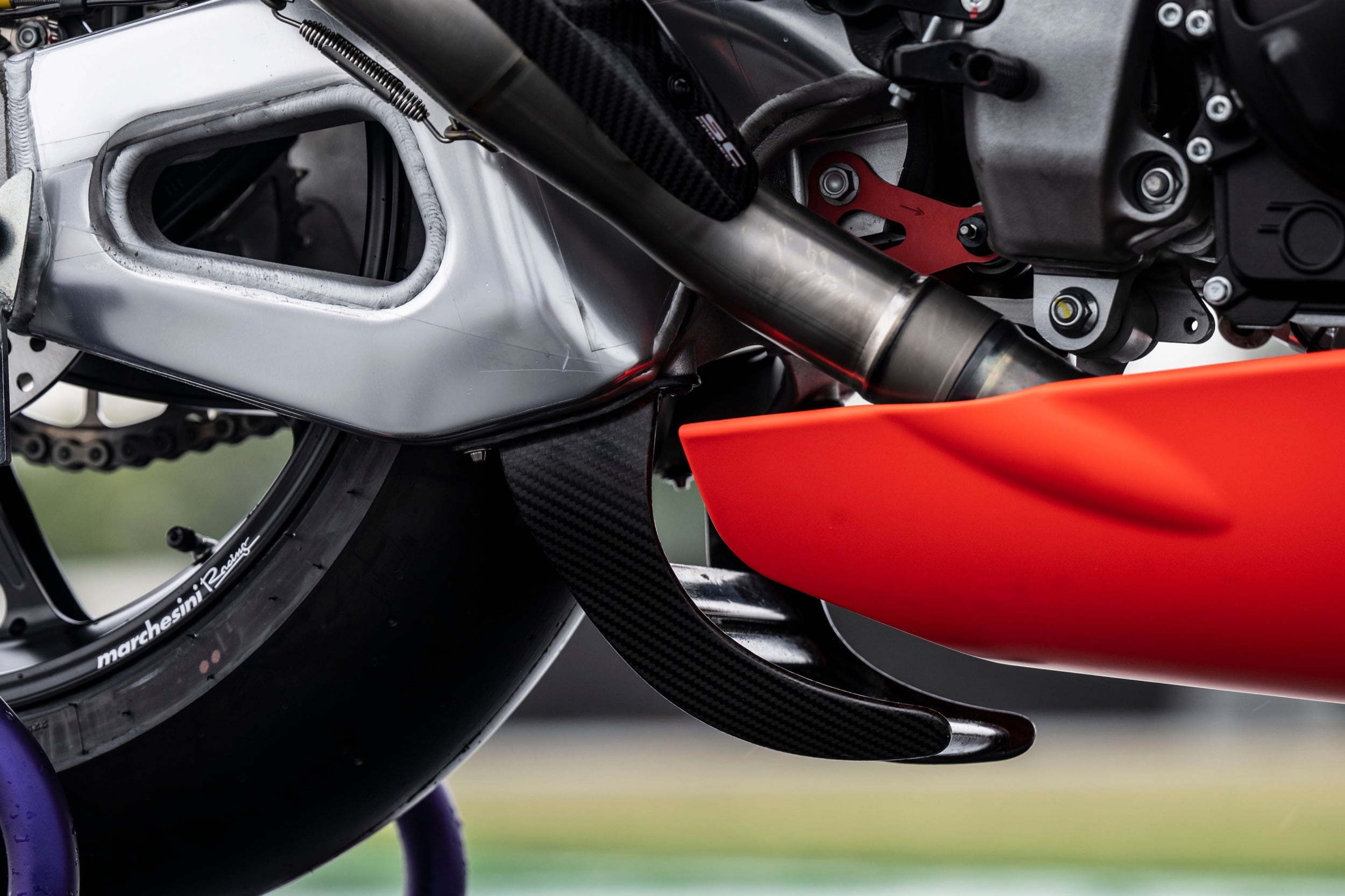 The performance of the Italian V4 is managed by a specially calibrated Magneti Marelli control unit, while the transmission features a PBR-branded titanium sprocket (another XTrenta exclusive). The RSV4 XTrenta's electronic suite is controlled by a JetPrime racing panel, while accessories include footpegs, handlebar levers and a CNC fuel cap by Spider.
On the chassis side, the RSV4's rigorous chassis is refined with Ohlins suspension modified by Andreani in collaboration with Aprilia MotoGP engineers. The billet steering plate is exclusive to Aprilia Racing. The braking system is the top available on the market, Brembo branded, consisting at the front of GP4-MS billet monobloc calipers and 330mm T-drive discs. The forged magnesium Marchesini M7R GENESI rims fit Pirelli Diablo SBK slick tyres in sizes 120/70 and 200/65, with SC-1 compound front and SC-X compound rear. The wheel weight reduction is around 2 kg compared to the standard.

The livery of the new Aprilia RSV4 XTrenta, used by Lorenzo Savadori in the Austrian GP, represents a contemporary interpretation of the one Aprilia sported in 1992 in the 125cc MotoGP class, on the occasion of the first of the 54 world titles that make its palmarès one of the richest in motorcycling sport. 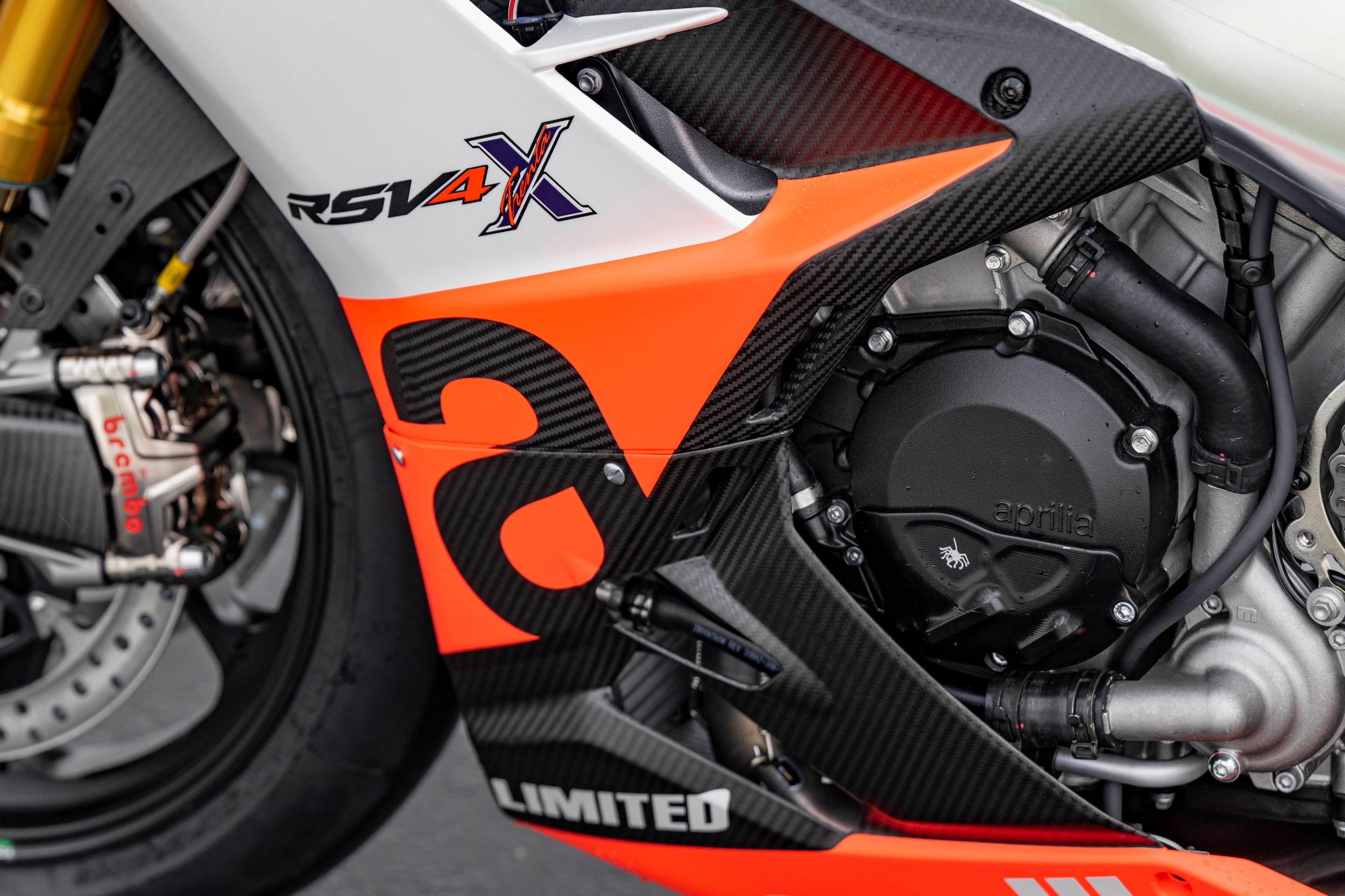 Availability and price. Each of the 100 units of the Aprilia RSV4 XTrenta, offered at a price of € 50,000 excluding VAT, will be bookable exclusively online from 6 September, by accessing the factoryworks.aprilia.com web area. Lucky buyers will also have the chance to collect their model from Aprilia Racing, with an exclusive visit to the Noale racing department at the same time, and will receive not only the limited and numbered version of the RSV4 but also the dedicated motorbike cover and mat.
The RSV4 XTrenta is part of the Factory Works programme launched by Aprilia Racing: unique in the world, it makes the same technology developed in competition available to those who intend to compete at the highest levels in the production derivatives championships or who wish to have an RSV4 or Tuono V4 with performance optimized for use on the track. 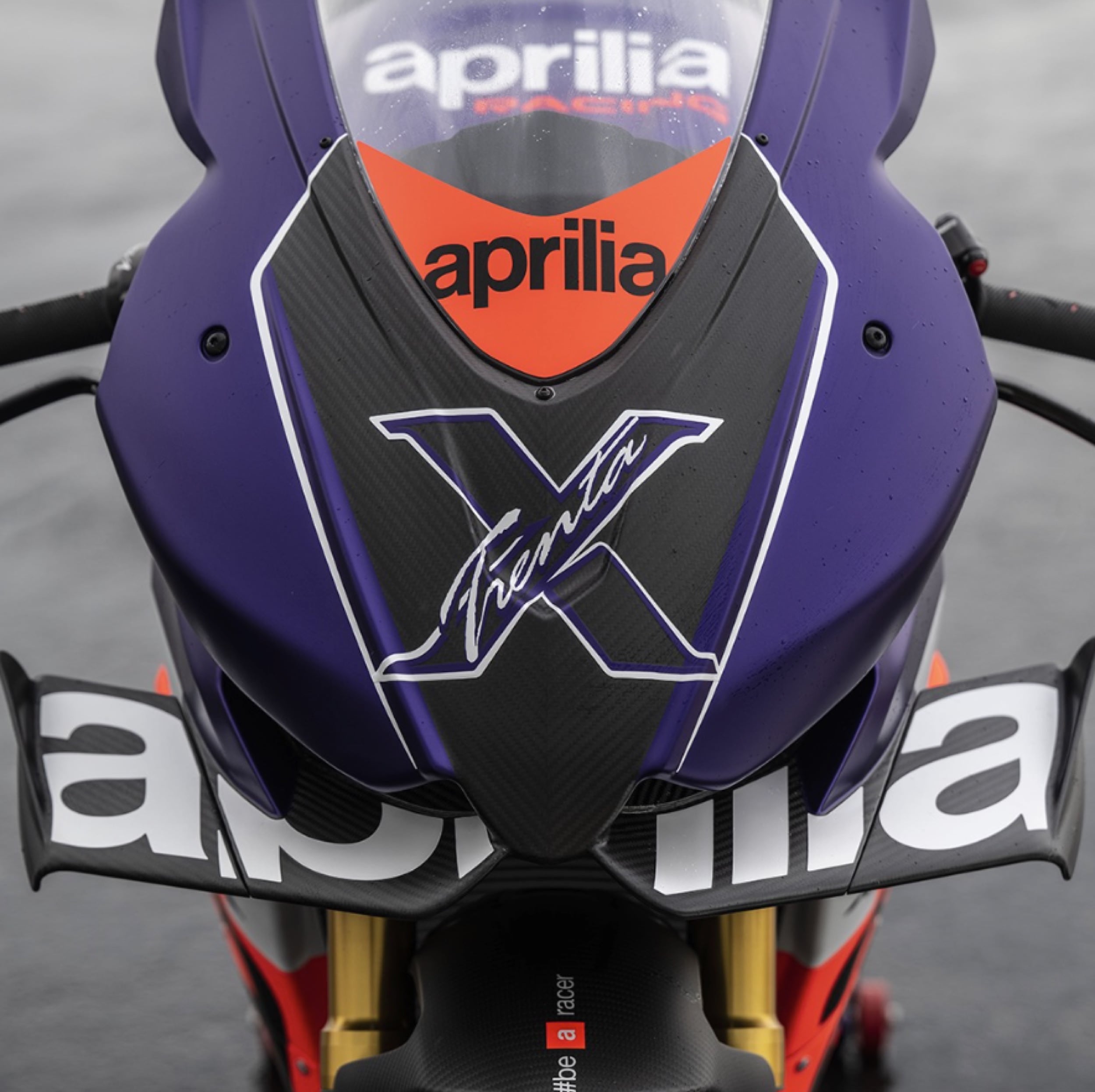