A LIMITED AND NUMBERED EDITION CELEBRATES A GREAT ITALIAN HERITAGE, THE 75 YEARS OF COLLABORATION BETWEEN THE MANDELLO-BASED MANUFACTURER AND THE CUIRASSIERS' REGIMENT. THE SPECIAL “CUIRASSIERS REPLICA” LIVERY, THE DEDICATED EQUIPMENT PACKAGE, AND A QUALITY COLLECTOR'S CASE CHARACTERISE A TRULY EXCLUSIVE MOTORCYCLE.

Milan (Eicma), 23 November 2021 - It was the post WW2 era when the Cuirassiers' Regiment, the special Carabinieri unit responsible for the honour guard and security of the President of the Italian Republic, chose Moto Guzzi as its first motorcycles. From that moment on, the guards of the Head of State have always ridden bikes made in Mandello del Lario, creating a historic combination of style, loyalty, and prestige which has become one of the best known and most beloved symbols of "Italianism" in the world.

The Eagle brand manufacturer celebrates this important collaboration, which has lasted uninterrupted for 75 years, presenting the Moto Guzzi V85 TT Guardia d’Onore at EICMA 2021. This is a special, numbered limited edition of its highly popular classic travel enduro which, precisely in Moto Guzzi's centennial year, joined the Cuirassiers' Regiment's motorcycle fleet. In fact, with a presentation ceremony to President of the Republic Sergio Mattarella on 20 May 2021, two Guzzi V85 TT units joined the California 1400 Touring bikes already used by the Cuirassiers.

Just like the V85 TT bikes delivered to the Head of State at the Quirinal Palace, the V85 TT Guardia d’Onore features the typical black livery with white graphics that characterise the Cuirassiers' Moto Guzzi machines. The white decorations run along the front mudguard, continuing onto the fuel tank and the side panels and they are also picked up on the oversized Touring windscreen. The latter is part of the standard equipment package, along with the centre stand, the engine guard bars and the supplementary LED lights. The pair of side panniers dedicated to this model are available on request.

The Moto Guzzi V85 TT Guardia d’Onore will be produced in a limited edition of 1946 units, a number reminiscent of the first 75 years of partnership between the Mandello Eagle and the Cuirassiers' Regiment, as well as a tribute to the year the Italian Republic was established. To further highlight the exclusive nature of this particular version, the progressive number of the unit is engraved on the handlebar riser, from 1 to 1946. 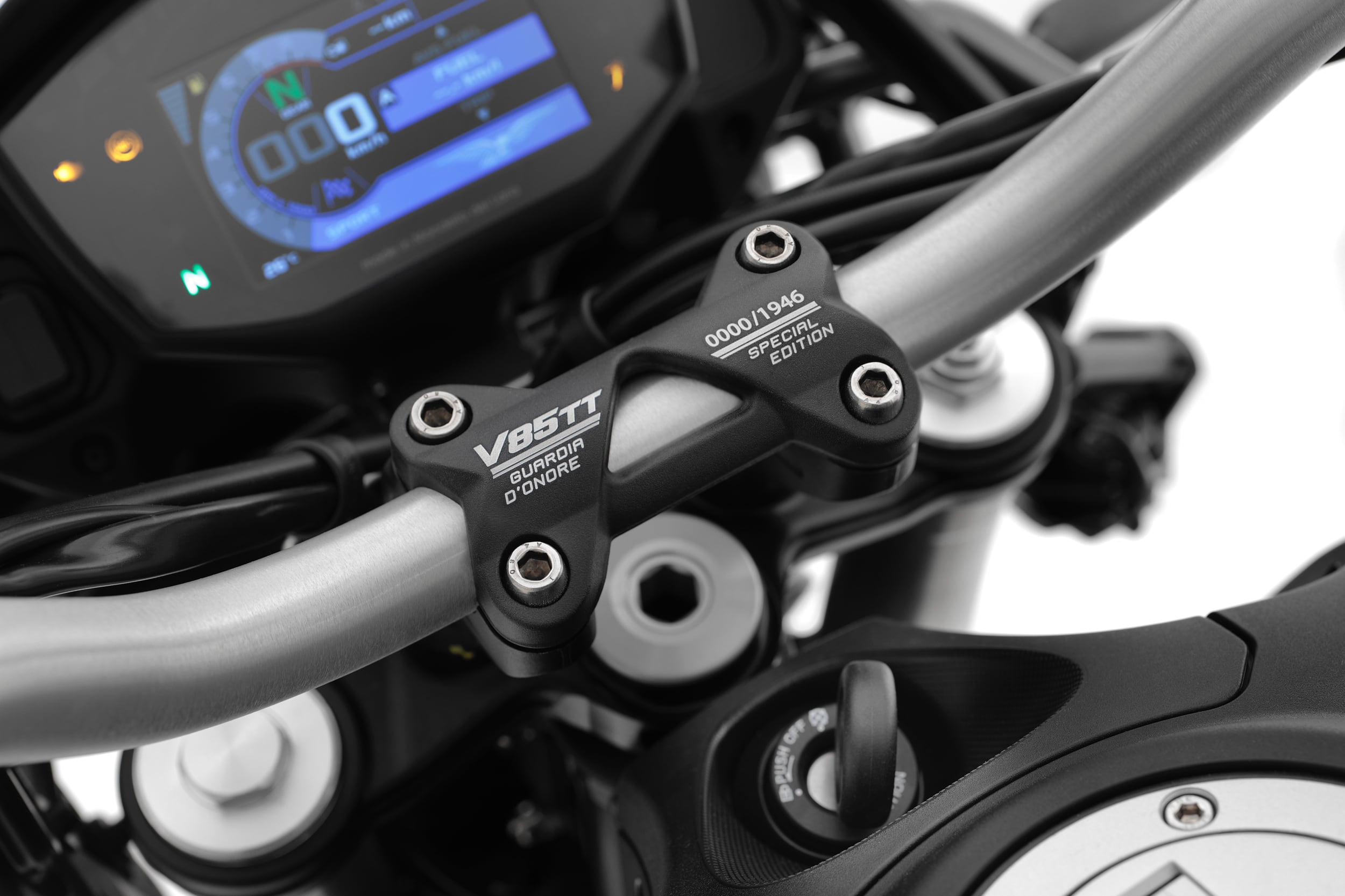 Everyone who purchases this special version of the V85 TT will also receive a valuable celebratory case which includes a brochure with the history of Moto Guzzi bikes used by the Cuirassiers and the stamp collector's folder containing the postmarked stamp issued on the occasion of the Moto Guzzi Centennial.

The Cuirassiers and Moto Guzzi: 75 years of history. The long history that binds the Cuirassiers' Regiment to the Eagle from Mandello has its roots in the second post-war period when modern cars began to be favoured over the outdated royal carriages for institutional travel involving the President of the Italian Republic. Consequently, the escort unit made up of select - and extremely tall - elite Carabinieri needed a means of transportation more suitable than horses to follow the motorised vehicles.
Confirming years of collaboration with the Italian armed forces, the choice fell almost naturally to Moto Guzzi, a true source of national pride, partly because of their countless victories achieved in motorcycle racing since the ’20s. The need to quickly motorise a unit that had been strictly equestrian until then led the Cuirassiers to adopt 4 different Moto Guzzi models in just over 5 years. And so, the Alce, military bike par excellence, the Superalce, the Astore and its direct evolution, the Falcone Sport joined the regiment's fleet. However, it was only from the Astore that the bikes were specially outfitted to adapt to the needs of the Cuirassiers, including those connected to their specific height (in fact, the minimum height requirement to join the regiment was 190 cm). 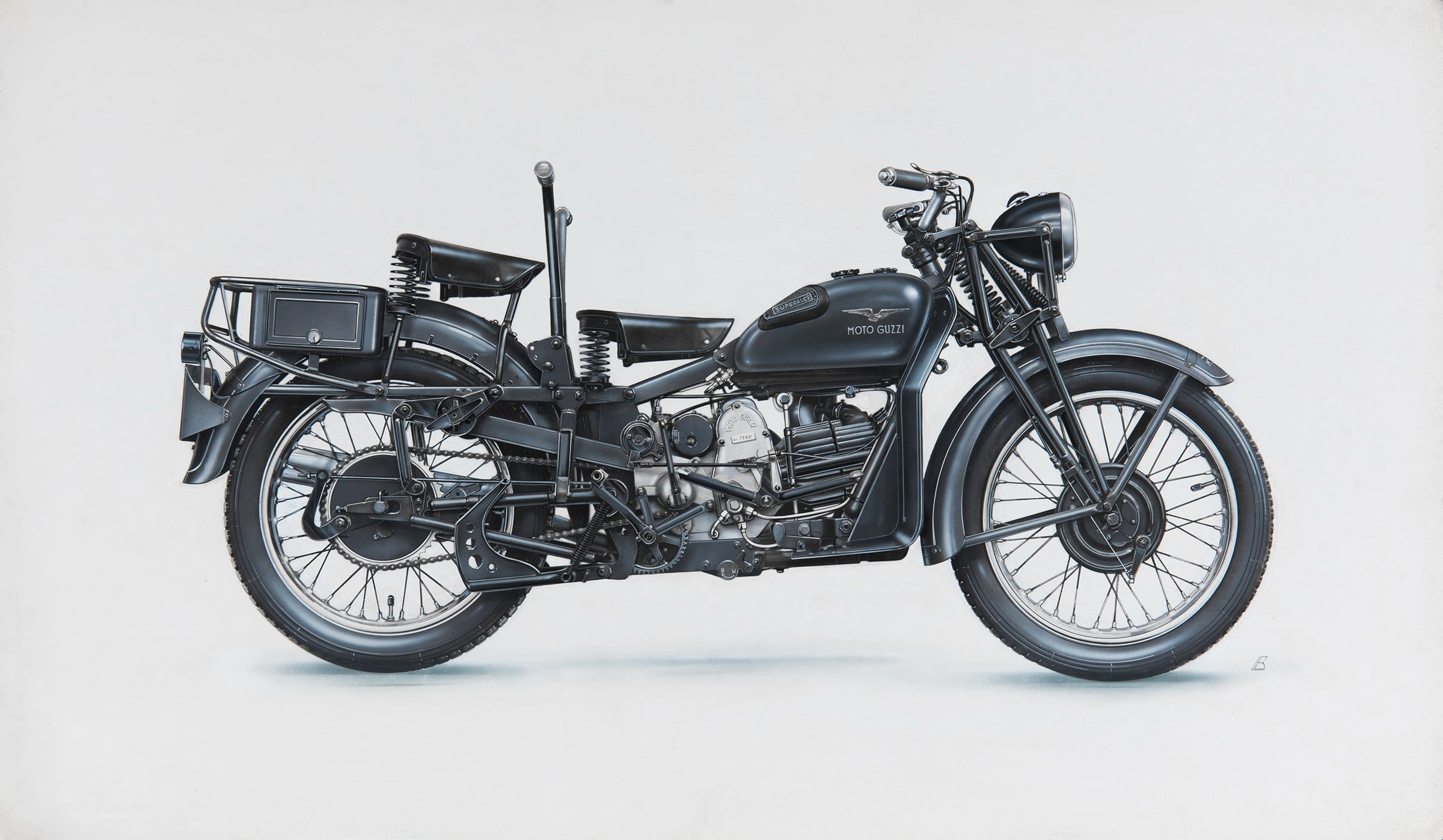 As the nineteen-sixties approached, it was still the Falcone Sport (with electric starter from 1959) that escorted the President of the Republic and the various foreign Heads of State visiting Italy. In line with the technological evolution in the motorcycle field, the first true change in the Cuirassiers' motorcycle fleet came in 1968. With the V7 Special units, the single-cylinder was definitively surpassed to embrace the new Moto Guzzi era and the revolutionary transversal V-twin, destined to become the manufacturer's calling card. 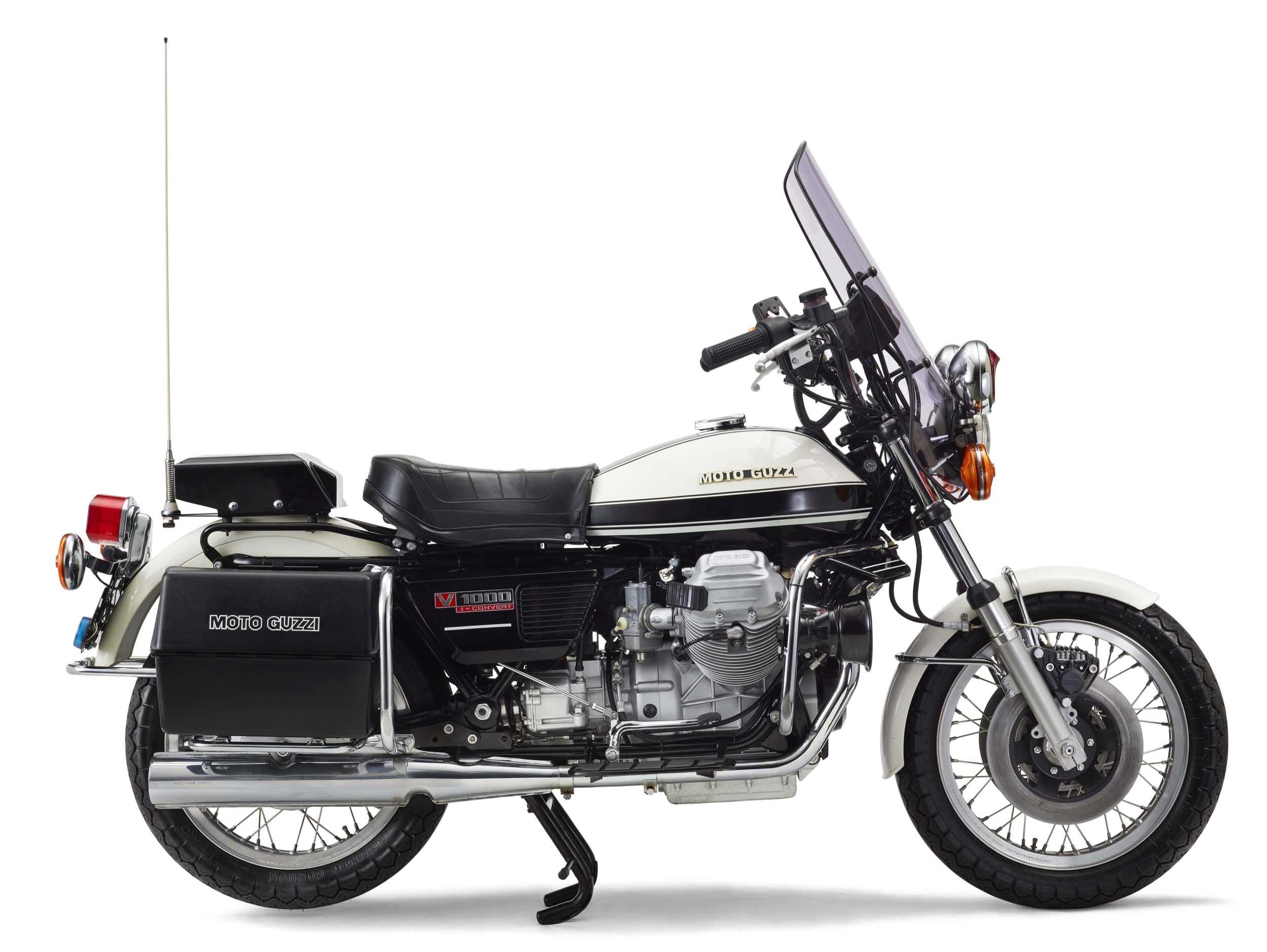 In 1975, one of the most innovative Moto Guzzi models arrived on the market - the V1000 I-Convert. With its increased engine capacity that reached 1000 cc and its unprecedented integrated braking system, the I-Convert went to work straight away escorting the President of the Republic, paving the way for the next 40 years of maxicruisers from Mandello destined for this role.
The mid ’80s marked the start of the long relationship between the Cuirassiers and the various Moto Guzzi California models, increasingly more muscular and with increasing engine capacity. Displacement went from the 948 cc of the California II used in 1985 all the way to the 1380 cc of the segment monarch, the California 1400 Touring, which cut a fine figure in the Cuirassiers' parades and in presidential transfers from 2007.

The Moto Guzzi California 1400 Touring bikes in New York City during a Columbs Day parade (2016), led by representatives of the Corazzieri Regiment of the Italian Republic.

In May of this important year, which marks Moto Guzzi's one-hundredth birthday, the Eagle brand presented the current President of the Republic, Sergio Mattarella, with V85 TT units (photos below) which joined his personal escort fleet. The brand-new bikes feature a livery created specifically for the occasion, chromatically reminiscent of the California 1400 units already used. 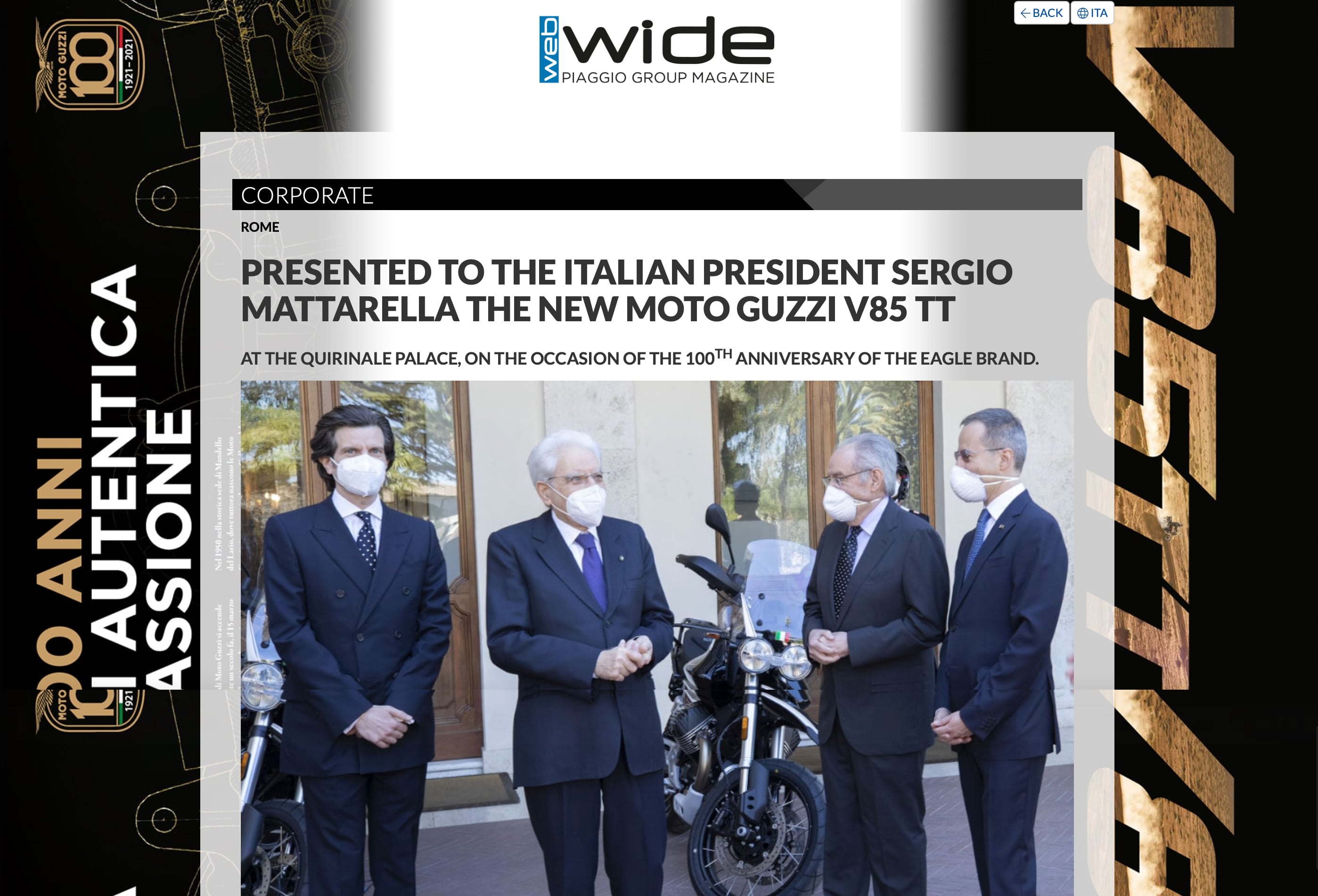