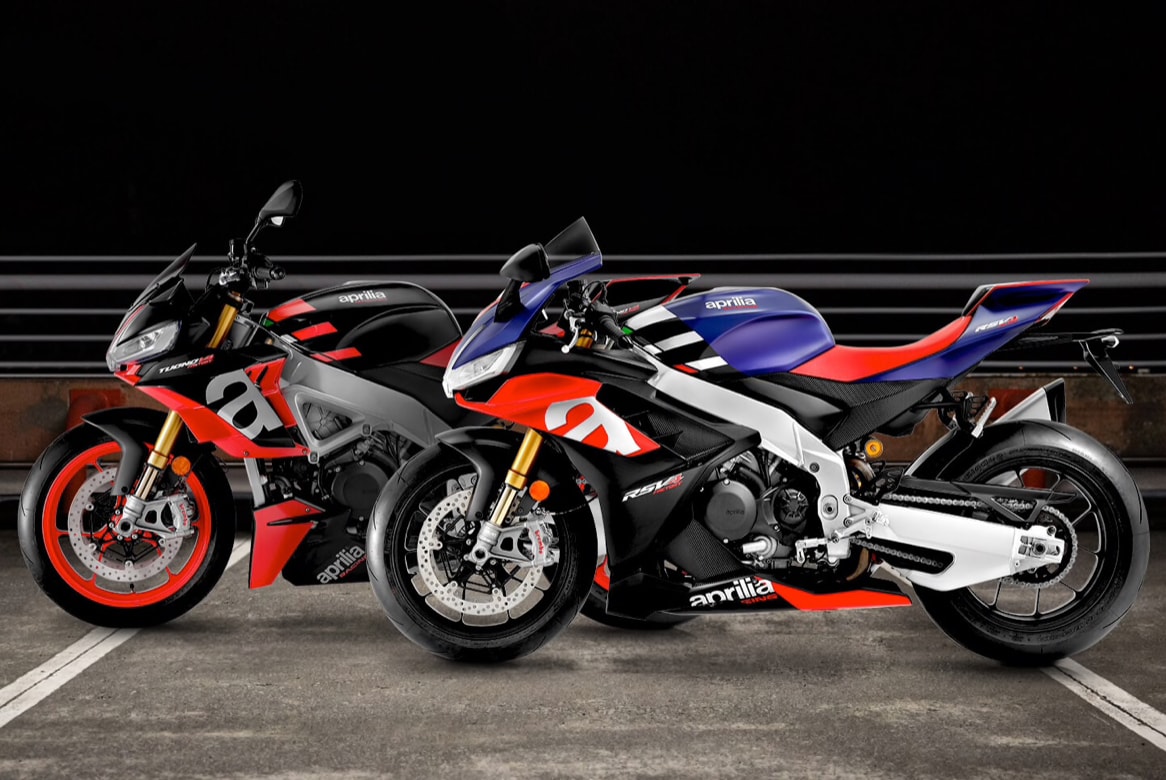 THE RSV4 AND TUONO V4: THE UNDISPUTED SUPERBIKE AND HYPERNAKED PAR EXCELLENCE. TWO EXTRAORDINARY, UNIQUE DESIGNS THAT ARE SET TO TAKE THEIR CATEGORIES BY STORM. 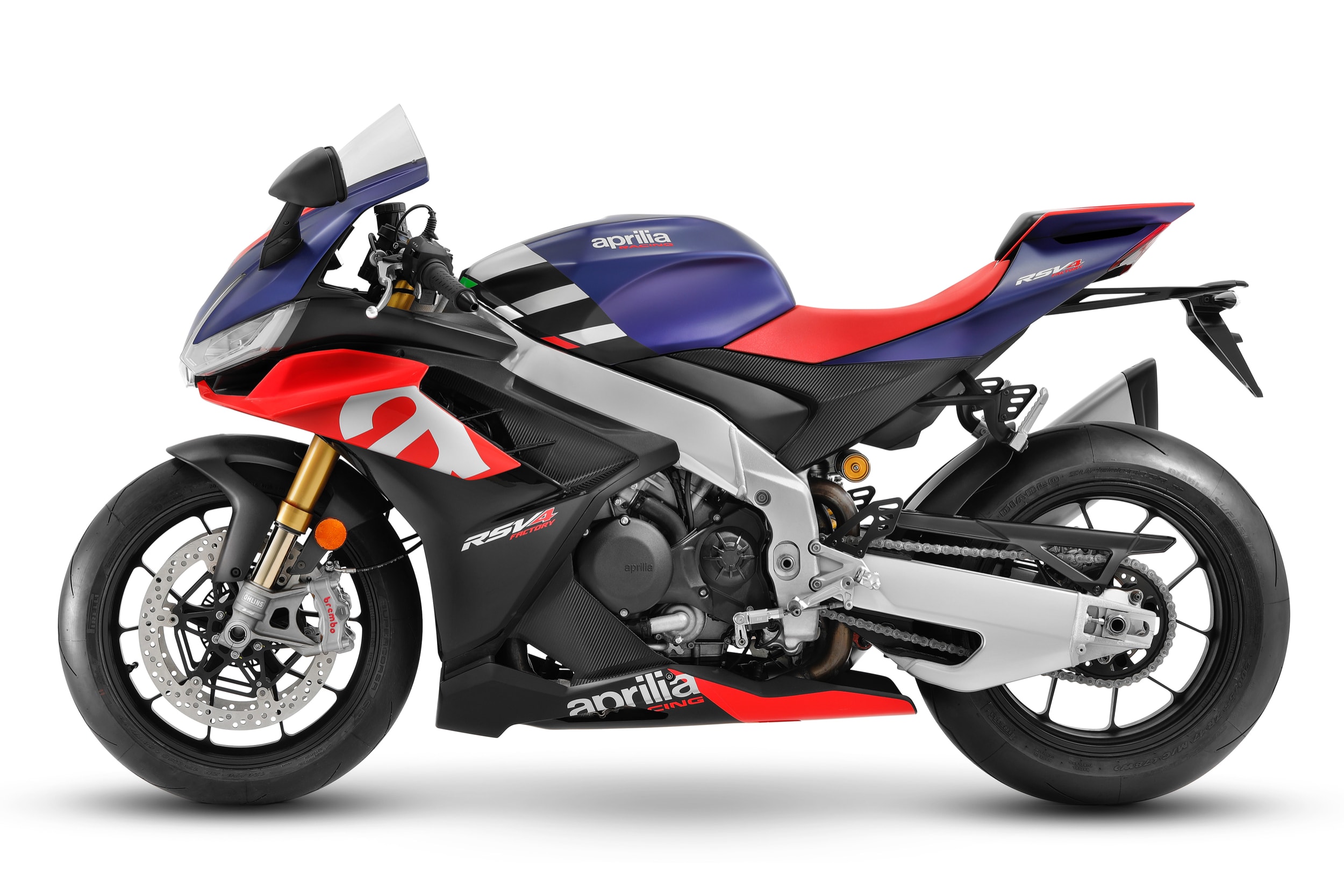 INTRODUCING ON APRILIA.COM WEB PAGES THE FIRST IMAGES OF THE NEW RSV4, EVOLUTION OF AN EXTRAORDINARY AND VICTORIOUS PROJECT, UNIQUE IN THE WORLD. NEW DESIGN WITH BUILT-IN WINGLETS, ENGINE AND ELECTRONICS EVOLUTION, NEW ERGONOMICS FOR EVEN HIGHER PERFORMANCE LEVELS. NEW APRILIA RSV4, THE UNDISPUTED POINT OF REFERENCE FOR SUPERBIKES. 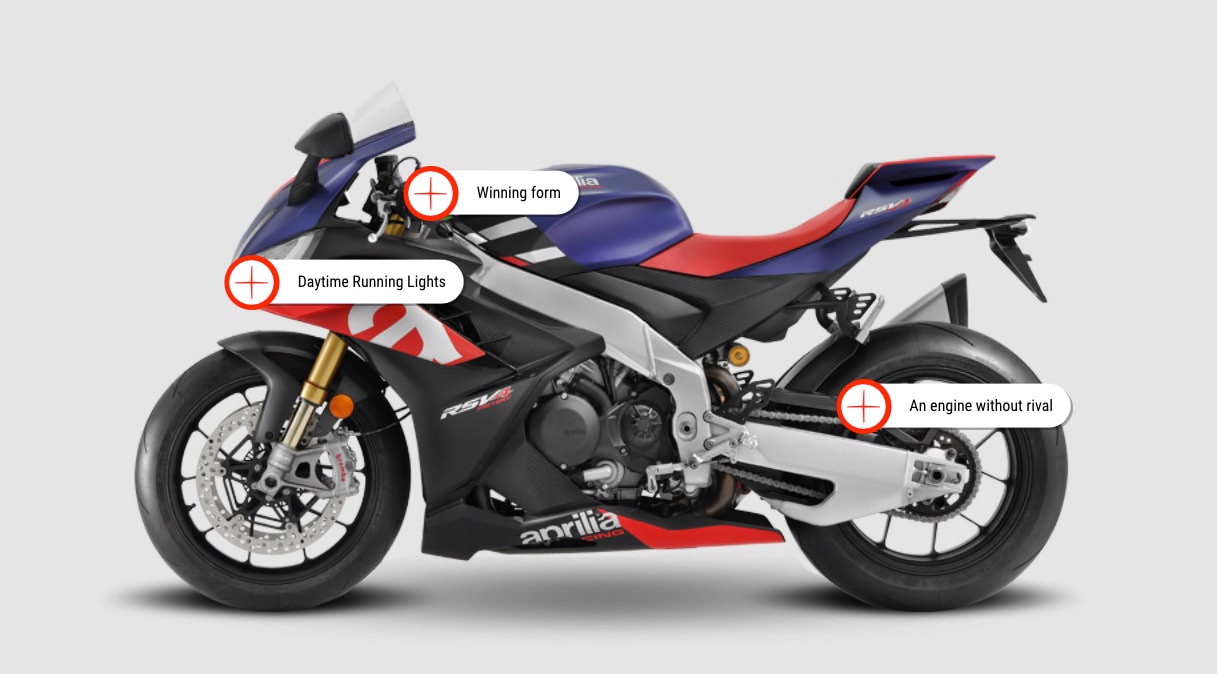 15 January 2021 - The history of the Aprilia RSV4 is one of the most fascinating motorcycle stories in the world. Built with the goal of winning on the track and in every comparative test, it has dominated for a decade, earning the approval of critics and titles in every category in which it has raced. In its most extreme evolution, it even raced in the MotoGP World Championship.
This is the demonstration of an incredibly far-sighted design in a sector where motorcycles are the result of the best technology available to the manufacturer. The Aprilia RSV4 has been constantly updated and refined over time, consistently remaining the reference point for sportiness and performance, the best example of what can be achieved by exploiting the valuable experience of a victorious Racing Department like Aprilia's, which in its brief history has taken 54 championship titles, including seven achieved in the world SBK championship specifically with the RSV4.
On display for its global première online at APRILIA.COM, now a new RSV4 has been born, profoundly revamped, beginning with the aesthetics. 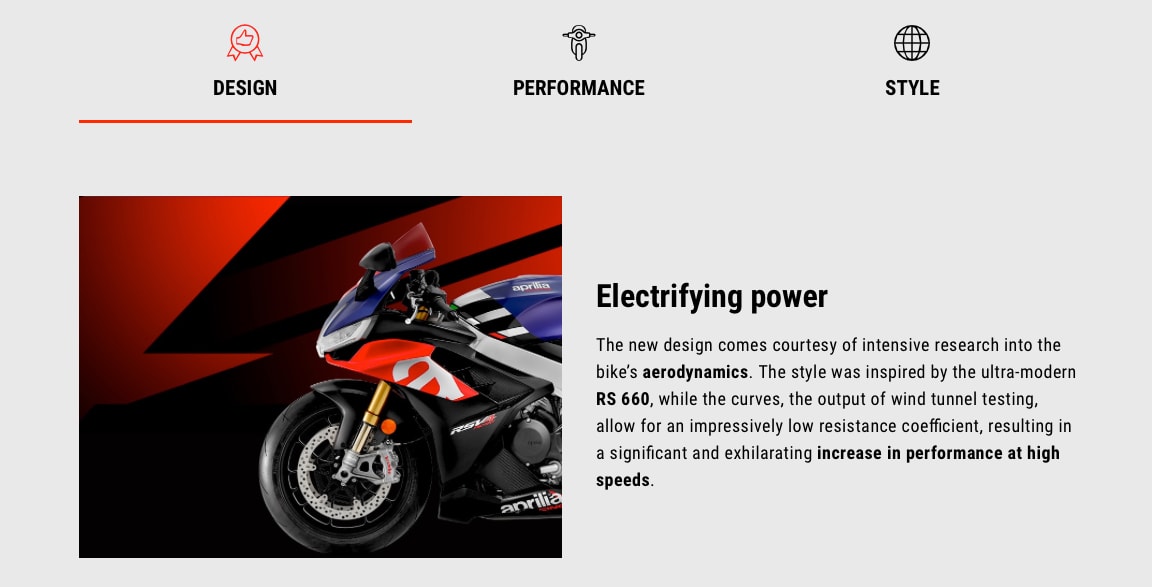 The new design is the result of a great deal of work done in terms of applied aerodynamics, confirming Aprilia’s commitment to studying increasingly complex and innovative solutions. The style, inspired by the ultra-modern RS 660, and the shapes modelled in the wind tunnel allow an extremely low aerodynamic resistance coefficient, with a significant benefit in terms of performance at high speeds, also increasing the air pressure in the airbox, which all increases downforce.
The winglets are no longer an additional element on the panels, but are built into the double-wall fairings, a solution that optimises stability at high speeds and simultaneously improves engine cooling, diverting the hot air flows from the rider, in addition to representing a highly aesthetic feature.
The triple LED front headlight unit, featuring perimeter DRL lights represents the lighting signature of Aprilia sport bikes and includes the “bending lights” function: the pair of supplementary lights that illuminate the inside of the turn, increasing visibility when cornering. 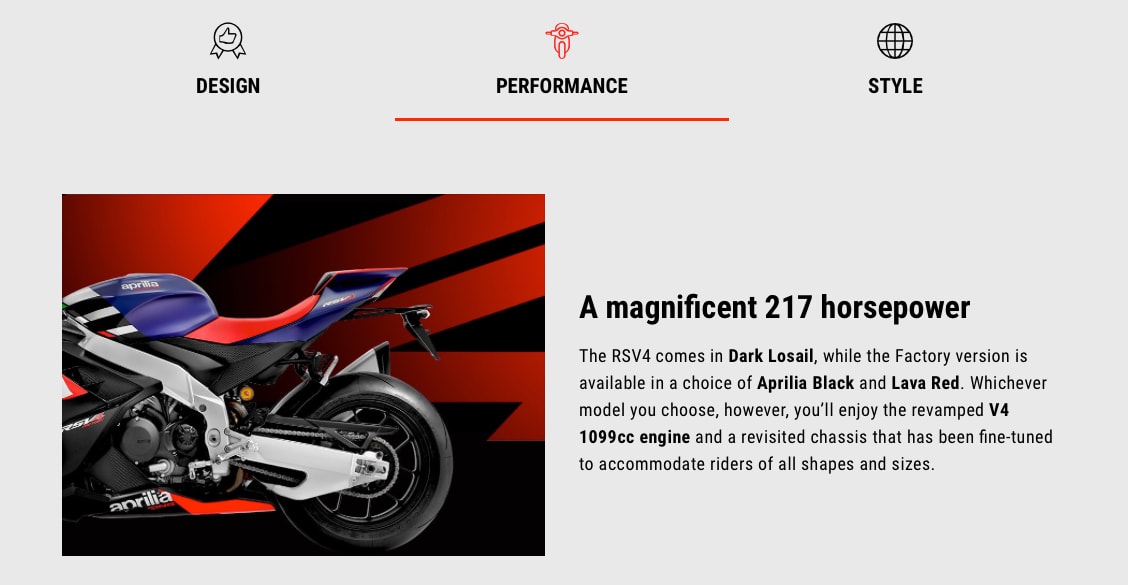 The ergonomics are entirely new and improved thanks to the new fuel tank and the new saddle that allow the rider to fit perfectly with the fairings, more on board space and a more natural and relaxed riding position. The electrical controls are more functional and intuitive, and the new TFT instrumentation is larger and more complete. Thanks to the new Marelli 11MP ECU and the new, six-axis inertial platform, both more powerful, electronic management has improved with control of the full Ride-by-Wire throttle and the APRC operating logic has also been refined. The exclusive suiteof Aprilia electronic controls has also been completed with the introduction of the multi-level engine brake control. There are now six Riding Modes, three for the track (including two customisable) and three for the road (including one customisable): the rider just needs to choose the Riding Mode that best interprets his or her riding needs to automatically obtain the best settings in terms of Traction Control, Wheelie Control, engine brake, ABS and the other managed parameters. 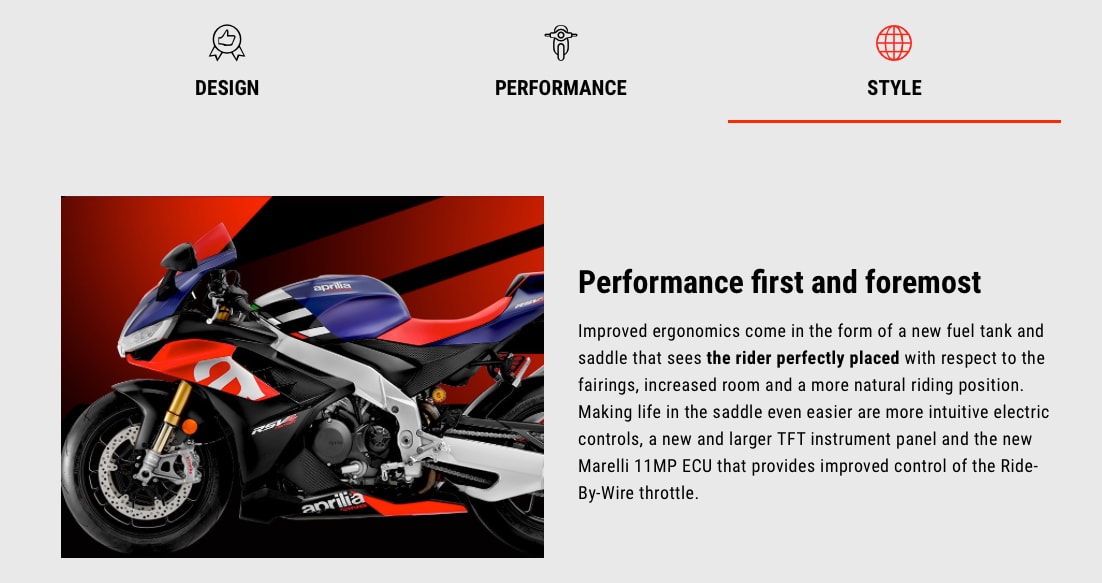 The ultra-fine chassis architecture, heir to a victorious dynasty that boasts 18 world titles and 143 Grand Prix races in the 250 class, has undergone a drastic change with the new swingarm, lighter and with a reinforced lower brace, inspired by the one on the Aprilia RS-GP used in MotoGP, designed to lower masses and increase the stability of the rear end in acceleration.
The first mass-produced, high performance narrow V4 in the world, the most revolutionary and powerful engine ever built by Aprilia, despite the Euro 5 emissions approval, gains more torque and confirms its exceptional maximum power level of 217 HP, thanks to targeted operations that include the new exhaust system and the increased effective engine displacement, previously 1,077 cc and now 1,099 cc.
Two versions are available: RSV4 (only in the Dark Losail colour scheme) and RSV4 Factory (in the two Aprilia Black and Lava Red colour schemes). Both versions are powered by the revamped 1,099 cc V4 engine, but they can be distinguished by the standard equipment which, for the Factory, includes forged aluminium wheel rims, the semi-active Öhlins Smart EC 2.0 suspension system and the Brembo Stylema brake callipers. 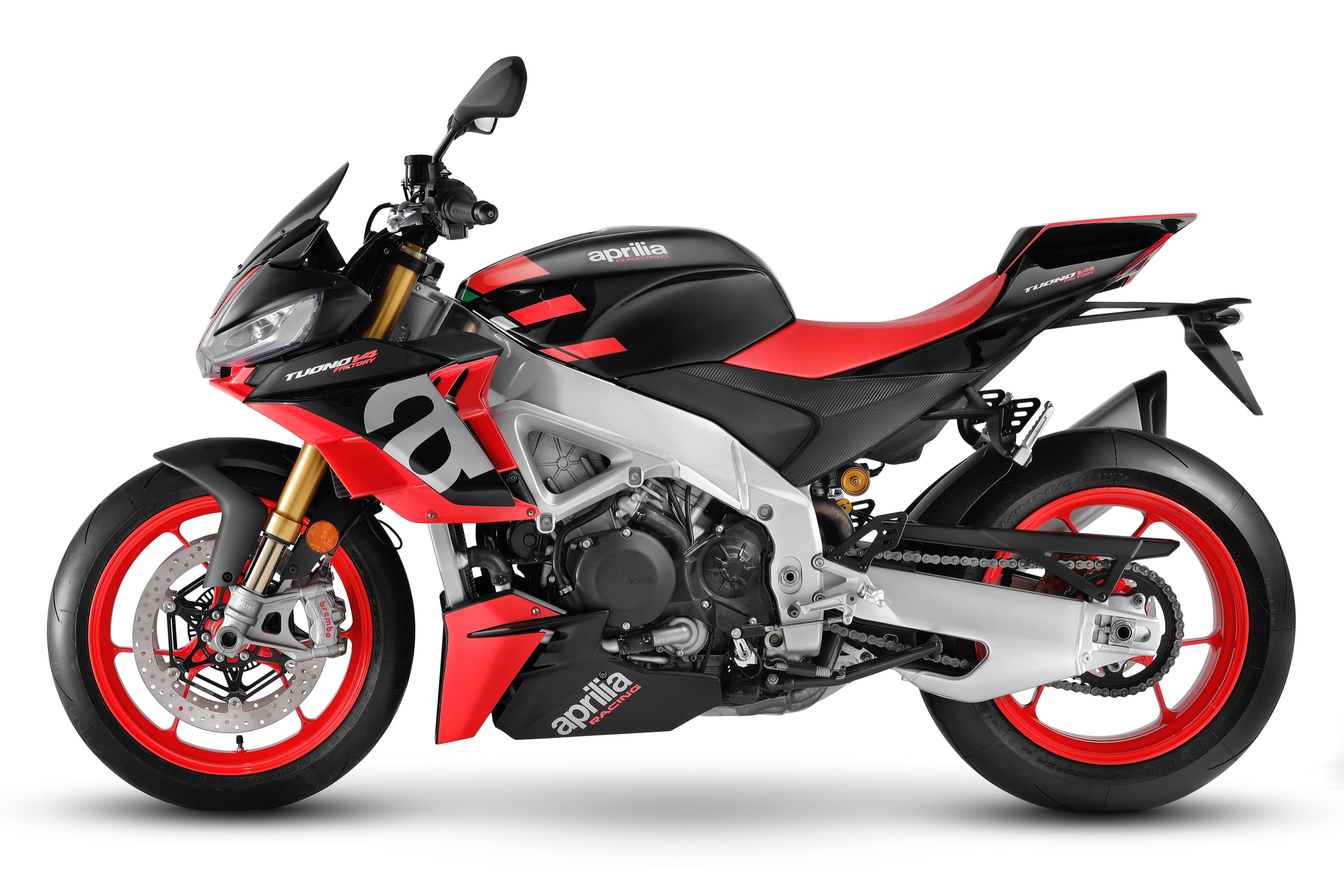 THE HYPERNAKED PAR EXCELLENCE UNVEILED ON APRILIA.COM PROFOUNDLY REVAMPED: NEW STYLE, WITH BUILT-IN WINGLETS, NEW AND EVEN MORE EVOLVED ELECTRONICS, NEW CHASSIS ARCHITECTURE WITH THE BRAND NEW MOTOGP-STYLE SWINGARM. IN THE NEW VERSION, THE INIMITABLE V4 ENGINE CONFIRMS THE 175 HP THAT HAVE ALWAYS LET IT DOMINATE IN THE CATEGORY. TWO VERSIONS: TUONO V4 HAS SOFTER ERGONOMICS, GAINS IN COMFORT AND IS PROPOSED AS AN ULTRA FAST STREET BIKE, READY FOR LONG ROUTES. TUONO V4 FACTORY CONFIRMS ITS STATUS AS THE DEFINITIVE HYPERNAKED, A RACING INSTRUMENT PERFECTLY TUNED TO DOMINATE ON THE TRACK TOO. 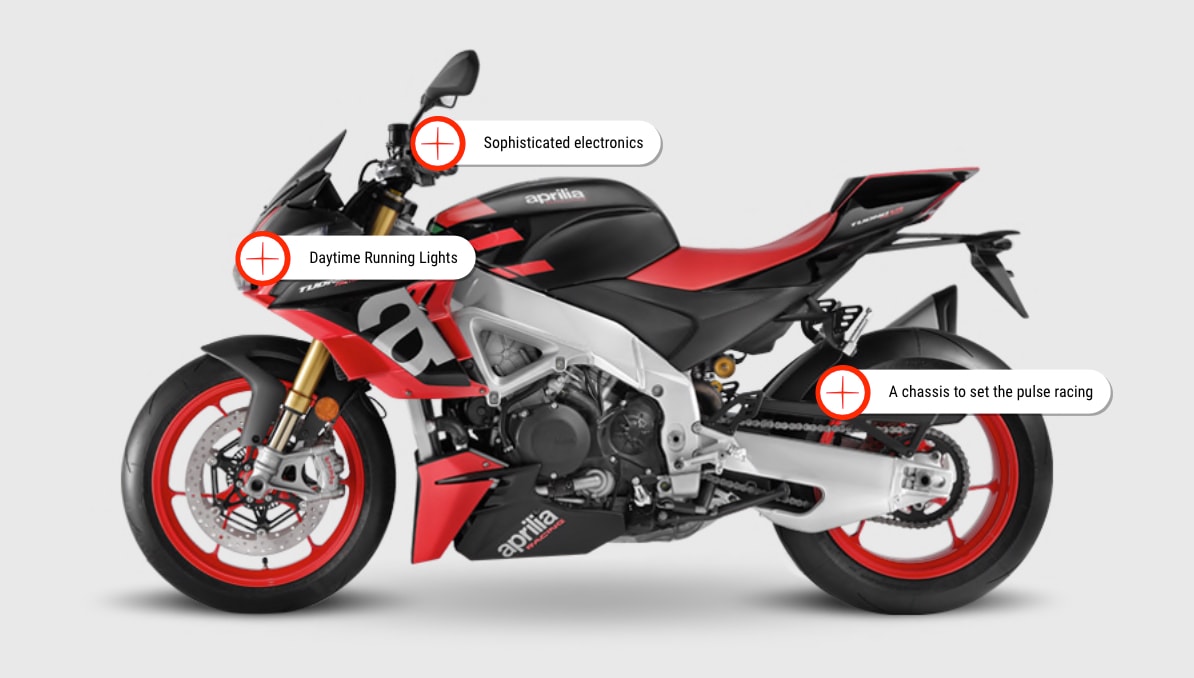 15 January 2021 - Aprilia Tuono V4 is the point of reference in the Hypernaked category in terms of effectiveness and feeling, whether in street sport riding or extreme track riding.
Tuono V4 now reaches never before seen performance and sophistication levels, thanks to Aprilia’s know-how gained over years of top-level competition and thanks to the experience of those who simply invented the Hypernaked category, starting from a superbike and creating one of the most adrenaline-charged bikes of any era, super fun on the road and unbeatable on the track.
The first big change for the new Tuono V4 family, on display for its global première online at APRILIA.COM, consists in the new and clear characterisation of the two models in the range. 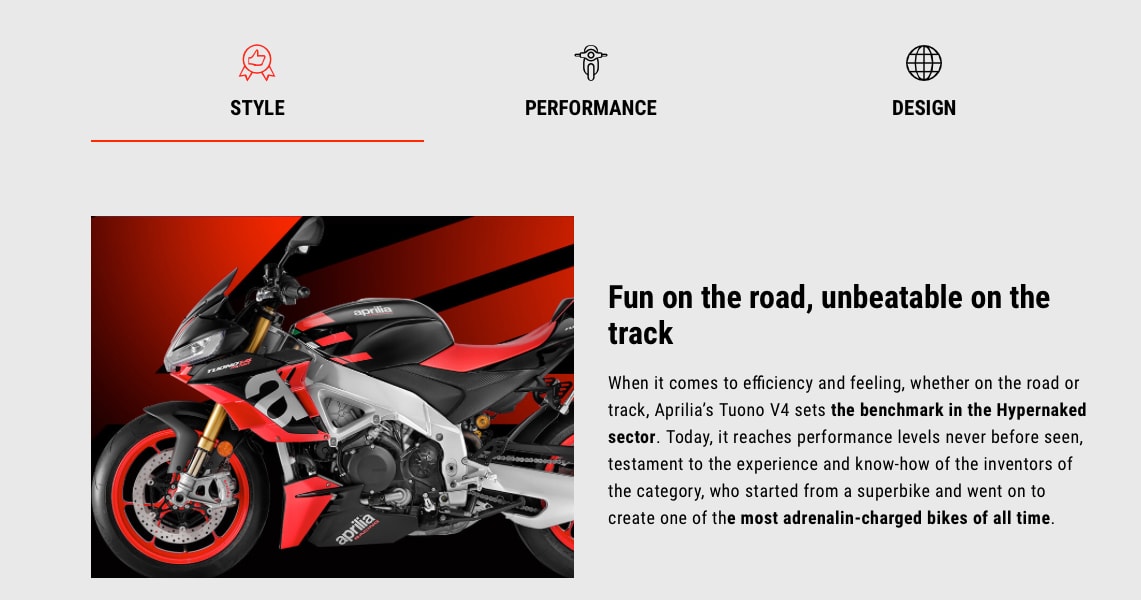 Tuono V4 (available in the Tarmac Grey and Glacier White colour schemes) adopts the characteristics of a street sport bike which also looks at longer routes. The comfort provided by the raised handlebar and the more protective top fairing is new and improved. The passenger is no longer a barely-tolerated guest and now benefits from an ample and comfortable portion of saddle and lower footpegs. Tuono V4 turns its thoughts to new horizons to reach quickly, so the available accessories include a pair of dedicated, asymmetrical panniers.
Tuono V4 Factory (in the Aprilia Black colour scheme) in its nature as an adrenaline producing machine confirms those strong sensations and pure, unadulterated fun. It is dedicated to an extremely demanding public and boasts exclusive components that include the Öhlins Smart EC 2.0 semi-active suspension system as standard equipment.
The style of the Tuono V4 is entirely new and inspired by the one introduced by RS 660, from which it inherits the innovative concept of the double fairing, featuring the aerodynamic appendix function.
As in the tradition of the Tuono V4, the design is characterised by reduced surfaces and the typical top fairing that houses the new triple LED headlight unit with DRL lights featuring the “bending lights” function. Being closely derived from the RSV4, the Tuono V4 also benefits from the new and refined ergonomics of the Aprilia superbike that provides more space for a better on-board fit for the rider, thanks to the new shape of the fuel tank and tail fairing.
The electrical controls are more functional and intuitive, and the new colour TFT instrumentation is larger and more complete. Thanks to the more powerful calculating power of the new Marelli 11MP ECU and the new, six-axis inertial platform, electronic management using the full Ride-by-Wire throttle has improved and the APRC operating logic has also been refined. 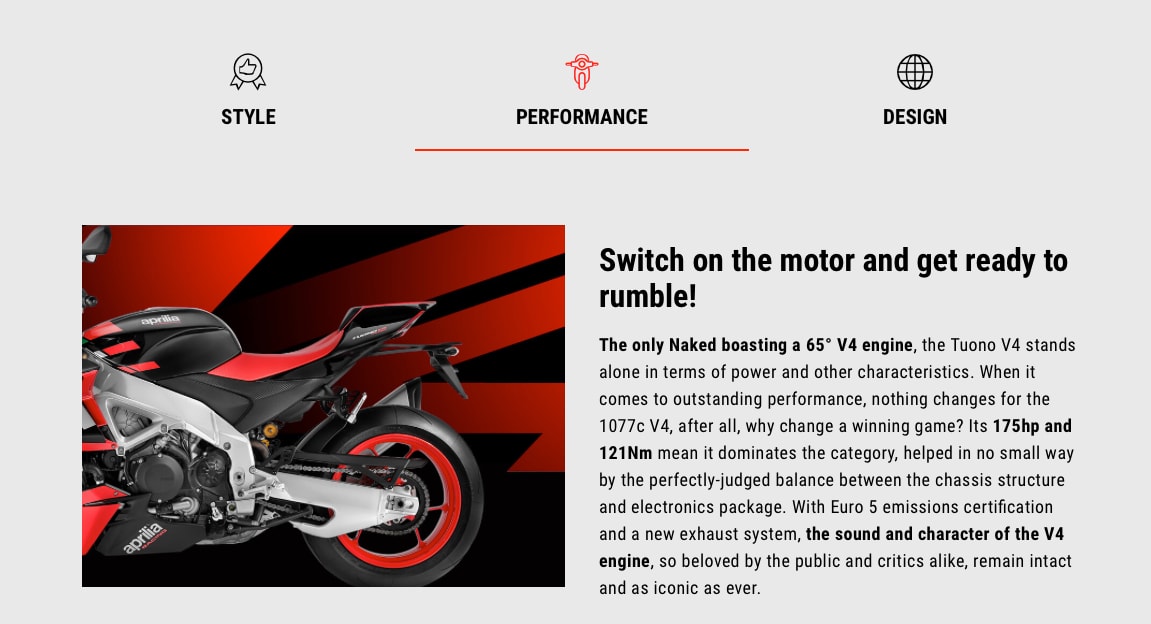 The exclusive Aprilia electronic controls suite, which has always been the best in the world in terms of effectiveness and technical sophistication, is now even more enhanced with the introduction of the adjustable engine brake control. There are now six Riding Modes, three for the track (including two customisable) and three for the road (including one customisable): the rider just needs to choose the Riding Mode that best interprets his or her riding needs to automatically obtain the best settings in terms of Traction Control, Wheelie Control, engine brake, ABS and the other managed parameters.
The chassis architecture, already recognised as the point of reference in terms of effectiveness and feeling, evolves significantly thanks to the arrival of a new and lighter aluminium swingarm with lower reinforcement brace. The new swingarm therefore adopts a geometry that has already been seen on the Aprilia bikes that dominated World SBK, then developed for MotoGP. The new component is designed to lower the masses and increase the stability of the rear end in acceleration. 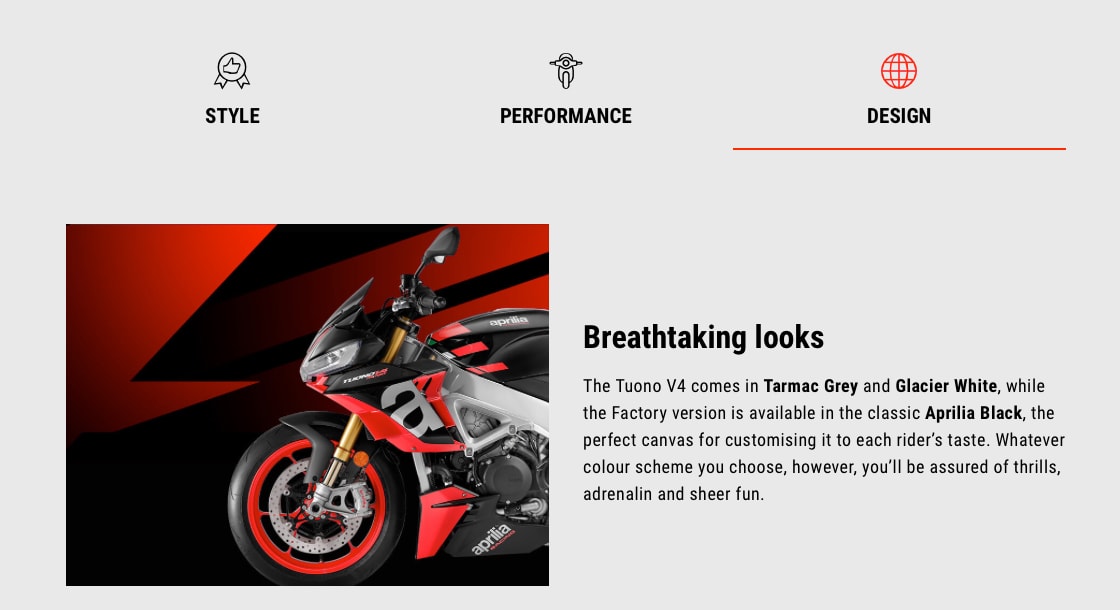 The Tuono V4 is still the only sport naked powered by a 65° V4 engine with unique characteristics. The 1,077 cc V4 from Veneto remains unchanged in terms of its already outstanding performance. Its 175 HP and 121 Nm of torque mean that it dominates the Hypernaked category, even when faced with competitors with more pure power, thanks to the extraordinary balance that the exuberant V4 creates with a chassis architecture and electronics package that have been perfectly tuned like no other vehicle in this category. Even with the Euro 5 emissions approval and a new exhaust system, the sound and character that the public and critics love so much about the V4 are confirmed.