NEW MP3. THE ONE AND ONLY

THE NEW PIAGGIO MP3 MAKES ITS DÉBUT IN PARIS, THE ORIGINAL AND MOST POPULAR THREE-WHEELED SCOOTER, A GENUINE ICON IN METROPOLITAN MOBILITY AND UNDISPUTED MARKET LEADER 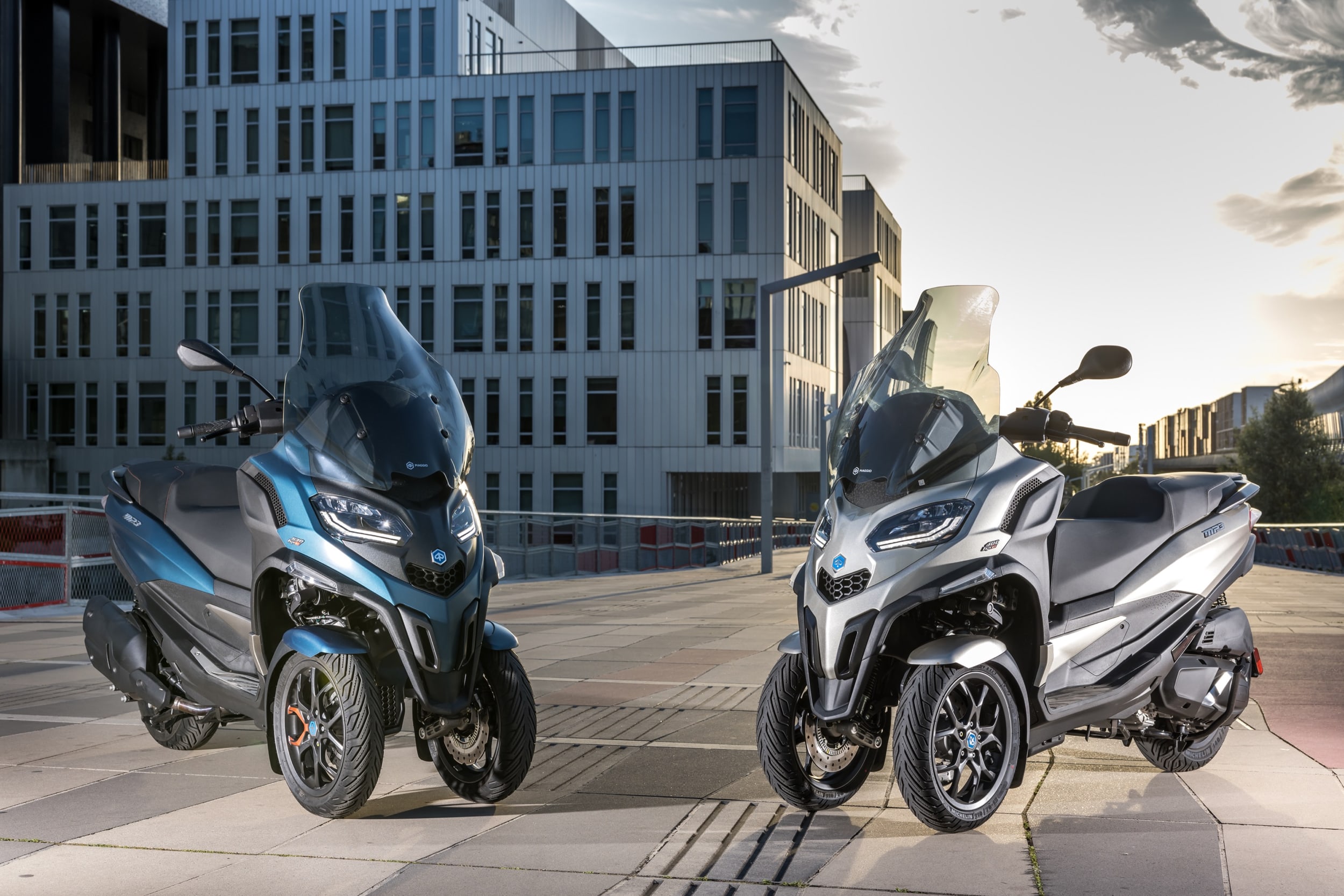 THE NEW PIAGGIO MP3 IS THE FIRST SCOOTER WITH ARAS ADVANCED RIDER ASSISTANCE SYSTEMS, DEVELOPED BY PIAGGIO FAST FORWARD – THE TECHNOLOGY RISES TO UNPRECEDENTED HEIGHTS, CONFIRMING PIAGGIO MP3 AS THE WORLD’S SAFEST SCOOTER. A NEW SPORTY DESIGN, ENHANCED STANDARD EQUIPMENT INCLUDING THE KEYLESS SYSTEM, CONNECTIVITY WITH NAVIGATION FEATURING MAXI COLOUR INSTRUMENT PANEL, AND – ON THE 530 EXCLUSIVE VERSION – CRUISE CONTROL AND REVERSE GEAR WITH VIDEO CAMERA. ALREADY AVAILABLE IN THREE VERSIONS POWERED BY TWO ENGINES: THE 400 HPE WITH MORE THAN 35 HP AND THE BRAND NEW 530 HPE WITH OVER 44 HP.

Paris (France), 29 June 2022 – The new Piaggio MP3 models made their début today in Paris, the city that symbolises the success of the original, world’s first three-wheeled scooter, which represents the finest, most tangible response to an ever-increasing demand for easy, fun and extremely safe vehicles for getting around the city and ever-expanding metropolitan areas in the greatest comfort. This success can be seen in the more than 230,000 vehicles sold in sixteen years worldwide. During this time, the MP3 was always the undisputed leader in the market that it created for itself, exemplifying the technological excellence of the Piaggio Group applied to scooters. Considered as the link between the worlds of cars and scooters and encapsulating the best of both, the Piaggio MP3 returns safer, more high-tech, luxurious and fun than ever before. 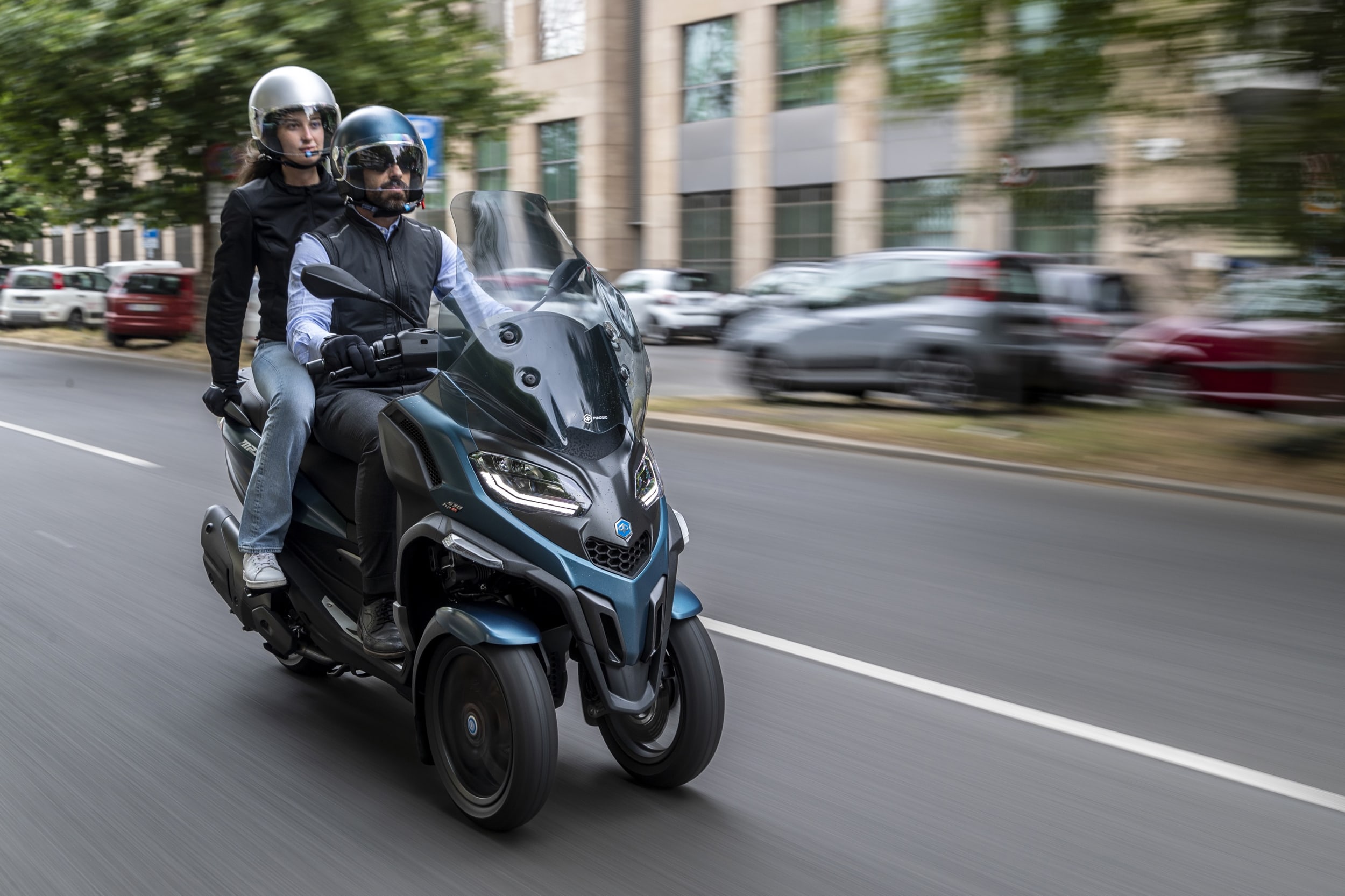 Made in the Piaggio factories in Pontedera, Italy, the models in the new Piaggio MP3 range are lighter, with higher performance, and have been technically overhauled. They’re equipped with the modern engines of the hpe family: the Piaggio MP3 400 hpe and Piaggio MP3 400 hpe Sport share the 400 cc variant with over 35 HP, while the range-topping Piaggio MP3 530 hpe Exclusive features the all new 530 hpe unit, with a record power output for this class of over 44 HP.

The design is now sportier than ever and even more automotive in inspiration, thanks to unique levels of finish and attention to detail; the full LED lighting system is new, as is the front shield, which results from extensive research into maximising protection against air. The riding position is now more comfortable thanks to the revamped saddle-footpeg-handlebar triangulation; the underseat storage capacity with electric opening heads up the category, with space for two full-face helmets. In order to remain at the cutting edge in terms of safety, all models are equipped with ABS and ASR; the equipment also includes the keyless system and maxi colour instrument panel, with the option of connecting a smartphone through the Piaggio MIA app. 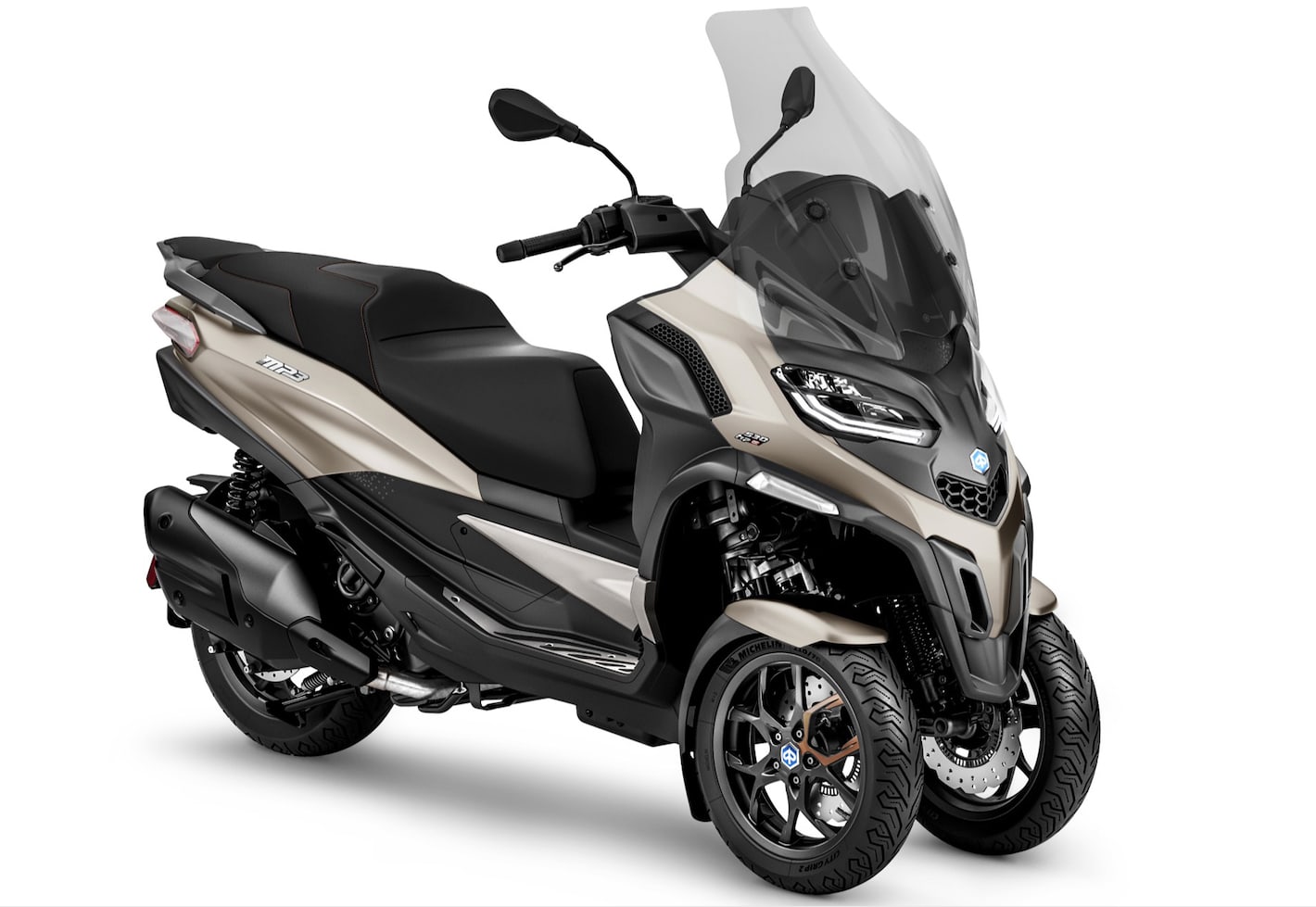 In keeping with its role as a great innovator, the new Piaggio MP3, 530 Exclusive version, is the world's first scooter featuring ARAS Advanced Rider Assistance Systems, with an innovative suite of rider aid functions based on Imaging Radar 4D technology developed by Piaggio Fast Forward, the Piaggio Group's robotics subsidiary. It’s the first time that these cutting-edge sensors have been developed for use on a scooter. 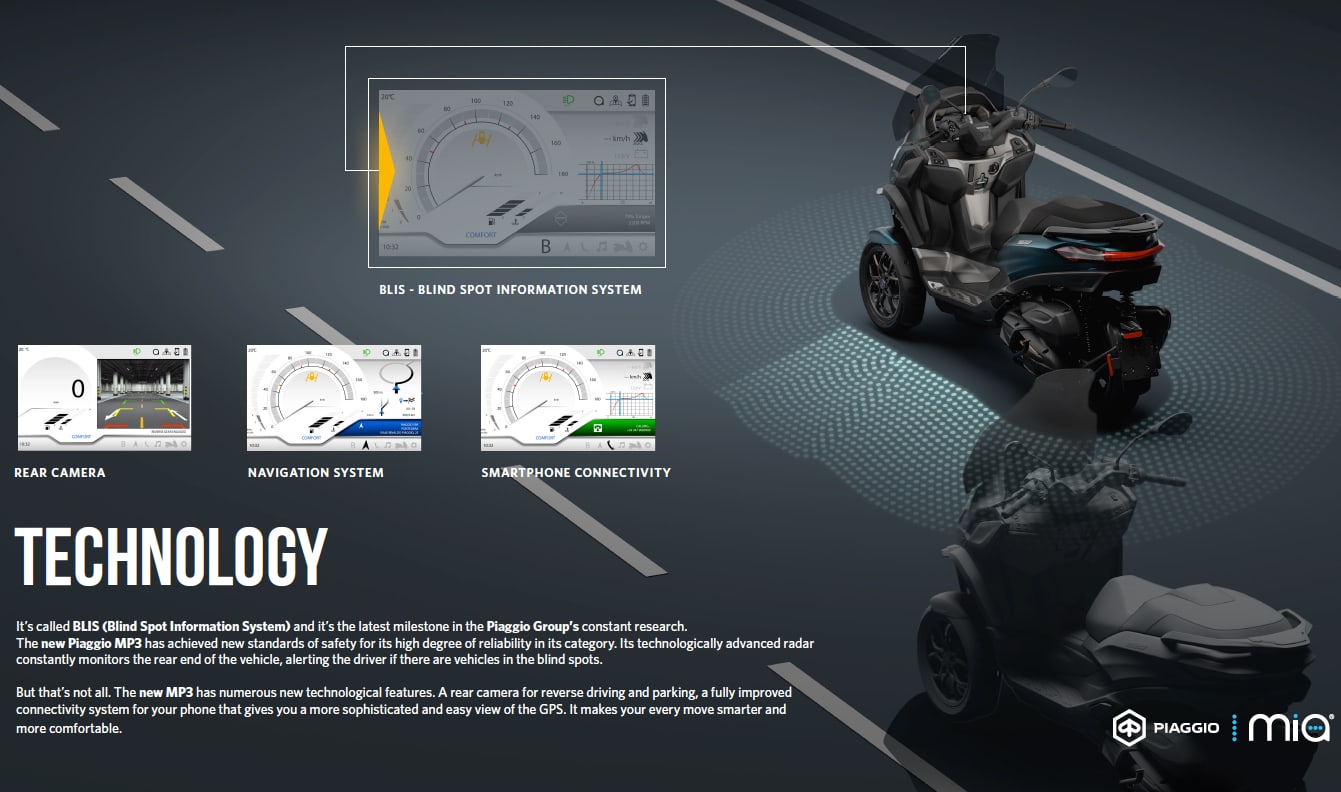 The ARAS devices play a fundamental role in active safety, guaranteeing the Blind Spot Information System (BLIS) and Lane Change Decision Aid System (LCDAS) functions. The BLIS notifies the driver of the presence of vehicles in the rear view mirror blind spot using specific notices on the TFT display. Constantly monitoring the rear area at a distance of up to 30–35 metres, the LCDAS is also capable of identifying the vehicles which are approaching quickly laterally, creating a potential risk situation in the event of lane changes. In this situation, the driver is also notified through a specific notice on the instrument panel. 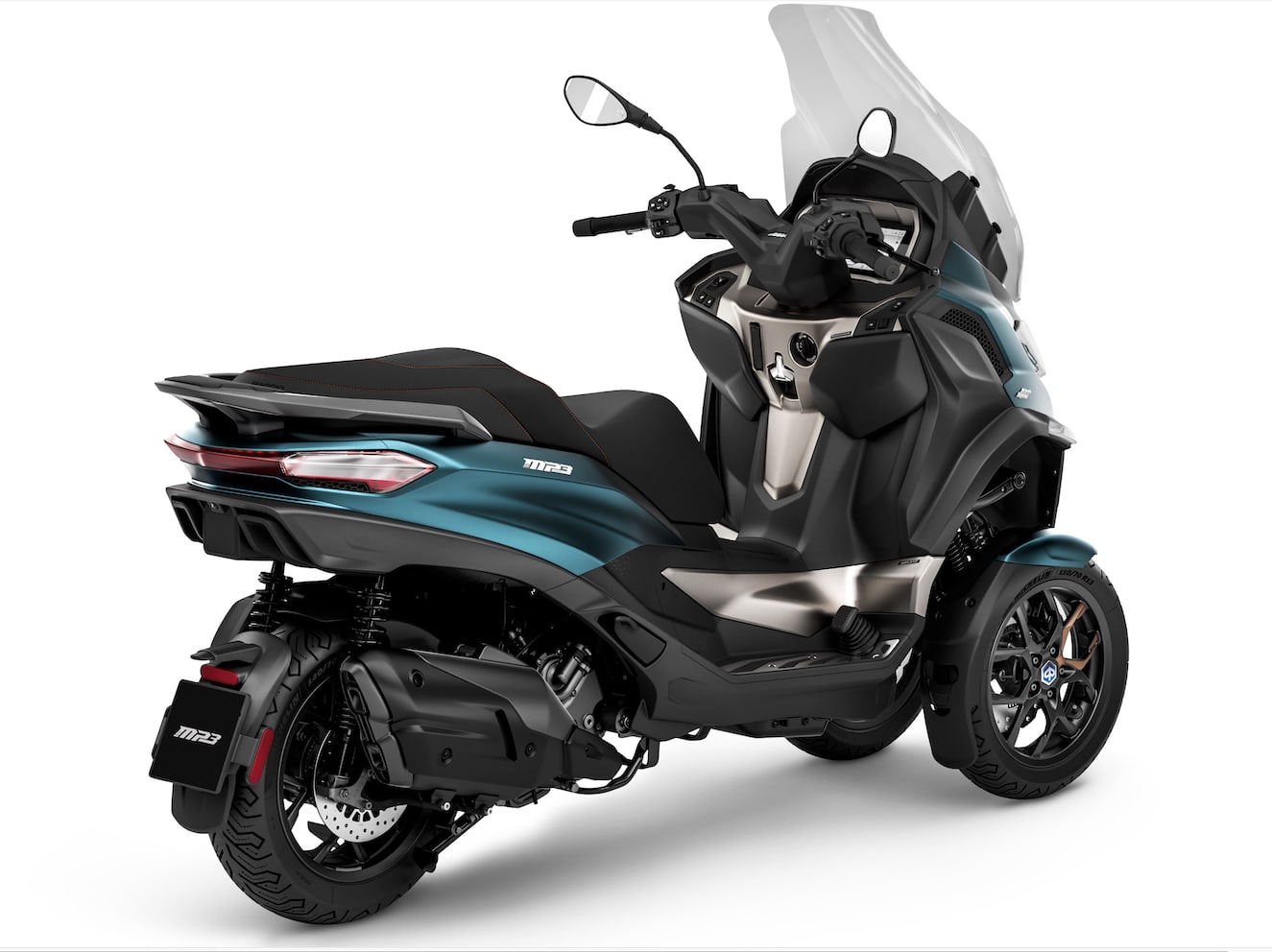 Reverse gear is another unique feature of Piaggio MP3 530 Exclusive and it now includes a rear video camera which allows for even easier and safer use. The wealth of standard equipment is rounded off with cruise control that can easily be managed using the new electric handlebar controls and the three Eco, Comfort and Sport riding modes, capable of modifying the response of the Ride-by-Wire throttle control as well as defining the calibration of the ASR anti-slip system. 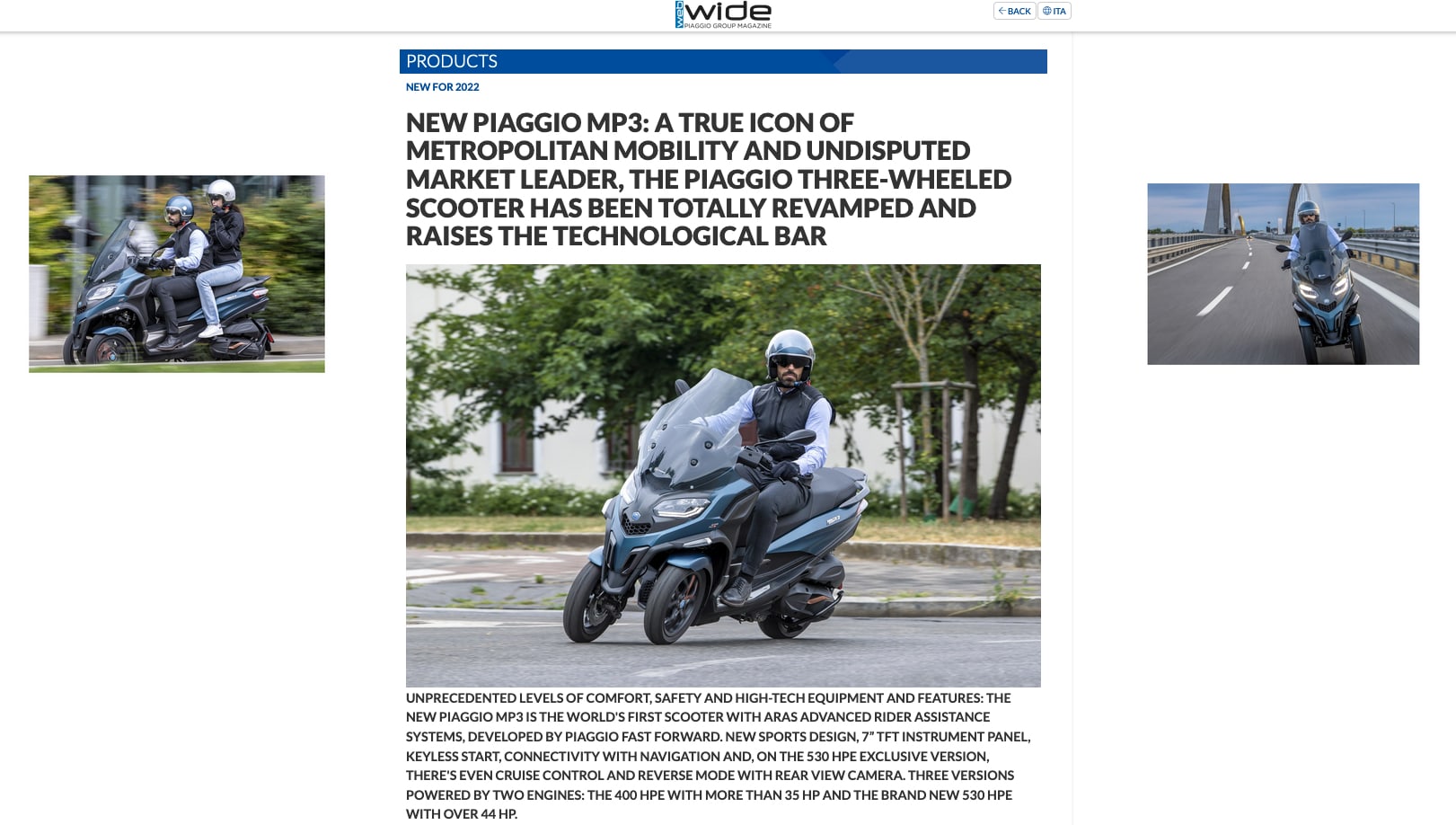