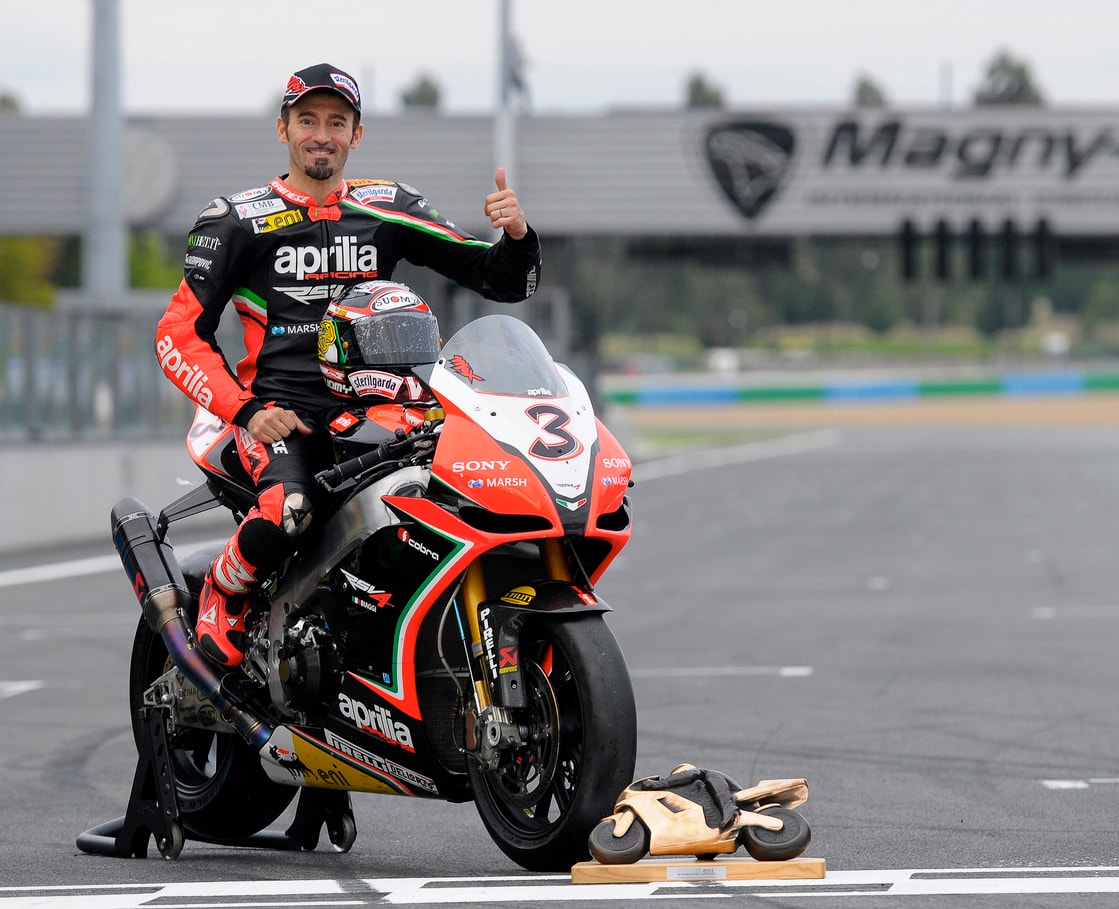 SIX-TIME WORLD CHAMPION AND THE MOST SUCCESSFUL RIDER IN APRILIA'S HISTORY. THE ONLY ITALIAN WSBK CHAMPION ASTRIDE HIS AMAZING RSV4. 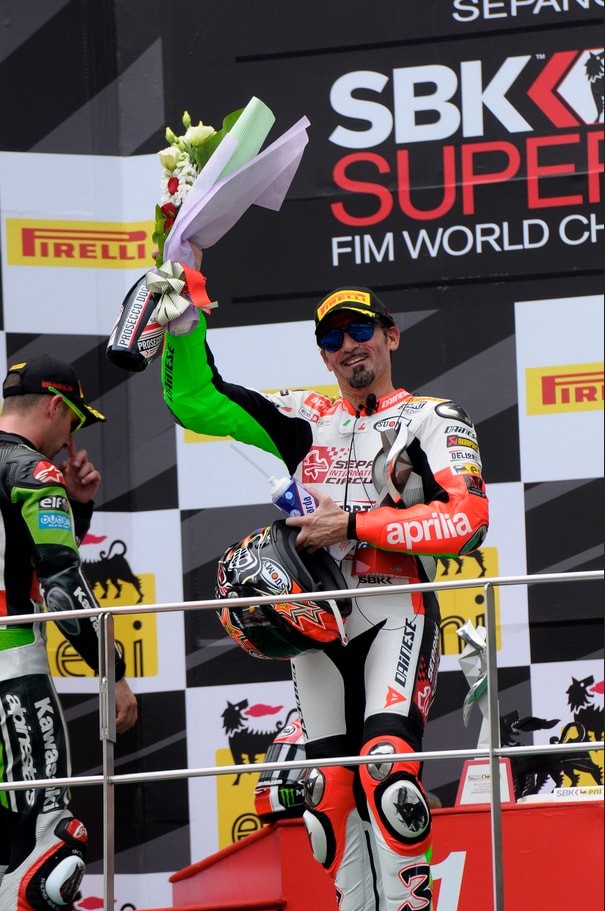 June 2021 - An important occasion, an umpteenth milestone achieved by a great champion: six-time world champion Max Biaggi turns 50, or perhaps it would be better to say that he has completed 50 seasons. The Roman’s life has been marked by wins on tracks all over the world. Many of these proudly bore the Aprilia name, a brand for which he is now a popular ambassador. 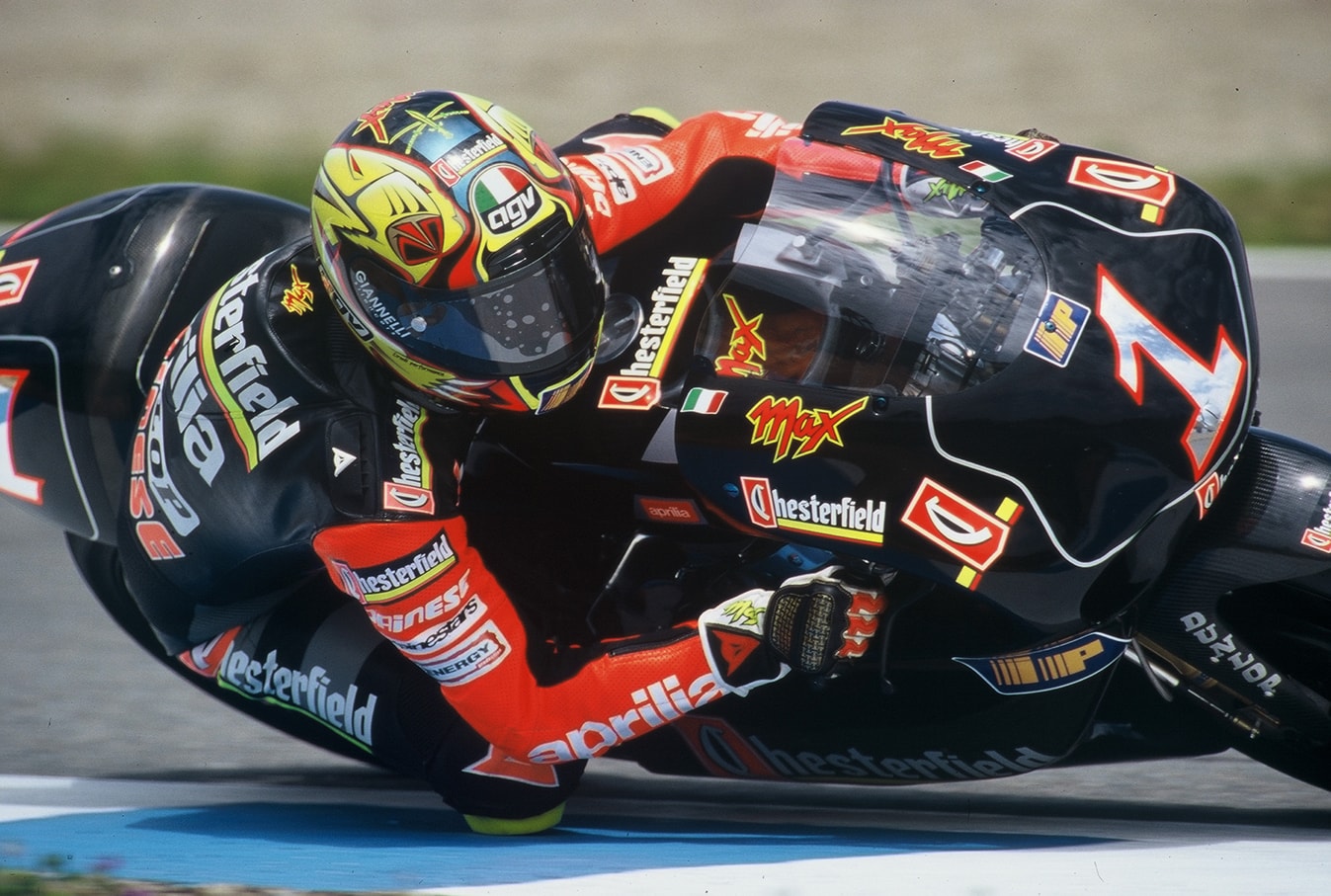 From the roaring years of his four consecutive world championships in 250 to his return to Superbike in great style, Max and Aprilia share a long history. The first to ride the “quarter-litre” from Veneto to a world championship title, the first Italian (and on an Italian bike) World Superbike Champion, the list of firsts is long and lends merit to the value he demonstrated on the track. Without following the traditional path, making a rather late début as compared with the usual practice of grooming pure natural talent. All the way to his return to the podium with a wild card in the 2015 Malaysia WSBK round, almost three years after his retirement, that has all the flavour of a legend.

Greetings to the Champion!

It’s a pleasure to remember him on the occasion of a special anniversary for Max Biaggi, the man, to whom all of Aprilia and the Piaggio Group send their best wishes. 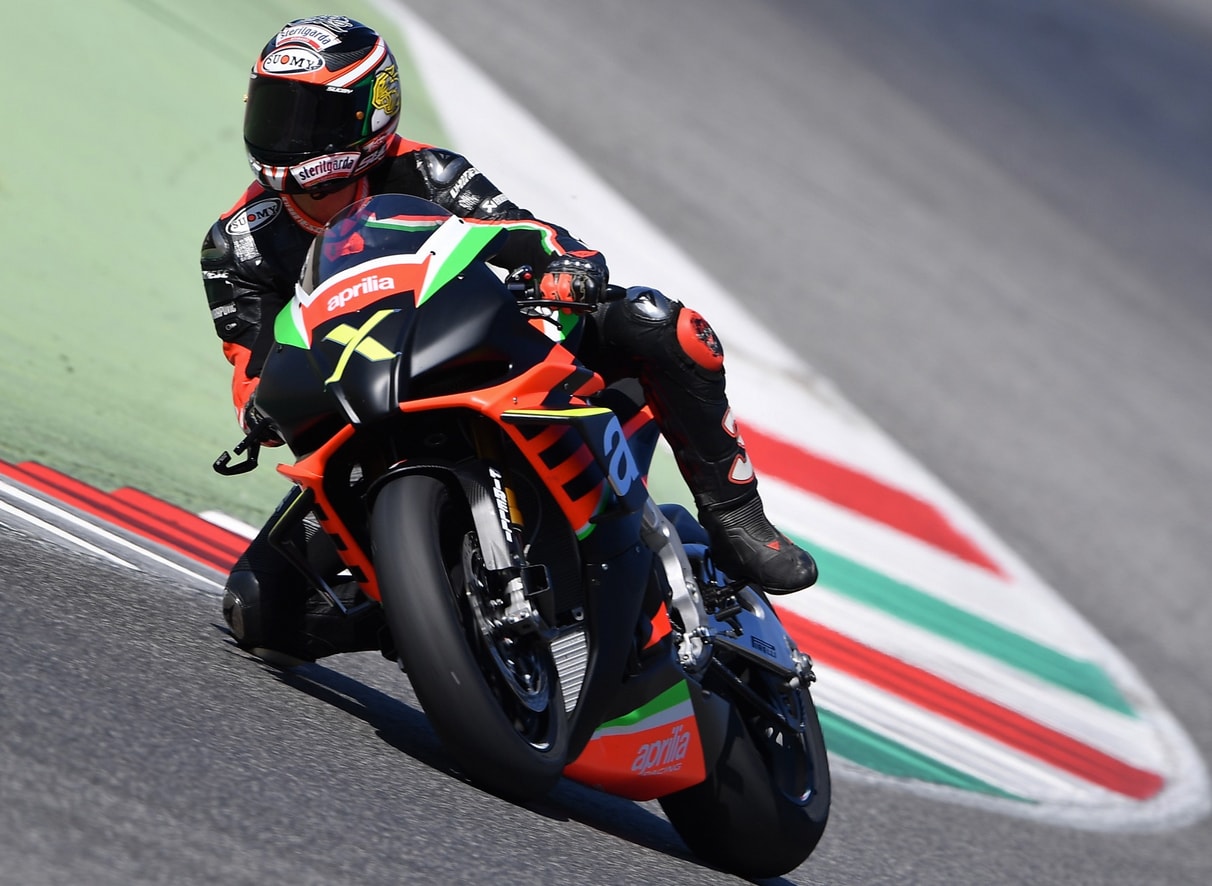 MAX BIAGGI: “This is also a nice milestone and it’s great to celebrate it with so many friends, with the entire Aprilia family, and to celebrate it along with the many victories that we have taken on tracks all over the world. I am especially proud to have been the most victorious rider ever for Aprilia and adding two SBK titles to my trophy case is truly a particular feeling, because we won them many years after the world championships won in the 250 class. Just like having marked two very different and very important eras with those wins. But I must say that I am always thinking of the future and the challenges that await us. With Aprilia and with many friends who are riders and former champions, I still love and frequent the track. Putting myself to the test and always being fast is a goal that I hope I’ll never lose. See you on the track, at my next outing on my RSV4.” 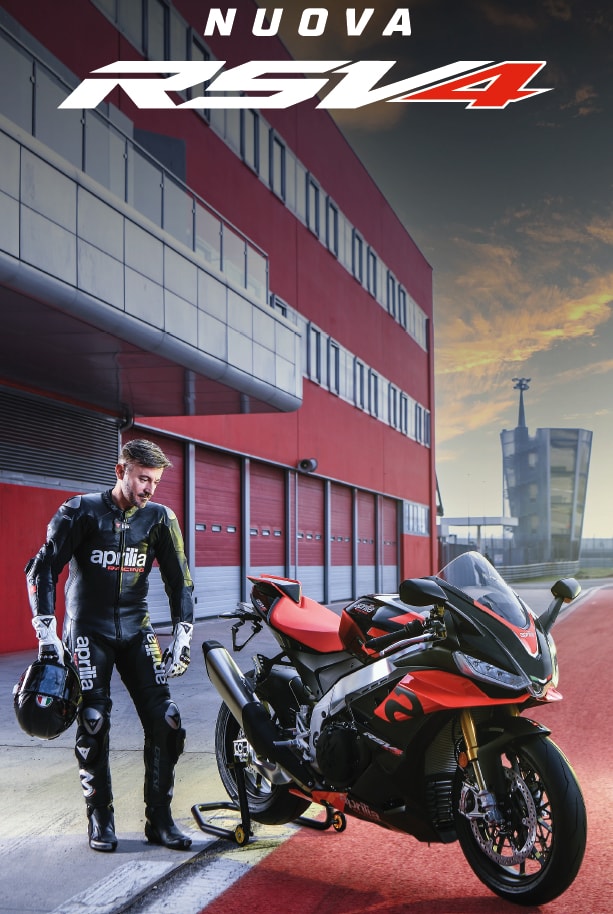 Max Biaggi, Roman, born in 1971, begins his motorcycling career in 1989 at 18 years of age making his début in the 125cc category. One year later he is already the Italian champion in the "Sport Production" category.  Max, immediately held in high esteem for his efficient and clean riding style, Max shows his talent each time he changes categories. In 1991 he is already racing in the 250-world championship with Aprilia. The 250 title in 1994 is the first of an exceptional hat trick where he dominated astride the Italian bike through 1996. 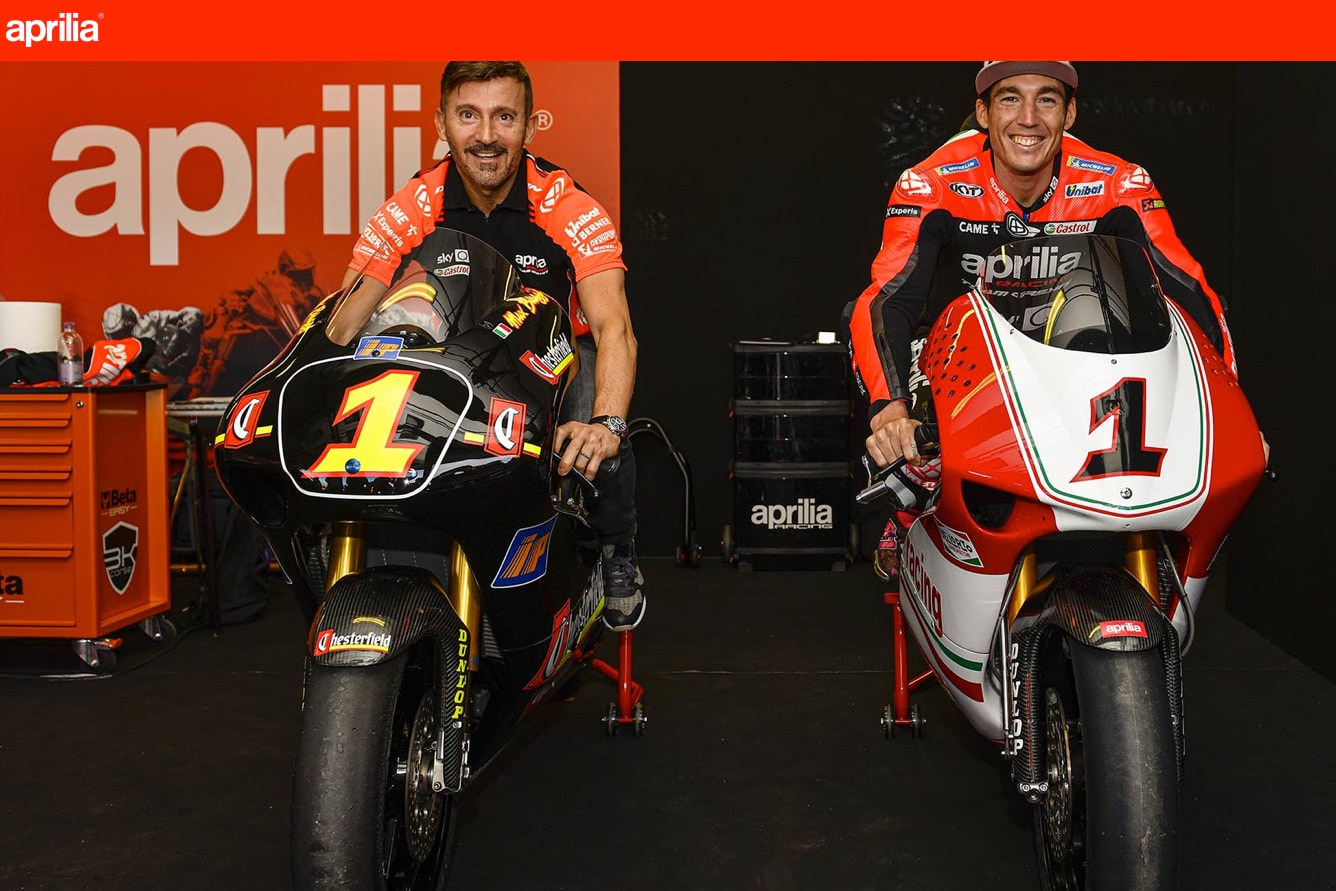 In the “quarter-litre” category, Max catalogues results that are unprecedented in the history of World Championship Motorcycling: the most ever pole positions, the most podiums in the category and 4 world titles won (three with Aprilia) consecutively from '94 to '97.
In 1998 he makes his début in the 500 category on a Honda. His entrance on the scene at Suzuka is a memorable occasion when he takes a triple victory: pole position, first place and the fastest lap in the race, an accomplishment which had only ever been achieved by the Finn, Jarno Saarinen, 25 years earlier. At the end of the season Max will come in second place in the world rankings.
In 1999 Biaggi moves to Yamaha and begins a progressive ascent. He places fourth in the rankings his first year, improving in 2000 with third place and then growing again in 2001, ending the season in second place. The 2002 season ends the same way, marked by the change in rules for the premier class and the birth of MotoGP.  In 2003 when Biaggi moved over to Honda, he ranks third with the Sito Pons private team. In 2005 he is the Repsol HRC team rider. 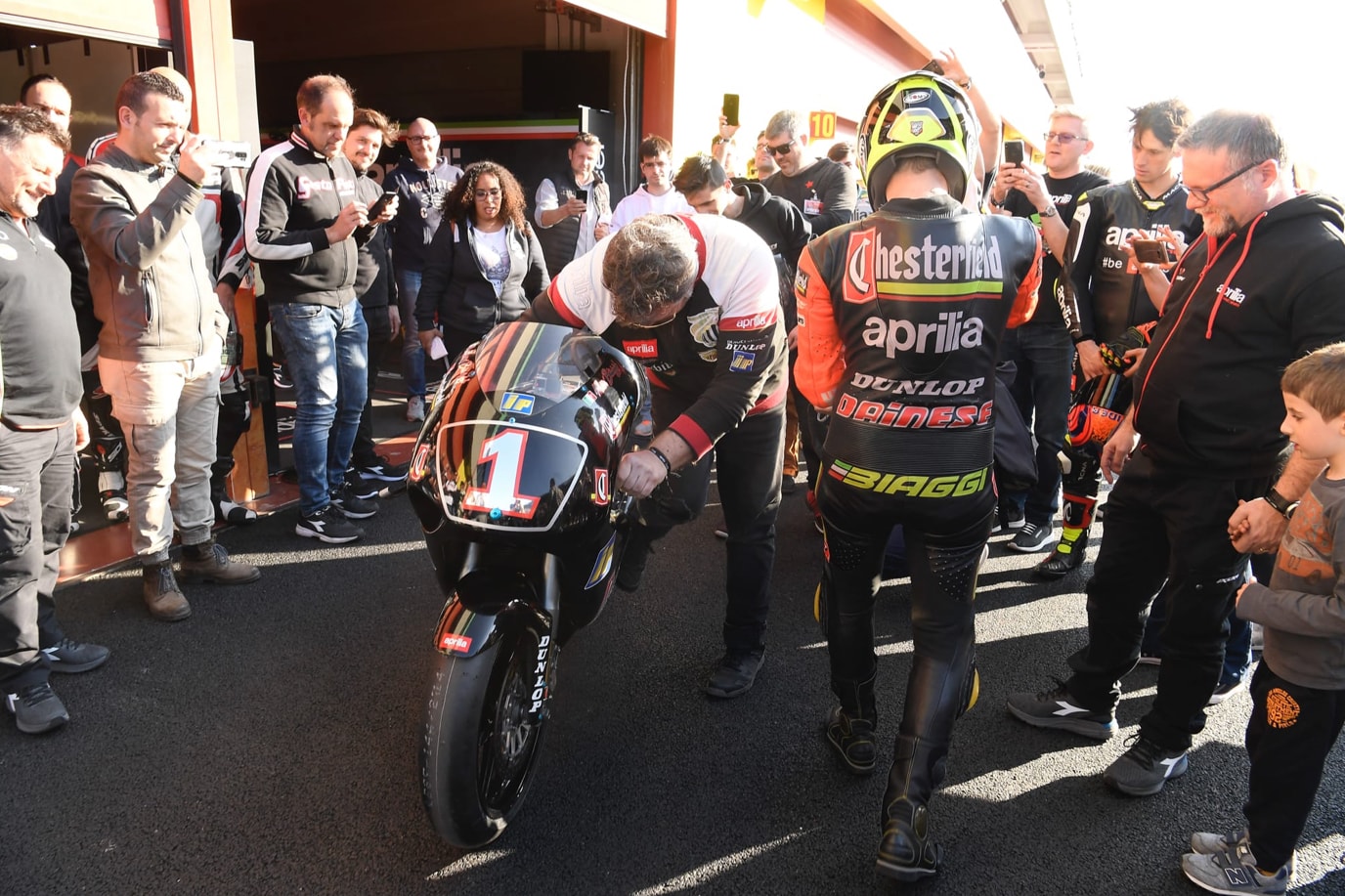 Here (on the left of the picture can be seen the unforgotten Fausto Grassini) and in the photo below: Max Biaggi attended the big event “Aprilia All Stars”, Mugello circuit, March 2019.

In 2007 Max made his Superbike début with Suzuki. Once again, Max astonishes everyone from the outset on the Qatar track. He wins Race 1 and takes second in Race 2. The season is characterized by the battle for the championship, with Max missing the title by just eight points.
In 2009, Biaggi comes back to Aprilia to ride the futuristic Aprilia RSV4 that marks the Noale-based manufacturer’s return to World SBK. Aprilia had never before won the WSBK title and with the new RSV4 attempts the assault on the championship in the races reserved for large-engine four-stroke bikes. 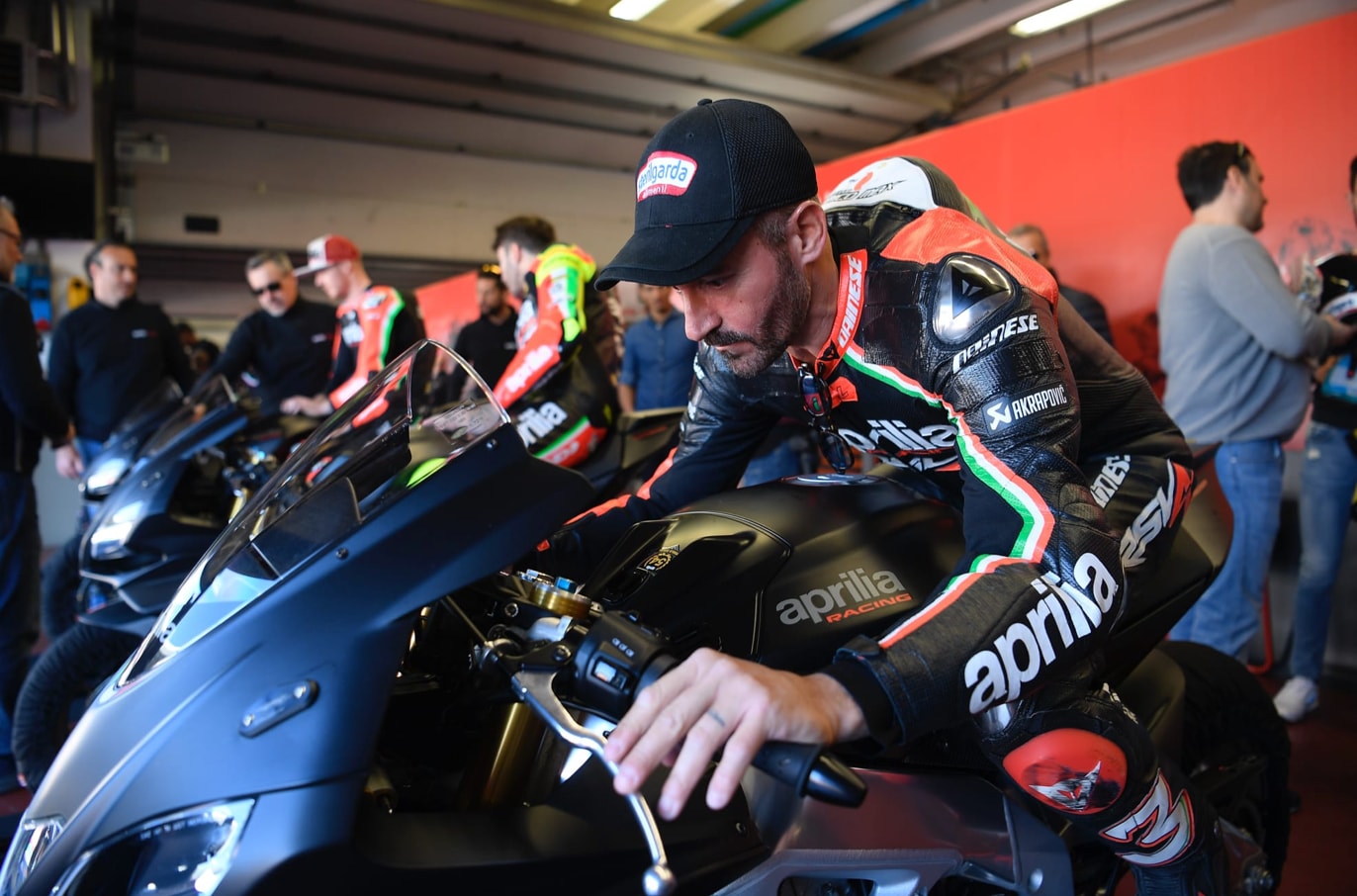 It is a triumph: Max rides the Italian V4 to victory in the rookie season and dominates in 2010 and 2012, earning a double world title - Rider and Manufacturer - the first and only Italian to succeed in this undertaking. He retires from racing after the 2012 title with six career World Titles under his belt, but the call of the track brought him back to racing in 2015. Riding as a wild card in the World SBK Malaysian round, he made an extraordinary podium finish on the Sepang track, reiterating (at 44 years of age and almost three years after his last race) the talent of a champion and the competitiveness of the Aprilia RSV4 project.