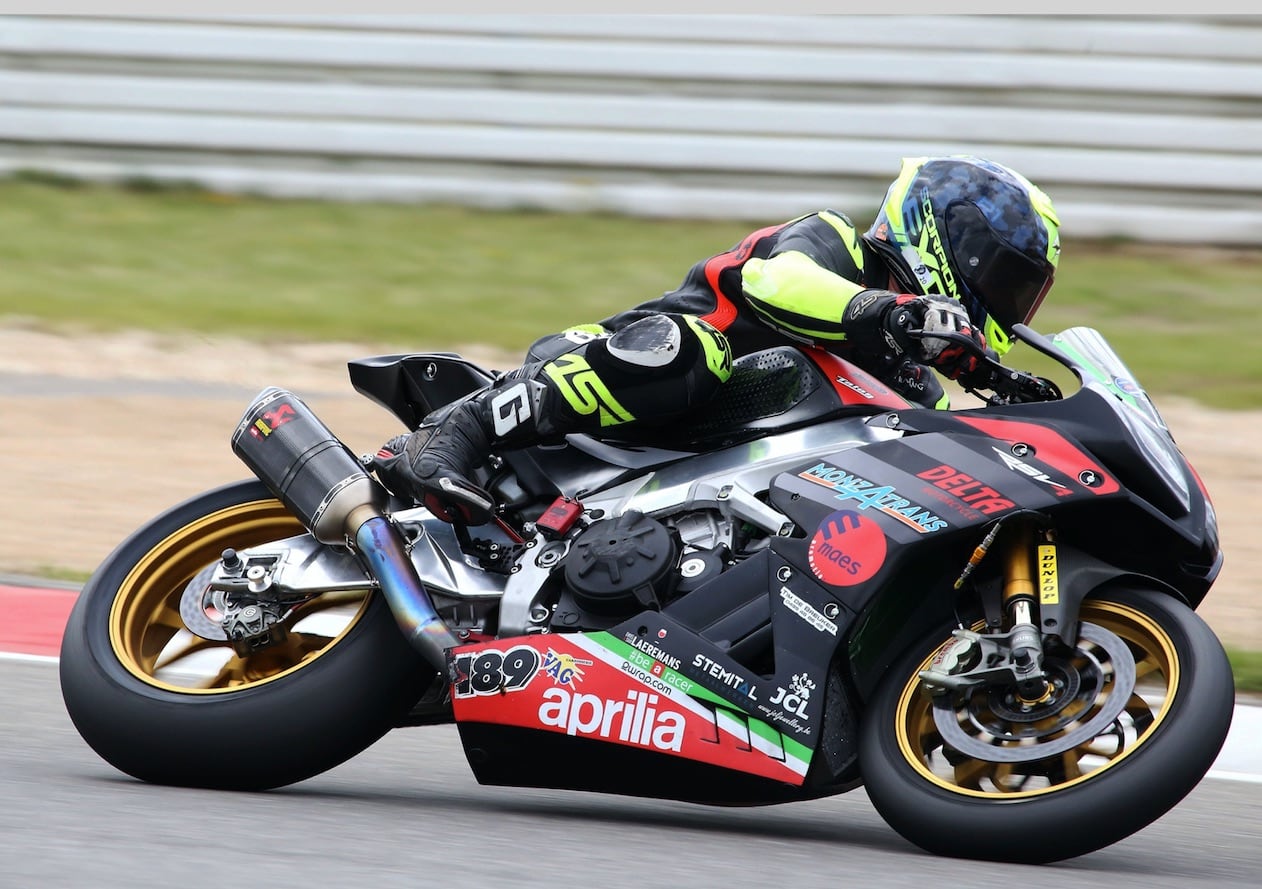 3-5 July 2020 - On the legendary Nürburgring GP circuit in the Eifel, Sander Claessen (photo above) won both races of the opening round of the Belgian Superbike Championship and the Benelux Trophy 2020. It immediately gave him the lead in both rankings. The Benelux championship is shortened to three weekends instead of seven. After the Nürburgring there will be races on the GoodYear circuit in Colmar-Berg and on the TT-race track in Assen. 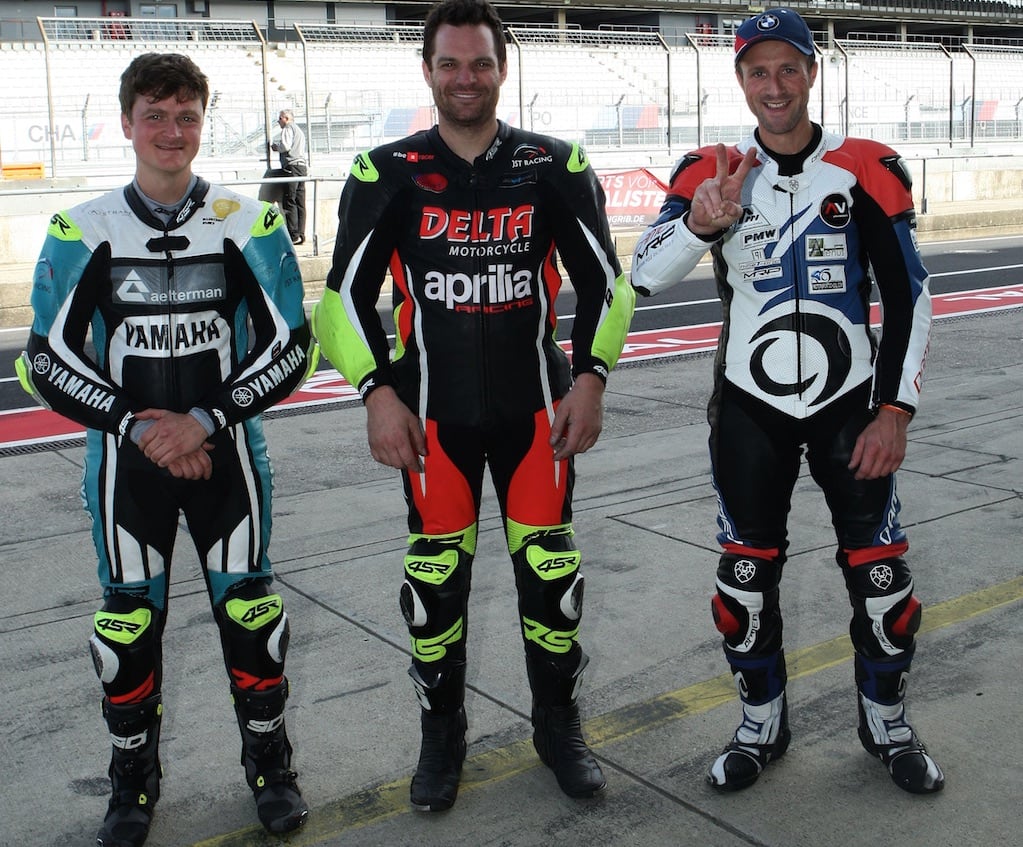 No less than 43 riders were at the start in Nürburg, among them, also teammate Denny Lannoo, who first started at an Aprilia RSV4 Factory, but can also boast a solid racing career. The most beautiful field of the last few years for a race of a Benelux Trophy championship race, drove in front, of the empty stands of the more than 5 kilometers long Nürburgring "GP-strecke", because of the Covid-19 measures in Germany. That gave a somewhat strange impression to the riders and the scarce journalists. 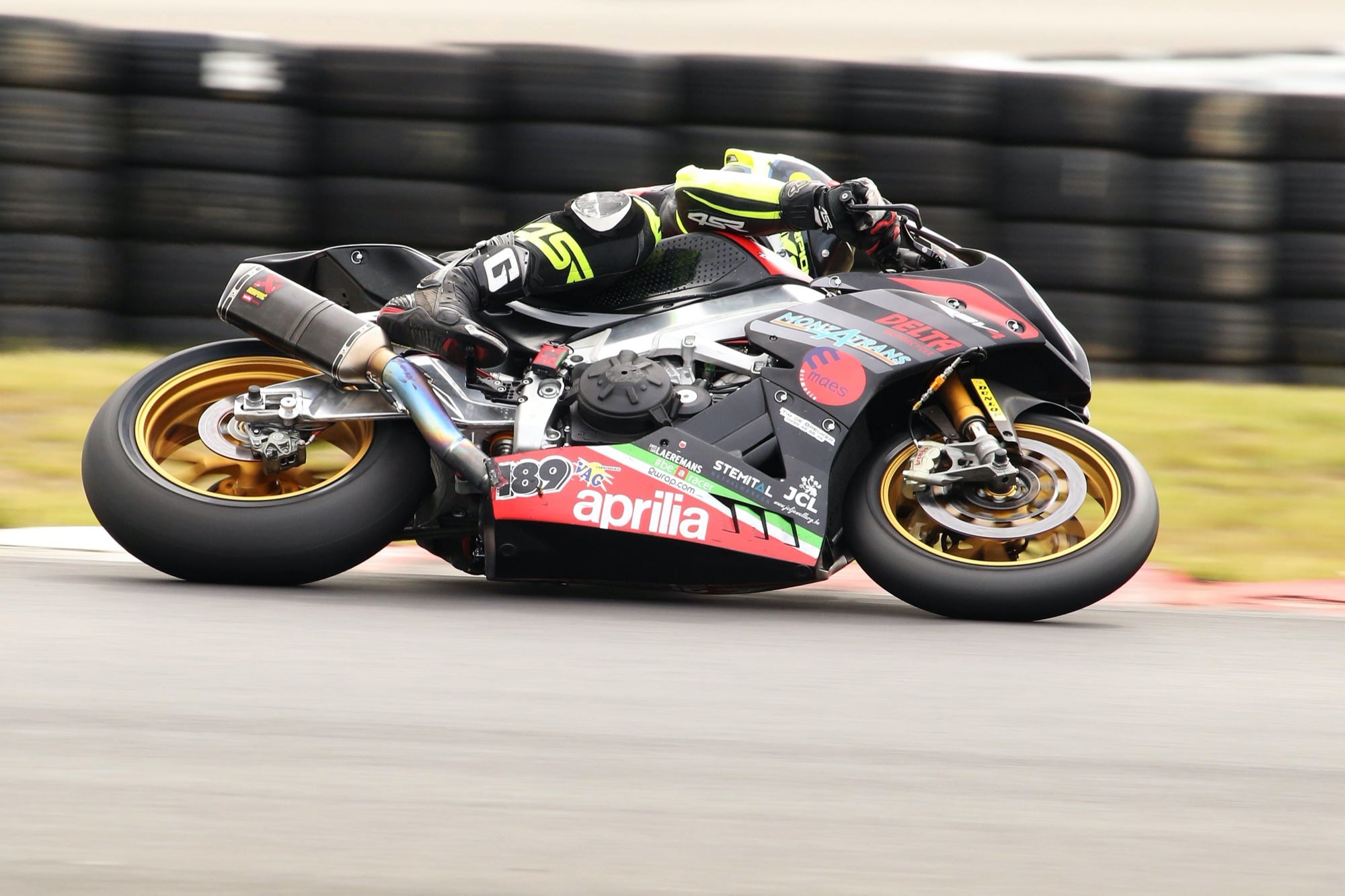 Sander Claessen # 189: “It was a very exciting qualifying ride, on Friday, late afternoon and under a warm sun, resulting in high asphalt temperatures. I knew it had to happen at that time, because the second qualifying was on Saturday, early in the morning. The laptimes would no longer be improved because of the colder temperature at that second qualification. I gave all what was in me and drove the best time with barely a lead of 0.019 "over Bram Lambrechts, riding in the EWC in a not so distant past." 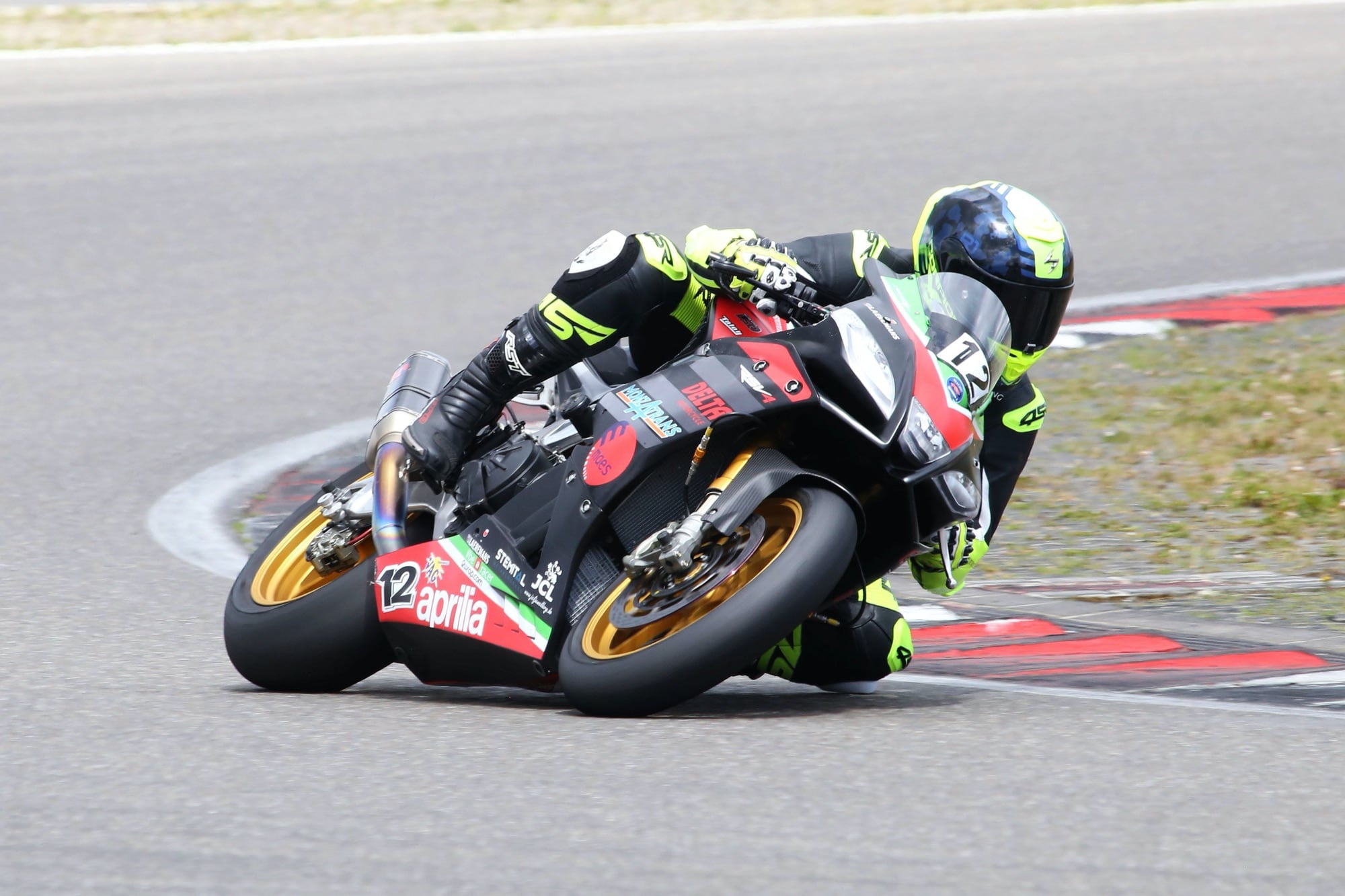 Denny Lannoo # 12: “It's a big change for me, switching to Aprilia, but I don't regret it for a minute. Fortunately, after the confinement because of the Corona restrictions, I was able to do a lot of practice rides in recent weeks, on the circuit of Zolder (Belgium) and get into the right rhythm.”

Before the season started, a training week was organized on the circuit of the Spanish Alcarras and that ended with the beginning of the world pandemic. But just ended well, when the team could go back to Belgium.
Sander Claessen # 189: “The final day of the five days was cancelled by order of the Spanish authorities. We had to load everything head over heels and we immediately flew back. The Spanish borders were closed a day after the truck with the engines arrived in Belgium. This way our preparation was not compromised, and we were able to do some fine tuning of the RSV4 bikes. Even later it was raining cancellations of races. It is a pity for riders, sponsors and the public, who want to see races. When the circuits in Belgium and France reopened, we really could start the final preparations for the season.”

RACE 1. Aprilia rider Claessen left from pole position and soon moved away from his opponents. Whatever reigning SBK champion Yan Ancia did on his BMW and Côme Geenen, ex-European KTM Cup winner, they could not prevent Claessen from taking the win. With a big lead of seven seconds he drove across the finish line. Claessen also improved his lap record during this race to 2: 01.302. Denny Lannoo was in seventh position all race, after he started from ninth place and third row on the grid.
RACE 2. Later on the day, Claessen added another victory. After the skirmishes in the opening round in the many corners of the Mercedes Arena, Claessen drove from third place to the lead. First, he caught up with Ancia and a lap later he took over the first place from the fastest starter, Geenen. Claessen controlled the race and was no longer threatened even though his lead was smaller than in race 1. Lannoo started fifth but crashed in the seventh lap, just over half race.

Sander Claessen # 189: "When I took the lead in the third round, I no longer took unnecessary risks and received the necessary information via the team crew's pit board to consolidate the victory and the maximum points win."
No podium ladies, no flowers, no cups, thanks to the circumstances, but instead big smiles in the Aprilia Turnhout Racing Team. 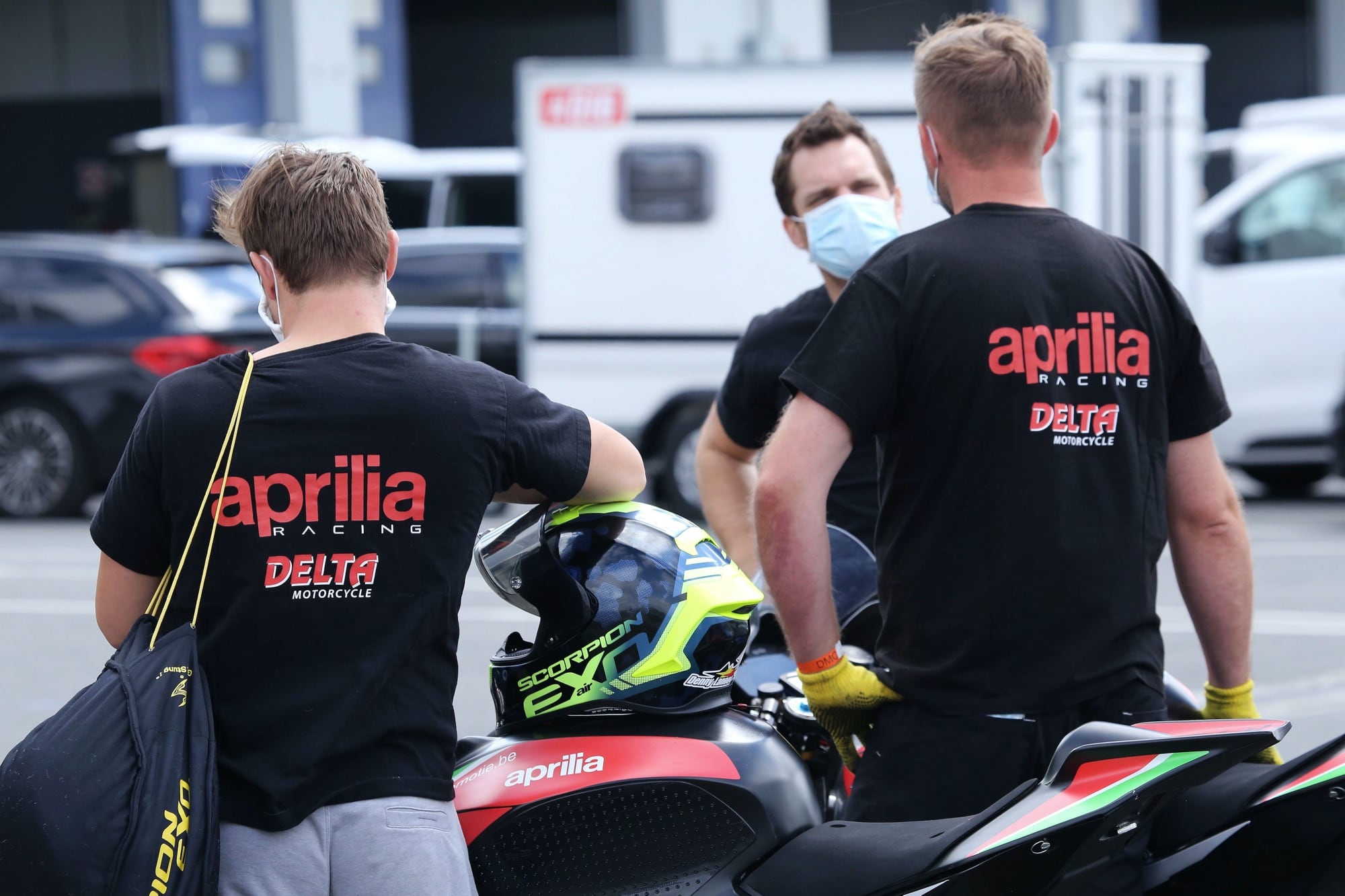 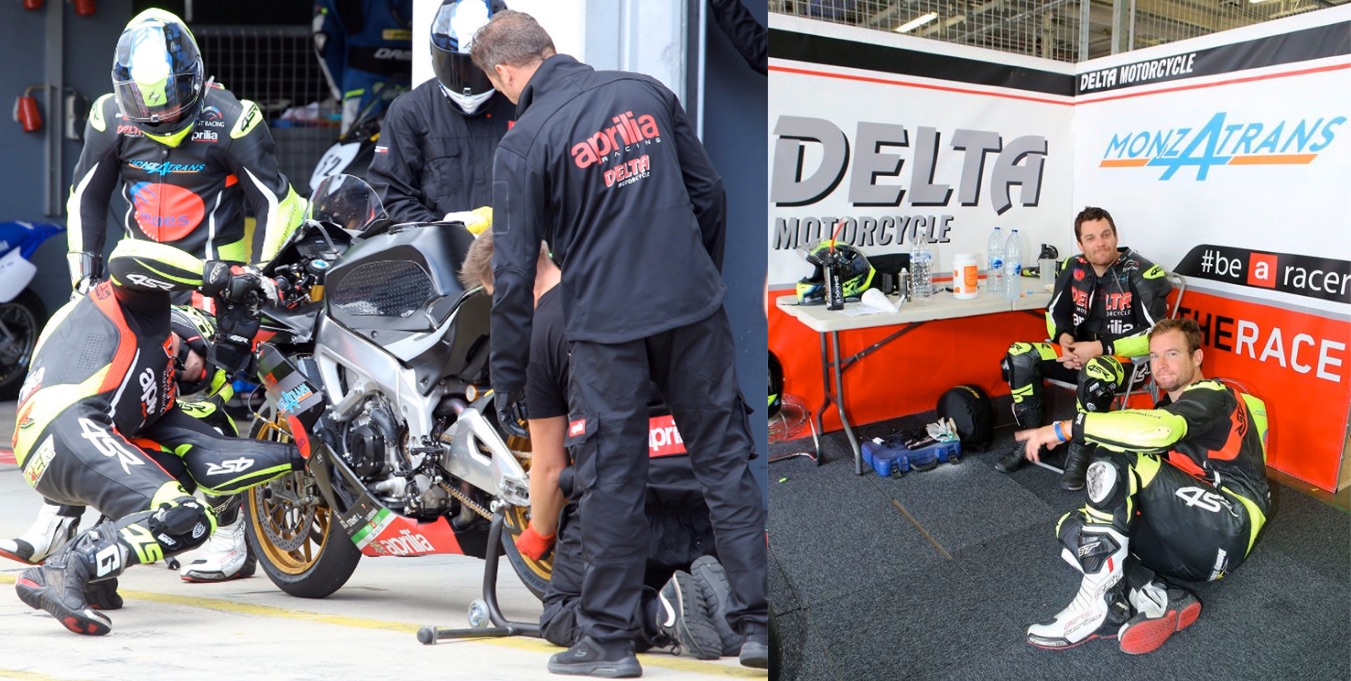 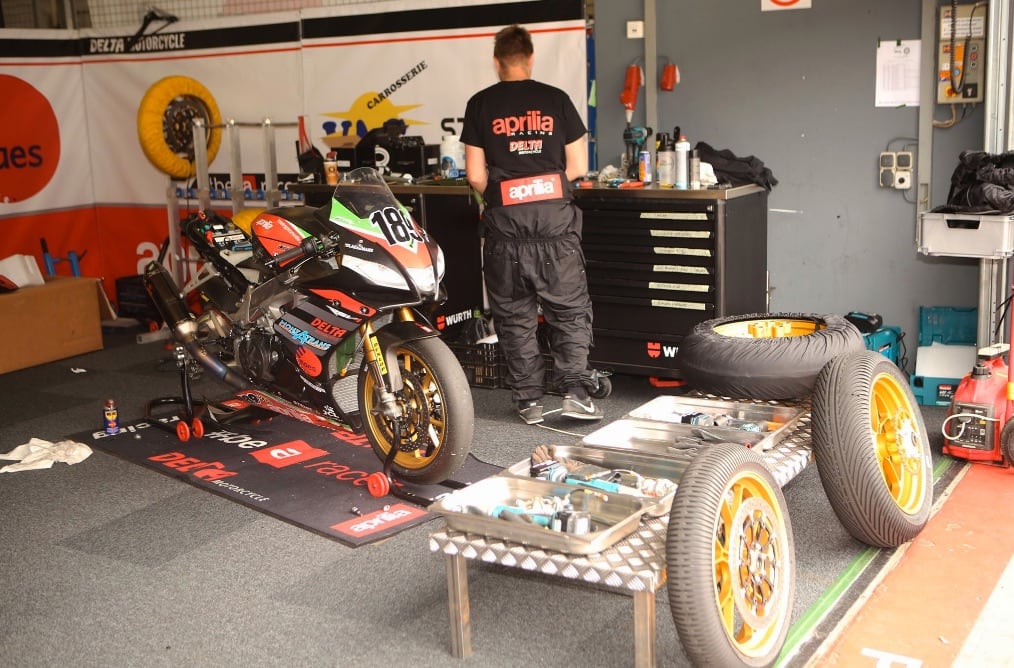 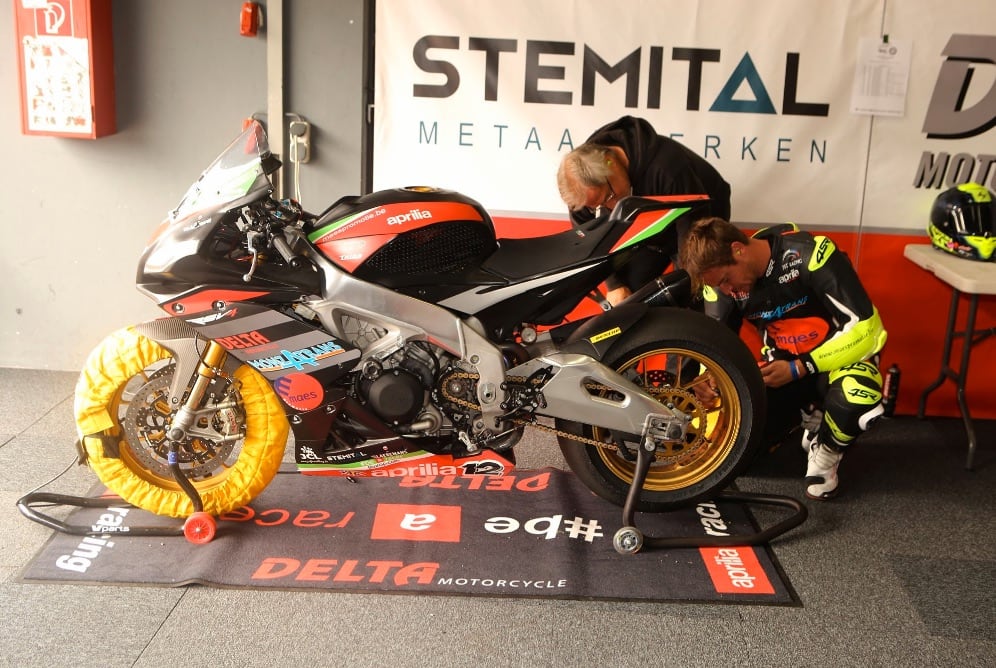