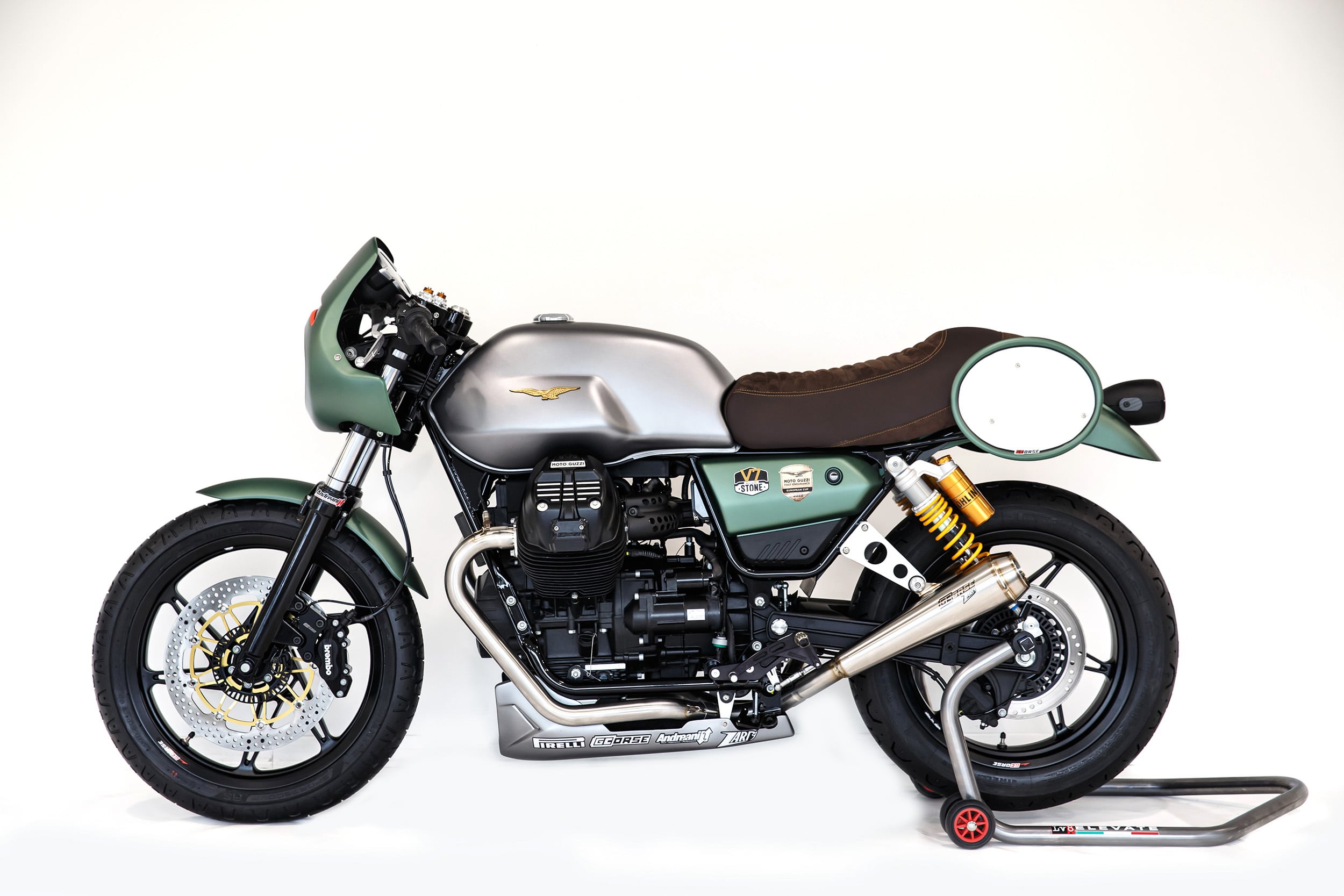 THE NEW V7 WITH 850 CC ENGINE OUTFITTED WITH GCORSE RACING KIT AND PIRELLI TYRES MAKES ITS TRACK DÉBUT: HIGHER PERFORMANCE AND MORE FUN BUT STILL EASY, ACCESSIBLE AND SUITED FOR ANY RIDER. THE TRIED AND TRUE V7 III BIKES ALSO ON THE GRID IN A SEPARATE, DEDICATED CATEGORY. THE BEST ITALIAN CIRCUITS JOIN THE CALENDER FOR SIX SPECTACULAR “FAST ENDURANCE” RACES: VALLELUNGA KICKS THINGS OFF ON 14 MAY, FINALE IN MISANO WITH NIGHT RACE AND A ROUND IN MUGELLO AS WELL. HERE THE 2022 CALENDAR OF THE FOURTH EDITION OF THE SINGLE-BRAND TROPHY.

Milan, 24 November 2021 After three extraordinarily successful seasons with no fewer than 30 teams on every starting grid in 2021, the Moto Guzzi Fast Endurance Trophy - dedicated to pairs of riders who want to venture into riding in spectacular “fast endurance” races inspired by the legendary races of yesteryear - is back in 2022 with a big addition. In fact, for the fourth edition of the Eagle single-brand championship, the new Moto Guzzi V7 “racing” version will make its début. 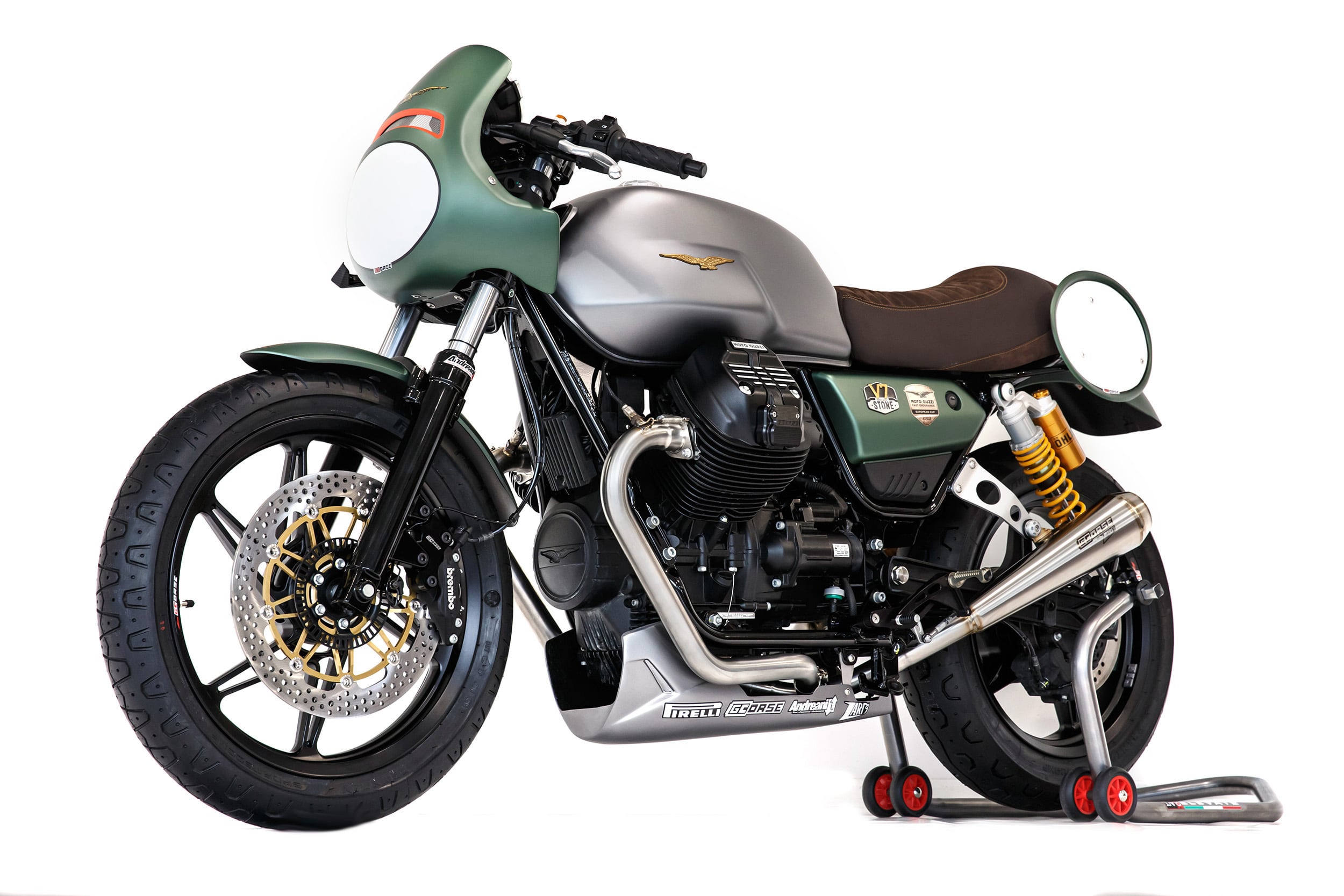 With a market launch in early 2021 and wildly popular with the general public straight away, so much that it was one of the most sold bikes in Italy, the latest generation of the best seller from Mandello - equipped with the new 850 cc twin-cylinder and revamped chassis architecture - will be the protagonist of the Cup, promising even higher performance and even more fun for all participants.
The equipment package that transforms the new Moto Guzzi V7 into the racing version, compulsory to participate and obviously the same for everyone in order to ensure an even playing field and maximum fun, is developed, as always, at the skilled hands of the Guareschi brothers, the historic Moto Guzzi tuners, who created the GCorse Racing Kit dedicated to the new V7, drawing from the valuable experience accumulated in the first three editions of the single-brand trophy.
The result is an even faster and higher performance bike with better frame and suspension qualities that make it more stable and precise. This increases performance and the thrills on the track, but the features which have made the Moto Guzzi Fast Endurance so successful remain unchanged, making it possible for anyone to get into racing: the new V7 “Trofeo” is still easy, accessible, and suited for any rider. 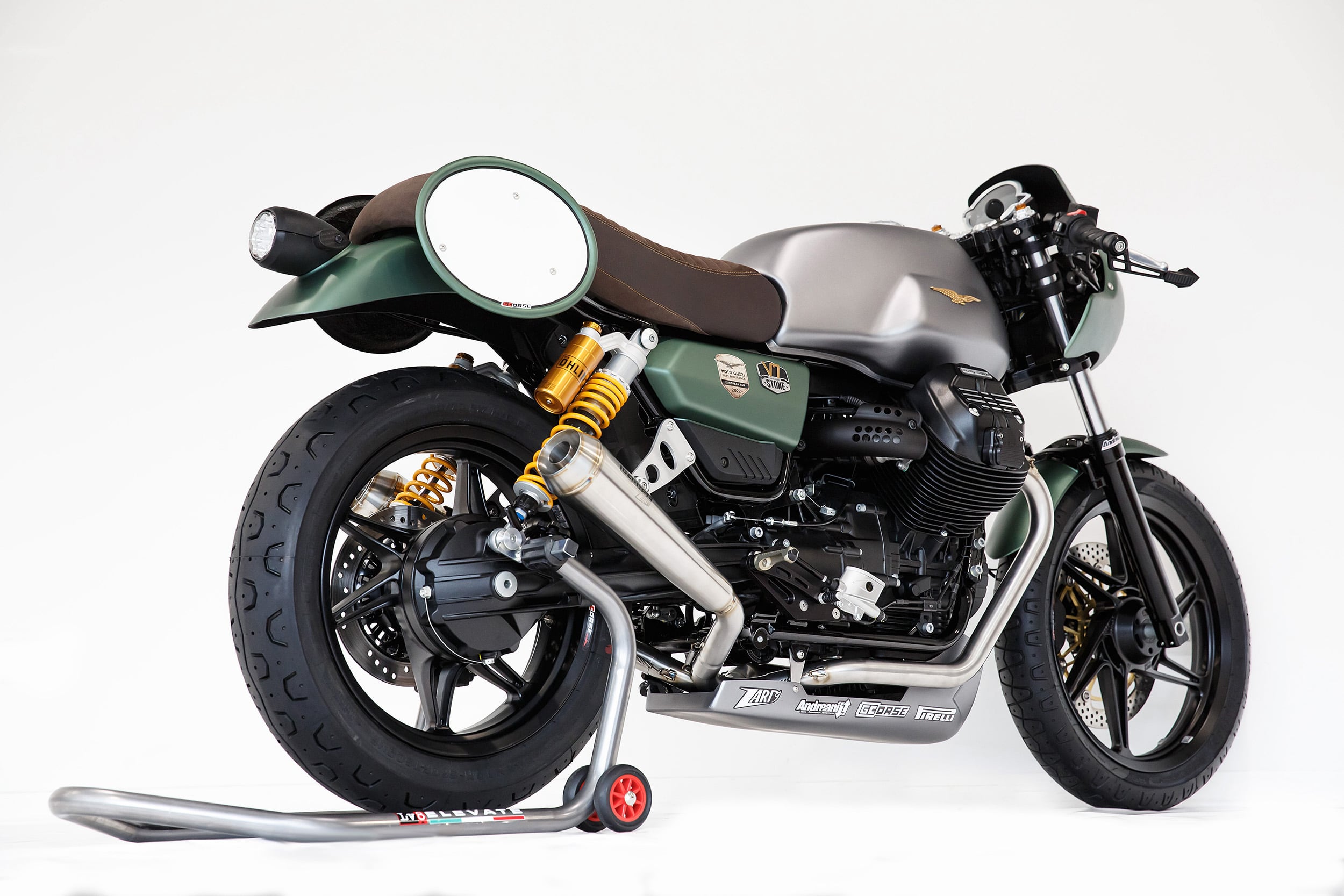 In the 2022 edition, riders will still be able to use the tried-and-true “racing” version of the Moto Guzzi V7 III, protagonist of the first three years of the single-brand championship and capable of astonishing with its agility, speed, and reliability. An even easier and more accessible alternative for anyone wanting to have fun on the track or for those who want to get one more year out of the investment made in the previous seasons.
The teams on the “seven-fifty” from Mandello with GCorse Racing Kits will race along with all the others, but a specific race and championship category will be dedicated to them.
Last, but not least, for 2022, the invaluable collaboration with Pirelli has been confirmed, sole supplier of the single-brand trophy. All the V7 machines on the grid will be shod with Pirelli Phantom Sportscomp RS, racing tyres developed specifically for the Moto Guzzi V7 and which have proven to perform extremely well in any condition.

Six races on the most spectacular tracks in Italy: Mugello joins the calendar, in Misano there will also be a night race. The new Moto Guzzi V7's track début is not the only significant change in the 2022 Moto Guzzi Fast Endurance. After a three-year period of constant growth which culminated with the recognition of the prestigious FIM European Cup title, assigned for the first time precisely in Moto Guzzi's centennial year, the Eagle single-brand championship is ready for another significant step up in quality, scheduling rounds on four of the most spectacular and fascinating tracks in Italy. These “new entries” are the Cremona Circuit and the fantastic hills of Mugello, the temple of speed for any motorcycling enthusiast. 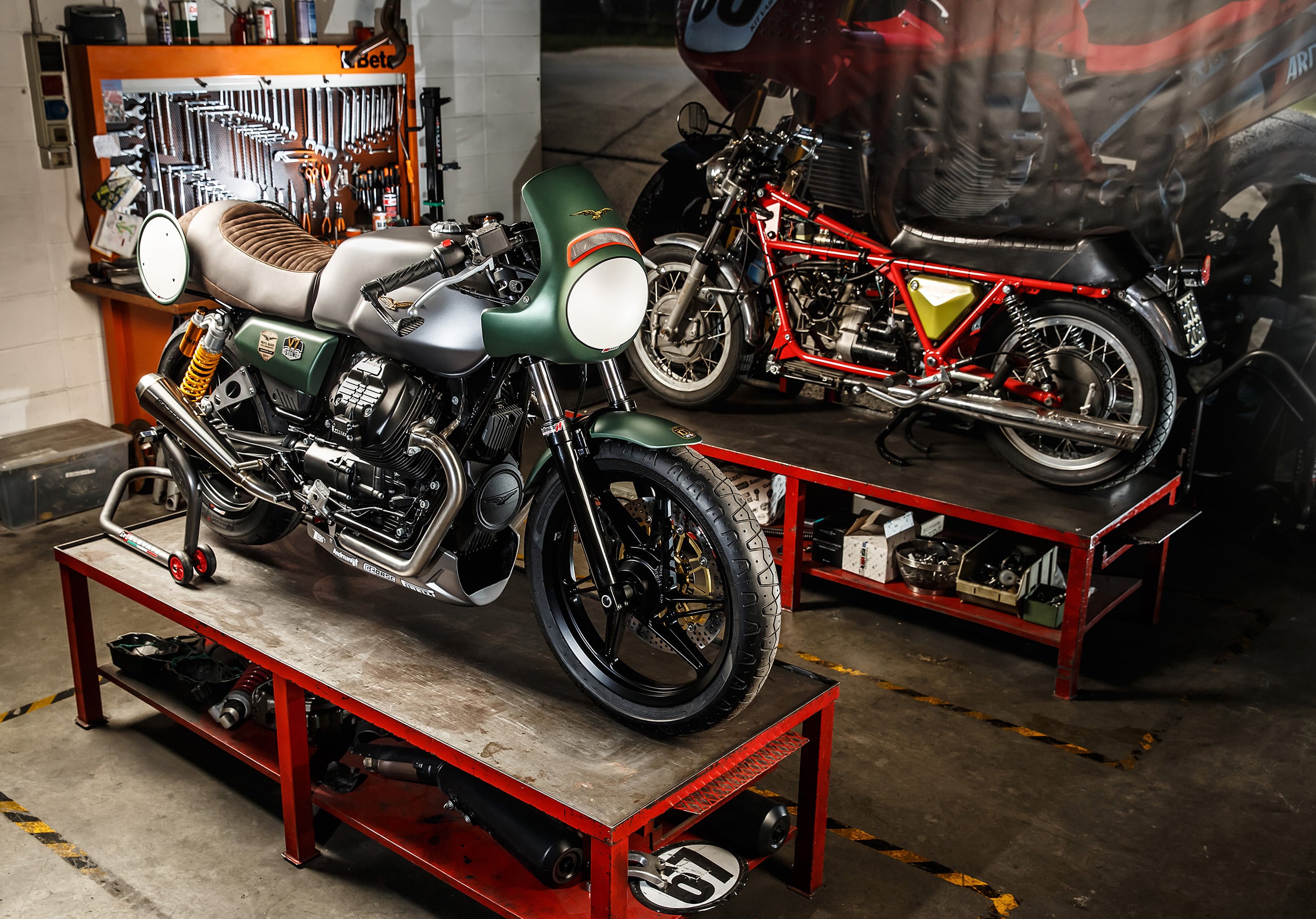 There will be six “mini endurance” races on the calendar, kicking off from Vallelunga on 14 and 15 May, where two 60-minute races will be held. They will be followed by the Cremona Circuit (17 July) and Mugello (28 August), with each venue hosting a 90-minute “mini endurance” race, ahead of the grand finale, schedule for Misano on 15 and 16 October. The first race on the shores of the Adriatic will start on Saturday evening and be held at night with the floodlights - and the V7 headlights, mounted only on this particular occasion - illuminating the track.
This is a new addition (which was actually already planned for 2020 but then cancelled due to the Covid-19 situation) that will make the 2022 edition of the Cup even more exclusive, giving all the participants the chance to experience another type of thrill that is usually reserved for only a few lucky riders: racing at night. In Misano, the night race will be 90 minutes, whereas the “mini endurance” race on Sunday will be 60 minutes. 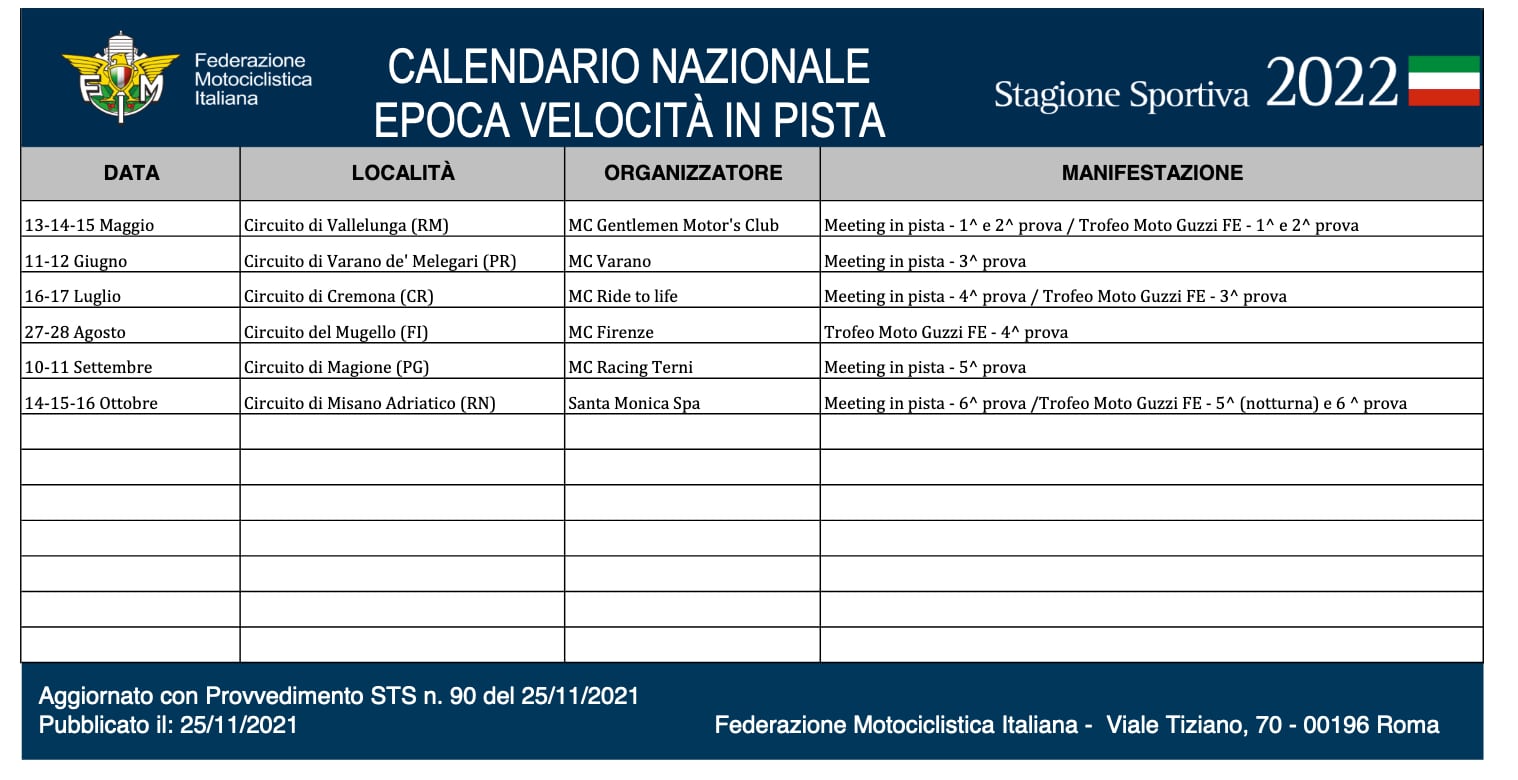 Friendship, passion, fun: racing according to Moto Guzzi. Participating in the Moto Guzzi Fast Endurance championship is the most fun way to discover your competitive side and to get a taste of the great sense of belonging generated by the Moto Guzzi brand. In total “Guzzista” style, the format of the race weekends anticipates the insertion of sporting competition within an extremely social atmosphere. They will be weekends to experience cultivating the feelings of friendship and sharing which have always characterised the healthiest of sports and which represent its most profound meaning. The race format and the choice of the Moto Guzzi V7 make the Moto Guzzi Fast Endurance championship perfect for everyone to have fun, from track novices all the way to the most seasoned racers.

Every race weekend includes two timed practice sessions, 20 minutes long each for every rider. The average of the best times achieved by the two riders on the team will determine the starting position of each team on the grid for the race or for both in the case of weekends with double races.
A clear throwback to the legendary endurance races of old is represented by the race start, which takes place in “Le Mans” style, in other words, with the bikes lined up on one side of the track and the riders having to cross the asphalt at the start to jump in the saddle and begin the race.
In the race, each rider can ride for no more than 15 minutes (plus 5 minutes to return to pit lane from the time the special “change” board is displayed). This means that the race is livened up by at least three or five rider changes on pit lane, depending on whether it is a 60 or 90 minute race. Refuelling is not permitted. At the end of the race, points are awarded to the top 15 teams.

To stay up to date with all the 2022 Moto Guzzi Fast Endurance European Cup news and registration methods, simply visit the web pages at www.motoguzzi.com and the Federazione Motociclistica Italiana (Italian Motorcycle Federation) website, www.federmoto.it.