ON THE ROAD EVENT

A GREAT SUCCESS FOR THE RE-ENACTMENT OF THE VESPA “PEACE RELAY”! 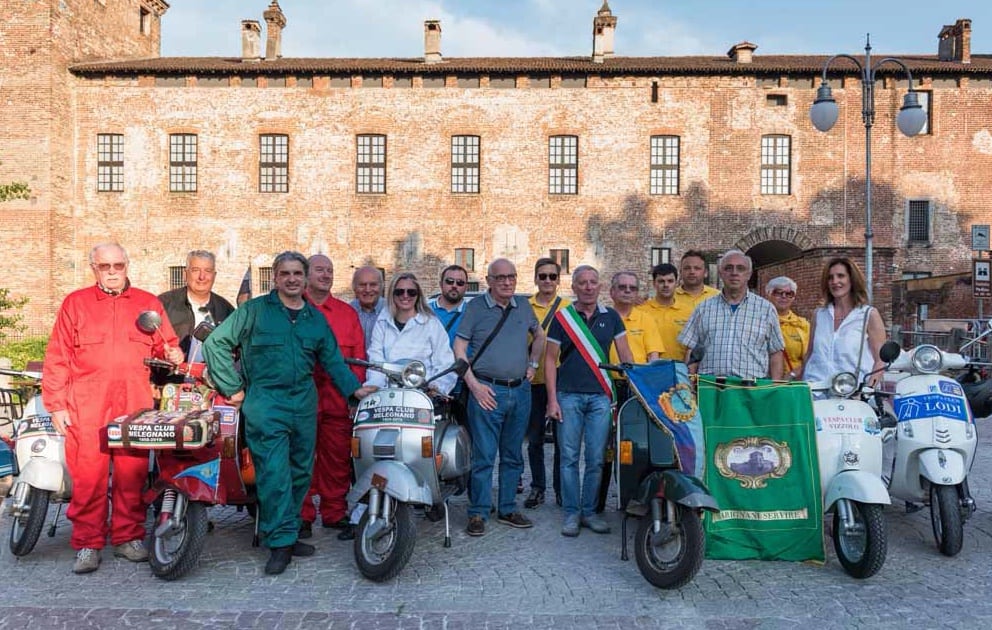 CHRONICLE AND PICTURES ON A SPECIAL TRIP, 60 YEARS AFTER THE ORIGINAL RELAY. REPORT BY LUCIANO PASSONI, PHOTOS BY SALVATORE MANISCALCO AND MARCO CREMASCOLI.

5-9 June 2019 – “Berne-Chambéry-Melegnano, just under 1,200 kilometres, a road map organised in three stretches; the mission to re-enact the 60th anniversary of the Vespa relay undertaken in 1959. The trip was packed with meetings and events, and initially beset by bad weather, although this failed to dampen the spirits of the participants, who were well aware of the expectations of the many people who came to cheer them on when they left.

On the evening of Wednesday 5 June, the mayor of Melegnano, Rodolfo Bertoli, acted as the official starter with the handover, under a fluttering Italian flag, of the banner to be delivered to the Swiss and French authorities, together with a message of renewed brotherhood. A large crowd of family and friends, acquaintances and curious passers-by, together with members of the press, gathered, as the sun set, in front of the castle, a majestic and solemn backdrop for the small group of riders with a big heart.

The Relay riders: Angelo Lavesi and Elena Lavesi; below: Massimo Arese (left) and Mauro Tresoldi. They were accompanied by a support van driven by Riccardo Passoni.

A short rest before the meeting in the early hours of Thursday 6 June, as dawn was breaking, at the town ossuary, the monument where the remains of soldiers of all nationalities are buried, which stands for the spirit of re-conquered freedom. A ride across the Milan hinterland to the national border. Switzerland gives us a cold welcome, in meteorological terms, before unleashing steady rain, which simply increased the determination of the indomitable Vespa riders to win the challenge. A quick meeting with the Ticino Vespa Club, and then off along the orderly Swiss roads. 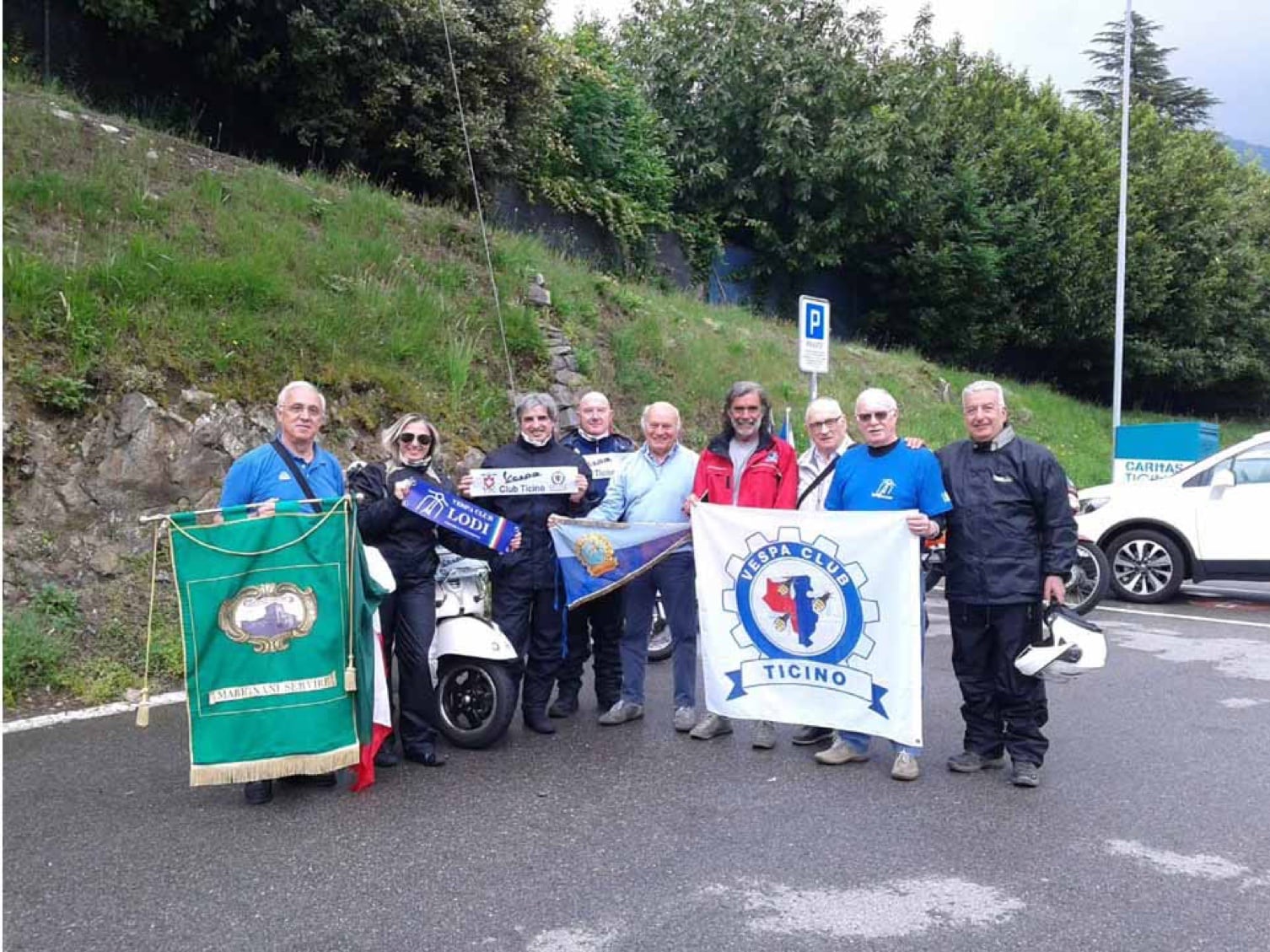 The closure of the Alpine passes forces a change of itinerary, but the sun comes out to brighten the route along the lakes of Brienz and Thun, once we come through the St Gotthard tunnel. Berne is not far off, but we can’t resist the invitation of a friend of our town’s motoring history, Claudio Mattioli, who owns a museum devoted entirely to the Fiat 500.

Cold cuts and mountain pasture cheeses consolidate the friendship and ensure we don’t regret the time spent at a laden table. The Berne Vespa Club is waiting for us at the city gates: a welcome, photos and finally a chance to meet face to face after months of phone calls and emails to organise the event. The busy city traffic is no problem for people accustomed to riding in the Milan area, and we soon reach the city centre, where we are greeted by an official from Berne city hall, Jurg Wichtermann, and taken inside, with our Vespa scooters making a triumphal entrance into the main courtyard, for photos and exchanges of gifts, terminating in a convivial meal in a local restaurant.

We make a brief tour of the city as we leave, after saying goodbye to acquaintances who had now become friends, with a promise and the hope of returning. A ride through Geneva is a must; the ritual photo in front of the Palais des Nations, under the vigilant eye of the security officers, is a homage to the spirit Peace that accompanies our small mission. The flags on the building flutter in the wind from the lake and salute our passing. We ride into France and reach Chambéry, where the members of the local Vespa Club based in the city Vespa dealership are waiting for us.

A real party, a most enjoyable happy hour. The city authorities are represented by the councillor for international relations and cooperation, Nathalie Colin-Cocchi. We exchange gifts and greetings, a powerful moment, and spend the evening visiting the city, under the austere gaze of the Savoy mountains.

The last stretch is the return home, with the ascent up to the Mont Cenis Pass and the descent down into Italy enlivening the combative sporting spirit of our Vespa riders and photographer. 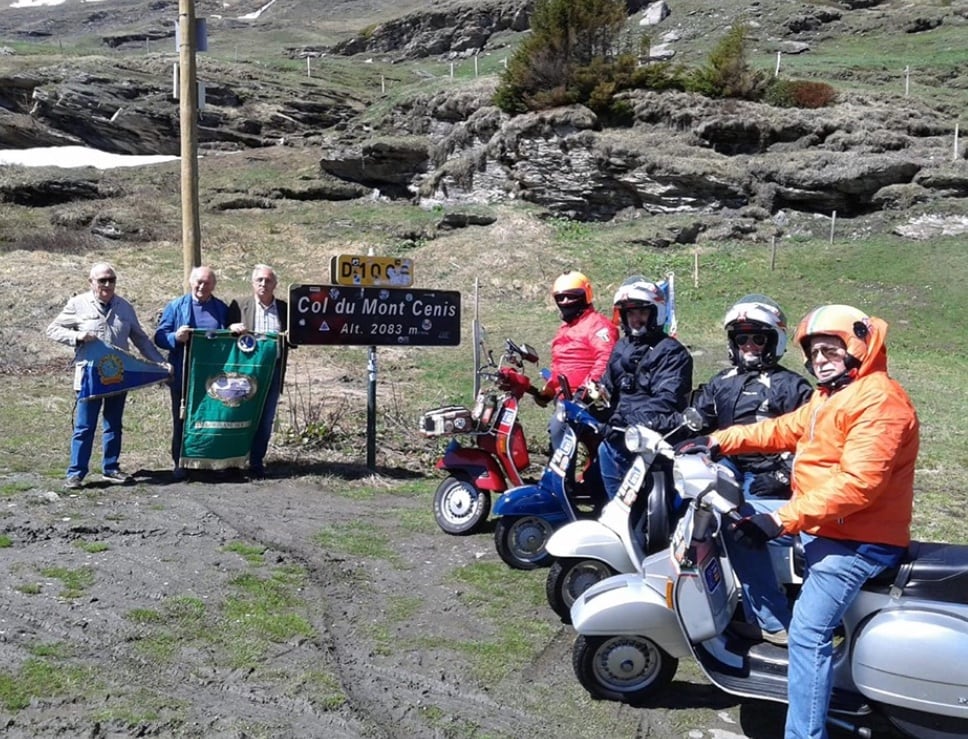 As refreshed as if we had come back after a day out, we ride through the Susa Valley, cross Turin, the Monferrato area, Pavia and, just late enough to raise the sense of anticipation, we reach the ossuary.

And then the final parade, led by deputy mayor and Vespa rider Ambrogio Corti, with the Vespa Clubs of Vizzolo and Lodi riding alongside, the standard of Marignani Servire which provided such invaluable assistance, the services of Massimiliano Gola and, one by one, we ride across the finishing line: Giuseppe Cremonesi, Vincenzo Ballerini, with Salvatore Maniscalco who took the photos, the writer with his son Riccardo who acted as front-riders, protecting and taking care of the proud Vespa riders Angelo and Elena Lavesi, Massimo Arese and Mauro Tresoldi, the real protagonists to whom we pay homage. Honour is also due to the two Vespa riders from 1959, the unforgettable Giuseppe Raineri and Pierino Cremascoli, who travelled with us and shared our joy with a small laurel wreath, a short ceremony and deep emotion”. 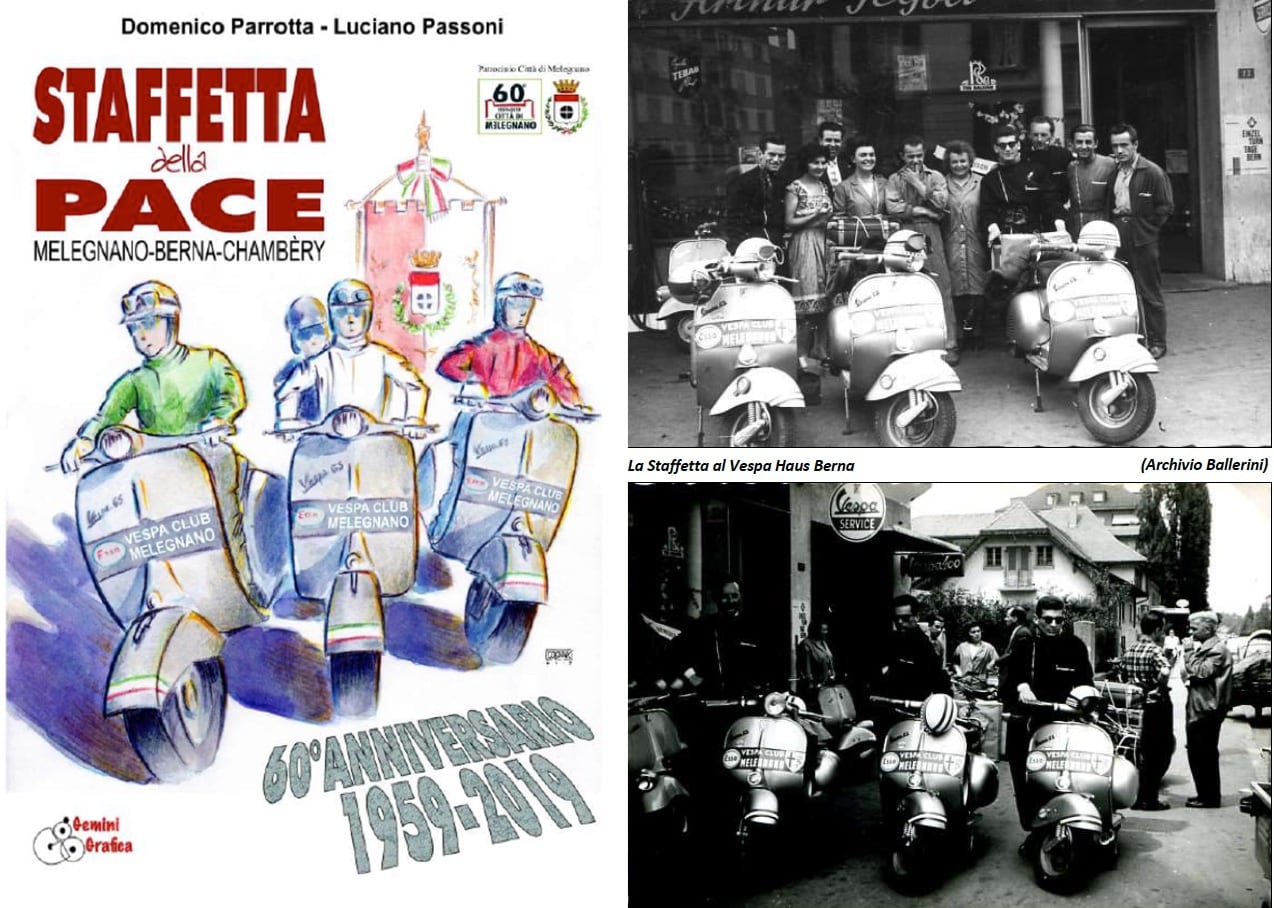 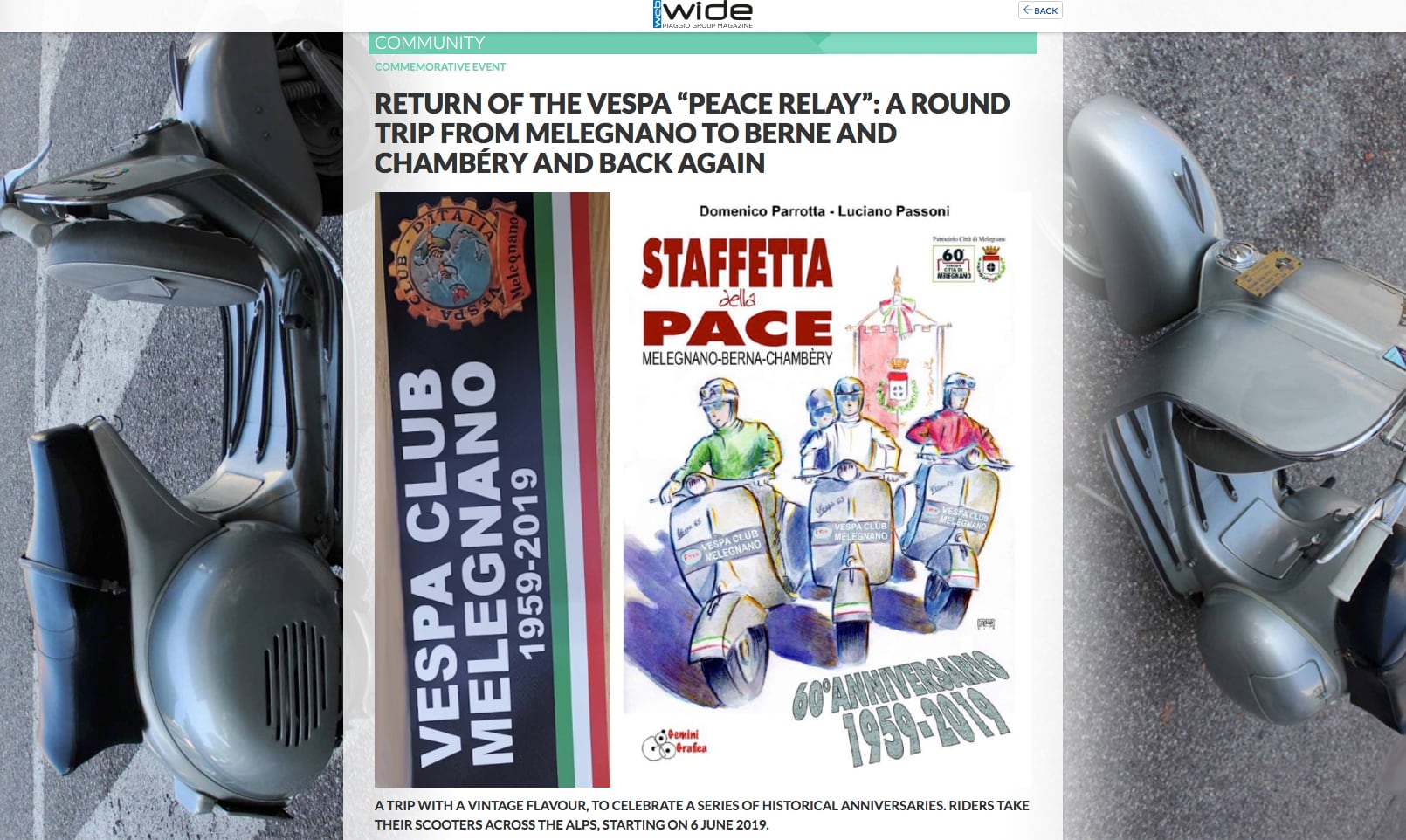