HONEYMOON ON THE ROAD

DANIELE AND CRISTINA: A COUPLE RIDE A MOTO GUZZI
TO NORDKAPP, DREAMING OF CALIFORNIA TOURING 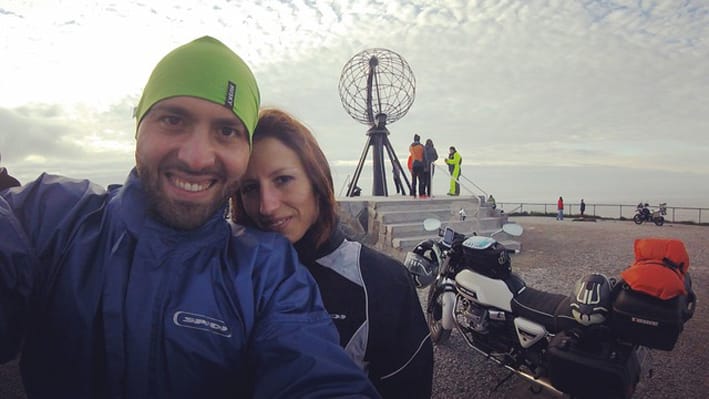 The email received by the Wide editorial staff said: “For our honeymoon in July/August 2017, my wife and I rode 9,000 km from Tuscania to Nordkapp and back, on a Moto Guzzi V7 750, crossing Austria, Germany, Denmark, Sweden, Finland, entering the Arctic Circle and riding up through Lapland and then coming back down via the Norwegian fiords. We wrote a 34-day travel diary (with photos and GoPro video), posted on the La Fune.eu online journal edited by my brother-in-law Roberto Pomi. This is the link (in Italian): www.lafune.eu/i-diari-della-motocicletta-nordkapp-guardando-in-faccia-il-polo-nord”. 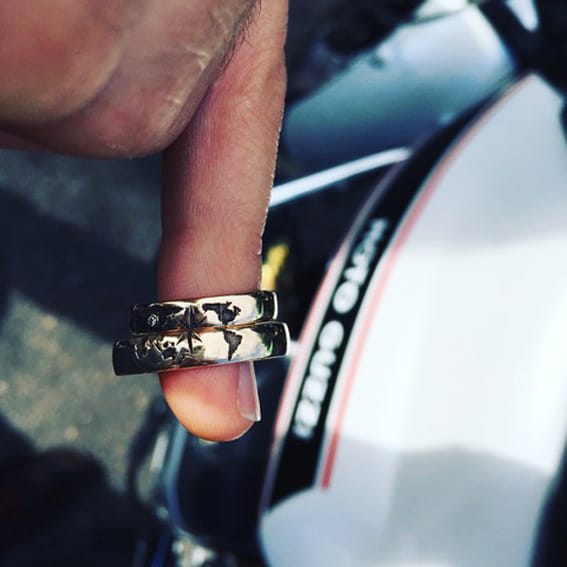 The unusual wedding rings chosen by Daniele and Cristina, and the “logo” of their wedding trip through Northern Europe: they married on 22 July. “Just Married” is the wording on the windshield of their MG V7 bike, known as the “Poderosa” (“Powerful bike”). 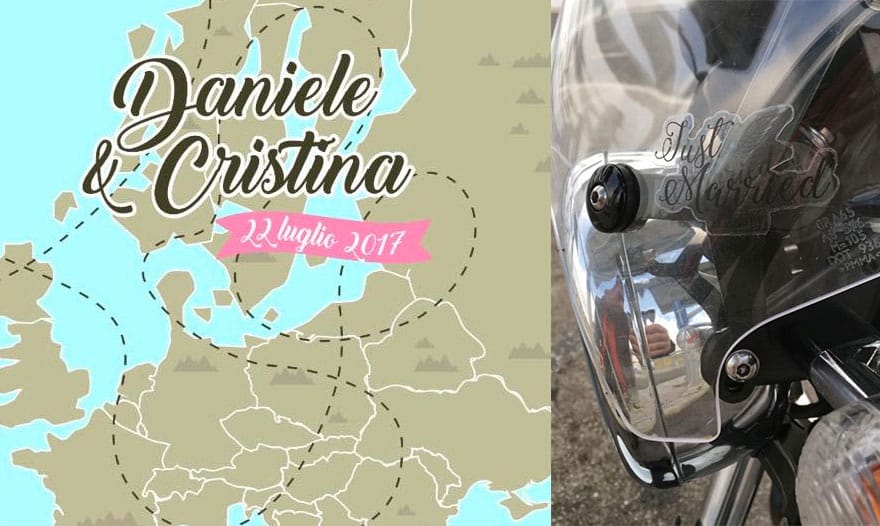 The email came from Daniele Zinghinì (a psychologist and clinical neuropsychologist specialising in cognitive psychotherapy), a passionate fan of motorbikes and travel. We interviewed him.
CONGRATULATIONS ON THIS WONDERFUL ADVENTURE: WHERE DID YOU START FROM?
“From Tuscania, in the Lazio region, in the centre of Italy, where I live with my wife Cristina Pomi, although I was born in Iodi Tuscania (Viterbo) and Cristina in Viterbo. We’re both 32.”
TELL US ABOUT YOUR MOTO GUZZI TWO-WHEELER…
“It’s a Guzzi 750cc from 2009, which I bought second-hand four years ago with just 1,000 km on the clock.”
AND WHAT SORT OF TRAVELLING COMPANION DID THE BIKE PROVE TO BE?
“We had a wonderful trip: the bike made for a very pleasurable ride; even Cristina on pillion never complained! Of course, I would have been more comfortable if I’d had protection for my hands and knees in the rain and wind… But I had a good pair of gloves and the right clothing for riding a naked bike. On the Danish, German and Swedish motorways my Guzzi performed just as well as other famous tourer brands. If not better. Even on the endless Norwegian bends around the fiords, it was an extremely gratifying ride. The bike handled well on dirt roads too, going well even on the bumpier roads. Everyone complimented us on the Guzzi, notably the BMW riders with their GS bikes (they looked at us as if we were ‘heroes’), as well as other bikers with large two-wheelers, and this encouraged us to carry on and made us feel ‘special’ because we were undertaking such as important trip with such a small bike … The only flaw was the sound of the engine: it’s music to my ears but… the reindeer ran away before we could get anywhere close!”

DO YOU ALREADY HAVE PLANS FOR YOUR NEXT BIKE TRIP?
“The possibilities include Samarkand or a trip round Portugal, it depends how much we manage to save by June 2018.”
WHICH MOTO GUZZI BIKE FROM THE CURRENT RANGE WOULD YOU LIKE TO TAKE?
“I’m particularly fond of the ‘small’ range, so I would say the V7 III Special; but the optimum would be a Moto Guzzi California Touring 1400.” 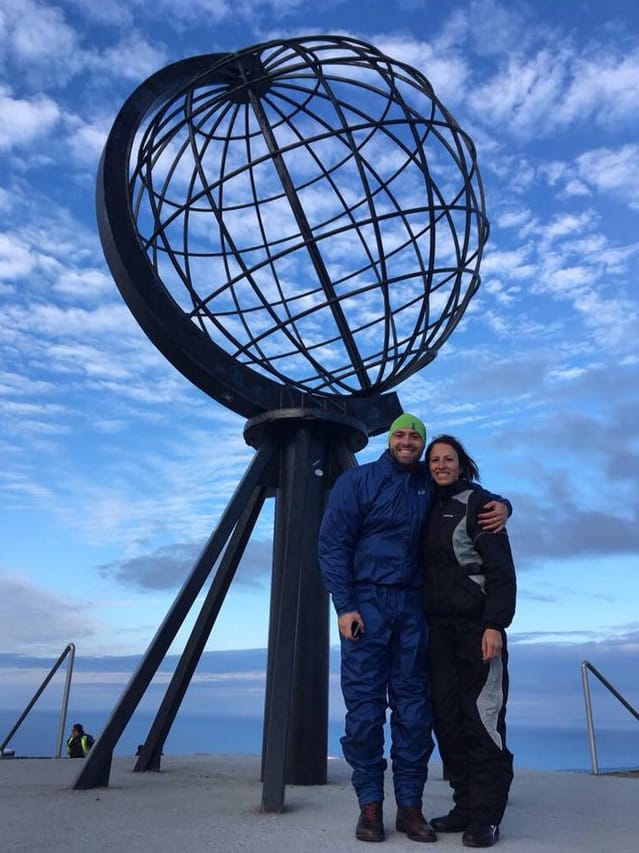 ARRIVAL AT NORDKAPP (translation from the article edited by Roberto Pomi, 4 August 2017). The motorbike diaries – Nordkapp, looking towards the North Pole.
“Today is the big day, when we’ll achieve the dream of every biker: reaching Nordkapp, the northernmost point of continental Europe.
Reading a blog, we discover that only 9% of bikers successfully complete the arduous journey; this alarmed us somewhat, but we’re sure we can do it and we trust our Poderosa. Time for the off. It’s 8:30, whereas the Finns (like the Swedes) never seem to wake up, we’ve got an early start, with 450 km ahead of us. It’s raining outside. 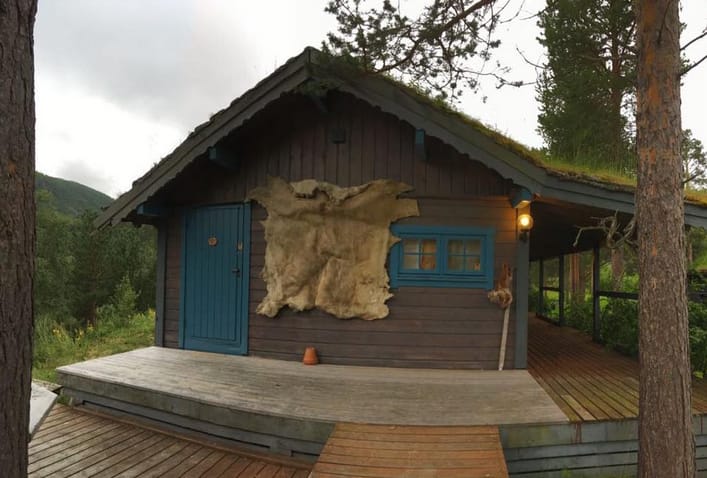 It’s cold, 15 degrees, with an icy wind so it feels like just 5 degrees. We have to leave our cabin with built-in sauna (they had to invent something to help them live with this arctic air!) and set off for Nordkapp. The arctic landscape is surreal and silent whatever time of day you ride through it, and the reindeer are in charge of everything, including the roads. 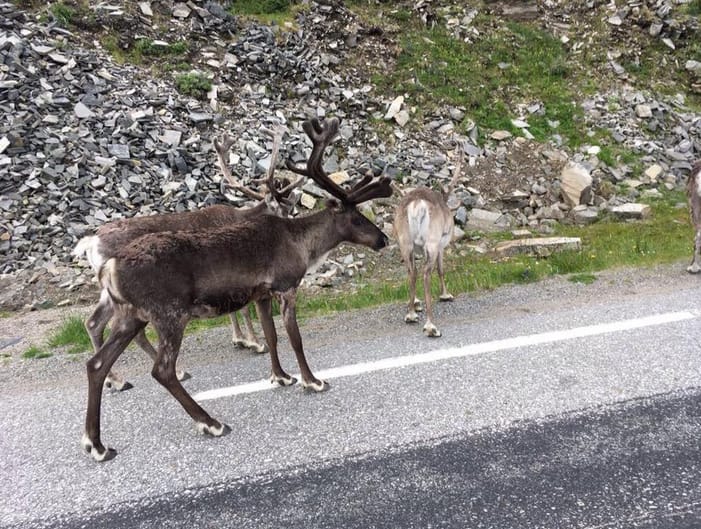 In the last 50 km in Finland, the landscape changes: we’re in the middle of nowhere in the Lappish forest for a 90-km stretch. The tarmac road changes to a dirt track (yes, the Poderosa passed the offroad test with flying colours). A lot of work is underway to widen the road; you have to weave your way round cranes and futuristic vehicles as well as cars coming from the opposite direction. The road is a continuous up and down; it’s like a long carpet blown by the wind. The ride into Norway is almost anonymous. There are more signs as you leave Finland than those welcoming you to Norway. A simple Norge officially declares our new conquest. 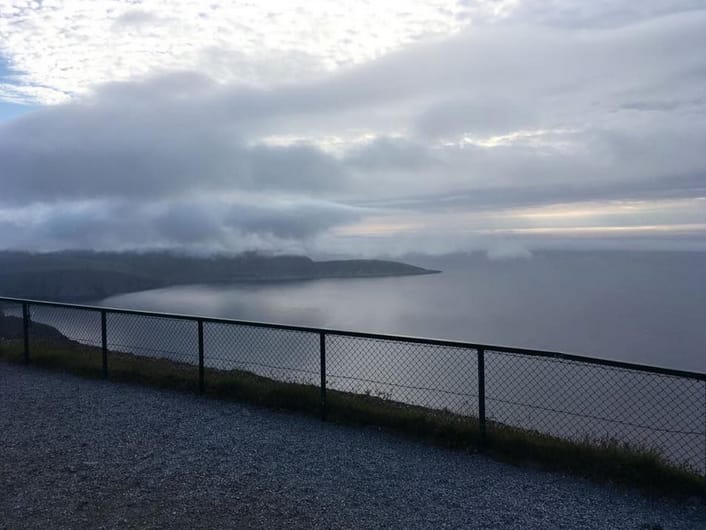 The big challenge approaches: travelling the Arctic Road to Nordkapp without becoming fog-bound. We arrive on the island of Magerøya via the world’s longest and deepest tunnel, 8 km in length and 212 metres below the Arctic Sea. We come out of the tunnel to a temperature of 10 degrees, and we’re in luck. Unlike many disappointed riders returning from their trip, we are met with a beautiful sunny sky enabling us to see the majestic scenery. Perhaps God or whoever it was began painting the world from here, then gradually began shrinking the landscapes until they reached our small Italian hills. 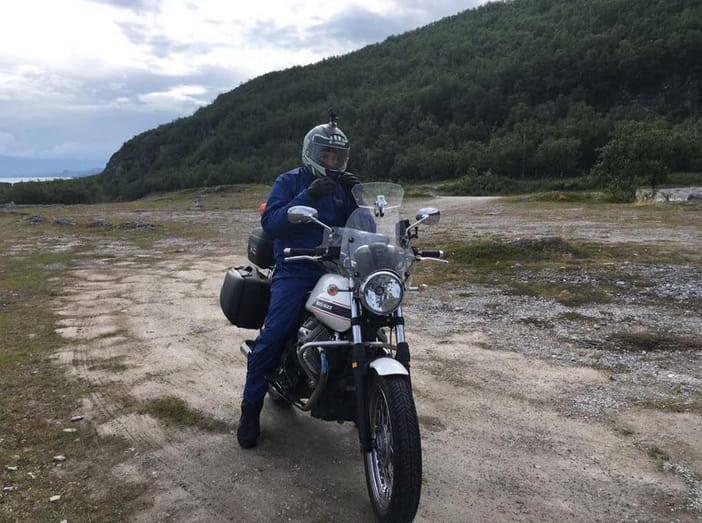 The reindeer are our constant companions, sociable creatures that wander serenely along the road without appearing to worry about the cars. A sign tells us we have only 5 km to go, and we get goosebumps, not just because of the cold, the adrenalin begins racing and we want to shout for joy inside our helmets, but we hold back, to avoid tempting fate, until we reach our destination. A blue sign saying “Nordkapp” welcomes us ahead is the horizon, a blue sky and the arctic sea below a drop of 307 metres. We’ve done it. The unusual thing is that we are able to see the horizon and the surrounding landscape on our arrival for about 20 minutes without the ever-present fog. A truly lucky day! After 4,000 km we’ve reached the northern latitude of 71° 10′ 21″: the North Cape!” 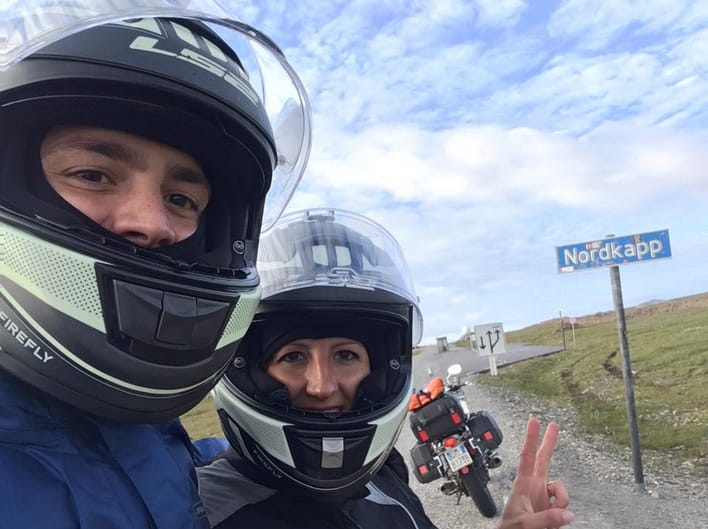 THE COMPLETE REPORT IS ON THE ONLINE ITALIAN JOURNAL LA FUNE – IN THE SECTION “DIARI DELLA MOTOCICLETTA” (“THE MOTORBIKE DIARIES”).
www.lafune.eu/diari-della-motocicletta