DISCOVERING PARIS: THE VILLE LUMIÈRE FROM THE SADDLE OF A MOTO GUZZI V7 III CARBON 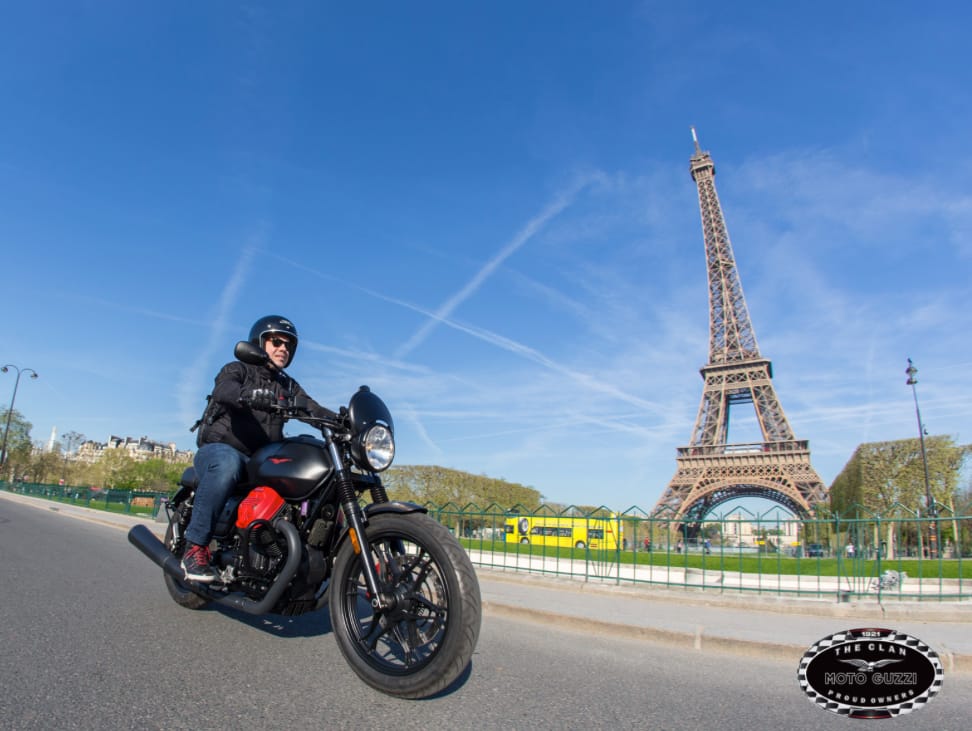 IN THE COMPANY OF LUCA PITTALIS, SARDINIAN BY BIRTH, PARISIAN BY ADOPTION, A TRUE-BLUE GUZZI BIKER FROM THE CLAN COMMUNITY.

January 2019 - Luca Pittalis loves his Moto Guzzi V7 III Carbon, from the V7 III limited numbered edition, and Paris, where he has lived for 15 years and enjoys exploring on his personalised Moto Guzzi bike. Here is his biker itinerary to discover the ville lumière, a five-stage trip around the French capital’s most fascinating places and Luca’s personal favourites. 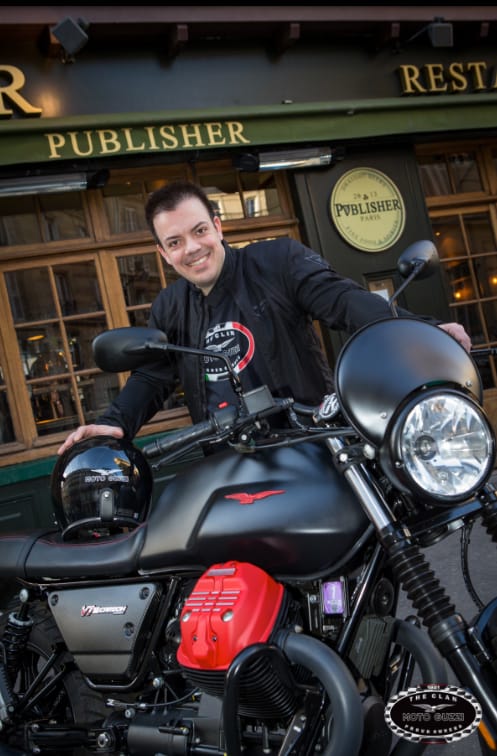 1) The Eiffel Tower. It may be an obvious starting point, but alongside this symbol of the city looking over the Champ-de-Mars is a perfect spot to park your bike, with the Tower in the background. At all hours of the day, there’s always a biker taking a photo of their two-wheeler, perhaps before going to have a picnic in the park. This is a magnificent spot, especially in the spring, Luca tells us: “It’s the first place I visited when I came to Paris 15 years ago. It was late when I landed in Paris, 10.30 in the evening, but I wanted to see it so at midnight there I was under the Eiffel Tower. Although it’s so famous and packed with tourists, it has a special meaning for me.” 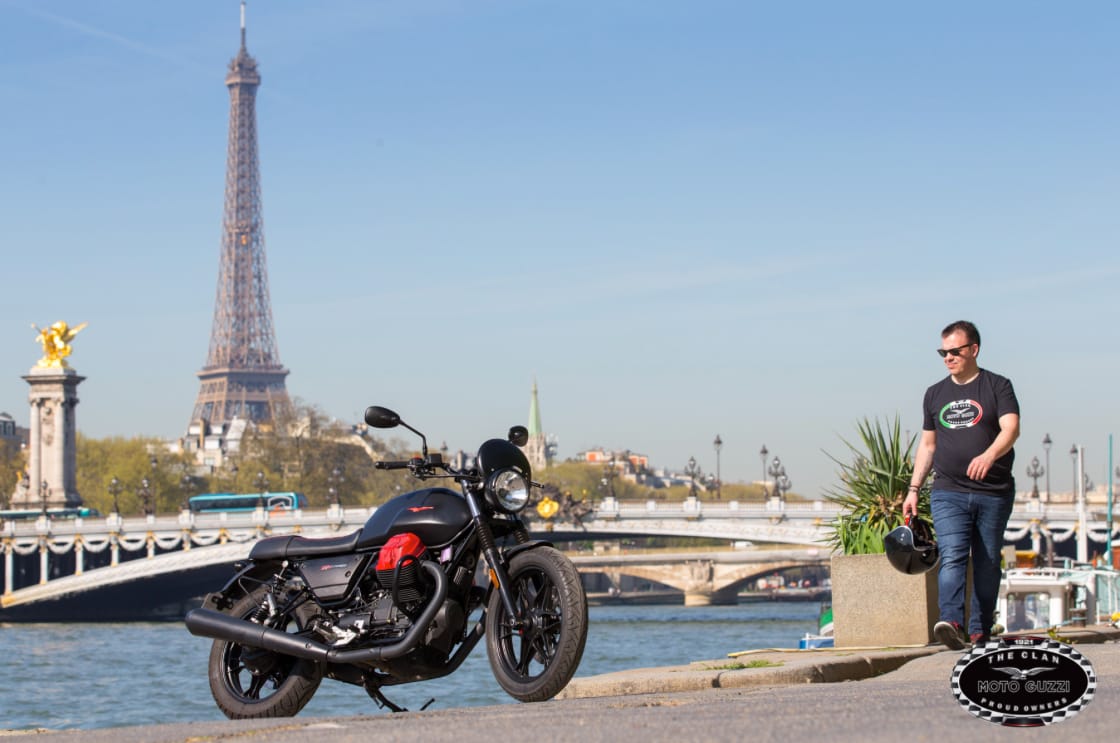 2) Canal Saint-Martin. Canal Saint-Martin is one of the best places to décompresser– as Parisians say – to relax by riding slowly through the narrow streets, then parking and continuing on foot along the canal. You can have something to eat on one of the many péniches – moored barges – offering typical French cuisine: spiced meat pâté, French cheeses and charcuterie, aperitifs and the characteristic “terrine de campagne”. 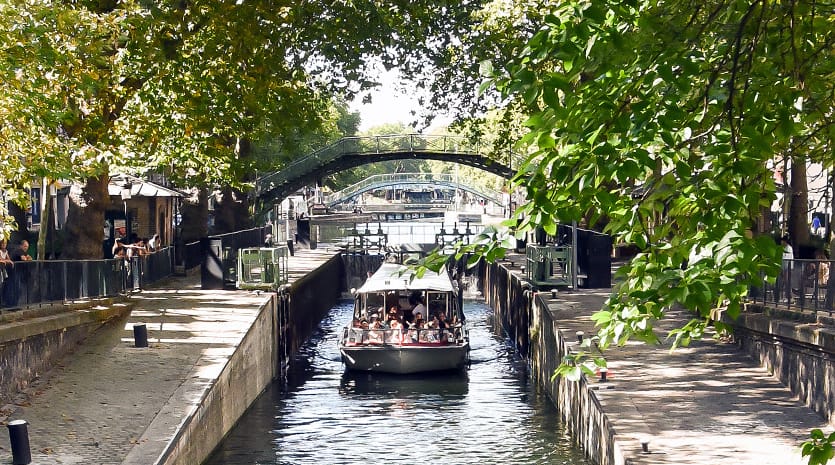 Sunday is Luca’s favourite day to come here: “I enjoy street photography in this district, which is frequented by city residents but not much by tourists; there aren’t any big attractions, just a lot of small cafés and footbridges.” 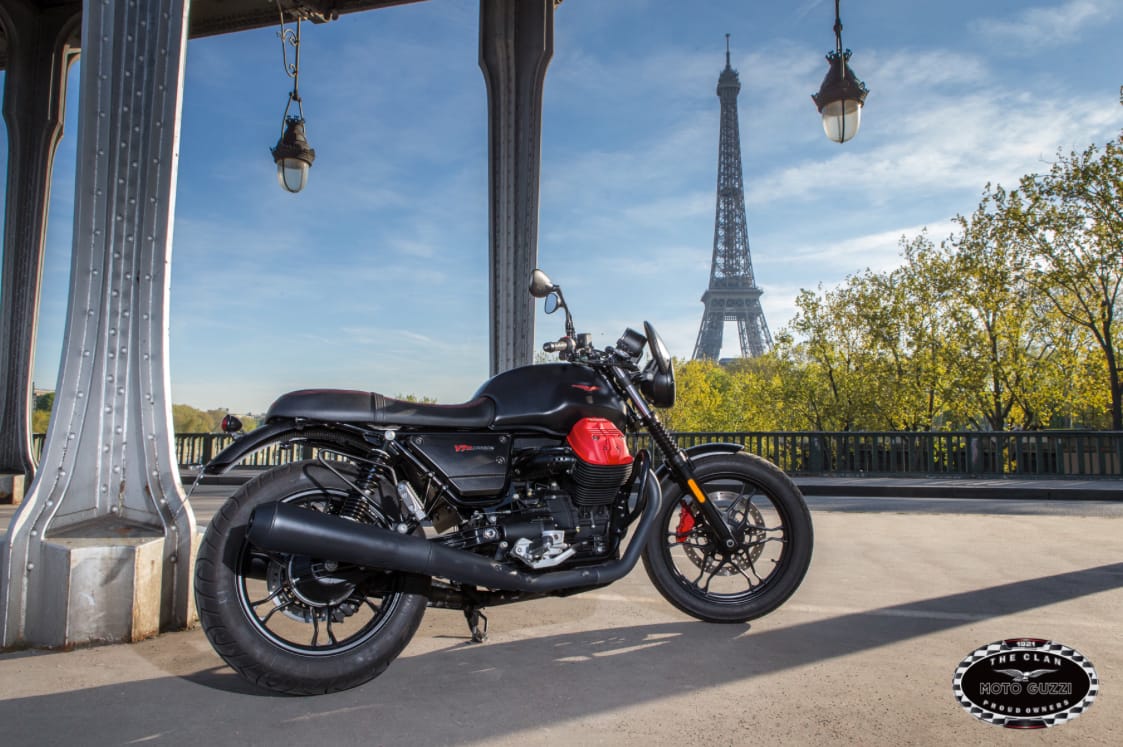 3) Le Marais. Since the 1980s, Le Marais has been Paris’ trendy district: you park your bike near the Hôtel de Ville (city hall) and continue on foot. In a few minutes you come to my favourite ice cream parlour: Pozzetto, at 39 Rue du Roi de Sicile, not far from Notre-Dame. I come here because the excellent ice cream reminds me of Italy. A special date in this area is the Music Festival (21 June), a very popular event across France and especially here in the Marais, where they always organise lots of parties and entertainment.” 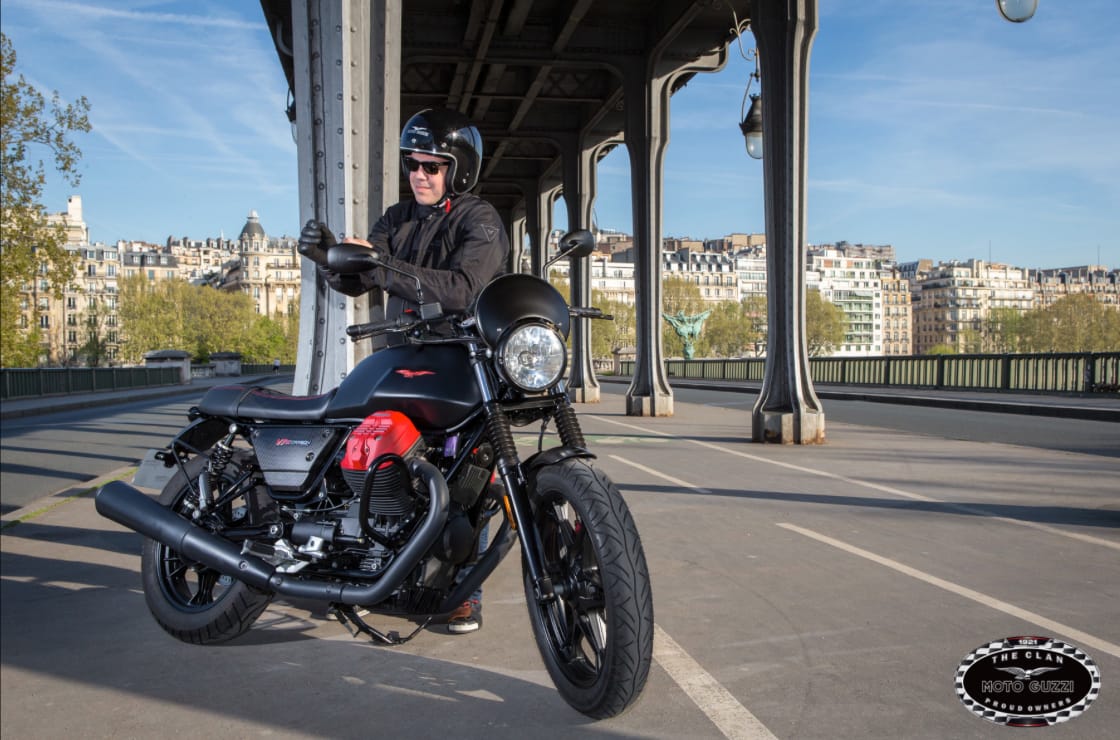 4) Publisher Pub, 33 Rue Constantinople. “A pub, yes, but not any pub: my pub! A Guzzi biker pub!” The owner of this welcoming Irish-style pub since September 2017, where he offers homemade food using prime ingredients, Luca has transformed his locale into a real “Guzzi Eagle nest”: today, the Publisher Pub is a fixed meeting place for owners of Moto Guzzi bikes, beginning with the V7 which – Luca assures us – “is conquering Paris!” Luca points out that the invitation to come and visit the pub is open to all members of The Clan: it’s easy to find, Luca’s V7 III Carbon is always parked outside!
5) The Palace of Versailles. It’s true that we’re outside Paris, but precisely for that reason a trip away from the city is always an excellent idea.

“I like going there on Saturday morning, before starting work at the pub. You travel west along secondary roads away from the traffic, and it’s a great ride of about 45 minutes towards Versailles. Once I get there, I often take a few photos in front of the Palace’s gold gates, before leaving my bike at the entrance to the gardens, where I can stroll for hours and even lose myself.” 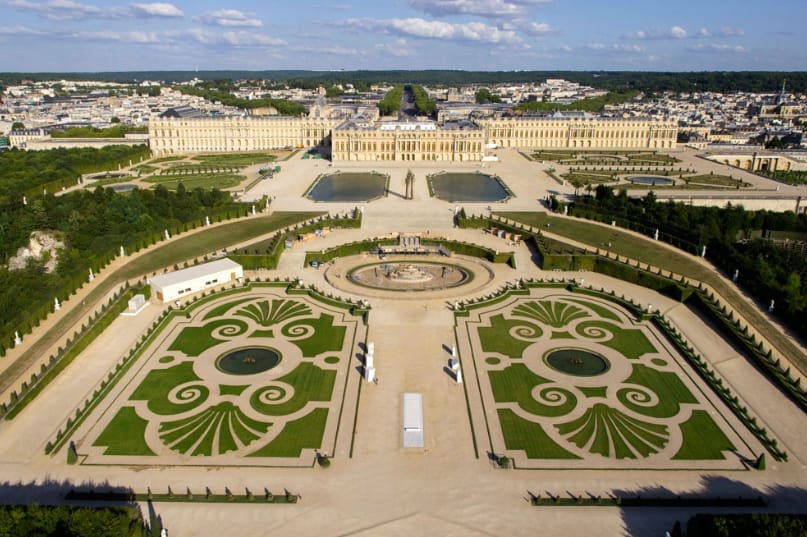 Luca Pittalis, Sardinian by birth, Parisian by adoption, is a true Moto Guzzi enthusiast and an active member of The Clan. His Guzzi passion began in 2012 when he bought a V7 Stone, which he then personalised in an “urban total black” look. 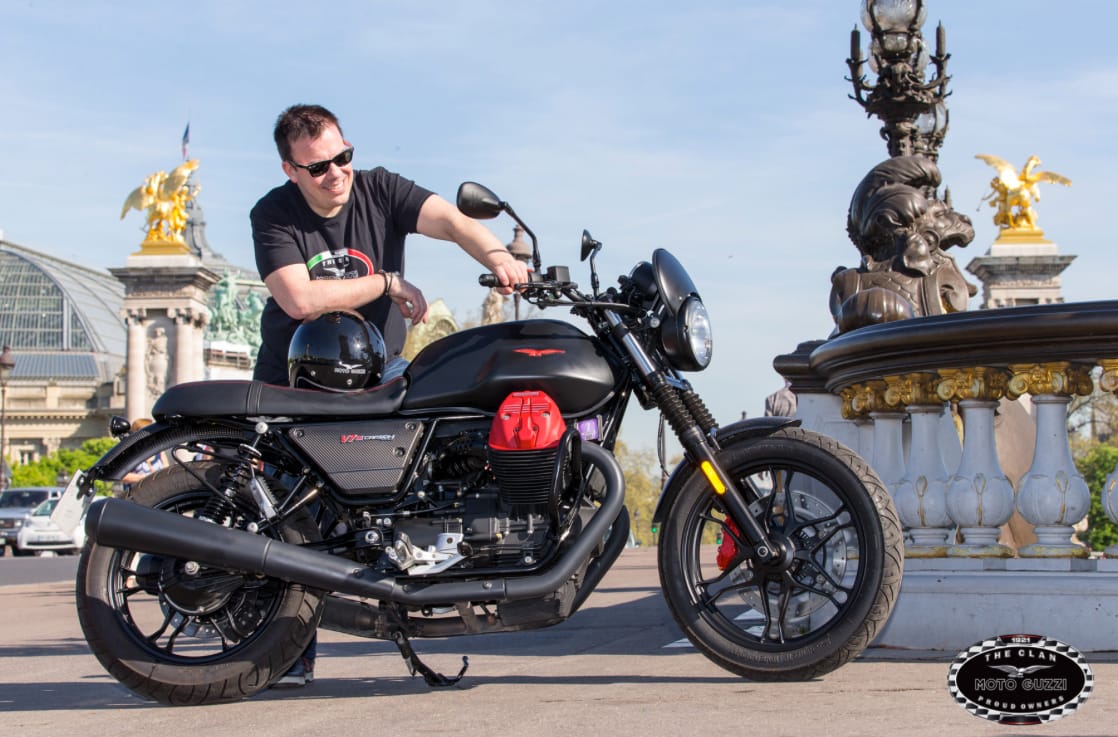 But when the first photos of the presentation of the V7 III Carbon at EICMA 2017 came out, Luca didn’t think twice: he raced to the dealer to become one of the very first owners of the new bike. 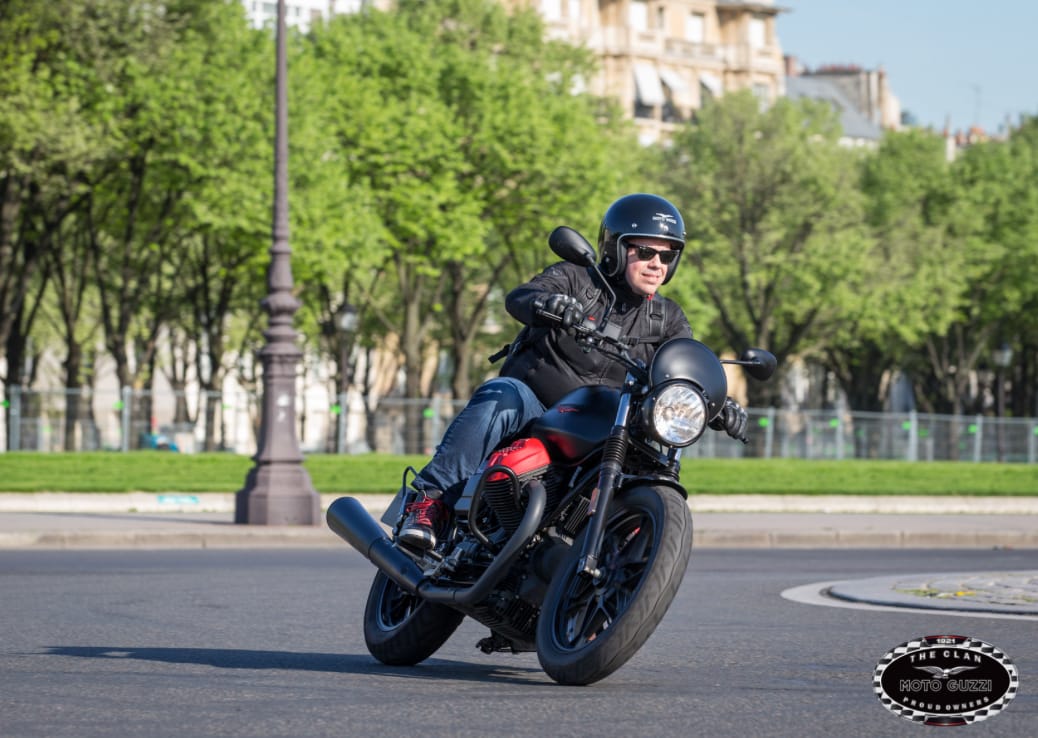 The features he enjoys most on his bike are the riding position and its great manoeuvrability, both in the city and on trips in the countryside. Also, the engine with its improved output, enhanced fluidity and reduced vibrations, and of course the style of the bike: the short mudguard, the saddle with its red stitching, and the Eagle on the fuel tank.
“For me the Moto Guzzi brand stands for freedom, to be able to move around how I want, even in a metropolis like Paris, where the number of bikers who share my Moto Guzzi passion is increasing daily.”