FABIO COFFERATI: FROM MILAN TO TOKYO ON A VESPA FOLLOWING THE FOOTSTEPS OF ROBERTO PATRIGNANI, 57 YEARS LATER 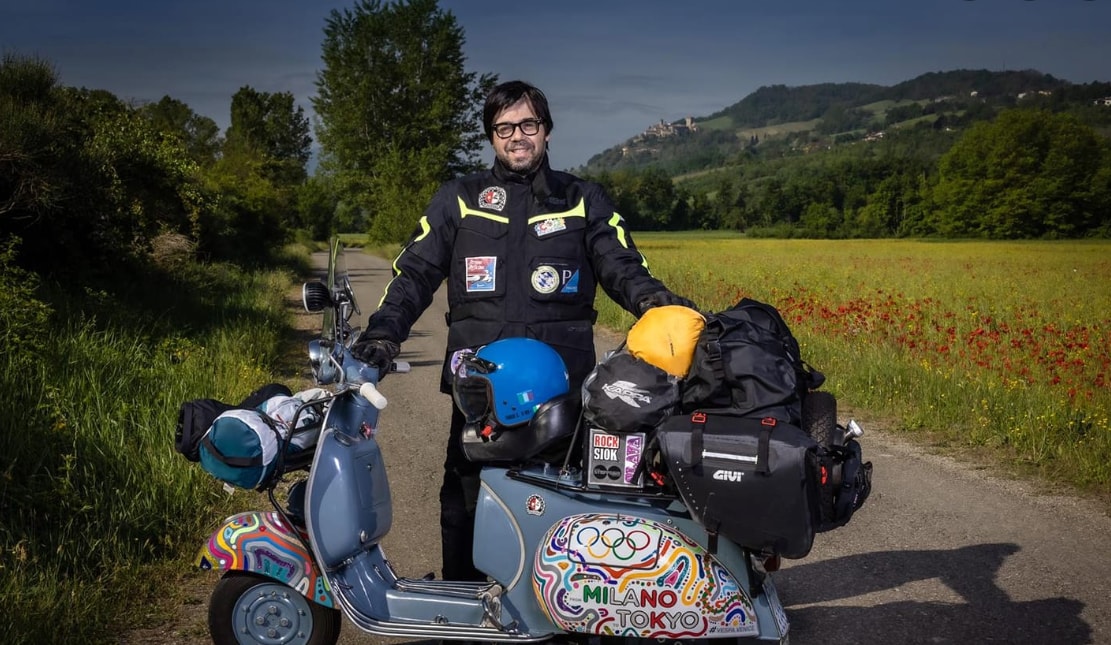 June 2021 – Fabio Cofferati left Milan on Sunday, 13 June 2021, astride his 1963 Vespa 150 VBB2, enhanced by artist Luca Moretto's decorations. Destination: Japan, for the 2020 Tokyo Olympics, XXXII Edition, postponed last year and scheduled to be held from 23 July to 8 August in 2021. In fact, “Vespa RAID MILANO-TOKYO OLIMPIADI 2020” [Translator’s note: MILAN-TOKYO 2020 OLYMPICS VESPA EXPEDITION] is the title of the new challenge reminiscent of the one tackled 57 years ago by journalist, author, rider and traveller, Roberto Patrignani: more than 13 thousand kilometres travelled astride a Vespa in 1964, from Milan to Japan, in 85 days. His son, Franco, paid tribute to that trip on its 50th anniversary, crossing the United States coast to coast on a Vespa. Here is the 2014 Wide article. 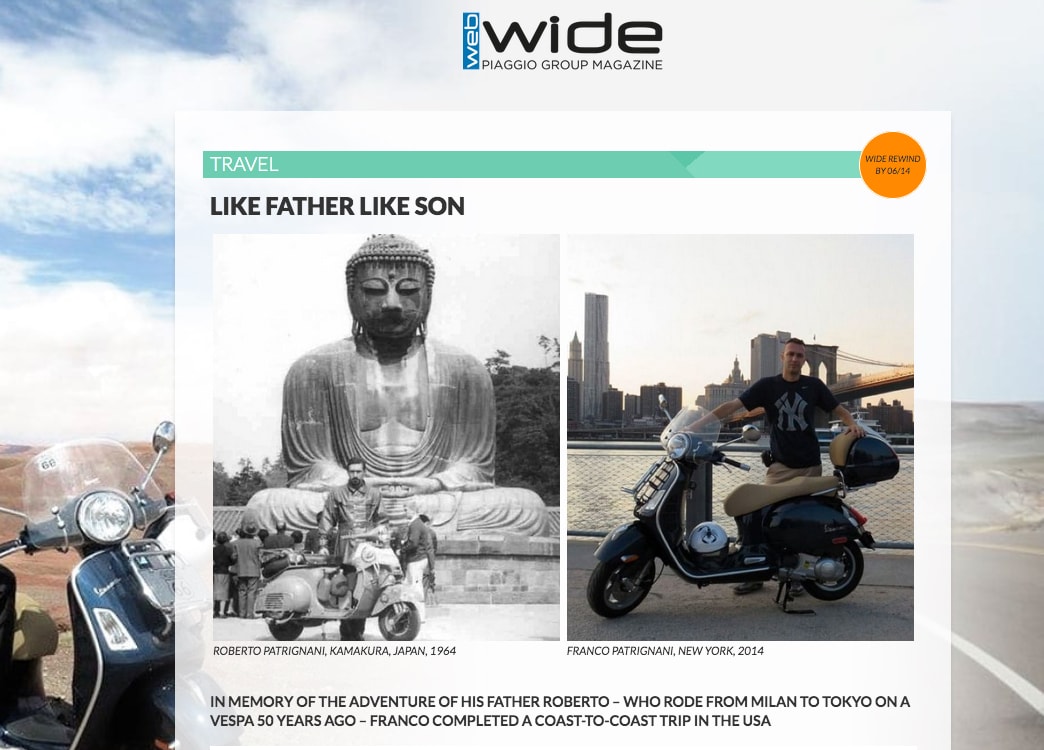 Roberto Patrignani’s voyage was extraordinary, adventurous, dangerous and a strong inspiration for Fabio, an enthusiastic Vespista from Vespa Club Piacenza. At his departure from Corso Sempione, he confirmed for members of the press that he intends to tackle the same route as Patrignani. From Italy to Switzerland, continuing on to the Russian border, then onward... with the goal of meeting up with the Italian Olympic athletes at “Casa Italia” in the Tokyo Olympic village.
GOOD LUCK FABIO, may the road be with you!

ARTISTIC VESPA WITH THE TOUCH OF LUCA MORETTO. Essential baggage, Italian and Japanese flags, the Olympic rings on the windscreen, a supplementary backrest for support over all those kilometres in the saddle, and additional lights.

It’s Fabio’s vintage Vespa outfitted for the long voyage. Already special like this, but with an artistic touch that makes it unique anywhere in the world. In fact, the light blue livery is enhanced by decorations done by the Italian artist from Jesolo (Venice), Luca Moretto, who painted the front mudguard and wheel cover with the chromatic themes of his famous Vespa Venice©, completed in 2010, hand painted with embossed effect, on display at the 54th Biennial of Venice in the Italy Pavilion. 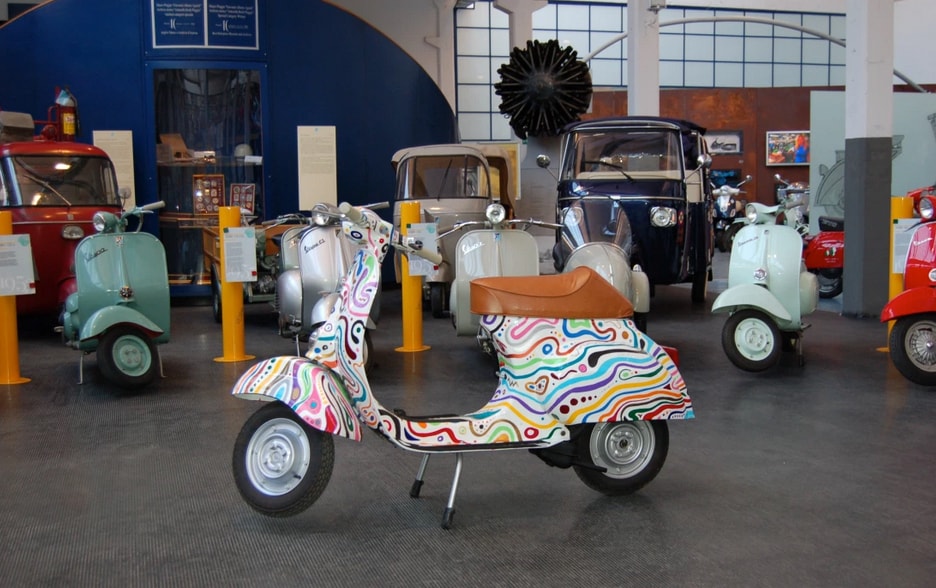 Since 2012, Luca Moretto’s Vespa Venice© has been on permanent display in the Piaggio Museum of Pontedera (photo above), considered to be one of the 5 most beautiful ICONIC versions of the famous Italian scooter. 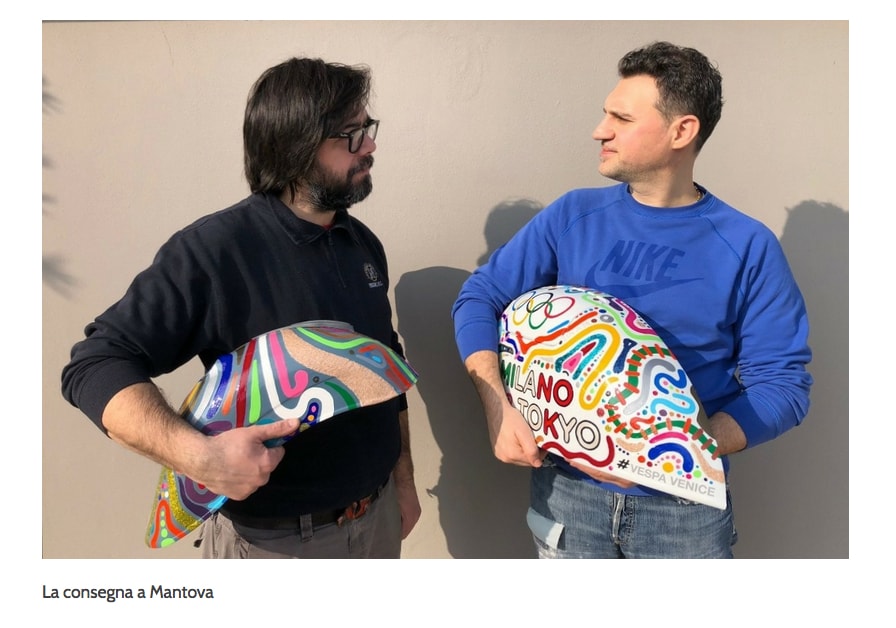 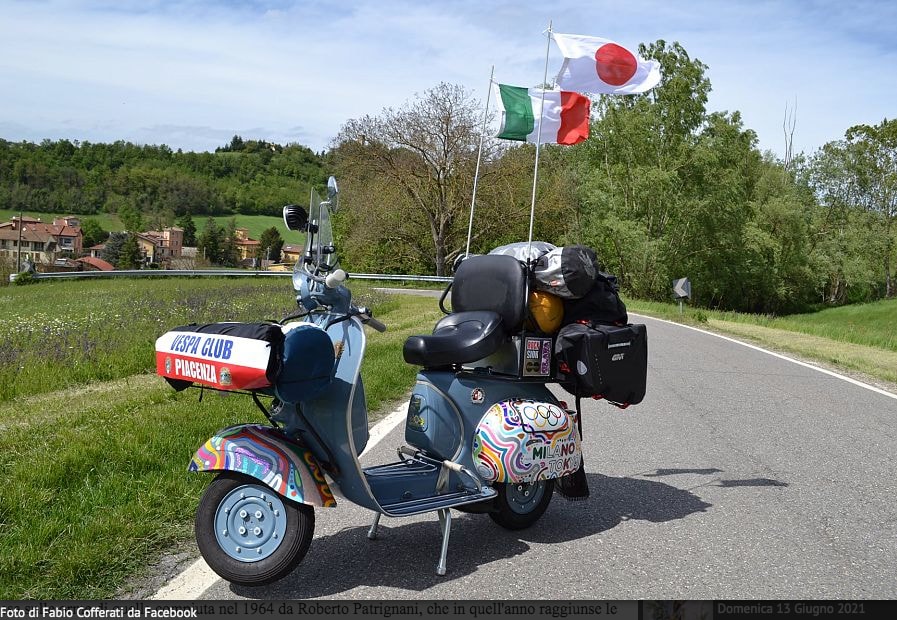