ON THE ROAD FOR 40 YEARS

GUZZISTA MANUELE BIONDI TELLS ABOUT HIS LATEST RIDE: “IN NORTHERN EUROPE WITH MY BELOVED CALIFORNIA 1400” 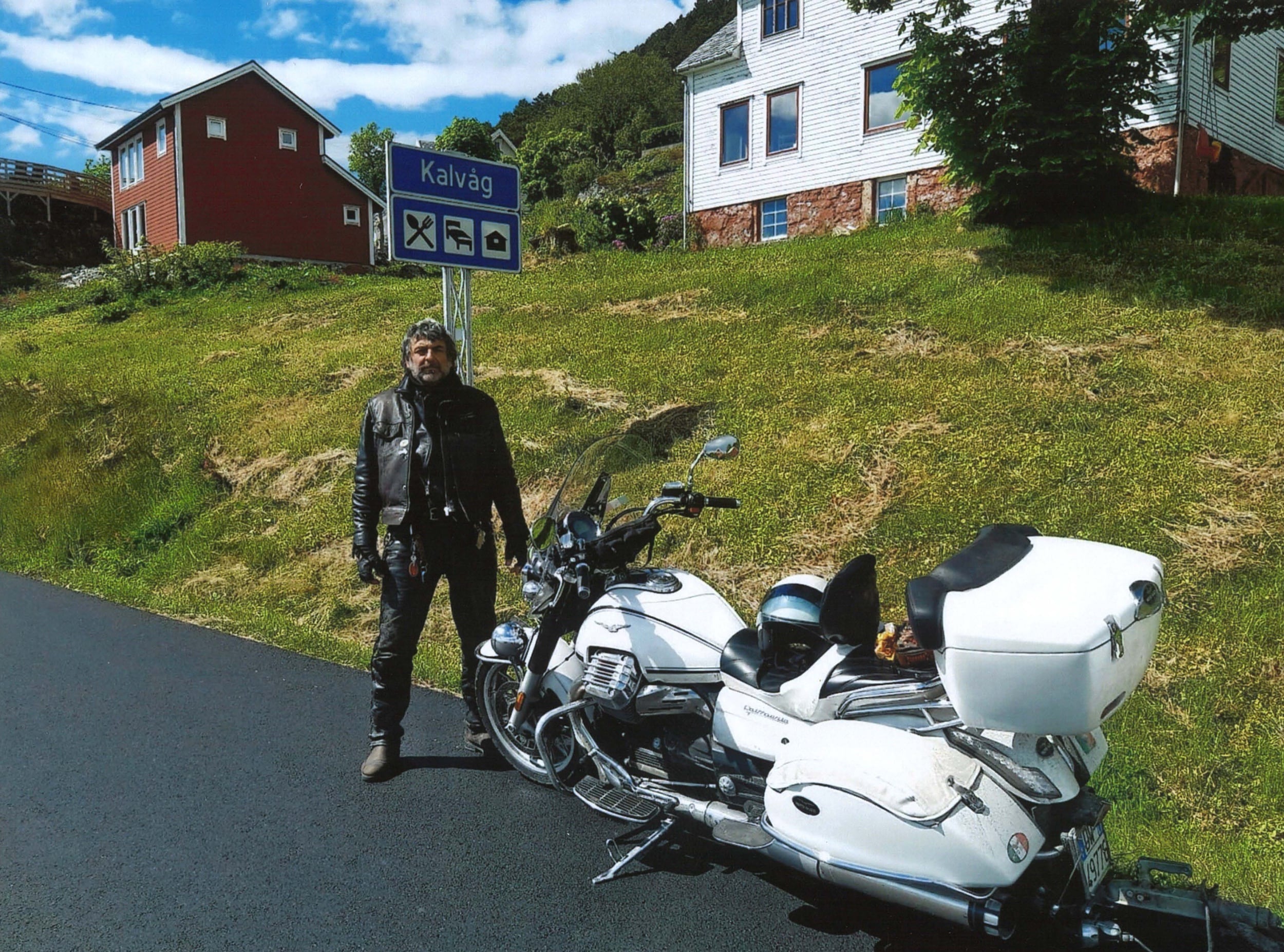 July 2019 - Manuele Biondi, from Piombino (Livorno, Italy), is a long-time Guzzista (Guzzi lover), since 1979, and this year he is celebrating 40 years of loyalty to the Eagle from Mandello. He defines himself as a “Californian Guzzista” because he has always loved the California models: beginning with his first MG California II all the way to his current Moto Guzzi California 1400 Touring with white livery. He has taken her on numerous voyages, with destinations often decided based on Guzzi rally schedules all over Europe, to participate and meet enthusiasts like him, to swap stories and travel experiences, expanding his network of friendships. He told Wide magazine about his latest ride: almost one month on the road, from Tuscany to Northern Europe.

Manuele tells us: “I departed Piombino on 10 May 2019 with the first destination being the Lignano Sabbiadoro Biker Fest in Udine and then I headed for Austria, Tarvisio, Salzburg and Munich. A stop in Germany in Hanover, with a visit to the Moto Guzzi parts and accessories dealer Stein Dinse in Schwülper. And then onward - with stops at camp sites when the weather was favourable, thanks to the special tent trailer that transforms into a comfortable bedroom, or in bungalows (nice and well furnished) when the weather was bad - putting 300 and 500 km a day behind me, between motorways and secondary roads. In all, I travelled 9,100 km in the saddle. A fantastic trip.” These are kilometres that can be added to his previous trips over a 40-year period for a total of more than 750 thousand km, all astride a Moto Guzzi.

Manuele continues: “After Hamburg, still headed north, I crossed through Denmark and over that fantastic 17 km long bridge. Then on to Sweden, to Malmö and the Guzzista rally in Hobo; then I continued on to the centre of the country, to Jönköping. Then Norway, Oslo, from Otta to Måløy and then to Kalvåg, to meet up with other Guzzisti friends, such as Mr. Bini and Karin, Austrians from Vienna, or like Enrico Cravino from Brusasco (Turin province), of the Moto Guzzi World Club and his club Il Nido delle Aquile (The Eagles’ Nest), who I met on the return trip. The Kalvåg rally was a thrill, hosted by the Norsk Moto Guzzi Club: they even gave me a ‘meritorious’ badge for the 3,800 km long Piombino/Italy- Kalvåg/Sweden trip there” (editor’s note - in the photos below). 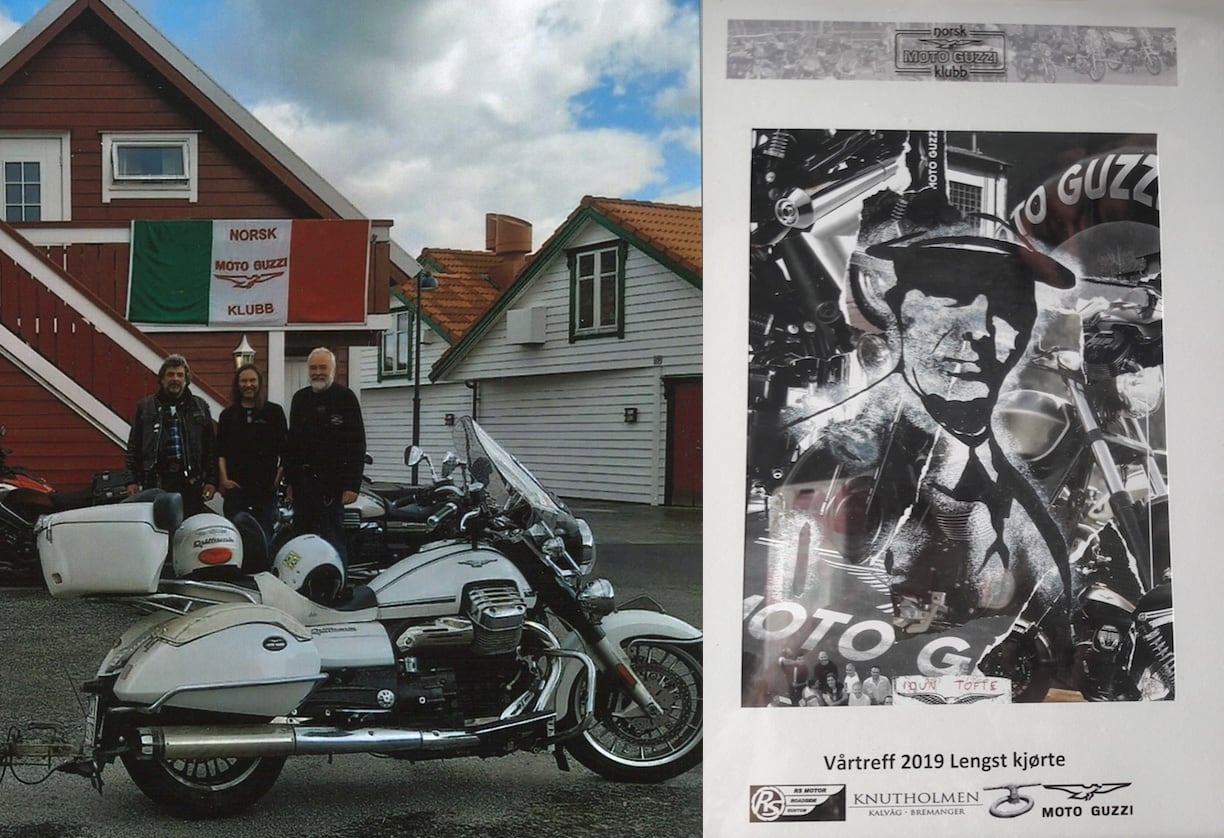 With Manuele, on the passenger’s seat of the bike, was his no-less-adventurous partner, Vera, taking the photos of the trip which ended in early June. “An unforgettable ride – they say – tiring, but thrilling; and we two astride the California with tent-trailer attached, were… a ‘travelling show’, that attracted fondness everywhere we went.”
Manuele adds: “I had already been to Sweden, on my California II. Between fjords and whales, boats and dusky skies, it is a truly unique atmosphere. There were many unforgettable places and moments: like the famous and beautiful-to-ride route 15 from Otta all the way to Måløy; like the many Guzzisti friends we met, including the nice and friendly stop in Northern Germany at the Bäker di Laer Moto Guzzi dealership (editor’s note - in the photos below). 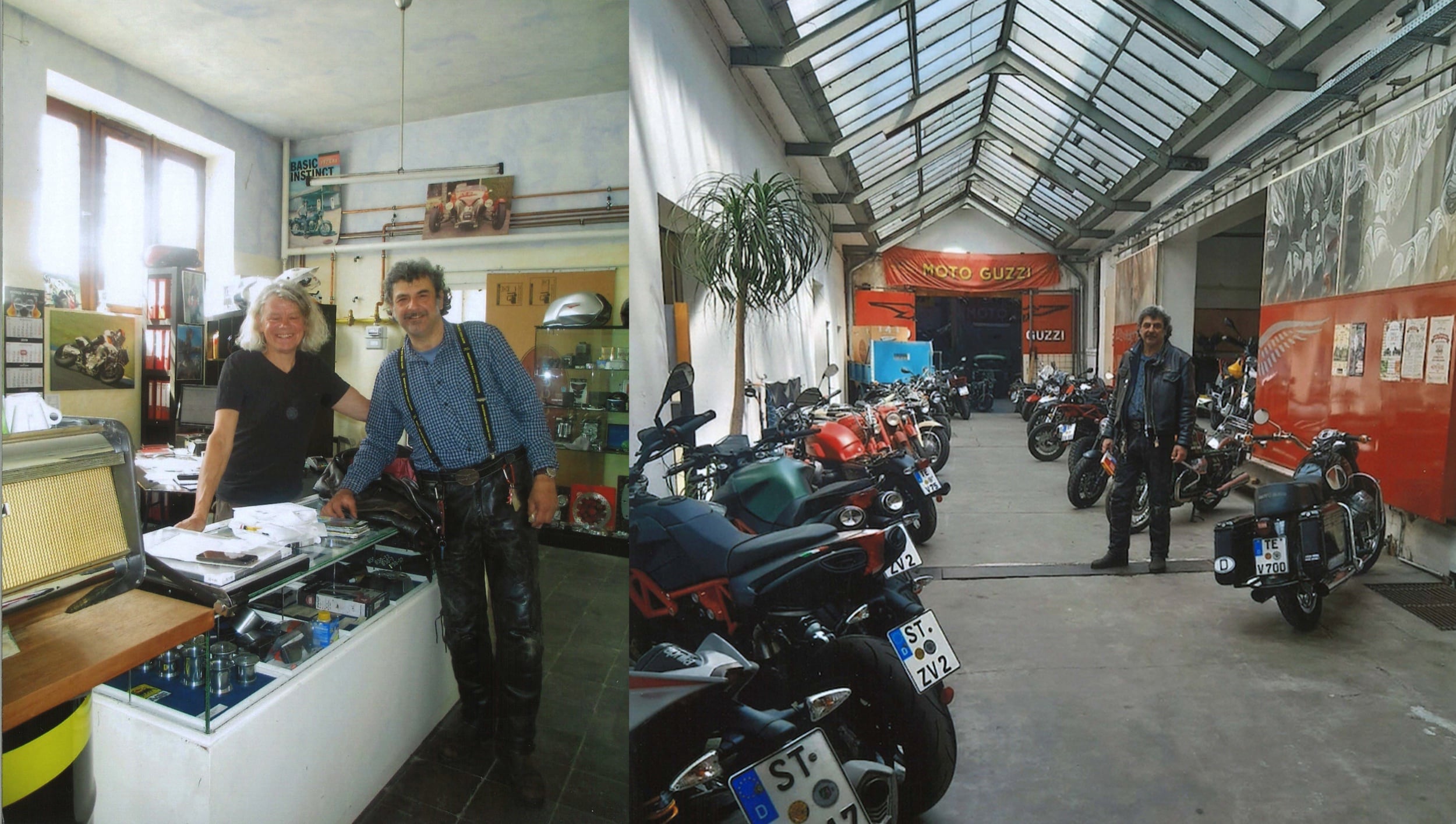 And last, but not least, on the return trip, a stop at Mandello del Lario, home of Moto Guzzi, was a must.” And now, while the memories have already been placed in the photo album, Guzzista Manuele and his friends like “Mad Pandy” (Maurizio Pandolfo) and “Carlone” (Carlo Alberto Due) are already chomping at the bit: the next destination is the international big event, the Moto Guzzi Open House (6-8 September 2019) in Mandello del Lario.

Manuele concludes (in the photos above he is with his friend Pandy in front of the Piaggio Group headquarters in Pontedera, Tuscany): “We Guzzisti (Guzzi lovers) are anxiously awaiting – for the upcoming first Moto Guzzi centennial, 1921-2021 – a new California, maybe a limited edition, with a ‘100’ on the tank and livery. Some other wishes that I would convey to the Eagle manufacturer designers and engineers: engine capacity increased to 1800 (the ideal would be 1921 cc as a tribute to the centennial), obviously air-cooled; mudguards always in metal (no plastic). And, lastly, an applause for the success of the V85 TT (I came across one during my trip!): so we are expecting other stock models, like an evolution of the Norge and maybe a Stelvio in racing style. Keep up the good work, and long live Moto Guzzi!” 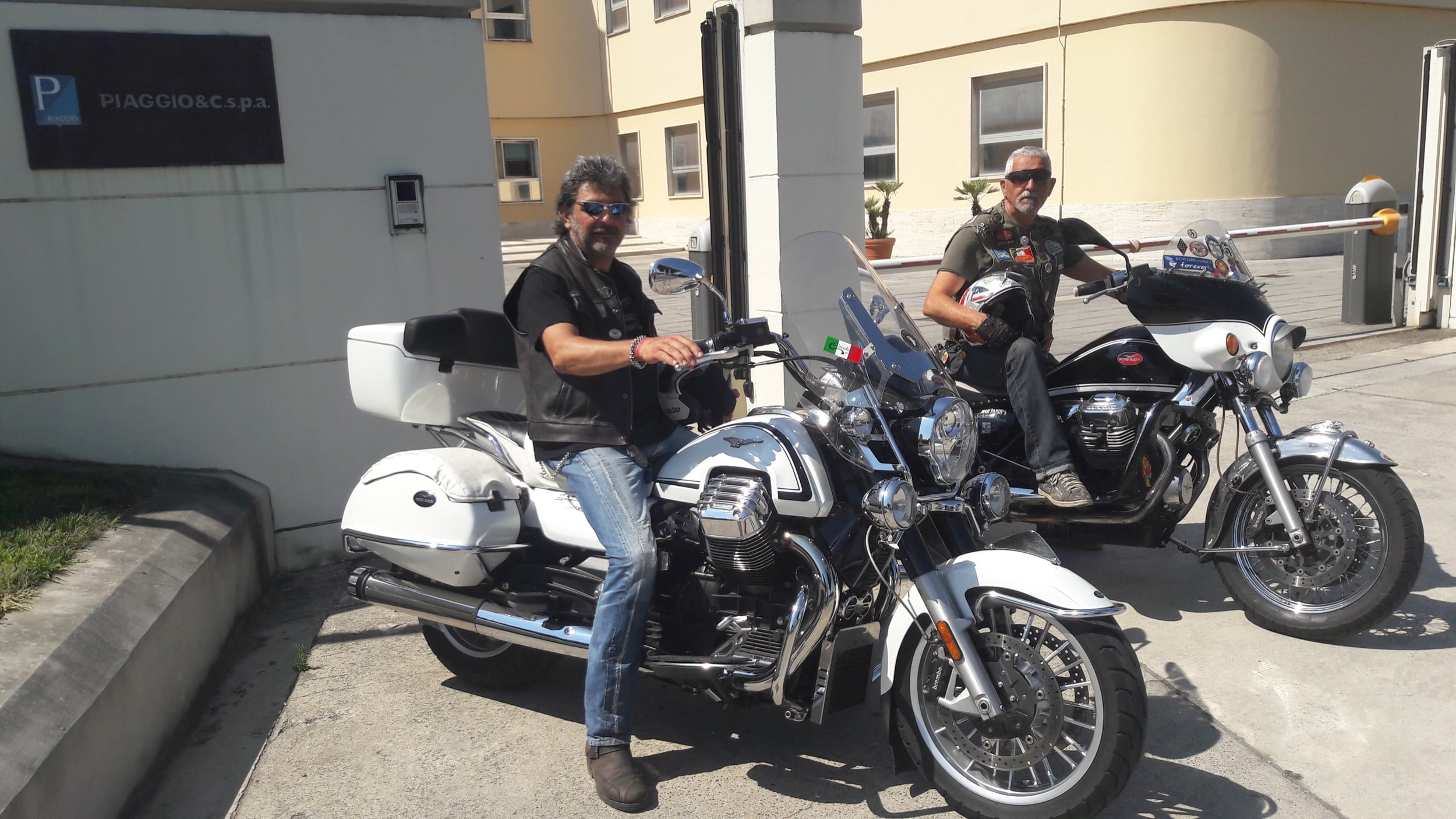 On the left, Guzzisti Manuel and Pandy on their fantastic MG California in front of the Piaggio Group headquarters, Pontedera (Pisa). 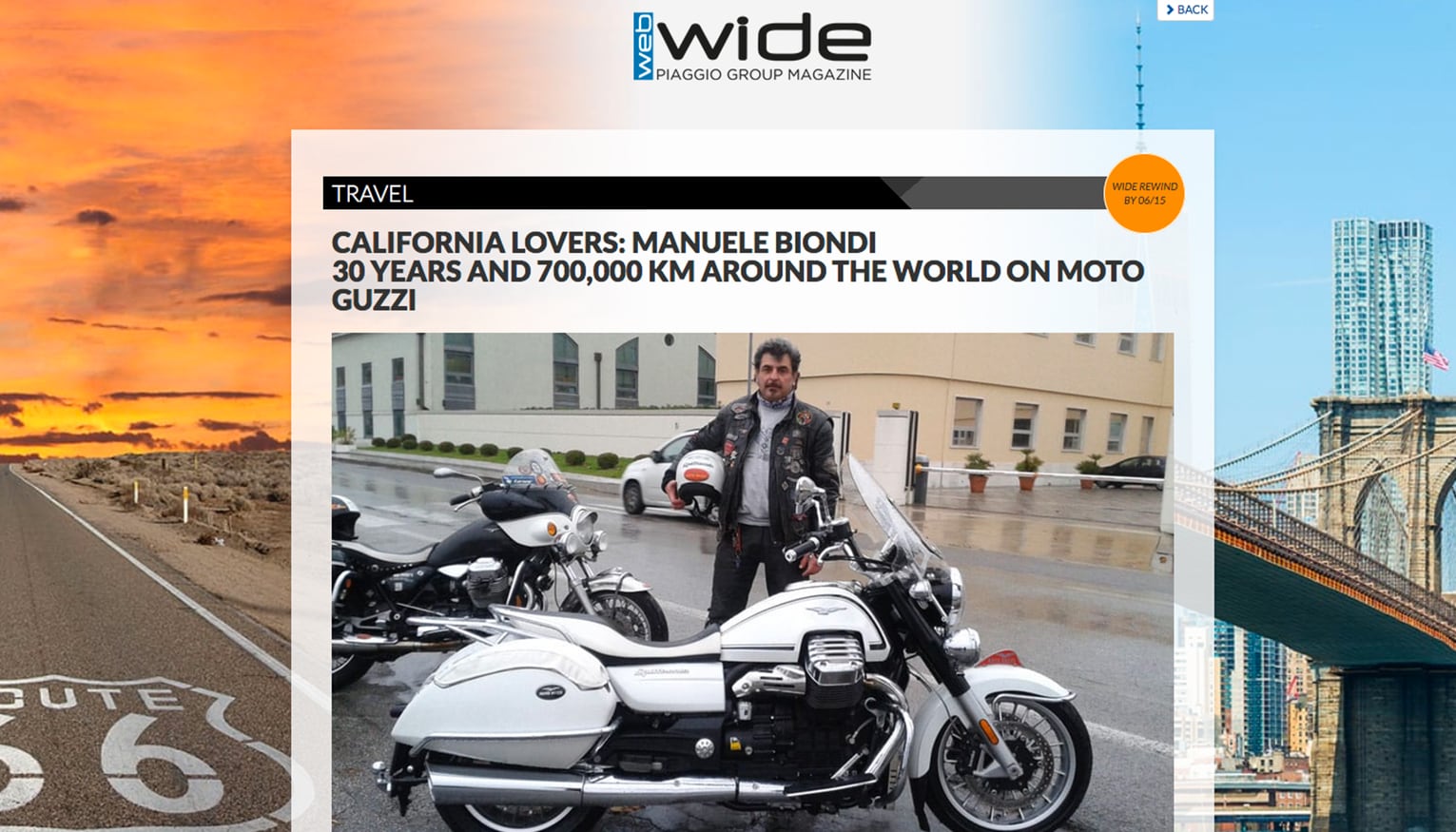