MARCO TENERINI’S UNDERTAKING: 5,000 KILOMETRES ASTRIDE HIS CIAO MOPED “OSTINATO” (STUBBORN), FROM TUSCANY TO NORTH CAPE. HERE IS THE INTERVIEW

Marco Tenerini and his Piaggio Ciao, called “Ostinato”: together they admired the northern lights in North Cape, Norway.
The portrait on the left is signed by photographer Fabio Faccioli; source of images: Marco’s FB page, Ostinato test_sociale Fan Club:
www.facebook.com/ostinatotestsociale

November 2022 – The name Marco Tenerini has every right to be added to the ranks of the great two-wheel travellers. Those capable of tackling difficulties, inconveniences, and unexpected events for the sake of reaching the destination. And one of the most popular among riders is North Cape (Nordkapp in Norwegian), the legendary cape considered to be the northernmost point of Europe in the north of Norway, about 500 km beyond the Polar Arctic Circle, made magical by the spectacular northern lights.

What makes his undertaking even more special – “Ostinato Nordkapp Ciao Tour” – is that he did it astride a moped, a 1984 Piaggio Ciao, which he christened “Ostinato” (Stubborn). An undertaking followed on various social media channel by more than 30 thousand fans, covered by national newspapers and radio stations. And it also ‘celebrated’ the 55th birthday of the Ciao, the first moped manufactured by Piaggio (1967-2022), the courageous “Cinquantino” (little fifty) that made it all the way to North Cape.

With his undertaking accomplished, after regaining his strength and welcomed with enthusiasm by friends and social media fans, Wide contacted him to find out more. Here is the interview with Marco Tenerini who gushes likeability like the true Tuscan he is and who even had the symbols of his unforgettable Norwegian undertaking tattooed on his calf: the Ciao and the famous iron sculpture, a huge atlas that dominates the North Cape.
Who is Marco Tenerini?
“I'm 47 years old and I was born in Massa (Tuscany), where I live. I also like to mention that I lived in Capraia for 13 years, a small island in the Tuscan archipelago, because my father was the lighthouse keeper there. I love surfing, fishing, and going on adventurous trips.”
He is also a fan of solo road trips... How did the idea for this ride come about?
“Yes, I love to travel. Last year, I decided to do the ‘Way of St. James’ with an old-fashioned bicycle, managing to arrive in Compostela in about 15 days as compared with the 30 it takes on foot, considering departure from Tuscany. The experience of that trip made me fall in love with solo adventures and that’s why I decided to raise the bar and challenge myself this year by going to North Cape! But 5,000 km on a bicycle was really too long for the time I had available, so I looked for a solution and found one in the Ciao, which gave me the right travel time and the suitable dose of adventure I was looking for.”

Marco Tenerini: bicycle trip on St. James Way of Compostela, all the way to Finisterre (Galicia), one of the westernmost points of the Spanish peninsula. Source of images www.instagram.com/test_sociale

But why did you choose the Ciao?
“The Ciao – my Ciao is called ‘Ostinato’ (Stubborn) – is part of the memories from my youth, the first of the mopeds that gave me my independence in my teen years. Plus, its low speed allowed me to appreciate and enjoy the landscapes I rode across, not to mention its eco-sustainability. Believe it or not, I consumed about €270 of fuel!”

How did you organise the trip? What route did you follow?
“My only organisation was to type into Google ‘go to North Cape’, and from there, I planned daily stops about every 250 km (roughly 10-12 hours per day riding the Ciao). I departed from Viareggio (Tuscany) in late September headed for the Garda Riviera. Then I crossed South Tyrol all the way to Innsbruck, Austria. Then, crossing all of Germany, I reached the port of Travemünde (Lubeck). A night ferry took me to Sweden and then, after crossing that entire country, I arrived in Finland. From there, I went to Norway and then, travelling through the underground and underwater road tunnel, I finally made it all the way to the island of Magerøya, where North Cape is. I returned to Italy in October after three weeks of travelling.”

Baggage: what did you take with you?
“Minimum baggage to make room for a 5-litre container of extra fuel, various spare parts, and oil to make the fuel mixture.”
And the stops? To eat and sleep?
“I skipped lunch, just having mini snacks along the way when I would stop to refuel the Ciao: about every 70-80 km, 3 or 4 times per leg. I either spent the night hosted by private individuals through a hospitality website or I stopped in hostels and hotels along the way. I would have dinner in pubs or cook something for myself in the hostels.”
Can you tell us some stories about the trip? You undoubtedly sparked surprise and fun along the road...
“Throughout the entire route in Italy, motorists recognised me and waved. Along the road anything and everything happened. The strangest thing was one evening when I arrived at a hotel that had no car park. They told me that I would have to leave my Ostinato on the street. After several attempts, I managed to convince the receptionist to arrange the moped inside the storefront window display of a shop that was on the ground floor of the hotel.”

What was the most difficult moment?
“I got a flat in the middle of a forest and after hours of trying to change the inner tube - I had two spares with me, but both punctured - I had to ask some camper owners for help and they loaded up my Ciao and me, taking us to the nearest town. From there, thanks to help and directions from several people, I reached a rather particular workshop which was opened specifically just to help me by a team of extremely nice guys.”
And what was the most thrilling moment? When you realised that you had reached the destination...?
“The most beautiful moment of the entire trip was undoubtedly admiring the northern lights, which I ‘encountered’ on my very first night in Norway. I was in an empty campground, and I went to the banks of a lake looking for a dark place and there, in total solitude, my Ciao Ostinato and I enjoyed an incredible show.” 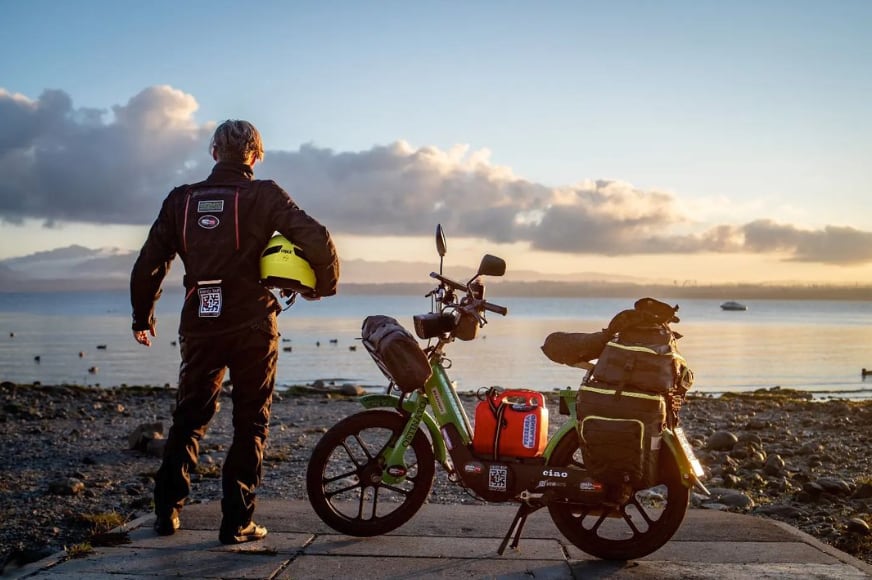 How did your Ciao perform as a travelling companion? And now what will you do with it?
“The Ciao was exceptional and even on those few occasions when it stopped, I was always able to repair it by myself. I would like it if it could be hosted in the Piaggio Museum in Pontedera for a period. Then, it will find a place on a pedestal in my living room, awaiting the next adventure.”
Your undertaking also has a charitable side, promoting a fund raiser for the Meyer paediatric hospital in Florence...
“Yes. In fact, many asked for a souvenir of the trip, so I decided to set up dedicated merchandising through a ‘print on demand’ website and all the proceeds of this initiative will go to the Meyer hospital in Florence.”
Do you already have another trip in mind?
“Yes, I have a thousand ideas for the next trip. The vehicle could be the Ciao again or perhaps another, but that will depend on the distance I want to travel. In any case, one of the lines that guides my trips is that without fatigue there is no joy. In other words, if I had reached Norway by air, I would certainly have been able to see the northern lights and North Cape in just a few hours, but I would undoubtedly not have experienced the same joy as having reached my goals after many days of sacrifice and fatigue.”

Marco Tenerini documented his trip with daily live feeds on his social media profiles, Marco Tenerini on Facebook and test_sociale on Instagram.