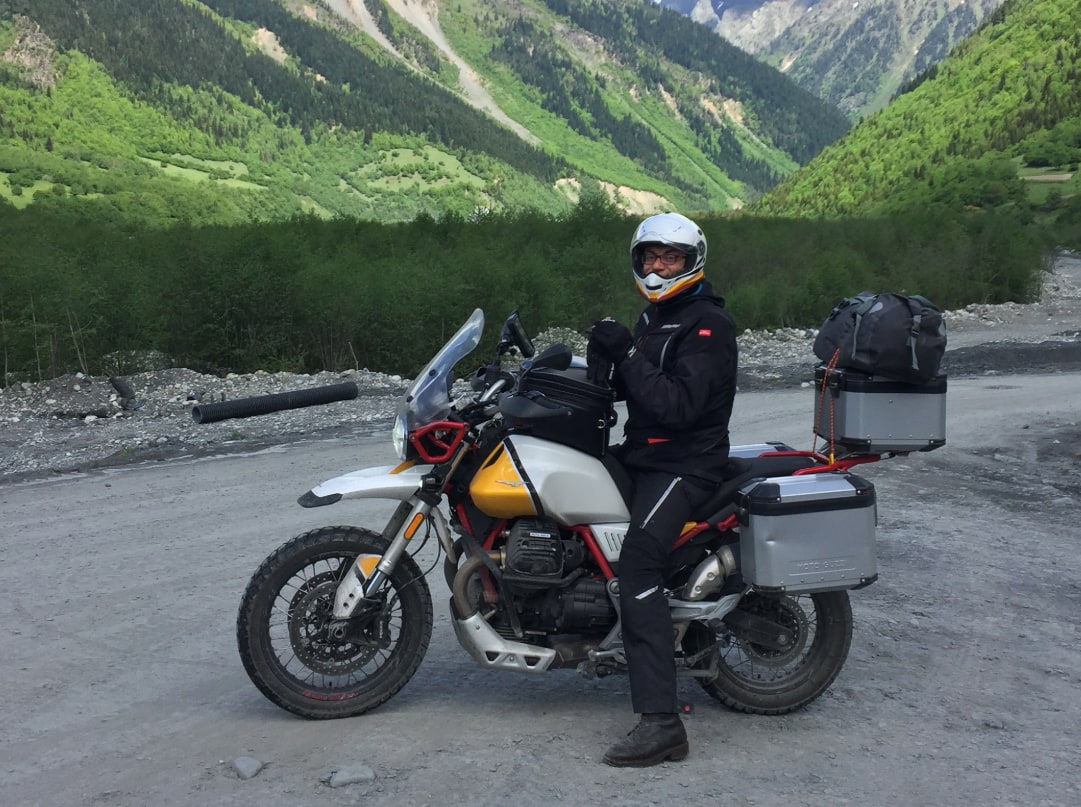 September 2019 – The new Moto Guzzi V85 TT has been through its first summer on the road spectacularly: many Guzzisti have put it through its paces on all types of routes. And it has given them countless thrills and great satisfaction. Many stories have reached our editorial office about trips astride the “all-terrain” bike from Mandello. We have chosen a few of the most “intriguing” ones. And let’s not forget to mention the many Guzzisti on their way to the Moto Guzzi Open House 2019 big event (6-8 September) and those who participated in the Moto Guzzi Experience 2019 tours (www.motoguzzi.com/en_EN/Experience/Tours), with the MG V85 TT as the big news of the season. Everywhere and for everyone, the MG V85 TT proved to be a reliable and fun travel companion.
ANDREA GRECO IN ARMENIA. The 53-year-old journalist from Milan travelled 10 thousand km astride the Eagle-brand enduro: a month on the road, from 19 May to 19 June, starting from Milan and heading south, to Bari, to catch the ship to the Turkish coast, then going up to Georgia on the super highway that runs along the Black Sea. In Caucasus he encountered dirt roads and lots of rain, then heading toward Armenia - destination Areni - where the “bird cave” is located, discovered by archaeologist Boris Gasparyan and dating back 6 thousand years. Rituals and sacrifices were held here, but surprising evidence was also found that can be attributed to the production of wine (press, wineskins, basins). 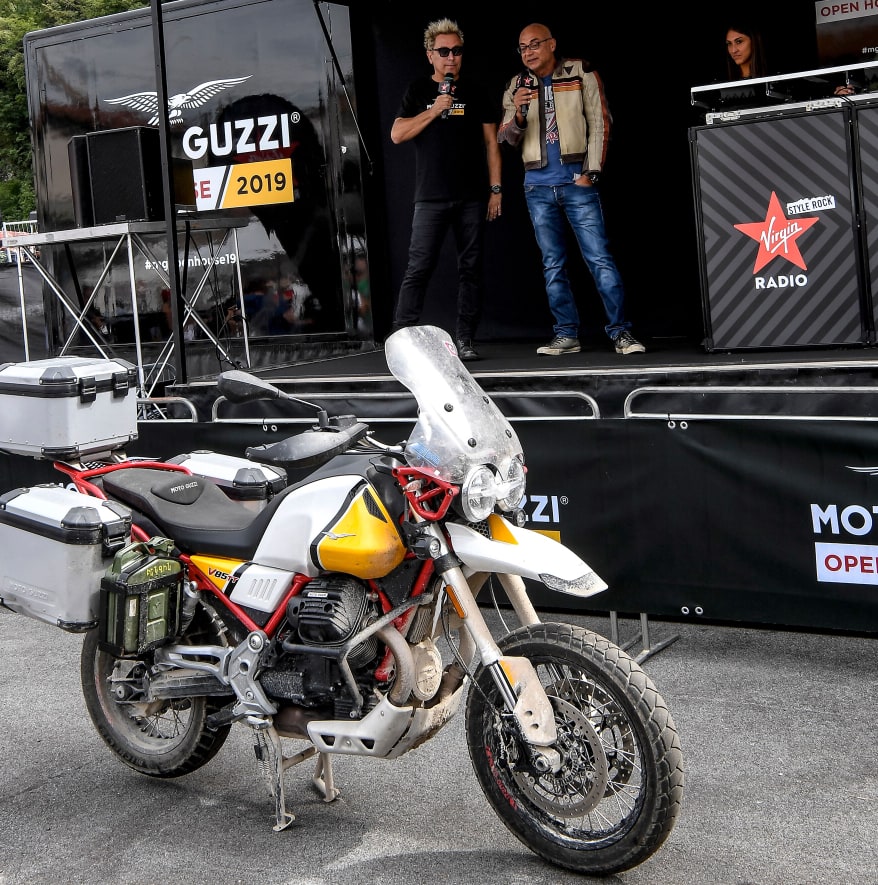 It was a challenging return on a cargo ship to cross the Black Sea and then he headed for Italy from Odessa. Andrea Greco recounted his adventure for the Style magazine (Corriere della Sera, daily Italian newspaper) readers and then on stage at the Moto Guzzi Open House 2019 in Mandello, interviewed by DJ Ringo (in the photo above).
Here is the article and reportage, published in Style Magazine:
style.corriere.it/top-class/motori-e-yacht/diari-della-motocicletta-da-milano-allarmenia-con-una-moto-guzzi
style.corriere.it/speciali/diari-della-motocicletta-da-milano-allarmenia-moto-guzzi

MAX FERRARA IN ICELAND. 20 thousand km and lots of off-roading astride the Moto Guzzi V85 TT between June and August. This was his tenth trip, leading a group of bikers (participating in Islandainmoto.it tours); the previous trips had been done on other bikes, such as the MG Stelvio 1200 NTX. An expert rider, Max made this comment on Motospia.it about his ride with the new MG: “This Guzzi proved to be the total weapon, because it is comfortable, you can load it up like a pack mule... but it is still agile and easy to manage, both off-road and on the road, and in particular in low speed manoeuvres.

For example, when you stop in various places to see geysers or a waterfall, the parking is a bit precarious with slopes and gravel on the ground. While I saw my travel companions having no small difficulty parking and moving their maxi enduro bikes, with the V85 TT, I was able to make tight turns and perfectly manage the dynamic balance. And then there is the absolute star of the show: the engine, my true passion.”
Here is Max Ferrara’s article on Motospia.it:
www.motospia.it/20-000-km-con-la-nuova-moto-guzzi-v85-tt 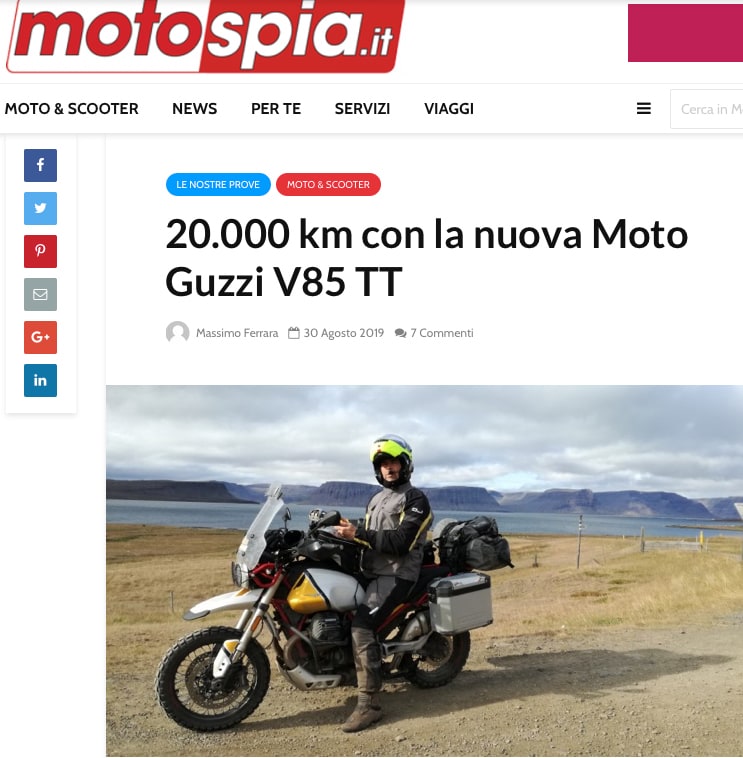 CROMILLA TO NORTH CAPE. “Where Giuseppe Guzzi took the Mandello Eagle” (91 years ago, astride his Moto Guzzi GT 500 Norge): namely Cape North, among the Scandinavian Fjords, the “classic” biker’s destination, especially Guzzisti, in memory of the feat accomplished by the brother of Carlo Guzzi, founder of the brand. The indomitable biker lady Cromilla, astride his Moto Guzzi V85 TT, led the “Destination North Cape” ride (between late August and early September, for Motoexplora) and left this comment on the Moto Guzzi World Facebook page: “You ask me how I liked it. I am not a technician, as you know, but I’ll try to explain my riding sensations...  I travelled 9,194 km, feeling good straight away. The higher top fairing is useful and the seat is very comfortable, even right for my long legs. The V85TT convinced me on country roads and on the motorway, where it gave more powerful bikes and larger engine capacity bikes a run for their money, but it was in the mountains that it astonished me. It is very fun to ride on curves and hairpin turns, often even in the rain!

In the traffic and road work in Germany it was agile and quick. Of course, I have practised in the chaos of the Grande Raccordo Anulare (Rome Ring Road), but the weight of just over 220 kg really makes a difference.  The cruise control is extremely useful which, with the speed limits in Norway, made the trip much easier to manage.  But the true strong points for me were fuel consumption and range. It’s true that I was not travelling at sustained speeds, but I was really struck when I read 585 km and 25 km/litre!  Last, but not least, to those who told me that something would have broken and that I should take along a can of oil... I am very pleased to contradict you! Absolutely nothing broke and we did not have to add even one drop of oil!”
THE “DESTINAZIONE NORDKAPP” RIDE PHOTO DIARY:
www.facebook.com/media/set/?set=a.645442015866143&type=3 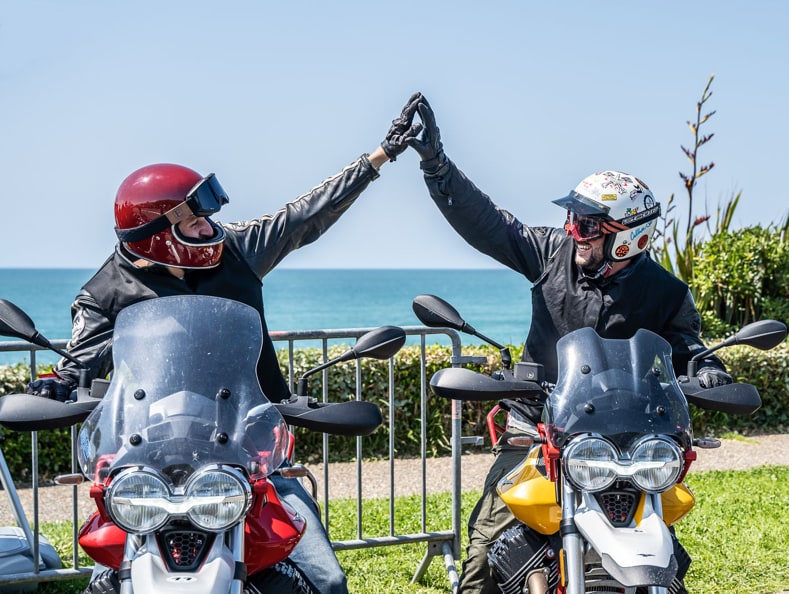