THE UNDERTAKING OF ANIBAL GUZMÁN MIRANDA: ON A VESPA GTS ACROSS THE HIGHEST AND LARGEST SALT DESERT IN THE WORLD 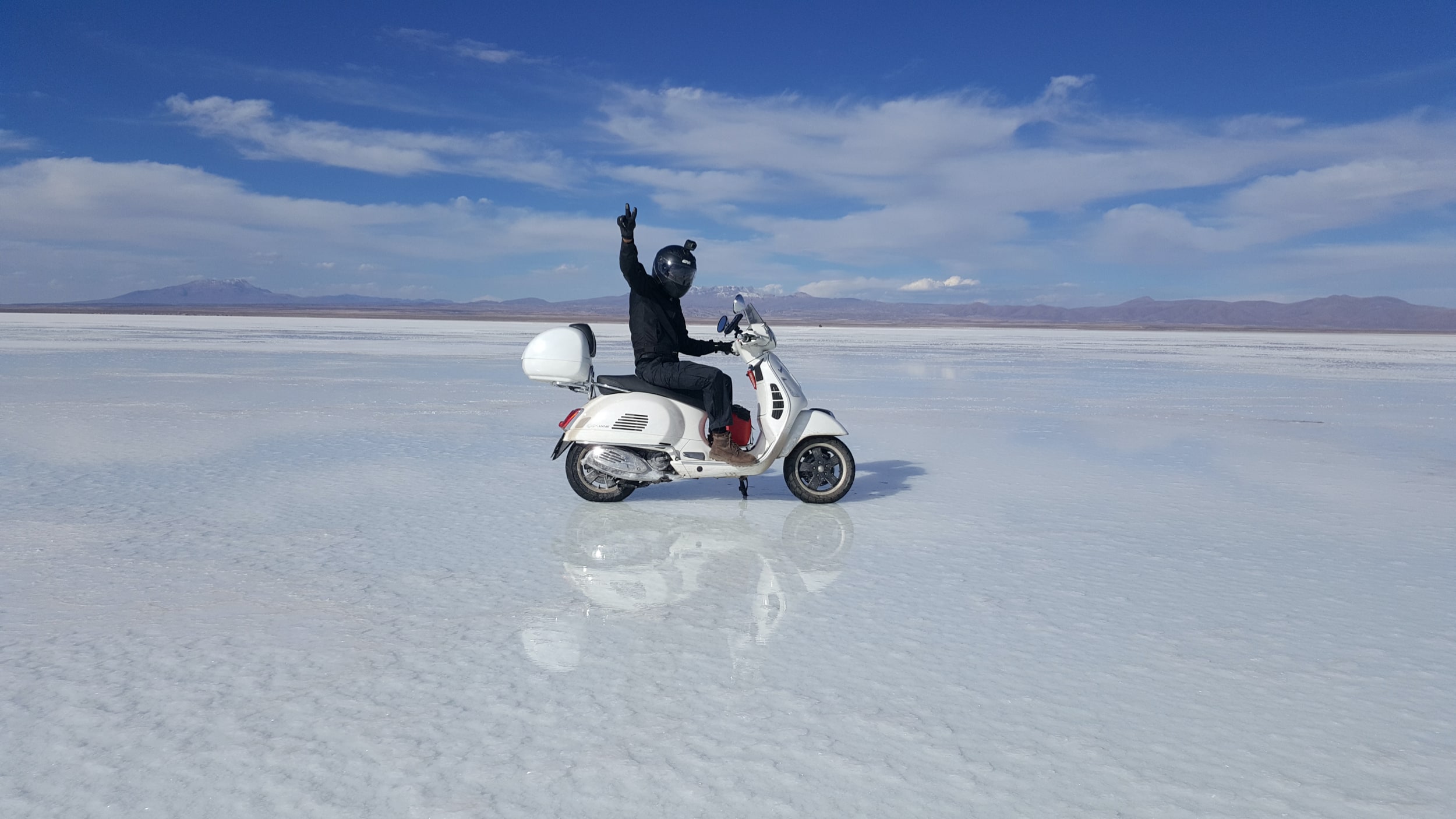 A YOUNG MUSICIAN AND SOFTWARE ENGINEER FROM SANTA CRUZ DE LA SIERRA TRAVELLED 2,500 KM TO SALAR DE UYUNI, IN THE BOLIVIAN ANDES, TO AN ALTITUDE HIGHER THAN 3,600 METRES. A UNIQUE TERRITORY, CREATED BY THE DRYING OUT OF A PREHISTORIC LAKE, WHICH STRETCHES OUT OVER MORE THAN 11,500 THOUSAND SQUARE KM, THE KINGDOM OF THE PINK FLAMINGOS HERE ARE THE SPECTACULAR PHOTOS SENT IN BY THE PROTAGONIST. 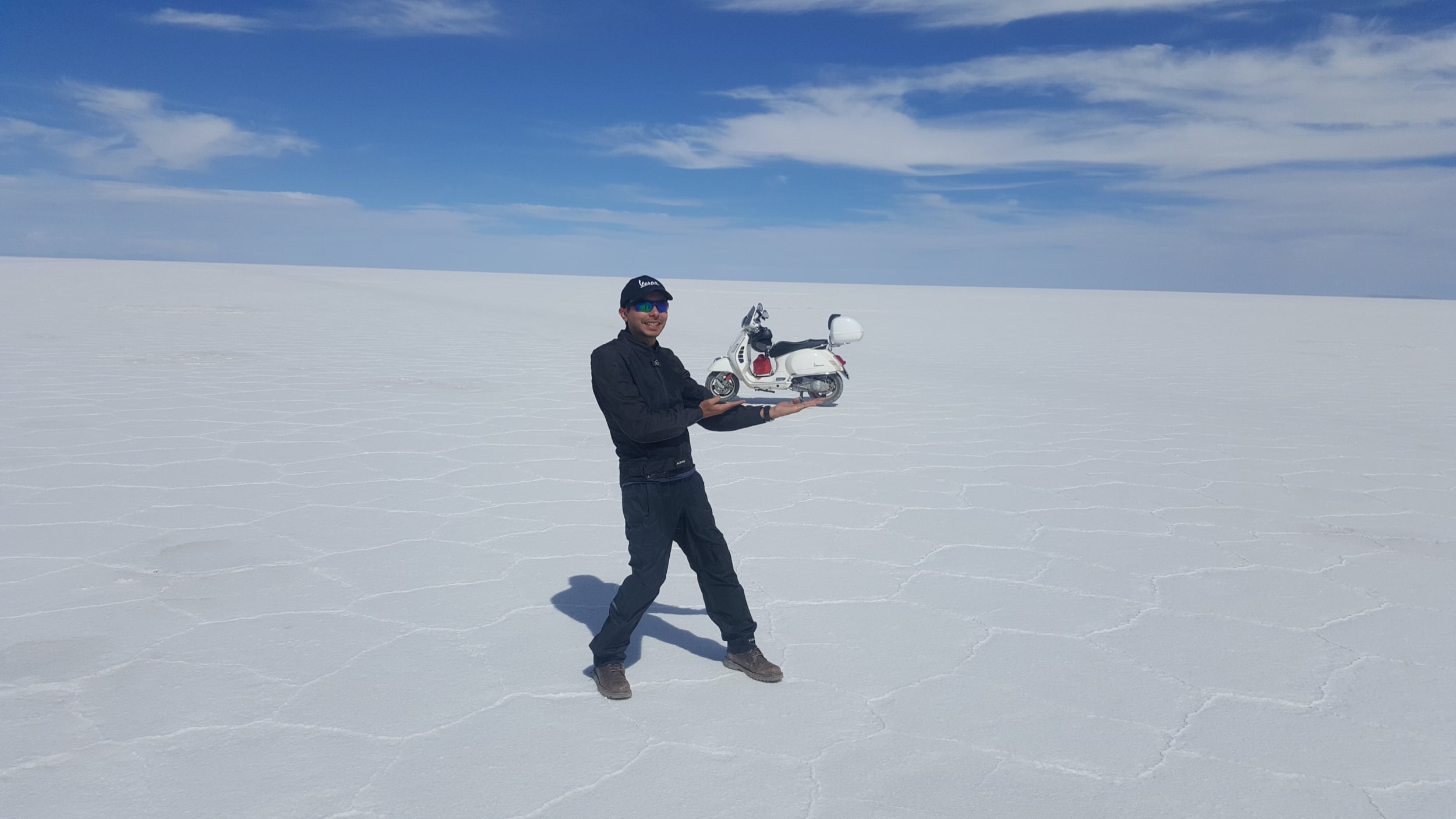 October 2019 - Our editorial staff received the message in late September: “On a VESPA to the largest salt desert in the world. Hello, I want to share photos of a trip that I made to the largest and highest salt desert in the world. This place is called the "Salar de Uyuni" and is in the high plateau of Bolivia (Andes mountain range)”. Signed: Anibal Guzmán Miranda, Software Eng., CSP, PMI-ACP, Santa Cruz de la Sierra – Bolivia.

WOW! What an undertaking: on a Vespa across the largest desert in the world, called the Salar de Uyuni, on the plateau of the Bolivian Andes. And the protagonist, Anibal, attached gorgeous (and entertaining) photographs of the adventure he experienced astride his Vespa GTS, in a place that is unique in all the word, created from the drying out of a prehistoric lake – at an altitude higher than 3,600 metres and stretching out over more than 11,500 square km – kingdom of the pink flamingos. A beautiful “lunar” landscape where the dimension of time and space is lost. 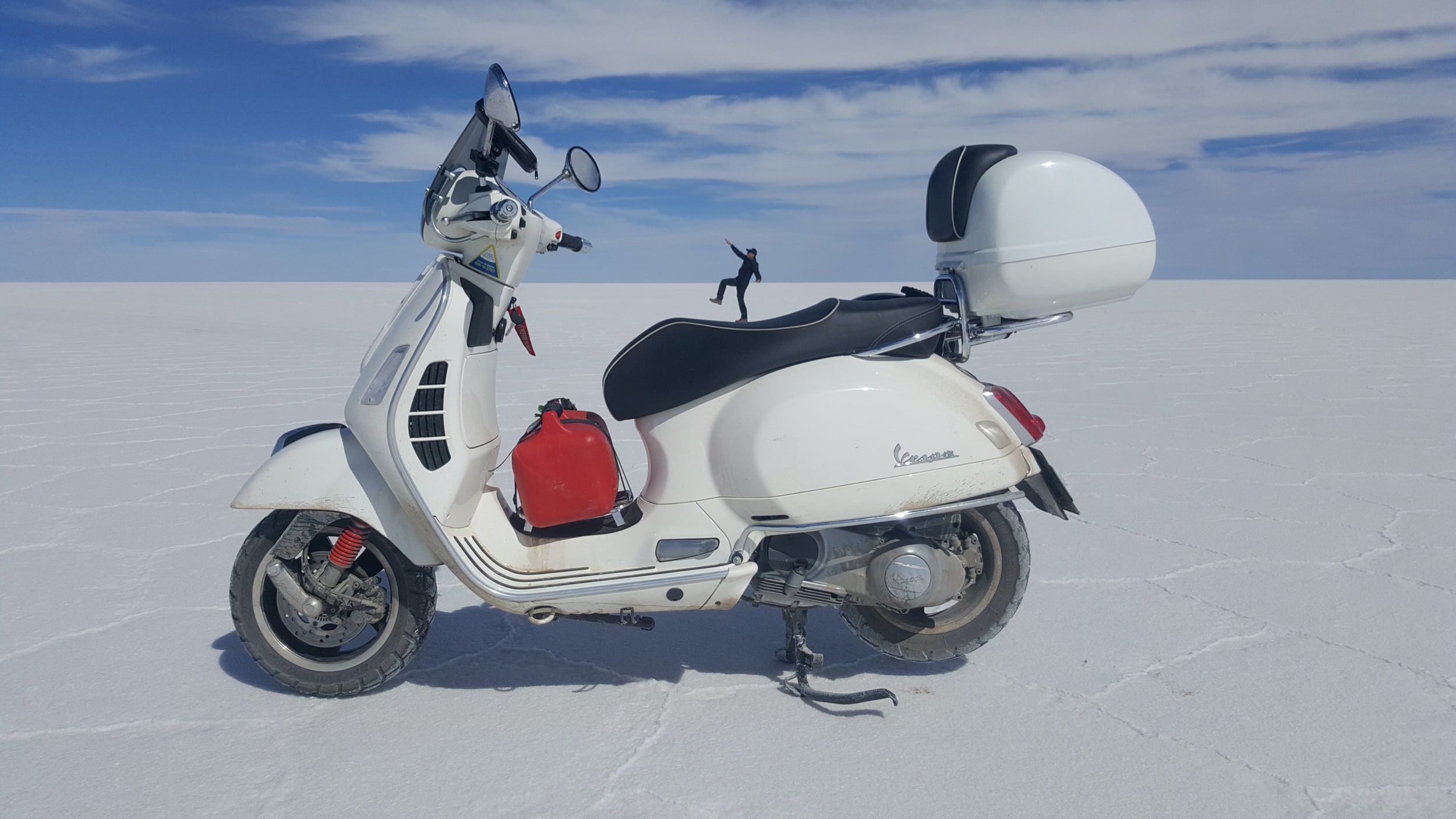 We contacted Anibal to find out more. This is his story: “I am 34 years old. I am a musician and software engineer. I was born in Santa Cruz de la Sierra, in Bolivia, and I live here. I currently work as a Project Manager at Tienda Amiga S.A.” How did you become a Vespa enthusiast? “Initially, my taste for Vespa stemmed from my Italian heritage. My grandmother told me stories of my great-grandfather who was Italian and moved to Bolivia to avoid the Second World War. Plus, I fell completely in love with Vespa after seeing one in person in 2012. I now have 3 Vespas. Each one is a different year and has different characteristics. In Bolivia, supporting Vespas is complicated, but my passion overcomes all and surpasses everything.” 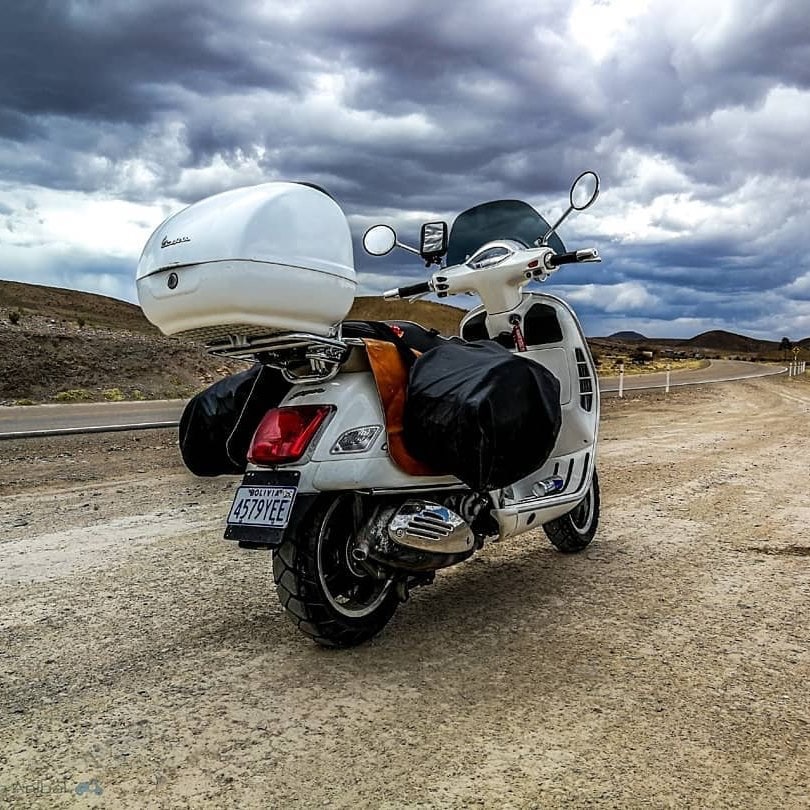 Tell us more about this fantastic trip… “First of all, I decided to go on holiday to Salar de Uyuni (the highest and largest salt desert in the world) because it is the primary tourist destination of my country. Then, an idea came to me to go on a Vespa - an idea that I shared and discussed with some friends who ended up supporting me. Personally, I was a bit frightened because I did not know how the Vespa would react to a 2,500 km route with such different climatic conditions and altitudes. 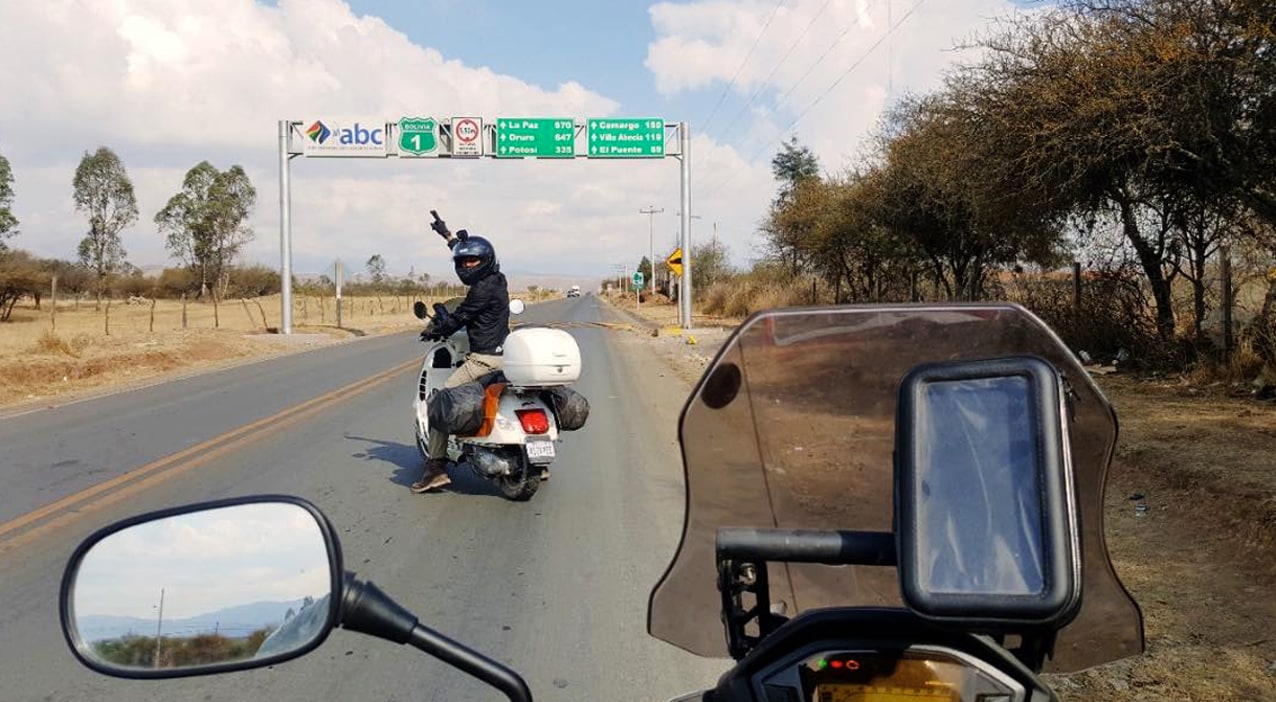 We departed from Santa Cruz de la Sierra, a city that is practically at sea level, and we reached the Bolivian plateau at an altitude of 4,200 metres. We also experienced temperatures of 40°C on the plains all the way to -4°C on Salar de Uyuni. It took us six days to complete this fantastic trip.” 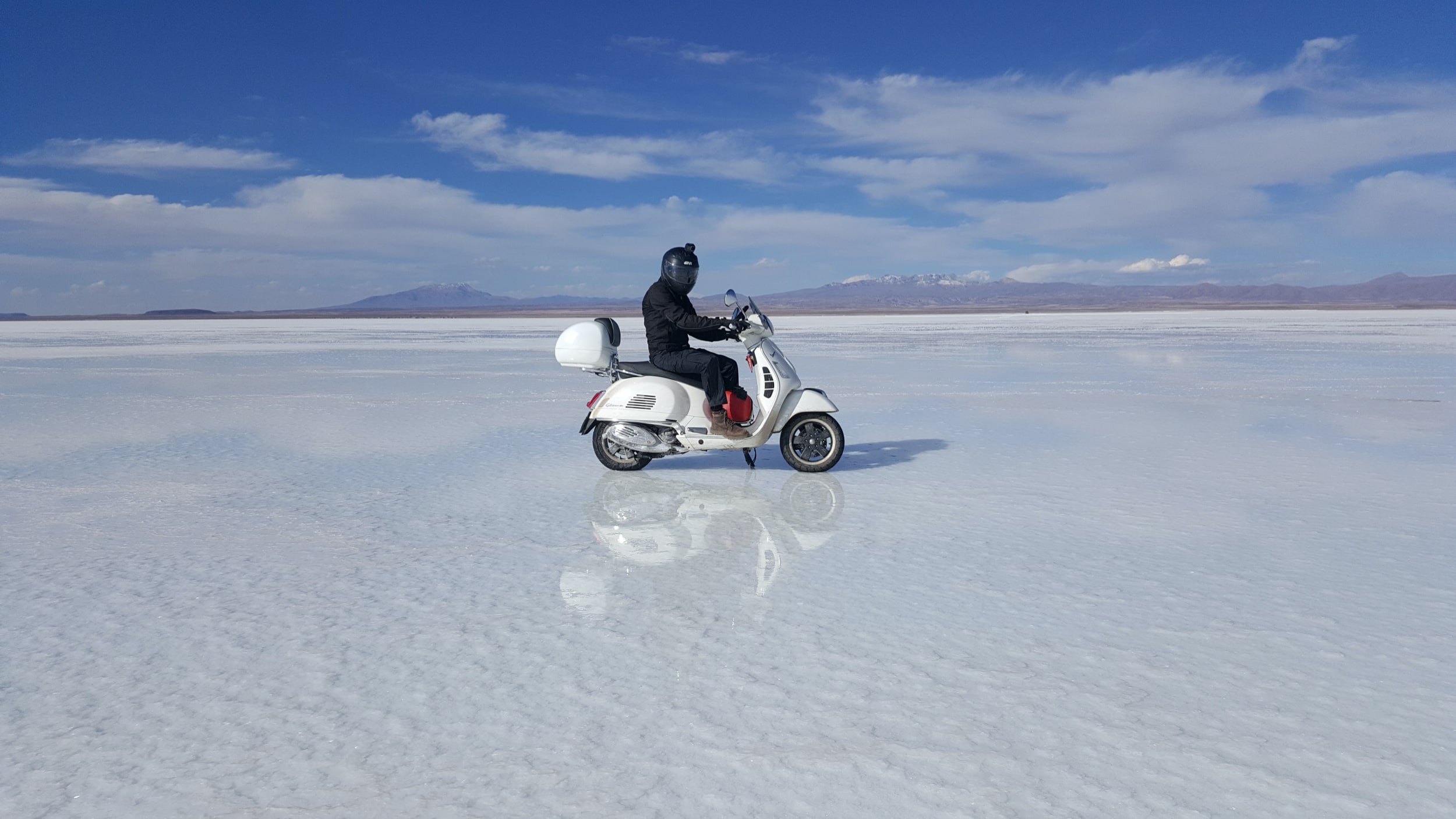 And our curiosity presses us to ask Anibal: what will your next Vespa challenge be? “My next challenge, which I am already preparing, will be another well-known tourist destination in my country. It is called ‘The Road of Death’ (Editor’s note: El Camino de la Muerte, connects Cumbre to Coroico; in 1995 the Inter-American development bank officially declared it ‘The most dangerous road in the world’. On the dirt part, just 3.2 metres wide, it winds over precipices hundreds of metres high). It is truly a dangerous road… currently, the route is used only for tourist purposes, especially for extreme sports. I hope to share this experience with you very soon.”
Good luck, Anibal! Once again, Vespa has proved to be a reliable adventure companion, even in the most extreme locations of the world. 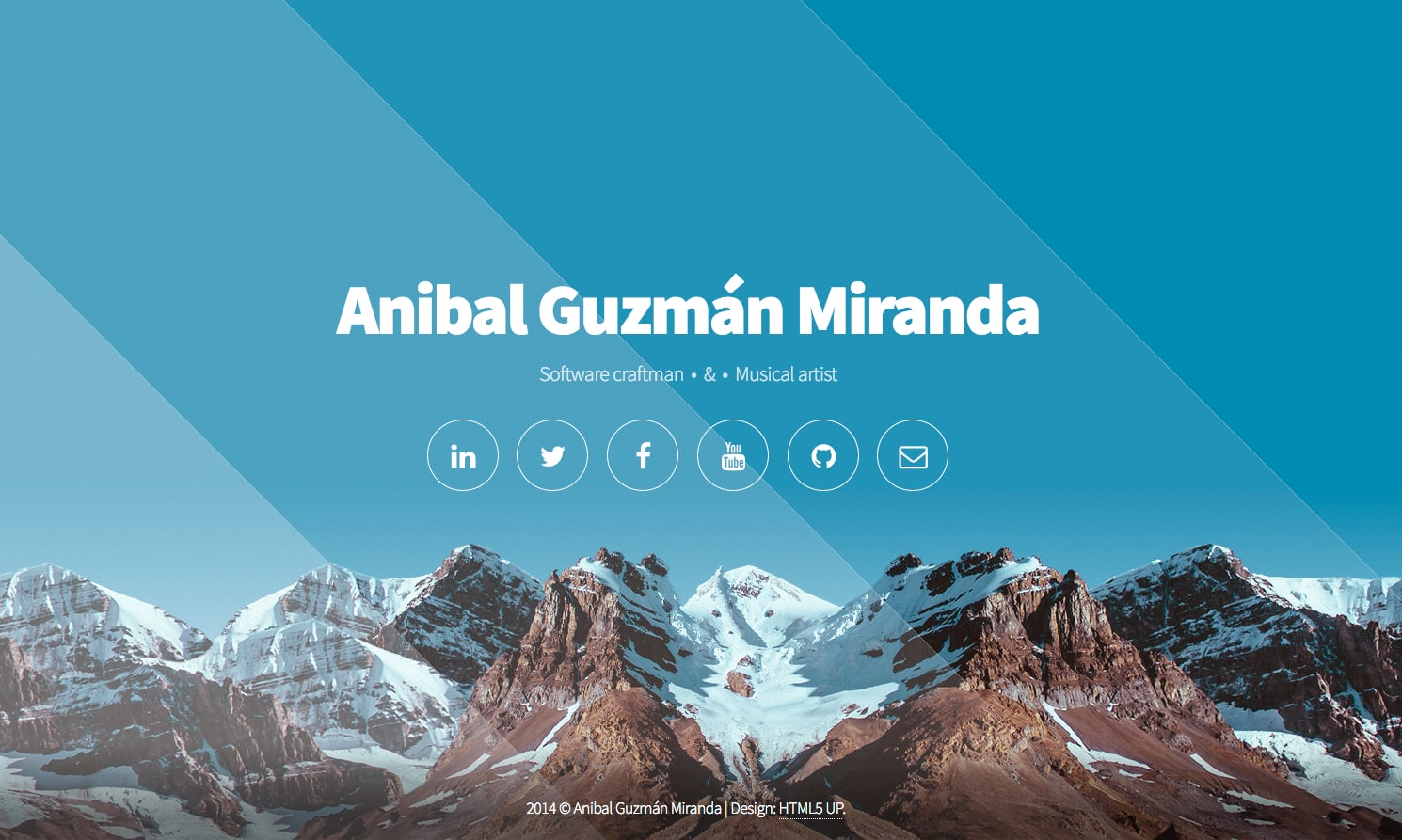