ALEIX ESPARGARÓ, MAVERICK VIÑALES, AND LORENZO SAVADORI WITH THE RS-GP AND PIAGGIO 1

AMONG THE PROTAGONISTS OF THE MILANESE INTERNATIONAL SHOW, CHEERED BY APRILIA FANS.

December 2021 – The protagonists (23 November, press day of the international two-wheel show at Milano Fiera) of the Piaggio Group press conference included the Aprilia Racing riders – Aleix Espargaró, Maverick Viñales, and Lorenzo Savadori. Aleix and Maverick did not appear astride their RS-GP racing bikes (on display in the stand and the subject of a plethora of photos) but… aboard the new Piaggio 1 electric scooter. 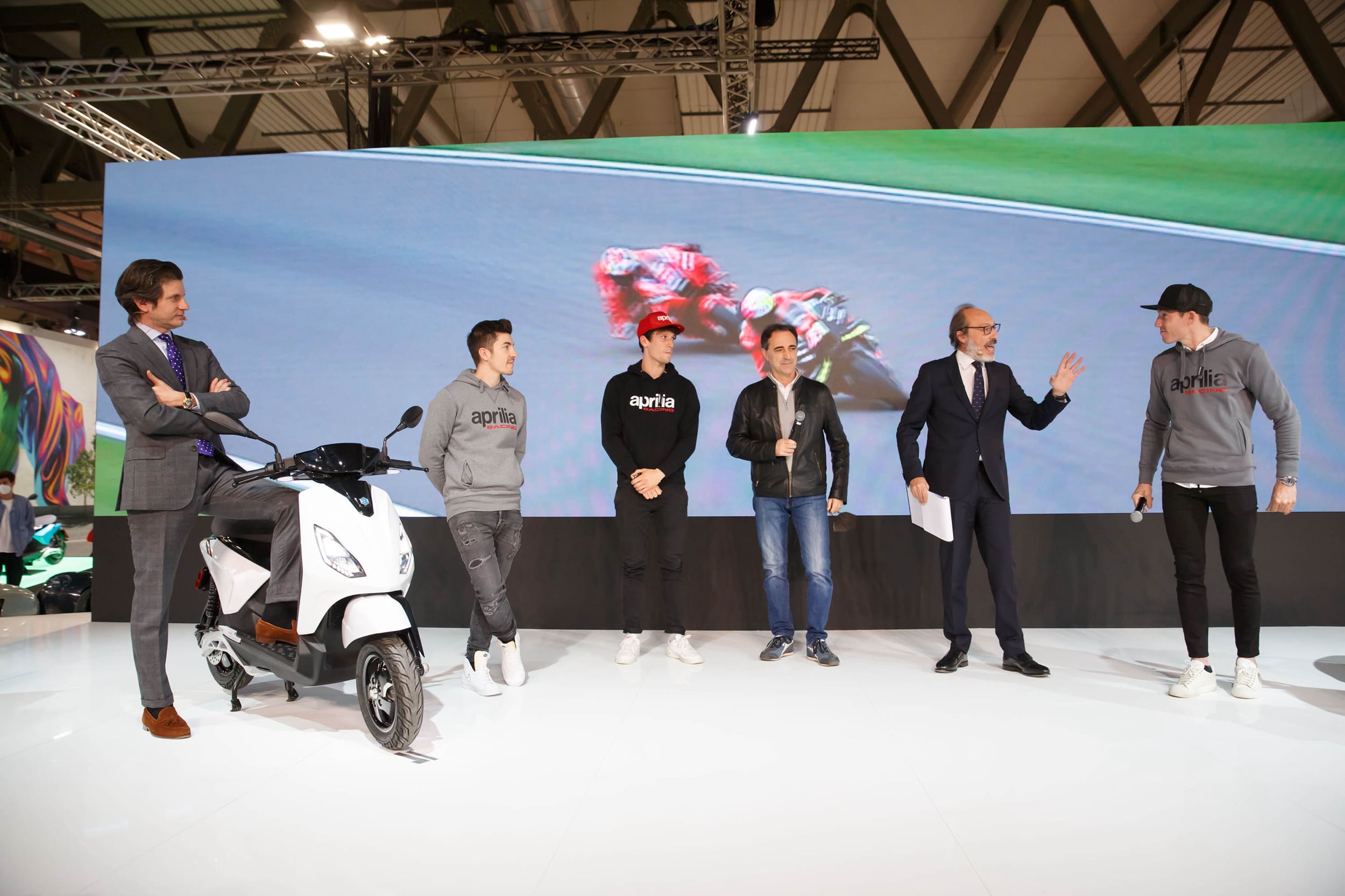 Milan, Eicma, 23 November 2021, Press Day. From the left, Dr Michele Colaninno, Piaggio Group development and product manager, on stage with the Piaggio 1 at the Piaggio Group all-brands press conference, with journalist-host Guido Meda. In the photo, the moment dedicated to Aprilia Racing: riders Maverick Viñales and Lorenzo Savadori; at the centre, Romano Albesiano, Technical Director of Aprilia Racing, Guido Meda and Aleix Espargaró, who finished the 2021 MotoGP season with a brilliant 8th place in the overall standings.

Having fun like a couple of kids, with their easy-going appearance on the stage, they surprised the large crowd of international journalists in attendance. “It’s really fun and convenient for getting around the city,” Aleix commented, getting off the Piaggio 1 scooter, “but I'm a fan of the Aprilia RS-GP.”  Laughter and applause. 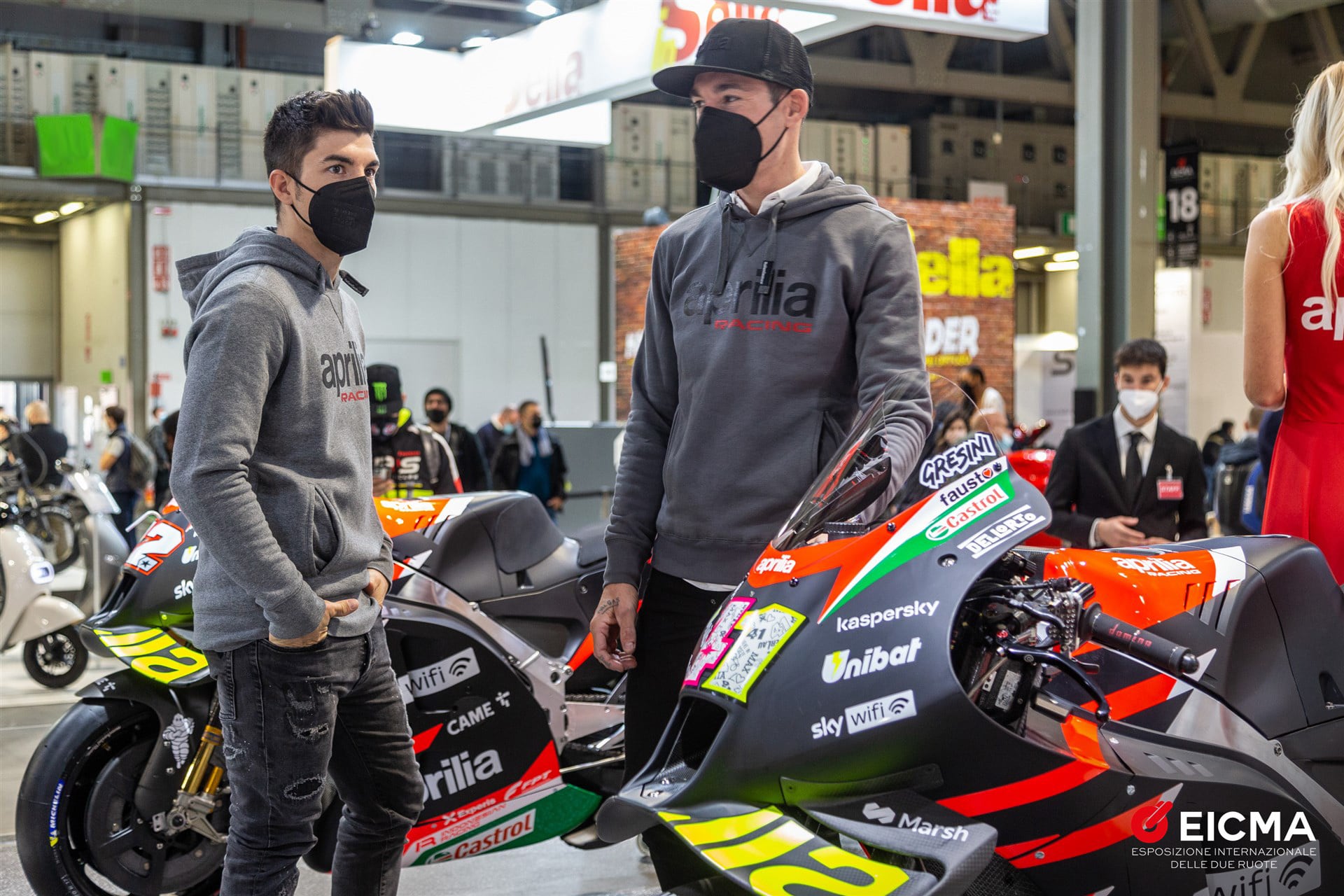 Commenting on the 2021 MotoGP season, Aleix pointed out, “the Aprilia’s step forward, after years of work which, this season, allowed me to consistently battle at the front with the best. I am very proud.” A MotoGP for the last seven years, five of which with Aprilia, Aleix finished the season in 8th place, reaching the apex with his third-place podium finish in Silverstone. 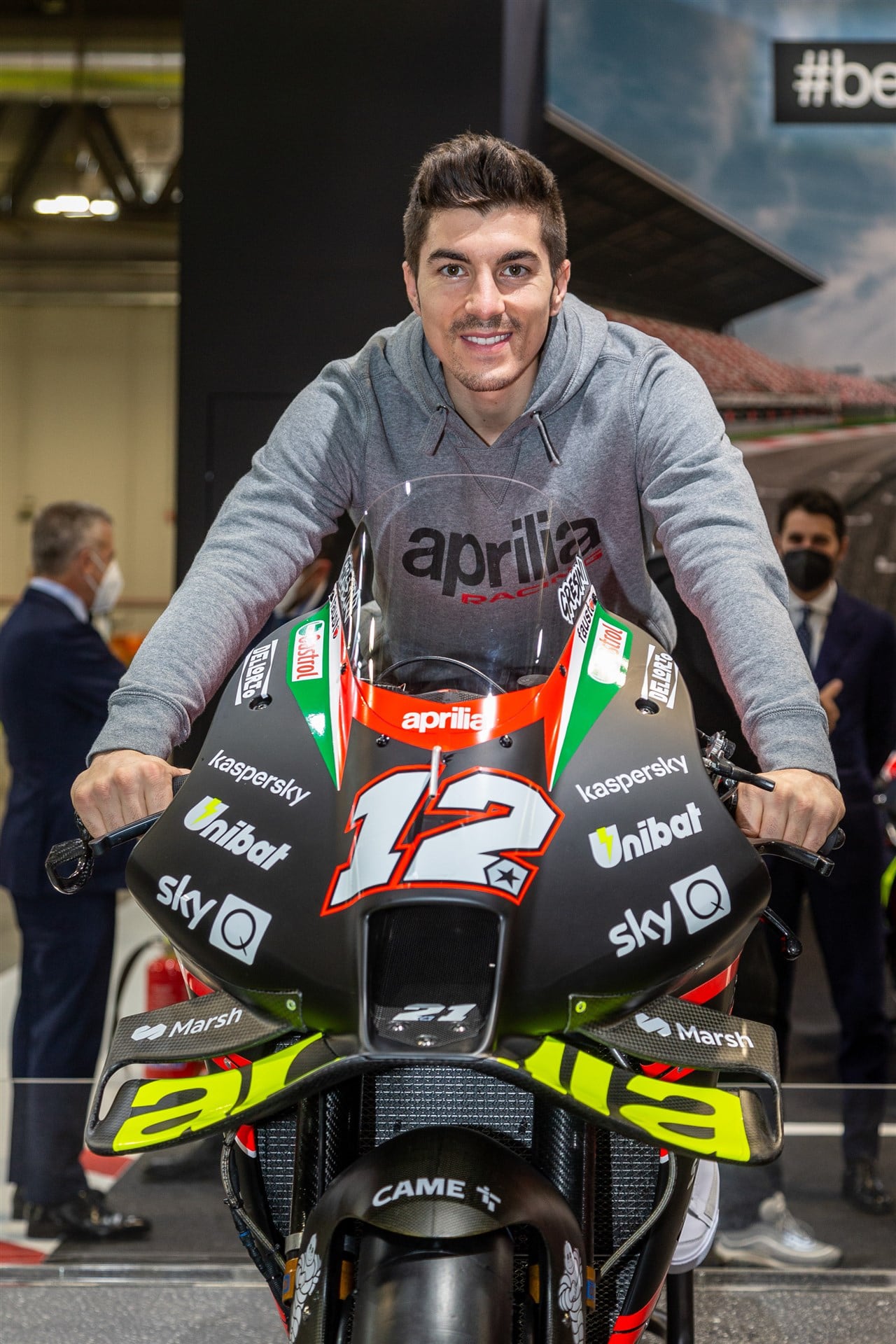 Maverick (editor’s note: in the photo above), the rider who joined the Aprilia team in mid-August and who, after the first tests in Misano, competed in the last races of the Grand Prix Motorcycle Racing World Championship, added: “I feel good on the bike and with the team. From the very first time I got on the RS-GP, I felt enormous potential and already in the last test we made an important step forward, especially in terms of ergonomics. The potential is good and the bike gives me great satisfaction. Aleix and I want to see Aprilia at the top!” 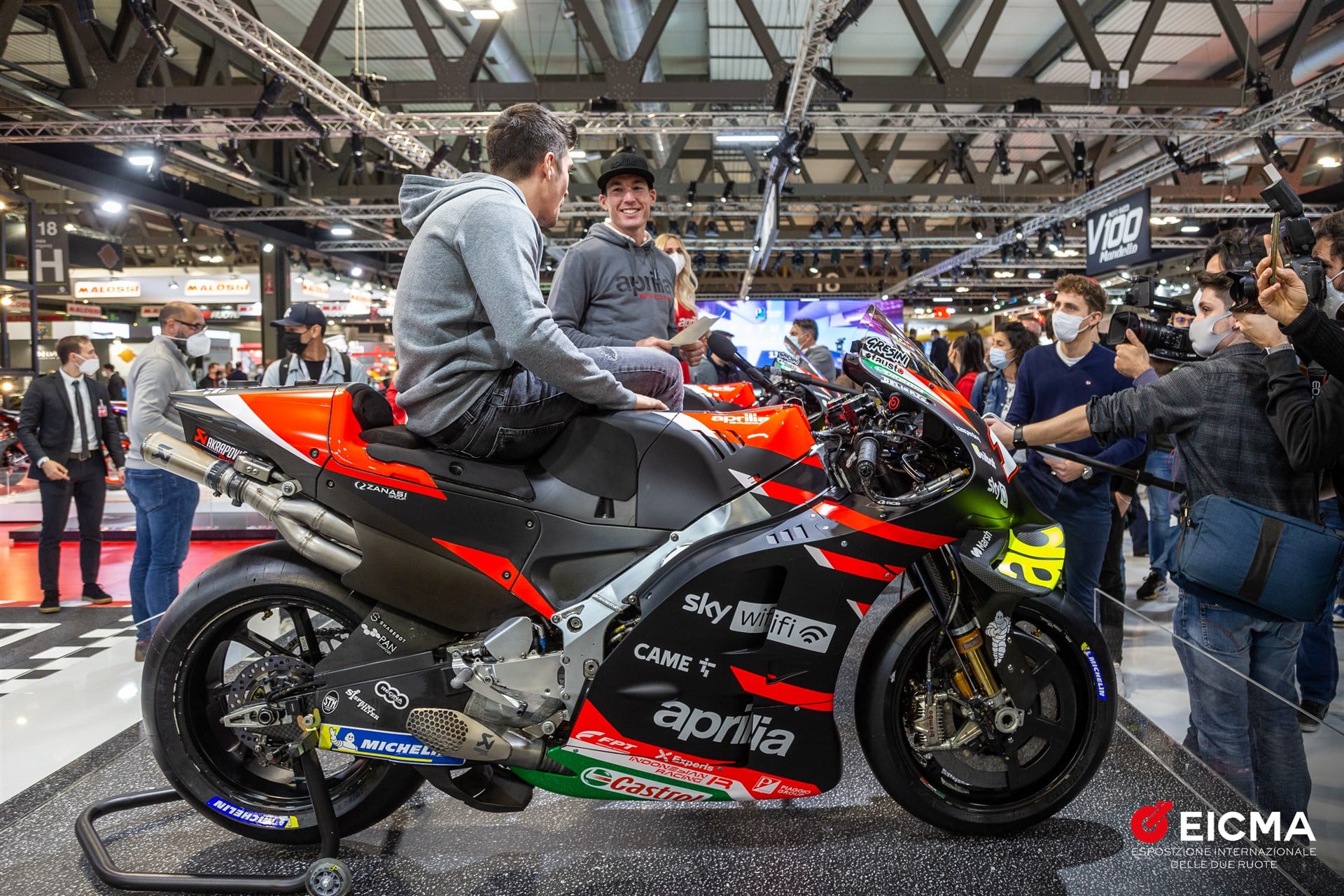 Journalist Guido Meda asked for a comment on the latest tests in Jerez from Romano Albesiano, Technical Director of Aprilia Racing: “We did a lot of testing and the 2022 bike will be a mixture of everything we tried, with extended potential, I'm optimistic. This year we marked great growth of the project, of the team, and of Aleix bringing home good results - and now Maverick. Over the winter, we need to put all the changes together. We need to move forward and choose the options for growth without making any mistakes. We only have a few chances to test. And Savadori deserves a round of applause for hanging in there this year,” Albesiano concluded.

Meda also asked the MotoGP riders, “And what if your kids ask for a motorcycle?” Aleix (father of twins Max and Mia): “I’ll definitely give them a Vespa. I have one too. For the future, we’ll see... if they want it…” Maverick (brand new father to little Nina): “My daughter will do whatever she wants to, in complete freedom.” 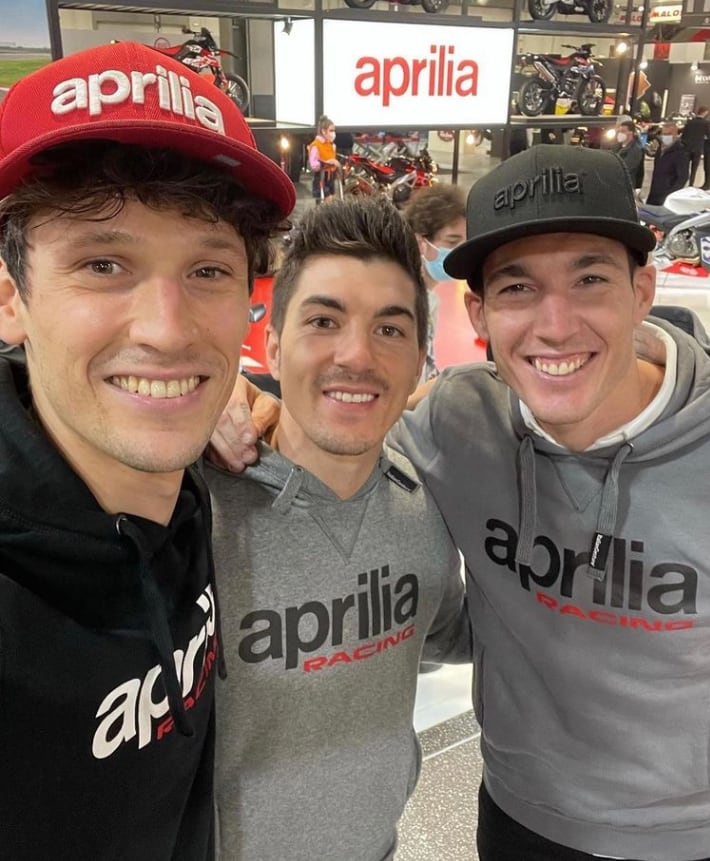 From the left, the Aprilia Racing riders at Eicma 2021: Lorenzo Savadori, Maverick Viñales and Aleix Espargaró. 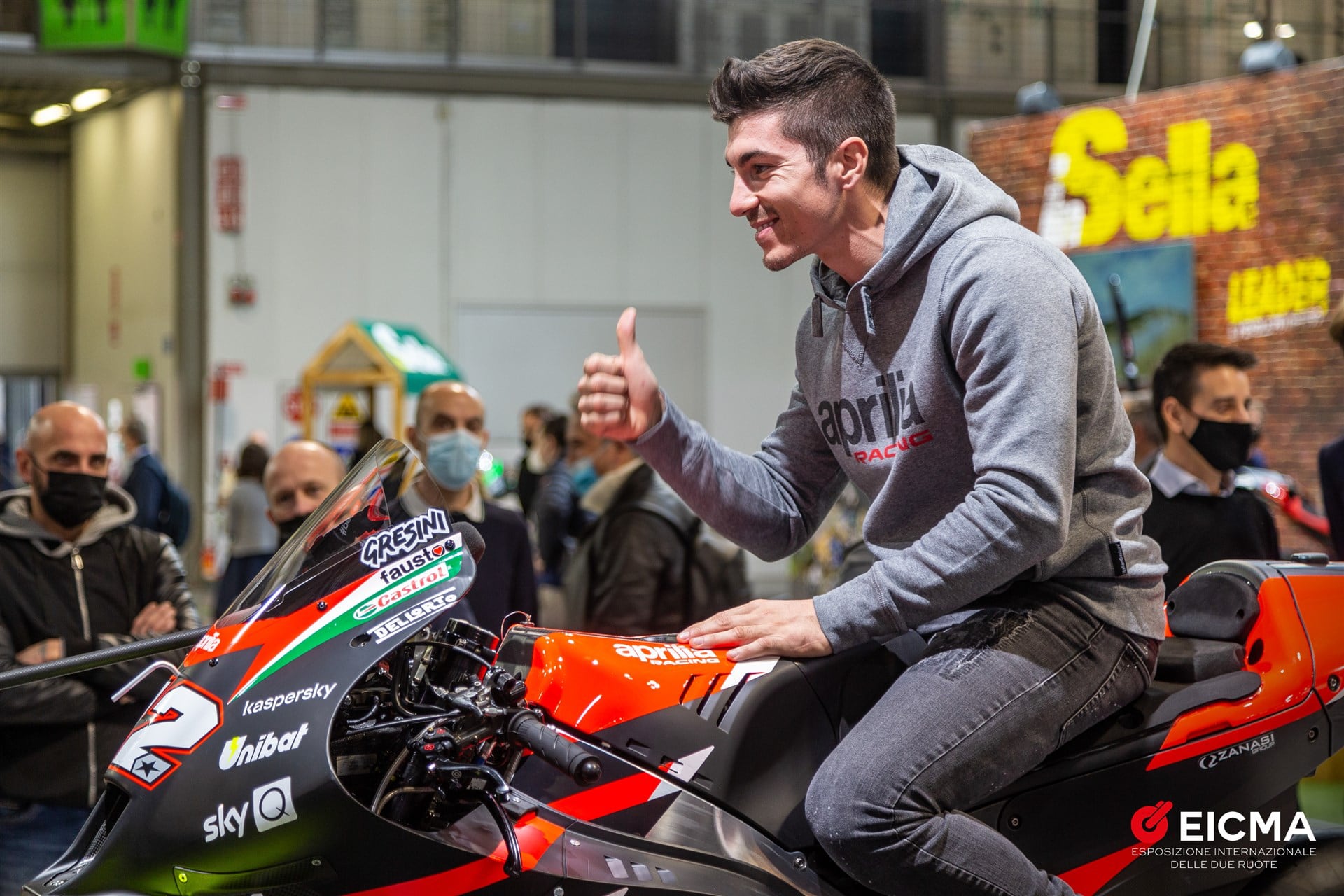