INTERNATIONAL MOTOR SHOWS: FROM VERONA TO CANADA, INCLUDING LAS VEGAS

APRILIA AND MOTO GUZZI AT “MOTOR BIKE EXPO” 2023, 15TH EDITION, AT VERONAFIERE (ITALY) FROM 27 TO 29 JANUARY. THEN ON TO THE “TORONTO MOTORCYCLE SHOW” AT THE ENERCARE CENTRE, FROM 17 TO 19 FEBRUARY

MBE 2023. Motor Bike Expo confirms its status as an attractive international stage in the world of motorcycling. Companies from all over the world are preparing for the 15th anniversary, from January 27th to 29th at the fair in Verona (Italy). MBE 2023 means 7 pavilions, 5 outdoor areas for a total of  100,000 sq m of exhibition space. 600 exhibitors, of which over 80 are foreign from all over the world – Europe, the United States, Indonesia, the United Arab Emirates, Taiwan, Turkey, China...

The most represented nation after Italy is Germany, followed by France and Spain… with companies and tuners from Austria, Great Britain, Greece, Norway, Netherlands, Poland, Portugal, Czech Republic, Romania, San Marino, Slovenia, Sweden and Hungary… In total, there are 35 different countries represented at MBE 2023 among brands, tuners, champions, pilots and celebrities.
Even the outdoor areas will provide entertainment: there will be over 50 shows and more than 100 events in the official program of the event.

Source of images and info: www.motorbikeexpo.it

Motor Bike Expo returns to its natural formula as an international event, confirming itself as a global reference point for the motorcycle market, with a strong sensitivity to customization, which is reflected in the different styles that make up the large sector of two wheels.
Visitors coming to Verona from all over the world will be able to admire incredible international premières, meet tuners and pilots, participate in various contests and attend breathtaking shows. Another peculiarity of MBE is to give all visitors the opportunity to buy accessories, components, technical and casual clothing, unique handcrafted items… a thousand temptations for motorcyclists and non-motorcyclists alike.

Aprilia and Moto Guzzi will welcome fans in the large stand under Pavilion 4 of Veronafiere with all the new releases in the 2023 bike, original accessories, apparel, and dedicated merchandising ranges. Other surprises await the public, expected to reach high numbers for MBE at Veronafiere: there were 170 thousand visitors at the previous edition in 2020.

THE MOTORCYCLE SHOW TORONTO 2023.Next stop – with all the 2023 new releases from the Piaggio Group brands: Aprilia, Moto Guzzi, Piaggio, and Vespa – under the care of Piaggio Group Americas, will be in Canada, at the Enercare Centre, Exhibition Place, in Toronto (Ontario), from February 17th to the 19th.
Info:
www.motorcycleshows.ca/2023/01/19/toronto-motorcycle-show-enercare-centre-february-17-19-2023

The Canadian Motorcycle Show is an “itinerant” trade show event, held at multiple stops in the major cities, planned for Toronto and Montreal this year. It is organised by Power Sport Services, a subsidiary of the Motorcycle & Moped Industry Council (MMIC), and by Canadian Off-Highway Vehicle Distributors Council (COHV), which represent the sector in Canada.
Info: www.motorcycleshows.ca

Source of images: twitter.com/thebikeshows
In the photo on the right, the Piaggio Group exhibit area at the previous edition of the Motorcycle Show, February 2020, in Montreal. 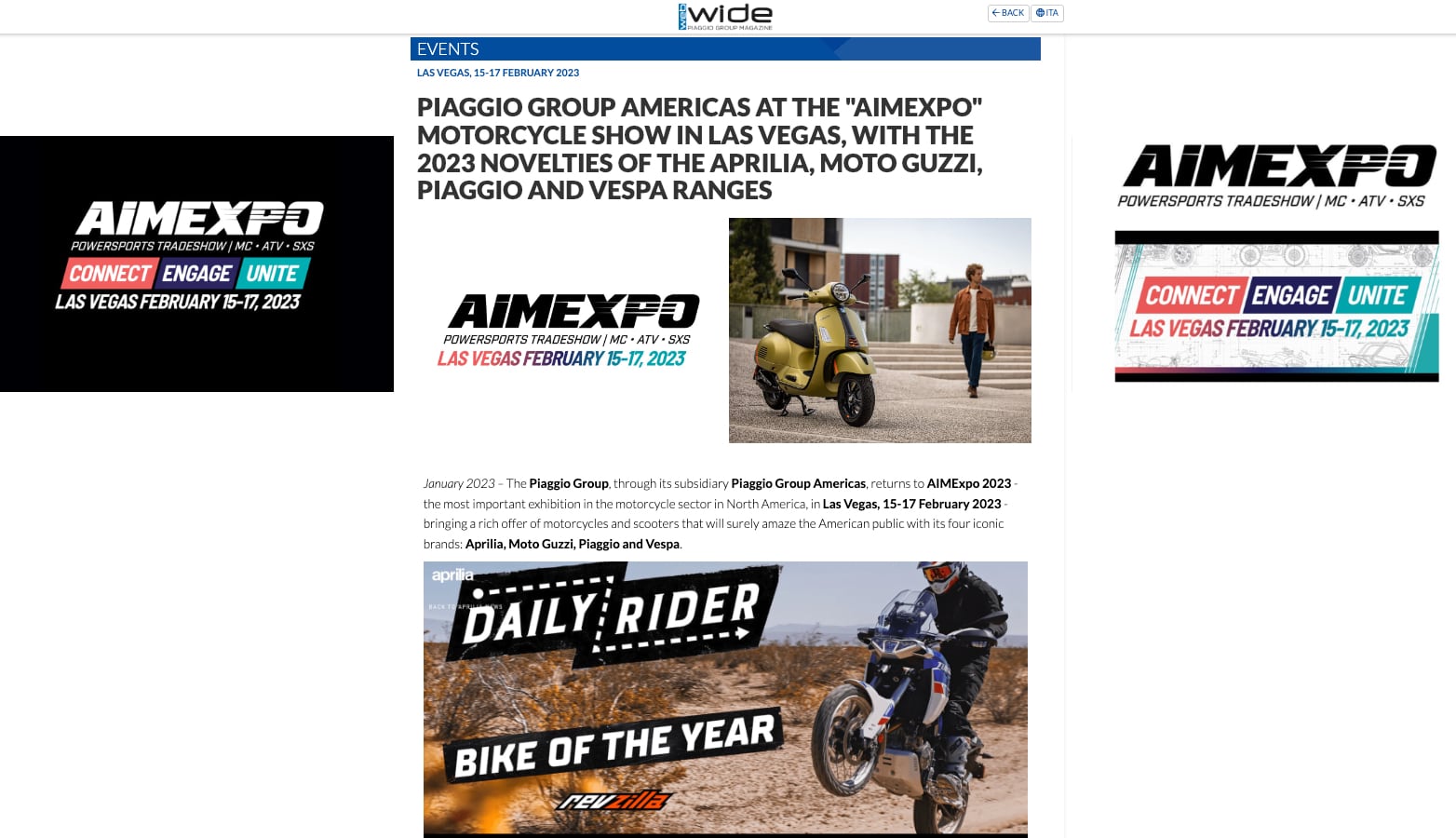